The Nürburgring truly is a special place. Nowhere else in the world can you turn up at 17:30h after work and go for a quick blast along a 20km. winding racetrack. It doesn’t matter if you are driving a ’90s Micra or the latest Lamborghini. As long as it has wheels and it drives, it is welcome at the ring. 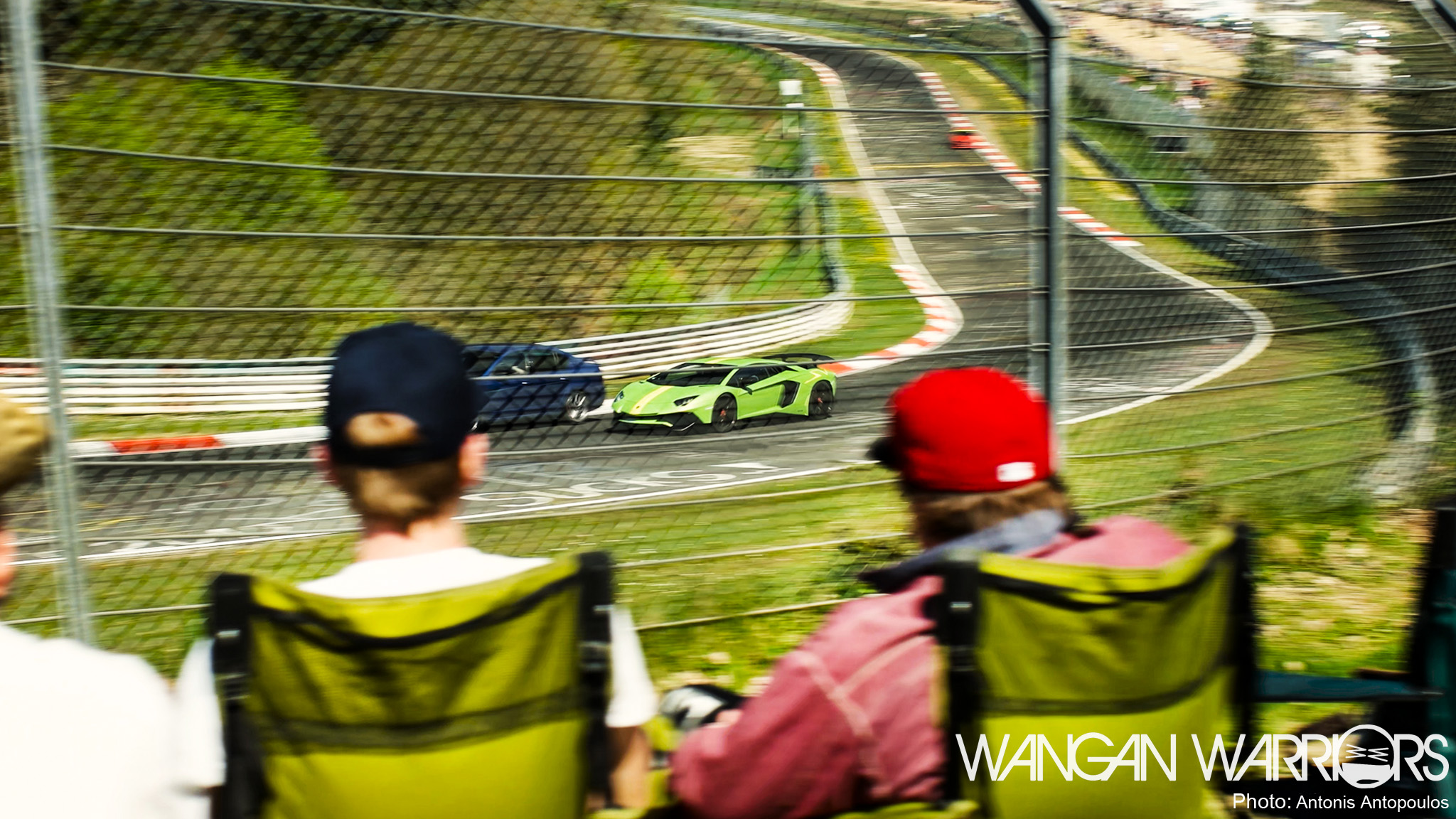 Thanks to this all-inclusive attitude, the Nürburgring has become a must-go destination for petrolheads all across the world. And on any given (sunny) day you are always bound to come across some rare, special and amazing cars driving on and around the Nordschleife. 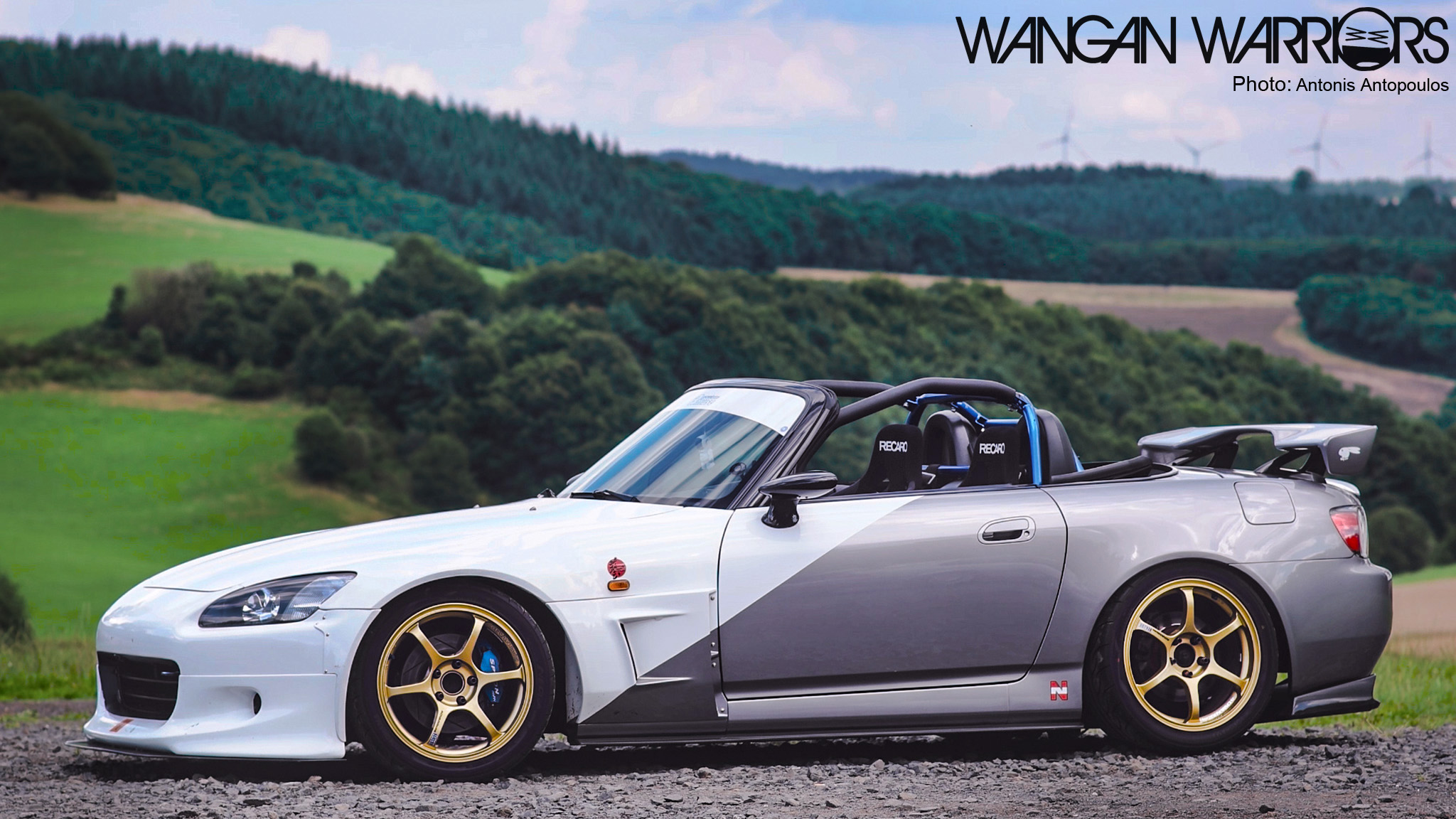 My latest visit to the Nürburgring was no exception as I happened to bump upon a rather special S2000 chilling at the parking area near Brünchen.
As I drove by I couldn’t help but keep on looking at the S2000 and its many, many little details and modifications. 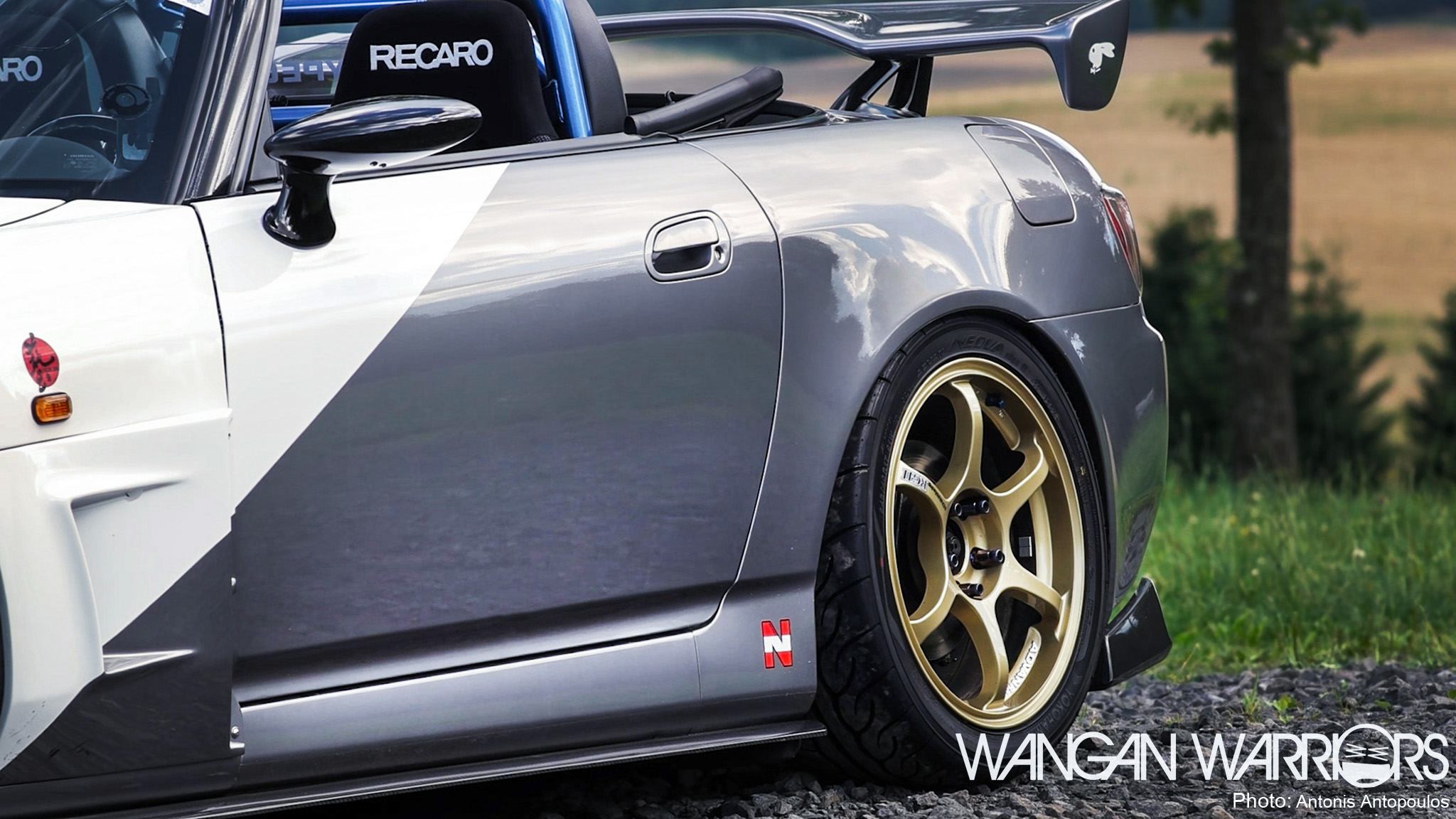 After I shortly introduced myself to Andy, the owner, and showed my genuine interest in his car, he was happy to tell me more about the specs and let me have a closer look at the S2000. 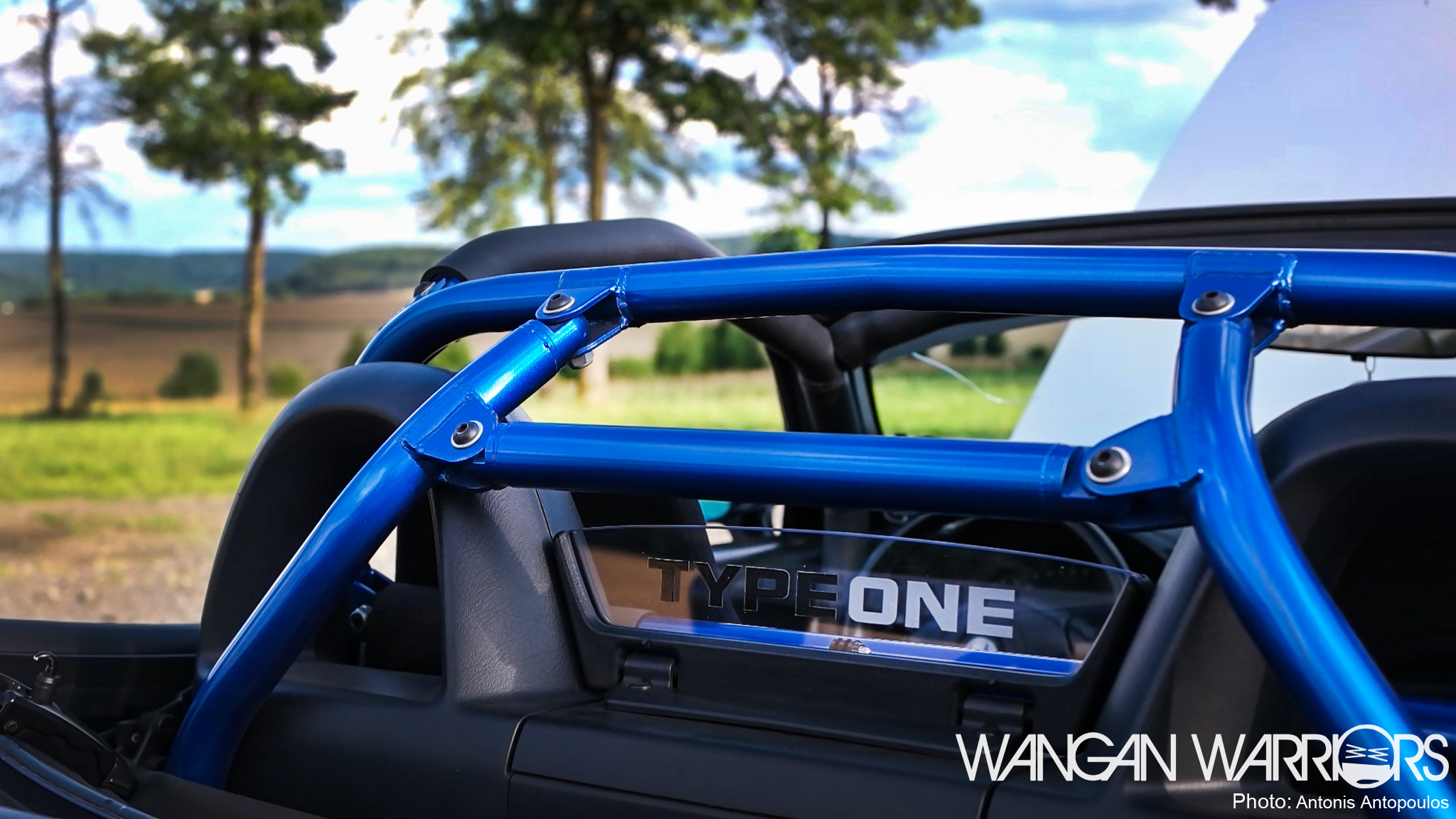 As it turns out Andy has had his S2000 for almost 10 years now, which to my standards is a rather long time in car ownership. As a young kind his father would frequently take him to the DTM races at the Nürburgring where the old e30 M3’s and Mercedes 190E Evo’s would be blasting down the track revving out their 4 cylinder engines. It was there and then that Andy developed a love for motor racing and high revving N/A engines.
So years later when Andy was looking for a new sportscar the Honda S2000 seamed to tick all of the right boxes:
– RWD ✓
– 240hp from a 2liter ✓
– 9.000 rpm ✓ 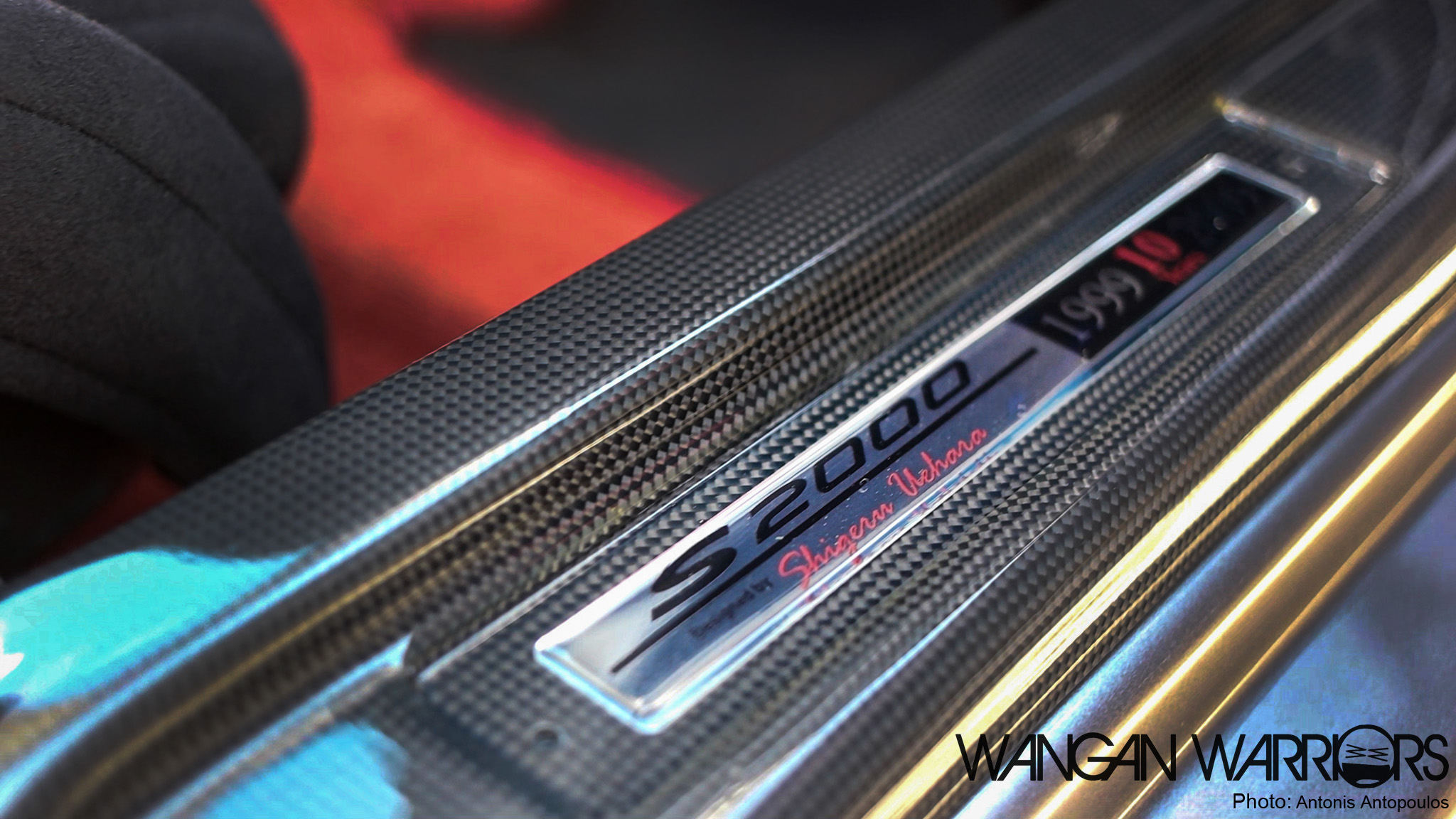 When he first got the car it came as a bone stock AP1 with barely any km’s on the clock. It was his second car ever to own and his first rear wheel driven car, so for the first year Andy took his time to learn the car and drove it around as much as possible. Soon after that year the first modifications started rolling in. The OEM shocks were the first ones to go out in favor of the highly praised KW V3 coilovers. After which numerous other modification followed, resulting into the track weapon we see today. 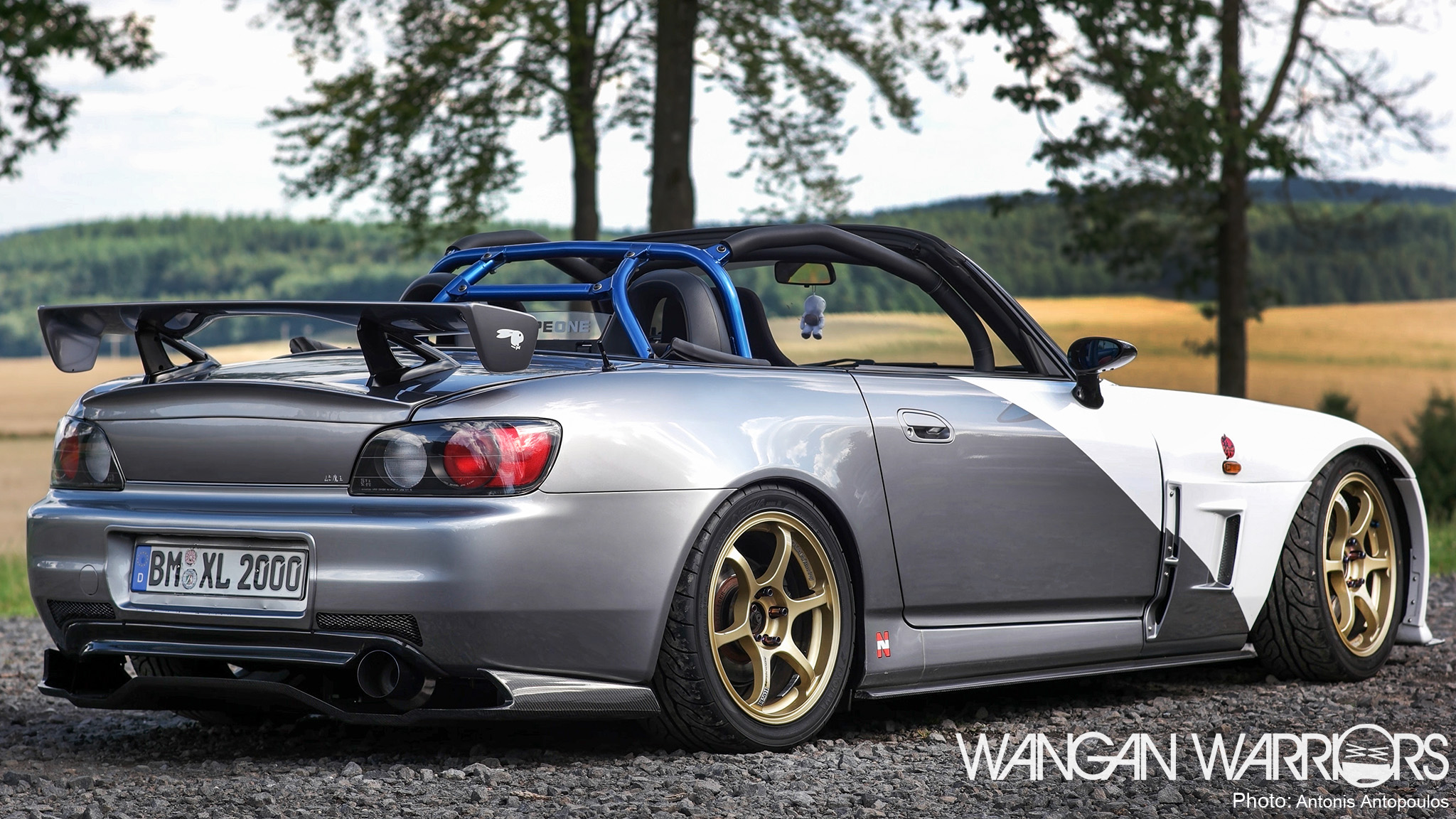 The front of the S2000 features a J’s Racing front lip, a custom made APR front splitter (modified by APR themselves to fit the J’s racing front lip) , a pair of J’s Racing FRP wide fenders and a custom titanium tow hook designed by Andy himself. 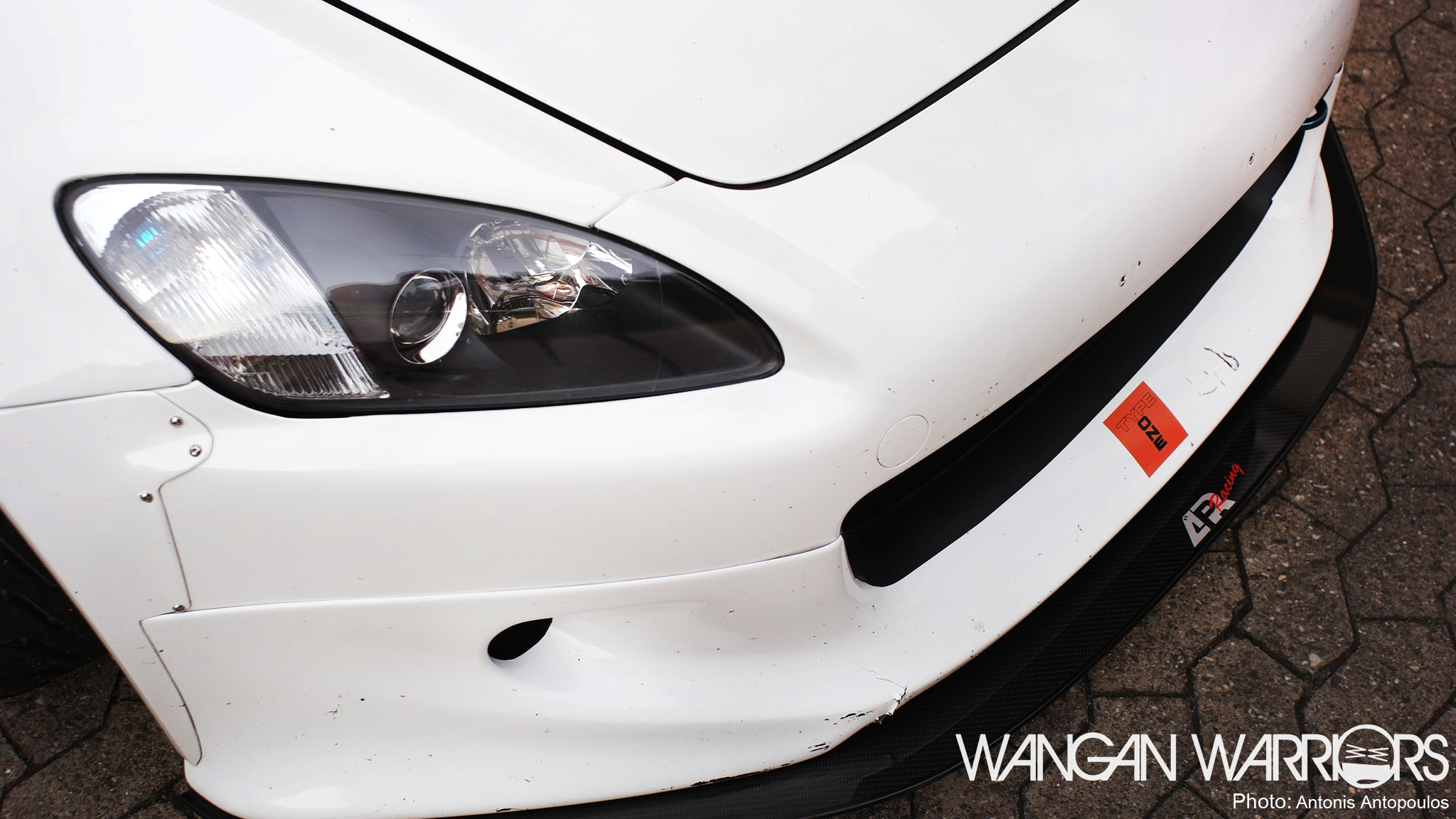 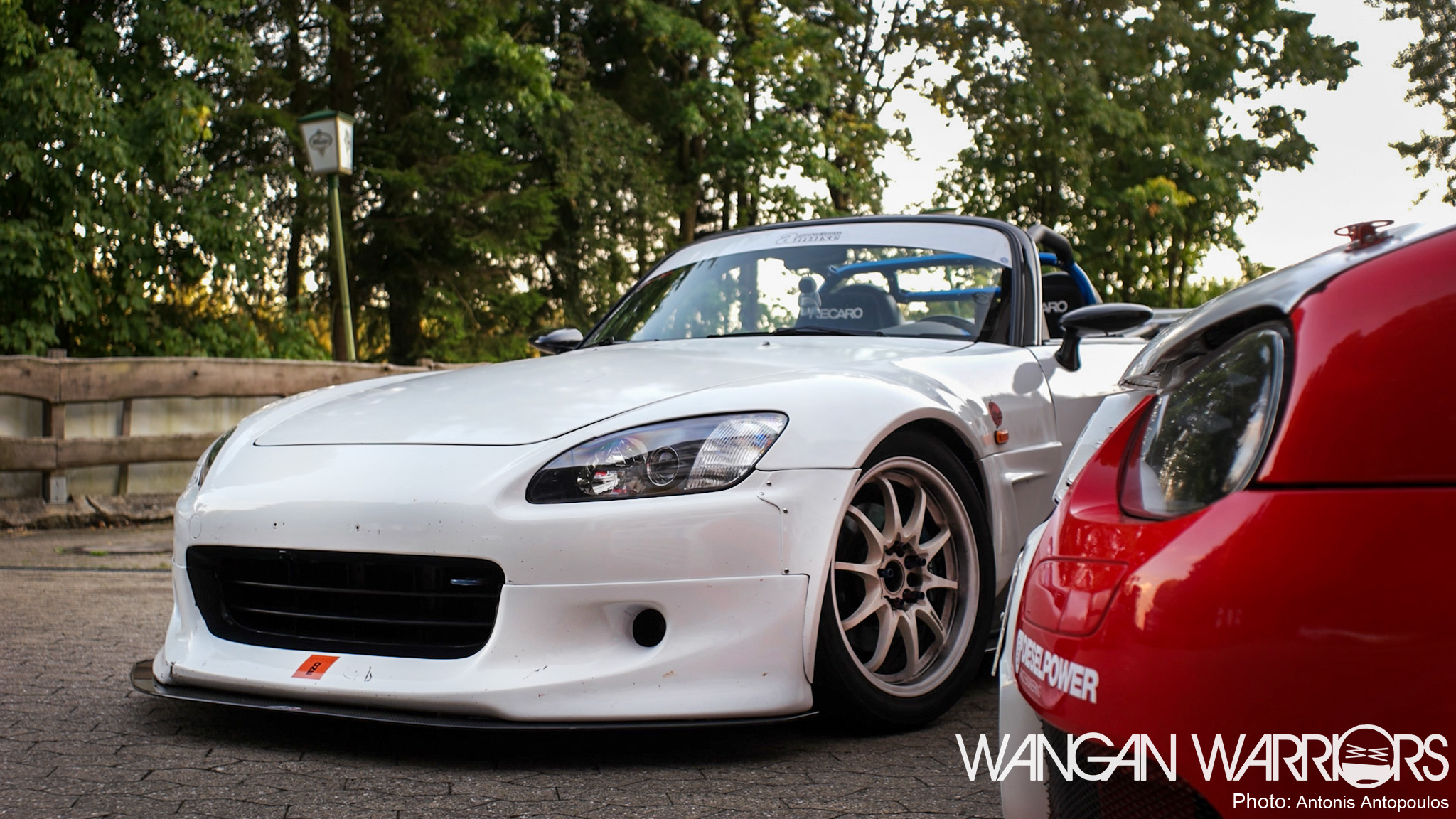 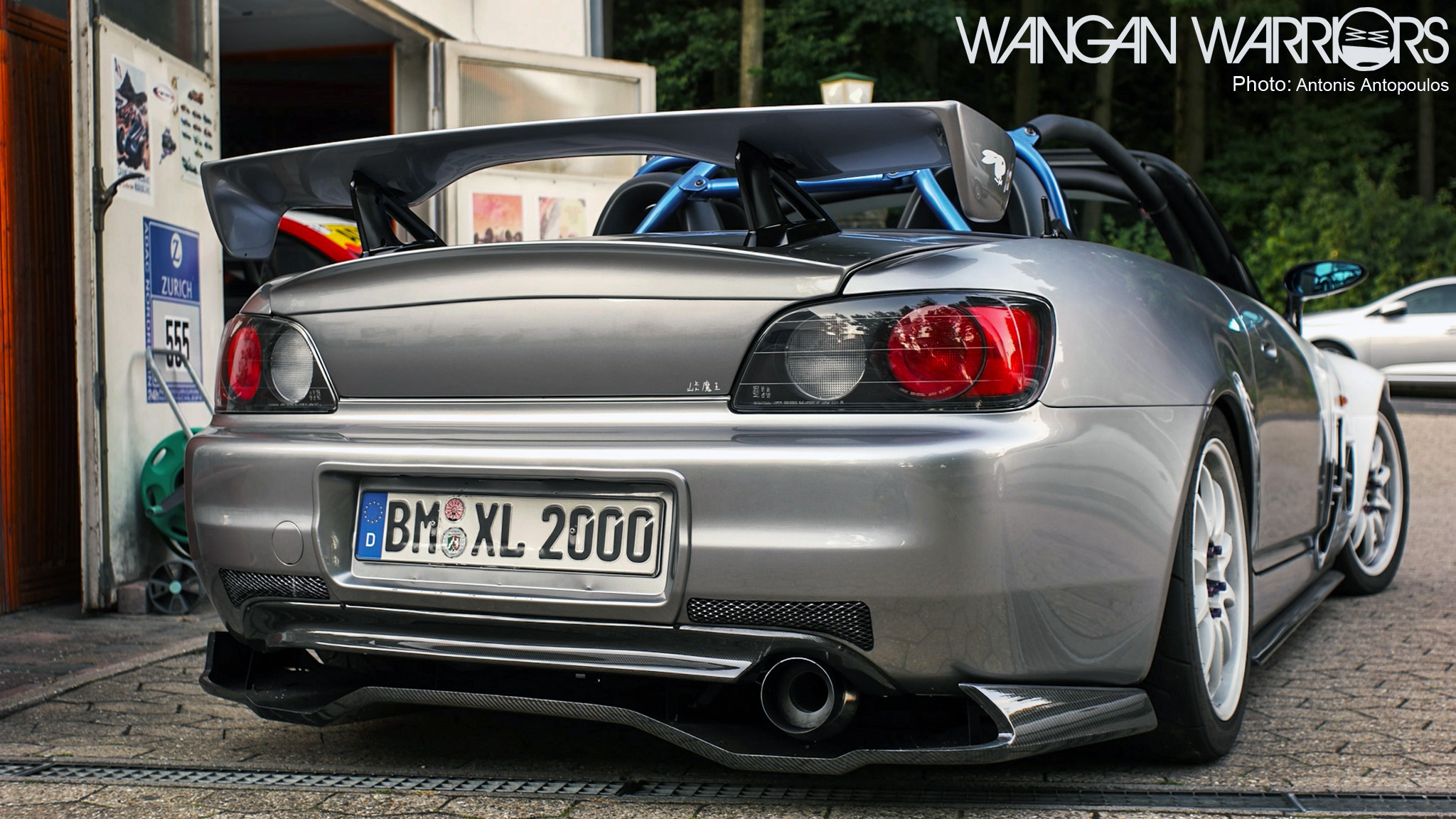 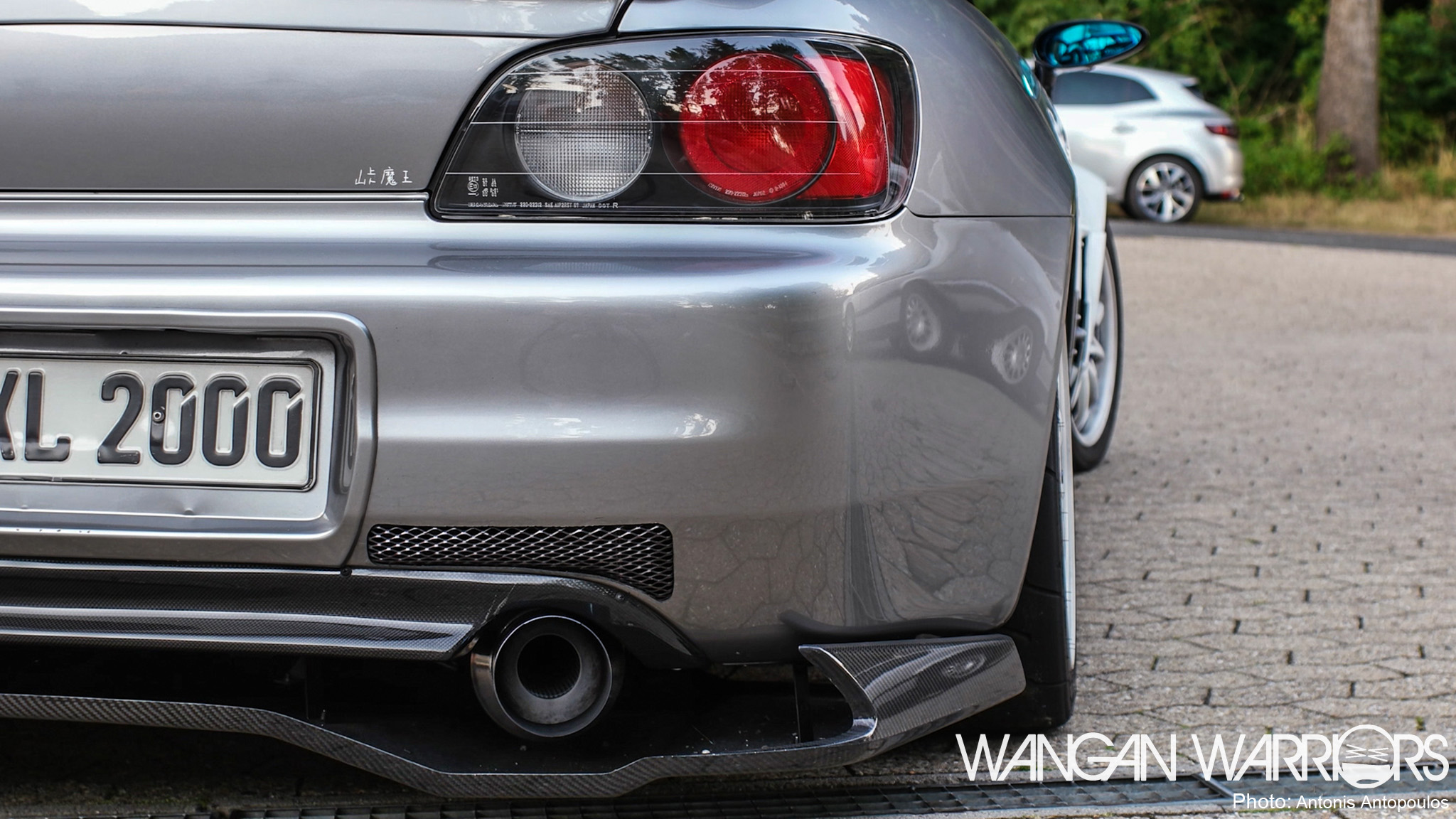 As for the wheels, brakes and tires Andy runs a set of Advan RGII wheels on Yokohama AD08 rubber for the streets and a set of Volk Racing CE28 wheels wrapped in Toyo R888 semi-slick tires for the track. The front brake callipers have been replaced by 4 piston Spoon callipers together with the Pagid RS29 brake pads and project Mu disks. The rear brakes are standard apart for the EBC Yellowstuff pads.
According to Andy this setup works great both on the road as on track with no fading even after consecutive laps on the Norschleife. 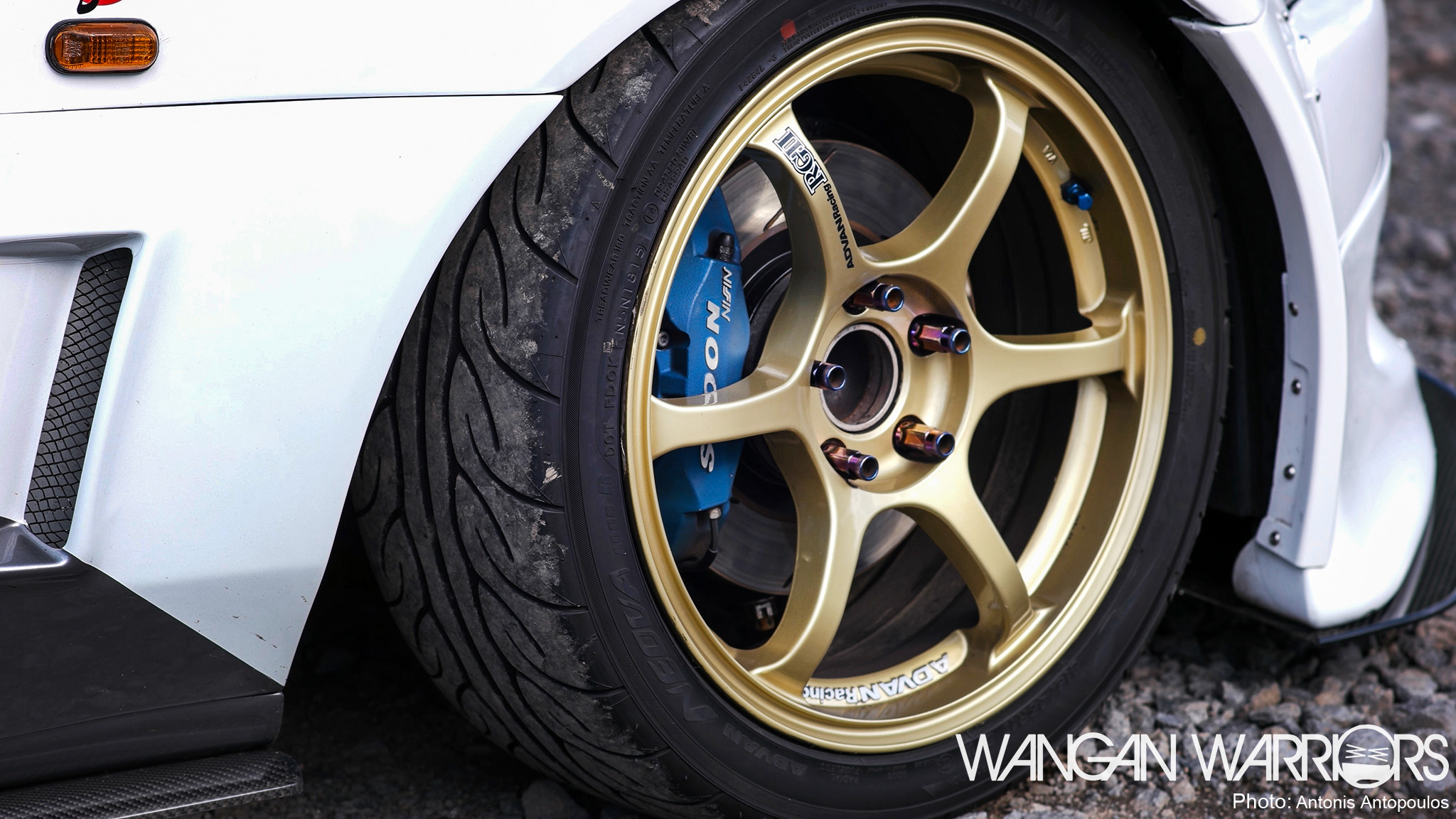 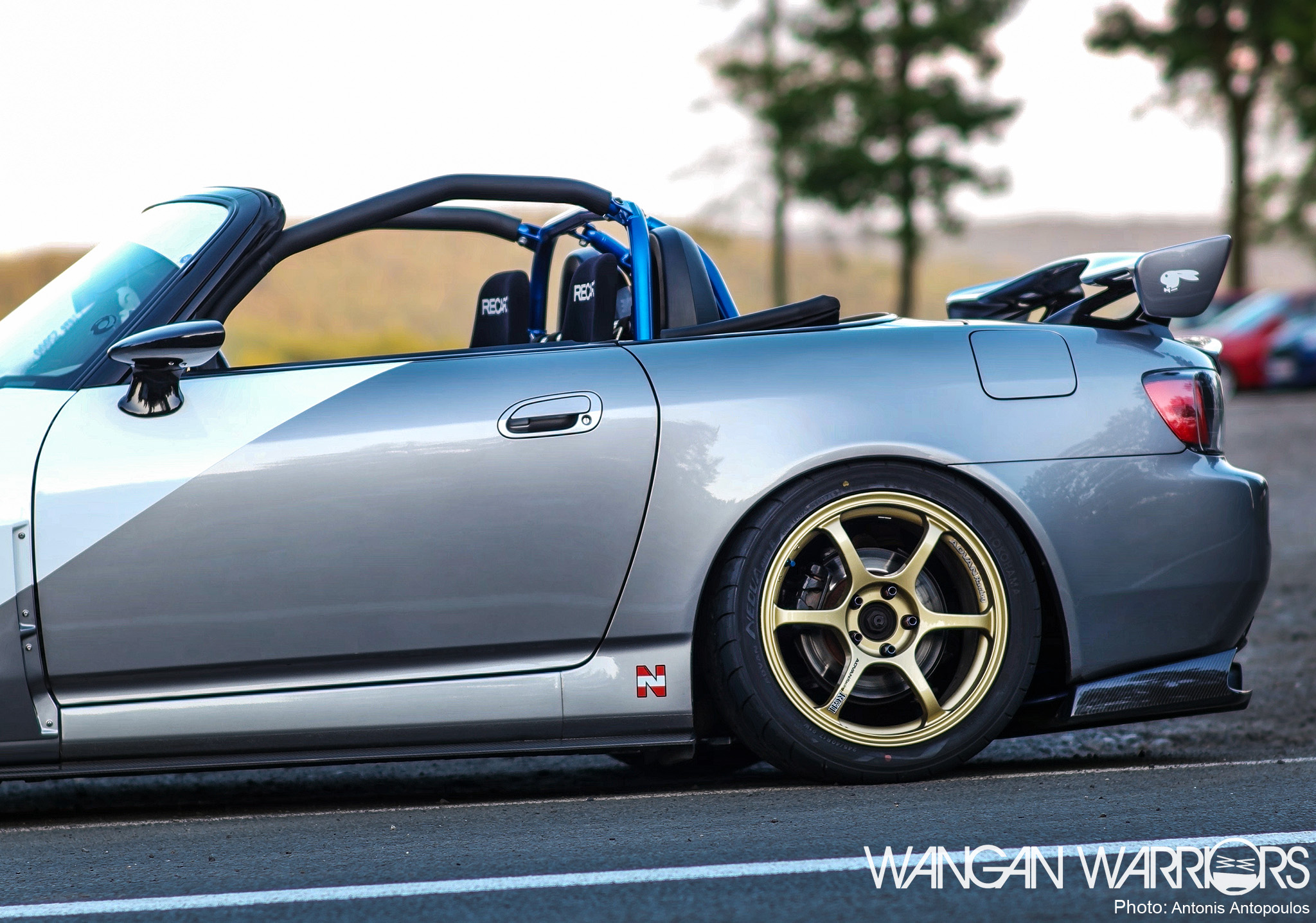 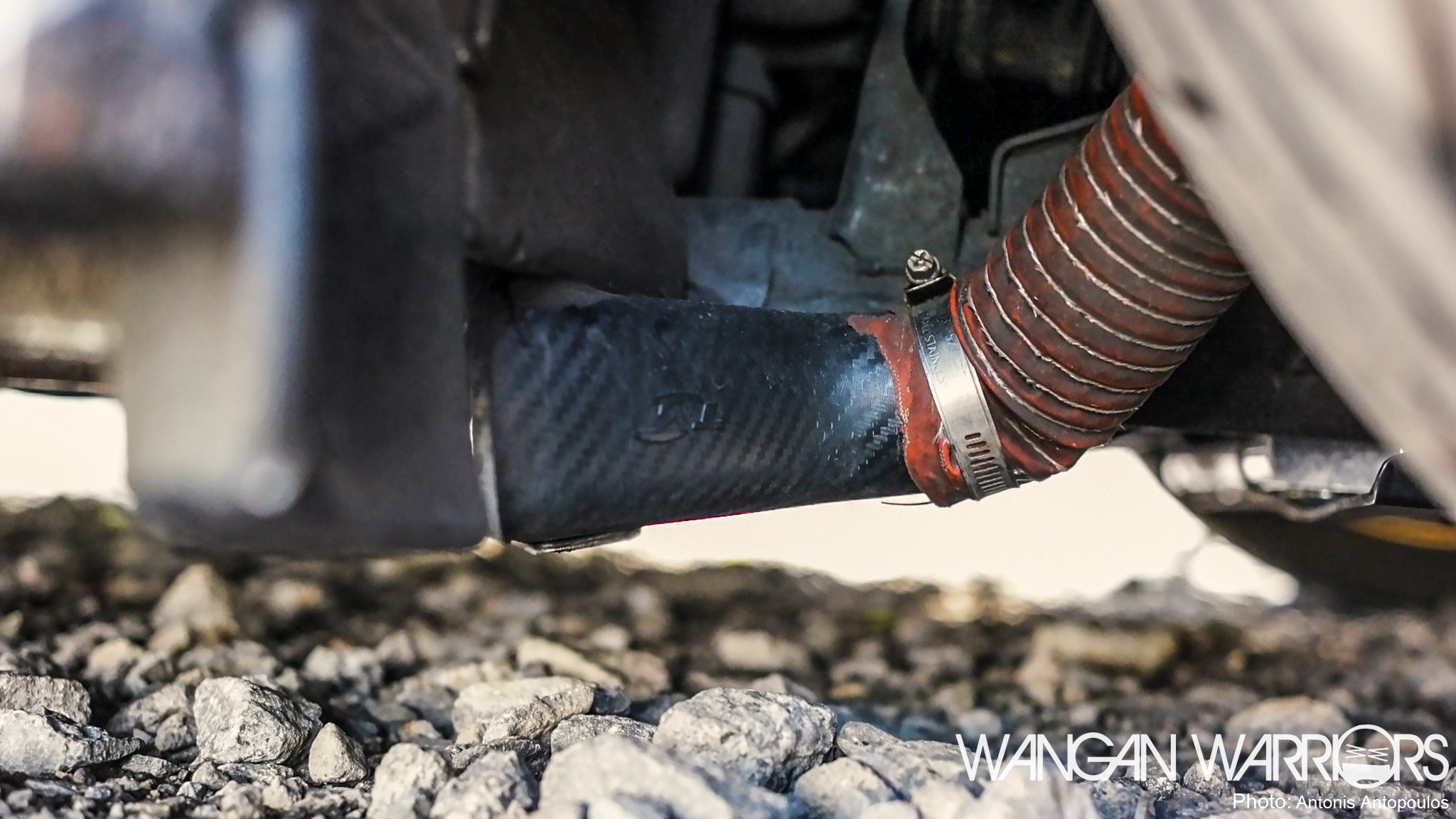 Onto the engine then, the F20c from Honda is know to be highly tuned in stock form already and actually responds rather bad to aftermarket tuning parts. Coming fully forged from the factory and pushing 240hp (250hp for the Japanese cars) out of a 2 liter is quite the achievement for a production engine. Andy however didn’t have much luck with his first engine as it developed at tick, suspect due to running lean after installing the ASM header.
Instead of rebuilding the engine with the rather expensive OEM forged parts Andy decided to go the hardcore JDM route and ordered himself a blueprint F20c engine from Spoon’s workshop facility Type One. On the intake side the factory airbox is still in place as it does an excellent job of keeping cold air coming in and hot air staying out. While on the exhaust side the car is running the ASM header, HJS 200 cell cat, the Amuse R1 titanium exhaust and this time around an ecu retune to keep the engine hydrated on that precious high octane juice. 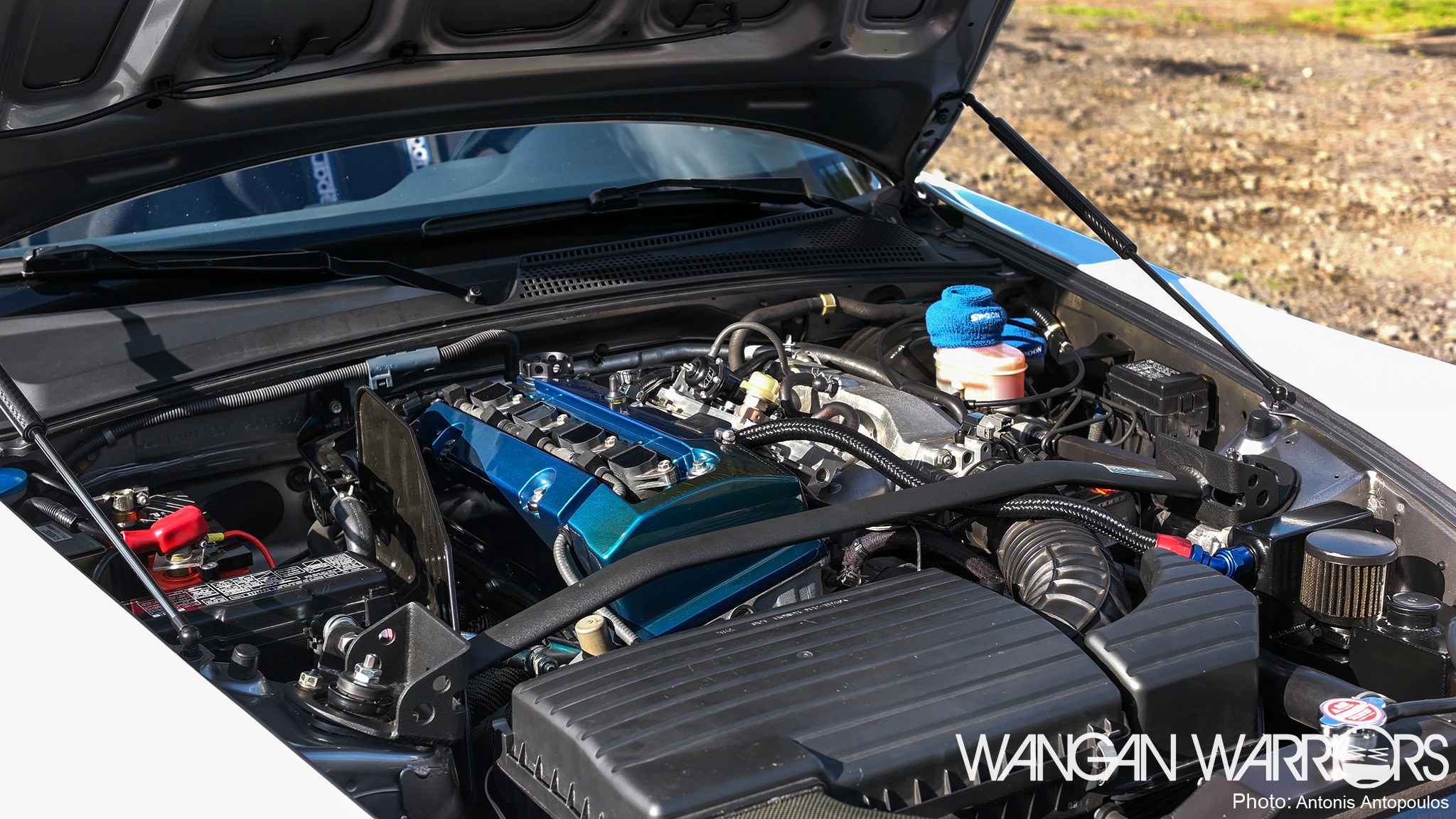 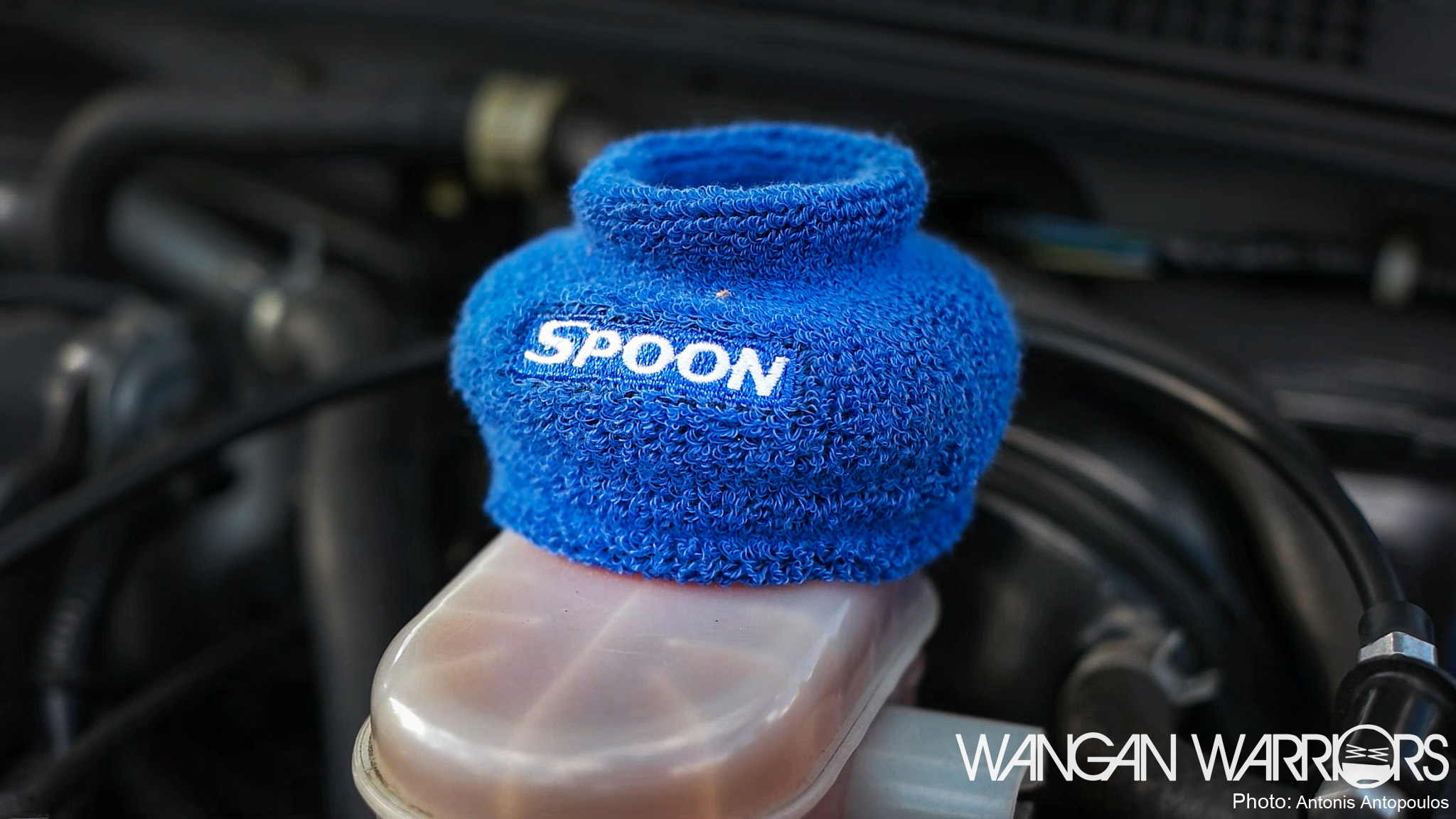 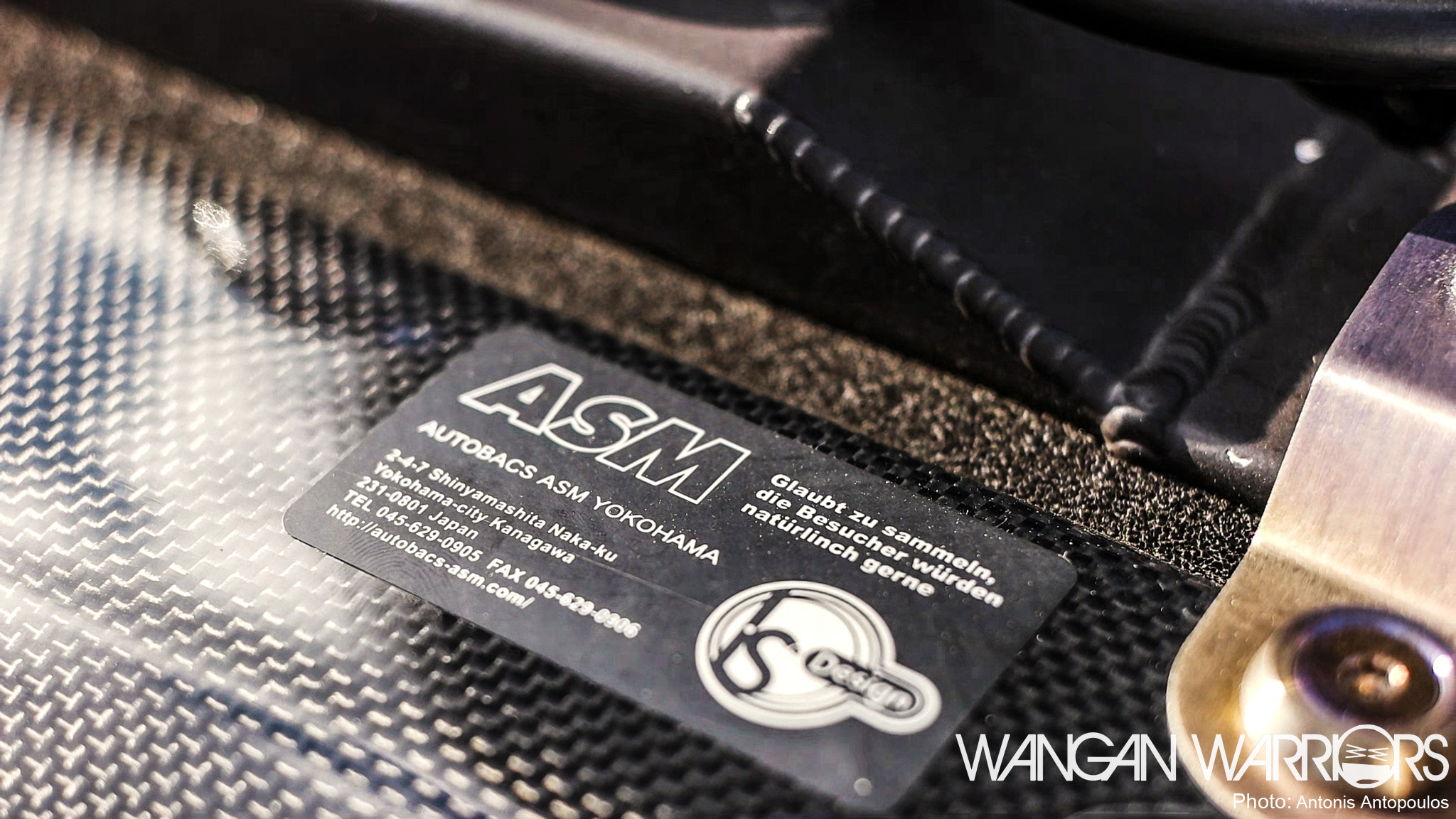 The interior of the S2000 also got its needed modifications done to it
however one big thing that didn’t get modified was the steering wheel. Andy’s answer to that was rather simple, he just likes the shape and feel of the standard S2000 wheel.
What did get changed was the complete center console for an updated version out of the CR model (including a CR radio cover signed by Spoon director Tatsuru Ichishima), 2 Recaro SPG bucket seats with Sparco harnesses, a Seeker shift knob, Cusco 8 point roll cage and a Defi Advance ZD digital gauge screen to keep the dashboard looking clean and tidy. 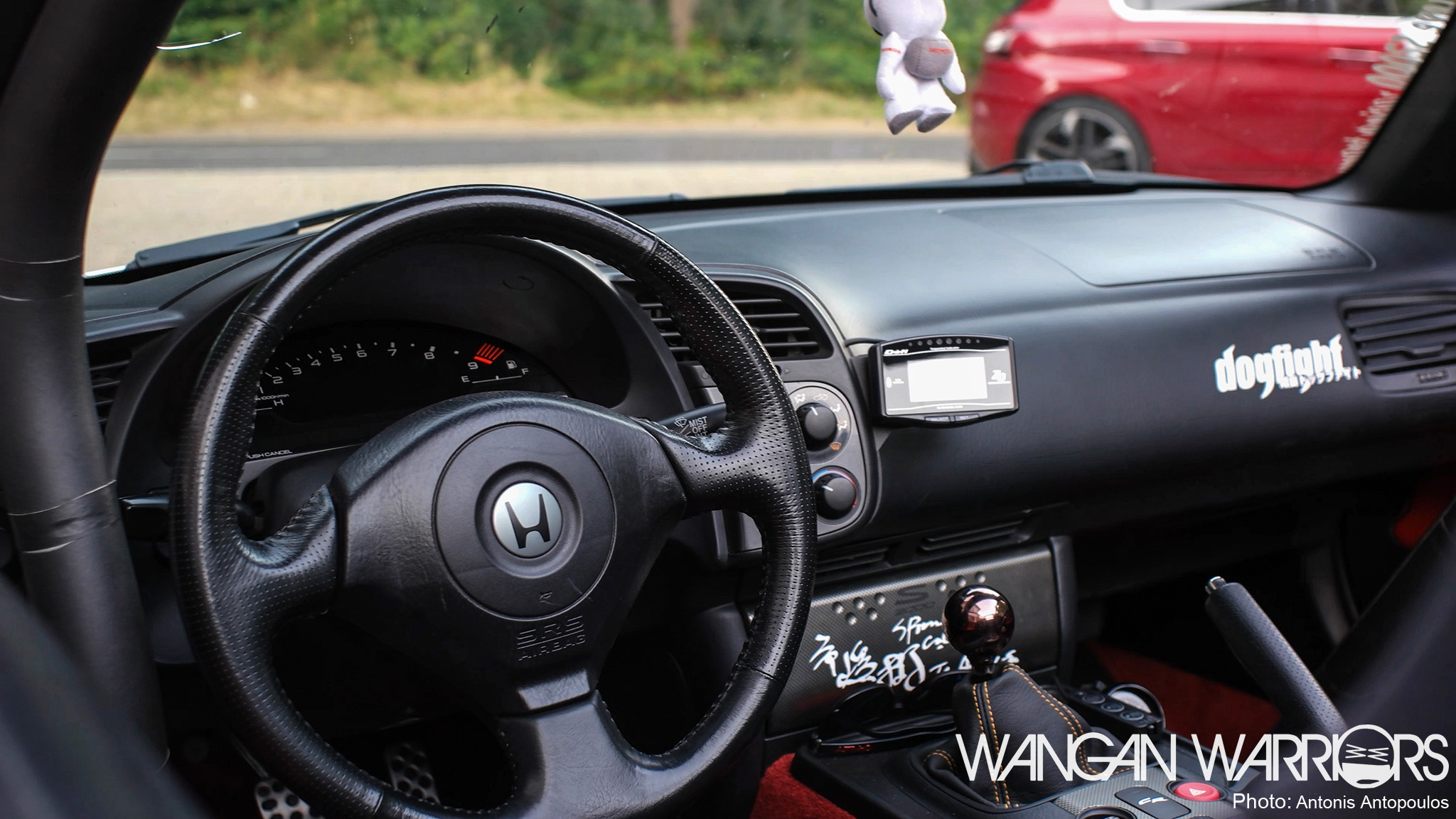 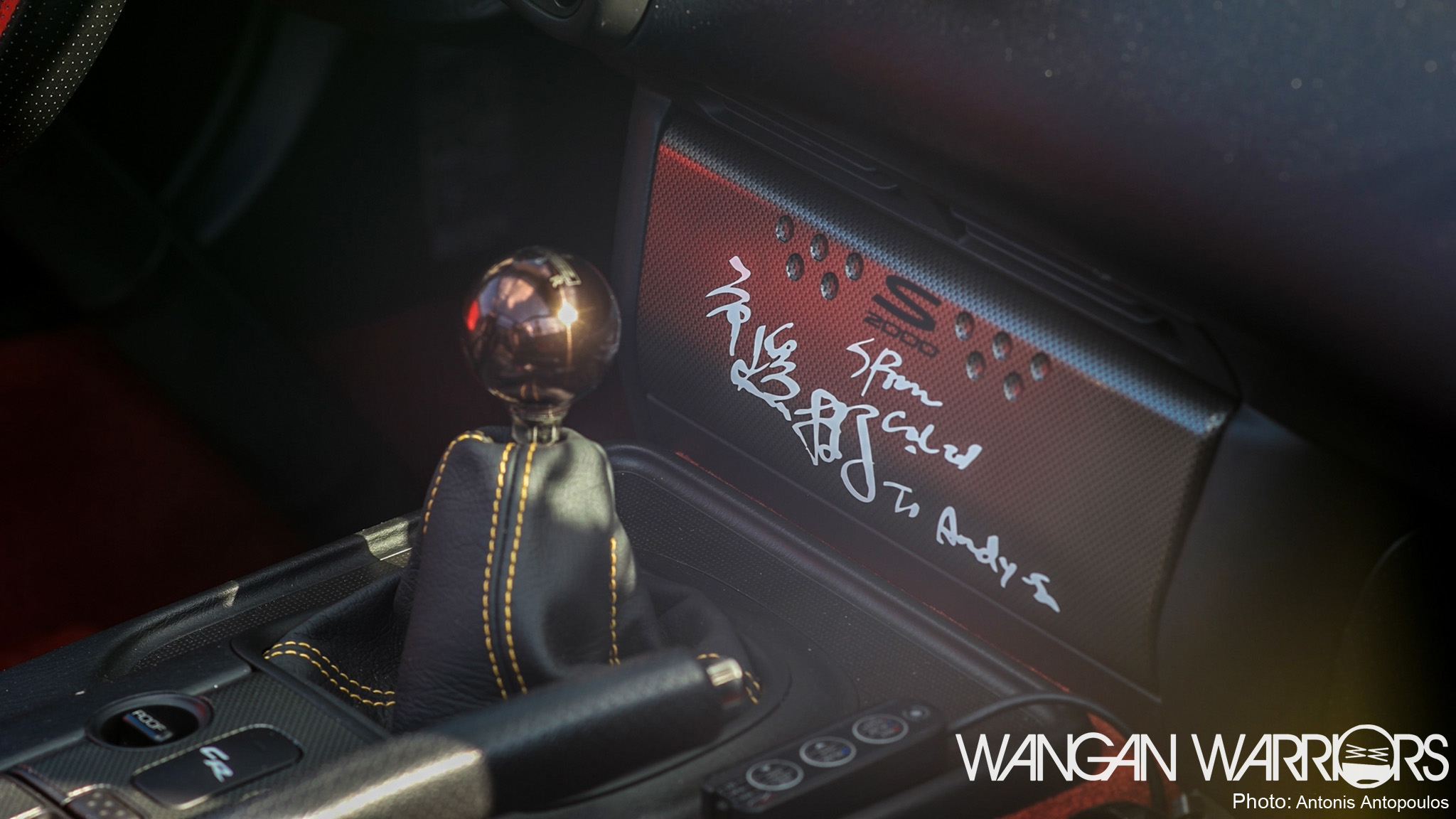 Looking at the long and extensive list of modifications the car has collected over the years one might think that this car no longer drives or feels like the S2000 it once was. On the contrary, Andy has tried to keep the spirit of the S2000 alive with every modification he has done. The aero of the car was carefully chosen to be functional rather then being there for the looks. The tire sizes have been kept OEM in favour of balance over grip. The engine is N/A and not boosted in order to keep the “pedal to the metal” driving style of the S2000 and prevent any possible heat and reliability issues boosted S2000’s may experience.

The car in its current form is very much an S2000 as the S2000 was intended to be by it’s designer Shigeru Uehara. An everyday car that you can drive on track, push it to it’s limits and enjoy every drive so much that it makes you appreciate every moment.

And after almost ten years of ownership Andy doesn’t seam to be planning on parting with the car anytime soon. He still enjoys his S2000 as much if not more than the very first time he got it and with plans of rebuilding his old engine into an ITB N/A monster we cannot wait to see and hear this car again in the nearby future.

So with that I would like to thank Andy for taking his time to not only show and tell me heaps about his car but also taking me for a ride on two incredible laps around the Nordschleife in his epic machine. <3 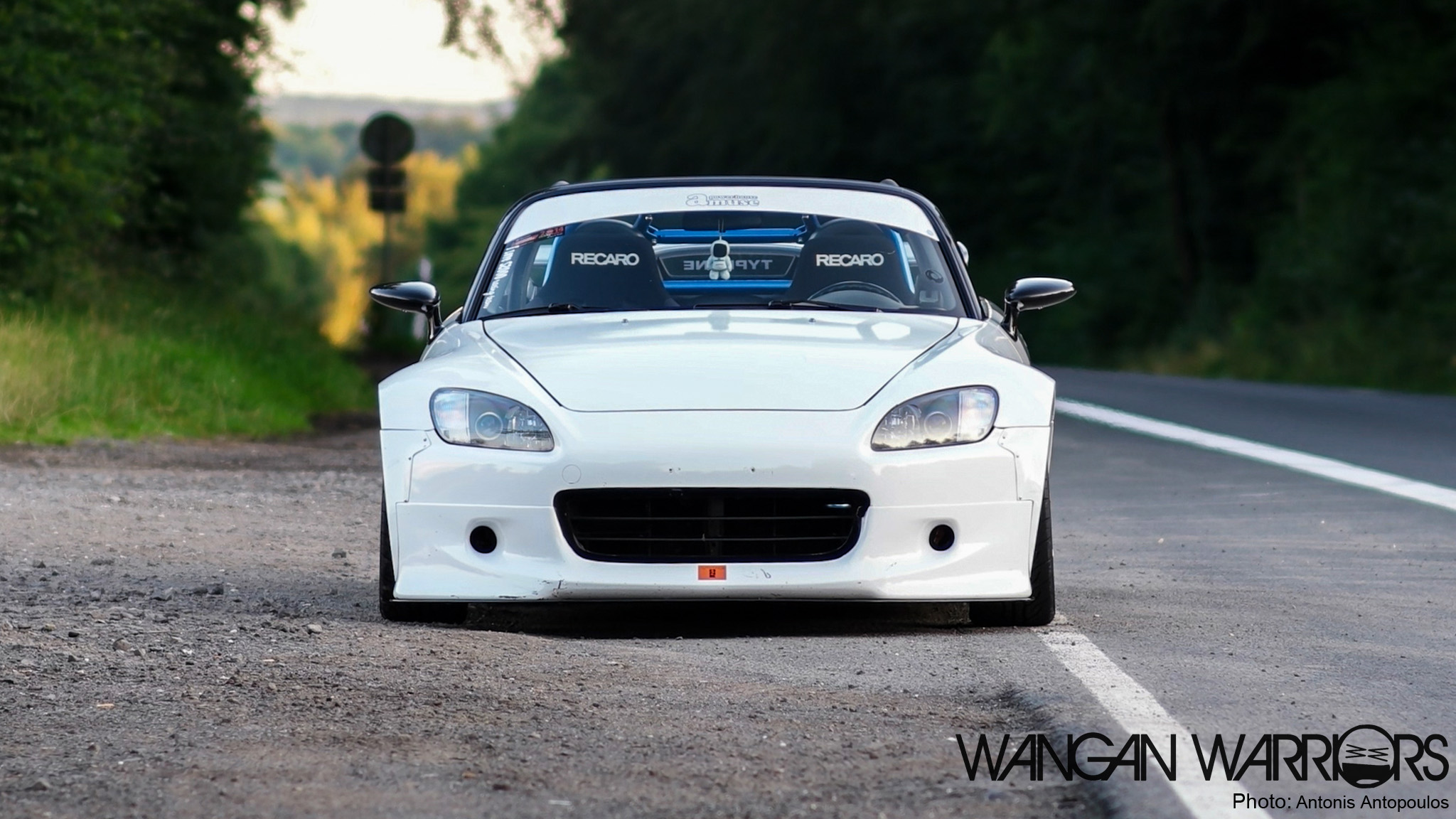 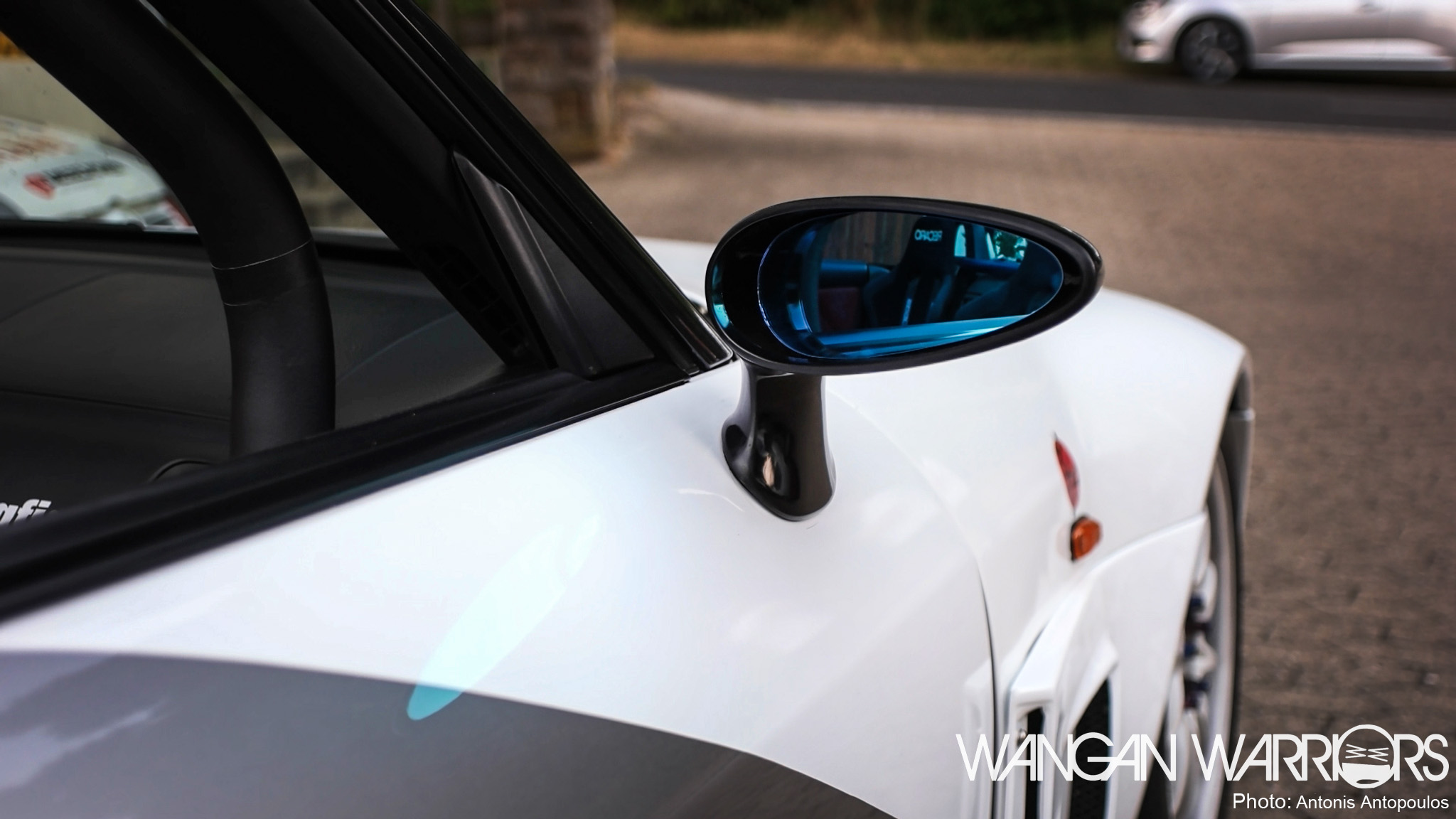 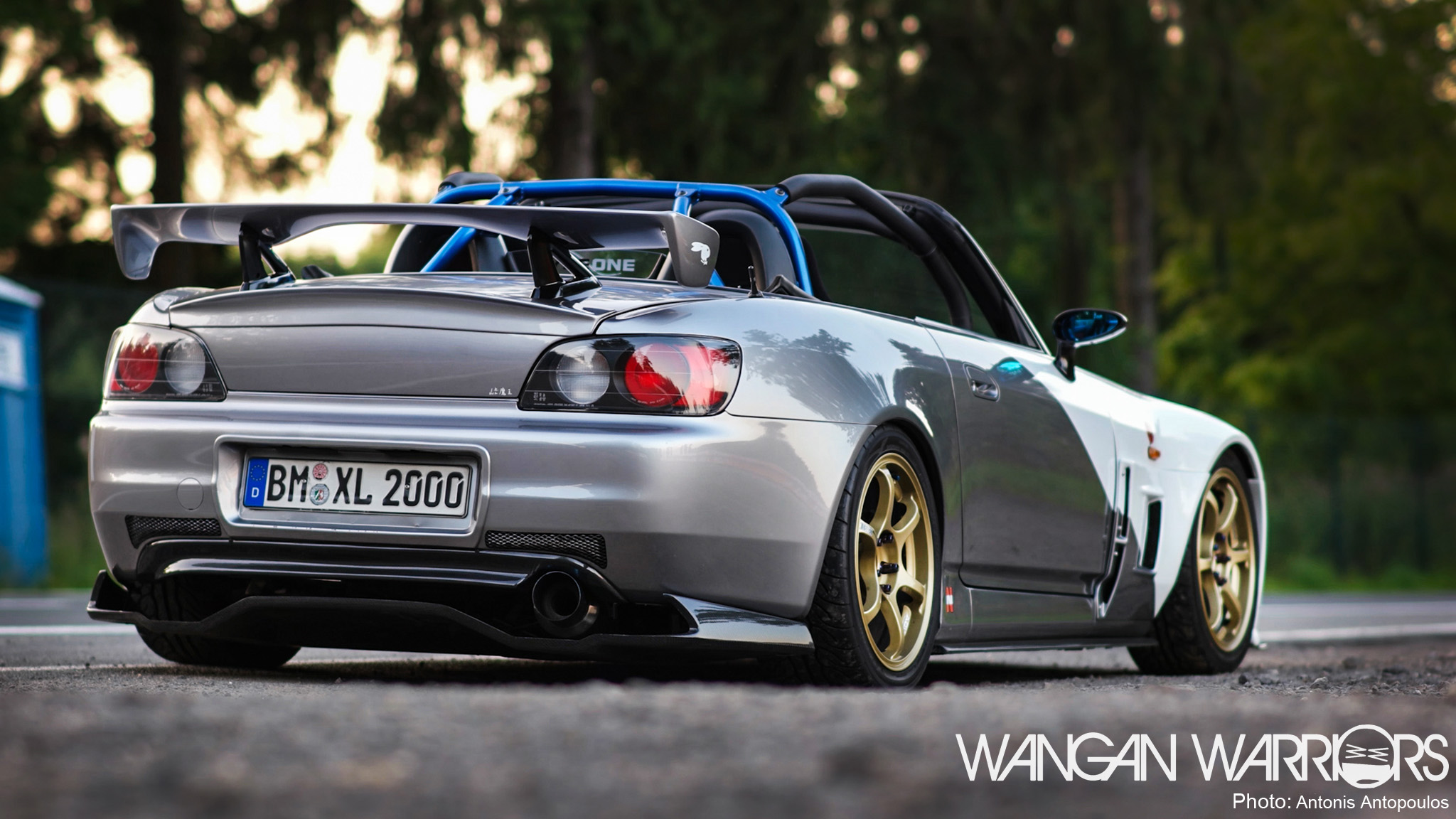 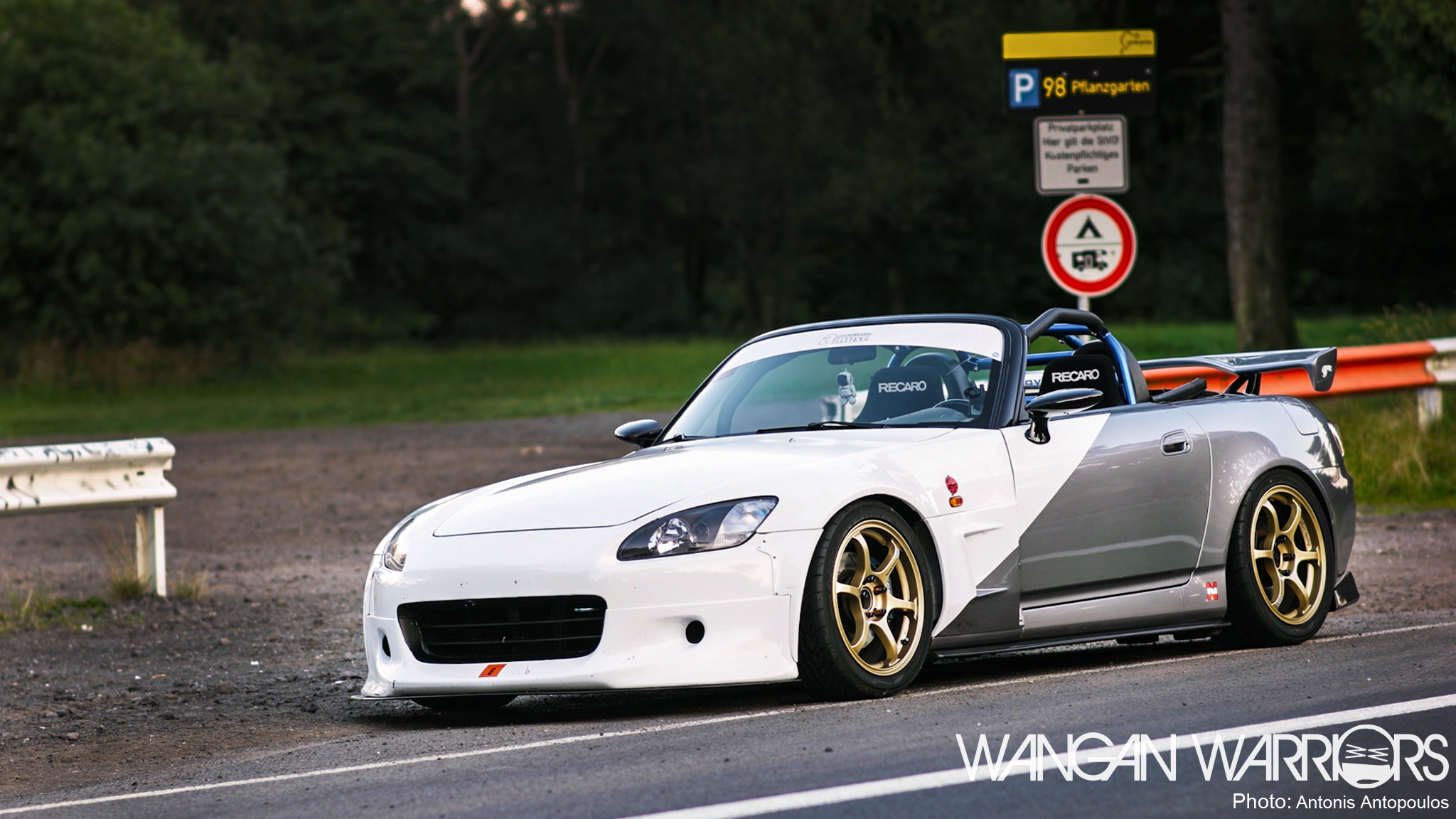 Andy would like to thank Go Tuning Unlimited for their help and advice in supplying the aftermarket parts and his friends at the RingHaus Hotel and Allard Motor Company for their help and hospitality.
And of course the passionate and innovative people at Spoon, J’s Racing, ASM Yokohama and Voltex for their continuous development and tuning of the S2000 platform.