It’s easy to agree that us gearheads consider cars or car-projects as art. I myself am absolutely in love with the Toyota GT86 and fortunately I got to drive one myself the other day at Co-ordSport. In the same week I got to photograph one as well at our End of Year meet in Oosterhout and this was a photoshoot which has been on my to do list for some time now. I got in touch with the owner Gunther Lamberts and and agreed that I would spend some quality time with his Toyota at the meet. 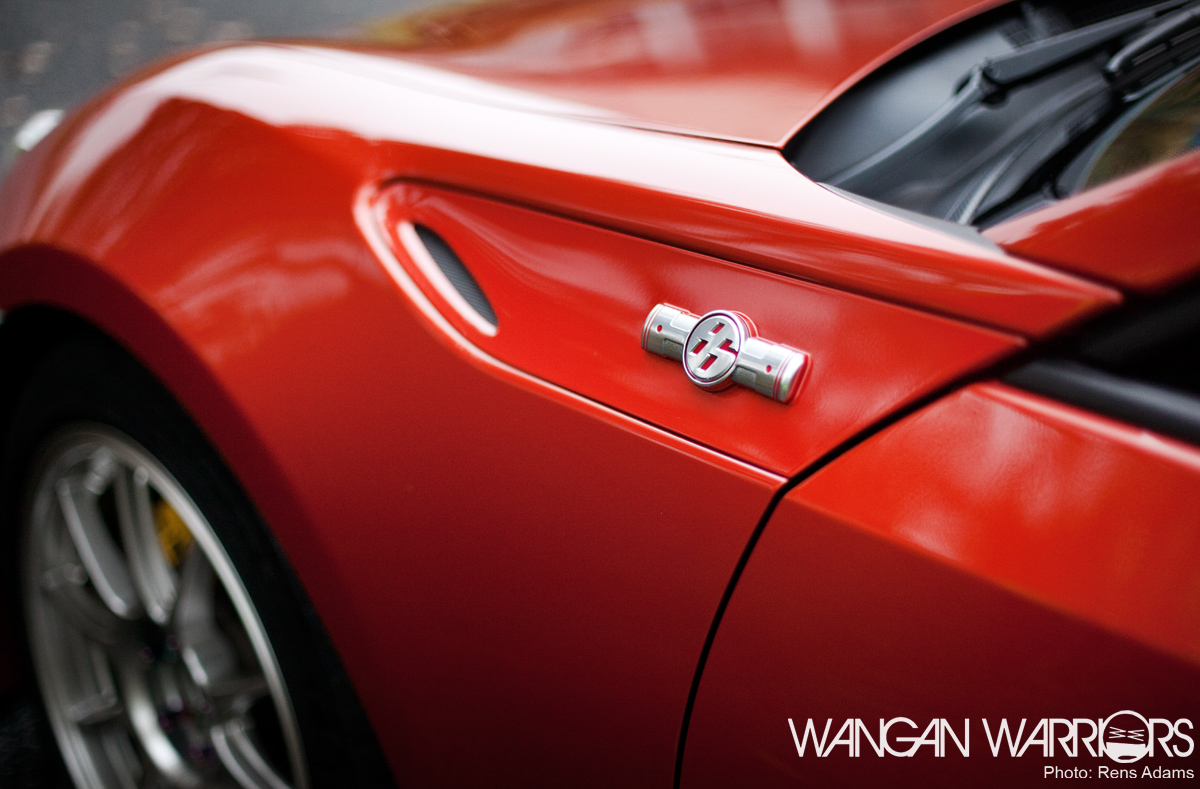 Since there were over 400 cars present at the event, it’s safe to say that it was not easy to find eachother very quick. I waited at his car for half an hour and was asked multiple times to get out of the way of other photographers. Yes, including the cellphone shooters! A while later I decided to walk around for a minute and quickly bumped into Gunther. 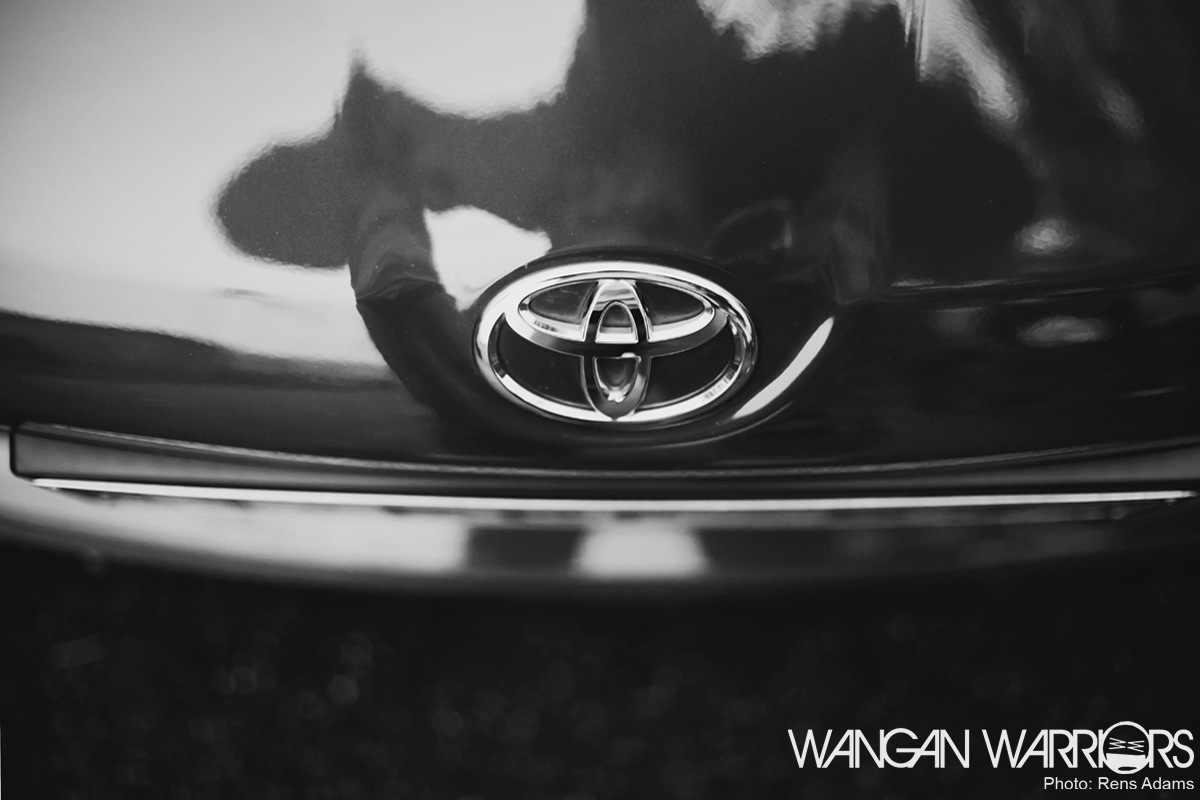 I’ll have to admit that it was a little stressful to do some sort of a car feature shoot at the meeting area. We had planned to do some little spotlight shoots just to provide us with a small supply of photographs to use for facebook and short articles for the blog. 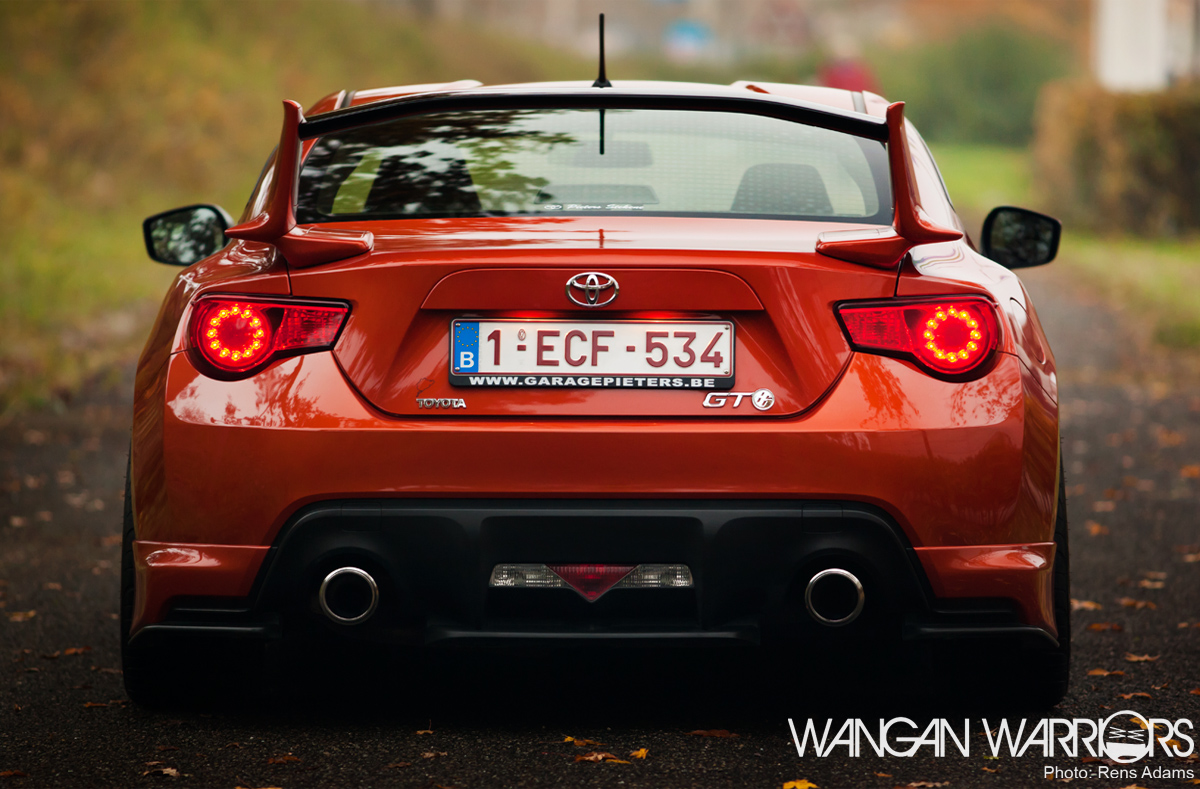 We were graced with a nice photo location just behind the meeting area. We’ve been organising the End of Year meet for four years in a row and I was never aware of the cul-de-sac just behind the buildings, which works just fine for a little photoshoot. Luckily it wasn’t too hard to compose shots without too much distraction of the meet in the background. 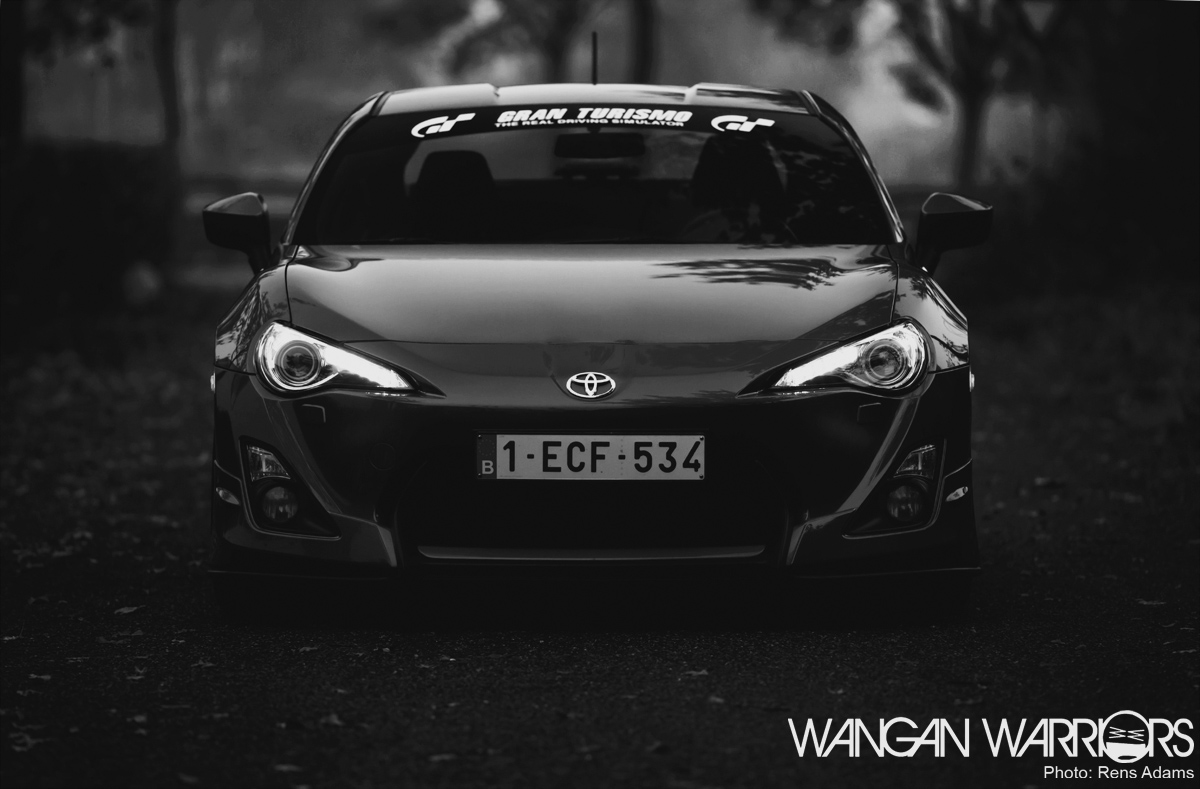 It was still a little foggy from the day before but the light was reliable to work with. It caught my attention that there were a few Nürburgring vinyls on the Toyota which made me wonder what Gunter’s laptimes were. He told me he was not that much of a racing driver but isn’t too shy for a few gentle laps through the green hell. 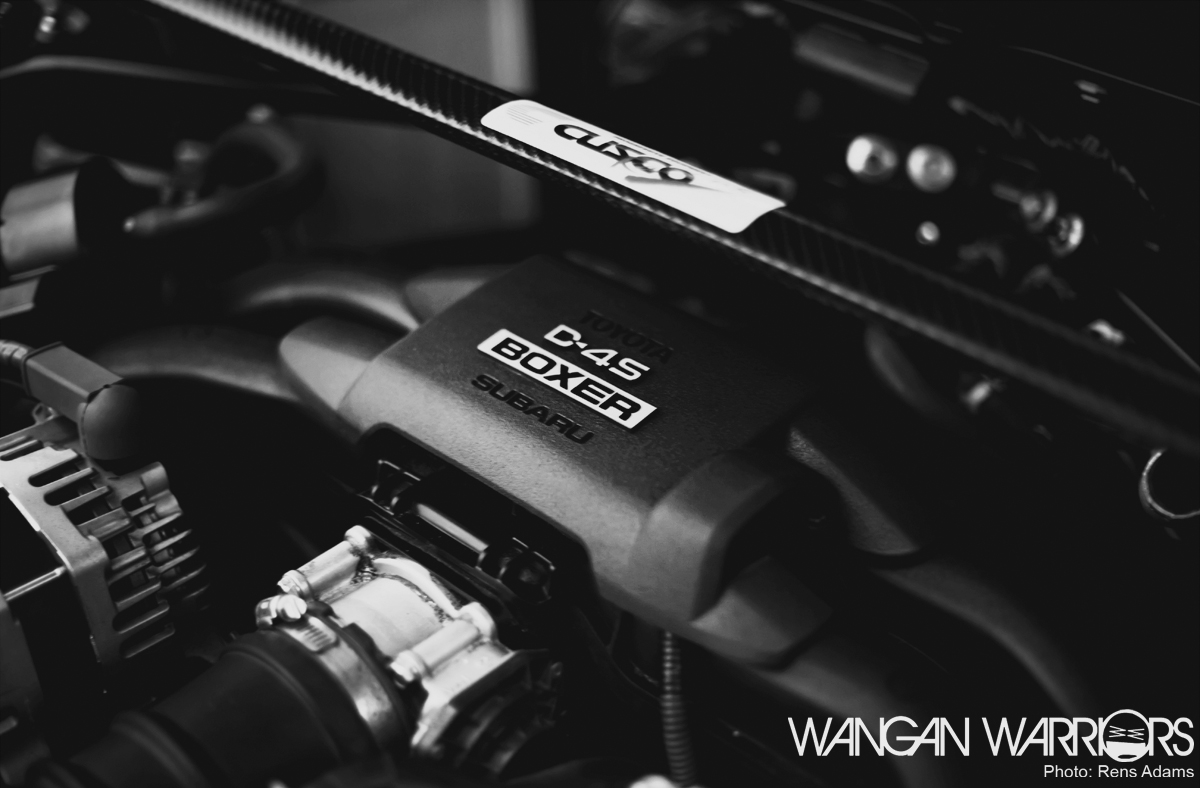 Although many people are under the impression that the D-45 boxer engine lacks performance, to me it has the perfect drivable amount which keeps it fun and comfortable to drive. Given that the GT86 is maybe the most talked about car of the past two seasons, it’s no suprise either that it would be tuned and modified by many. So it’s clear by now that it has loads of potential. 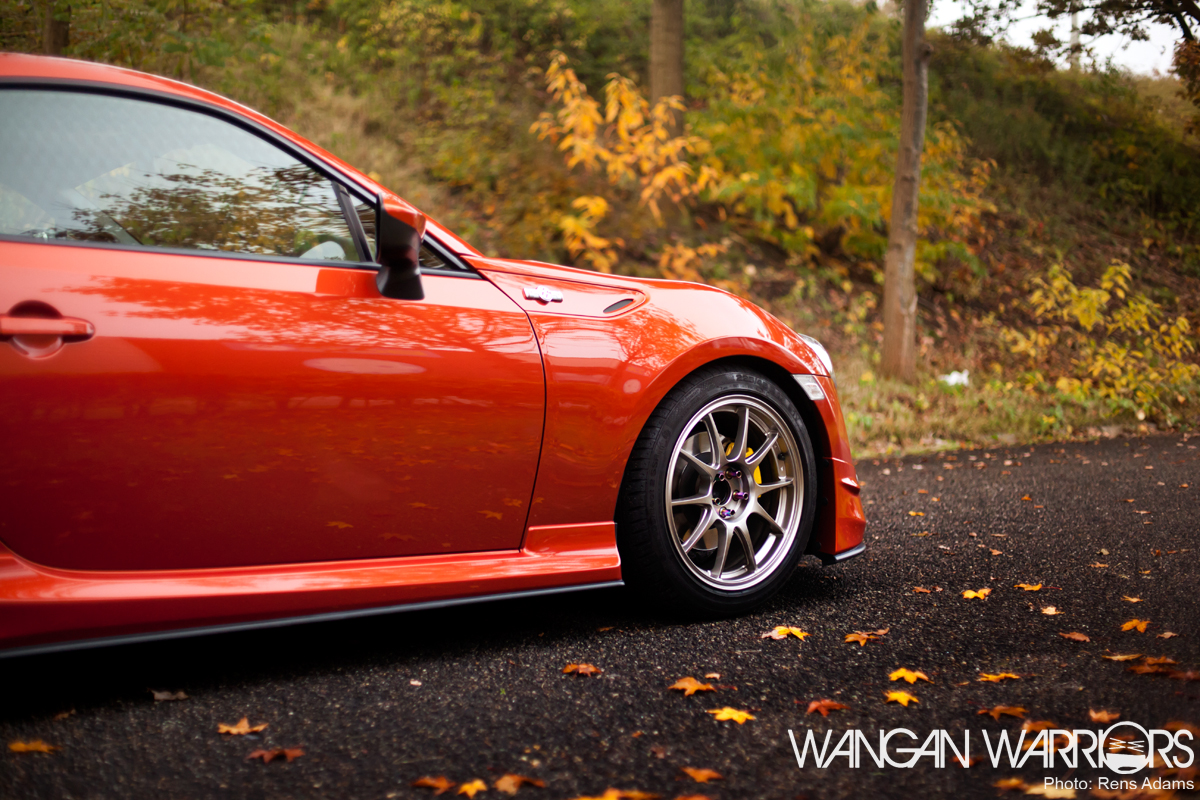 Gunther didn’t leave it bone stock either. Since his purchase last year he did a few modifications which improved the drivability and appearance of the 86. He switched to the Wedssport TC 105N wheels, which give it a little more sporty look if you ask me. 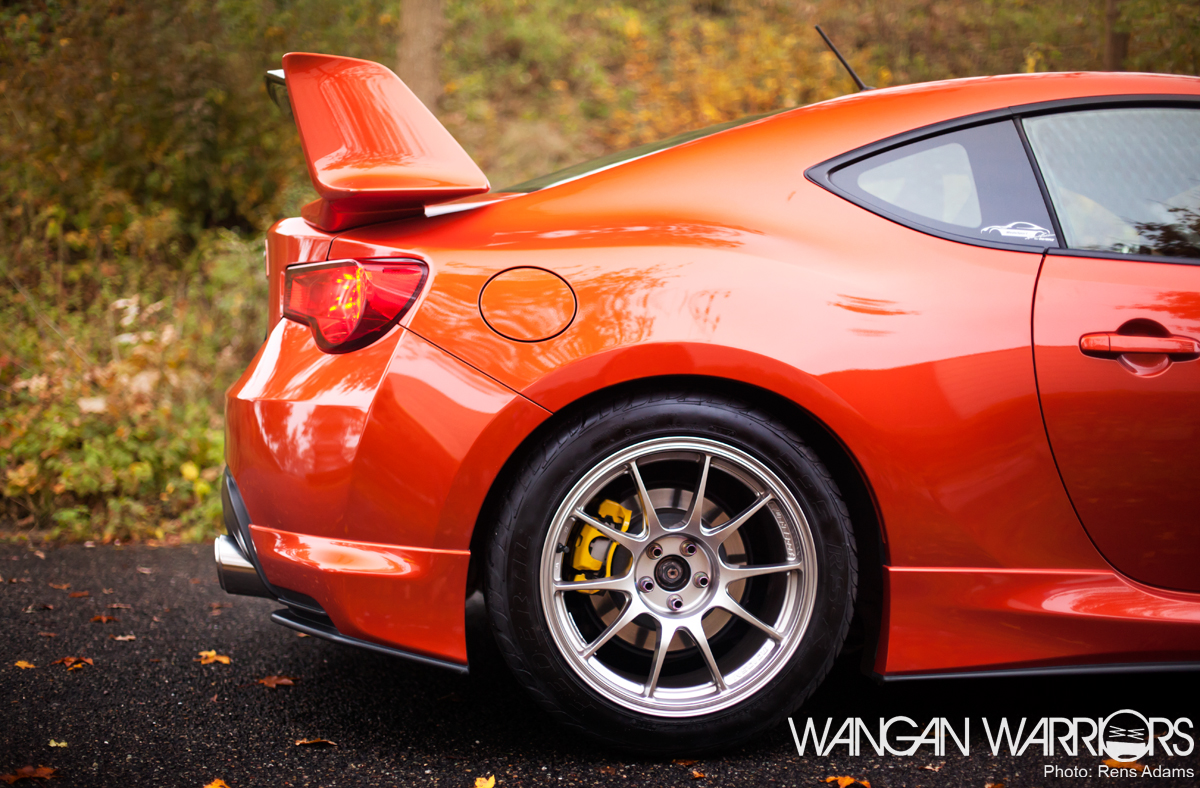 He also replaced the stock springs with Meister R Zeta R coilovers and slightly lowered it. The coilovers have a springrate of 6kg which is still very comfortable for roaduse. 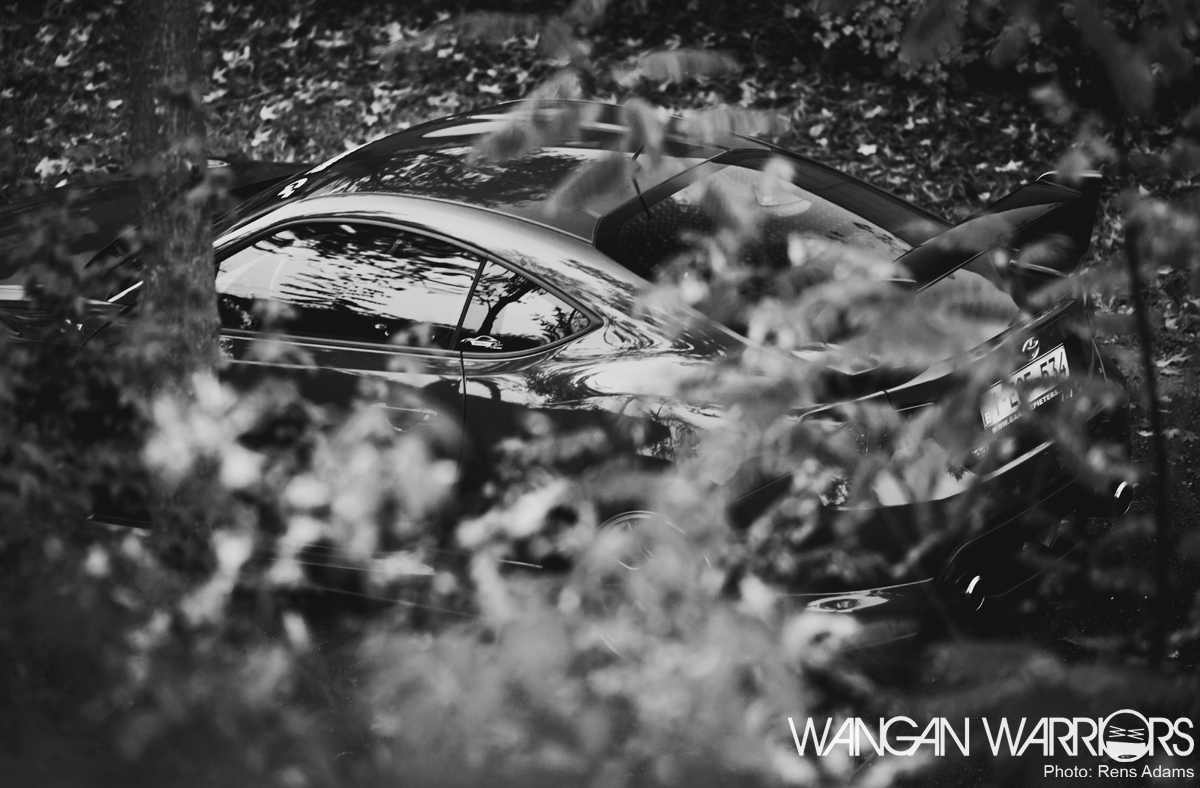 I do admit that I prefer the function above form look for the GT86. I was always under the impression that the different aeropack was a TRD package, but in fact it’s an option of Toyota named Nur Spec. 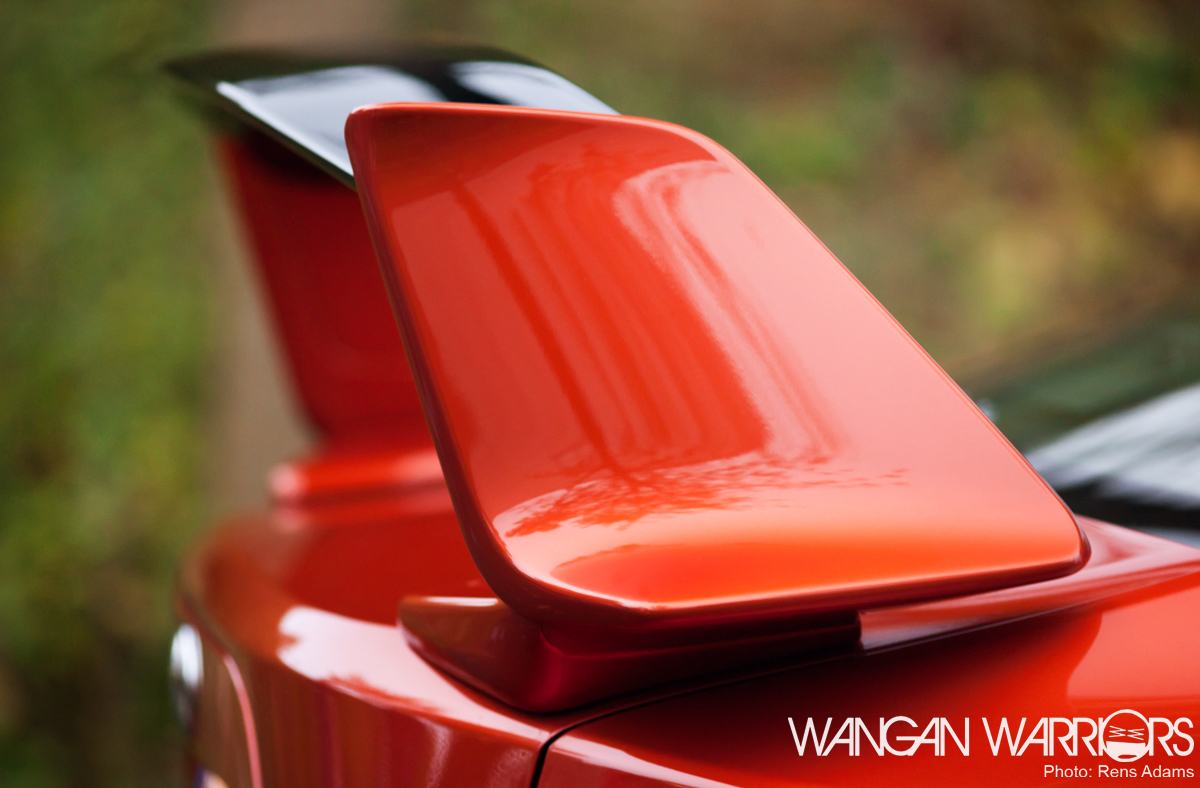 Let’s point out a few significant design signatures which give this kit and the GT86 in general such an attractive yet violent charisma. I believe the big rear wing is the most striking part of the Nur Spec package. 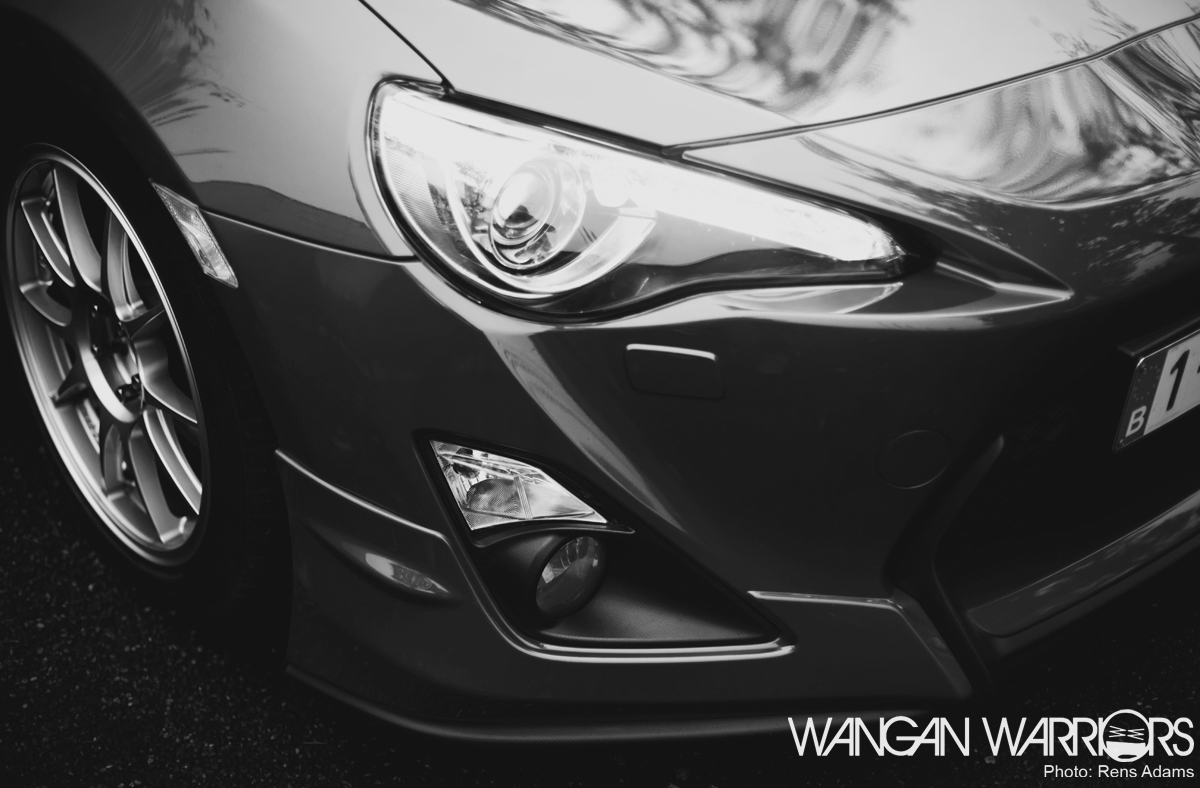 One of my favourite parts of the entire car is the headlight design. To me it’s such a characteristic part of the car and already comparable to the recognizabilty of the Skyline taillights. It’s very rare that a brand is able to design such signatures. 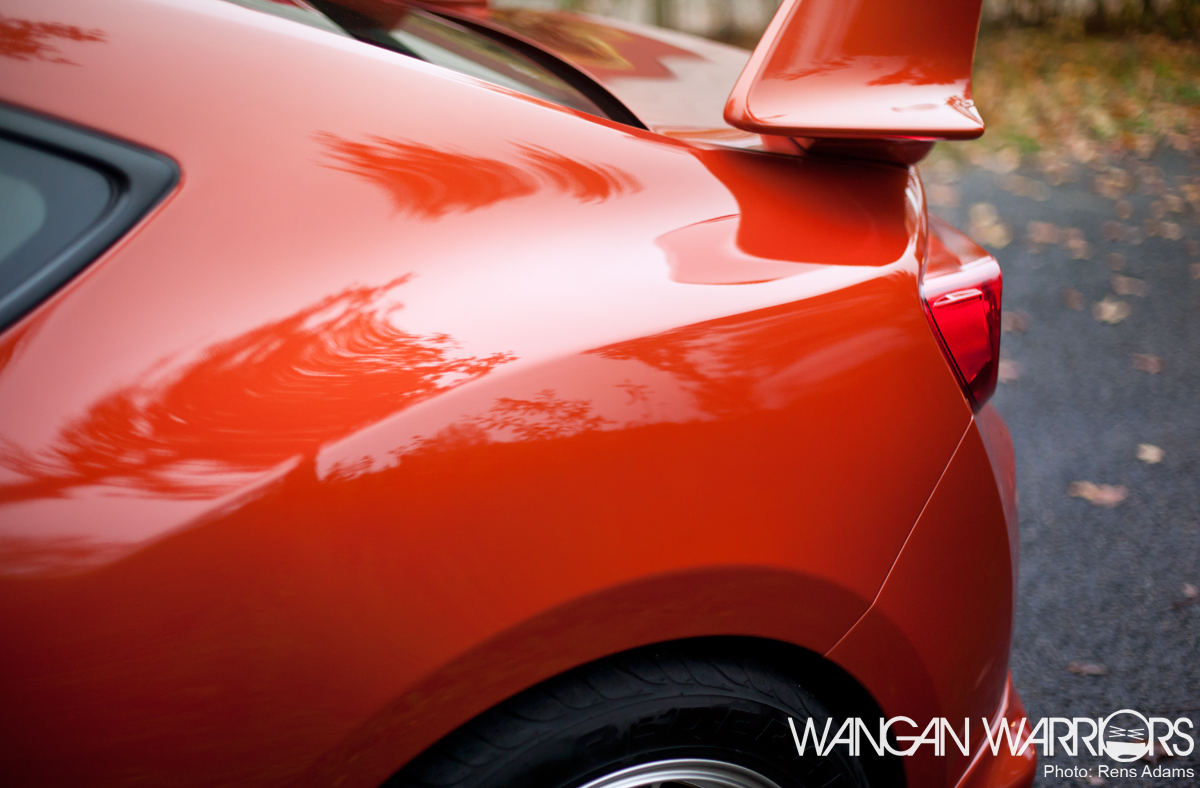 Gunther also shared some personal information with me about why he bought the Toyota in the first place. Since the first concept in 2009, Gunther fancied the design. He said to himself that one day he would own one of them, not knowing when the official release would be exactly. 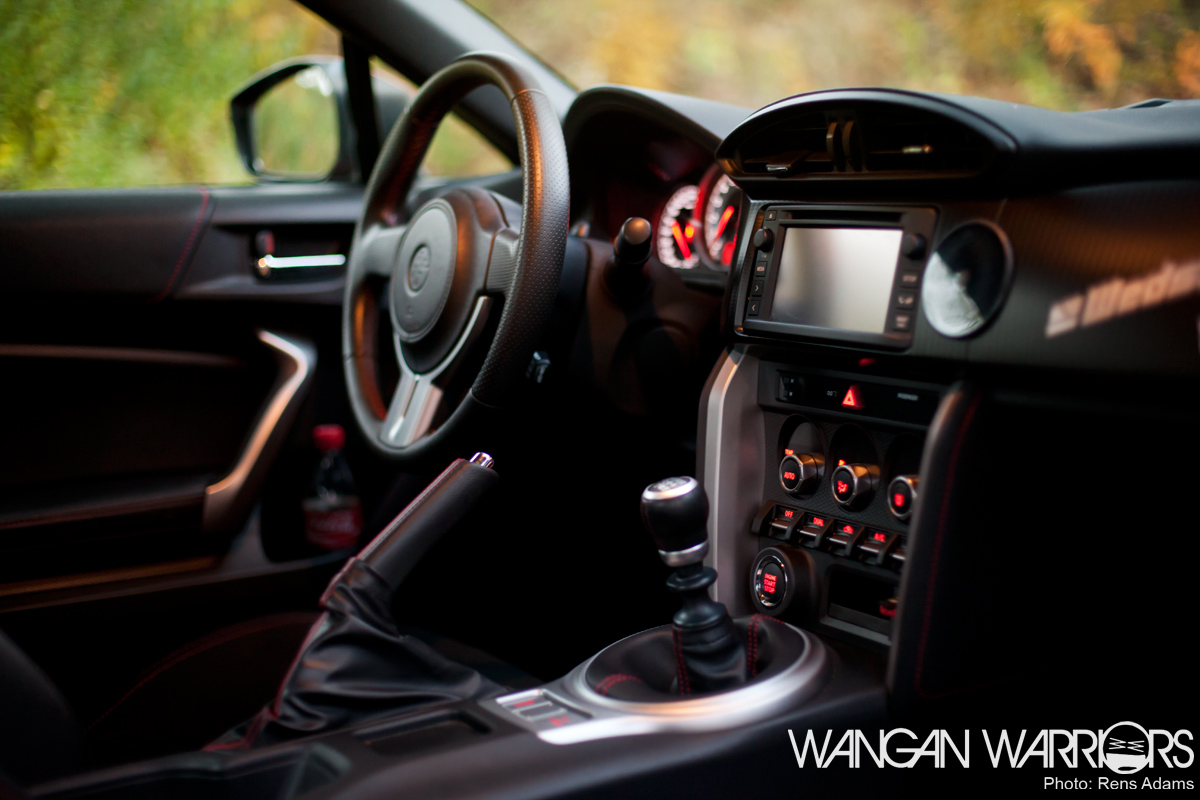 At first it wasn’t within his price range but he saved up the money and after seeing one of the first reviews by Chris Harris, his decision was made. He went to one of the local Toyota dealers and it only took him an hour to put in the order for one Toyota GT86. 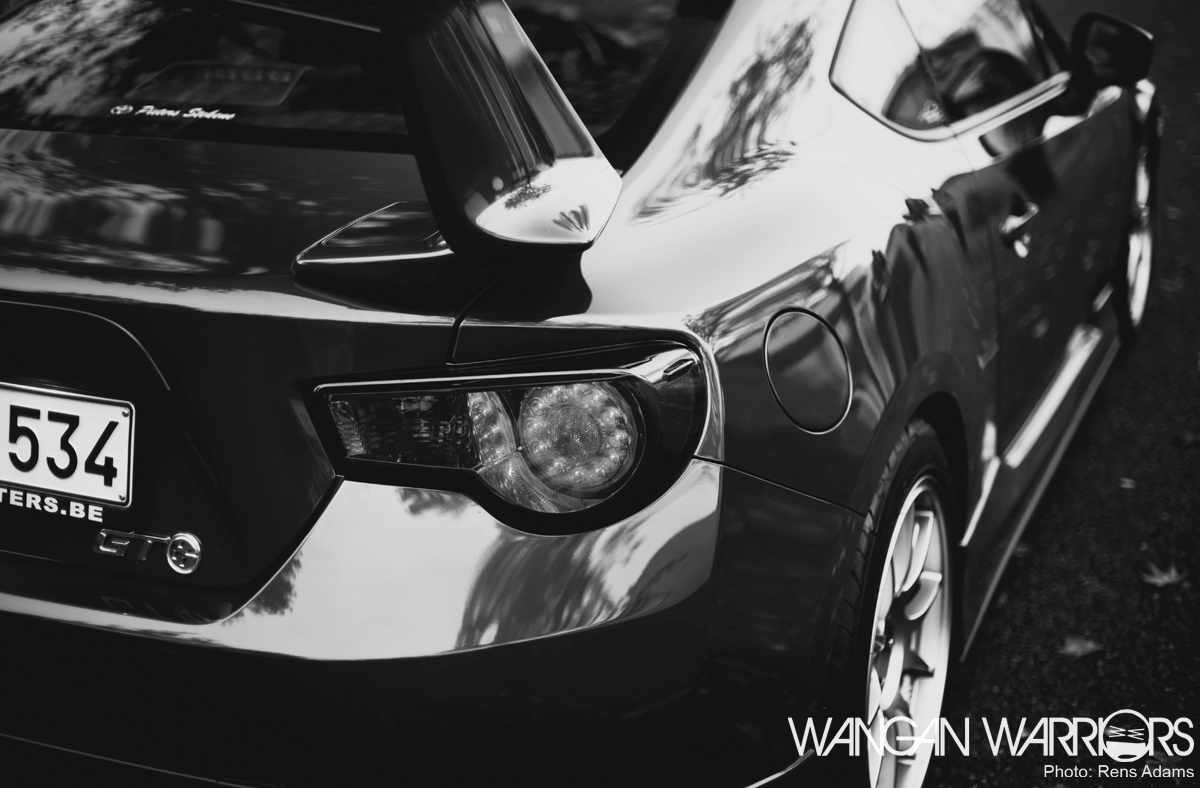 A dream came true and he was one of the first owners down here to drive it, I believe. Only a few weeks later Wangan Warriors organised the 2012 End of Year and we were all excited to see the GT86 arrive at our meeting. 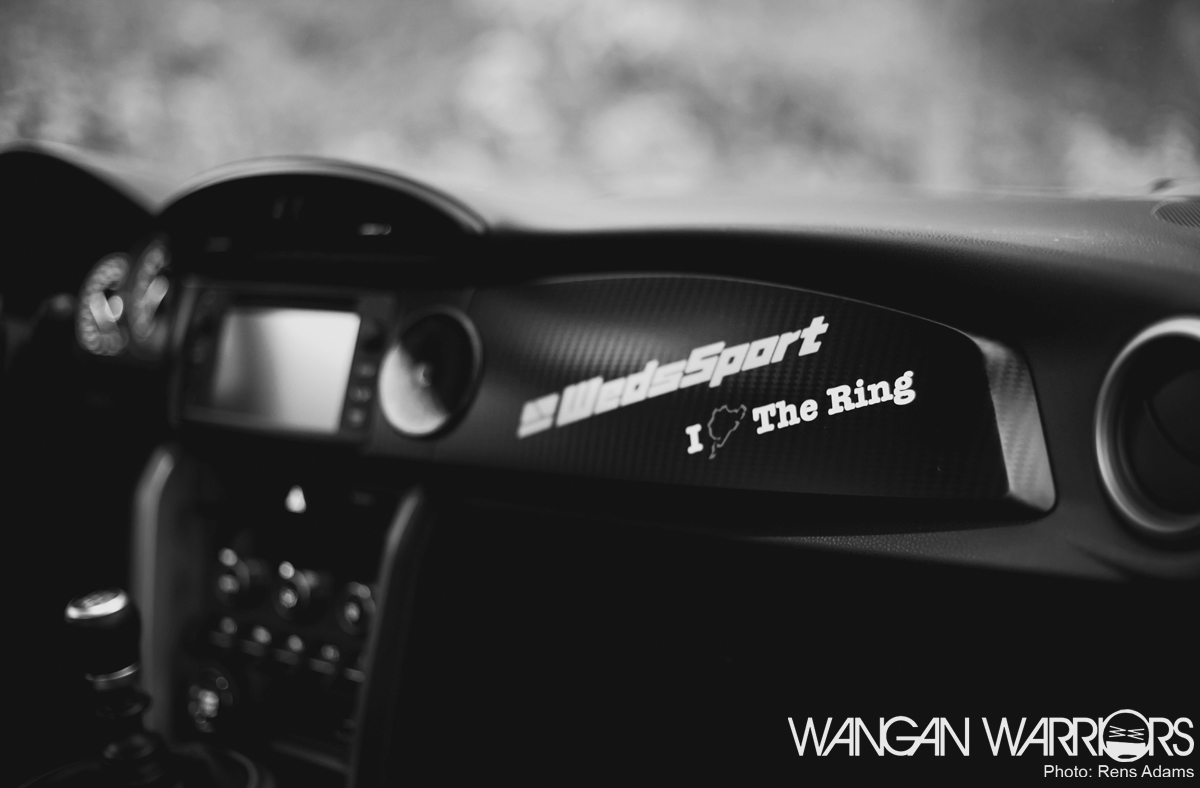 Now, little over one year later I’m finishing up a blog about that particular car and still being owned by that proud Belgian fellow. I must say it’s nice to see people returning to our meetings over the years and see what they’ve done to their cars. Although the changes Gunther did to the ’86 are subtle, they’re still complementary to the car’s appearance and handling. 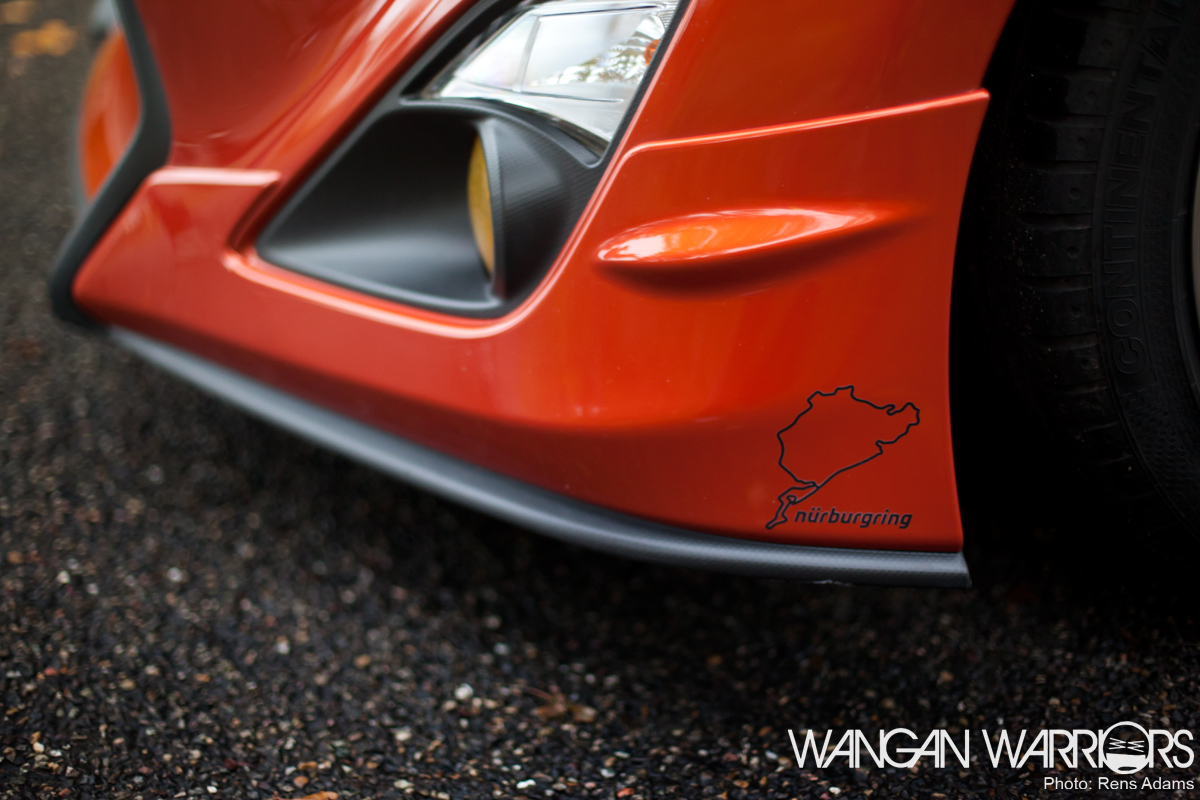 I would like to conclude this article by thanking Gunther for visiting our event again and I hope you appreciate and enjoy the photos. Good luck with all the progress and we’ll meet again next season! If anybody has any suggestions for photoshoots, feel free to let us know in the comment section!