I find it hard to define our scene at the moment. It’s growing and changing and the daily drivers are becoming more impressive by time. The amount of people who now drive around with such lowness and/or performance parts on a daily basis doesn’t seem to be that strange anymore. In fact it’s quite normal these days. It might be just me who thinks of it this way but still things are changing. 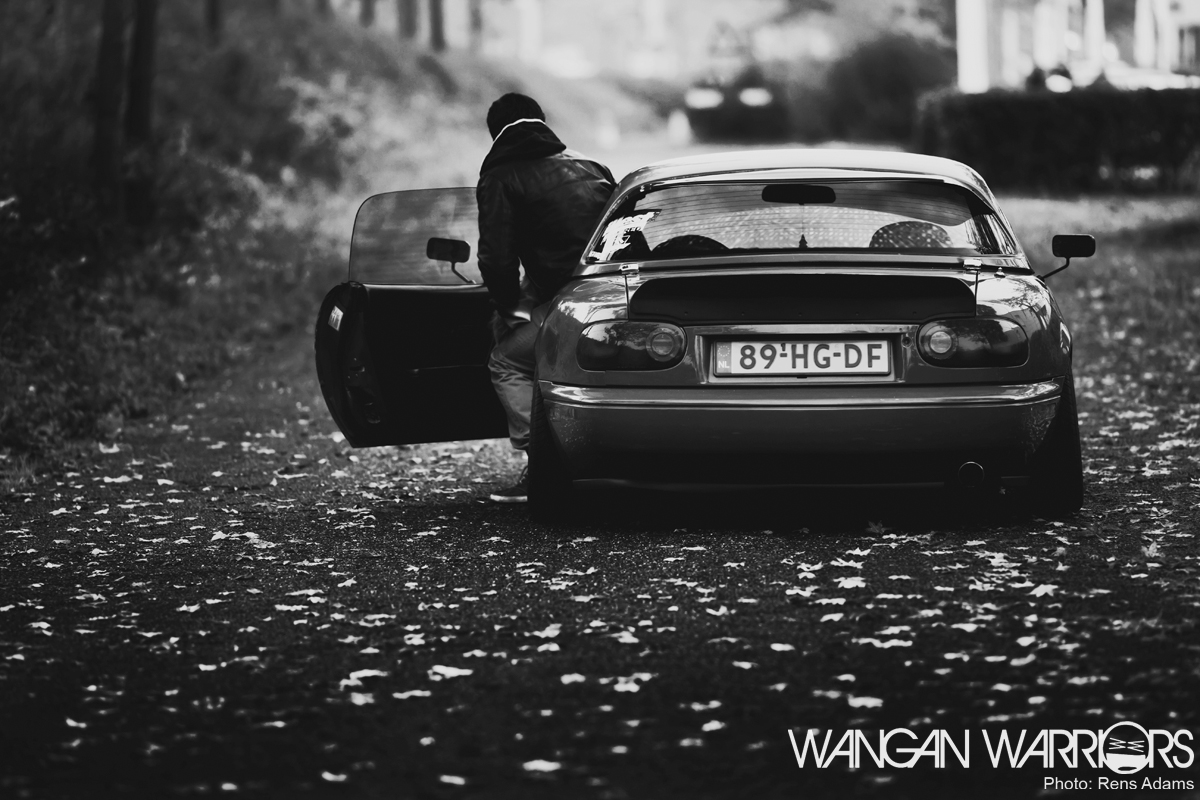 The Roadstercrew guys are no strangers in raising the bar when it comes to their daily drivers. When I saw Jamie’s Miata I thought it was the perfect example of that. I saw some videos and pictures of his Mazda on the internet and always wanted to see it in flesh. 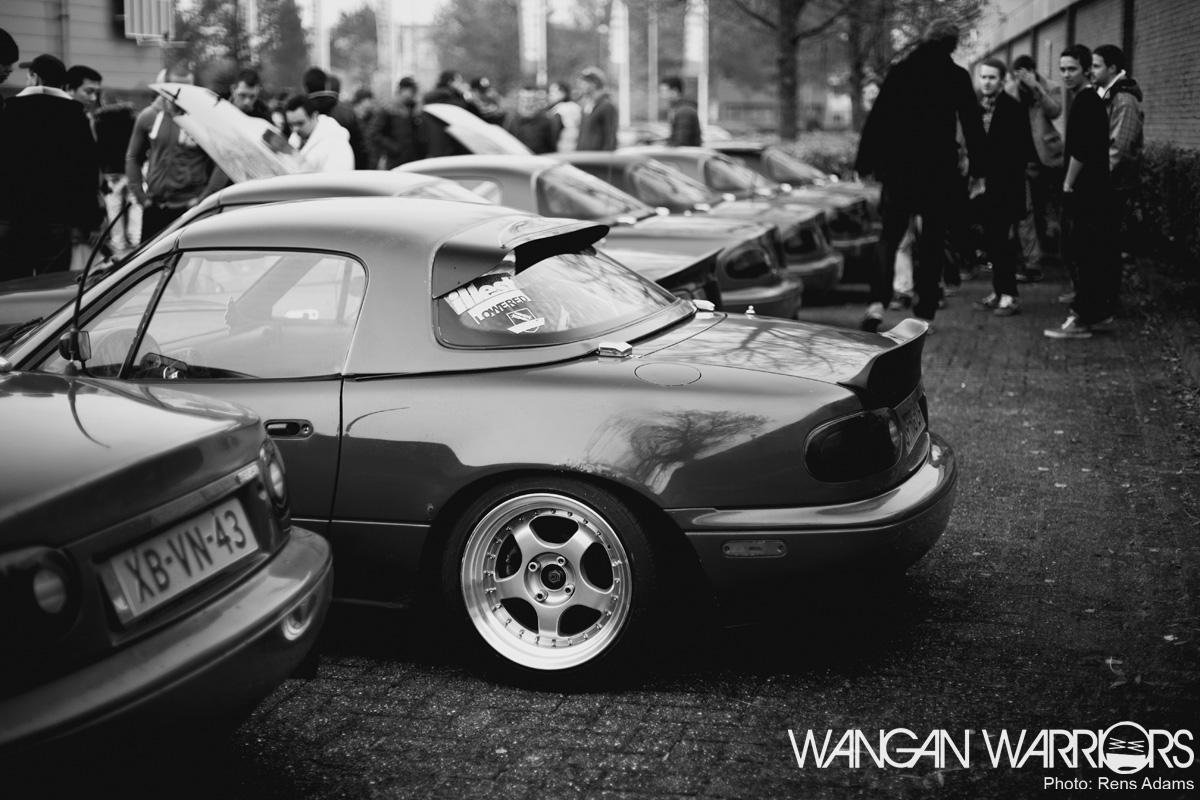 Luckily the Roadstercrew was more than well represented at our End of Year Meet and we made sure they could nicely park next to eachother so they had their little bromance corner. 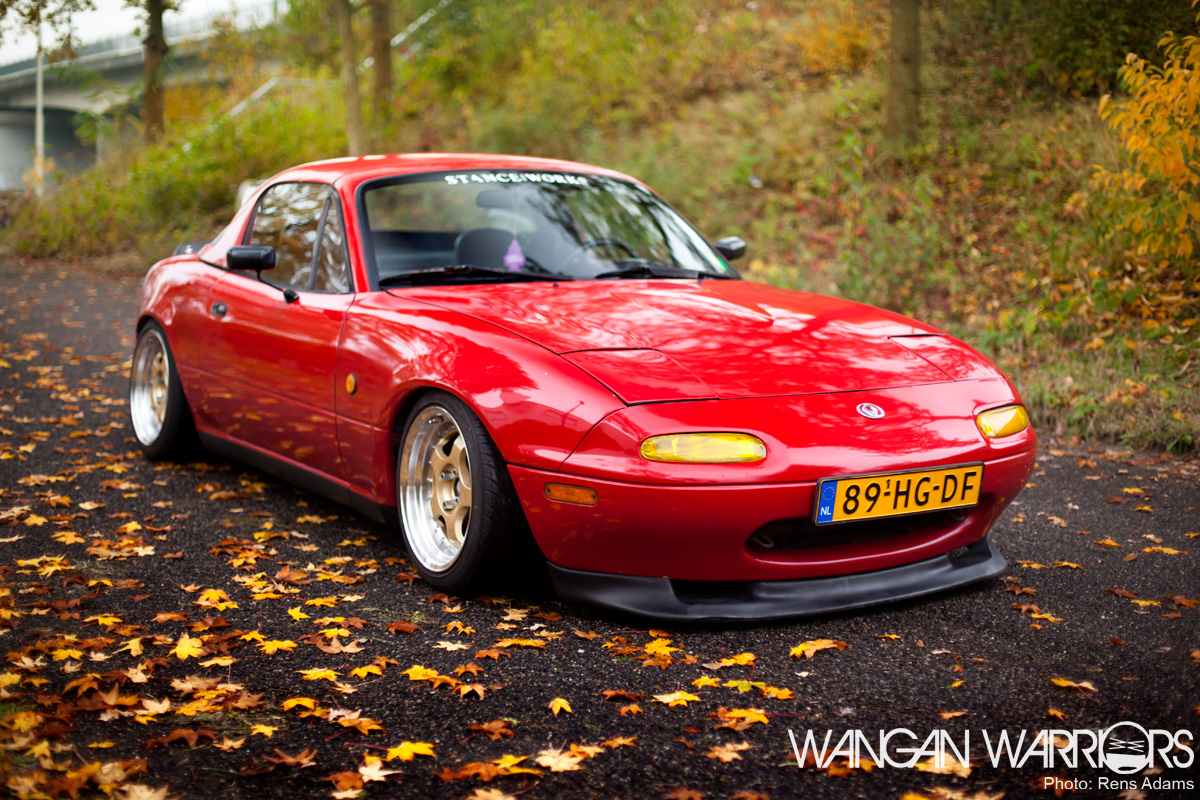 When I went over to their little corner to greet these fine upstanding citizens I immediately asked Jamie if he was interested in a little shoot for our blog. As always the offer for a photoshoot wasn’t turned down. 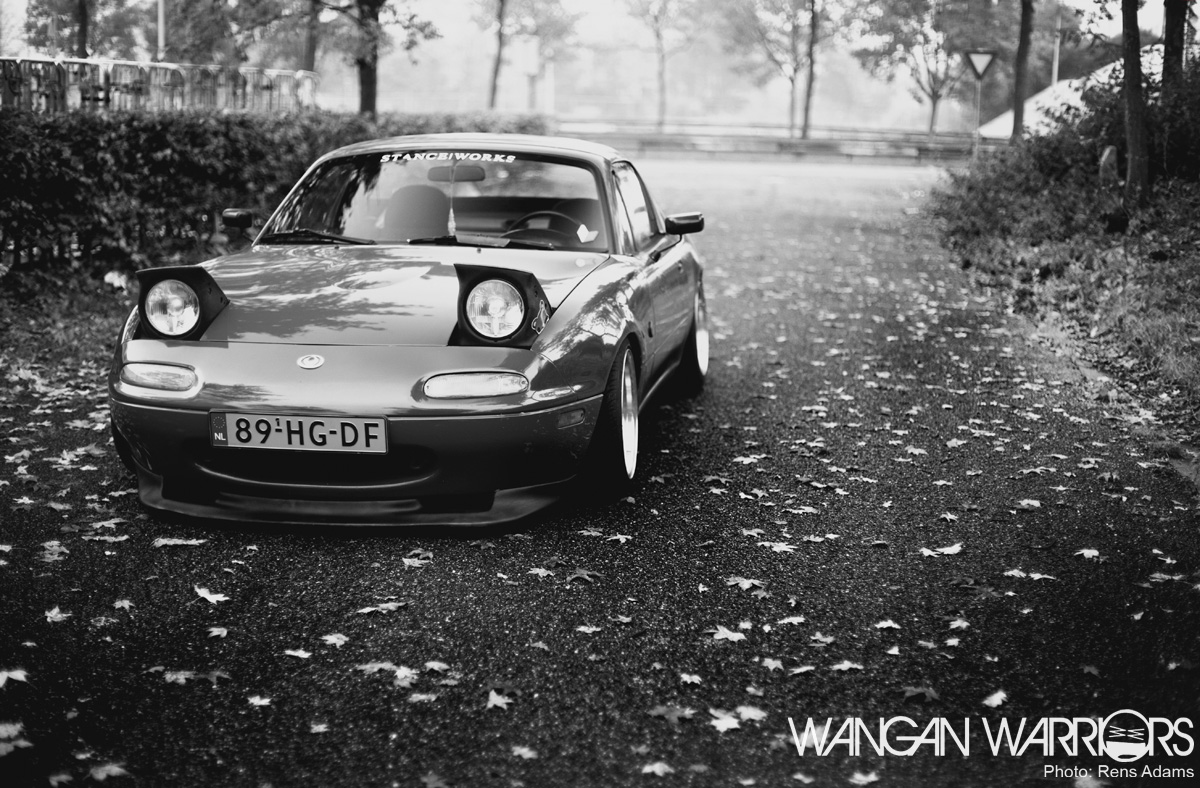 We did the photoshoot at the same location as the GT86 we’ve posted earlier. The cul-de-sac is an ideal location for a quick spotlight shoot at the meeting area. 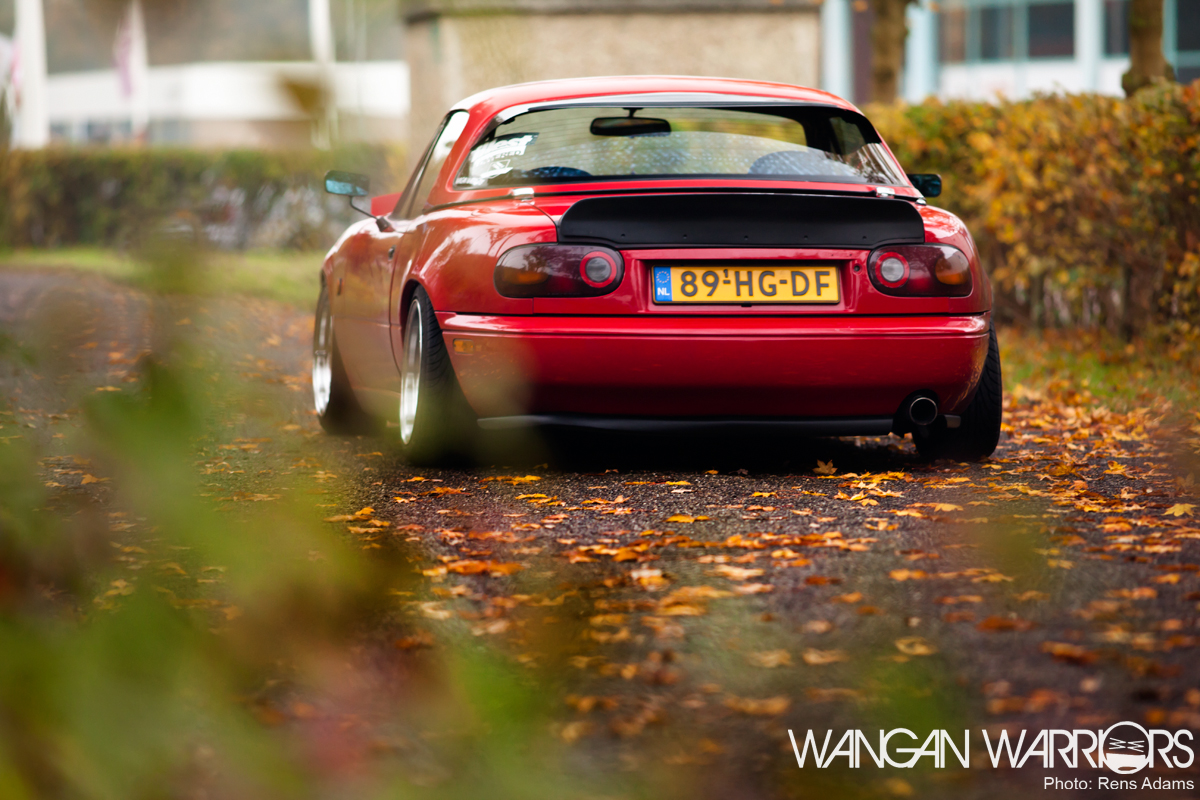 Sure there are cars with the most expensive upgrades and I agree there are more show worthy cars to shoot. But that’s not the only thing we focus on here at Wangan Warriors. 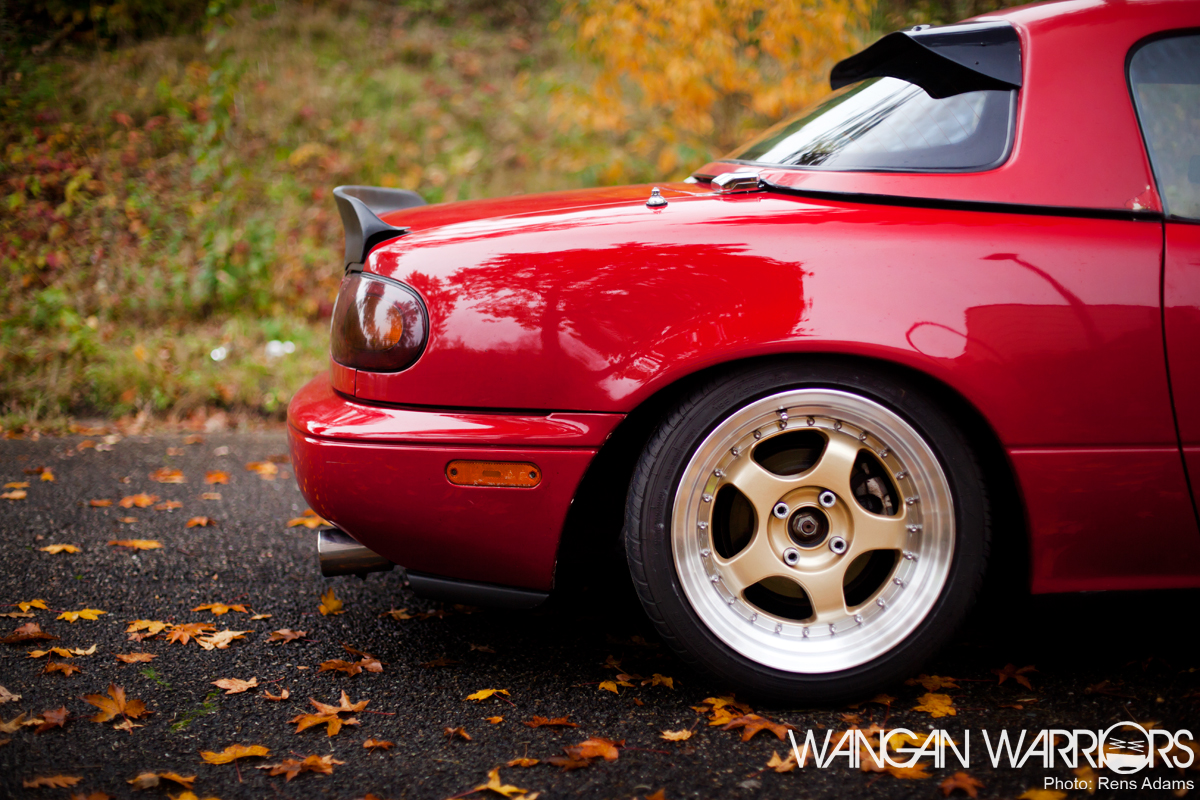 Jamie chose to do a few subtle modifications to his Miata and in my opinion, it doesn’t need many more to outstand. Let’s take a quick look at them shall we? He lowered the NA with a set of TA TECHNIX coilovers and rolls on the Drag DR 36 wheels. 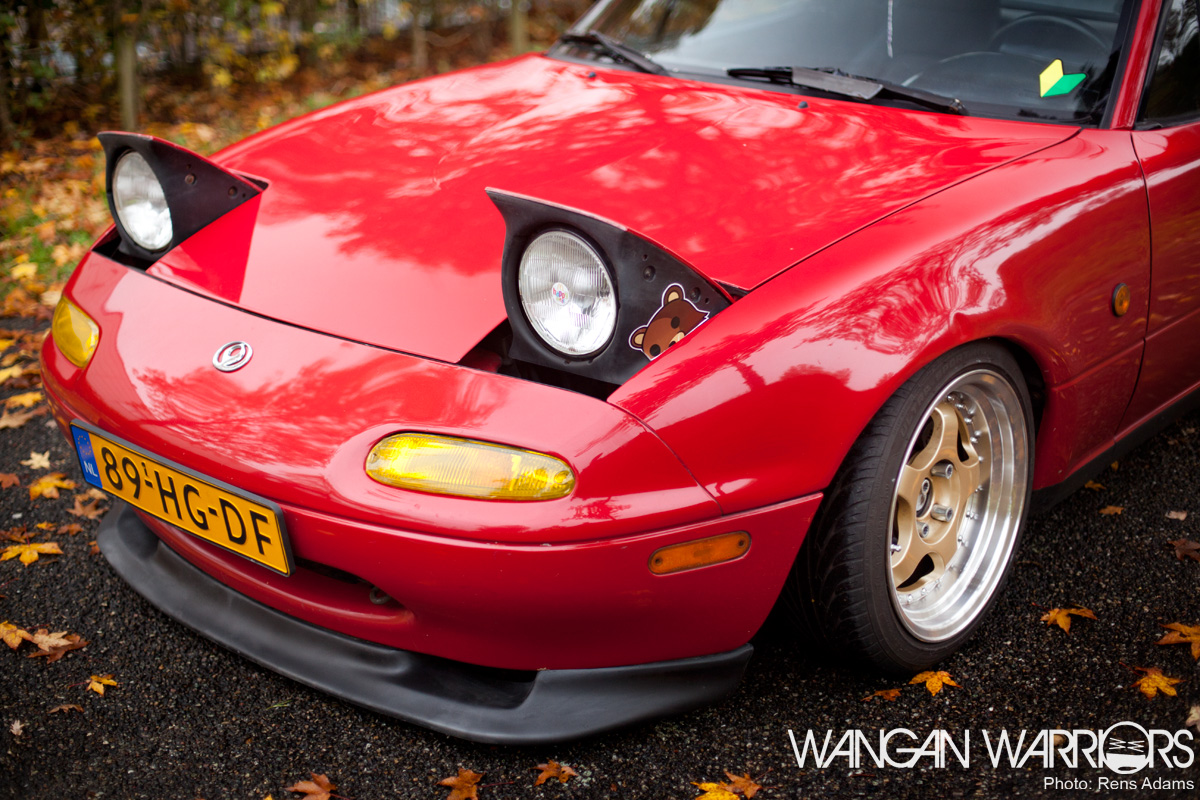 A must have on the MX-5 NA model is the Garage Vary front lip. This was the actual first part I bought for my Miata and to me it really finishes the front of the car. 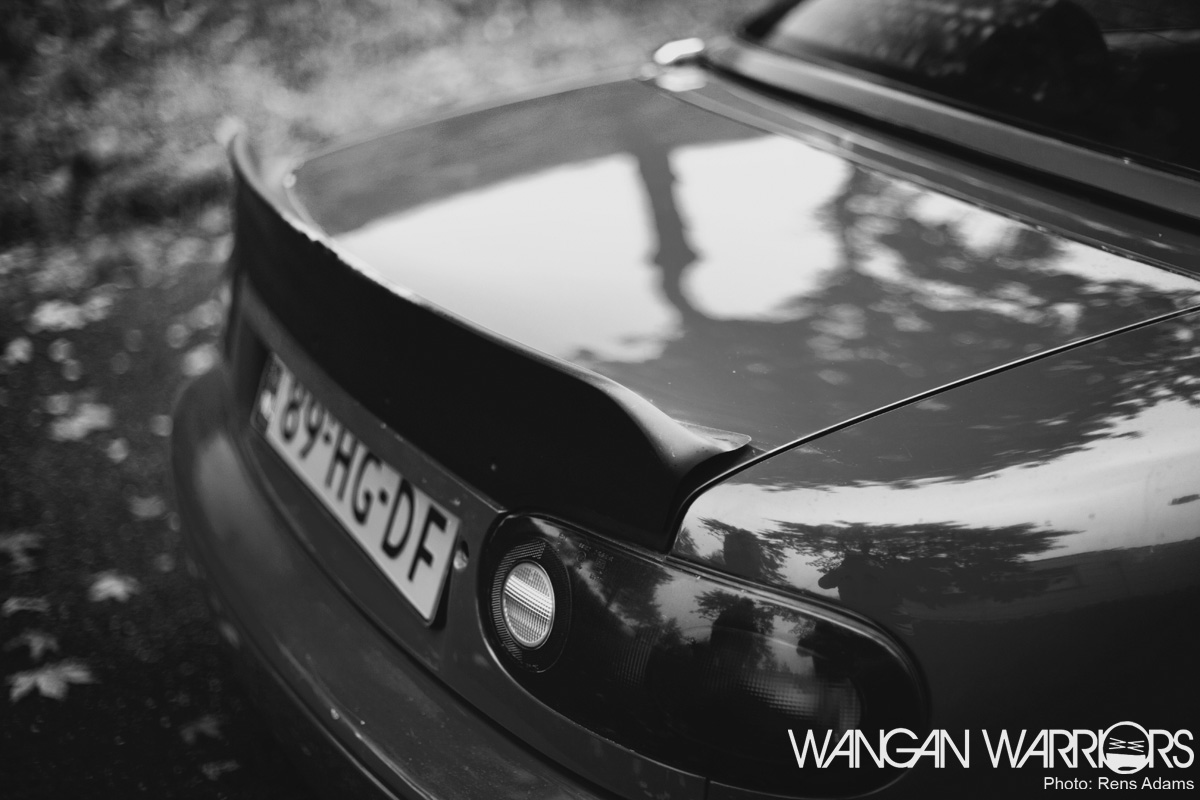 Another subtle and almost a must have modification is a modest wing. The Carbon Miata wing isn’t too striking at first sight but does change the character of the Miata enough to know it’s not in the possession of a 45 year old women who thinks she drives a Z4. 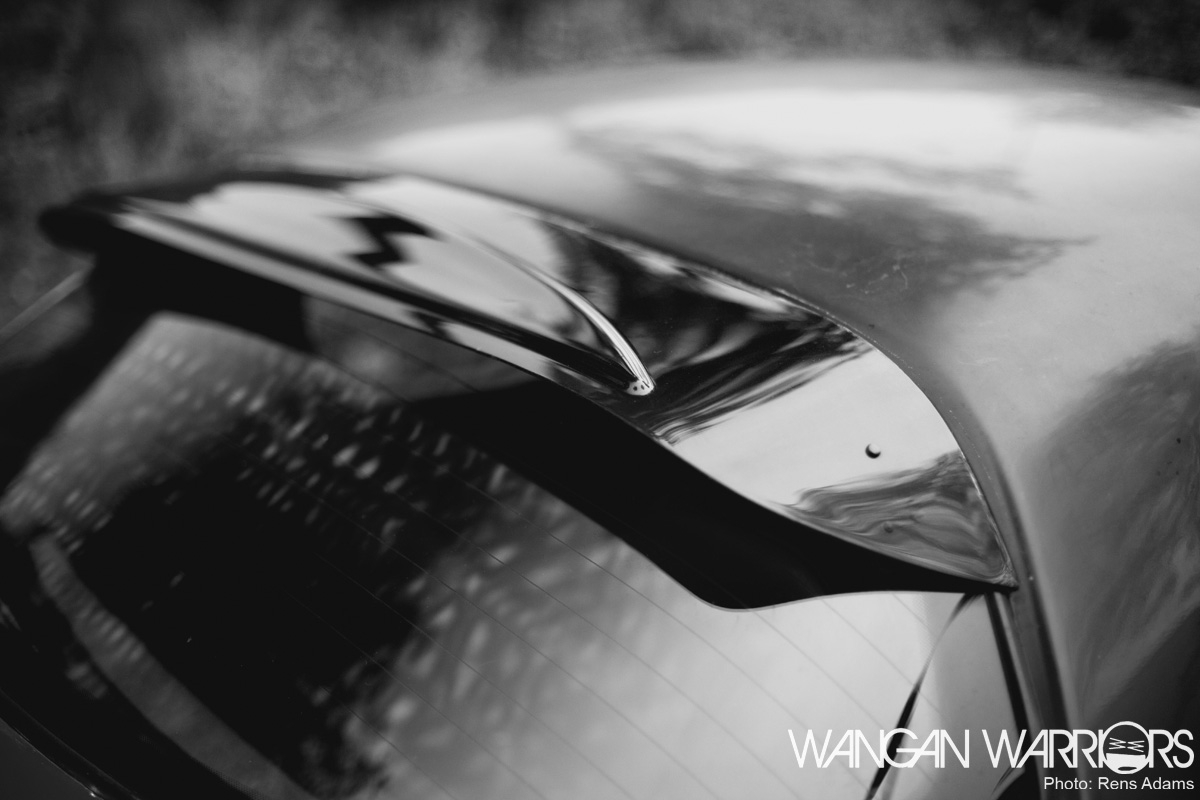 Same applies for the hardtop roof spoiler. Another finishing touch which makes the Miata stand out amongst the rest. 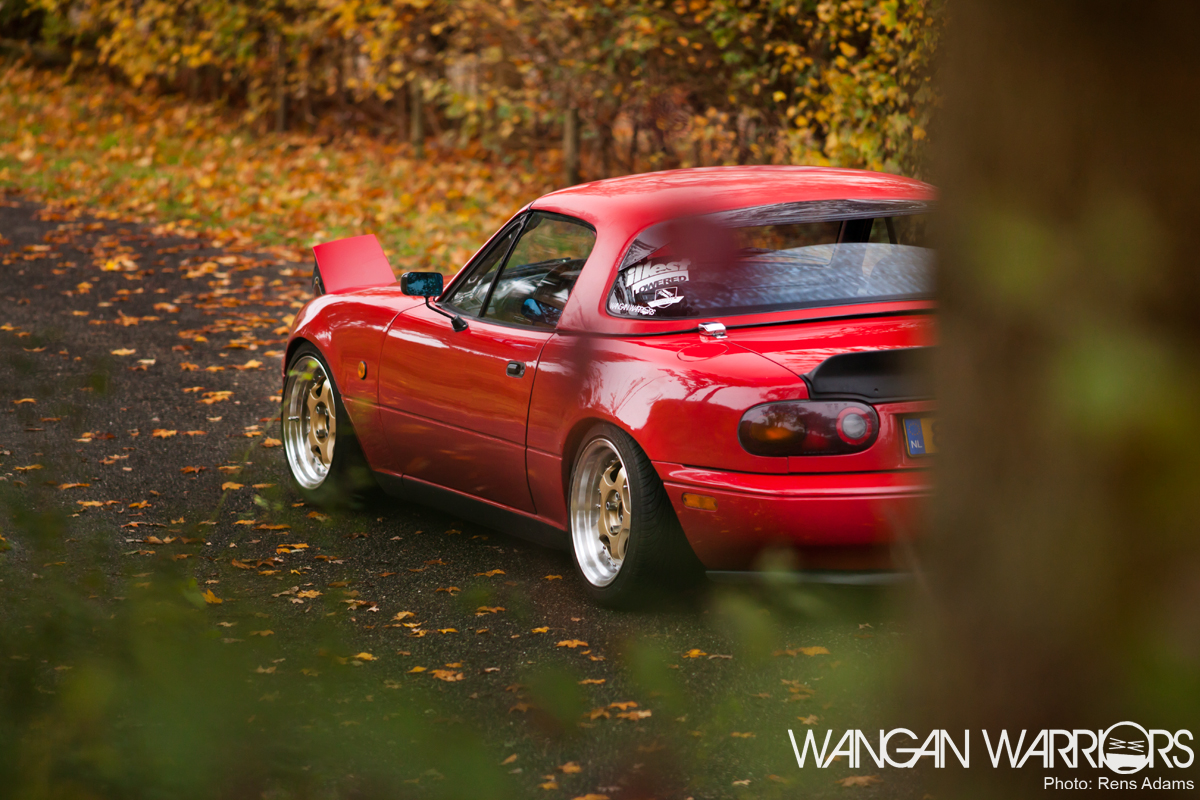 Jamie did a creative thing with the rear as well. He modified a Renault Scenic front lip so he could mount it on his rear bumper. I really thought it was a standard wing just like the rest but I was surprised to hear it. As you can see the stock mirrors were replaced with Master Kirror K-style F1 design’s and I seriously wonder how the view is with these small things! 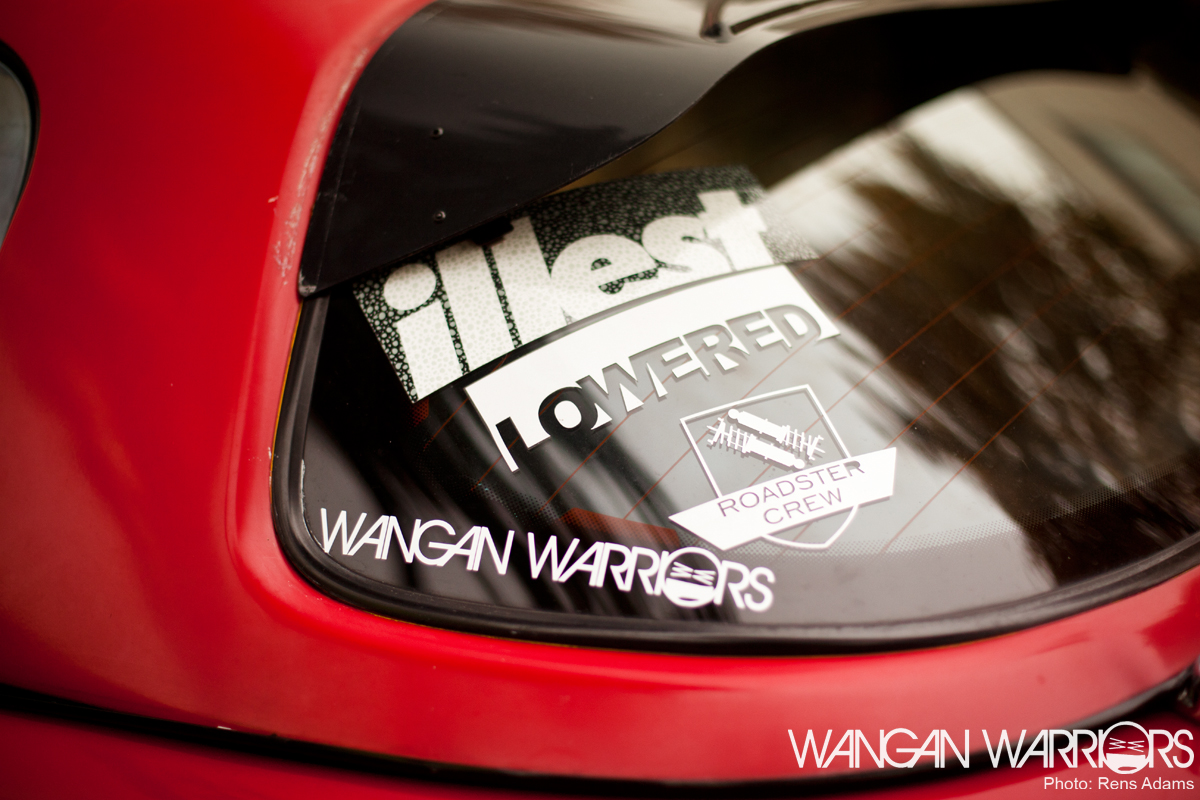 There was no way that I let Jamie go without tagging the car with one of our Wangan Warriors vinyls. He even allowed me to put it wherever I want and I soon decided to stick it brotherly together with the RC club sticker. How cute! 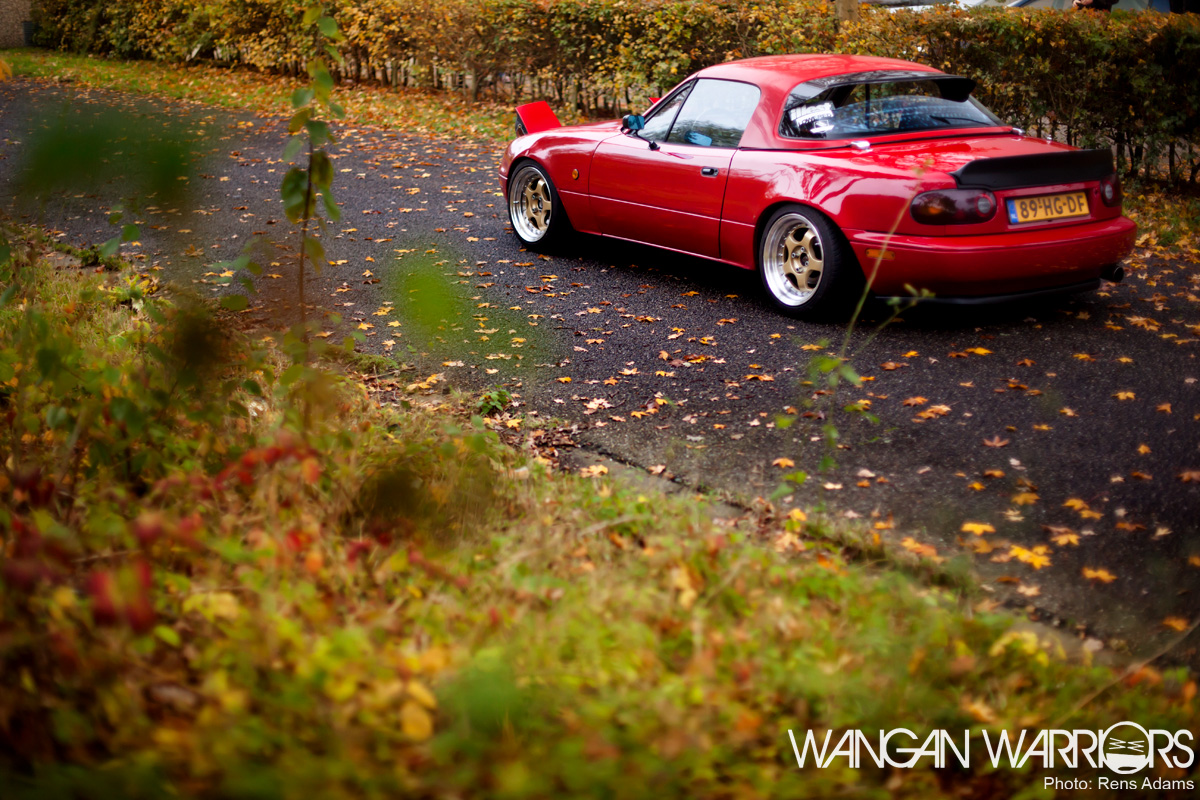 As I said, the modifications are subtle and enough for a daily driver to look awesome. Two years ago you wouldn’t see this beeing driven daily on our Dutch roads and now there is a whole bunch of them. I myself really dig that! 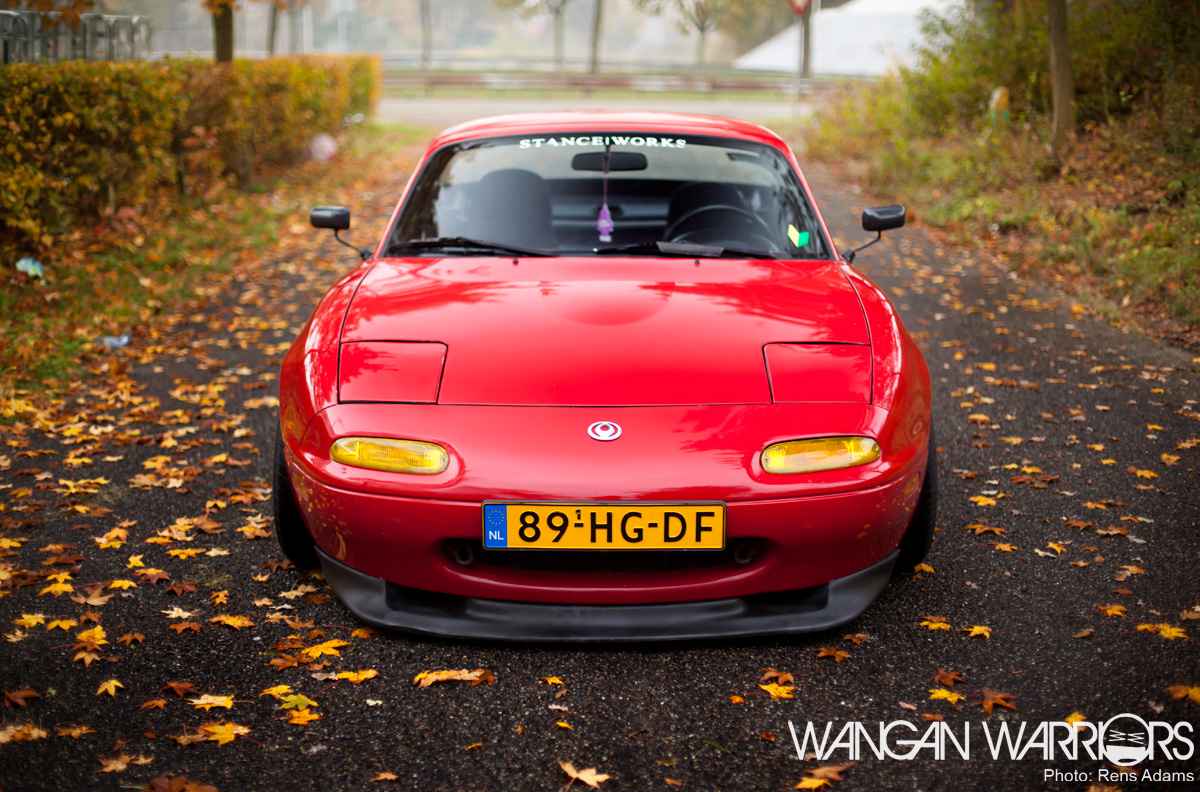 I would firstly like to thank Jamie for his time and company during the photoshoot. I’m looking forward to your plans with the NA in the future so keep us posted! 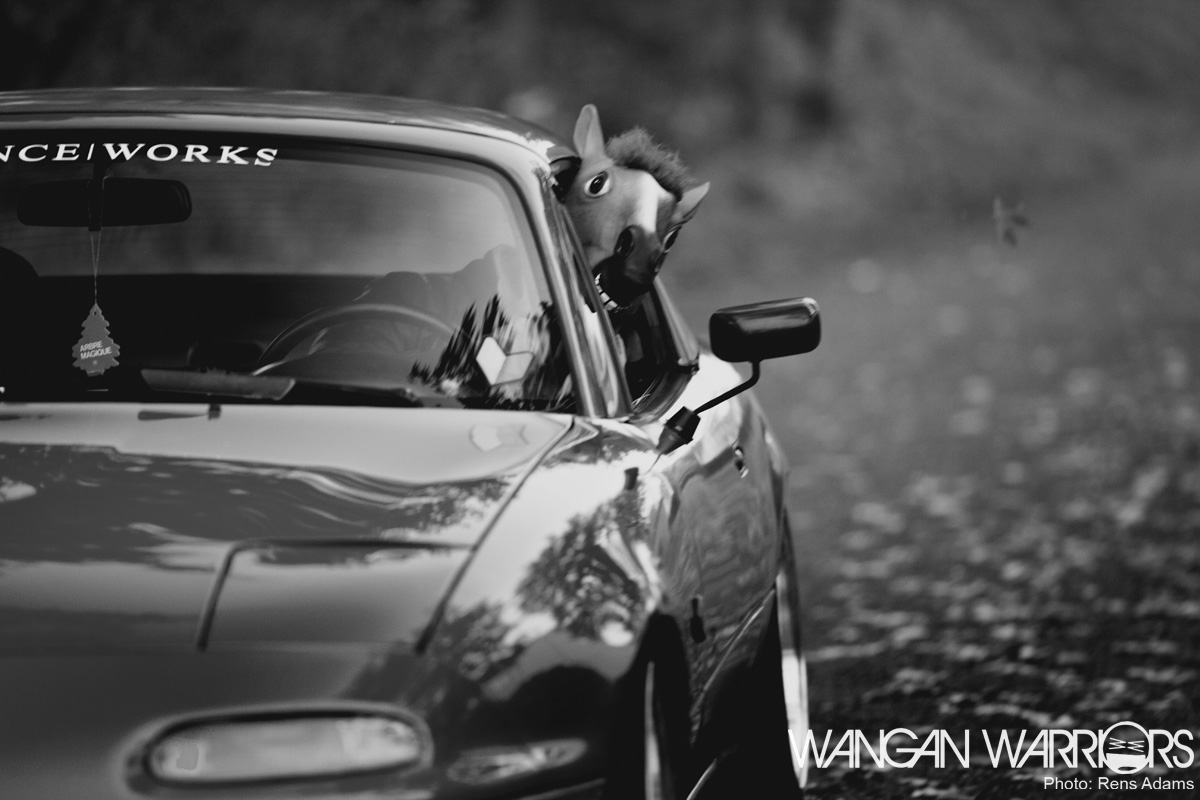 Oh, and caution for all of you out there. When you see an Eunos Roadster, Mx-5 or Miata with a horse head hanging out of his window, it’s a Roadstercrewer beyond any doubt. Run, run fast, hide your kids, wife and girlfriend because these animals are not to be trusted!!!