We as human beings all have our own preference – some like it hot, others like it cold. Some like bacon, others are vegetarian. Some like it stanced, others like it functional. Me? I like my bacon hot, but when it comes to cars I really like most of the sub-cultures within the automotive community, something that reflects on the DMPD events as well as you can see here and here, so allow me to show you some of DMPD finest finest! 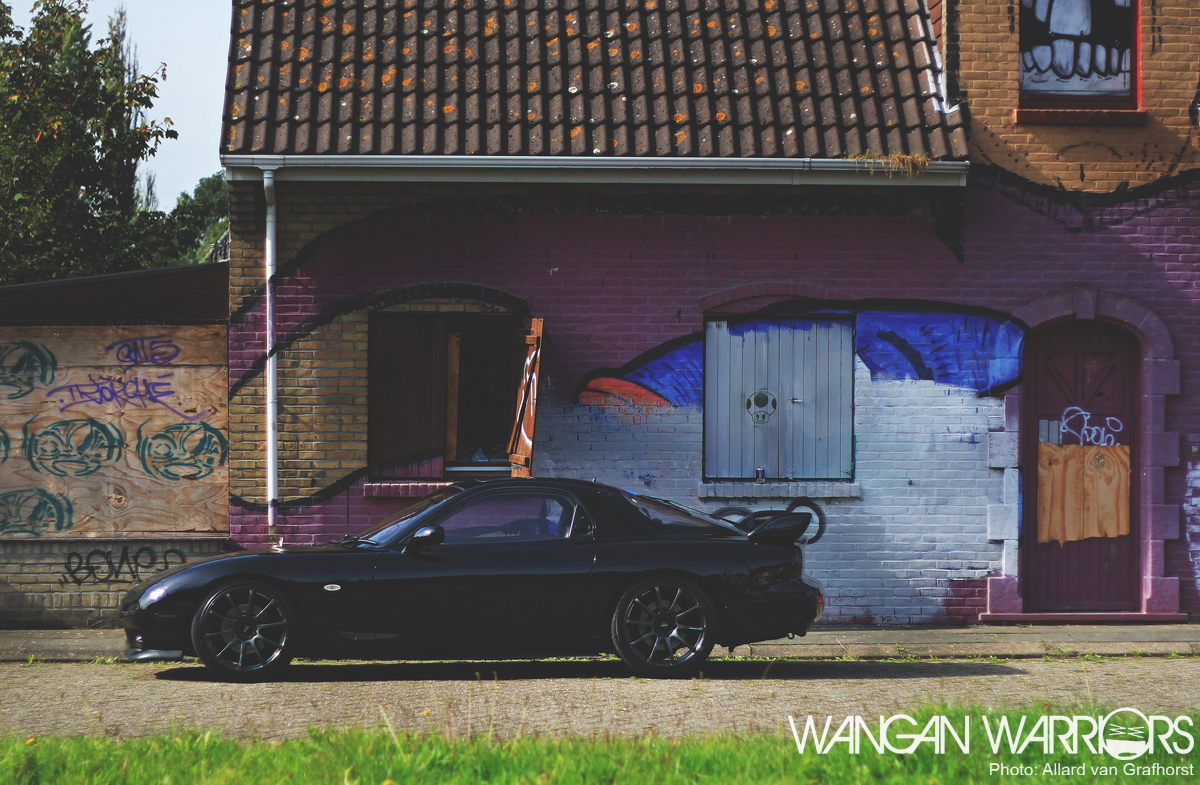 Beschier’s timeless classic
We start with what is, in my opinion, one of the finest cars Japan has ever produced; The Mazda RX-7 FD3S. Unlike Murat’s beast, the owner of this timeless classic, Beschier, has chosen to keep his JDM FD3S relatively close to stock. 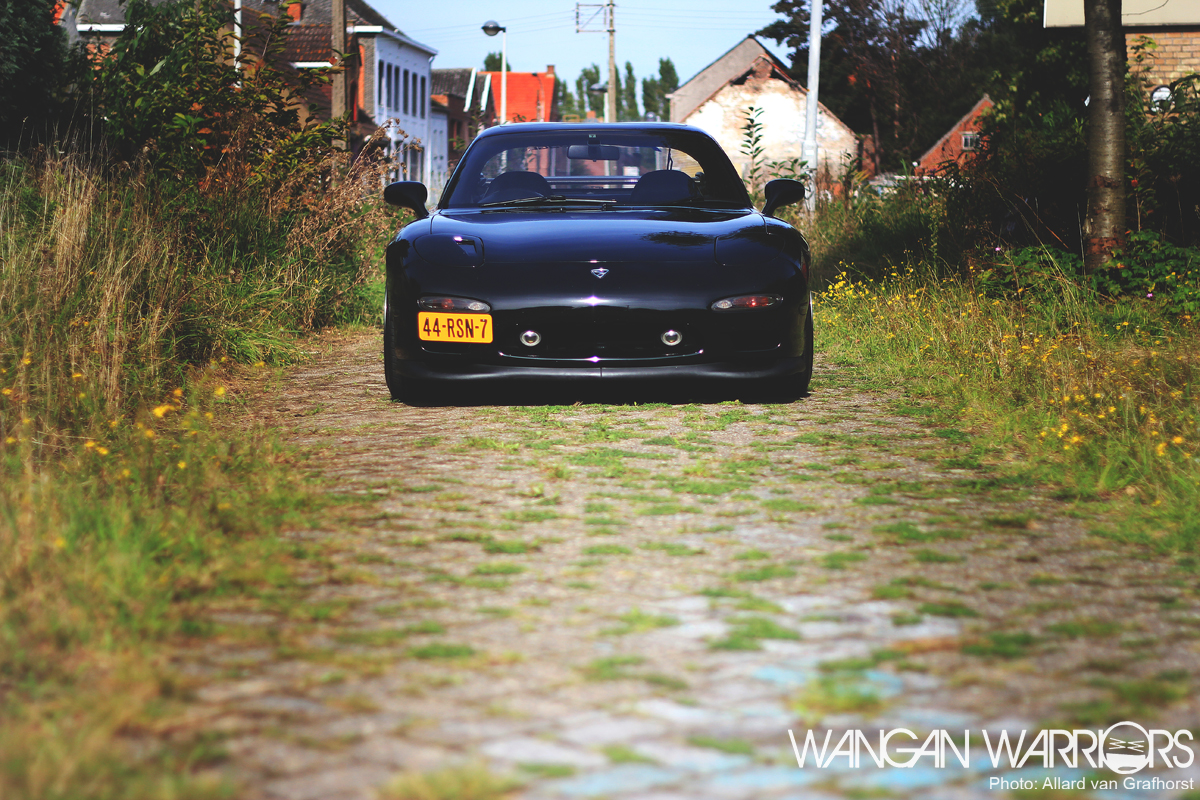 And why wouldn’t you? I mean, look at those lines! Mazda was sure ahead of it’s time  in 1991 when they presented this rotary powered beauty to the world and in my opinion it still looks better than most present day designs. 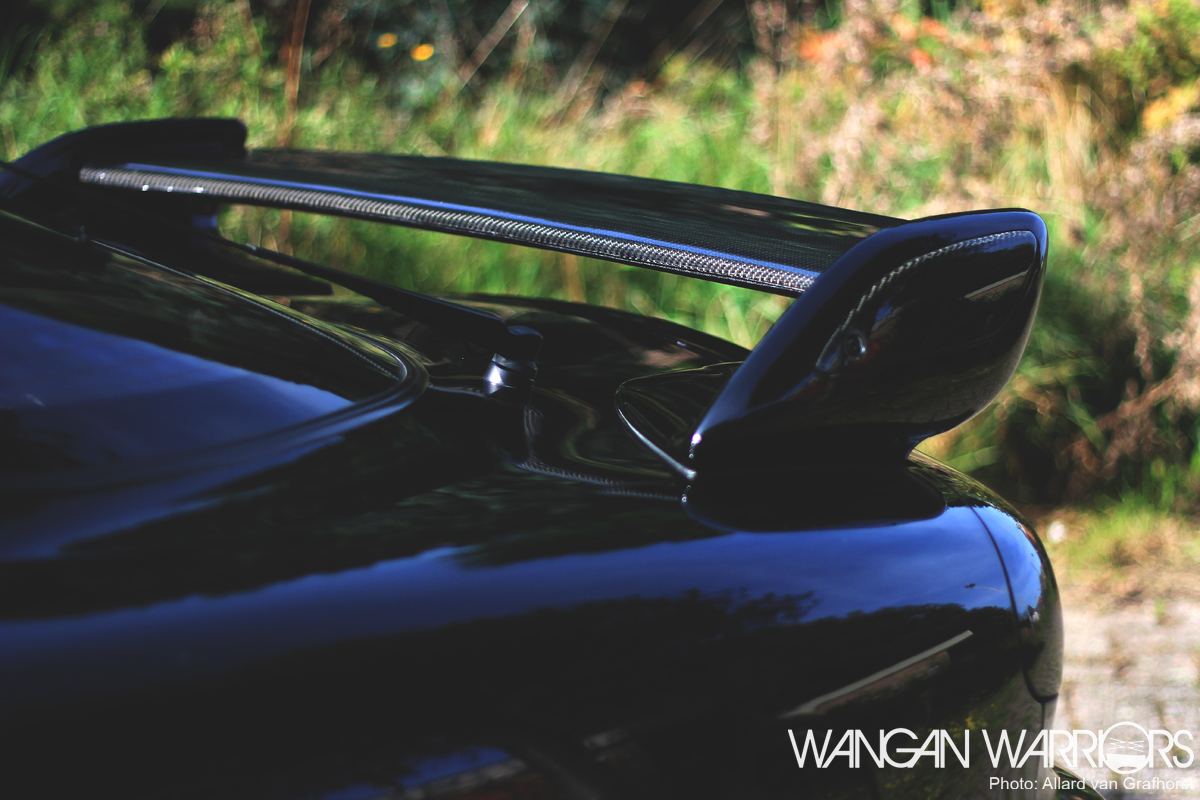 That’s exactly one of the reasons Beschier kept things relatively stock. A ’99 model spoiler with carbon insert and end caps, ’99 rear lights, feed side skirts, and a headlight cover with air intake and you’re done! The rotary engine isn’t underpowered as it is with a 0 to 100 (KMH) in just over 5 seconds, so the main upgrades under the hood are to keep the engine cool. An aluminium radiator, aluminium hard pipes for the intercooler and every single hose has been replaced for silicon versions to ensure that the engine will remain healthy for a long time. 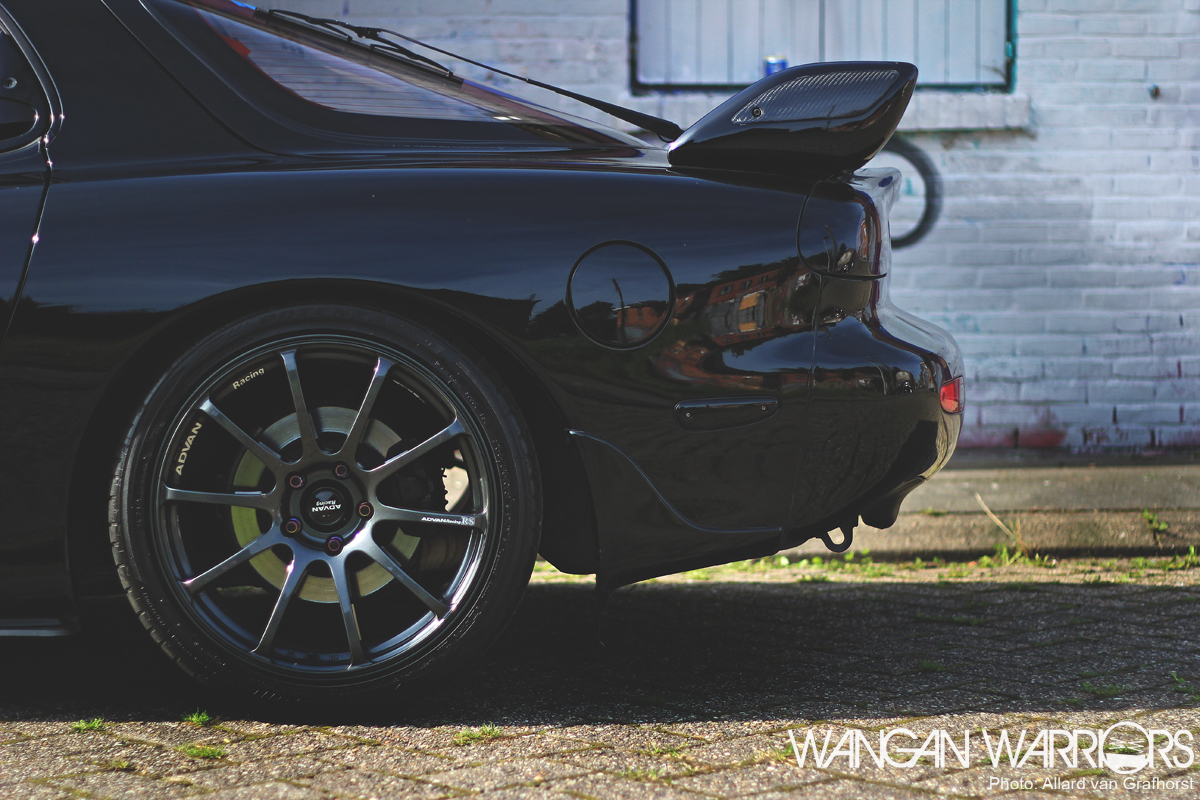 I keep saying that wheels will make or break a car but I think Beschier made a brilliant choice. The Advan RS in 18 inch x 9J suit the arches perfectly, also made possible by the BC racing coilovers. Thanks to all these subtle additions to an already great design it looks like a car you would come across on the Wangan or at Daikoku PA. 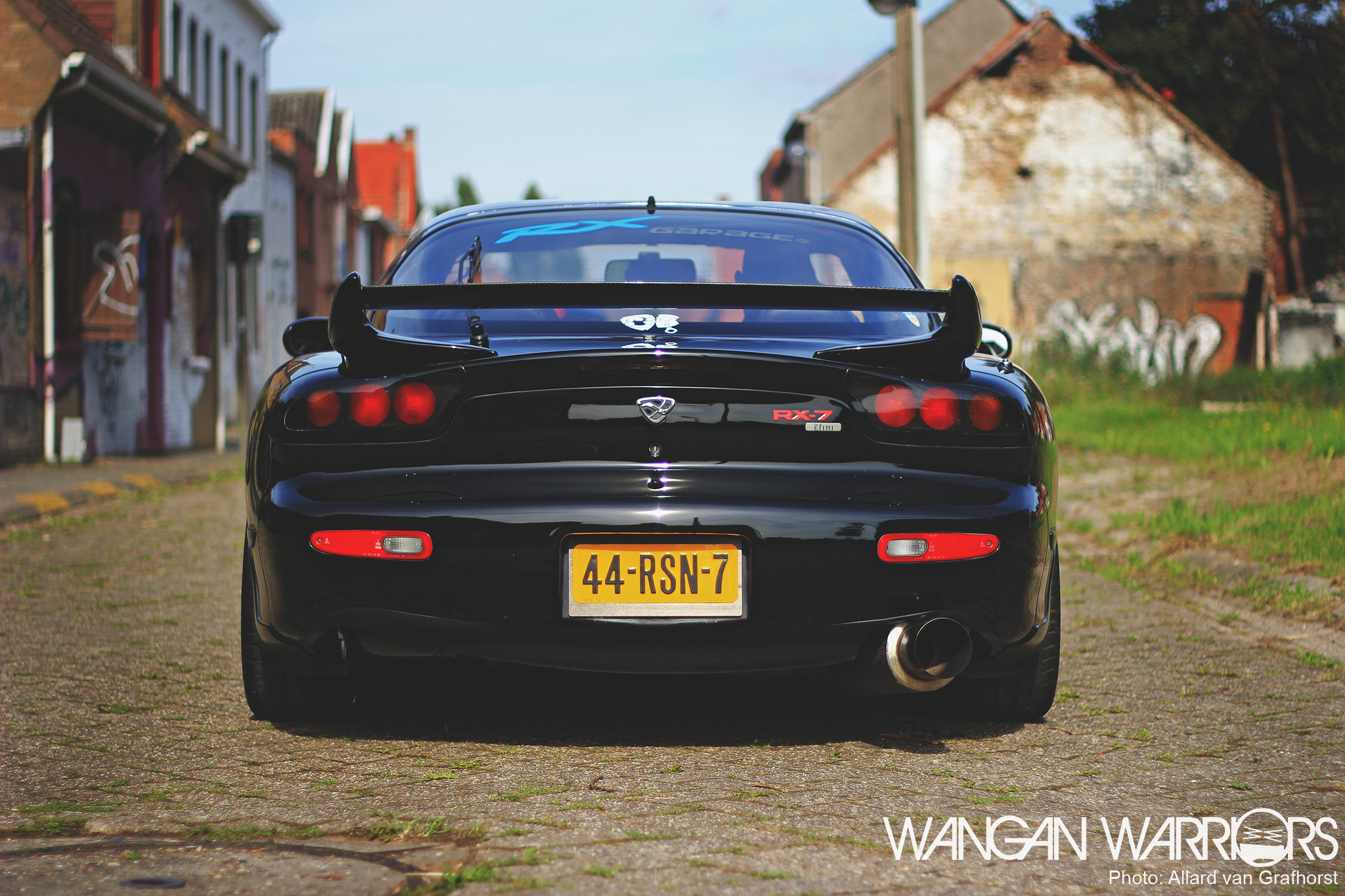 All I can say is that one day I will own own one, just so that I can tap that ass every day! 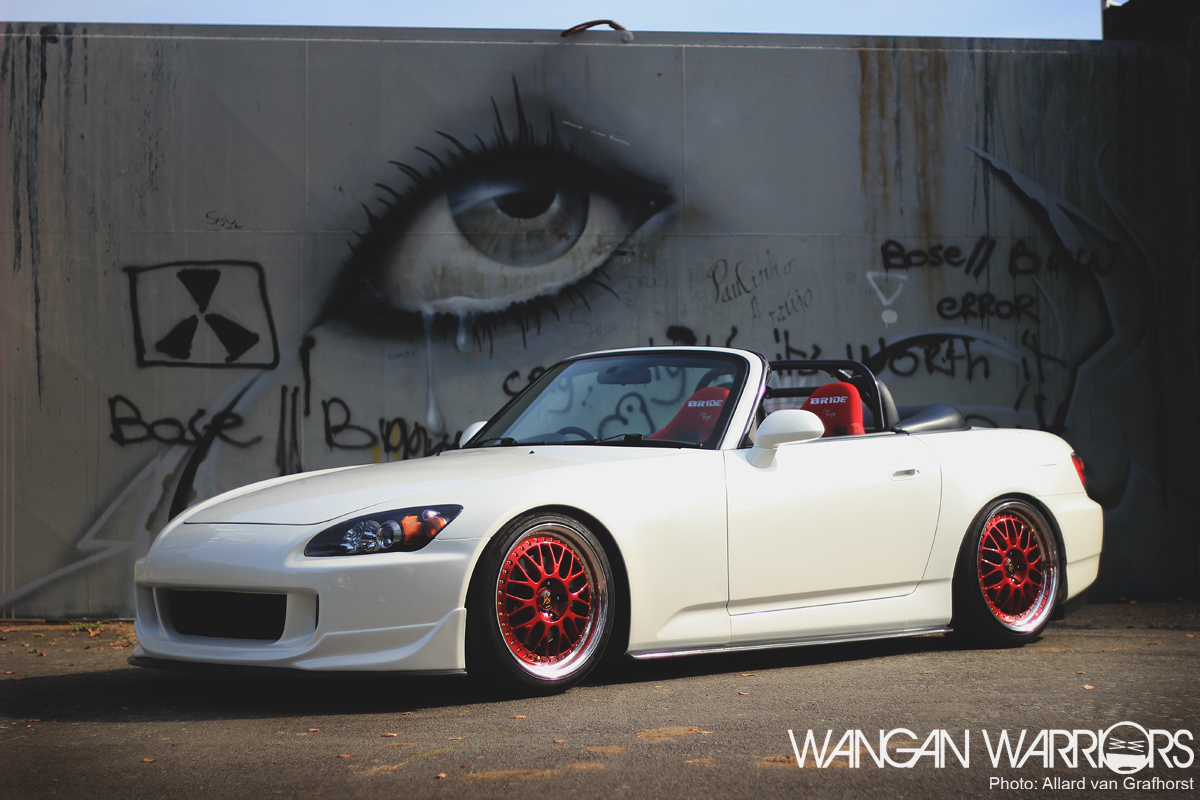 White dress, red shoes – Robin’s immaculate S2K
There is clean and there is Robin’s S2K. Clean is an understatement so let me put it this way. It’s ultramegasuperduper clean level is over 9000! From the moment I laid eyes on this car I knew I had to get it in front of my camera. Luckily for me, Robin was more than happy to oblige and as it happens the city of Doel is one of the most photo genetic villages this side of the planet. 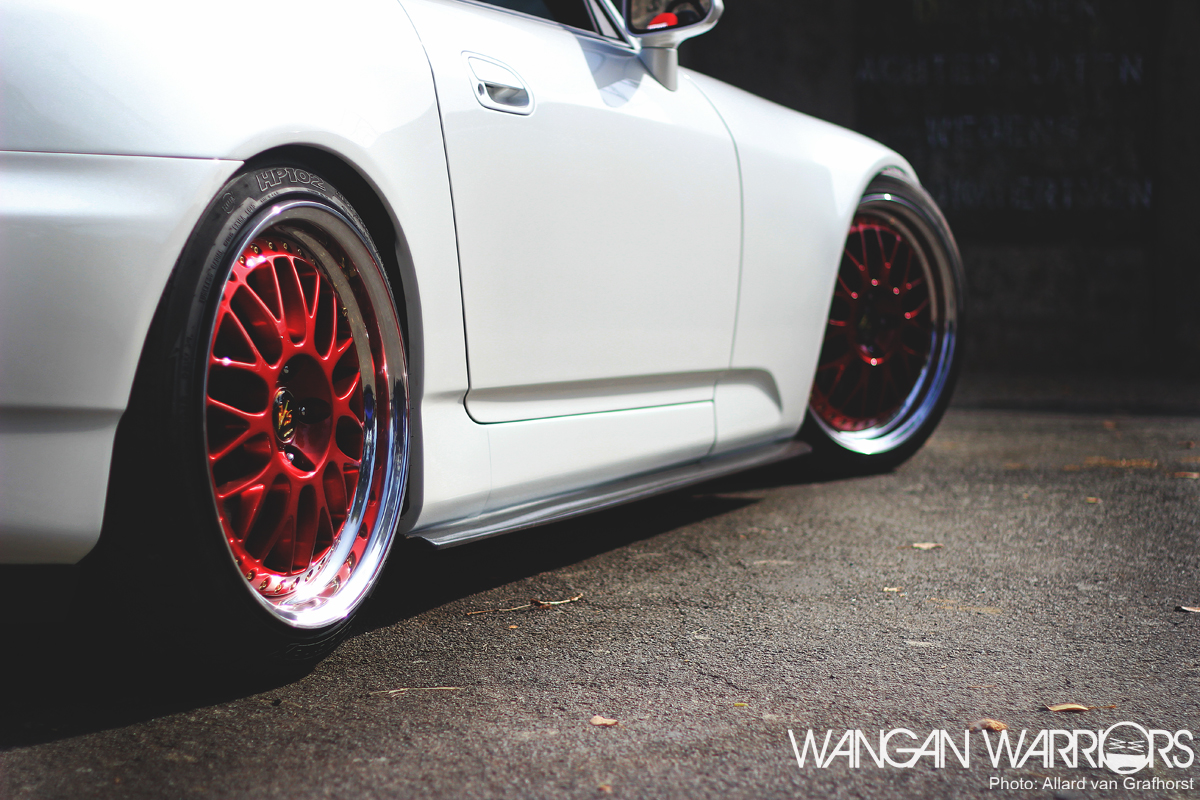 I’ll start with my favorite part of the car which also happens to be my favorite wheel of all time, the Work VS-XX. Normally you see these in silver or gold but Robin opted for a candy apple red finish which make them even pop out more against the in Nissan QM1 white resprayed bodywork! The car is low but quite functional thanks to the race logic suspension setup. 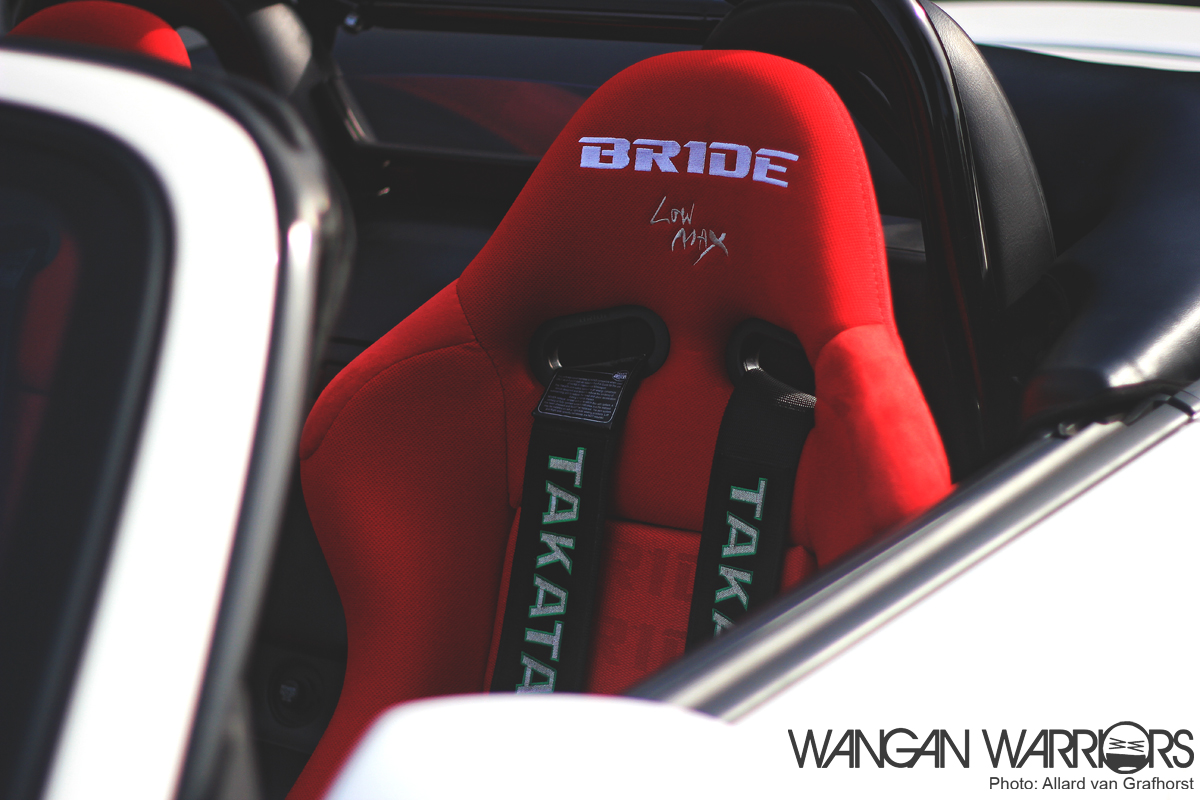 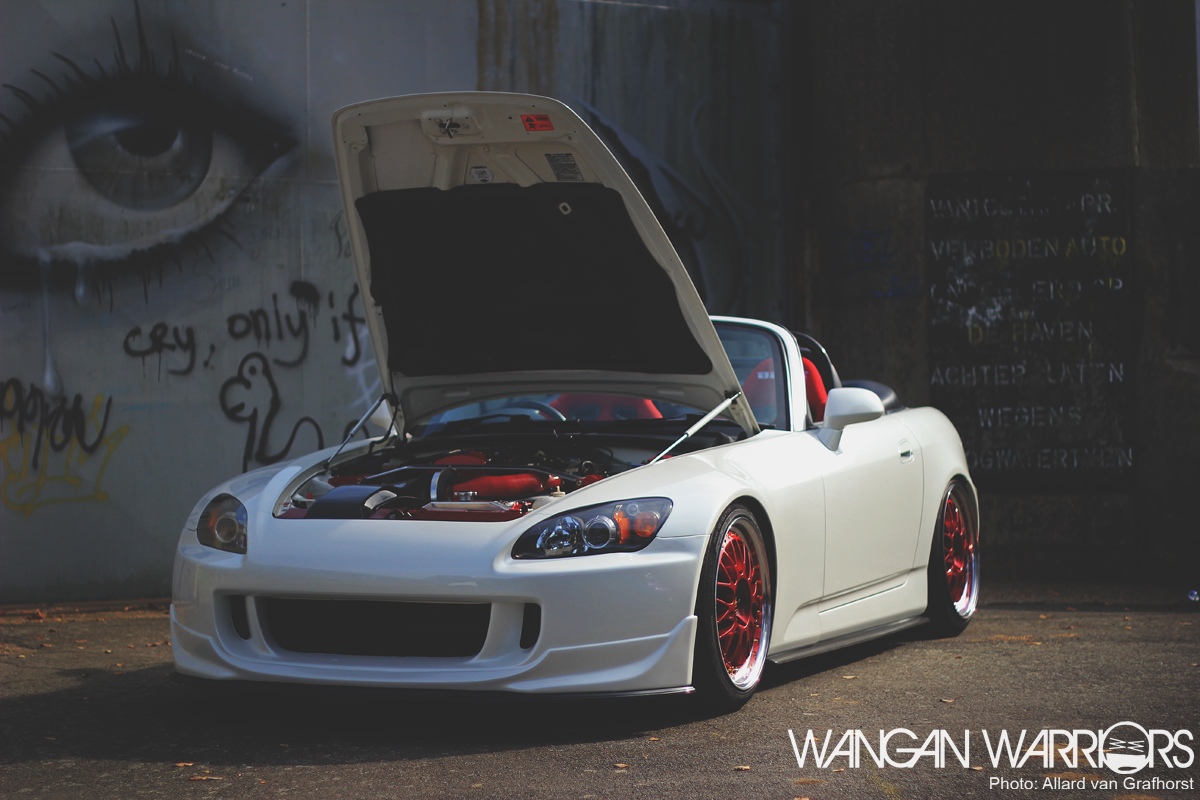 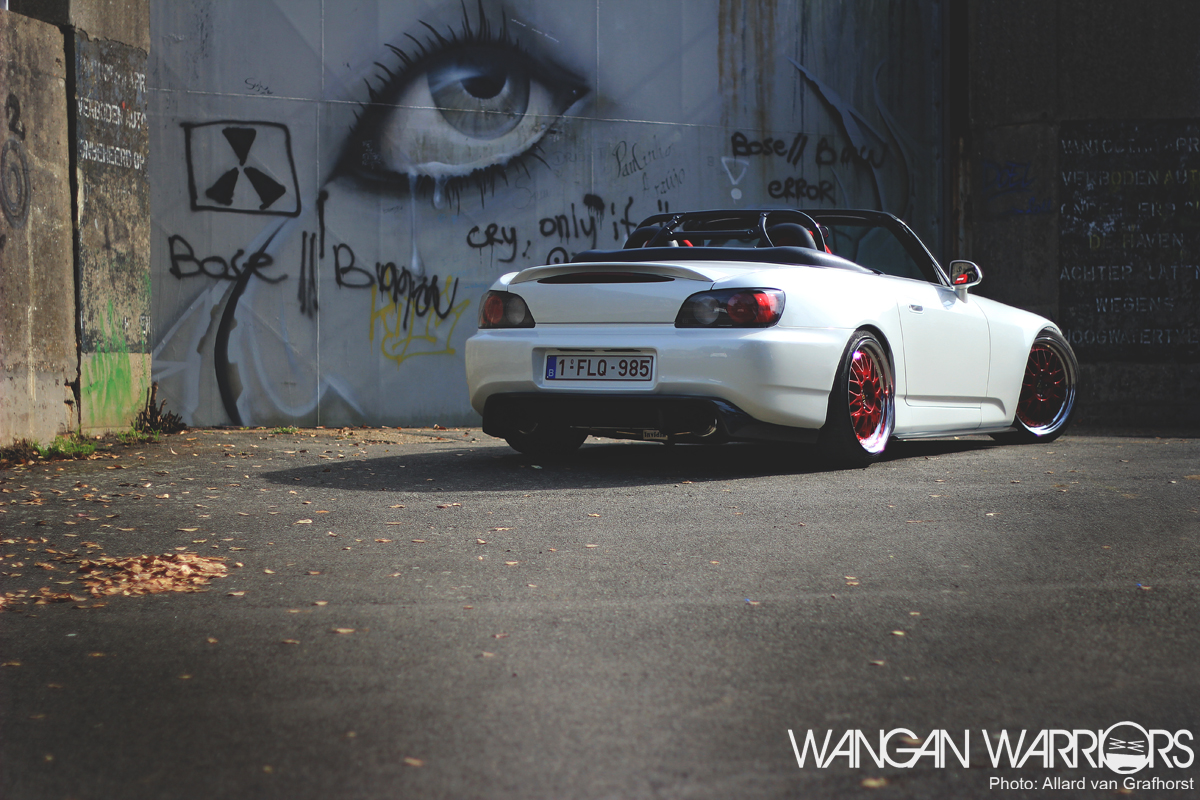 Like Beschier’s RX-7 this car also has acquired the perfect ride hight in my opinion and with the addition of a carbon diffuser, skirts and front lip the car really looks the part! Carbon goodies always look nice on a white or silver car, especially with the red wheels, but this car in particular is an eye-catcher in it’s purest form and one of my favorites of the show! 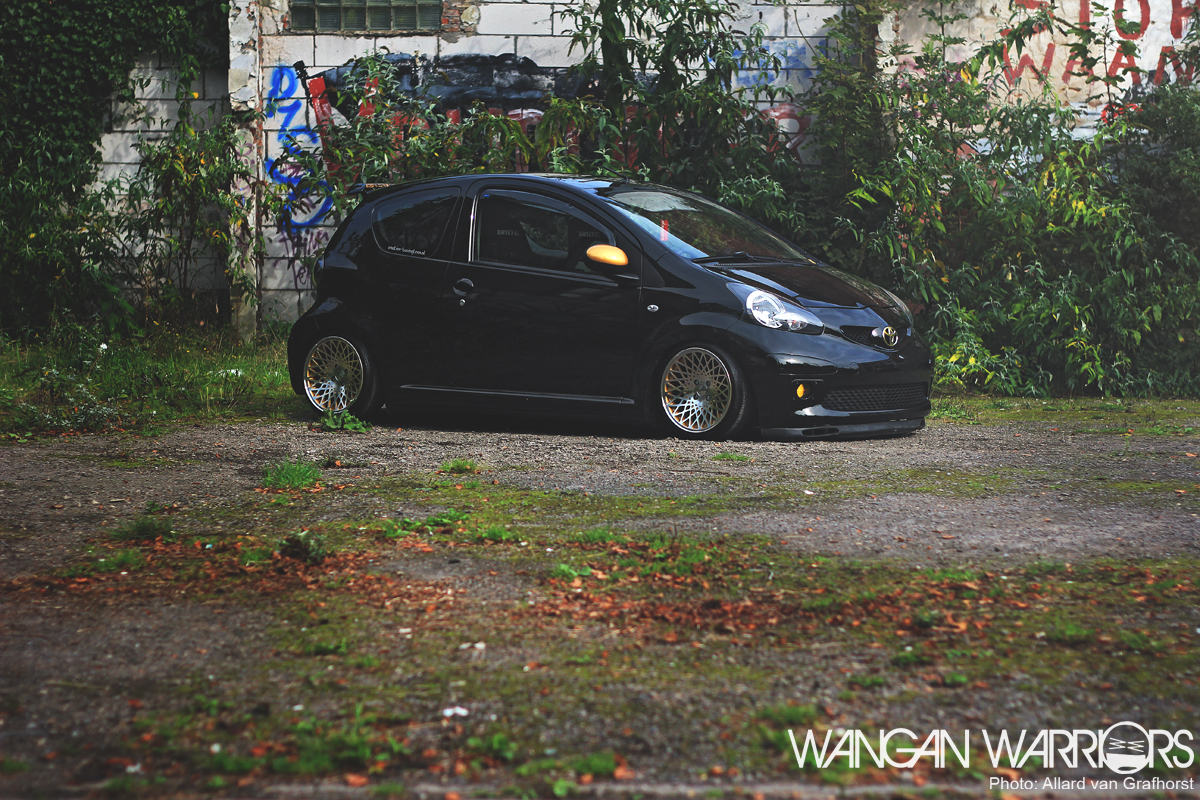 Doing things different – Willem’s zero f*cks given Aygo
I met Willem a few months ago during a trip to the Nürburgring and don’t let the stanced look fool you because that same trip I saw him hauling ass around the green hell! Not only does he drive it hard but he drives it daily as well. 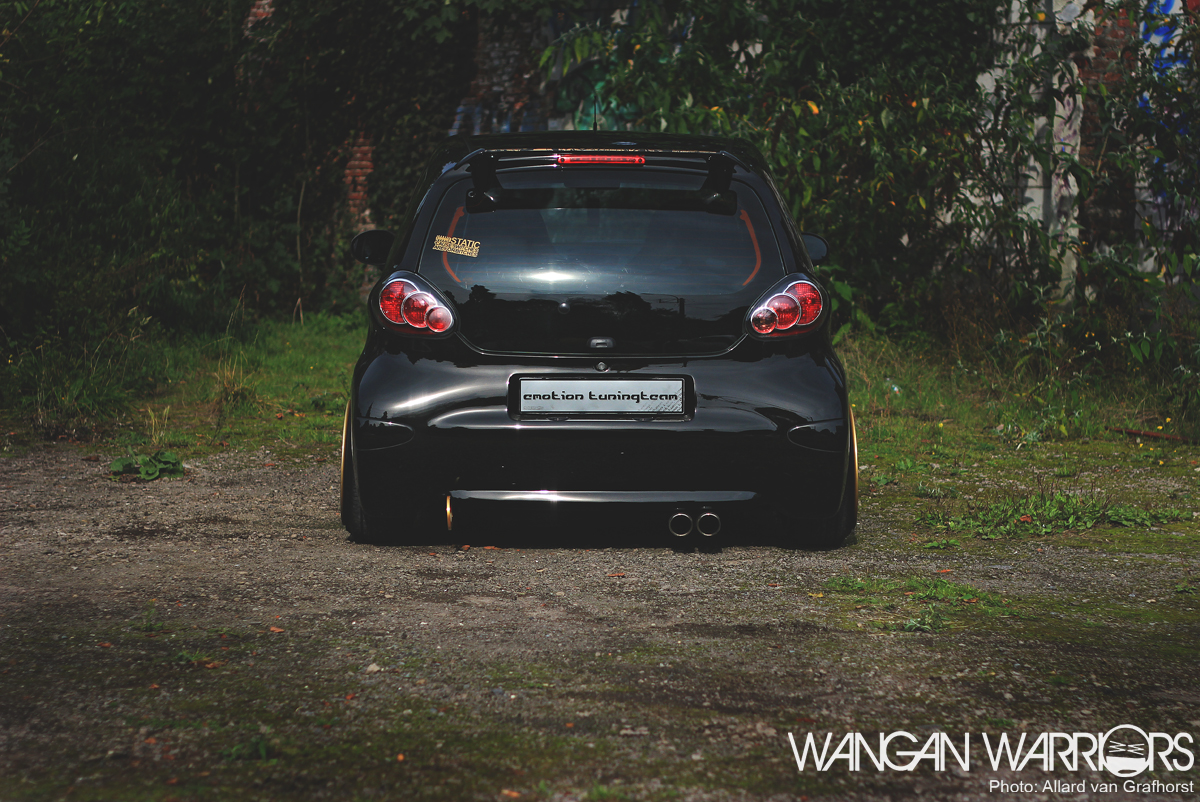 I have had the pleasure of shooting everything from a Hakosuka to a 900bhp Supra.
I’ve been to Japan purely for the sake of cars, and I’ve seen some pretty epic Kei cars in the land of the Rising Sun, but an Aygo? I guess there’s a first time for everything, but why do I like it you say? 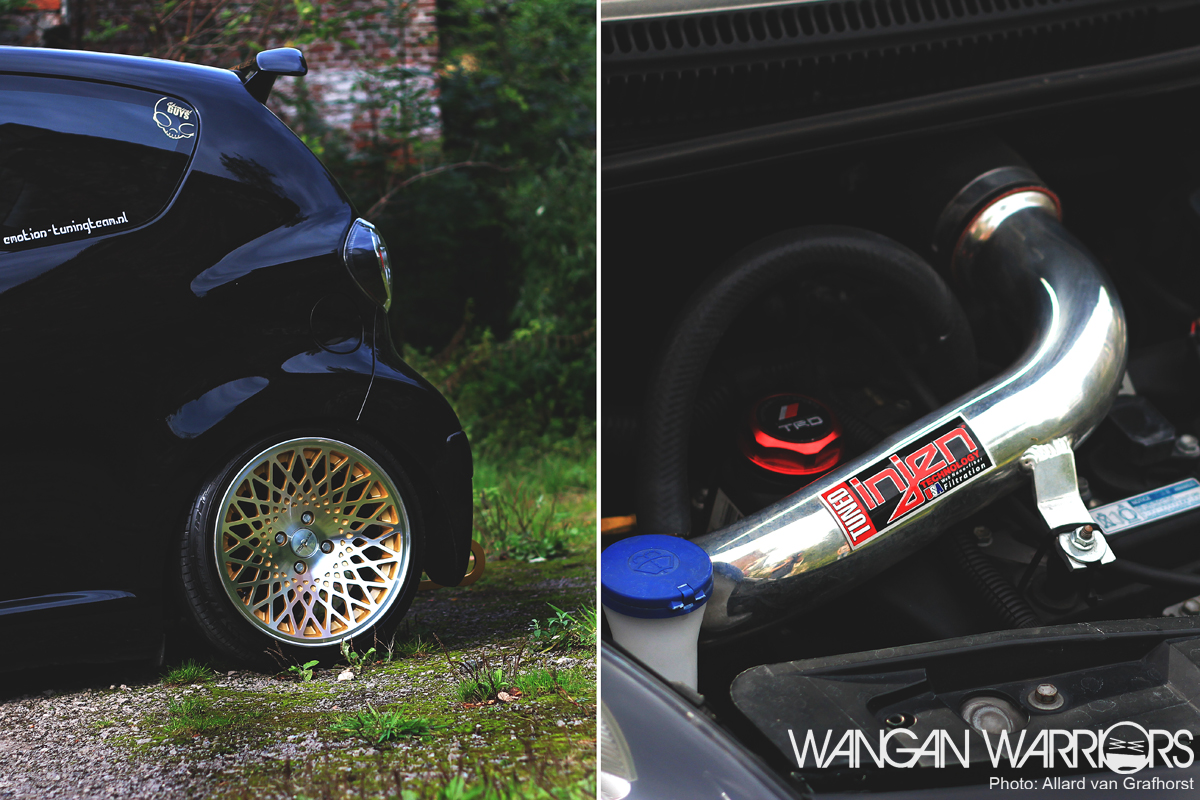 Because it’s something different, and while that isn’t always a good thing, this Aygo is absolutely different in the best way possible. From the 15×8 Stance Encore wheels to the Injen cold air intake, Willem has left no stone unturned to find the best parts possible for a car that doesn’t exactly grace the front page of any parts catalogue. 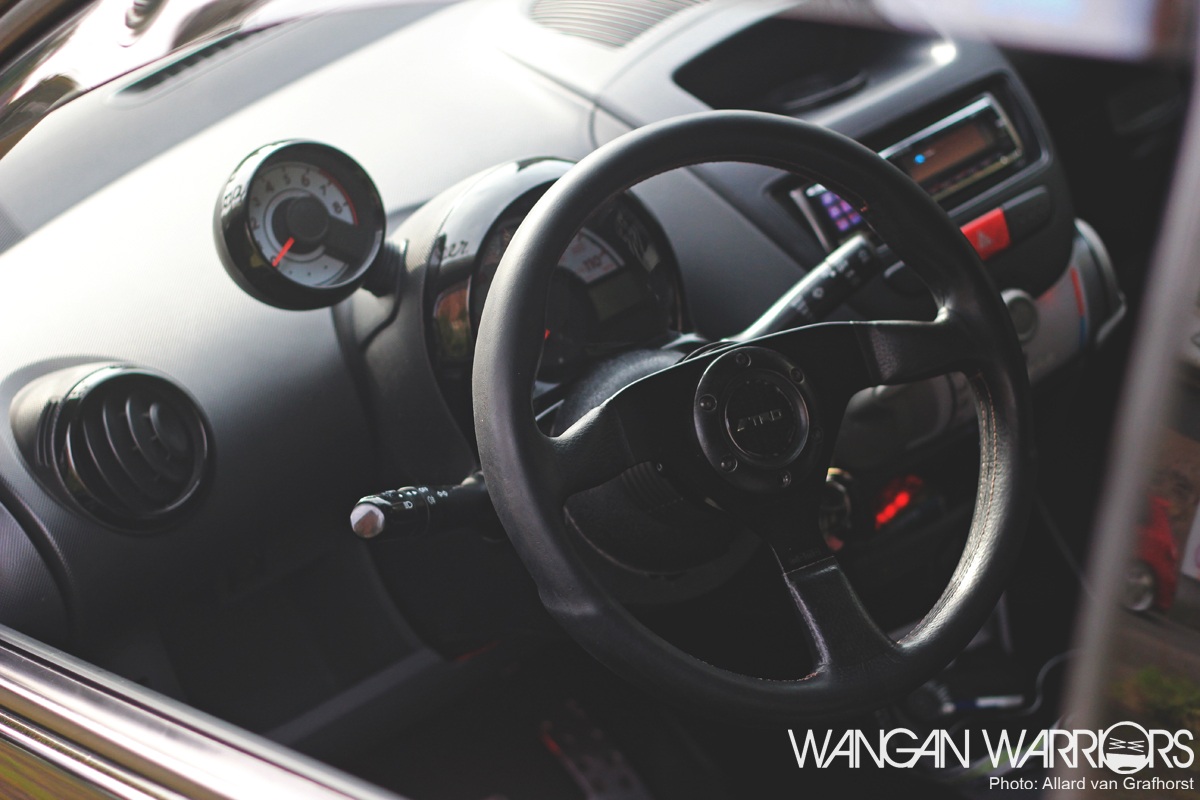 But when you look at details you will find that the little Aygo has actually more racing pedigree than you would think. The separate rev counter for example!
And with the Momo steering wheel, Bride seats, extended shift knob Willem makes sure that the car feels like a proper race car as well when he scrapes over the Ring. 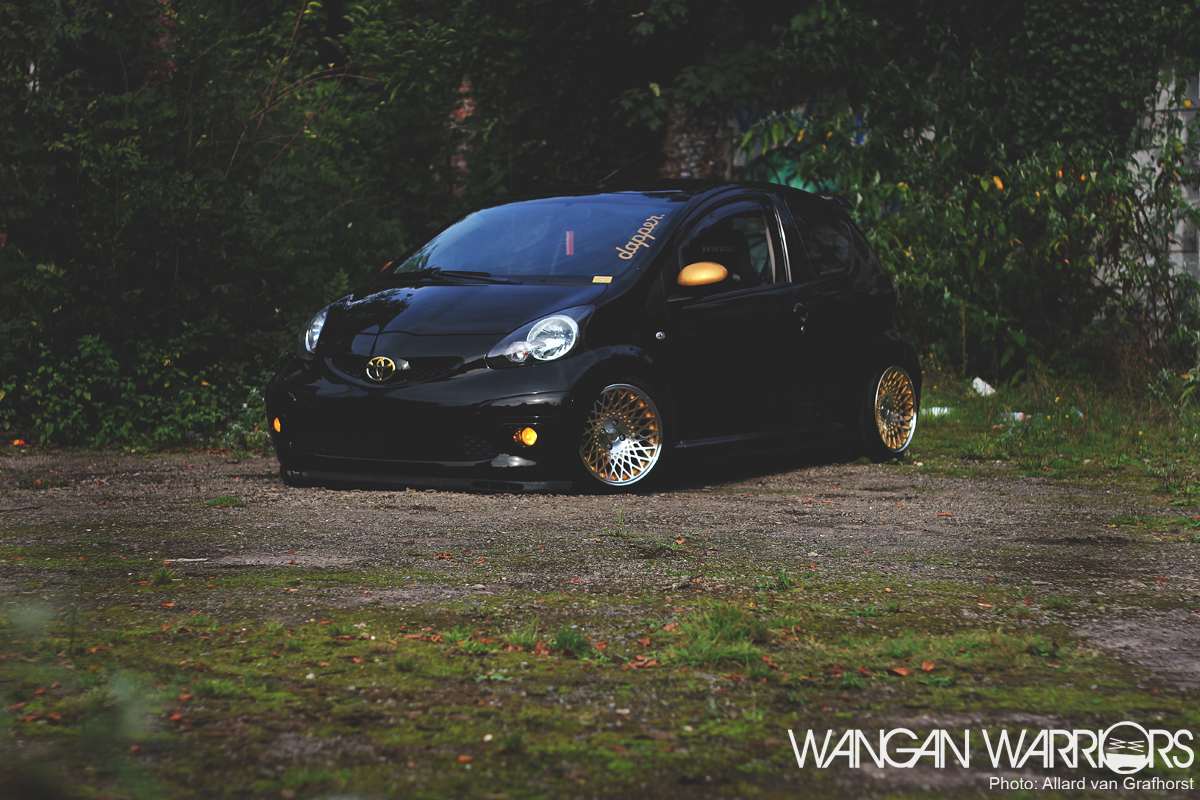 The Weitec coilovers are responsible for getting the car this low and being a KW suspension sub brand it also makes sure that the car still handles great despite the ultra low stance.

Three cars, three styles. All three executed perfectly in their own way if you ask me!
Not as outrageous as some other cars at the show but all three of these cars represent all the things I love; Clean, different and zero f*cks given!