Every once in a while we come across amazing projects, projects which we usually don’t find very easily but I have the feeling that this has changed. Lately it seems we’re on top of things and we’re bringing you some of the most exclusive stuff we’ve ever shot; don’t you agree? Well it’s indeed quite easy for me to say, because I know what our bloggers are up to in the coming weeks and months. With Allard covering the immaculate S14 in the Raising The Bar series and the masterly Soarer of Albin Droogsma, I’m happy to follow that up with something we don’t see every day either. And no, this is not the last of it because our very own Alex will share some grandiose work as well. Just sit tight! 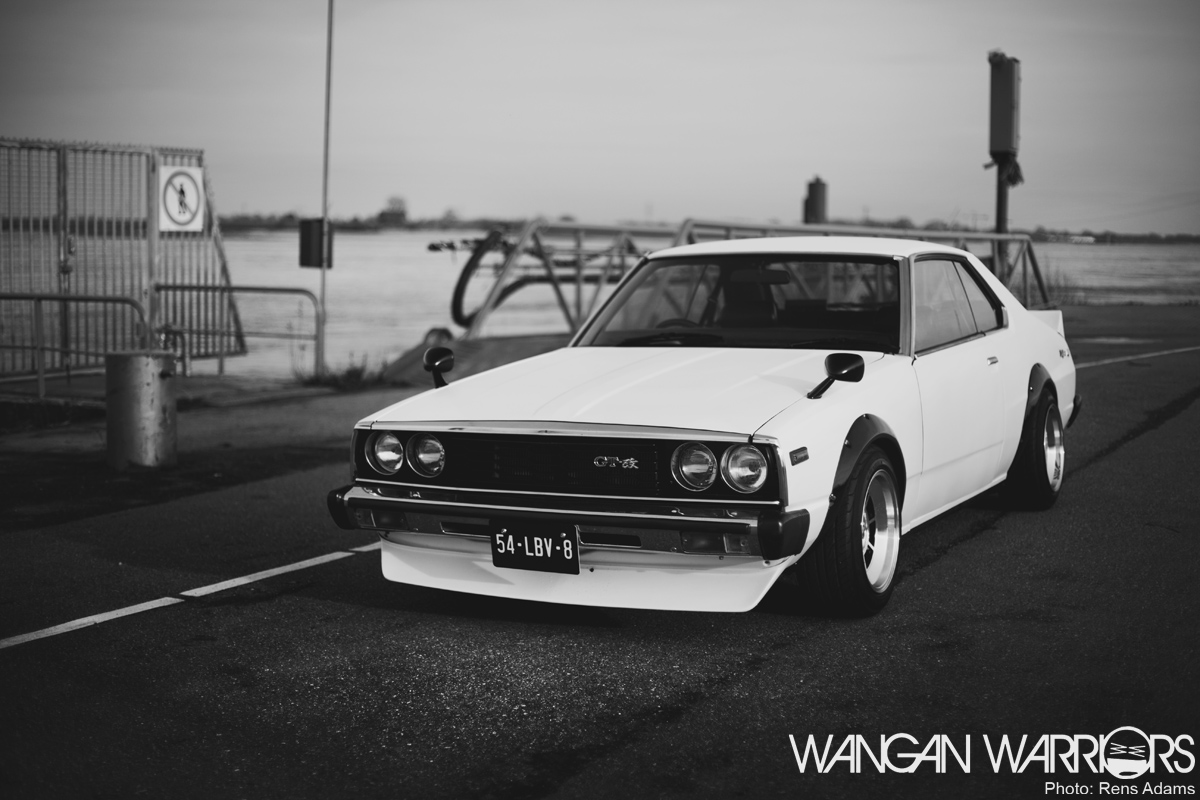 So let’s proceed. By now you’ve seen two photographs and an intro which tells nothing about the reputable Datsun Skyline C210 of Carlo de Grundt but you’re about to find out all there is to know about it. I recall helping out with the Japanese car selection for DUMPd2012 and receiving e-mails of Carlo with this project. 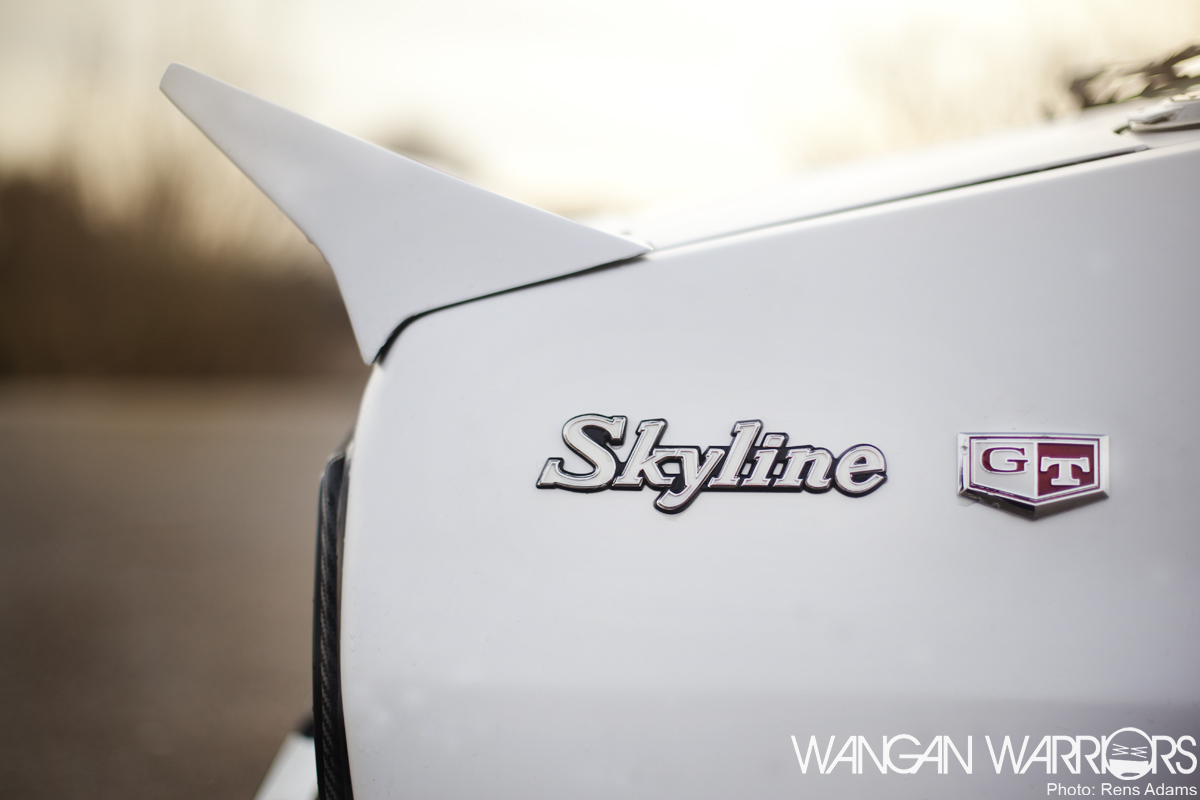 He told us that the project would be done in time, but we had strict rules not to offer indoor spots to unfinished projects. I was surprised Carlo made it after all and I remember telling a few people how hard the owner must have worked to get the car done in time. I saw pictures of the Skyline not long before the main event and it was in a condition of… Well let’s say I thought it wouldn’t be seen outside of the garage any time soon. 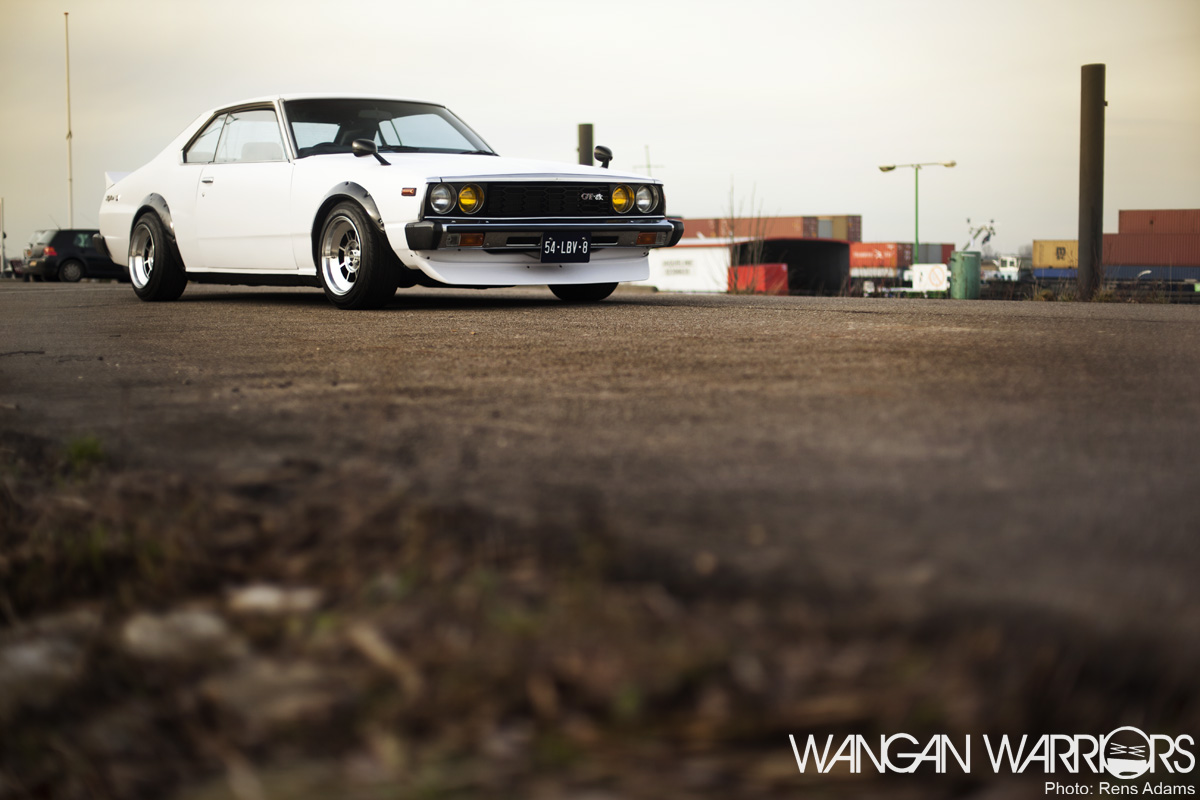 I don’t like to admit this, but luckily I was wrong. Carlo attended DMPD two times in a row and visited some of our Wangan Warriors meets and yet there is no blog I can find with a feature of this beautiful classic legend. I met up with Carlo at his home where I was about to find out Carlo is a proper Datsun freak. Maybe we’ll visit him again to see what he’s up to, how does that sound? 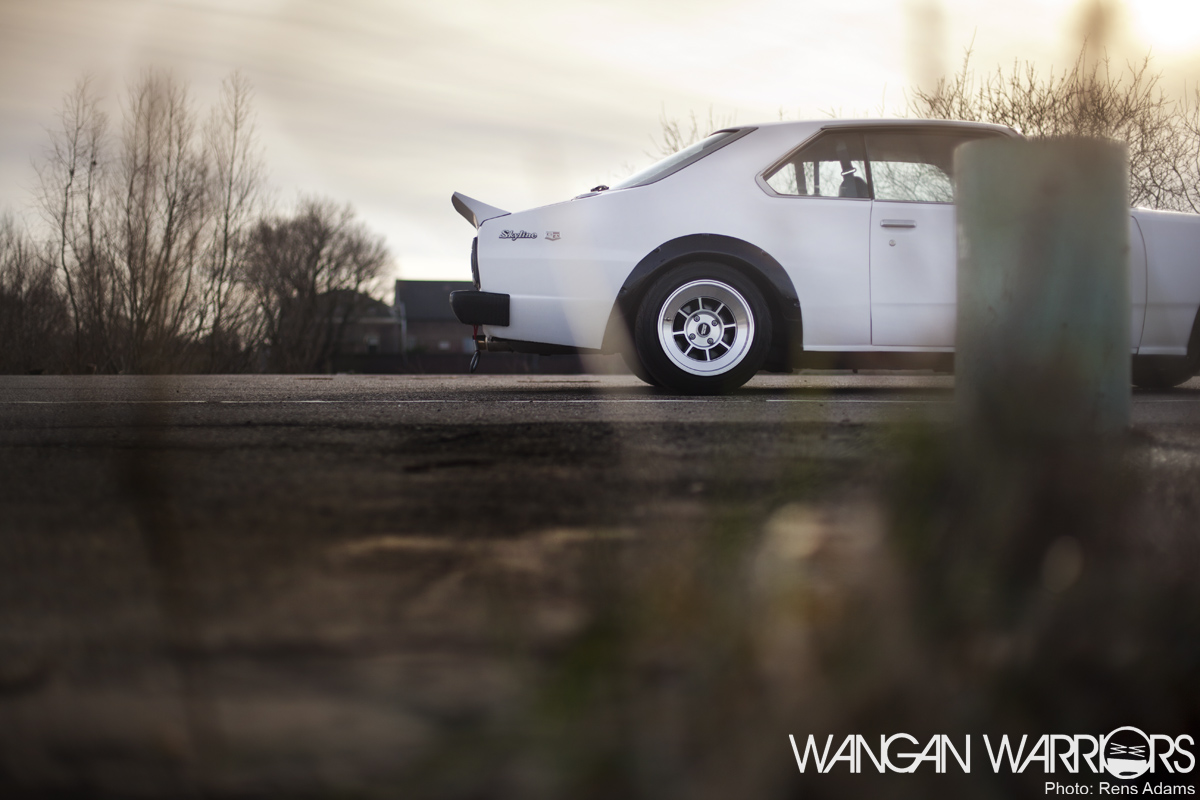 For now let’s focus on the Skyline. We drove to a dock near the Waal river not far from his home which was a nice place to do the static part of the photoshoot. Since Carlo is a professional car wrapper he chose to wrap the Datsun in matte white film and I have to say it really suits the car. 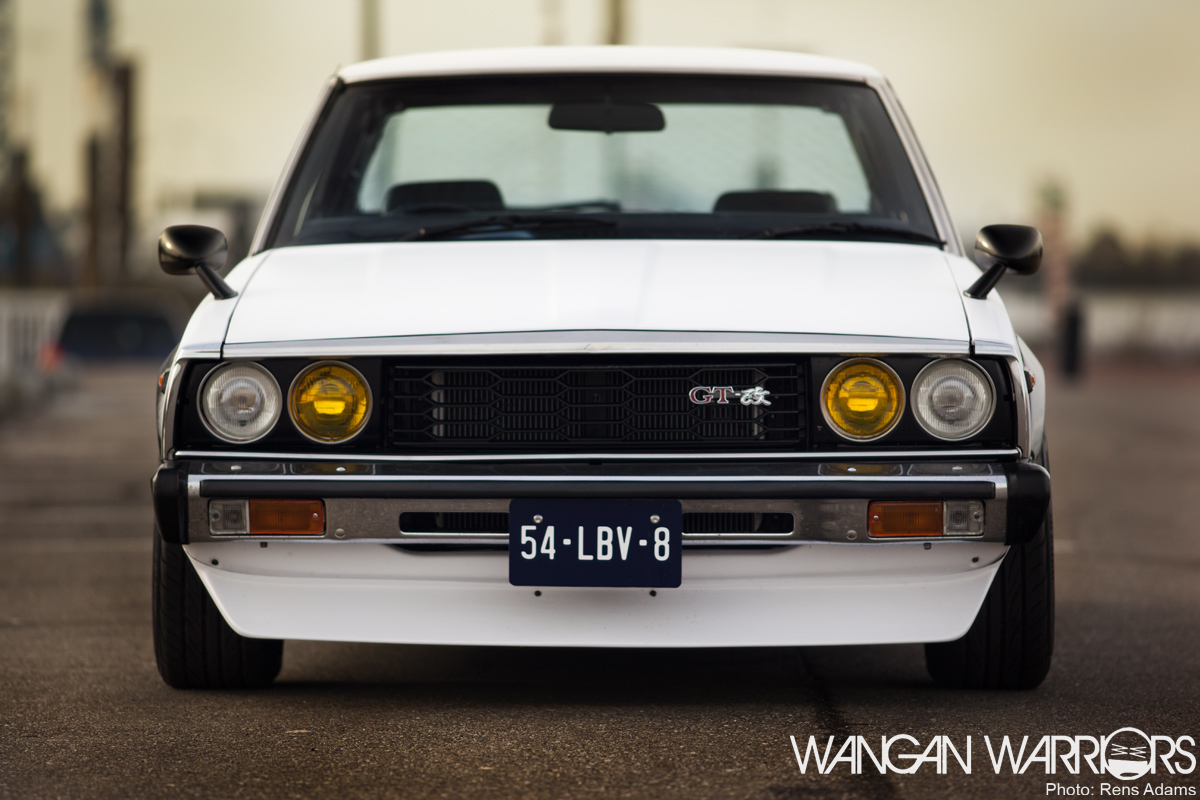 Carlo did all of the restaurations himself in his workspace behind his house. The benefit for Carlo is that he has a large workplace at home for his work and hobby. As I said Carlo is a real Datsun enthousiast and what I found in his garage was far from what I see every day. 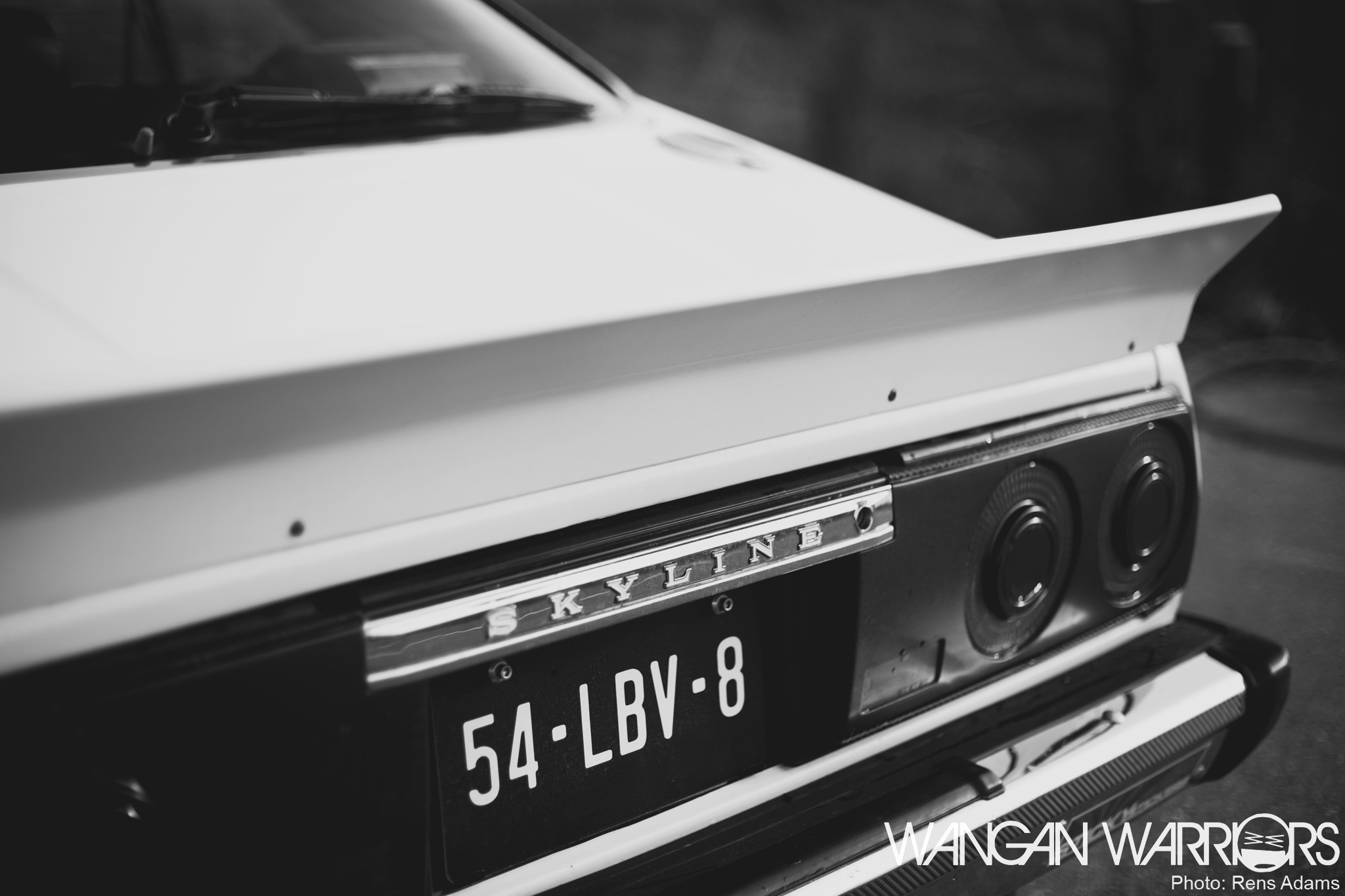 He showed me his ’77 Datsun 620 pickup, which he’s currently restoring bit by bit and I also spotted a little more familiar car and that was the ’75 Datsun 610 Wagon, which already has some modifications but maybe we’ll elaborate a litte more on those projects in the future. 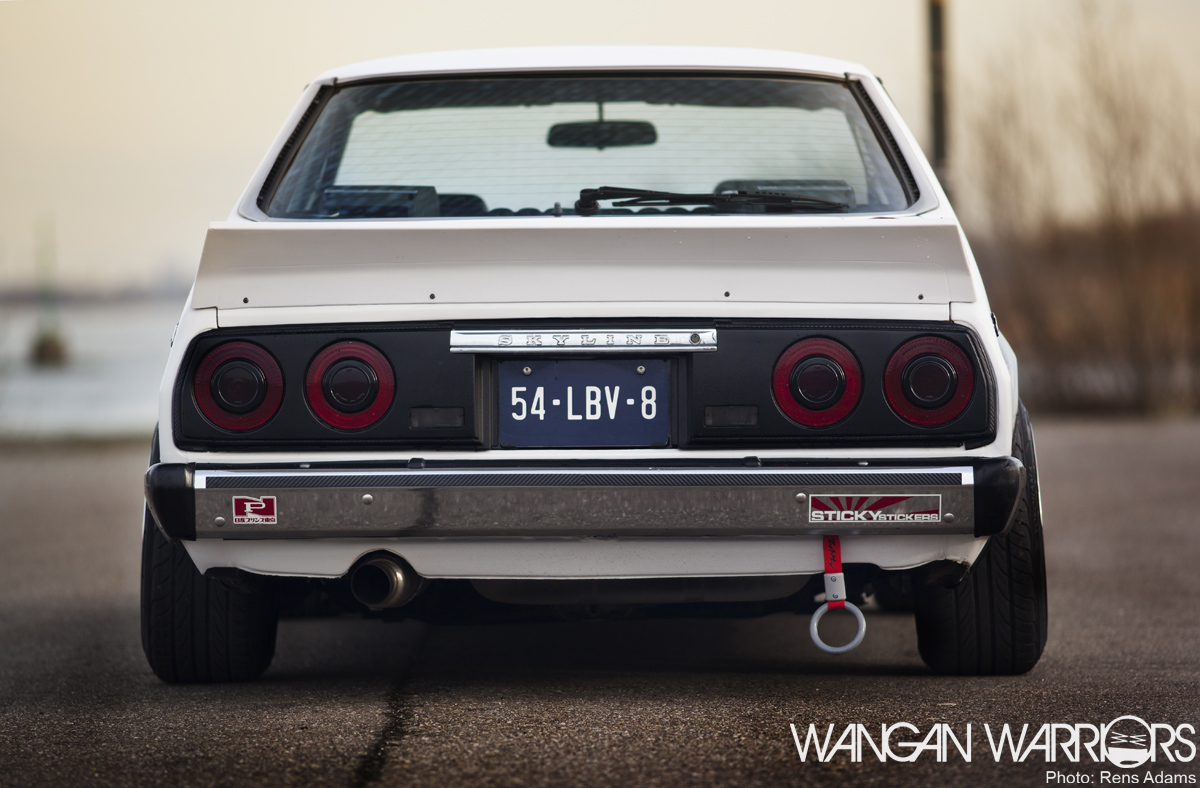 I really enjoy seeing Carlo keeping things authentic and original. Projects such as the C210 should keep their original character and only minor modifications are needed to give a classic car like this a modern impression. The rear end is really finished with the JDM style rear ducktail spoiler. 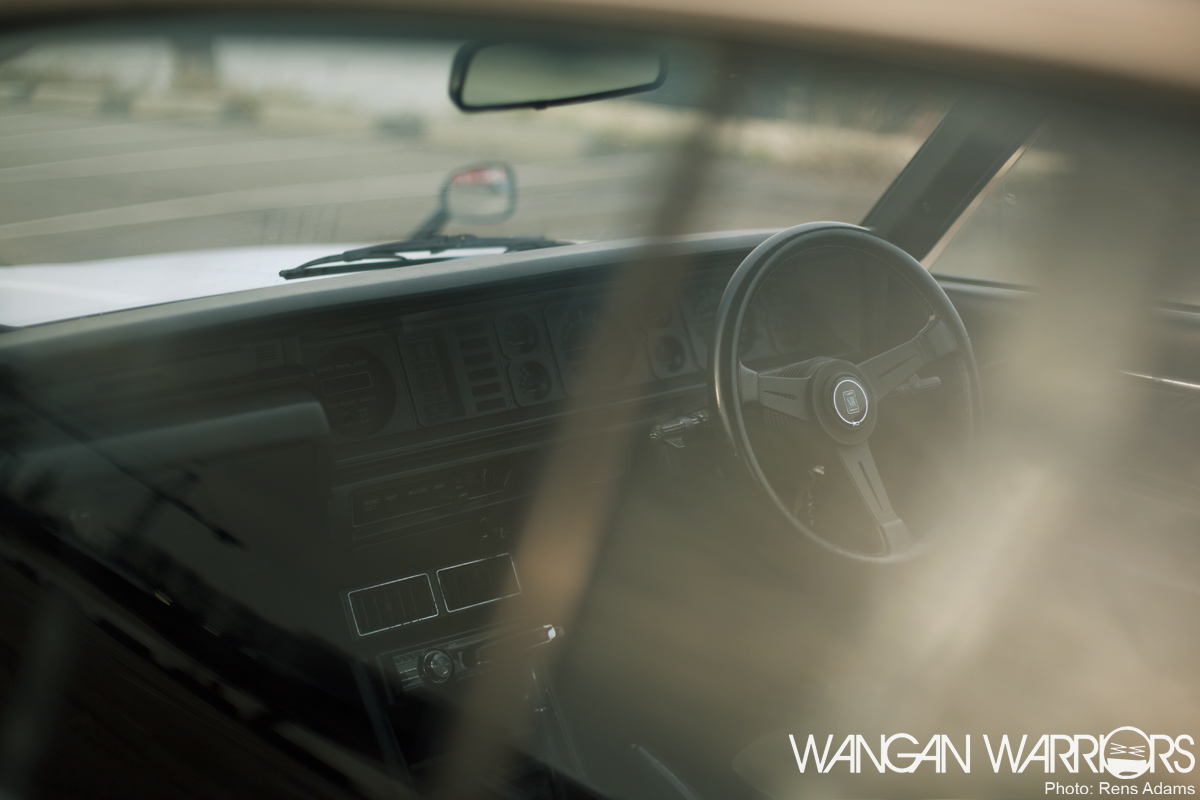 I was amazed to see the interior in such great shape and most of it fairly original. I really don’t think brand new bucketseats, flocked dashboard or a freshly draped interior would suit the car. 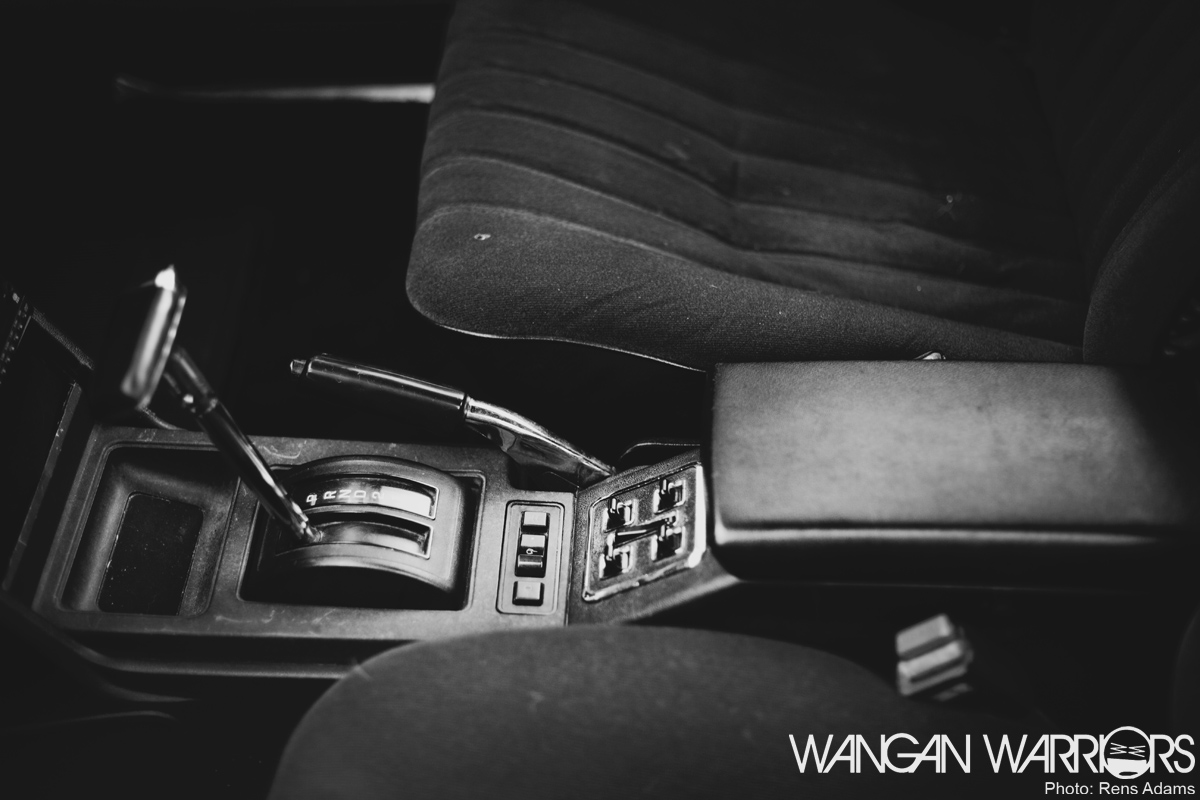 For a classic there is still quite some comfort if you ask me. For instance, the Skyline has electric windows and even though the car is almost 35 years old, it really doesn’t look like a dress that old to be honest. 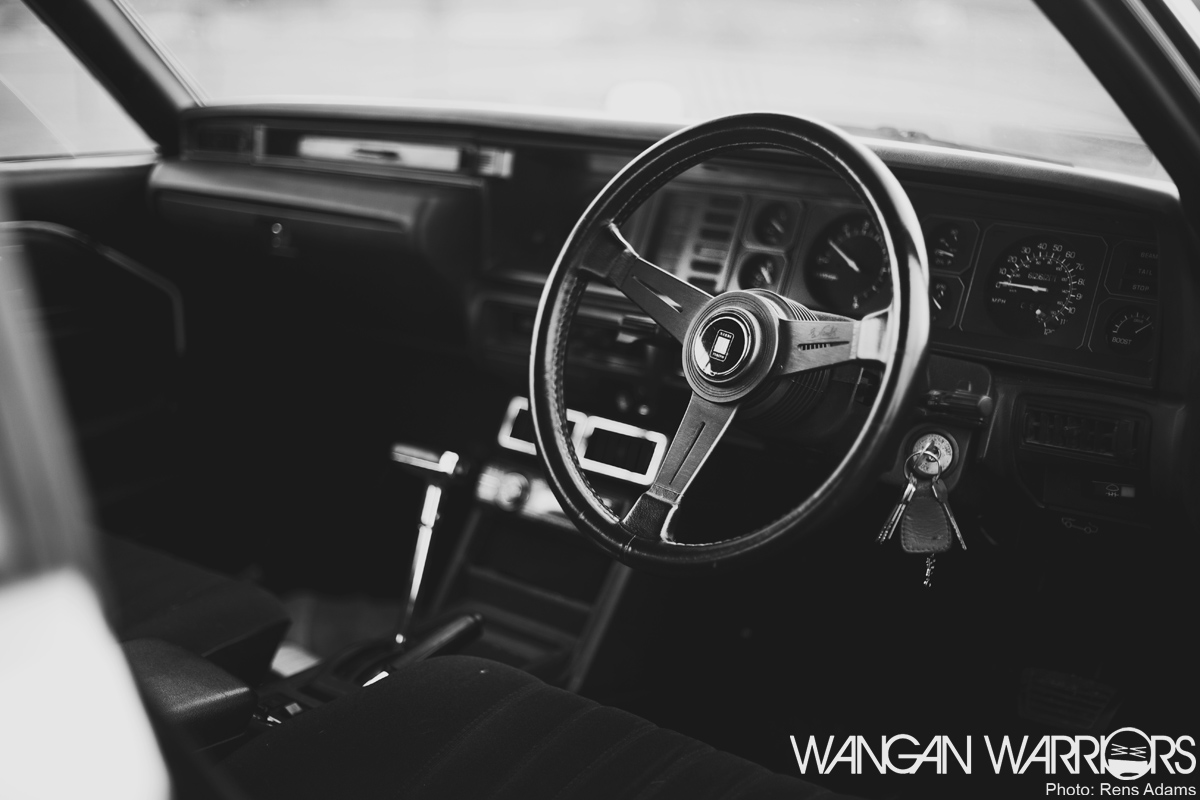 Carlo did replace the original steering wheel for this Nardi example and there really is no way of going wrong with a Nardi, is there? It looks much more modern than the rest of the interior but it doesn’t clash with the classic appearance. 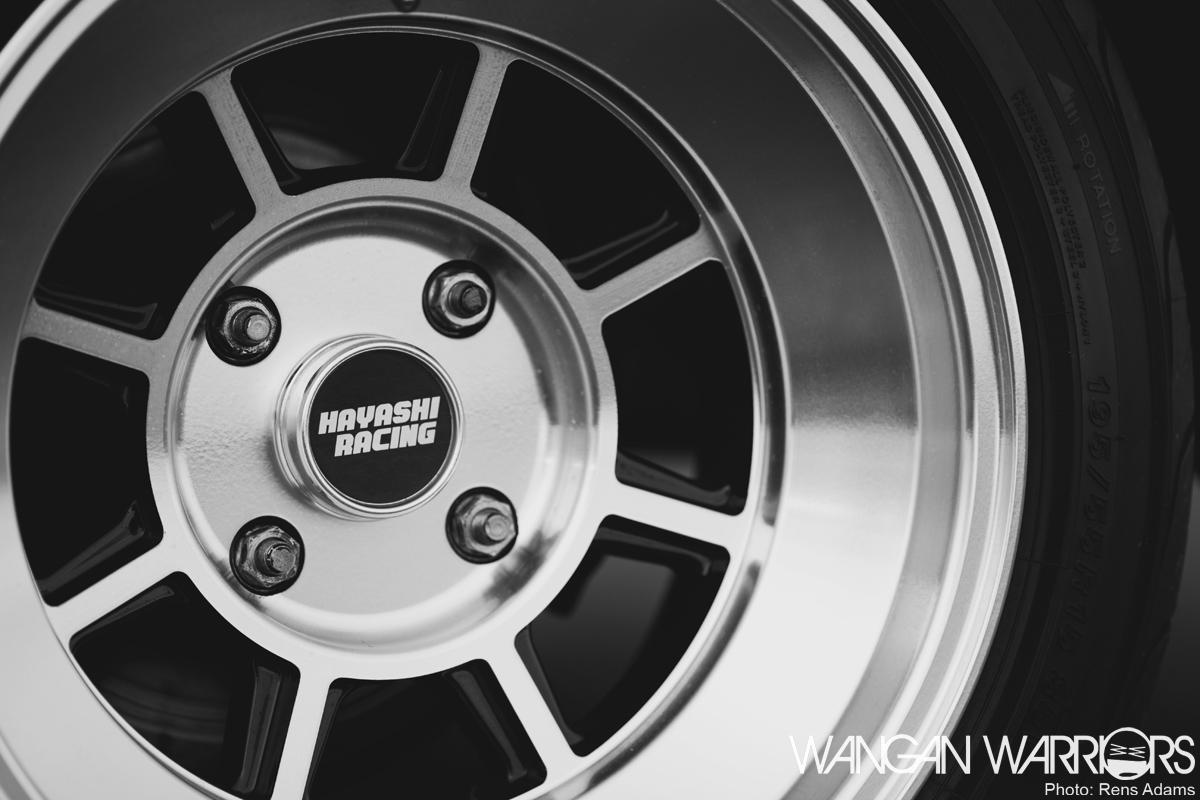 As I was walking around the car several times during the shoot, I almost forgot to take a few shots of the wheels. Carlo washed his car before my arrival, but wheels always get the dirtiest don’t they? Carlo offered to clean them before I started shooting but I’m not the kind of photographer who needs a car spotless, without any drops of water. 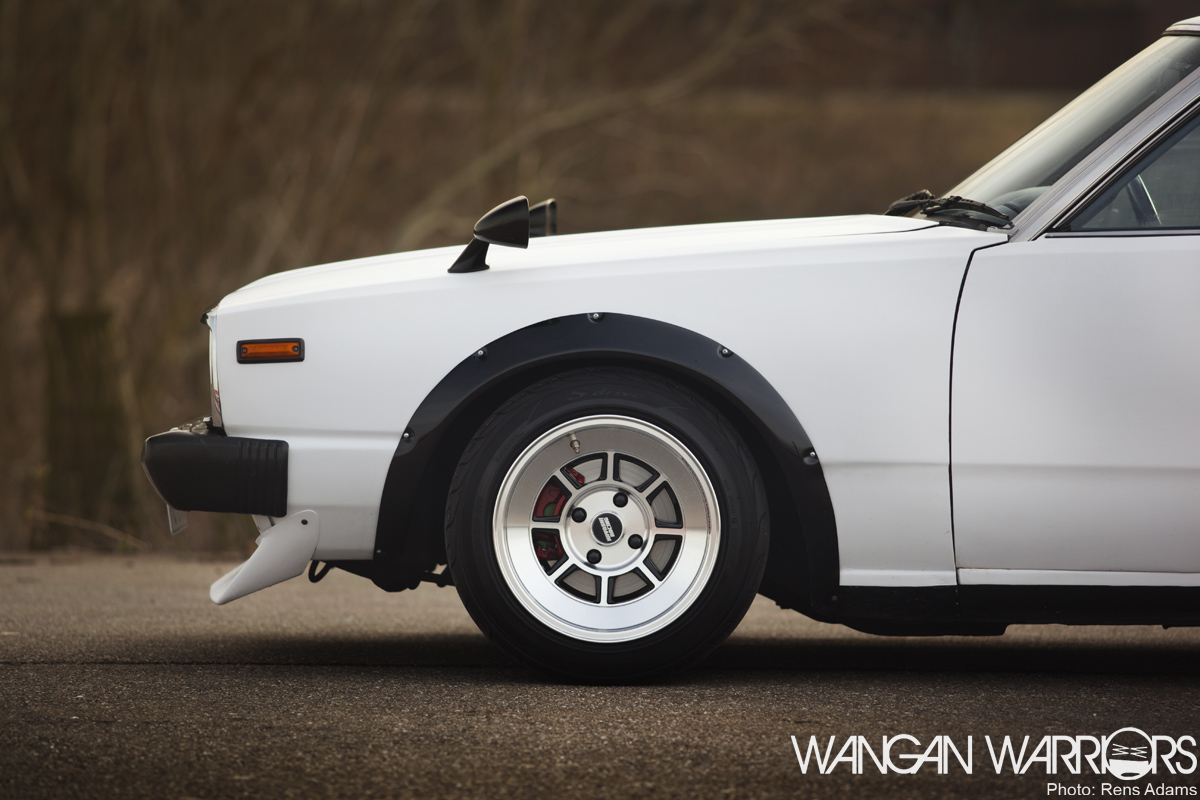 I really like how the Hayashi replicas fit under the car and with the right amount of lowness because of the S13 coilovers, the wheels nicely fall in the arches. Also the fender flares are a really significant feature of the exterior and leave an impression because the’re in contrast with the white wrap. I do favour the the ducktail and the chin spoiler in the same colour as the body. These suit better that way instead of black. 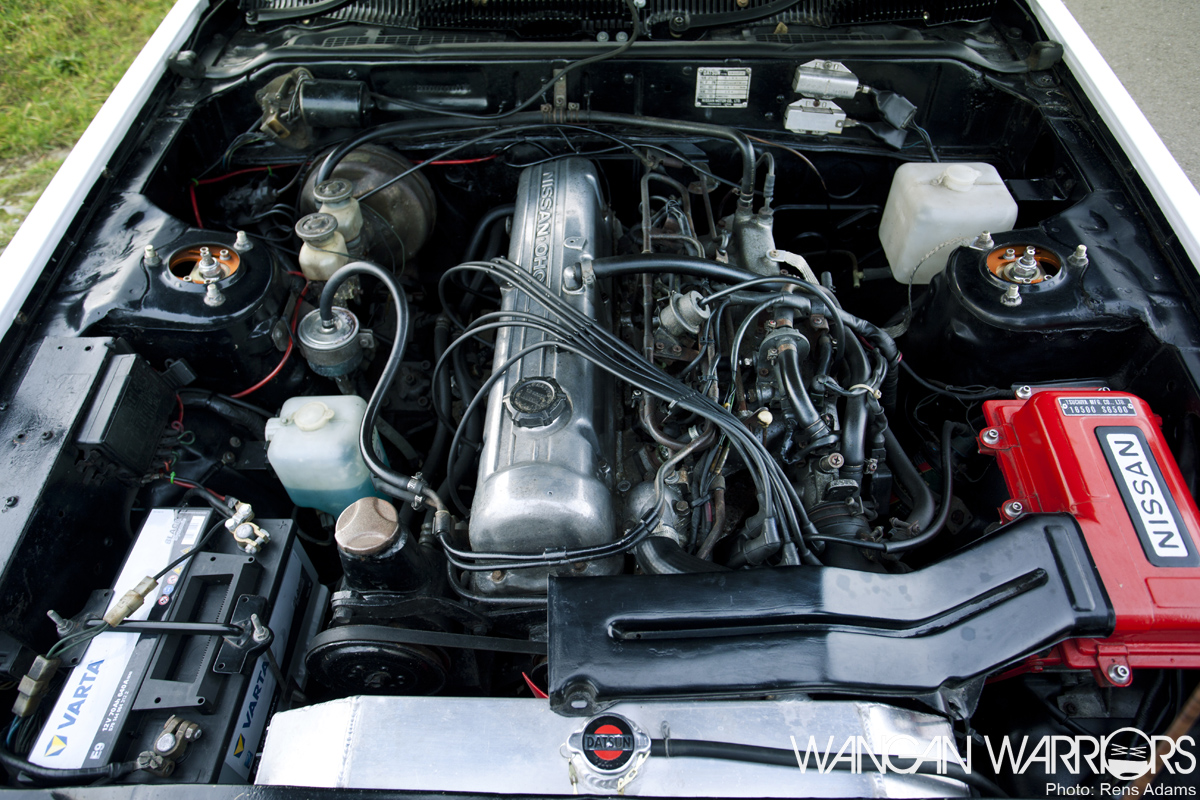 Let’s continue with a look underneath the bonnet, shall we? It would be amazing to see a RB25DET in the enginebay at some point in the future, but for now let’s stay authentic with the original L24E 2.4 6 cilinder, which has a decent 142bhp. 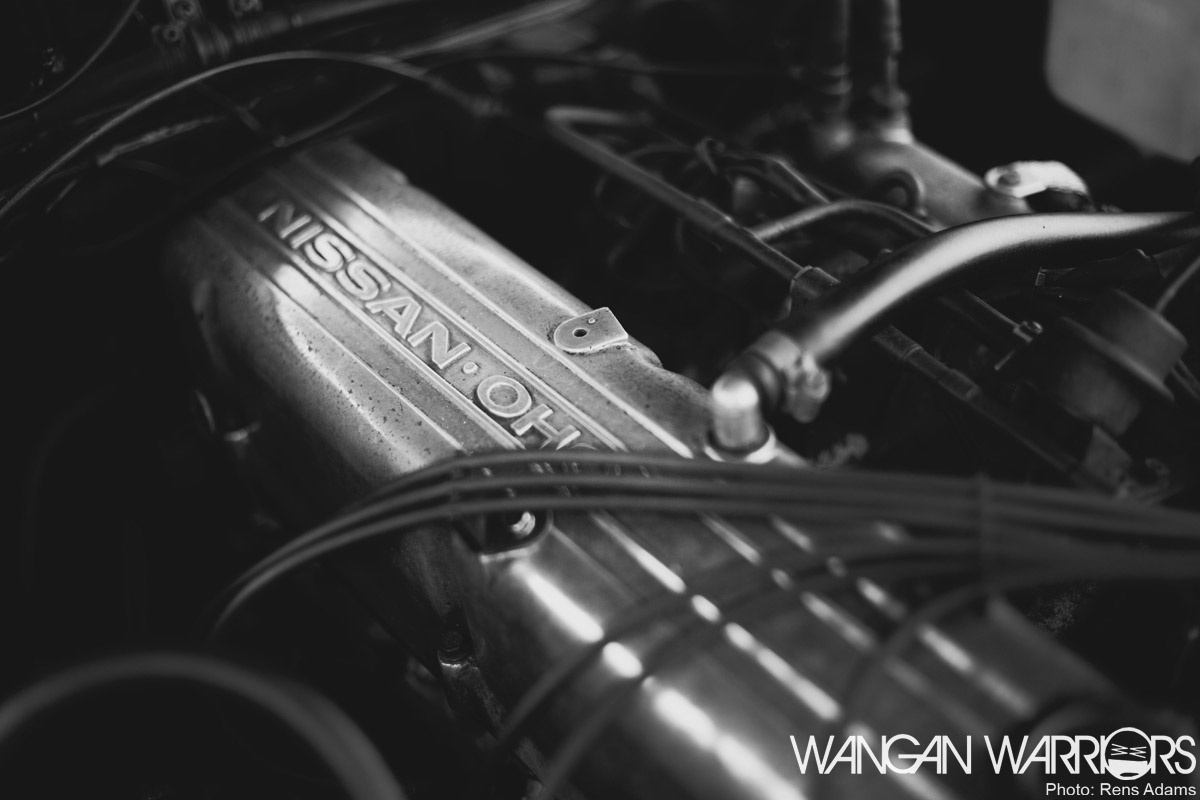 The sound it produces is more than pleasant to hear and it really belongs to a classic model like the Skyline C210. So here we are, slowly coming to the end of this feature and I’m feeling very pleased to have captured this car. Let me just tell you that this certainly isn’t the last time you’ll see it on Wangan Warriors. 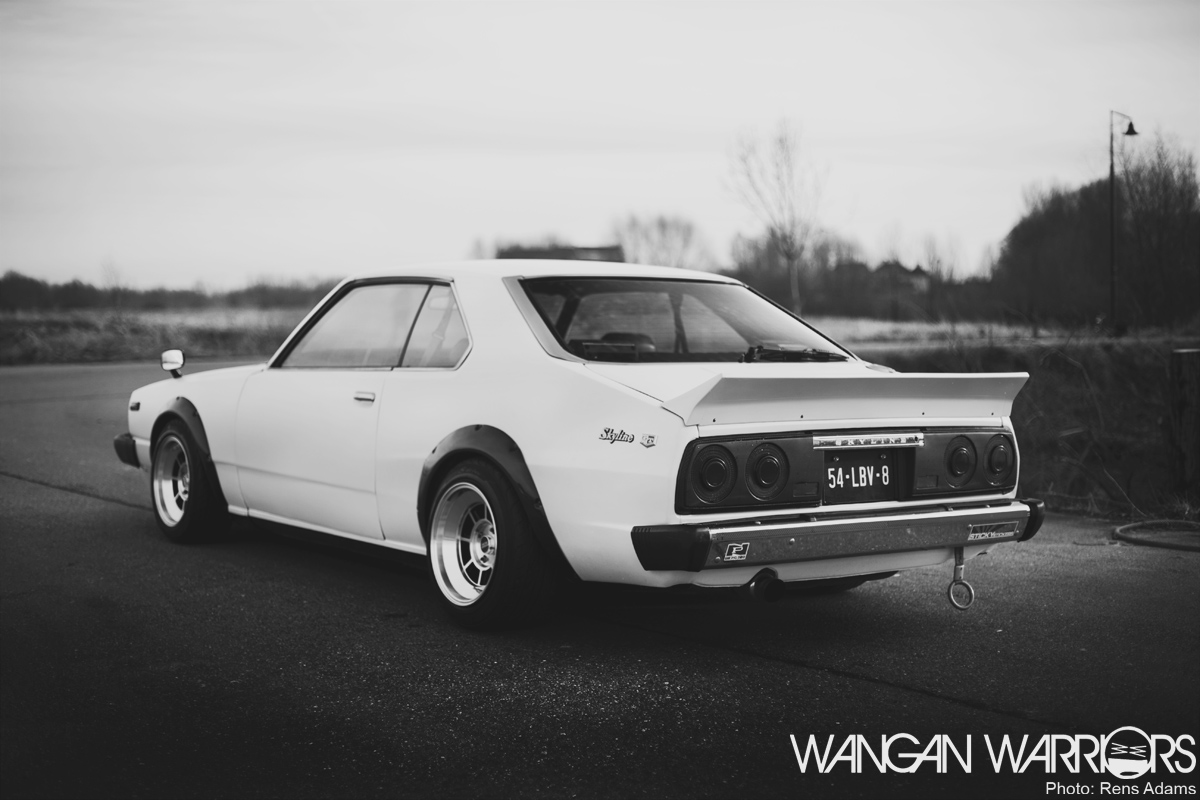 I would like to conclude this article with a big thank you to Carlo de Grundt for his time and kindness to show me around in his workplace and for taking me to a few photolocations in his hometown. I wish you all the best with your company and hopefully we’ll meet sometime soon. So what shall we feature next?