Aaaah yes! The eigthies. The Teenage mutant ninja turtles were created. The Dutch football team actually won something. I was born (1983). Miami Vice. The Berlin wall fell. Punkrock. The golden age of graffiti. Akira. Jan Lammers wins the 24H of LeMans. Back to the future. Skateboarding. U2. MTV still broadcasted actual music videos. The A-team. Walkmans were cool. GI Joe. Cindy Crawford was my first crush when I was five. Last, but certainly not least, my first car (an AW11 MR2) rolled out of the factory! Oh, and it was the decade of boxy, Japanese, four-door saloons. 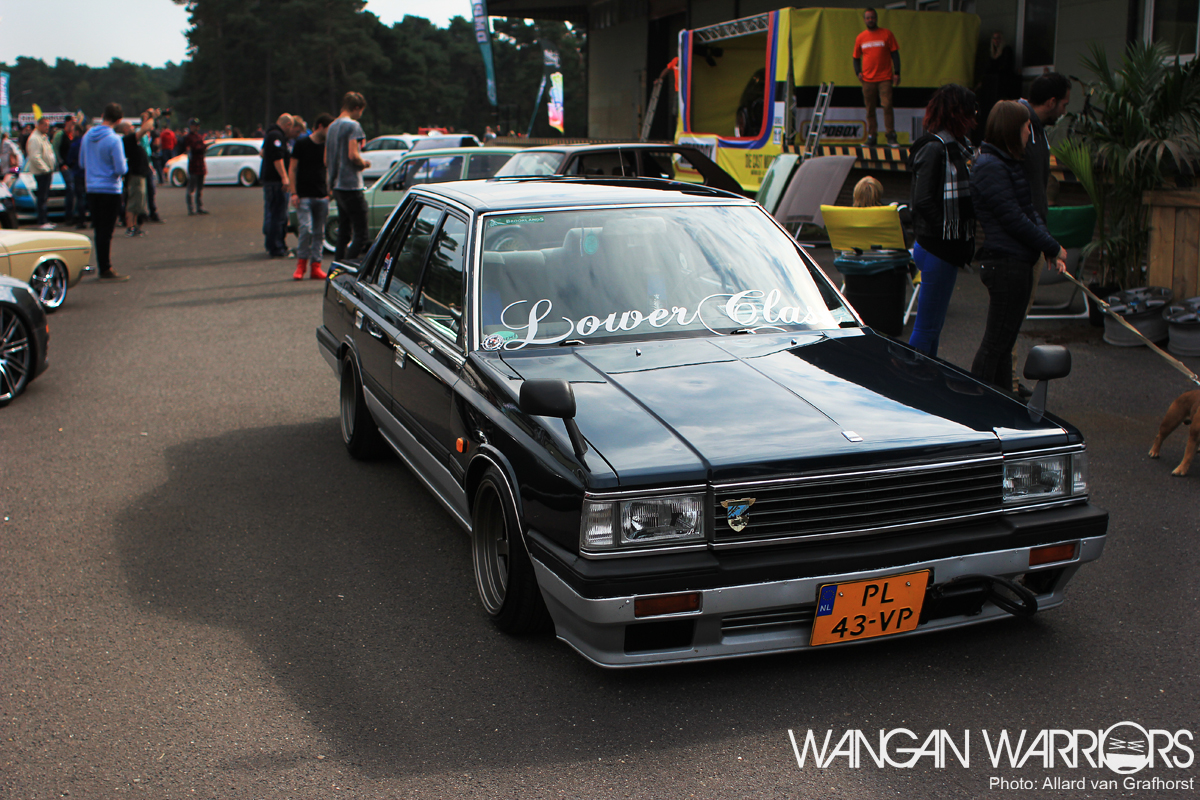 Like this fine example shown here. You might recognize this Nissan C32 Laurel from my DMPD 2K15 coverage earlier this year and to be honest, it was one of those rides that stole the show for me! It’s surrounded by a certain “zero f*cks given” vibe and I knew that I had to shoot a spotlight for our blog. 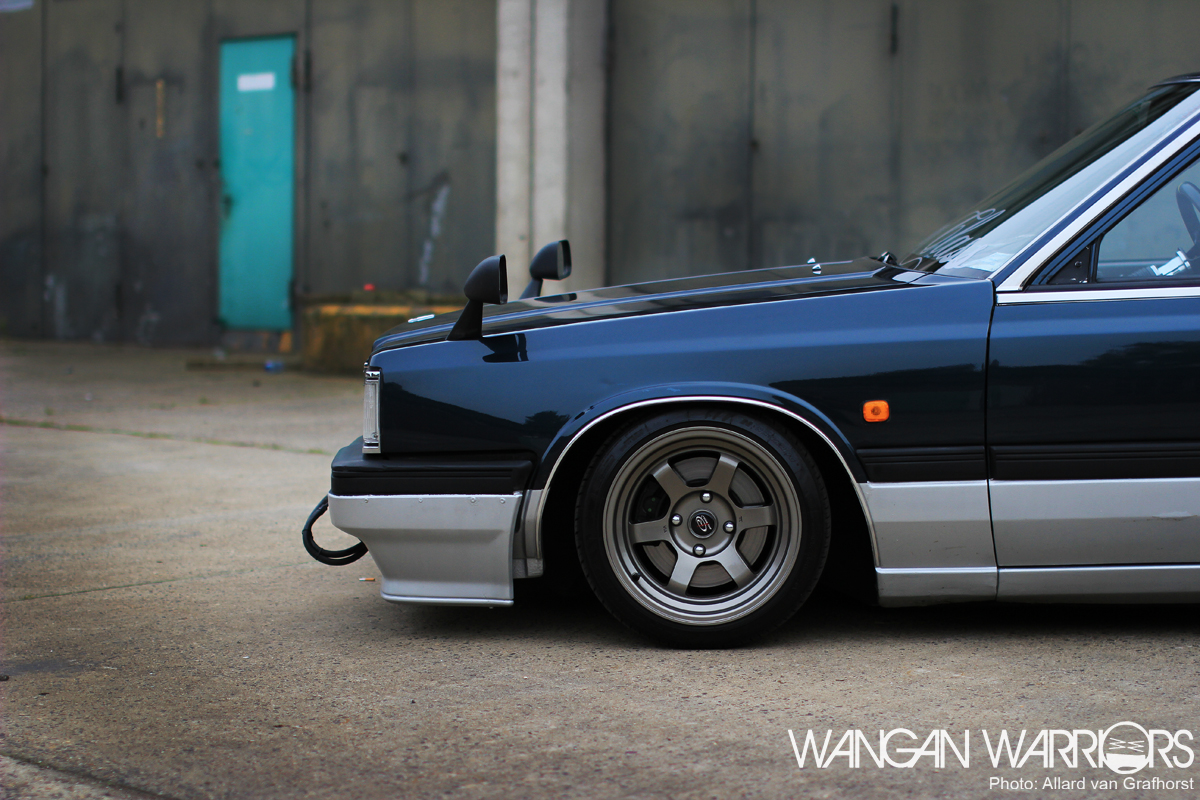 It helps that the owner, Daniël, is a DMPD regular, so getting the car all to myself wasn’t exactly challenging and the old army base made for a perfect location. 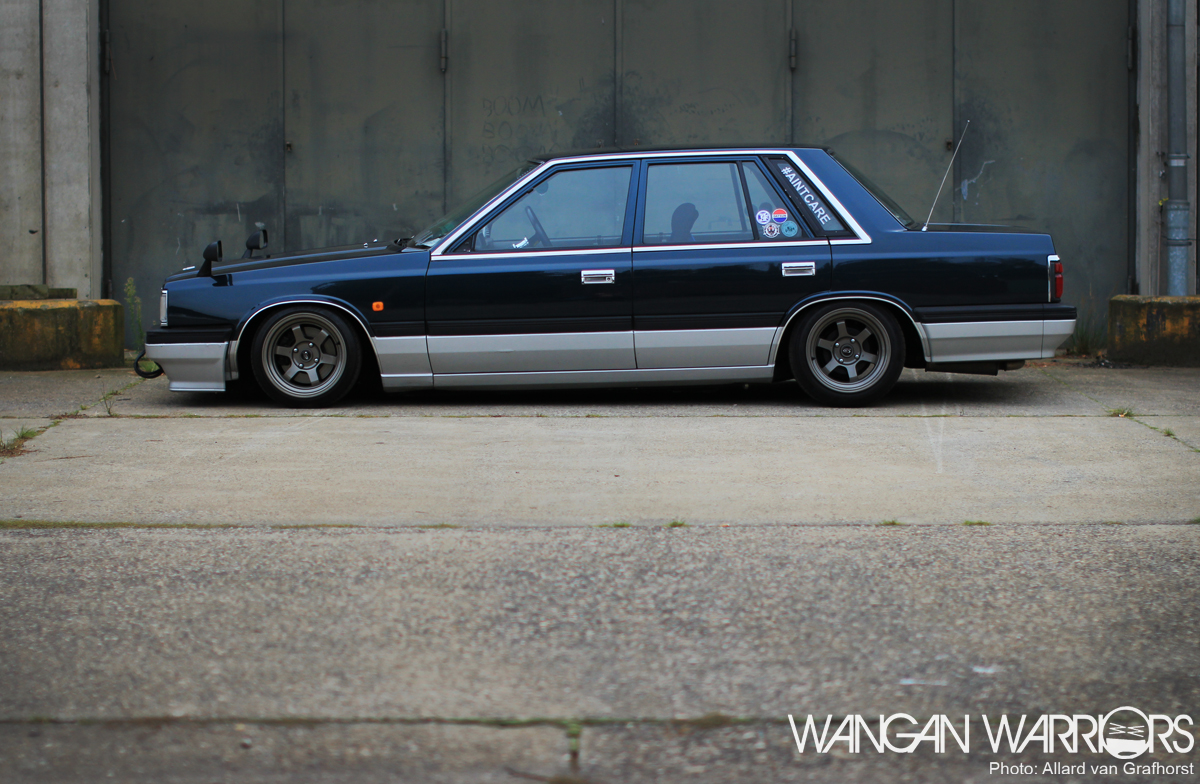 The first thing you notice is the perfect stance, achieved by AST coilovers which were originally meant to be fitted under an S13. Now, normally I consider myself a purist when it comes to wheels and I can already hear the comments about the Rota Grid V’s, but this car has been built as a daily drifter and Daniël didn’t feel the need to potentially trash a set of rare, expensive JDM wheels. I have to admit, can’t really blame him there! 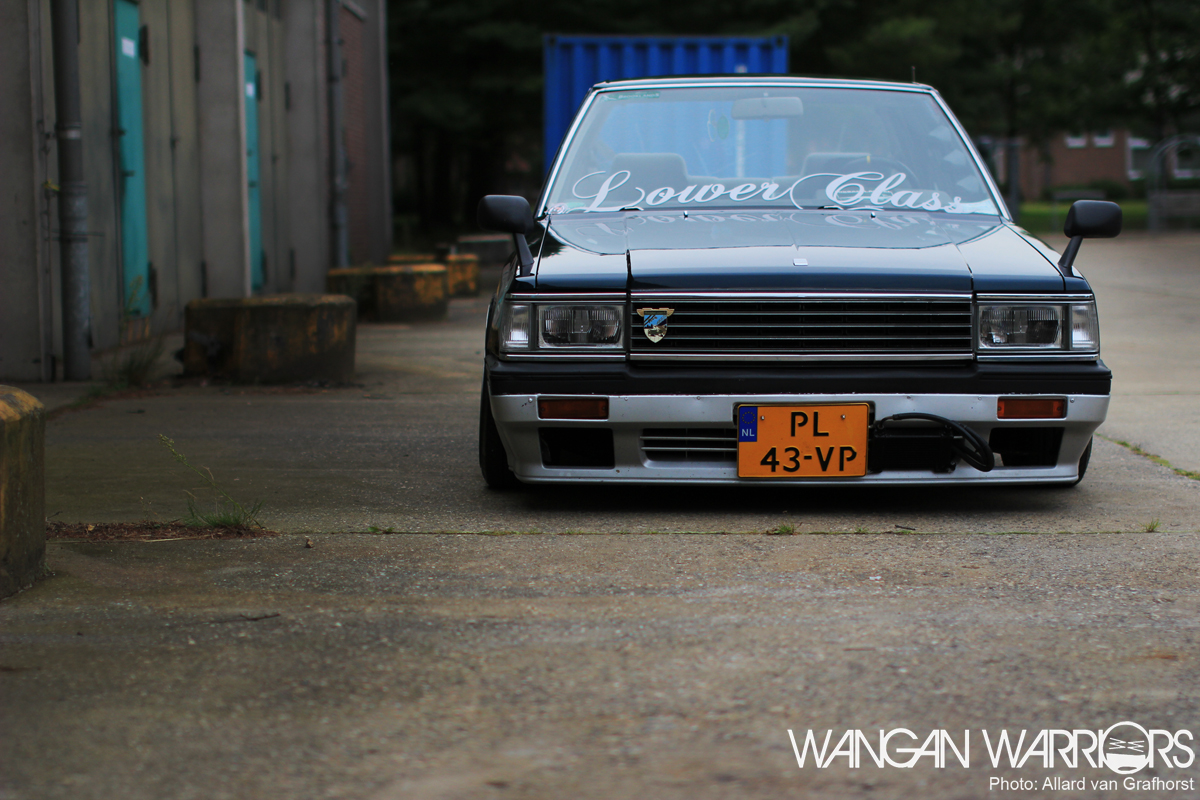 Daniël calls the car his “zero fucks given slider” so you would expect the car to be more beaten up than it is. On the other hand, this car has certain details that show the car has been built quite “period correct”, so to speak. 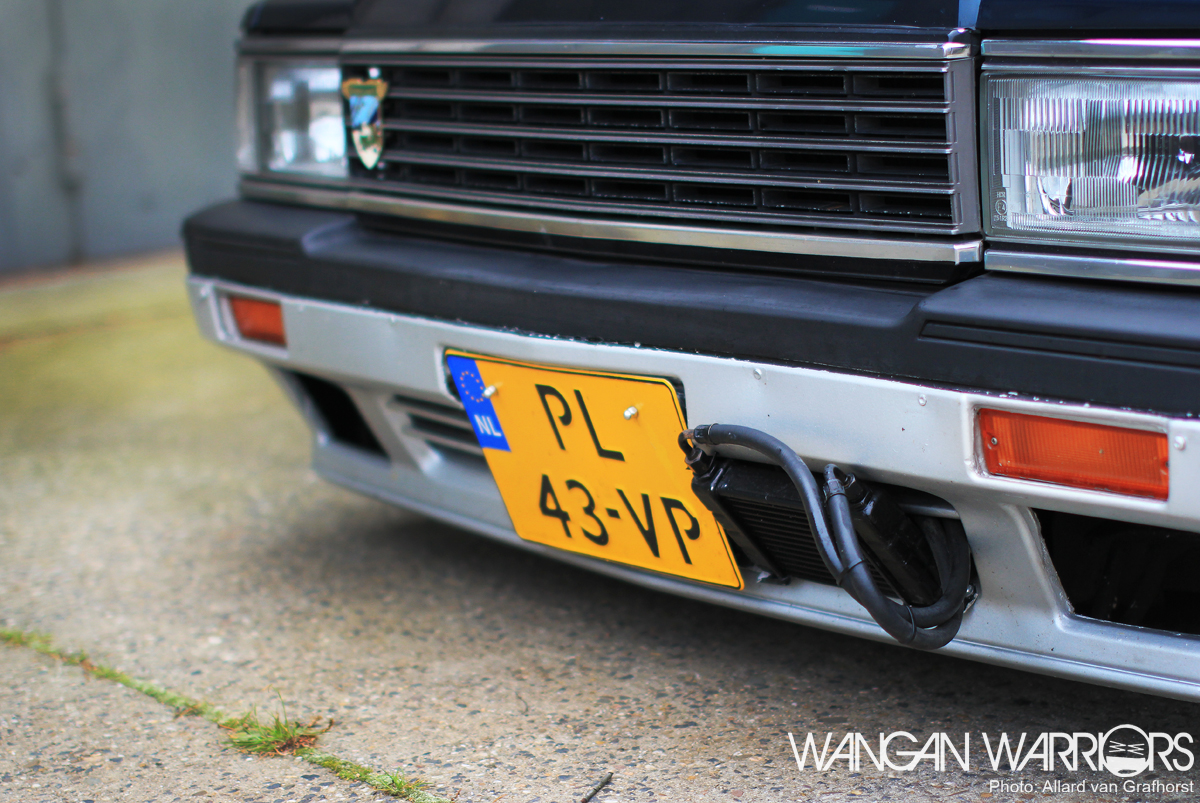 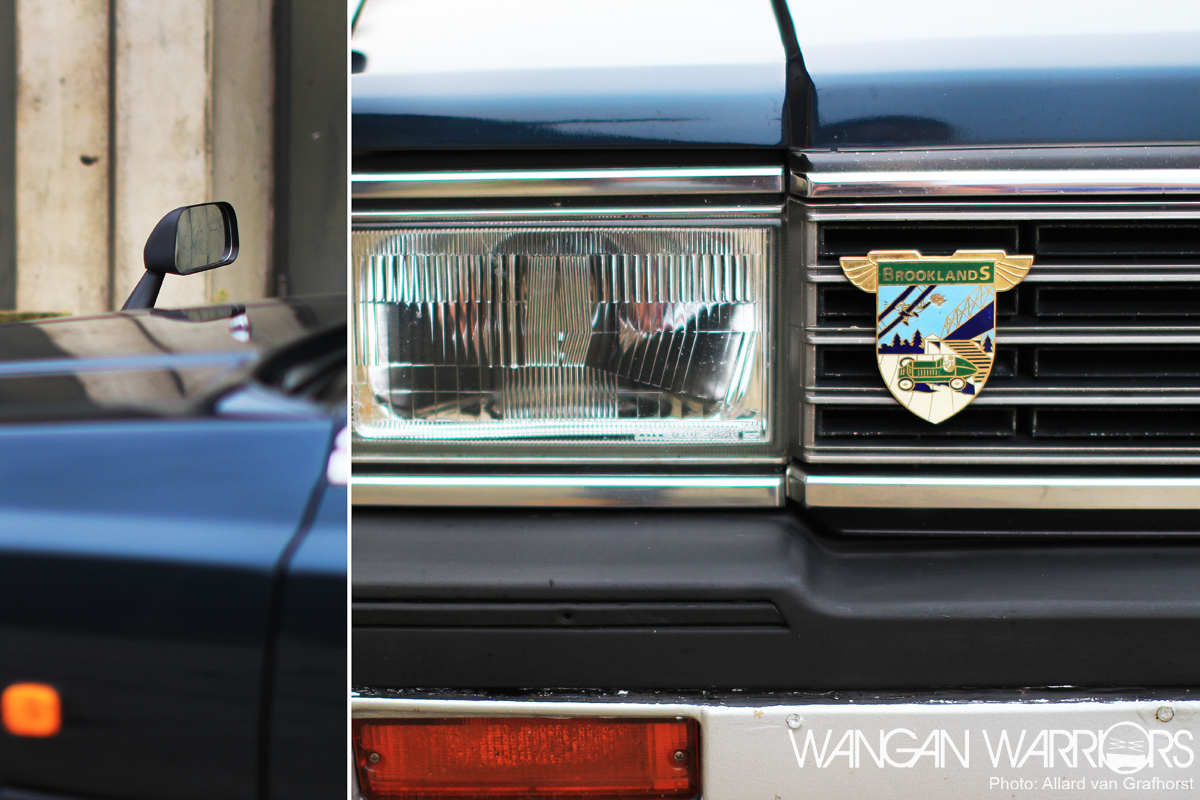 … and the JDM fender mirrors. I personally really like the Brooklands badge prominently placed on the front grill, which Daniël bought at the Brooklands museum. Details like this are a dead giveaway the car is secretly more than “just” a daily drifter. 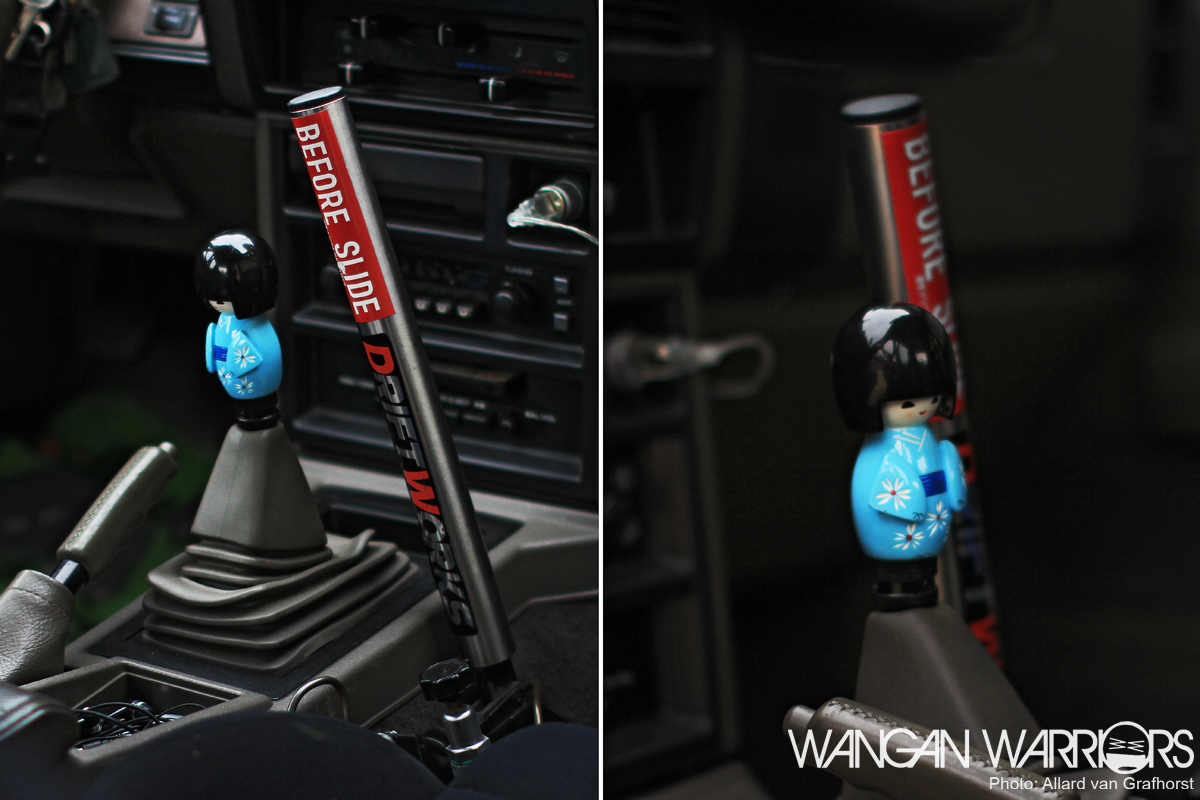 And yes, it has all the right stuff you need as a drifter. Hydraulic e-brake. Custom, colorful shift knob… 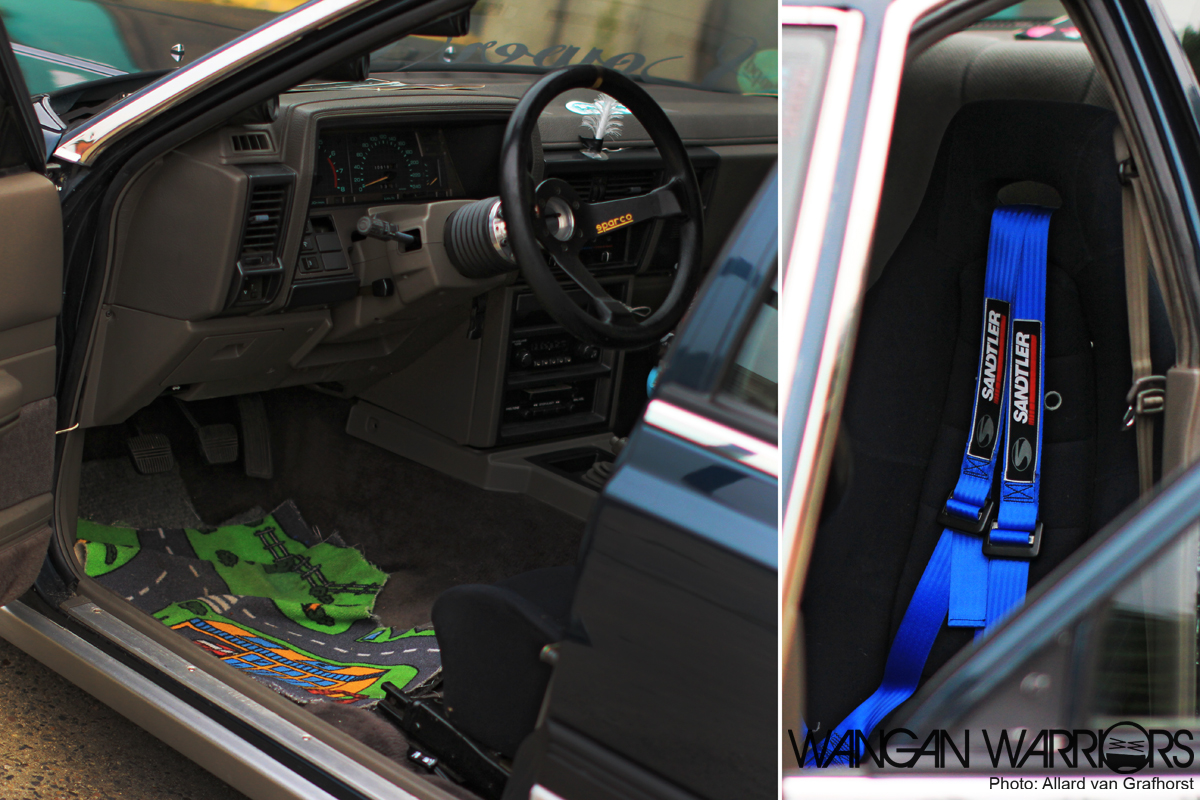 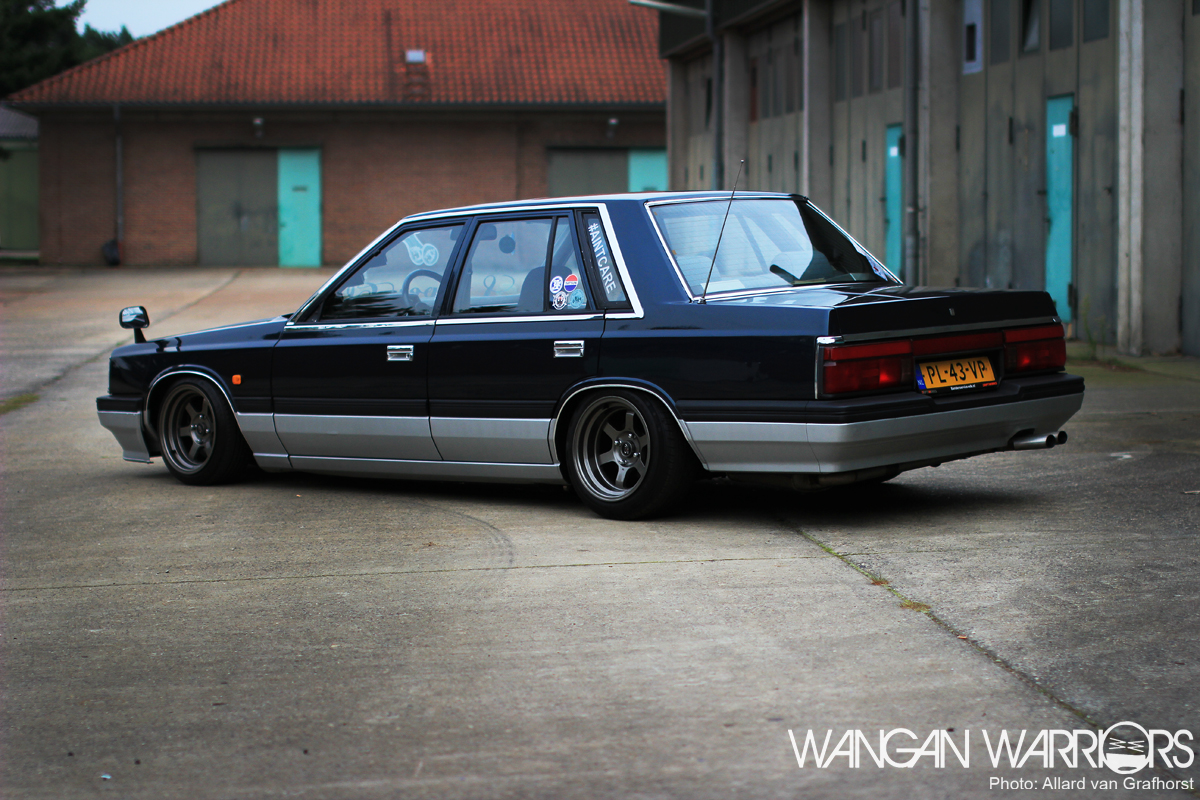 But Daniël realized that cars like this are really becoming rare in in this state, so this winter the car will retire as his drift barge. 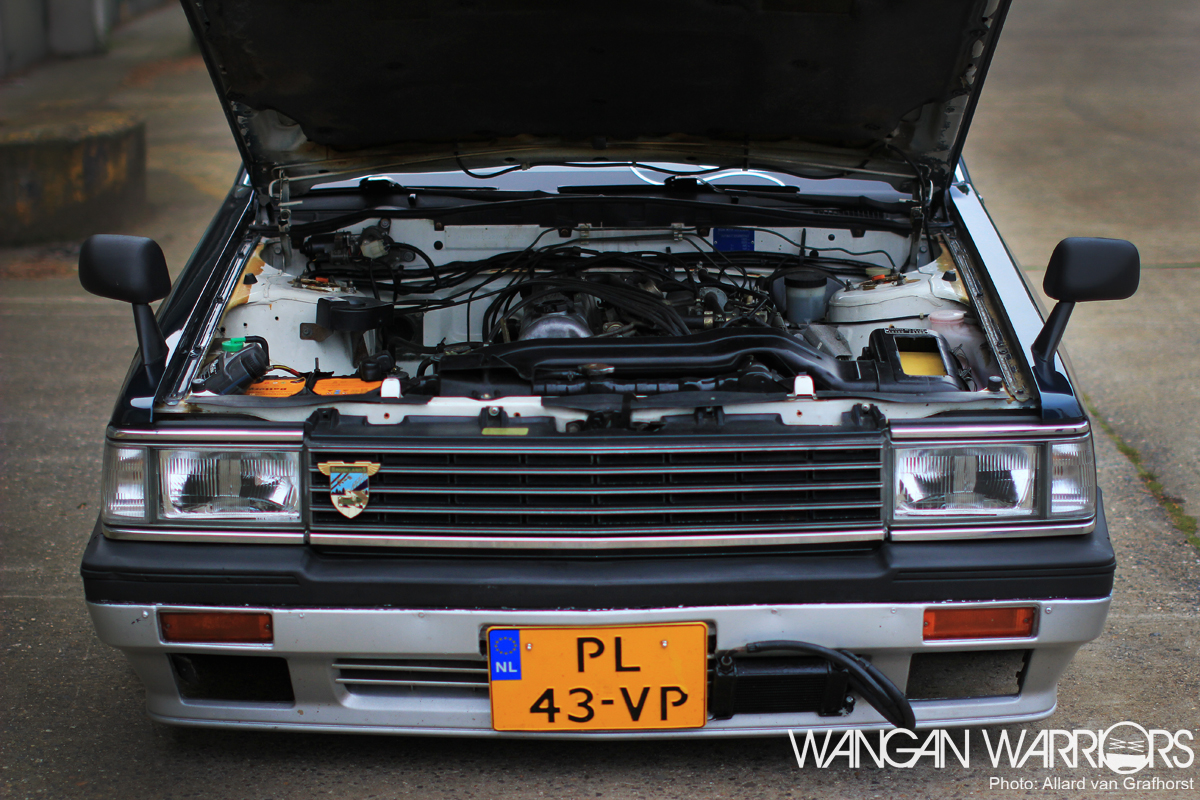 Even the original L24e looks like it came out of the factory yesterday, so it’s a decision I can only appreciate. The car will not retire completely though, it’ll still receive some love and care and maybe a V8. Yes, you’ve read that correctly. 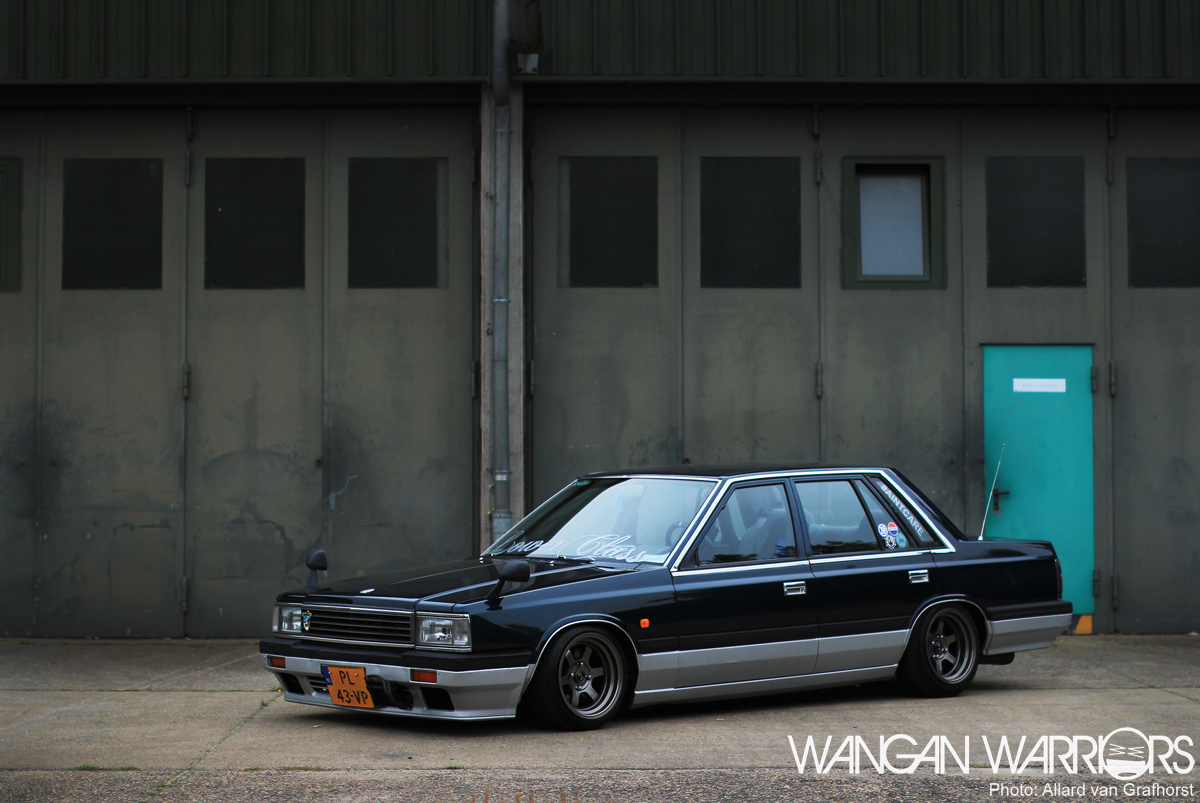 So whatever the plans are with this C32, there’s a big chance this isn’t the last time you see one of Daniëls cars on our blog, since he’s already bought a second Laurel to turn into a “period correct, aintcare, zero fucks given drifter“. 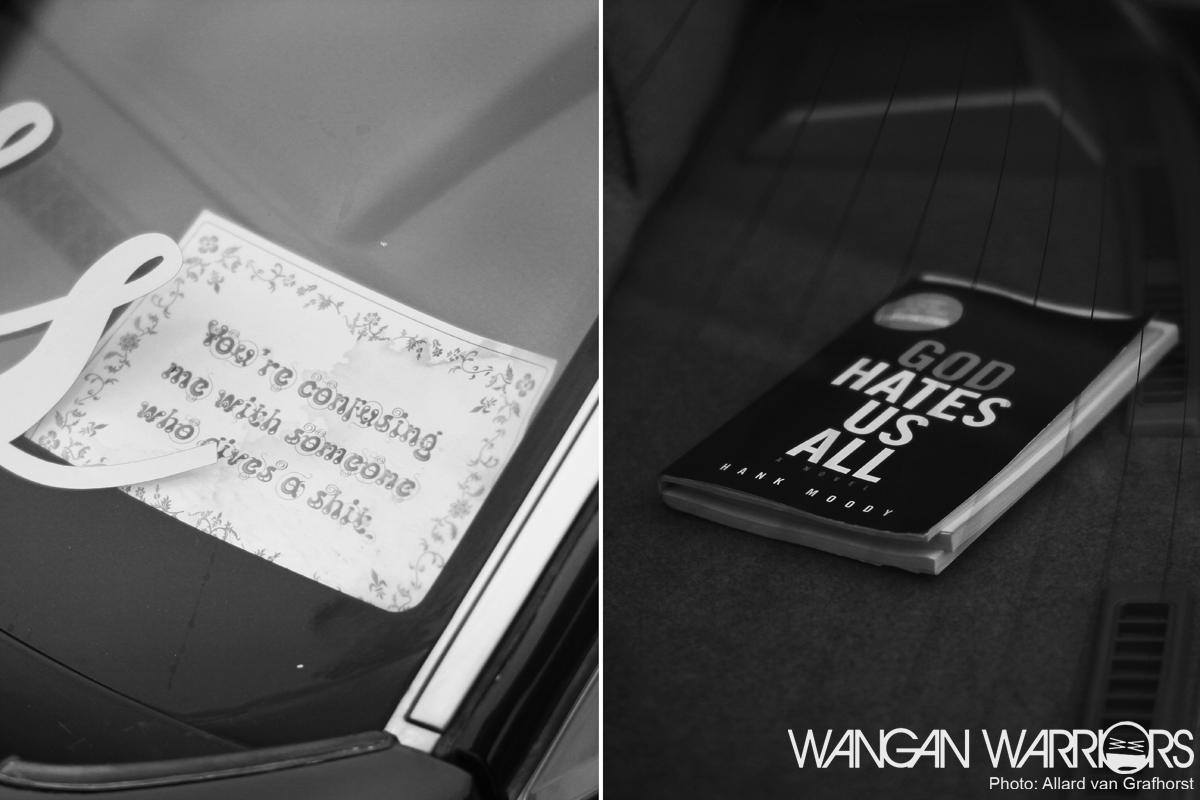 I, for one, can’t wait too see what he comes up with and spending some time with this boxy, tarmac scraping, zero fucks given, daily drifter reminded me of two things… 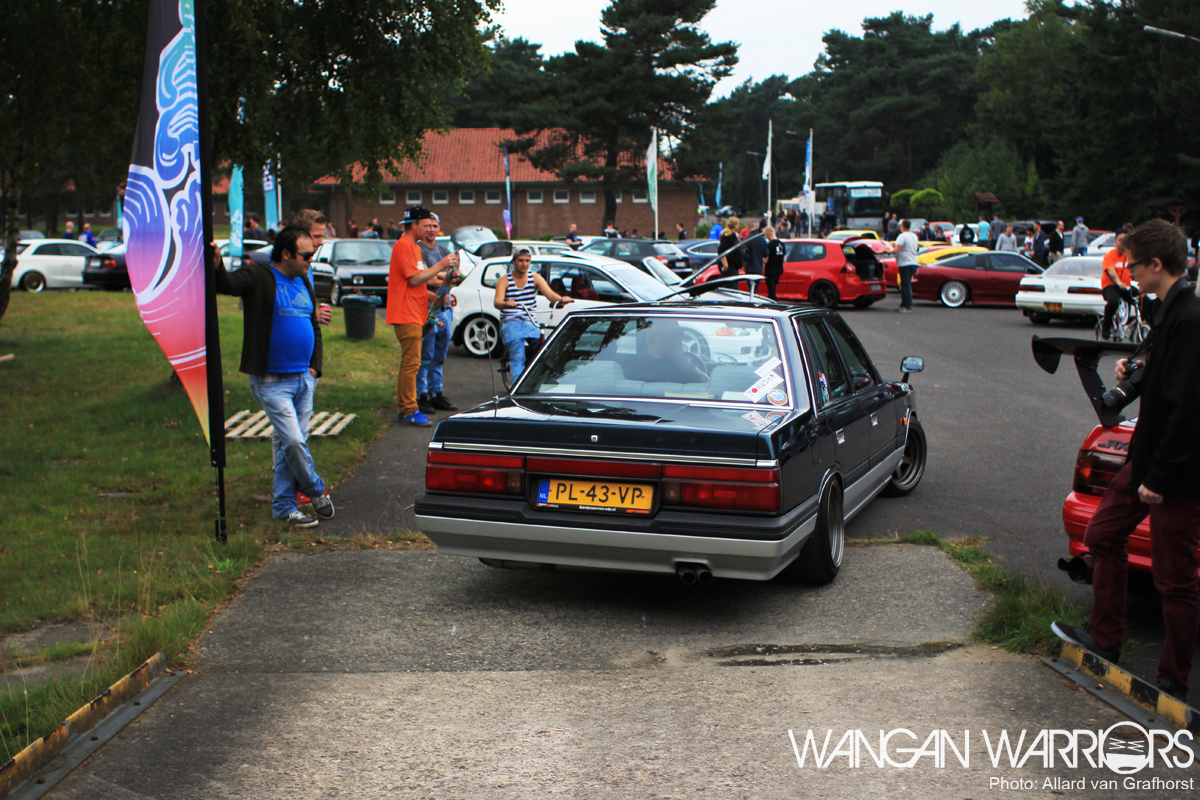 1) I need a Japanese four door barge in my life.
2) I love the eighties!

To do – engine swap (V8) or carbs or throttle bodies.
Respray