It always surprises me when a group of people is capable to achieve something they set out to achieve. As the preparations of #WNGN are in full swing I’m starting to realize how far we came with something what once was a little car club of only a hand full of people. Of course we have a great group of supporters surrounding our club and the entire scene backing us up at all times. Knowing this, we were confident to host a big event. But let me tell you, it’s getting bigger than we’ve ever dreamed of! Last week we organised a litte promotion meeting to do some photoshoots and filming to promote the event. This was a great succes and we had a lot of fun so what kind of blogger would I be not to share those experiences with you nice folks. 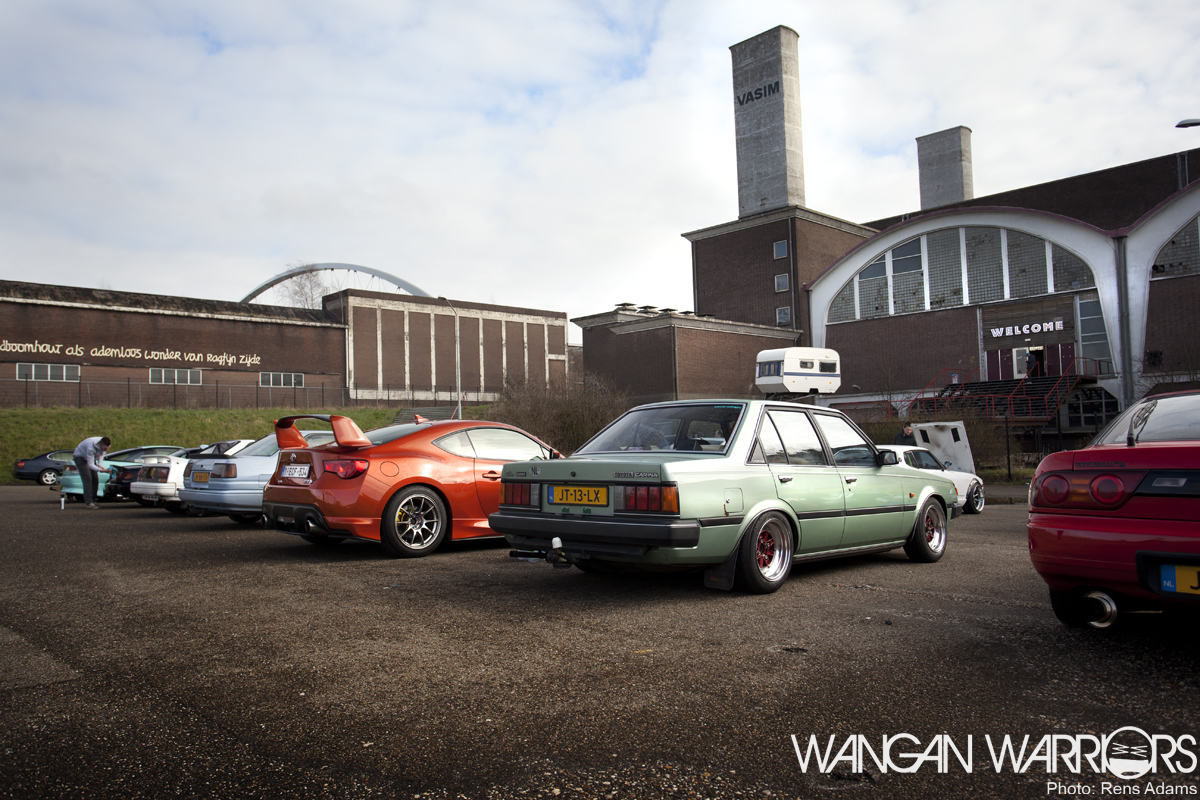 After we shot some video at the #WNGN Hotel, we arrived at the Vasim where most people already were cleaning their cars for the planned photo- and videoshoots. Eventhough we knew all the people that showed up, it’s always nice to see how they’re doing and what their latest mods are on their projects. The day was basically meant to chill, have a chat and shoot some stuff, so no major tasks. 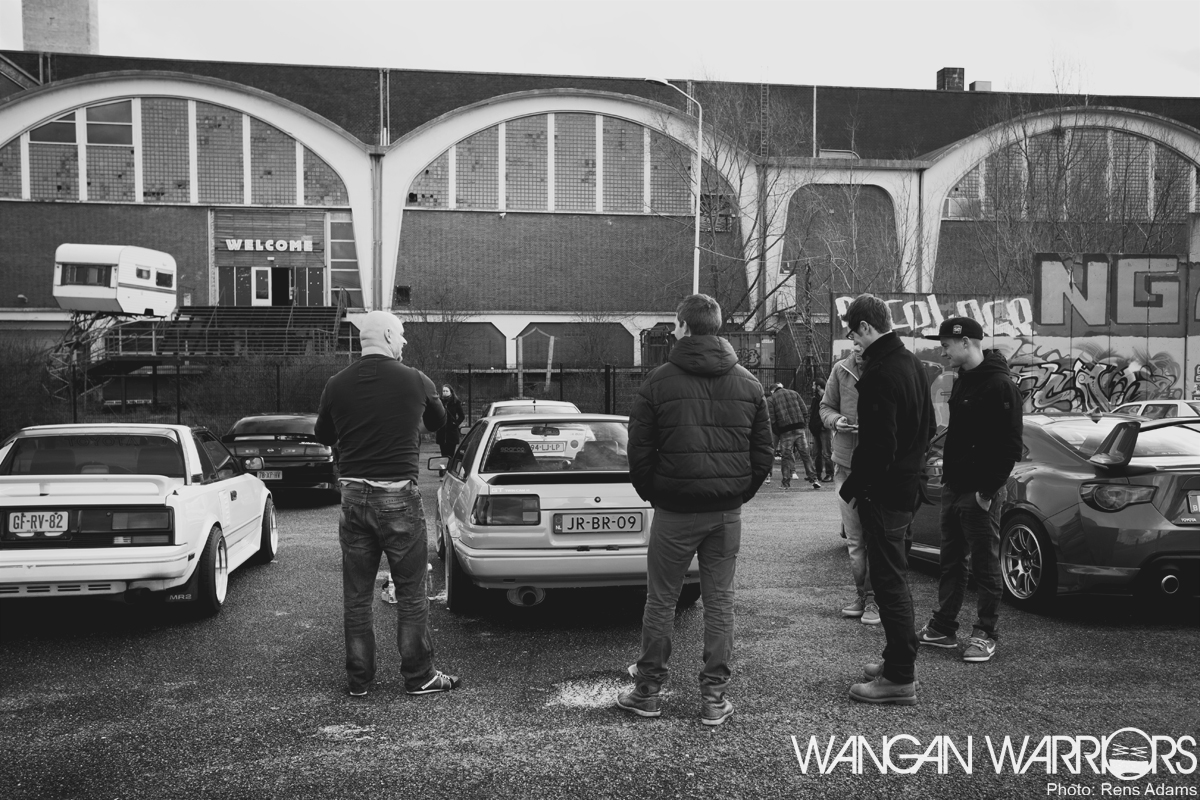 As I said before in my 2K13 recap post, I seriously love seeing other people having a laugh and sharing their stories with eachother. It wasn’t hard to notice that everybody really got along very well during the promo day and that’s exactly what we want achieve with our events. I can’t really remember any serious conflicts during any of our meets nor do I expect any in the future. There always seems to be such a natural amount of joy and respect among the people. 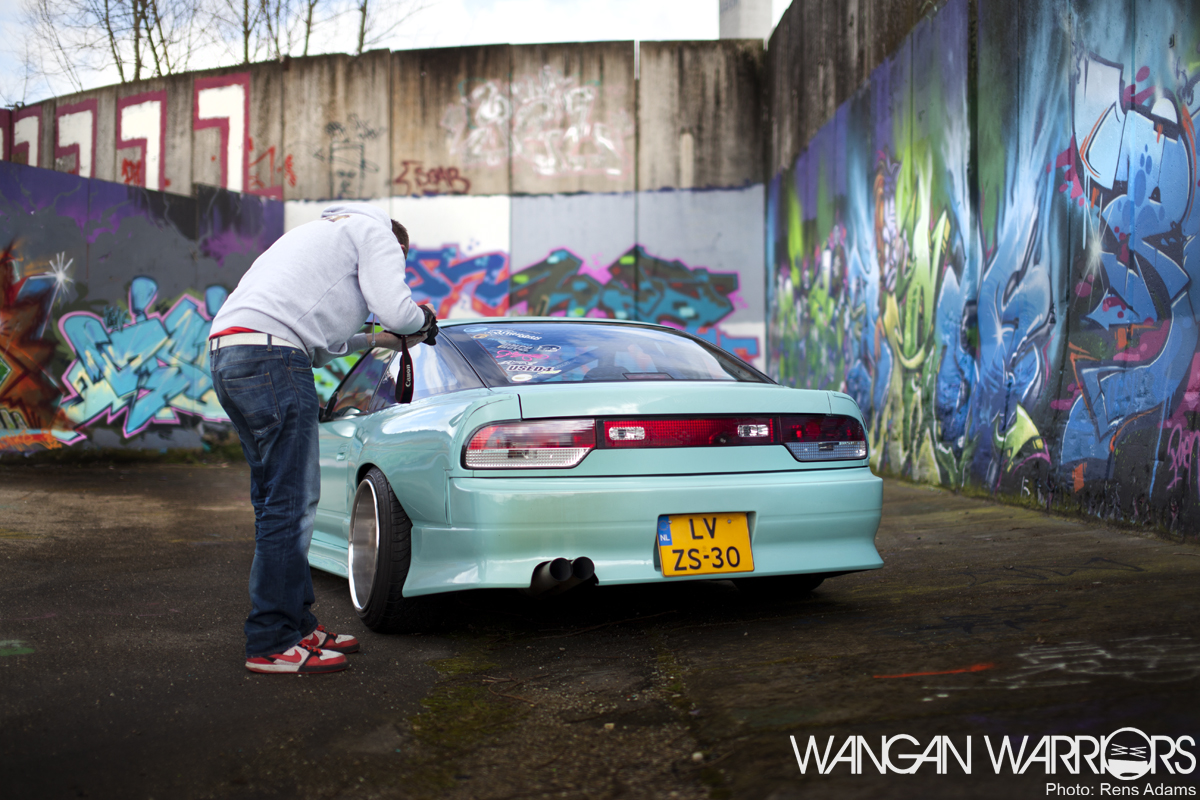 Of course when there is videography to be done, it’s done by Mathieu van den Oever of Curb Images and what a masterpiece did our good friend produce this time. Make sure you don’t miss out on his videocoverage because this gives you a nice summary of what we have to offer on April 27th in Nijmegen. 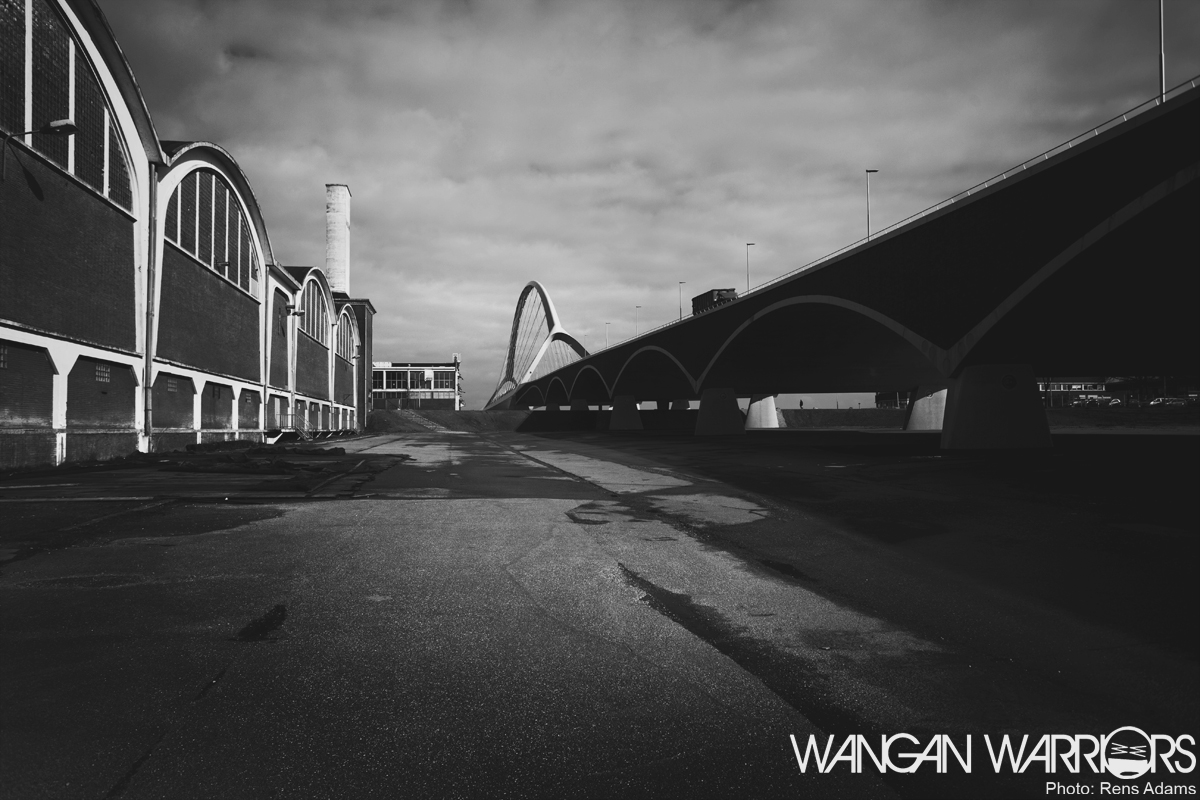 I did another lap around the Vasim facility and captured a few shots of the gigantic outdoor area behind the building underneath the bridge. We had to keep this from you for a while because it wasn’t certain we would be able to use this part of the premises, but we’re happy to tell you we can use this entire area for the event. It’s safe to say all Japanese cars will be able to get a spot in the outdoor area of the event. 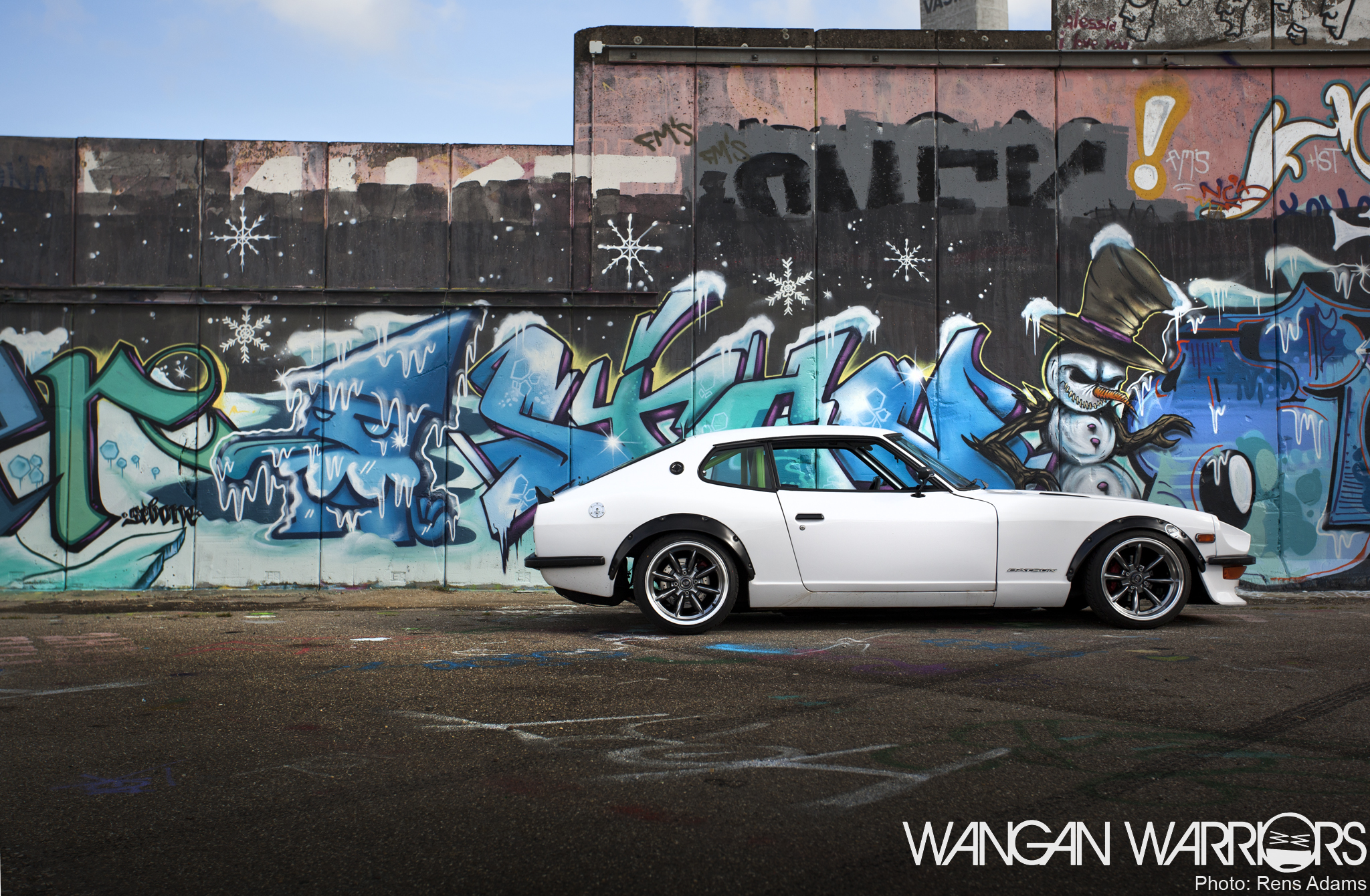 The front side of the building has a completely different atmosphere. It has that raw urban feel with loads of artistic graffiti to admire and with a bunch of cars parked in front of it, I think we’re mixing up urban flavours pretty well, aren’t we? It sure is a nice location to do photoshoots though! 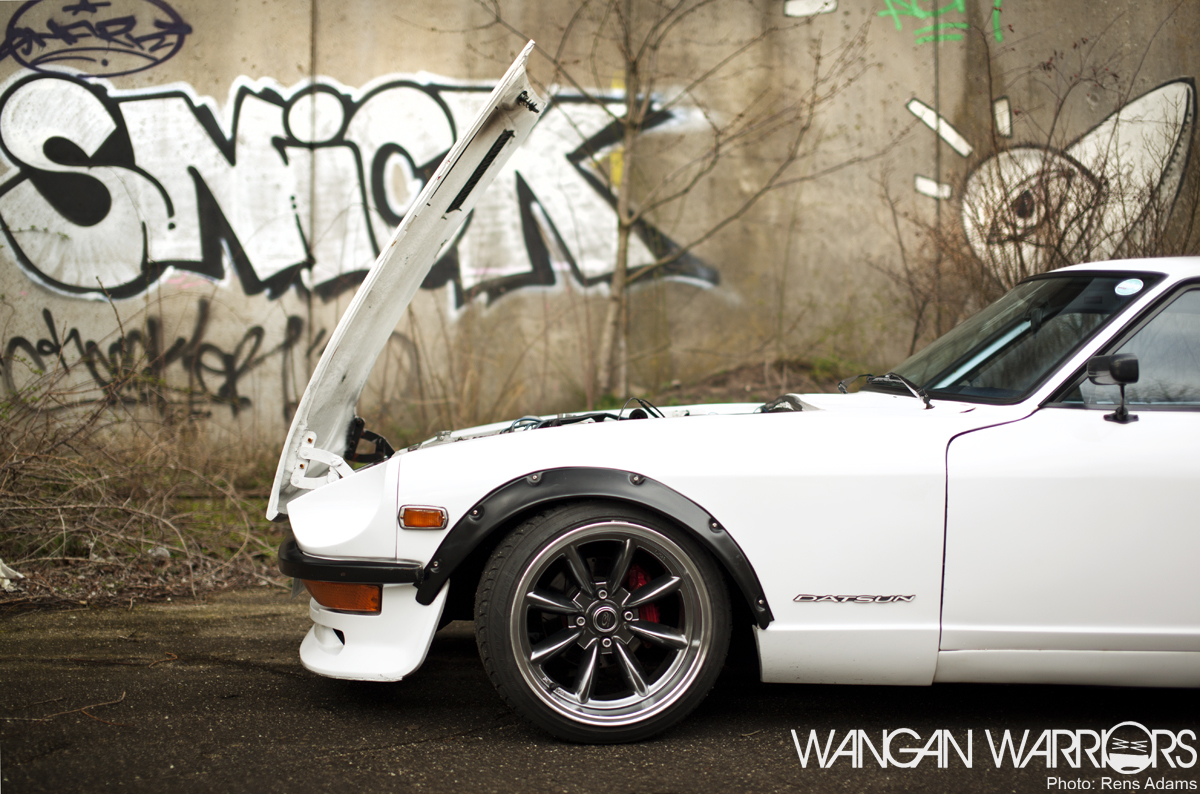 If you keep an eye on our blog in the coming weeks, you’ll find a photoshoot of Robin Sluiter’s Fairlady Z. Robin is one of those clubfriends who’s always into a nice afternoon with cars and firends and he even continued working on his gearbox problems to make it to the promo meet. Of course you’ll be able to see this classic at #WNGN! 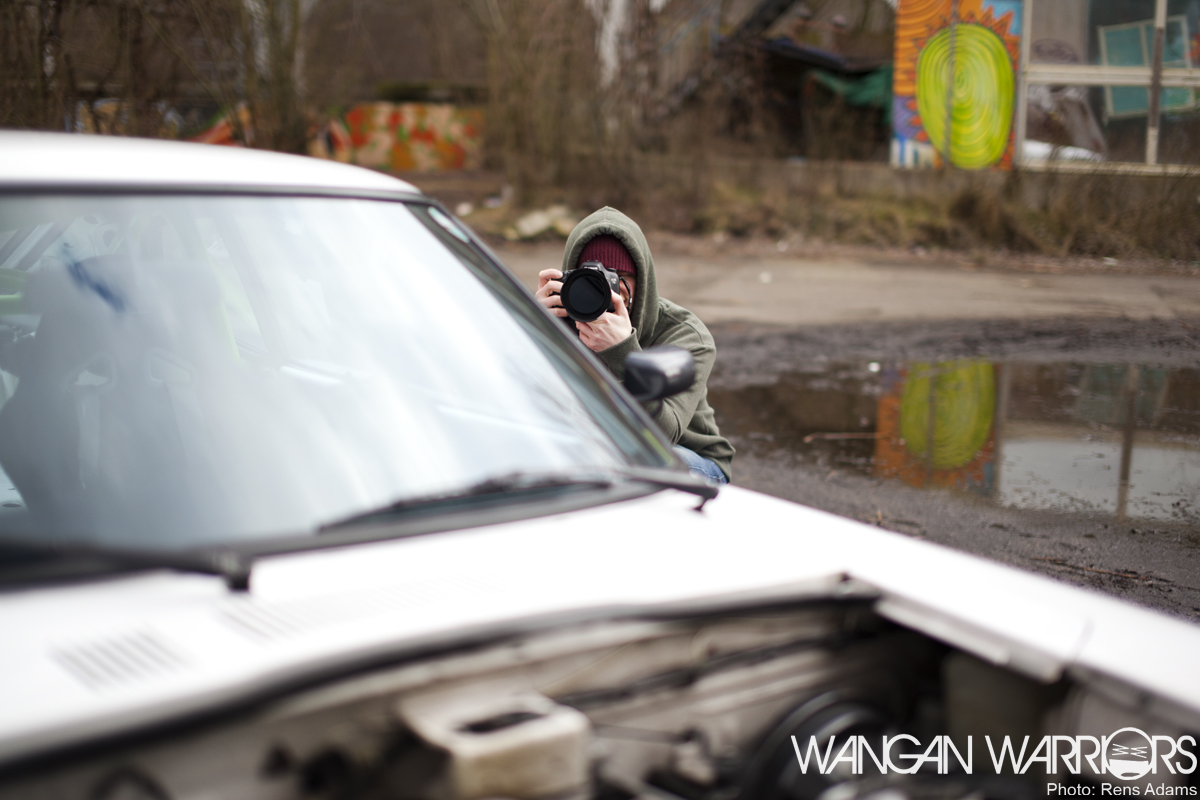 And if you’re checking out the blog on a regular basis you’ll first find Maurice’s part of the promo day coverage. He will write a nice mashup of several small car features, so he’ll give you a closer look at some of the cars present. 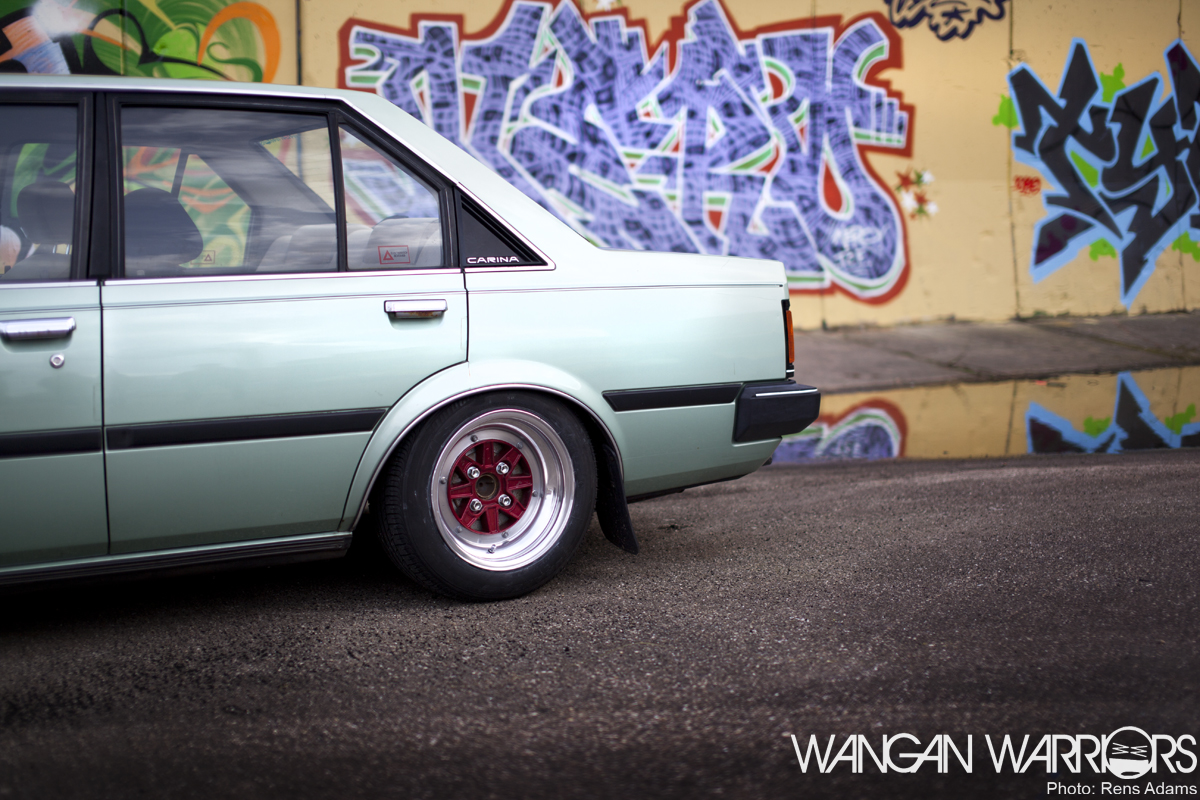 Our clubmember Kay bought a car that fits his 14″ SSR’s. Yes you’re reading it right, he wanted a cheap classic car, but his wheels needed to fit under it. His choice fell on the ’83 TA60 Carina and with these wheels and lowness it sure as hell looks like a proper classic, instead of a poor mans Cressida. 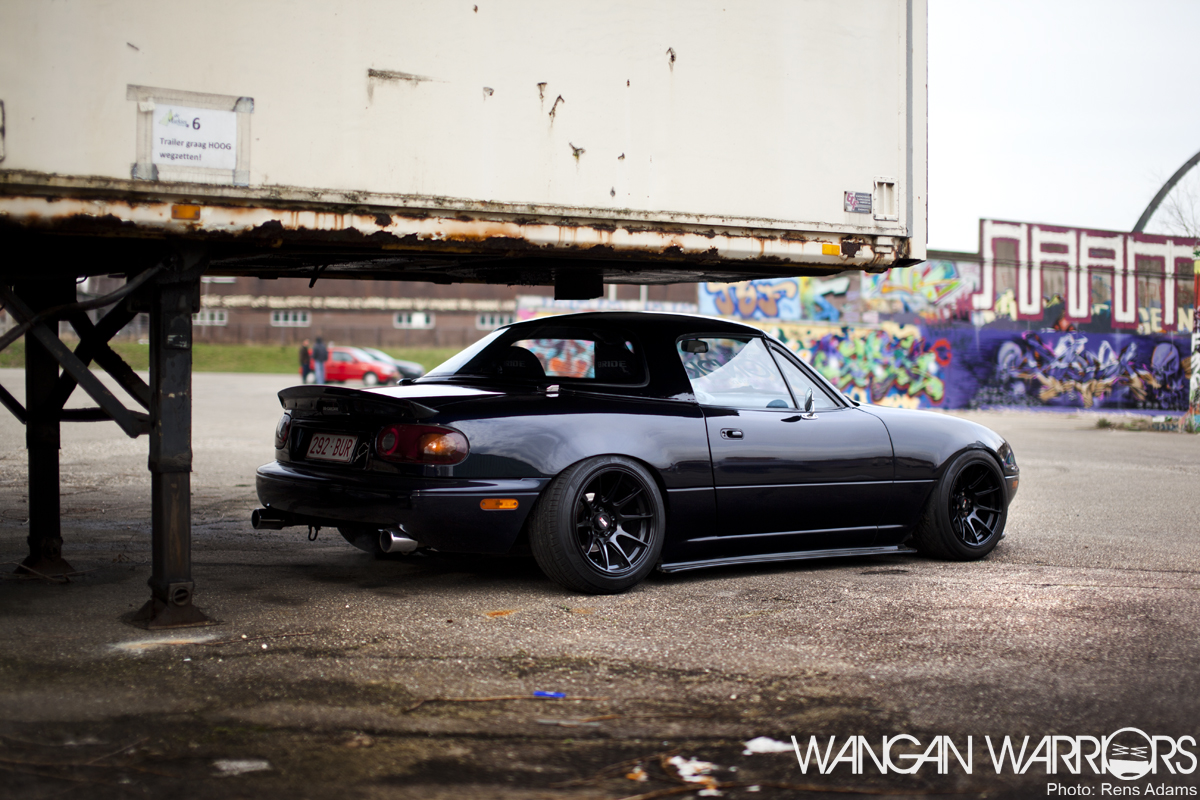 Never took a shot like this and by that I mean a low Miata under a trailer. The Vasim has a few of those parked in front of the building and it was fun to see if the lowest cars could park under them. Of course Dylan’s Mazda in specific was the car to try this with and it still had quite a bit of room left. 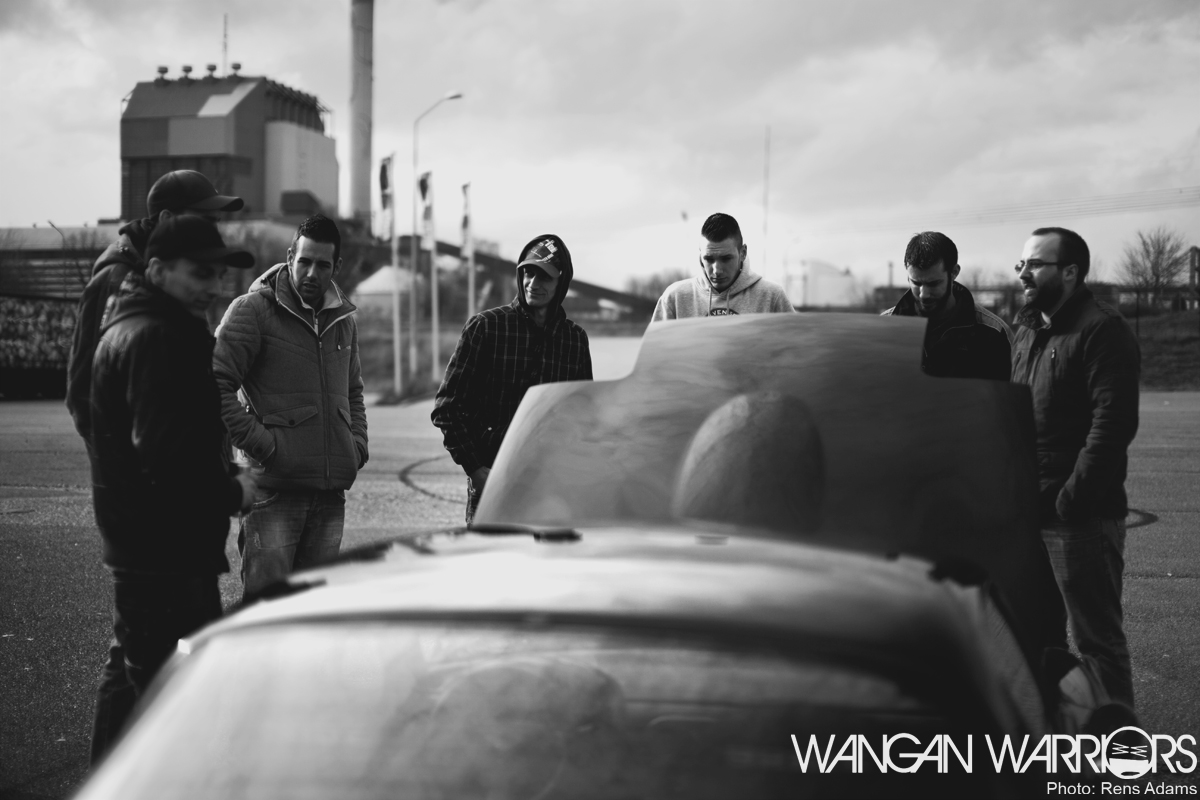 I noticed several people taking an interest in the turbo setup of Dylan’s car and again it showed there is loads of respect no matter what kind of engine swap you have, how big your turbo is or how much money you’ve spent on your project. It just matters that you’re there, even if it’s with your car on a trailer. 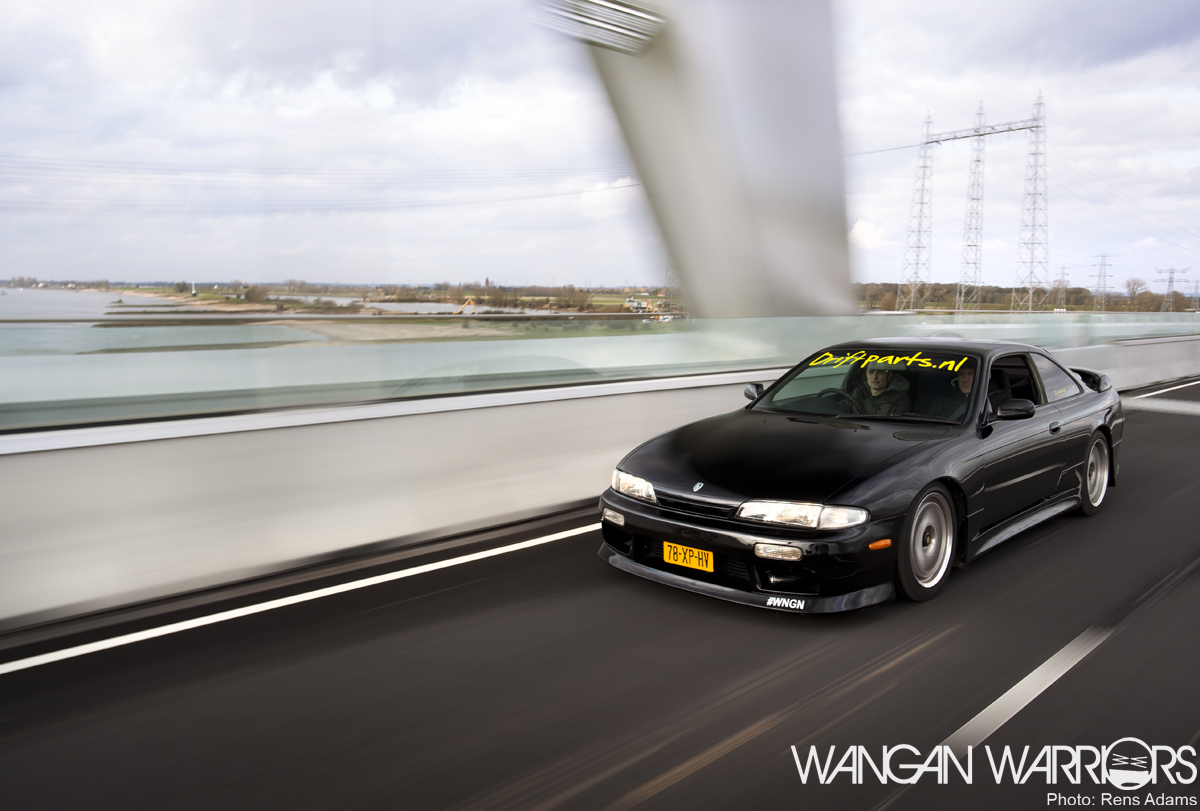 Edwin Swarts and Tim Lust from Drift Parts made a two hour trip to Nijmegen with the RB26DETT powered S14 on a trailer. Driving such distance for a couple of photos and videos is real dedication if you ask me. I visited Driftparts a while ago so you can expect a little article of that shopvisit as well somewhere in the next weeks. 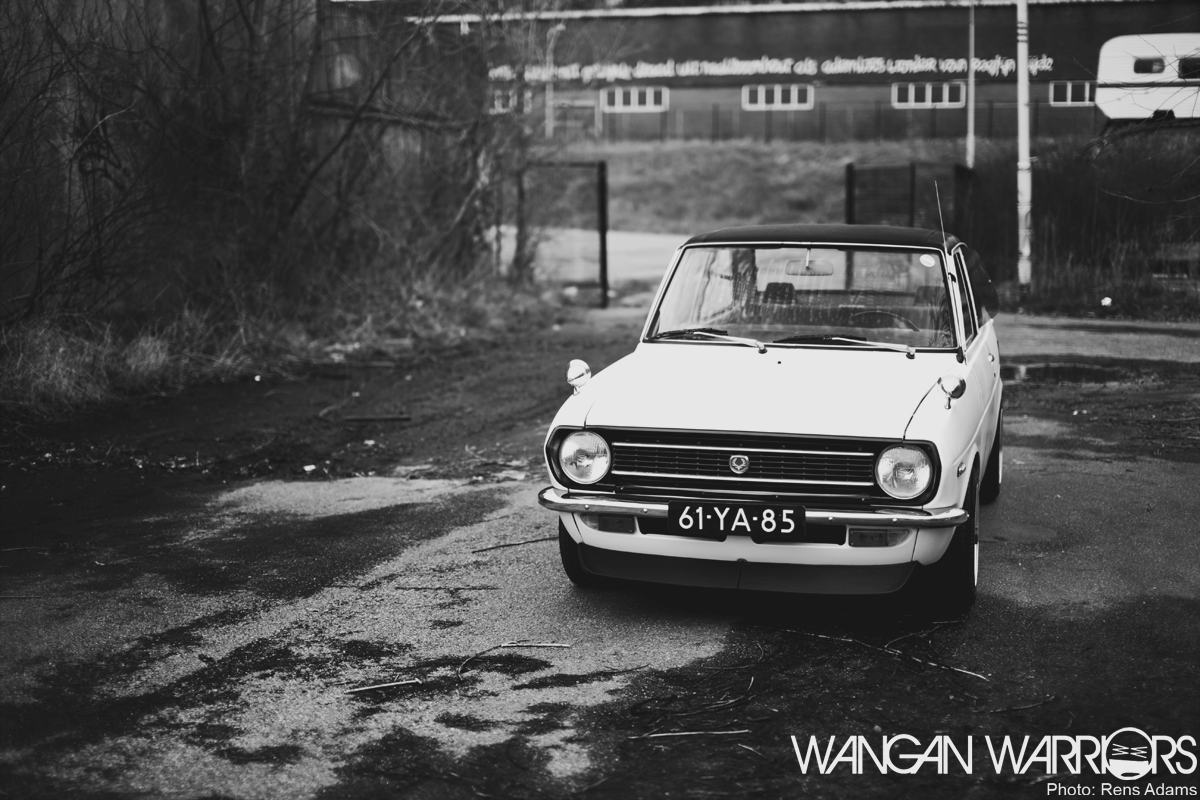 As we returned to the Vasim from several rollingshot trips on the bridge, I continued capturing some static shots of the cars present. Michael Adams’ Toyota 1000 is something else too, and because we wanted to mix things up a little bit with classic and new school, we were happy to see him at the Vasim. 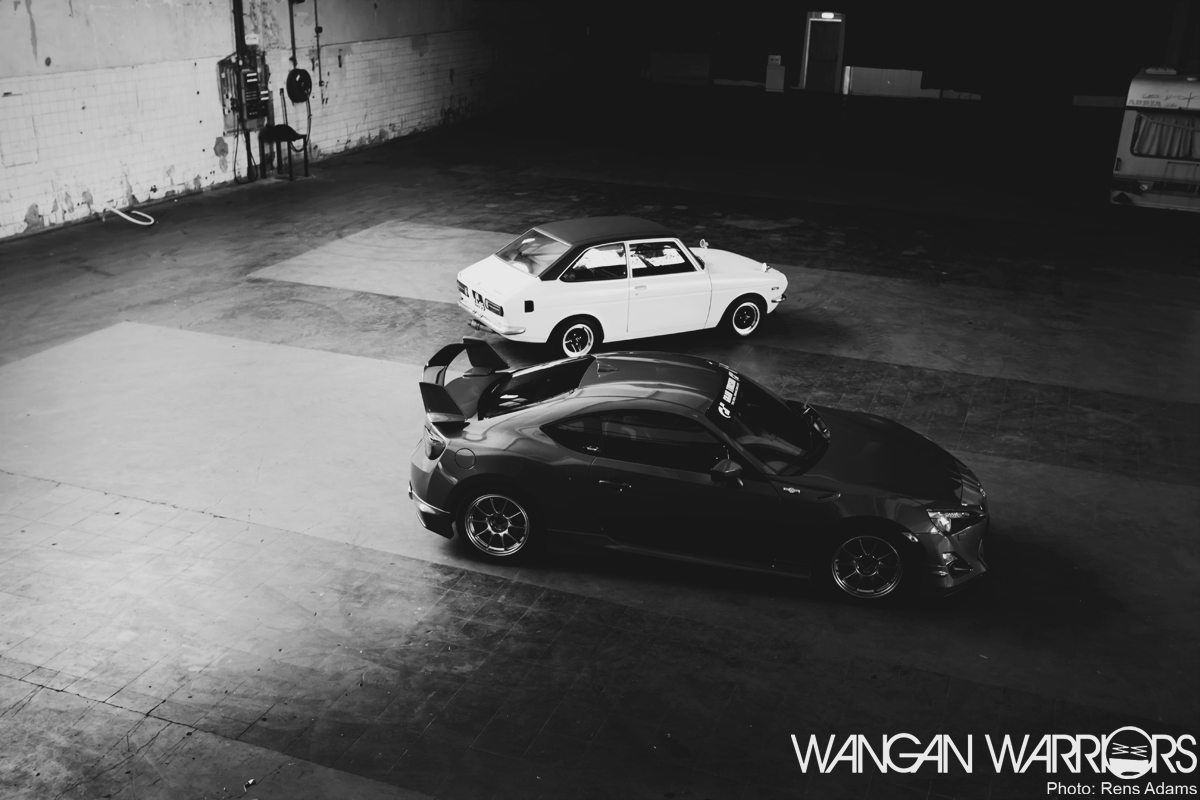 To show that contrast we parked the KP30 next to Gunther Lamberts’ GT86 in the indoor area and did a little photoshoot. I’m really looking forward to what the event will bring, and if we’re able to achieve our goal of bringing all styles and types of Japanese cars together. 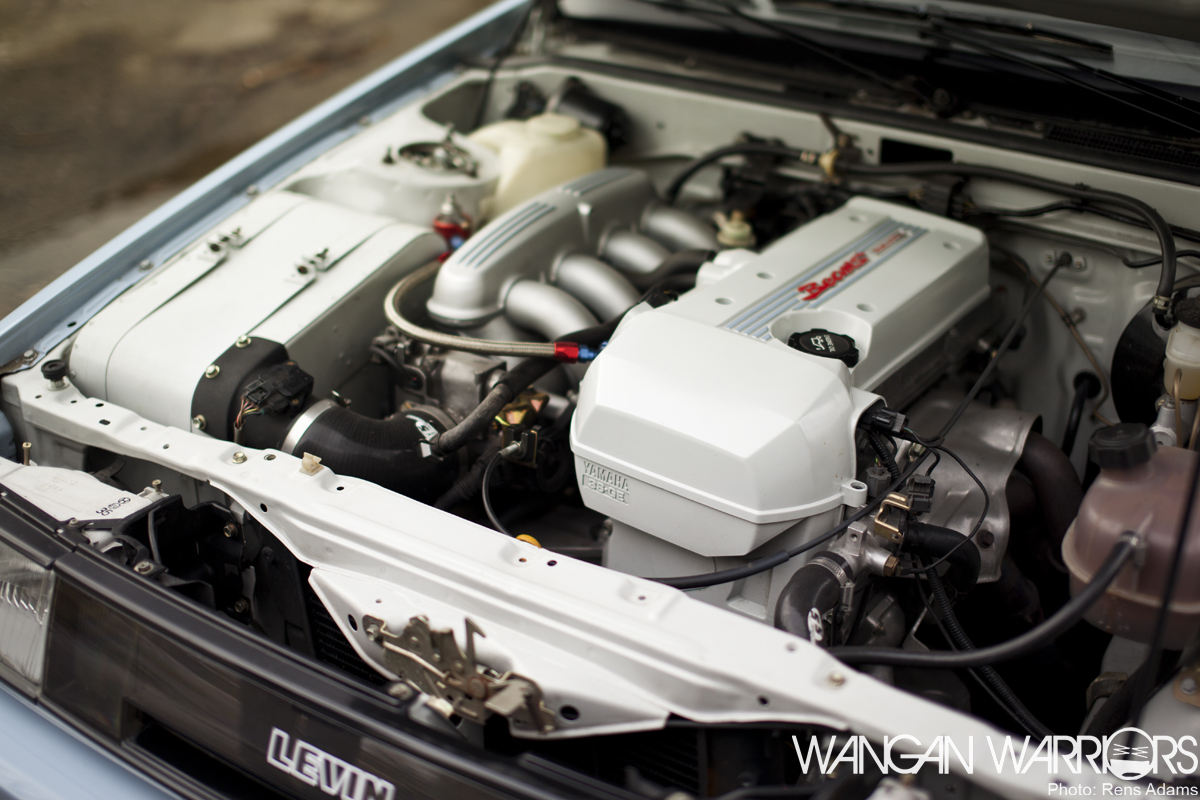 It’s always a pleasure to capture this engine bay. Aram Laumen knows how to treat his daily driven Levin and he has a sick Impreza project as well, but I’ll be telling you more about that in the future. As the day was slowly coming to an end at the Vasim, it was just getting started at the Waalhalla skatepark which is located next to the Vasim. 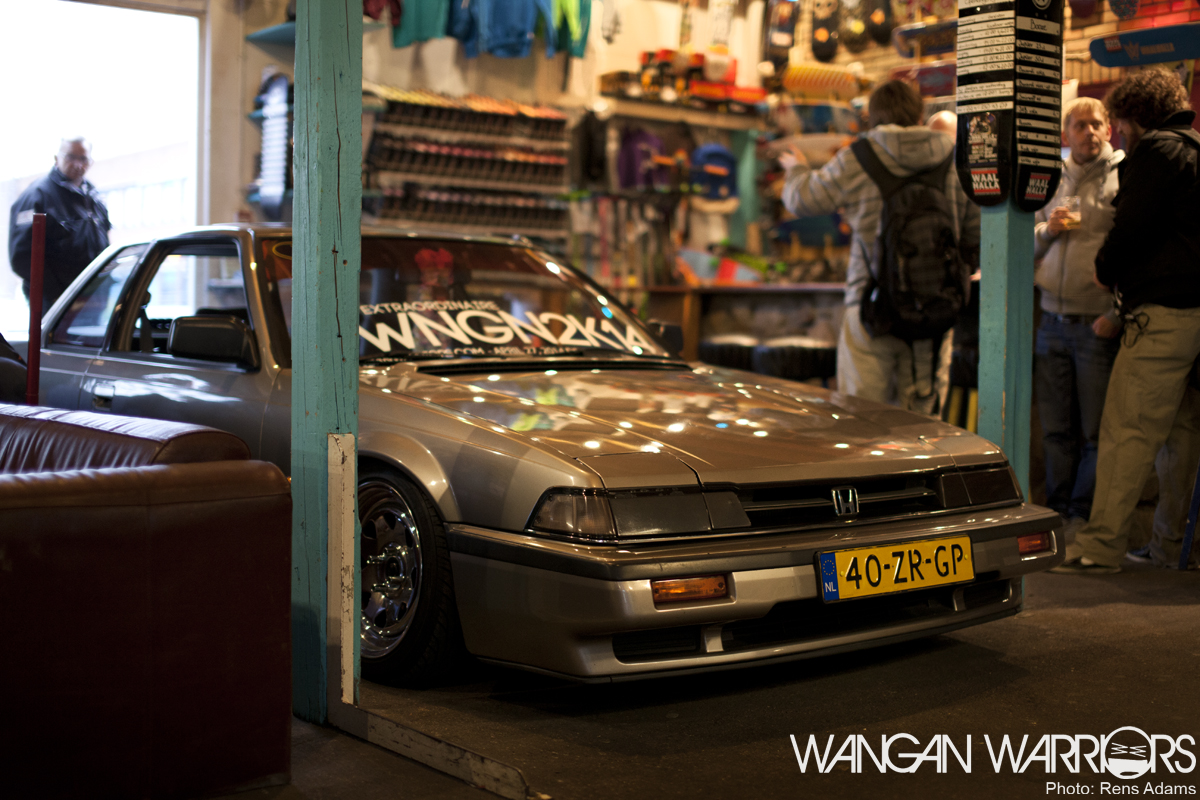 Yes, that’s a very low Honda Prelude and if you look close enough you’ll recognise a few skateboards so that means it is making its way into the skatepark. Has op ‘t Root is the owner of this Honda and thought it was a good idea to get the car inside of Waalhalla. At first it looked like there was no way the car would fit, but in the end we managed to get it through the door, with basicly no room left on either side of the car. 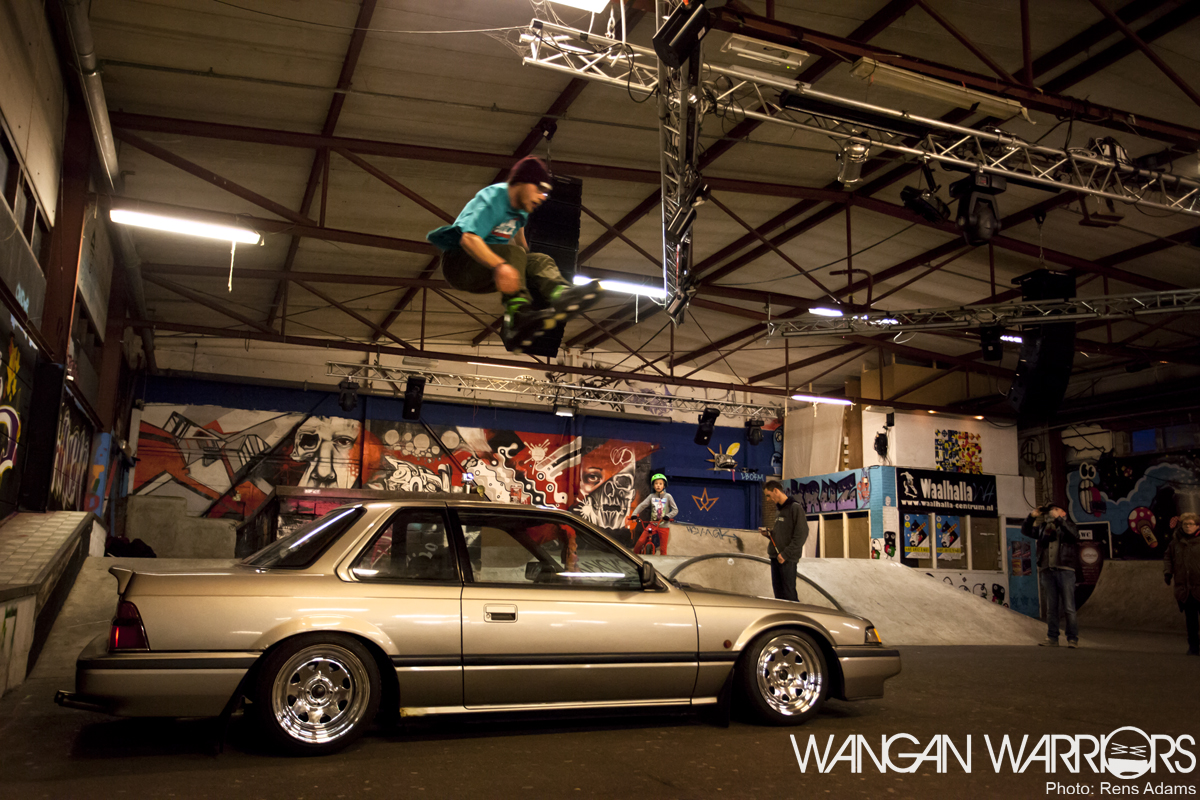 And knowing first hand that skaters use every single object as an obstacle to grind on or jump over, it didn’t take very long before Ruben Smulders threw himself over the lowest car of the day. And I can tell you, we almost wanted to park two cars next to eachother because the airtime that this guys had was sick! It was nice to mix these different urban cultures and we hope you guys had as much fun as we did. 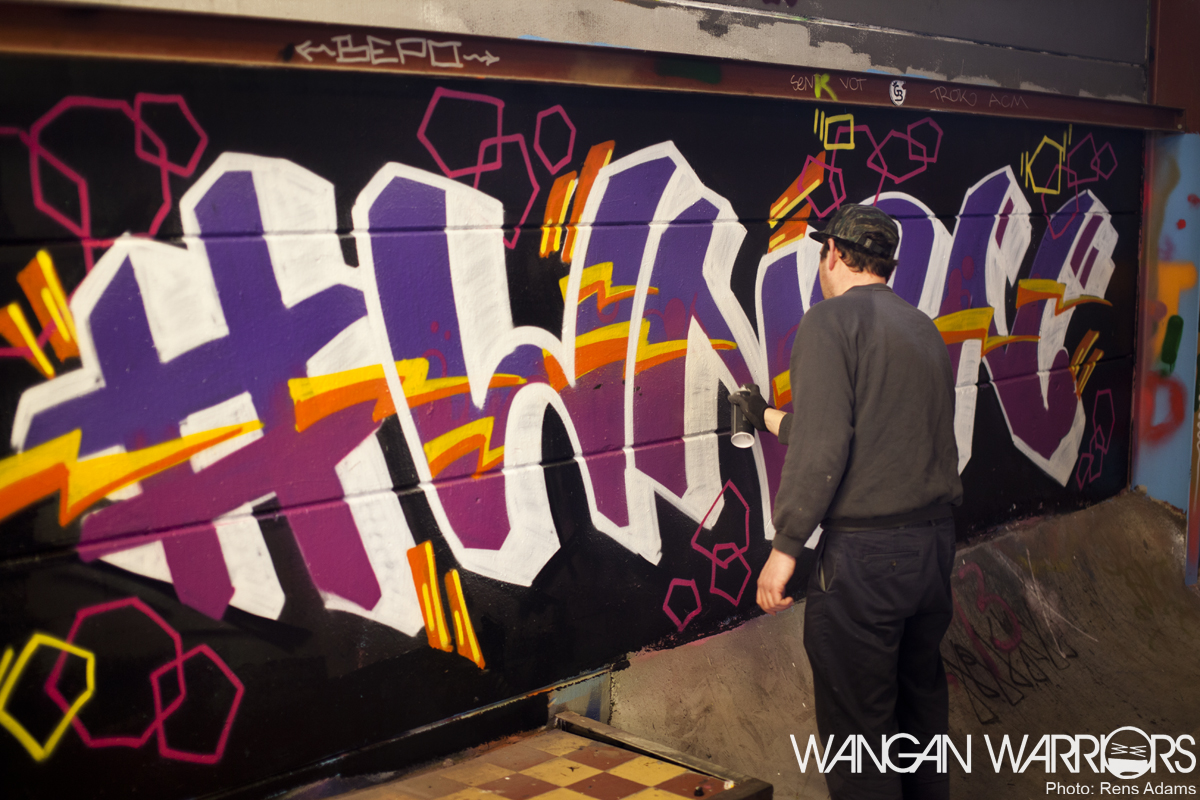 I’m the wrong person to judge graffiti art, but I believe I’m right when I say that Michiel from DMPD knows what he’s doing. His work was far from done at the time I captured this photo but it really became a nice piece of creativity. Thanks for all the support and your hard work! As the day was coming to an end I was out of memory cards and battery so it was time to head home. Another long but oh-so-awesome day with friends and cars and all for one good cause and that’s promoting the SH*T out of #WNGN.

Are you excited yet? We are!

Below you’ll find some practical info about the event: