There has been a huge amount of anticipation for the 2014 Maxxis British Drift Championship, the drivers and teams are under more pressure than ever to have the most competitive and well-presented cars and as such there have been no end of new liveries, new performance products and entirely fresh builds. Round One at Lydden Hill was the perfect opportunity for the drivers to showcase their creations after what always seems like an endless winter. 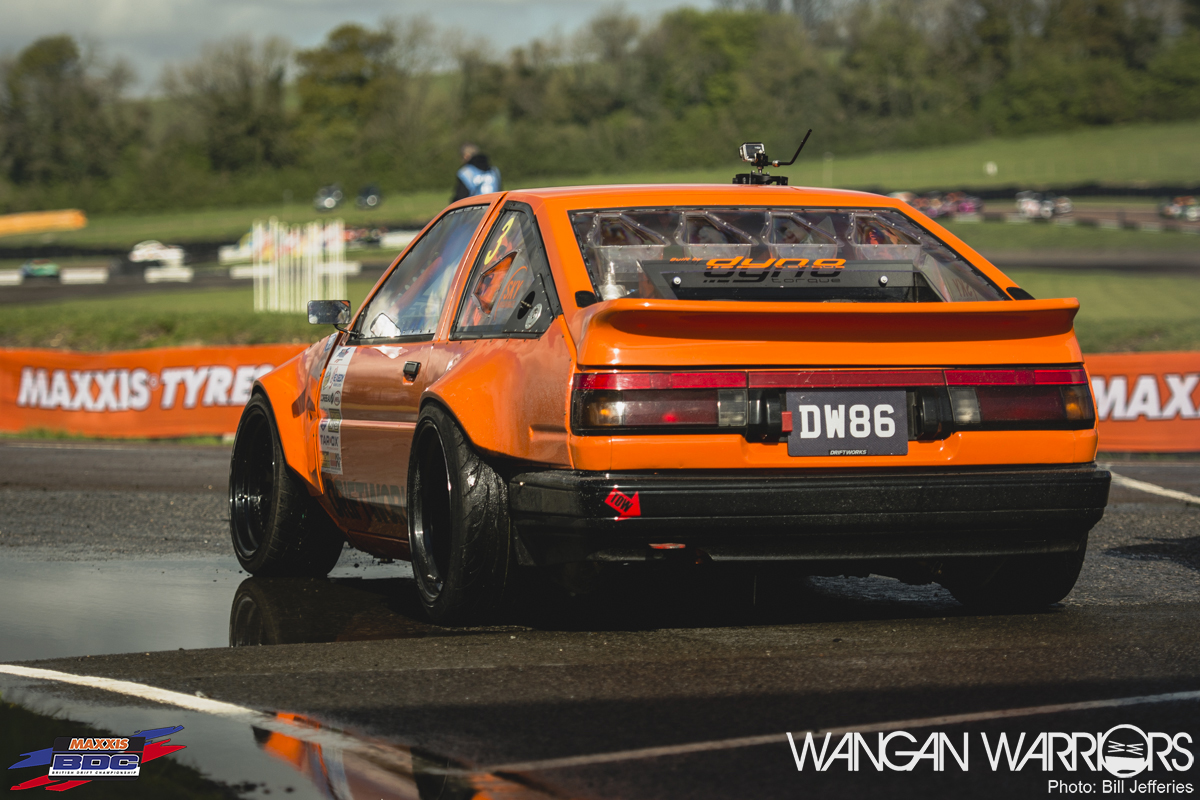 I’d imagine anyone who has an internet connection has most likely heard about Phil Morrison’s DW86 build. I had been following it since day one on Driftworks, and it’s made for a fantastic read. The sheer amount of effort which gone into it, whilst using completely unique designs and ideas has made for an incredible build. It’s not every day you see an AE86 fitted with a 6.2 litre Chevrolet engine! 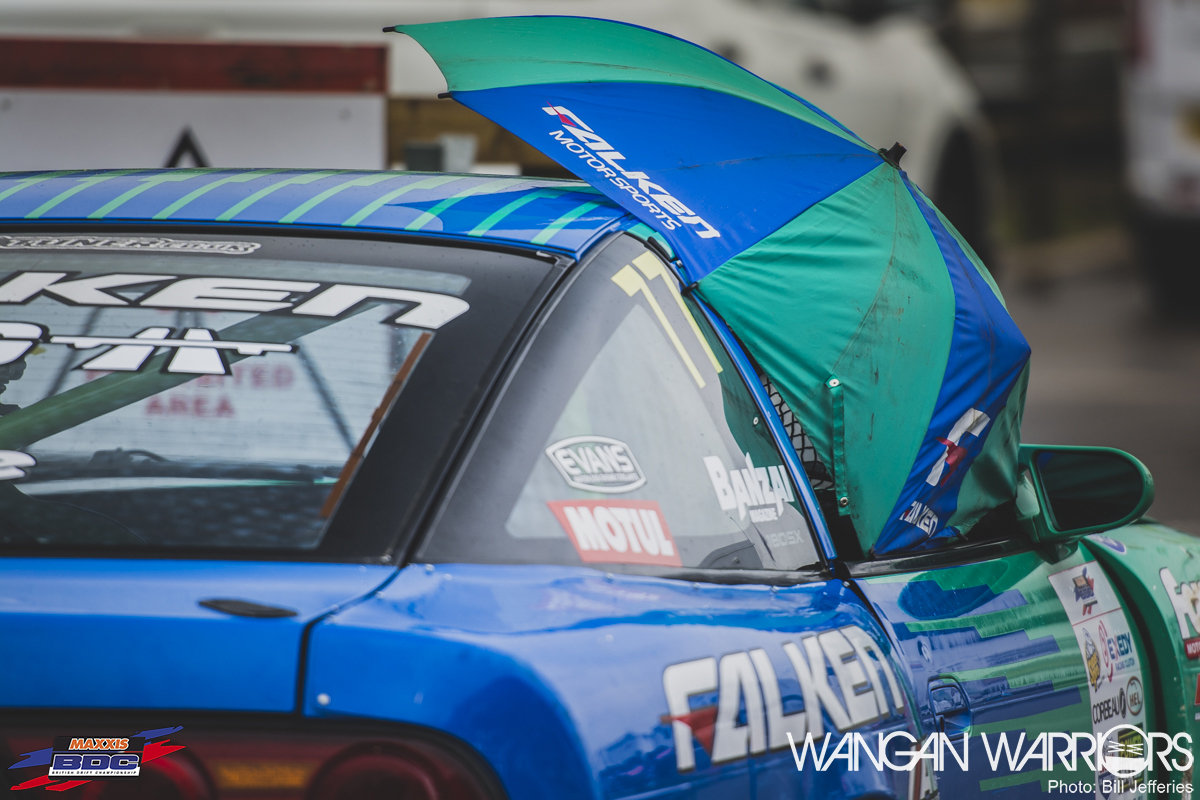 The first round of the calendar is always a nervous time for drivers, with new builds, untested setups and winter cobwebs rife throughout the pits. To compound these issues, the forecast was for rain! The heavens opened before practice and flooded the track, but the teams were eager to get out there and put their new cars to the test regardless of the conditions. 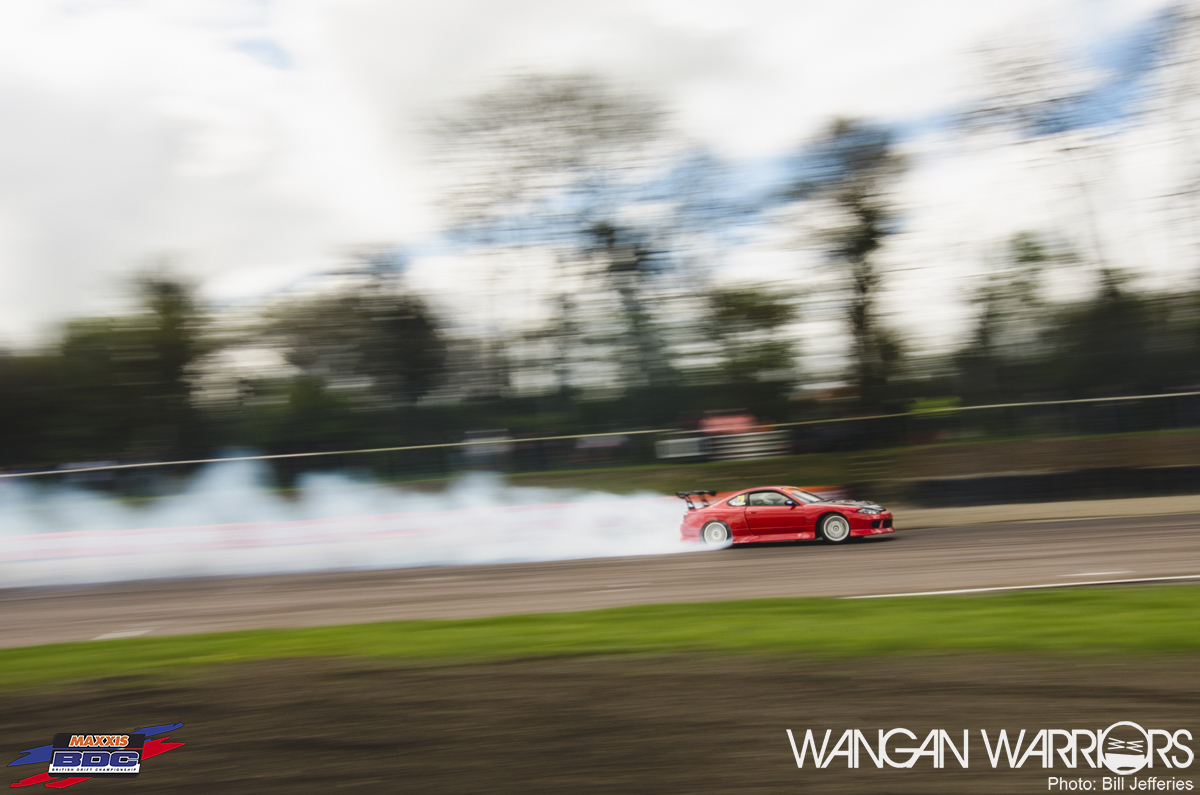 As practice got underway the sun came out and the track started to dry, it was finally a chance for the drivers to put their foot down – with sun, comes smoke! 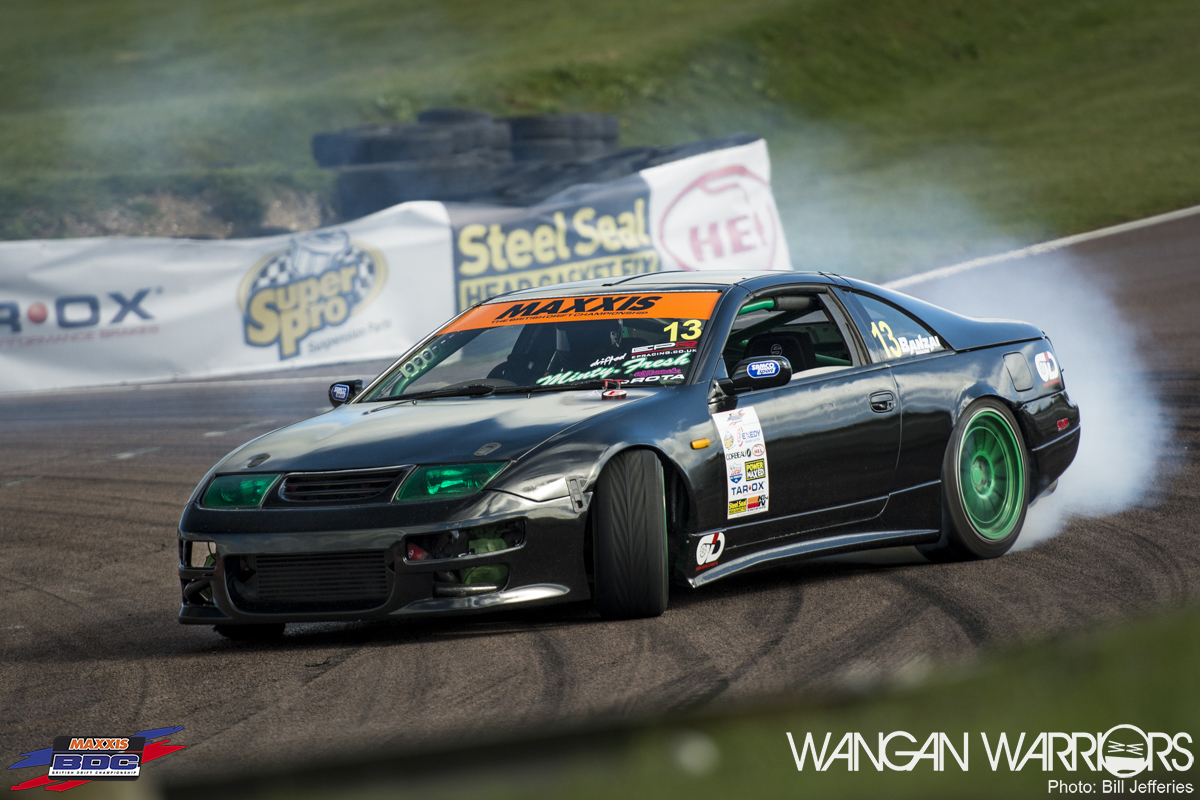 As always with the BDC, there’s a great variety of cars. Matt Samuel had a chance to reveal the fresh new look on his 300ZX, a change of title sponsor means the distinctive blue vinyl wraps have made way for Darth Vader black. Despite the 300ZX not being a common choice it always looks comfortable on track with Matt behind the wheel. 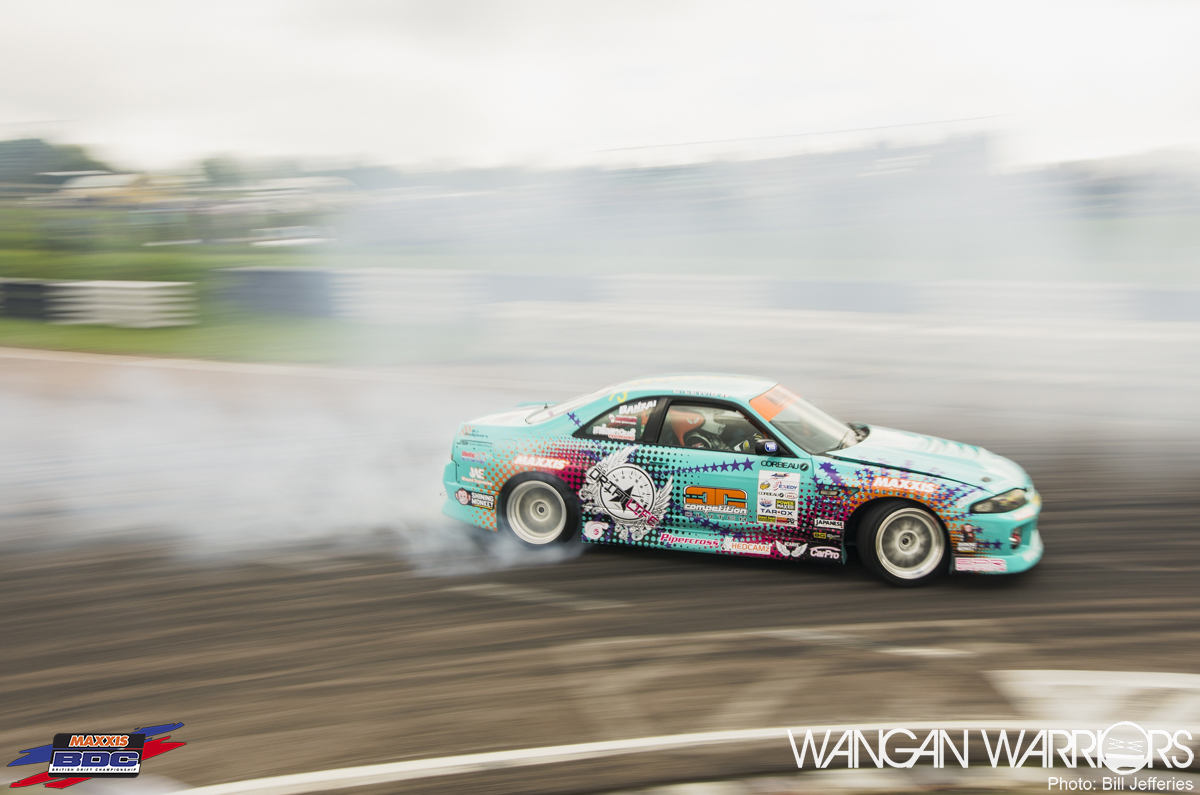 Some of the new liveries were really standing out, the R33 of It’s a Drift Life certainly wasn’t lacking colour! 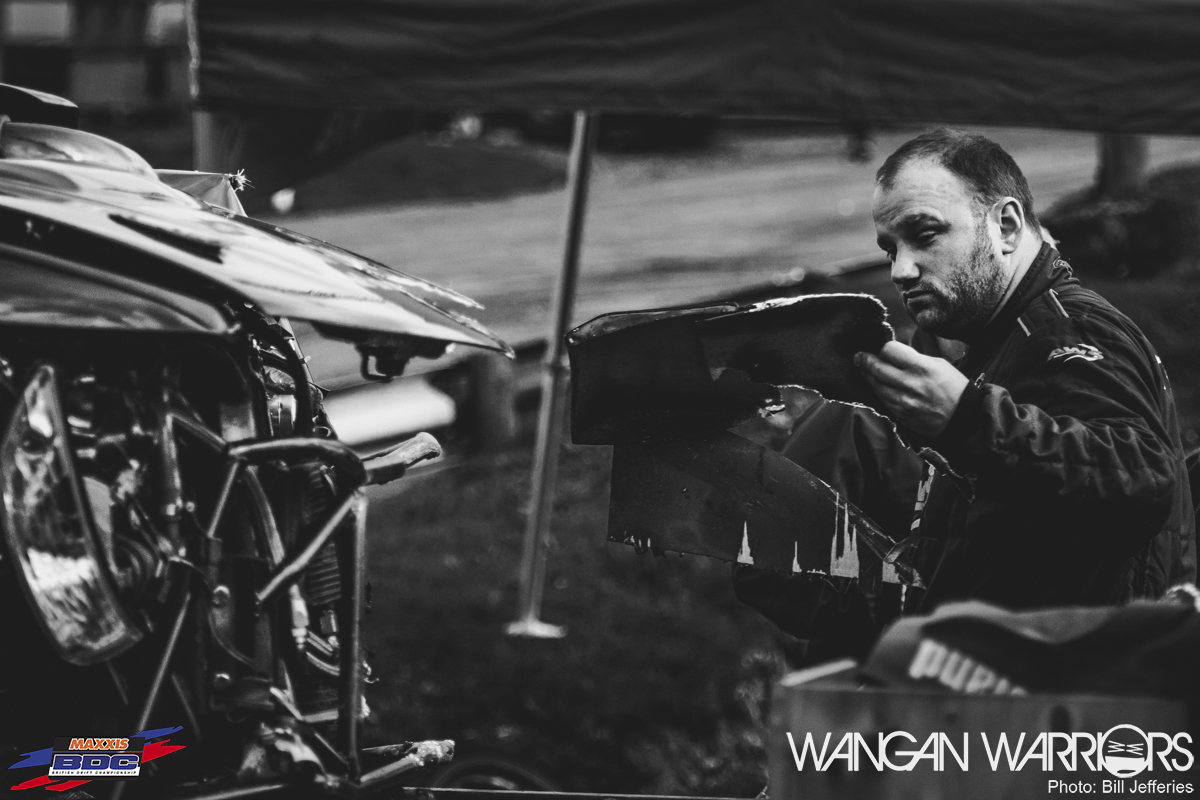 During practice, the lack of seat time for new builds and winter tweaks brought some nervous moments and cars weren’t quite sticking to the lines they had planned on the track. Nathan Chivers got caught up in a huge cloud of smoke and fell victim to the barriers placed at the outside. Nathan was noticeably gutted, and quite rightly so – months of hard work, patience and preparation had been spoiled by a split second. 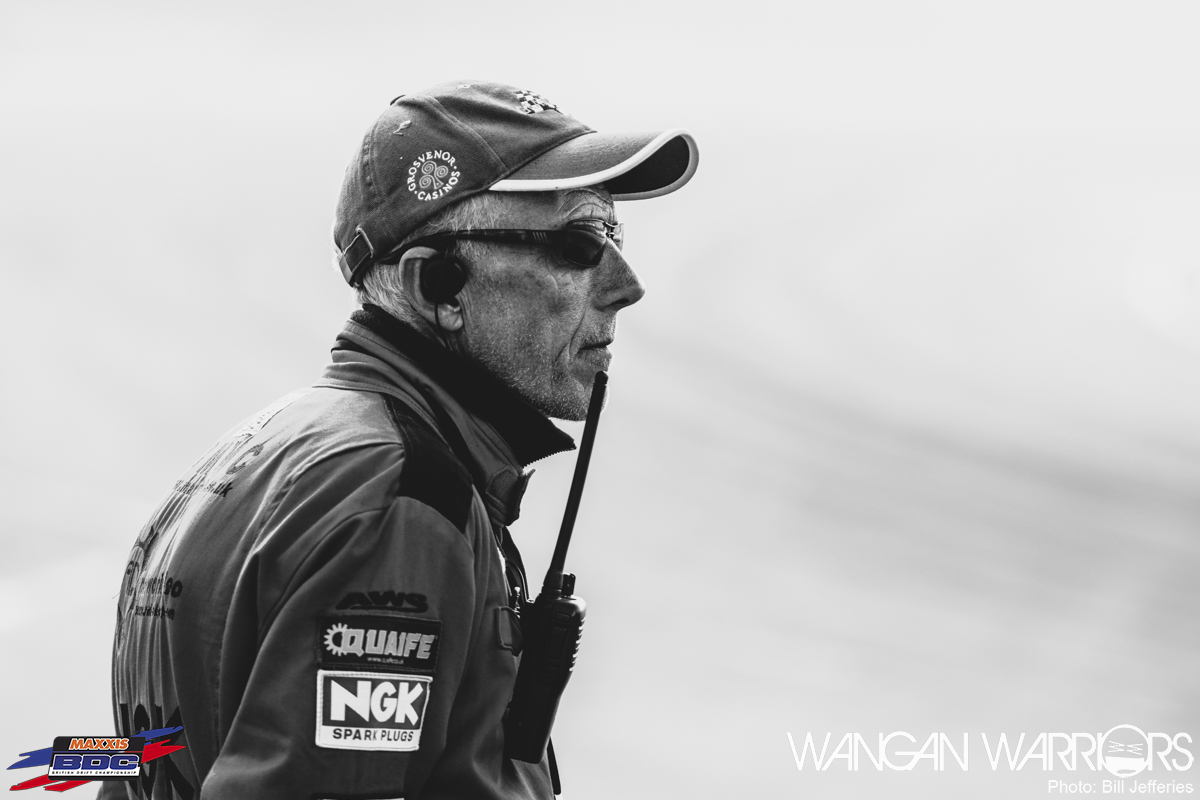 Whilst instances like this are sadly inevitable in motor racing, the seasoned marshals at Lydden Hill are always on-hand, even if it is sometimes a struggle to see through the thick cloud of smoke! 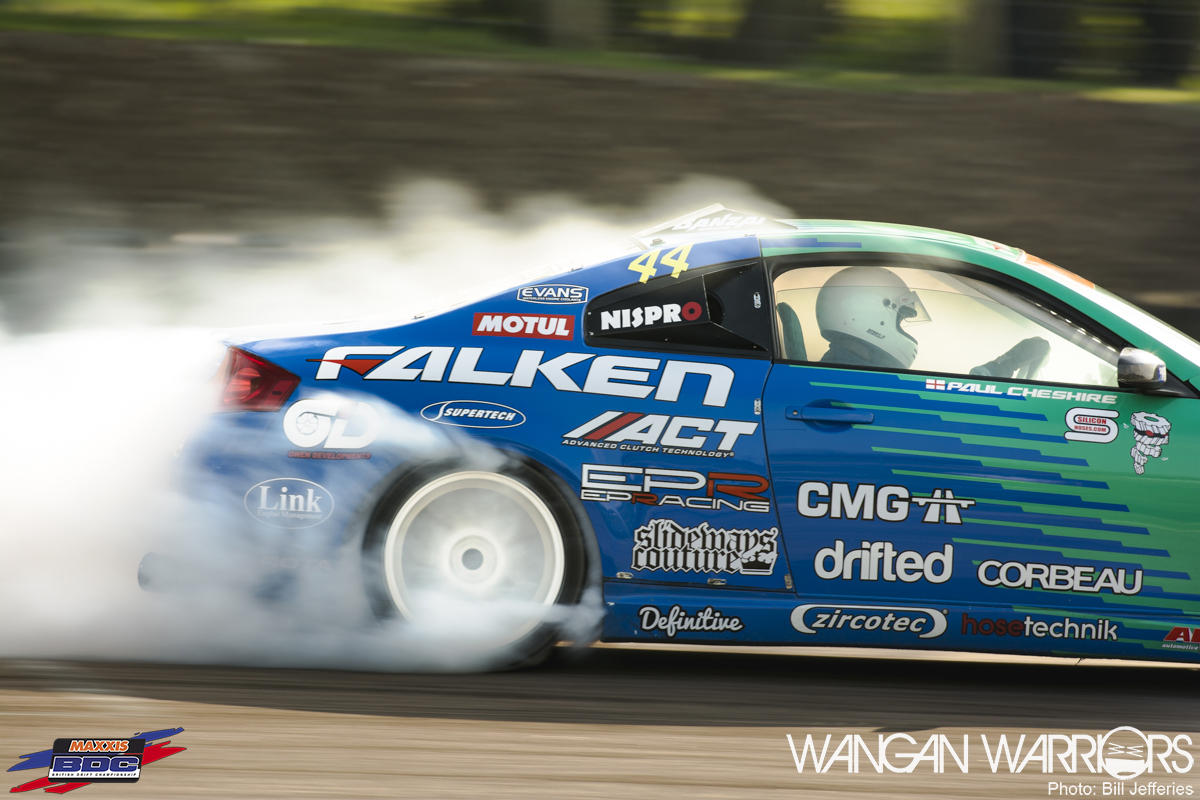 As usual, Paul Cheshire wasn’t shy when it came to destroying tyres, his 2JZ powered G35 ensuring that the whole circuit was hidden in a Falken cloud. 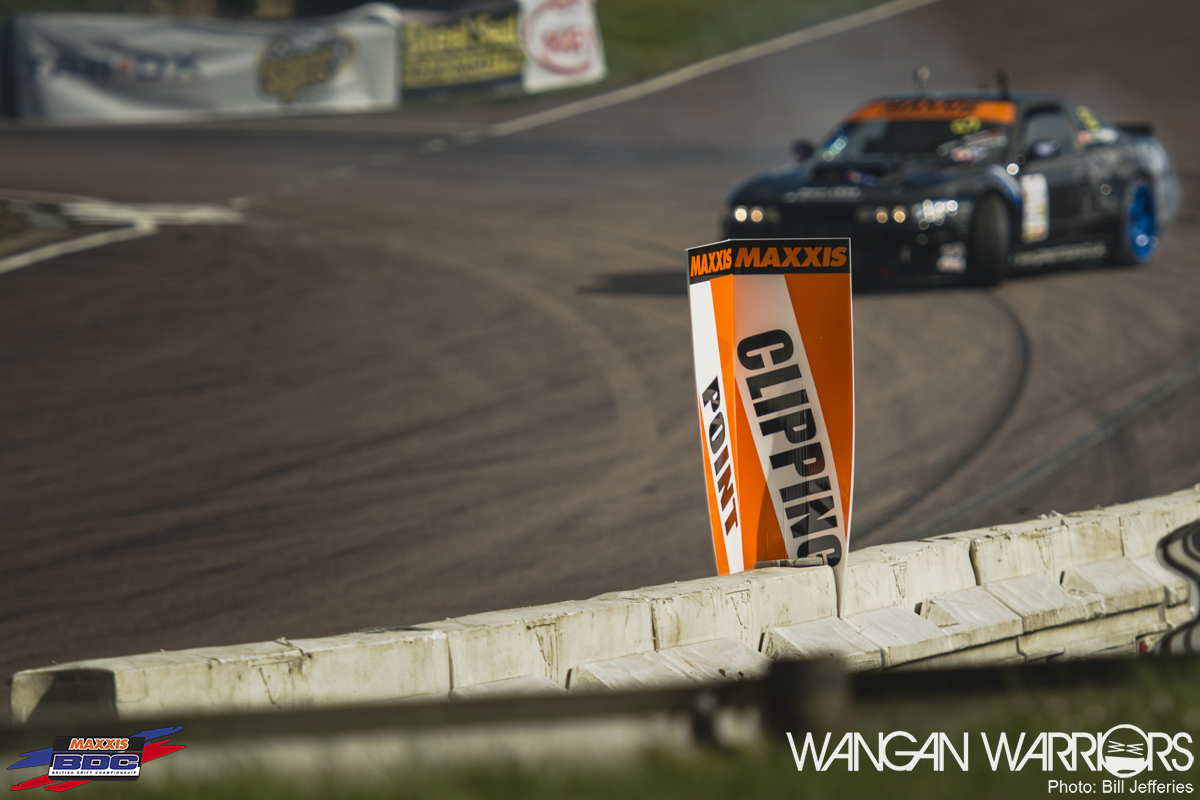 As Saturday afternoon qualifying got under-way, it was time for the drivers to put in solo runs and prove what they could do to the judges. Clipping points are placed around the track and aim is to perfect a line that takes you as close to the clips as possible. The drivers were all fighting to earn their place in the Top 16 battles which would be taking place for each of the three BDC classes on Sunday. 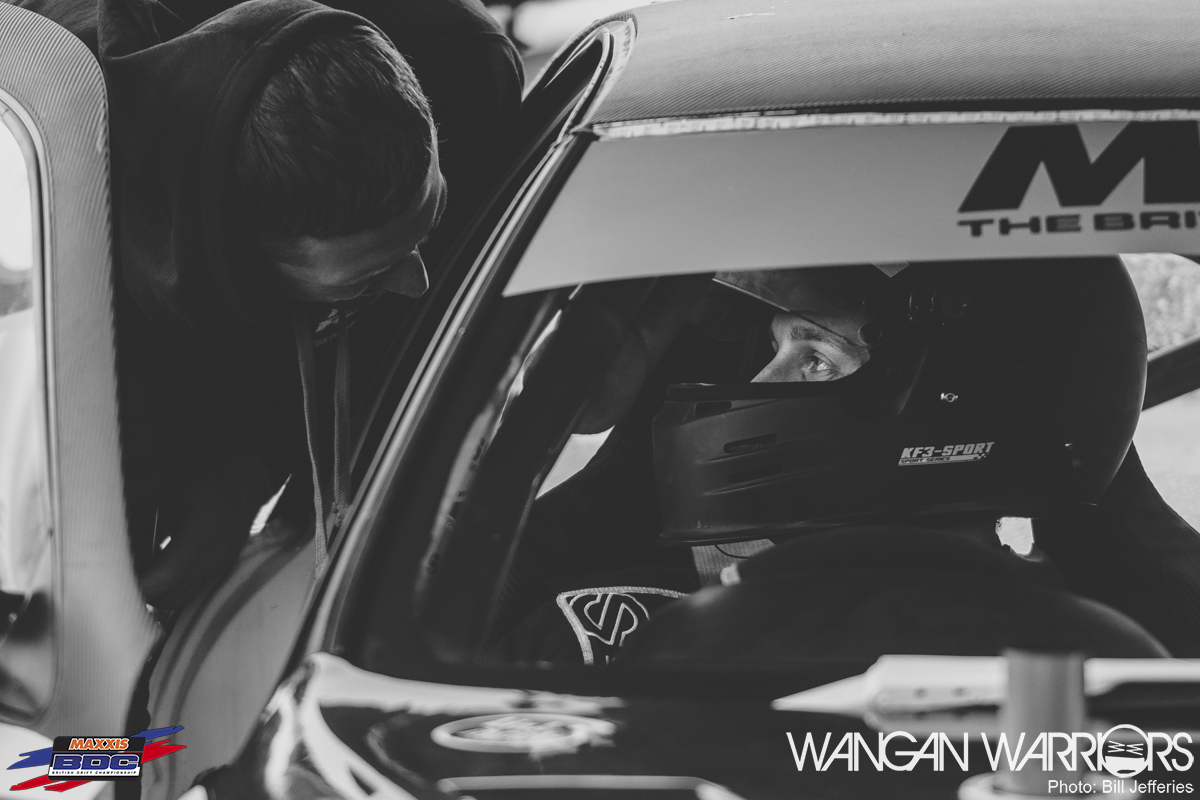 Drivers can’t see or hear everything from the cockpit so friends, family and team-mates are continually passing on information and support either with intercoms or an ever-welcome face to face smile. 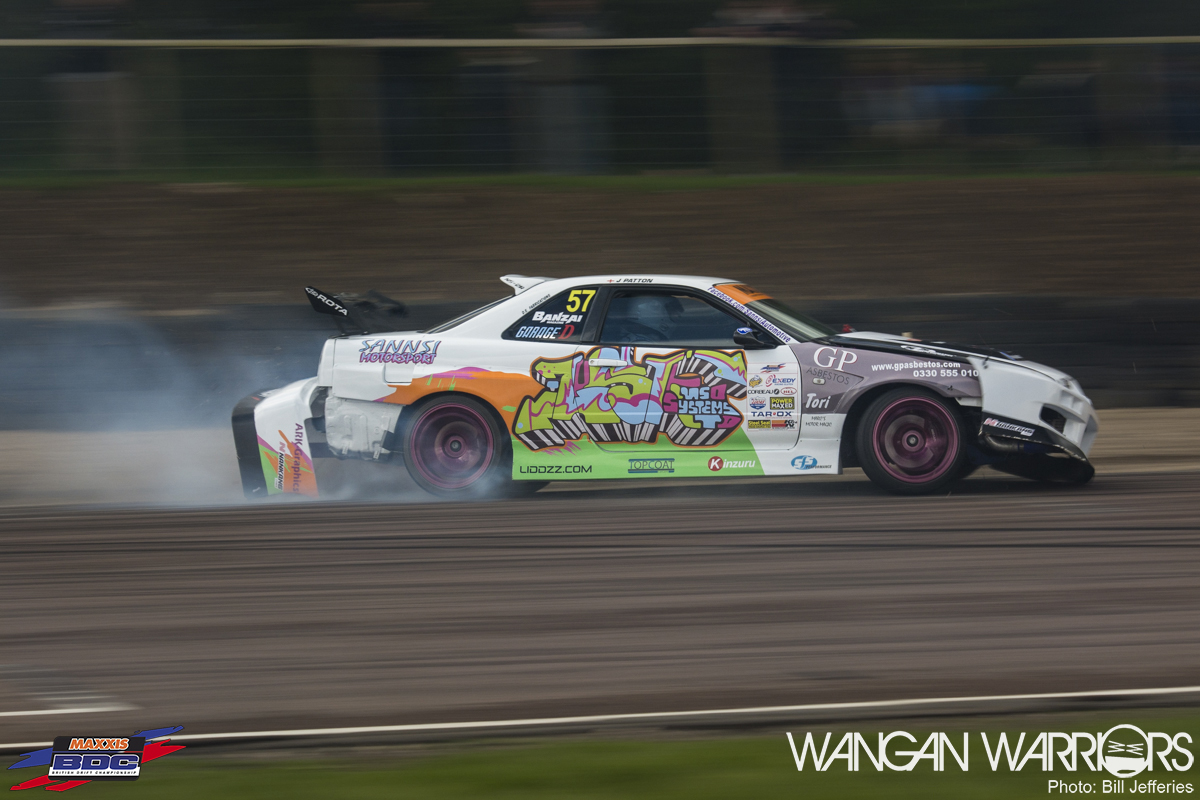 With the cars being pushed to the limits and the constant search for improvement, it’s only a matter of time before the freshly built cars are looking a little worse for wear. Lydden’s gravel traps are very unforgiving and even dropping one wheel off track can result in the cars returning to the start line missing some lightweight panels. 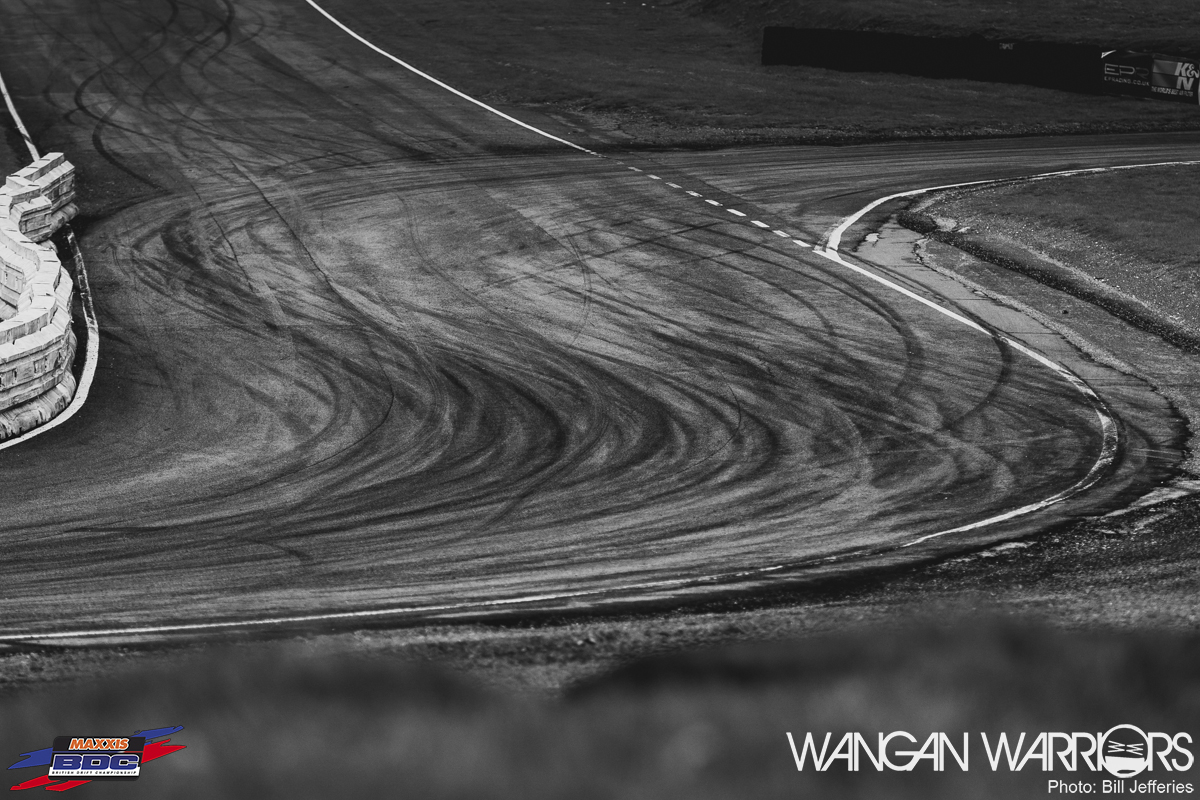 With Saturday’s qualifying coming to a close, the Top 16 drivers were announced and the circuit was swept clean. Time for the qualifying drivers to celebrate and those less lucky drivers to reflect. 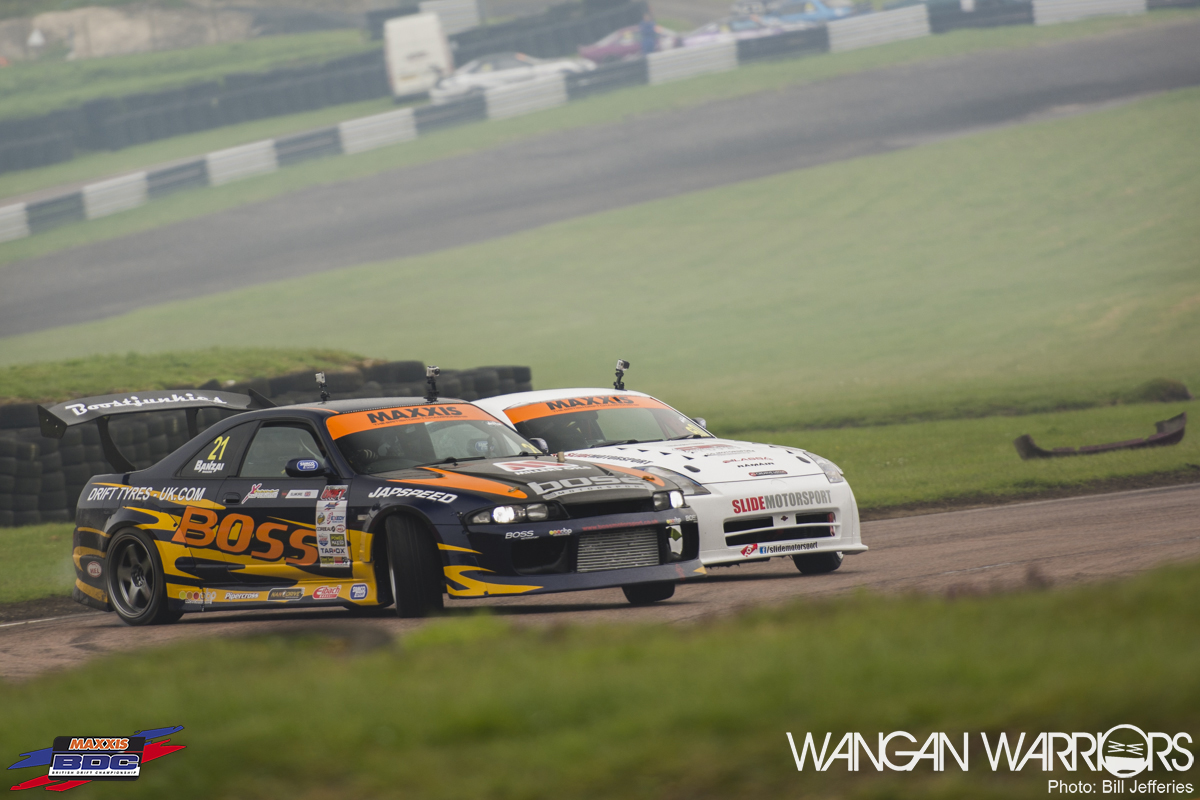 Early wake-ups on a Sunday aren’t usually a welcome prospect, but after a morning of preparation and repairs in the rainy pits the drivers got back on track. The weather soon picked up and there were some fantastic battles being produced and the drivers weren’t scared to go door-to-door with their freshly built cars. Slide Motorsport’s Matt Stevenson and Ollie Elmore of Boss Motorsport put on a great battle for the semi-pro final, with Matt Stevenson ending up taking the win. 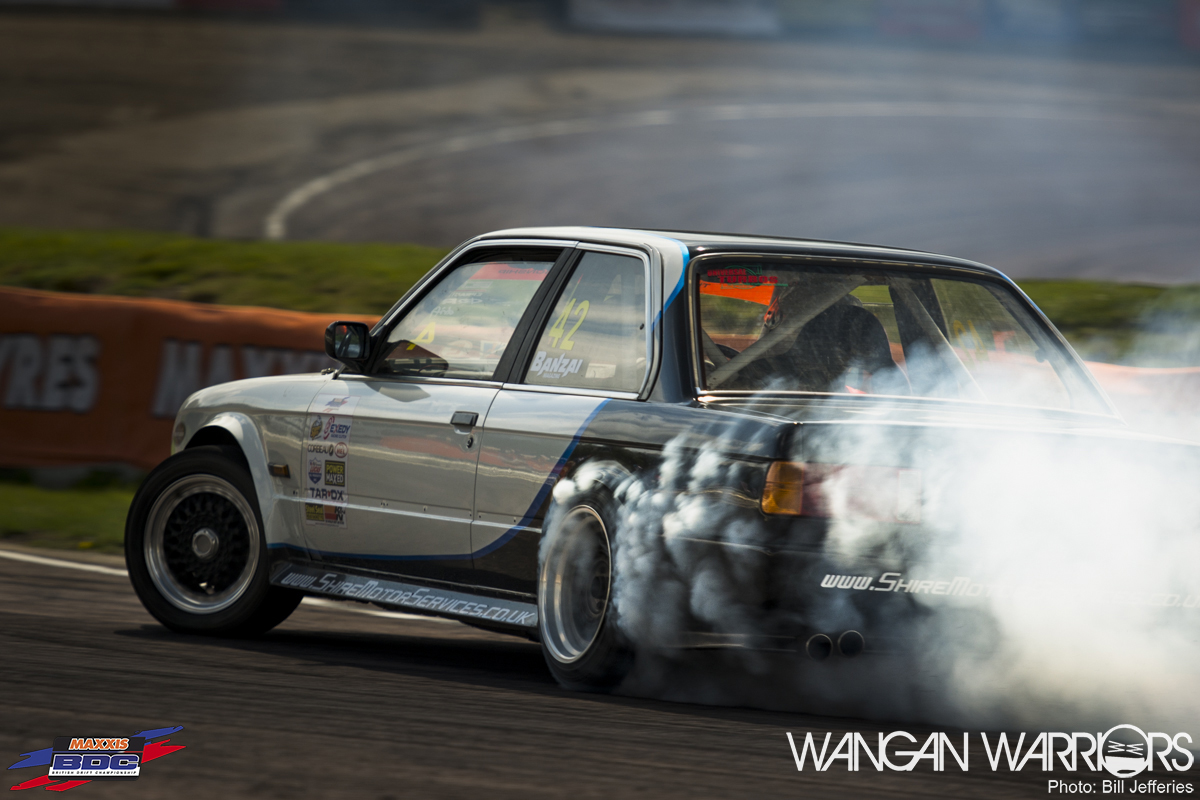 Pete Green in his V8 BMW E30 was another top performer throughout the weekend and managed to clinch third place in the semi-pro class. 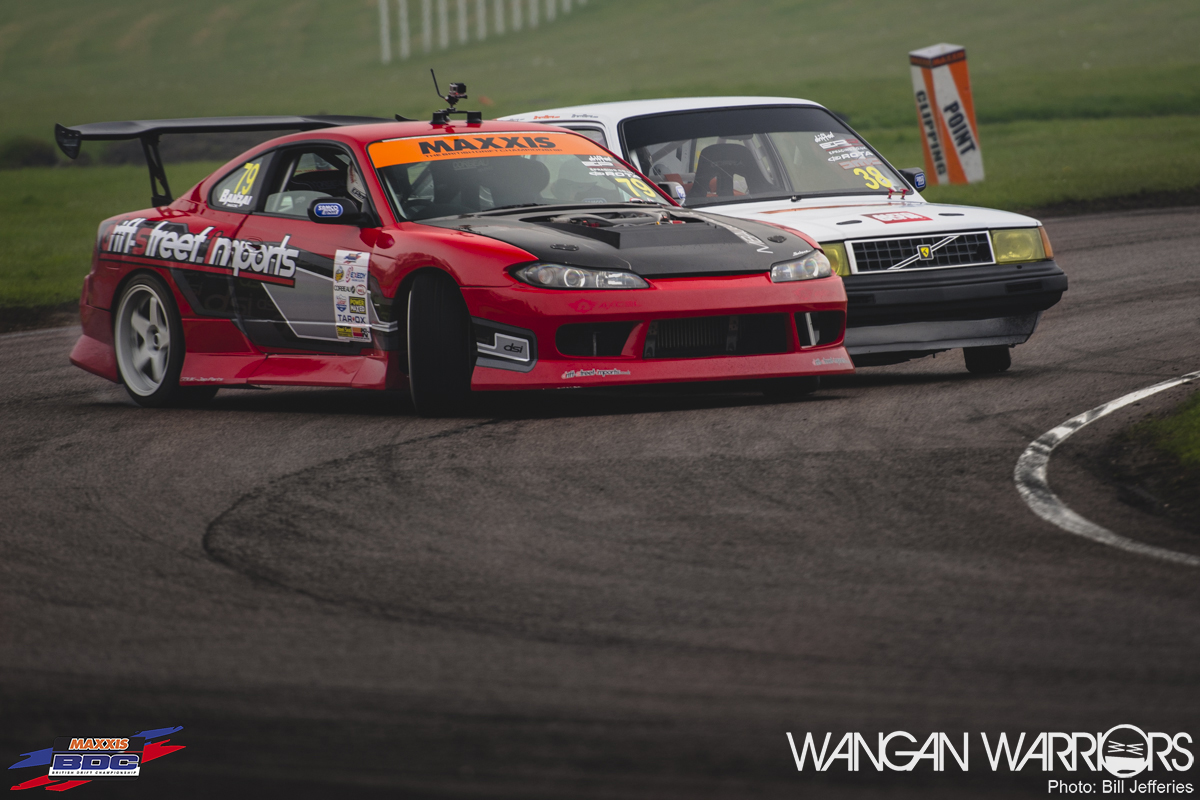 In the Pro Class Final, Dan Firmager’s V8 Volvo went up against Martin Battye’s Drift Street Imports S15. During the battle – Dan’s Volvo got a little bit too close to the rear quarter of Martin’s S15 which resulted in a broken driveshaft on the leading Nissan. Martin was given time which allowed him a chance to quickly replace the shaft and get back on track to continue the battle. 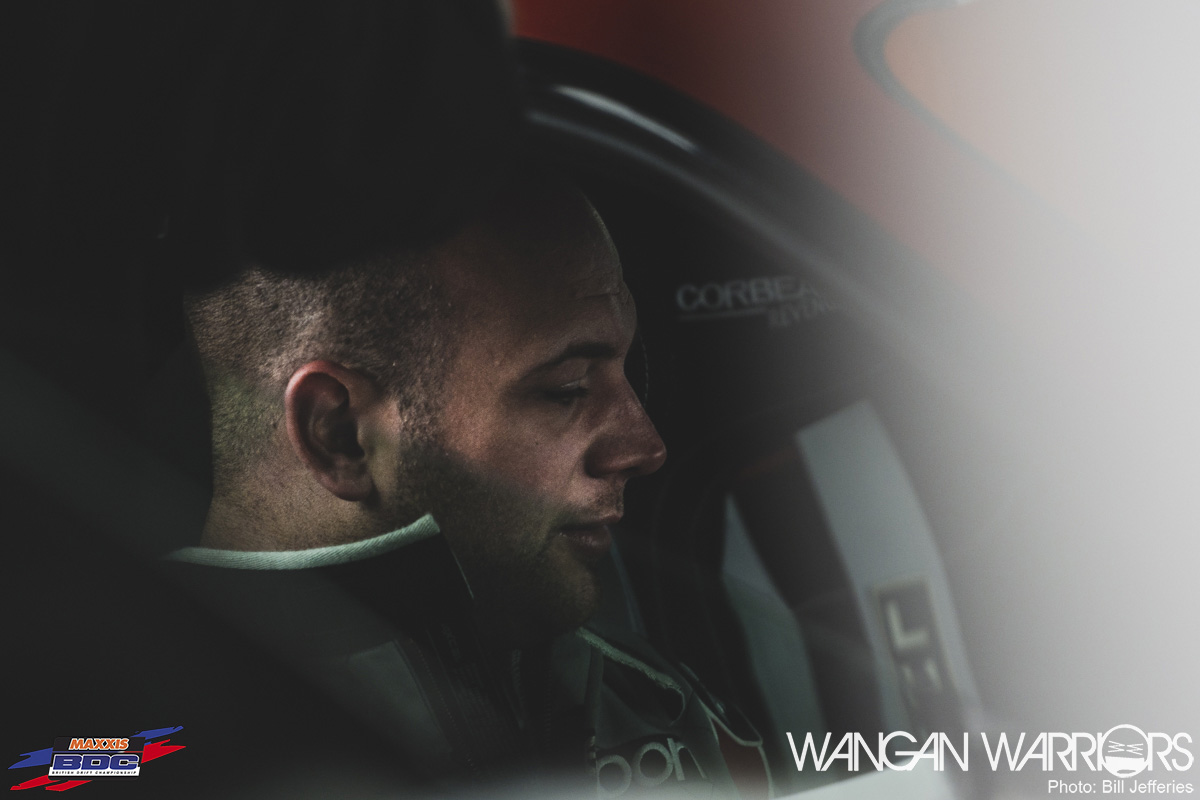 After coming back out, Martin Battye eventually took the win in an extremely close and exciting battle. Full credit goes to Dan Firmager though for his consistently impressive battles throughout the Top 16. 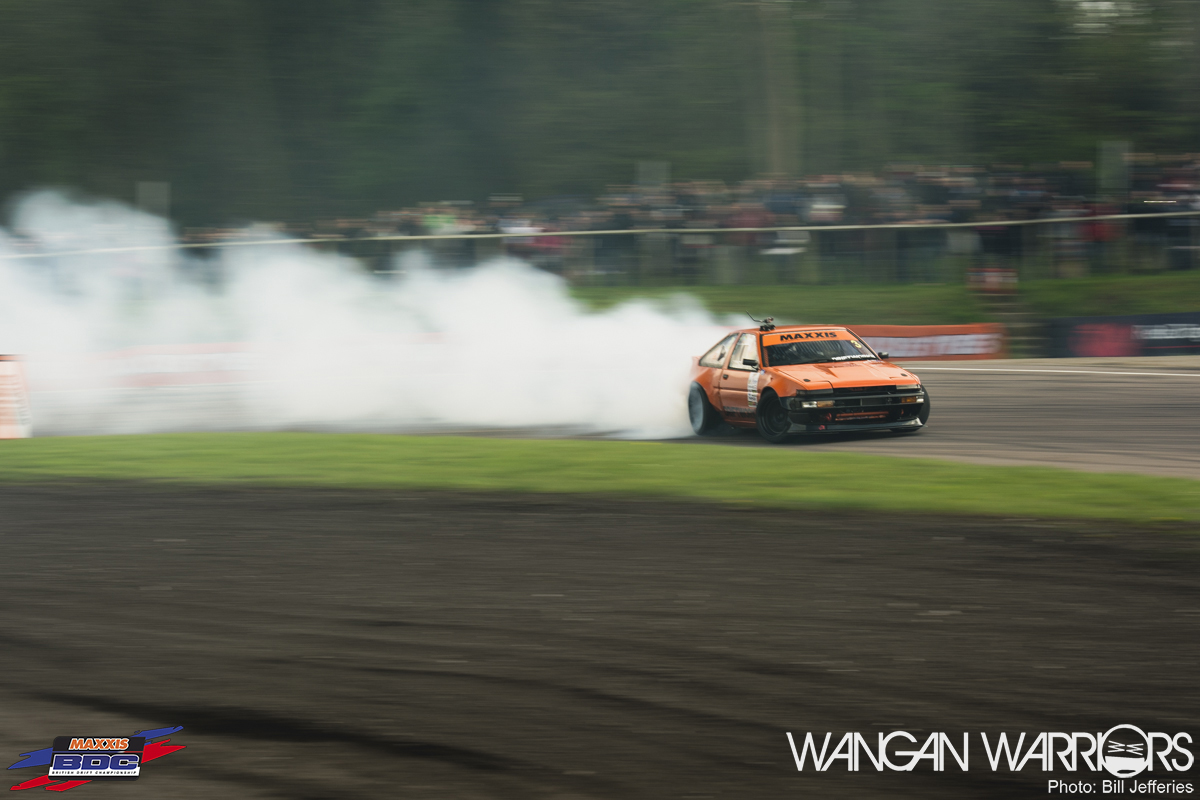 Everyone was looking forward to seeing what the DW86 was capable of in the Top 16 battles after managing to qualify despite a few issues on the Saturday. Unfortunately, mechanical problems are also common early in the season, and the DW86 was forced to retire after snapping another heavy-duty propshaft with its brutal combination of torque and grip. 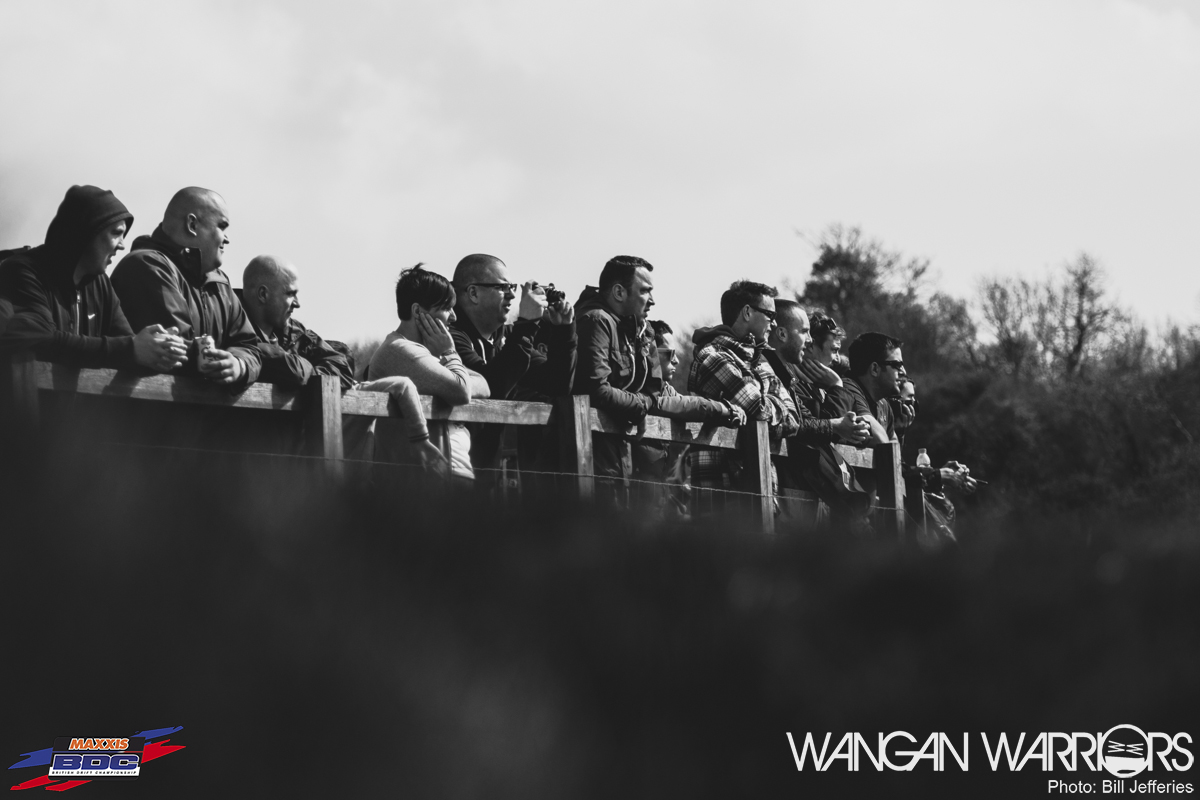 After the Pro class finals were over, the crowd assembled for the last event of the day – the Super Pro battles which would ultimately see Jack Shanahan’s M3-turbo engine’d S14 go up against Team Japspeed’s S15. 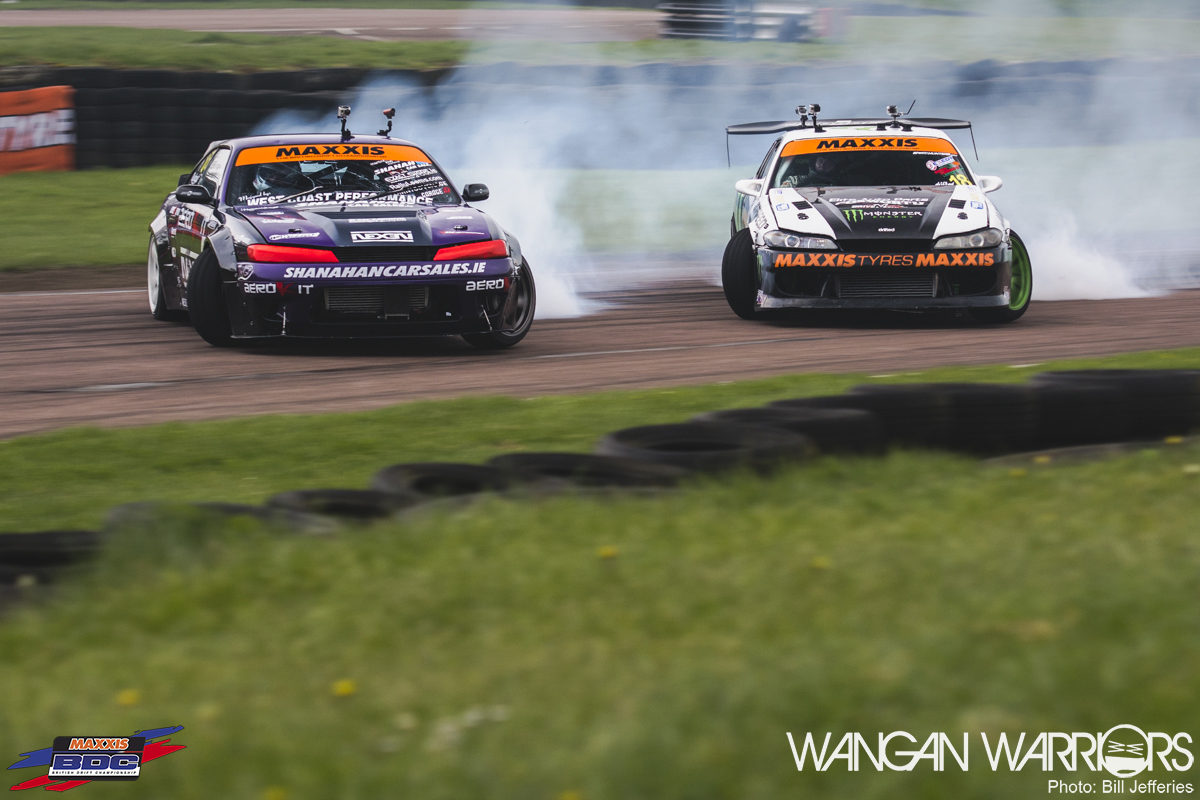 It was an extremely close one to call, with both the well-experienced Shane O’Sullivan and 14-year old Jack Shanahan giving their very best efforts. After an intense battle the judges called for a ‘One More Time’ rematch to be able to decide the winner. 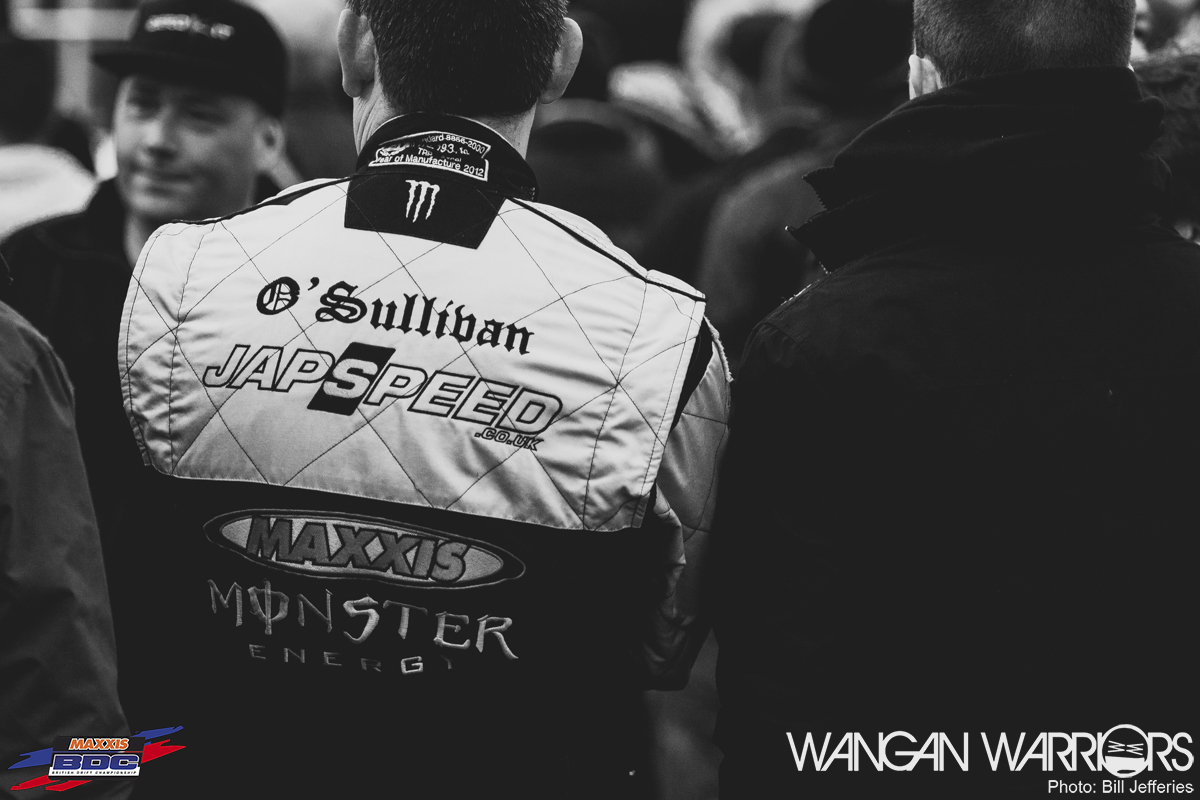 With the judges satisfied, the drivers left the track and it was time to head back to the paddock. The winners aren’t announced until the crowd and drivers are gathered around the podium but after an anxious wait the decision was announced. 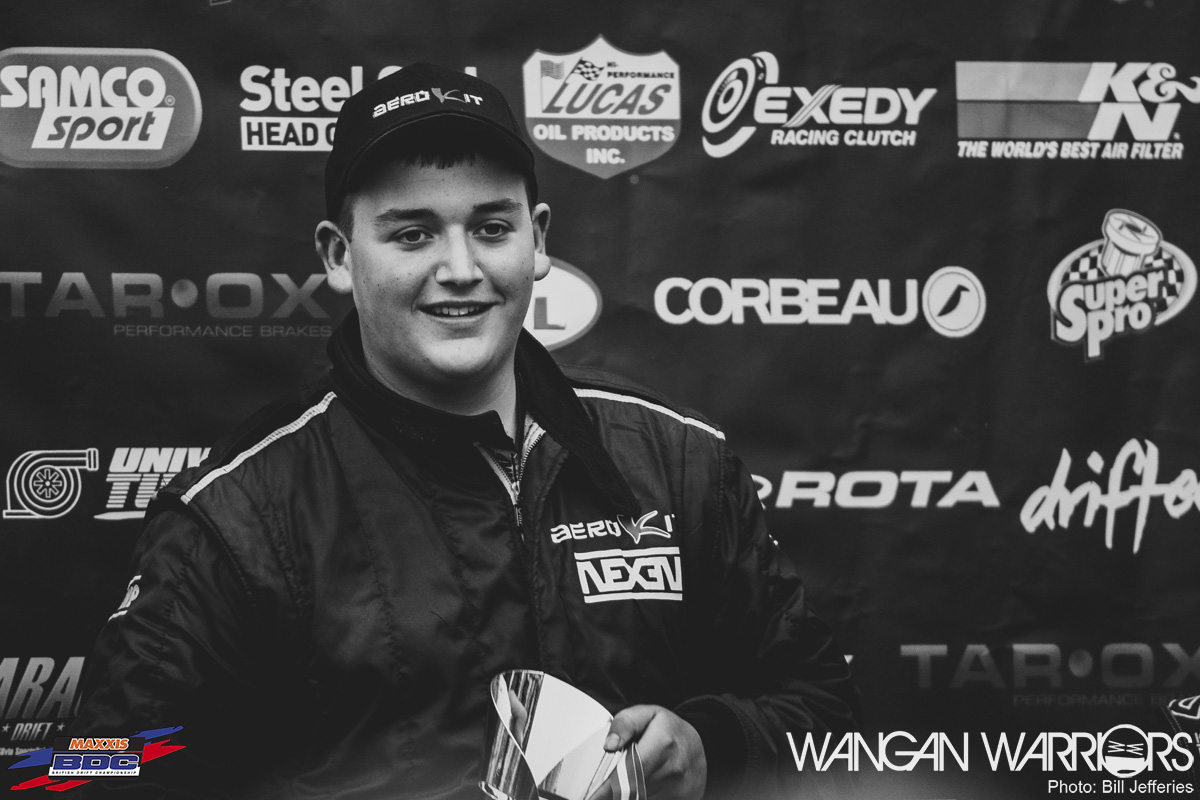 It was official, Jack Shanahan had won Round one of the Maxxis British Drift Championship’s Super Pro category at just 14 years old! An extremely impressive performance throughout the weekend meant an undeniably well-deserved win for the Irish teenager.

Remember the face, as you’ll be sure to see it on podiums for many years to come! Congratulations.