As I started writing the story about this Mazda, a couple of questions went through my mind. Why are some people so deeply in love with cars? Does the technology make our hearts beat faster? Did the initial impression of a certain make or model win our souls forever? Is it because we identify ourselves through some form of materialism? Or are we just funny creatures who don’t know better because everybody around us are petrolheads through and through? For me it started with a general interest for the automotive world when my friends started a car club called Wangan Warriors. My interest became both passion and love from the moment I started to capture other peoples stories with a little black box called a camera. From that point, my heart actually did beat faster when I encountered something exciting or experienced something unreal. 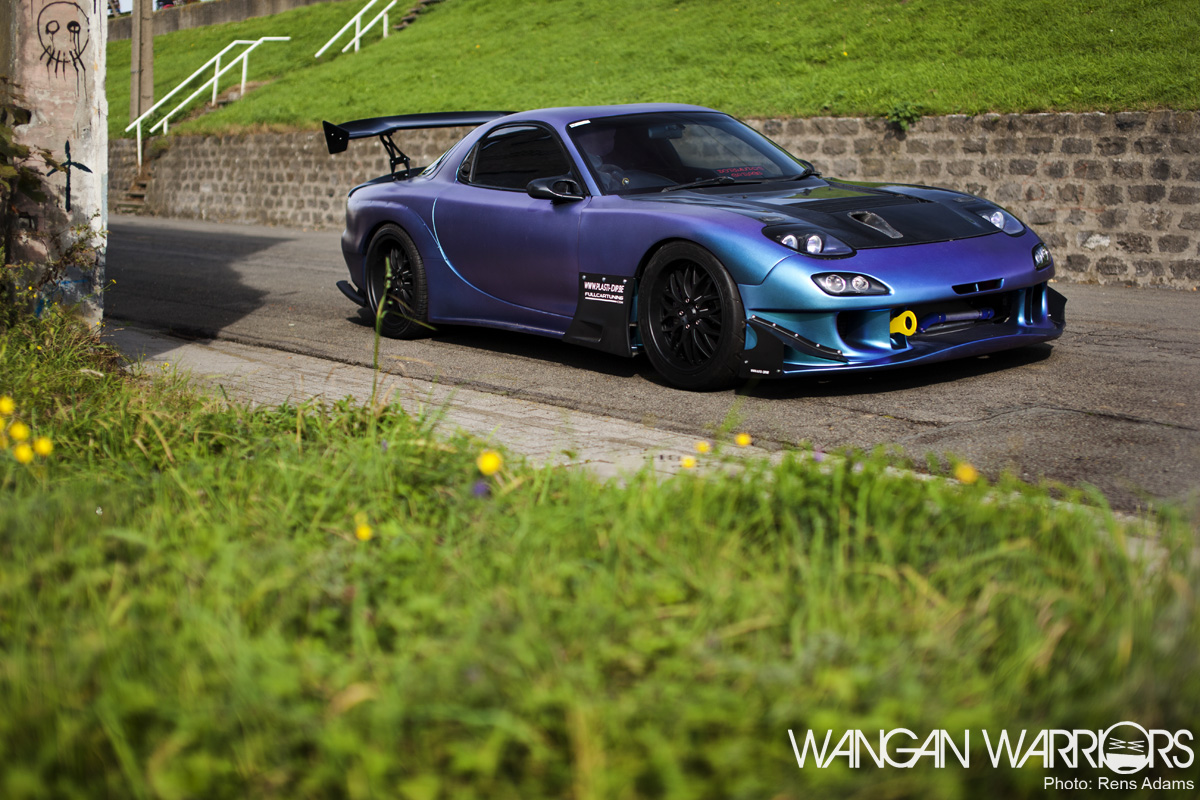 Every DMPD event has several moments that makes my heart beat faster and gets me in a total stream of excitement. One of those moments was to finally check out Murat’s Mazda RX7 FD for the first time at DMPD Finest after he has been updating me with his story and progress of his project over the course of more than 8 months. 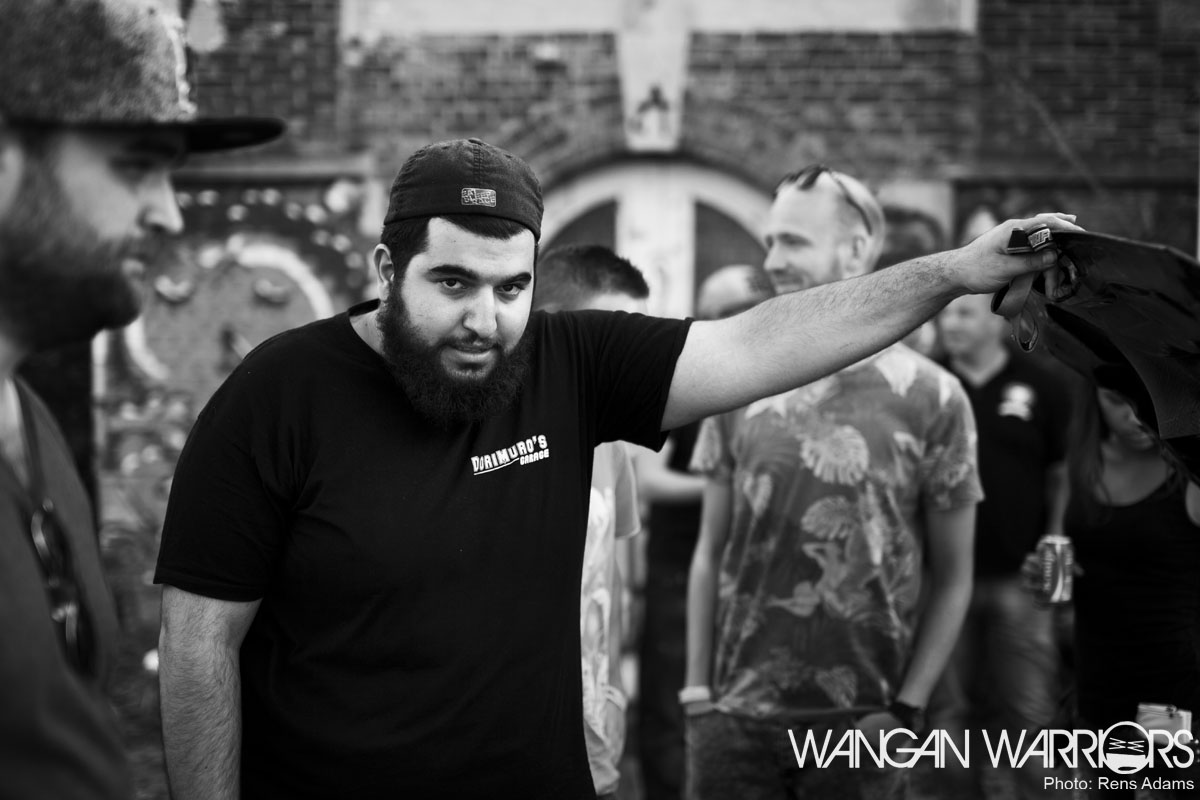 This is Murat Cakti, the man behind this Mazda project. Murat’s passion for cars actually started with his love for BMW M3’s during his childhood, so he already has been into cars for over half his life. Later at the age of 18 when he got his drivers licence, he bought a Nissan 200SX S13 and stuck to the Japanese brands. 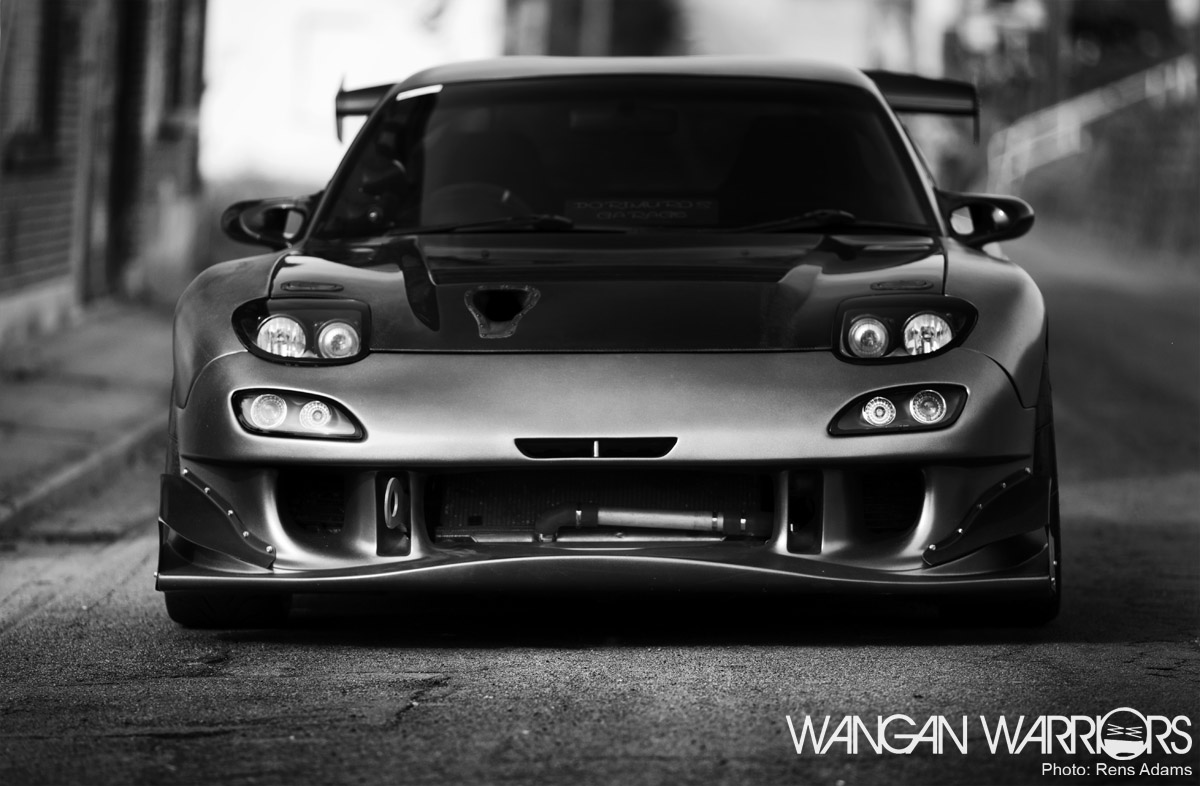 He switched cars a couple of times, from a Supra to Honda Civic and back to an S13, but that changed when a friend of his visited and put him in touch with the owner of a Mazda RX-7 FD. Murat wasn’t really looking for an Rx7 in particular because he’d heard too many stories regarding the known issues with the Wankel engines. He decided to go ahead anyway, and for him this was love at first sight. 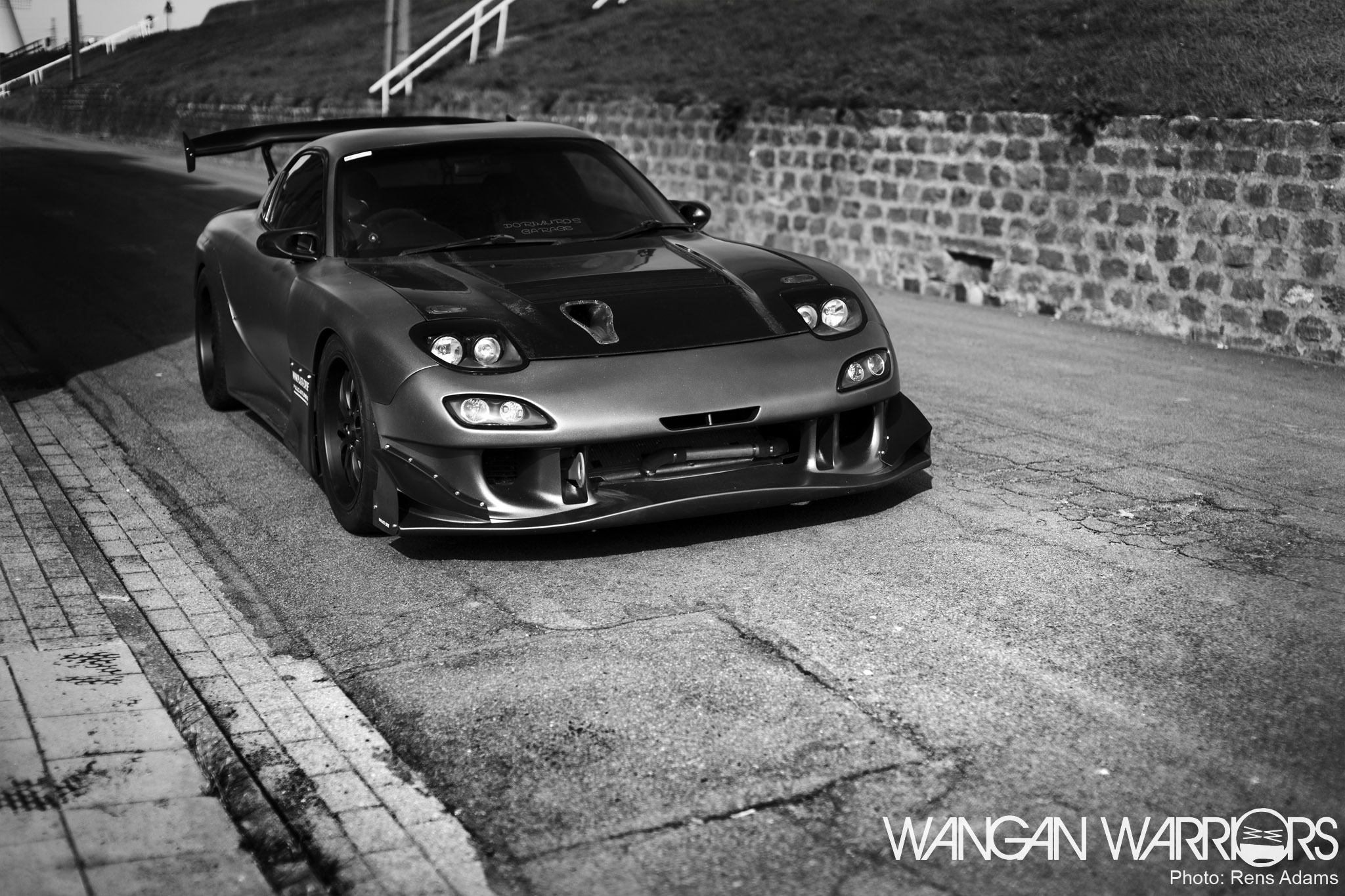 He didn’t want to get out of the car after the test drive and he just was destined to buy the Mazda even though he didn’t have the cash for it. Since the car was being auctioned on Ebay, he wasn’t even certain that he would win the bidding. Fortunately during the last few minutes of the auction, Murat won and he could make a fresh start with a new project. 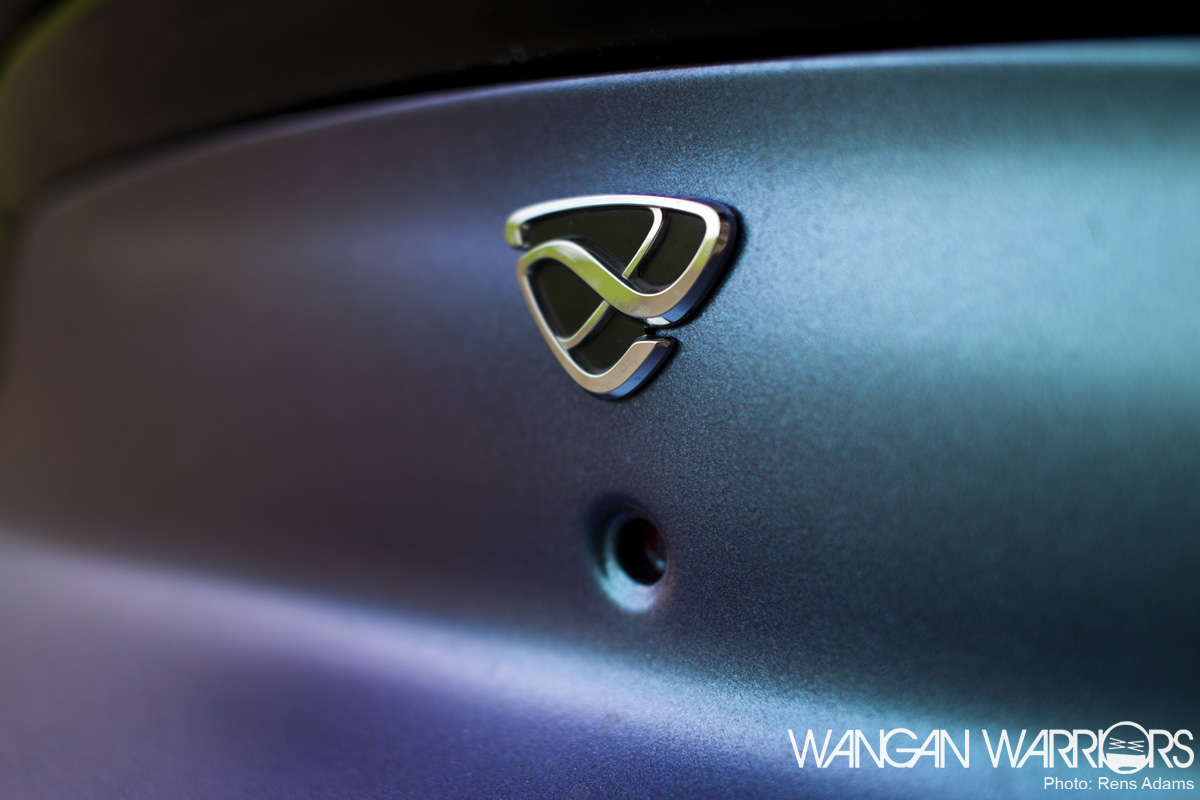 Murat was a serious guy from the get-go of this project. The car stood still for over two years and after the first few meets the engine broke down, which he had expected to happen. Murat got the engine revised and rebuilt by Kees Hoebeke of rxgarage.nl. Murat had his mind set on making the RX7 have a clean stanced look and collected all the parts needed for that. 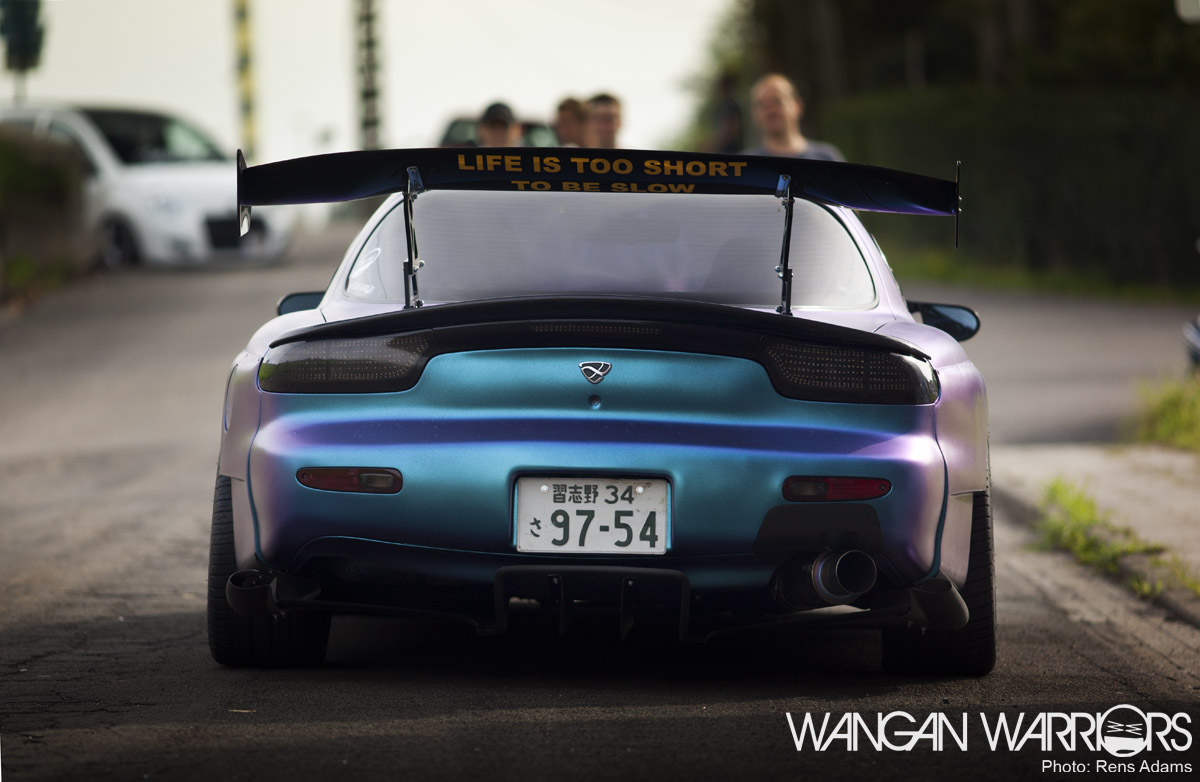 At the beginning of this year he could start rebuilding the car and start with the event season. After a couple of shows and meets he wanted to compete in the sprint sessions at Race Wars but still needed a mapping session for some fine-tuning. It turned out that the turbo gasket leaked and also the exhaust manifold had some cracks and a couple of other sudden issues. At this point his plans fell into pieces and he decided to take the car in another direction than he initially wanted. 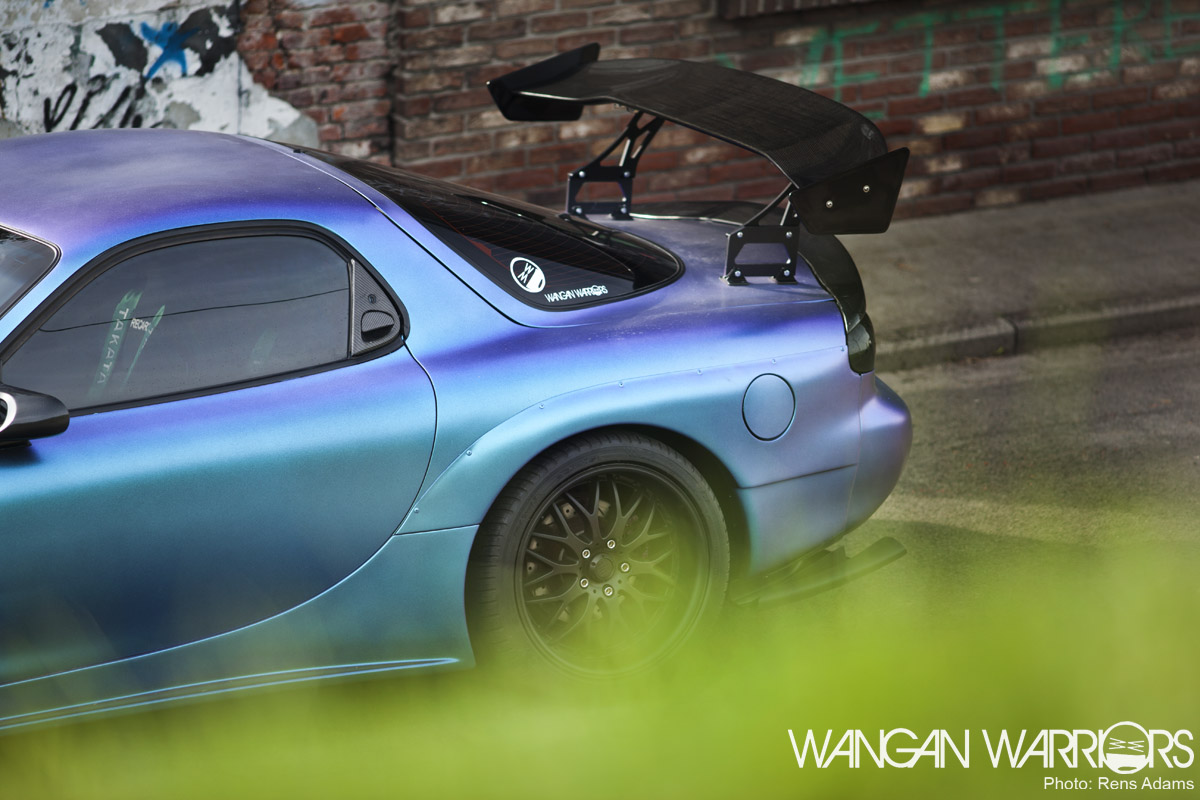 Murat started collecting the parts he needed to take the project in a new direction. He wanted more function and a track look for the FD. With this new direction he could also make good use of the performance and he knew this wasn’t going to be done in just a months time. 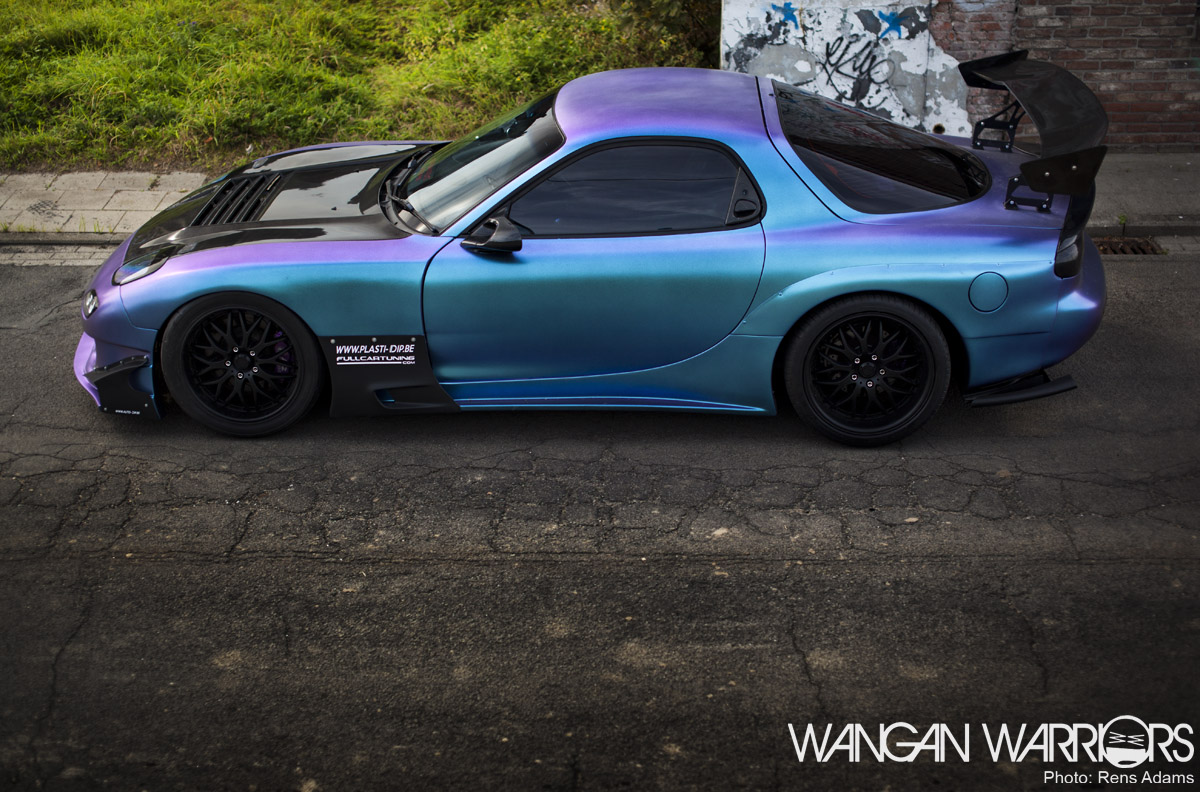 The choice fell on the Re-Amemiya Bodykit which is in my opinion one of the best options to make a RX7FD stand out more than the original design. Murat showed me a couple of colour options before the car would be dipped, and for some reason I thought he was looking for approval from me which of course isn’t necessary. I did, however, greatly appreciate that he kept me up to date with all the progress. 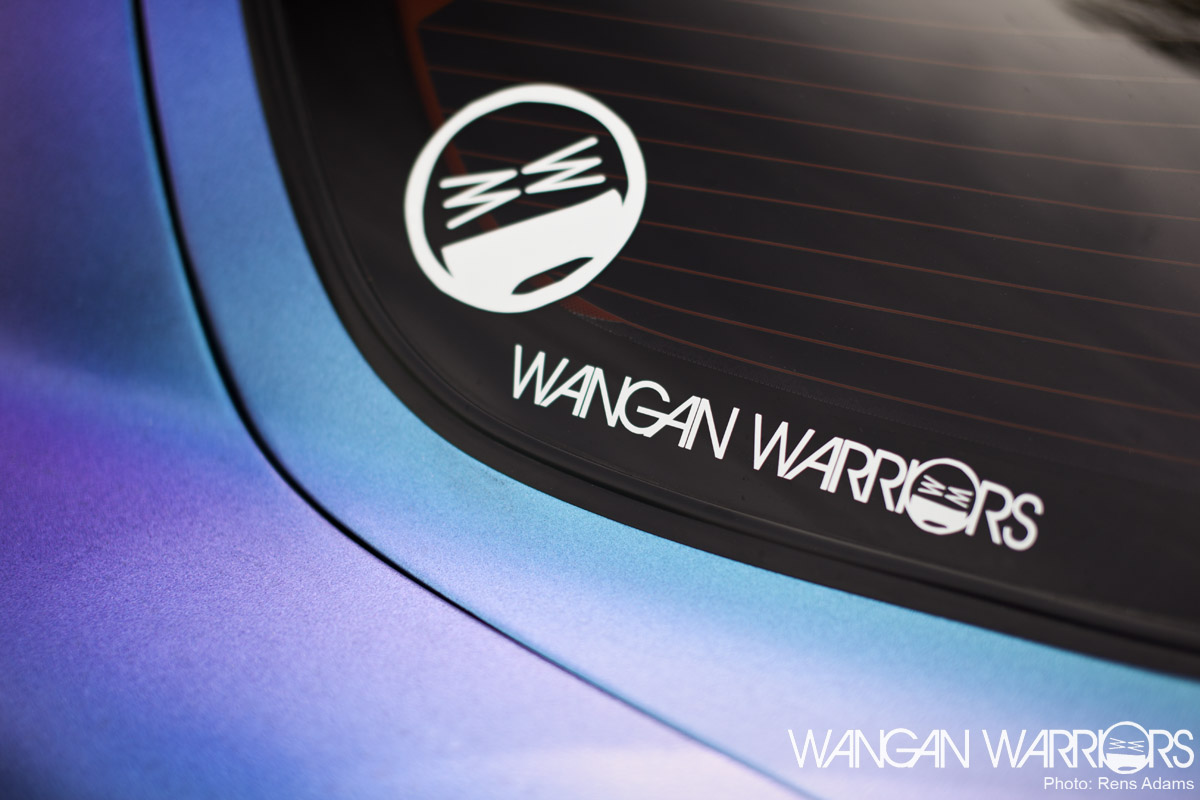 The colour Alien gc-47 was picked for the RX7 and in all fairness is a very dareing decision. I can’t recall seing many cars I fancy with this sort of paintjob and the main reason for it was that the paintjob was a trick to make the car stand out, so for me that colour became stereotyped to attention-seekers. In this case, many other details of the car stand out before the colour and I like the fact that this choice of plastidip is just a extra dimension of the exterior and was never the main feature to show with. The complete job was done by the people of plasti-dip.be. 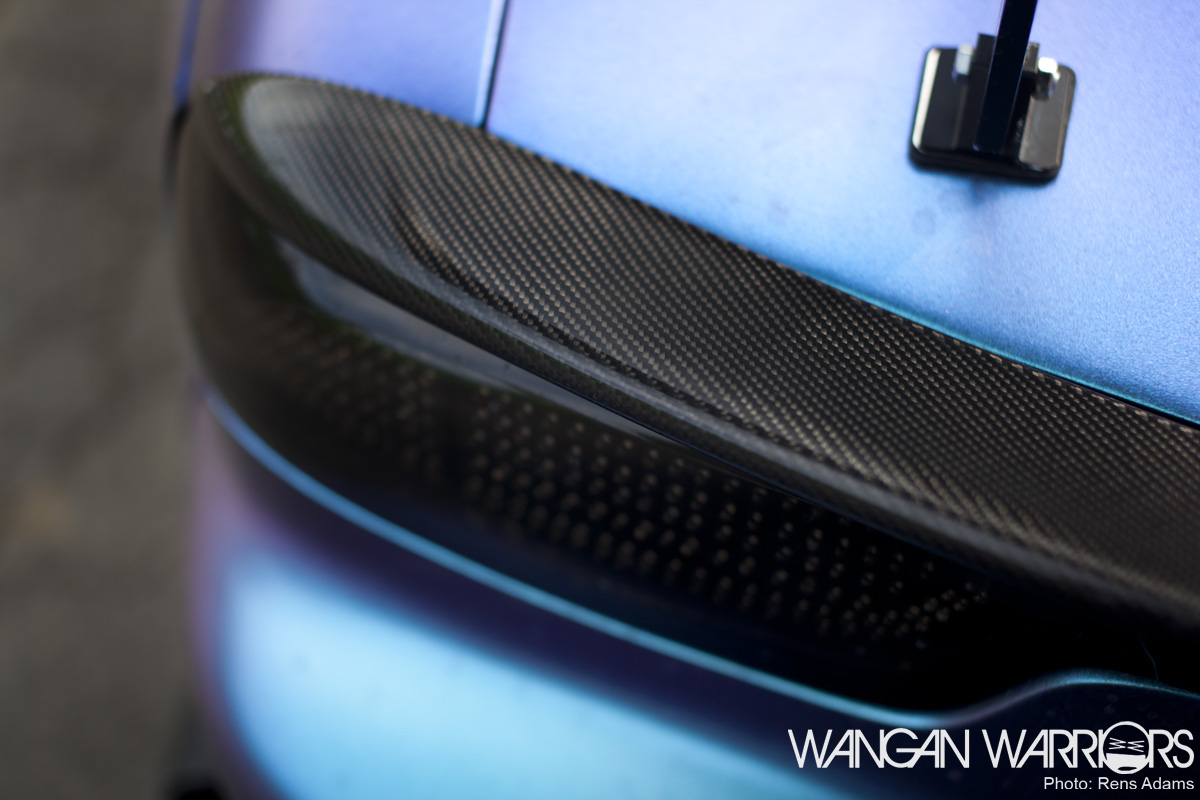 The many characteristic details of the car are hard to deny and Murat shows us that there is absolutely no lack of carbon parts on the Mazda. Even though he reminded me several times that this project isn’t done yet, I already think there is a magnificent attention to detail. That’s proven by parts like the carbon rear lip spoiler. 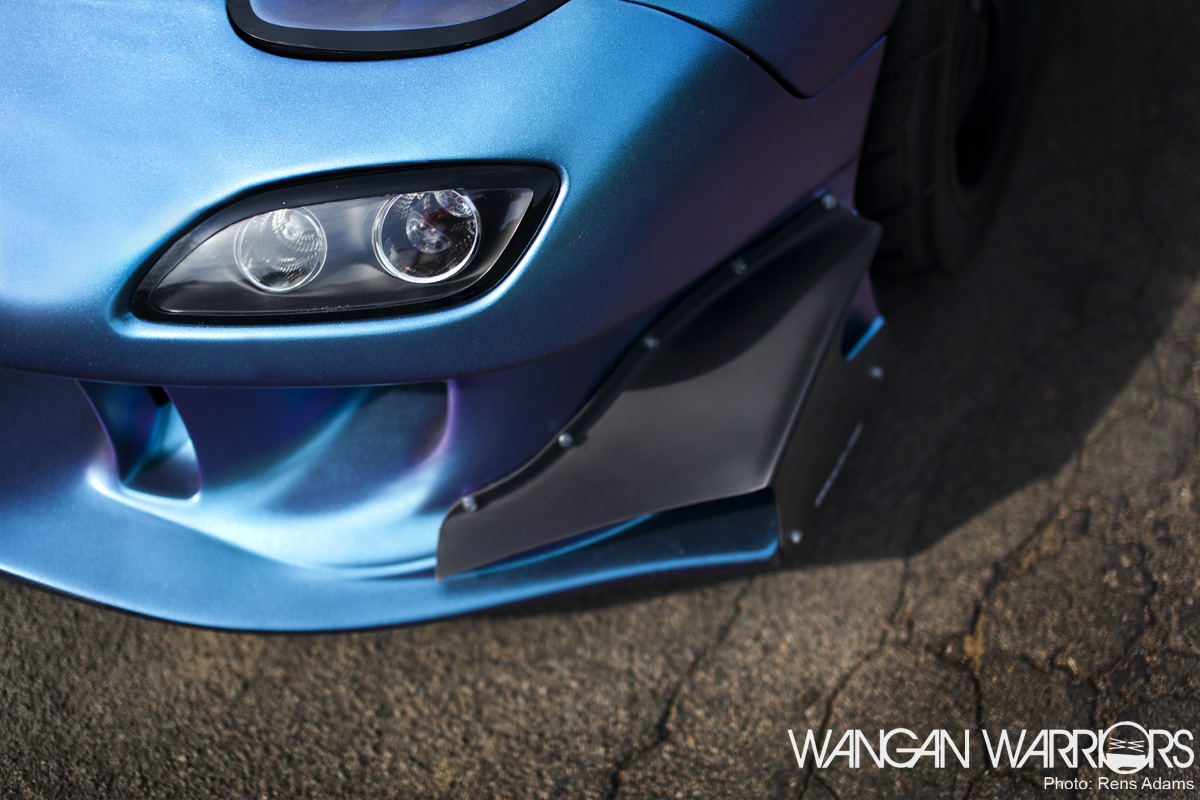 I see with most projects that these details are the latest additions when people are building up a car. The engine of the RX isn’t even running with the proper mapping but the bodywork is already done and aerodynamic parts are in place, so as soon as the engine is mapped this beast is ready to be unleashed. 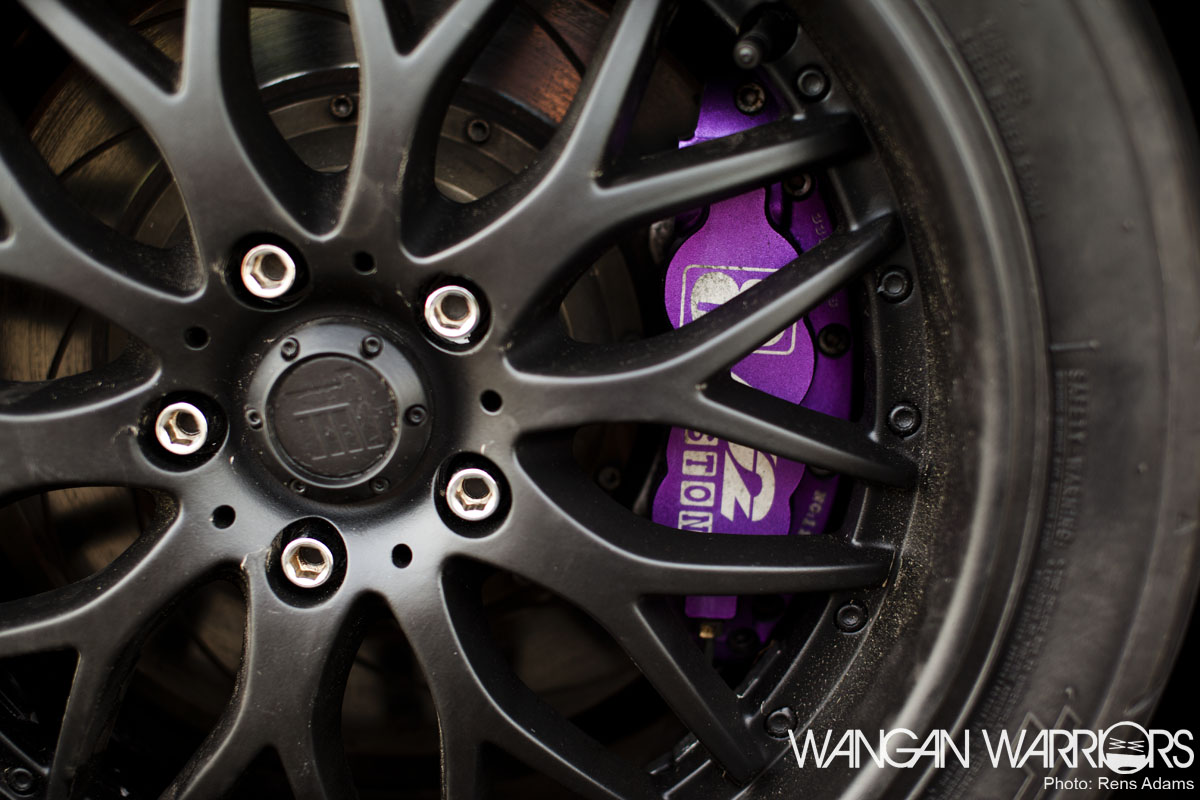 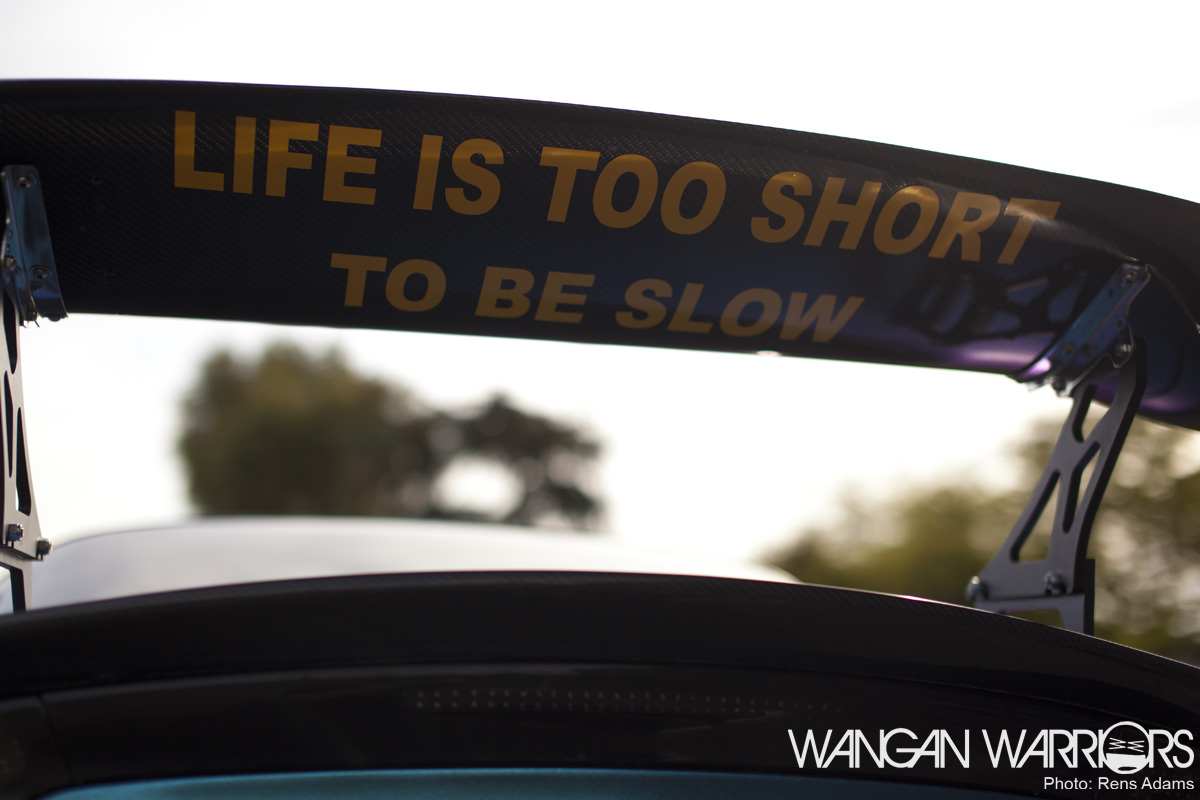 From the stance idea and plans Murat took the leap of faith to the track look and with that belongs a big wing, right? The Carbon Driftworks spoiler was raised a bit higher with other brackets and states a phrase that any proper gearhead could preach. 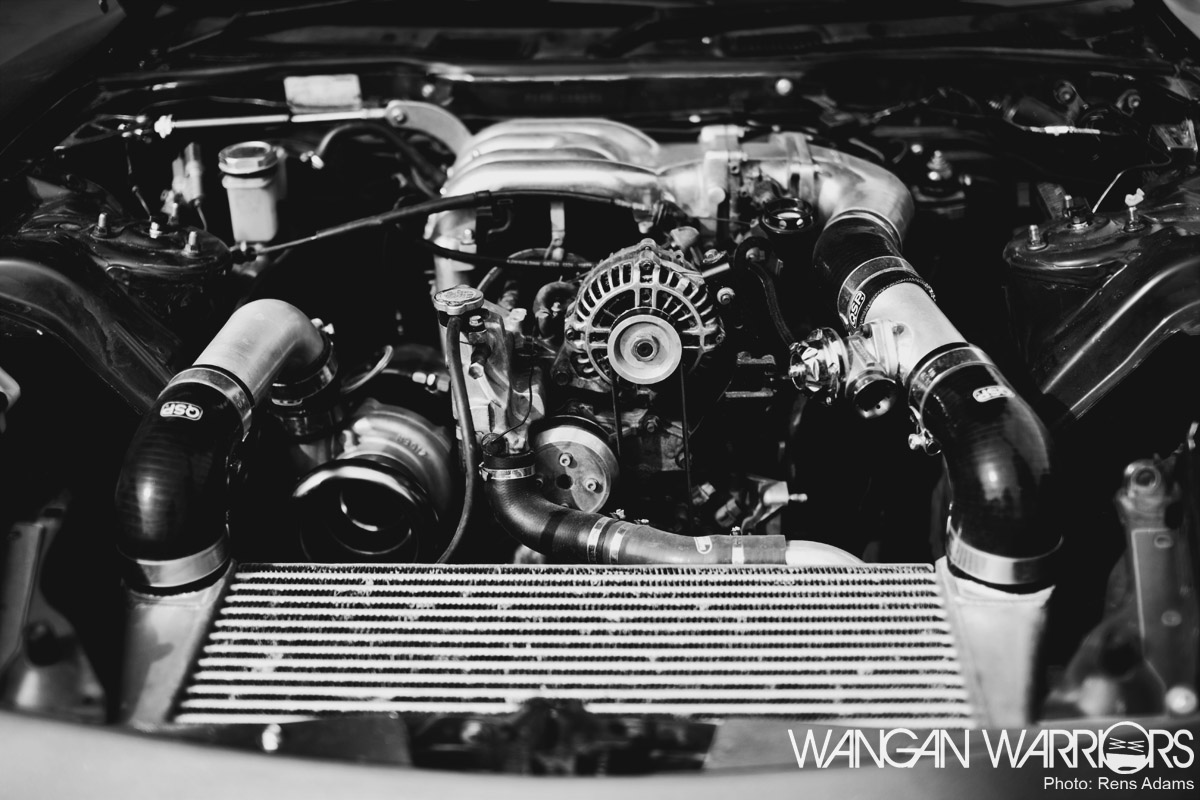 The engine bay is one part of the car that’s still in process. Murat reveiled some amazing plans to me but you’re going to wait for that until we see Murat at one of our meets again! He went for a Greddy V-mount set up and another main feature is the Masterpower T64 turbo. 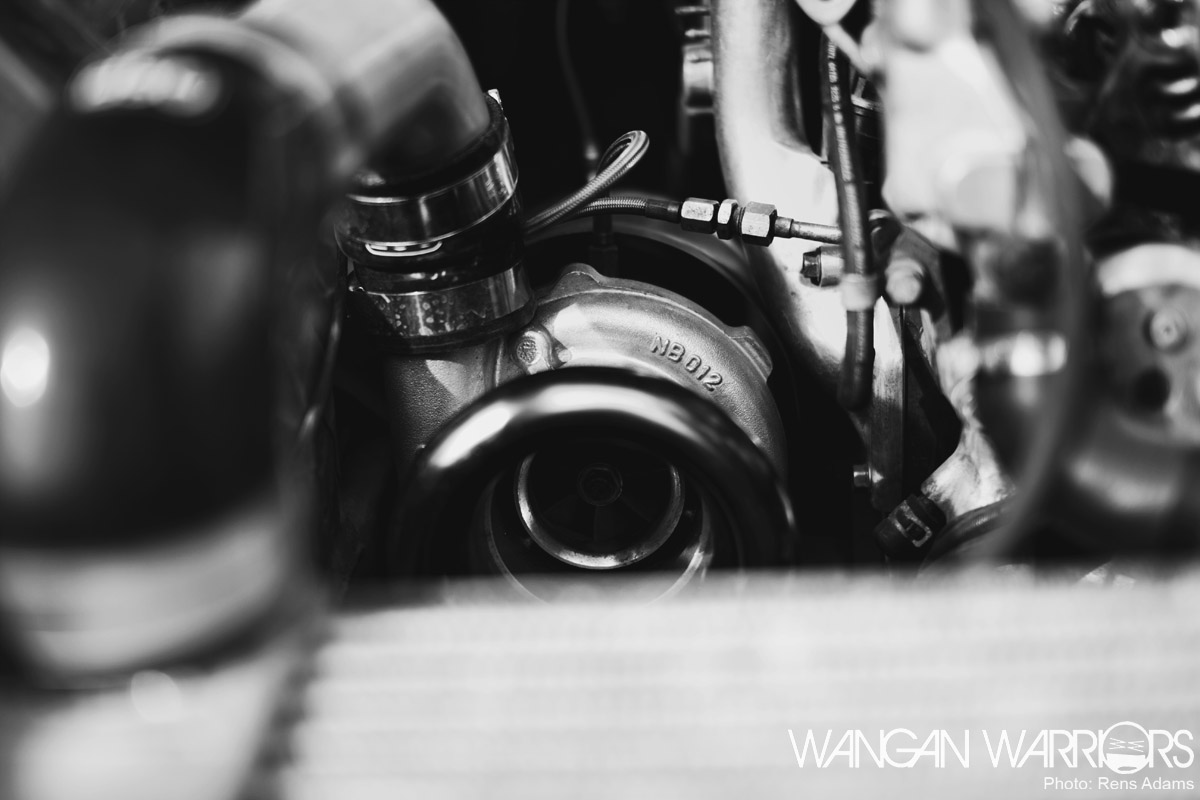 I can only say that seriously I can’t wait for a ride along when the engine is mapped and other set ups are completed. I hope Murat will make a name for himself with a piece of art like this. In fact, I’m sure he will! 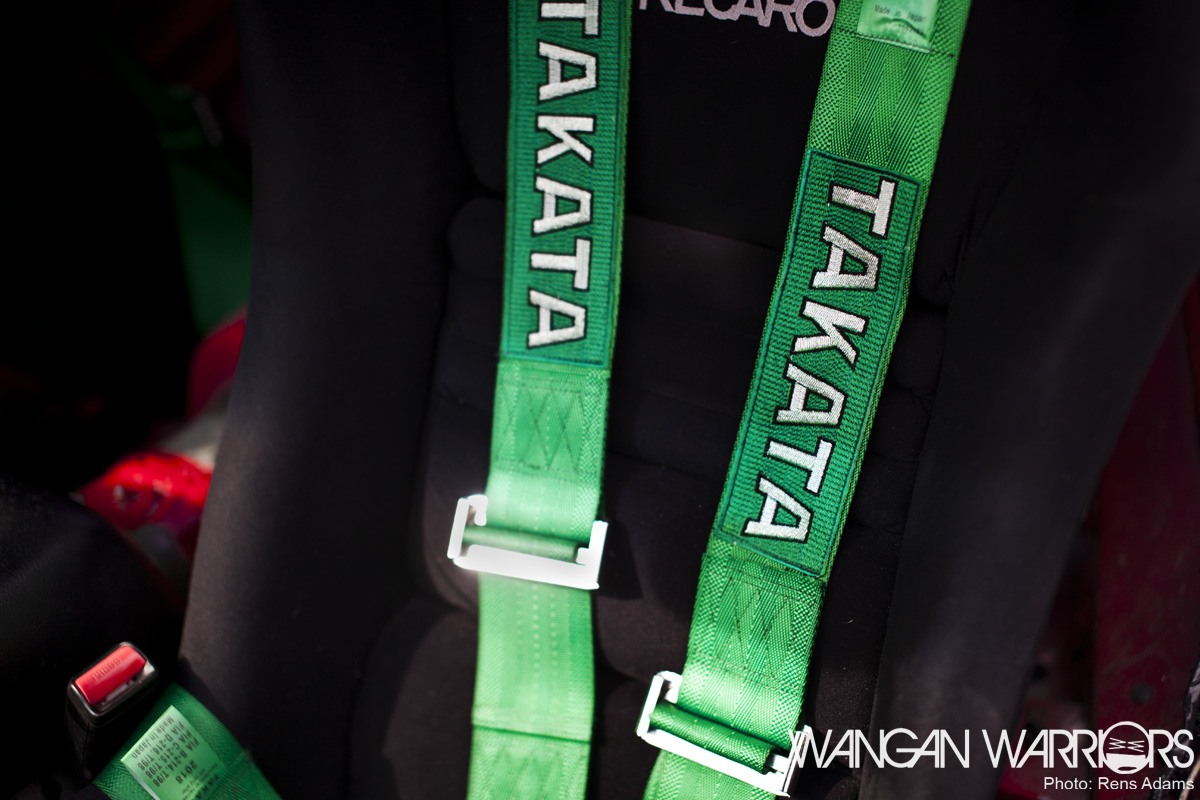 Murat made some sort of apology when I took a look at the interior as if it wasn’t photo ready. The easy thing for me would be to ignore the interior completely but there is no shame in having a project in progress. It shows that the Mazda is being built and it isn’t bought just to showcase it. 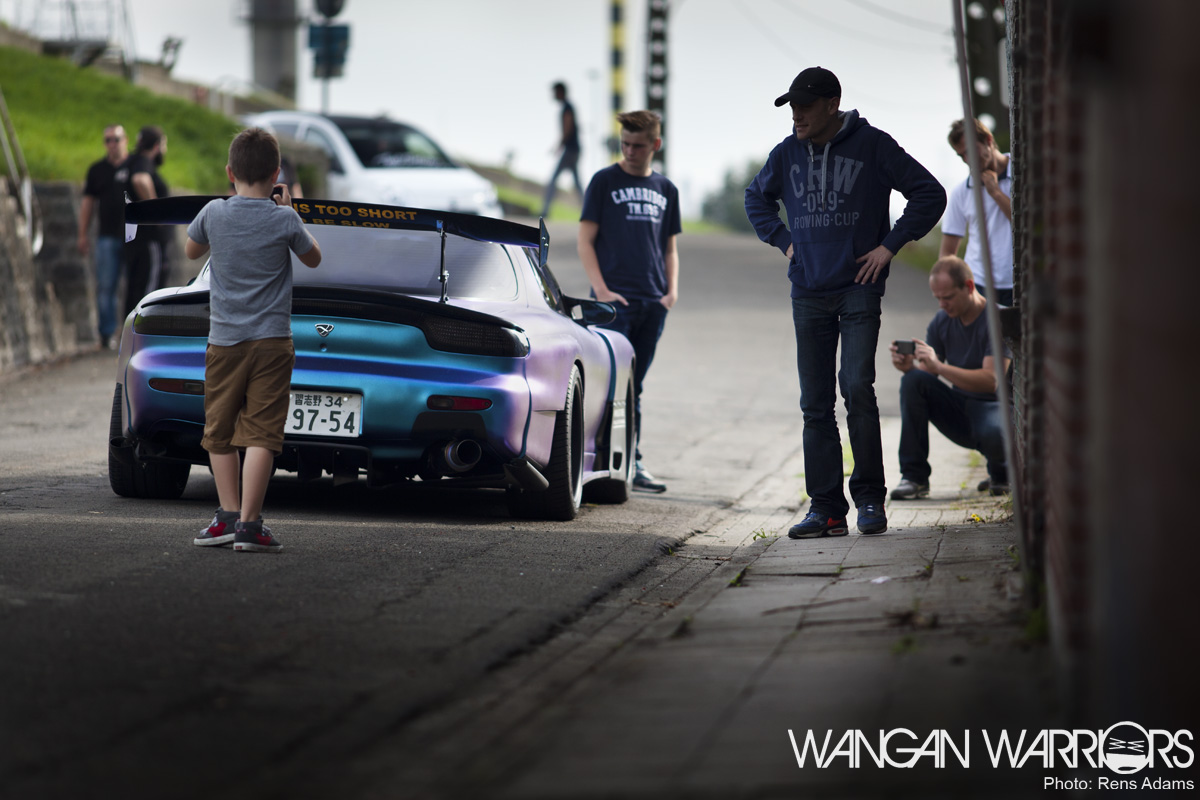 The thing about the RX also is that it attracts so much attention and at a busy event like DMPD Finest there is no way to go around it. Many people just drove by while I was shooting the car and would basically compliment Murat with the car. Isn’t that the main thing we’re doing what we do? Just a little recognition? 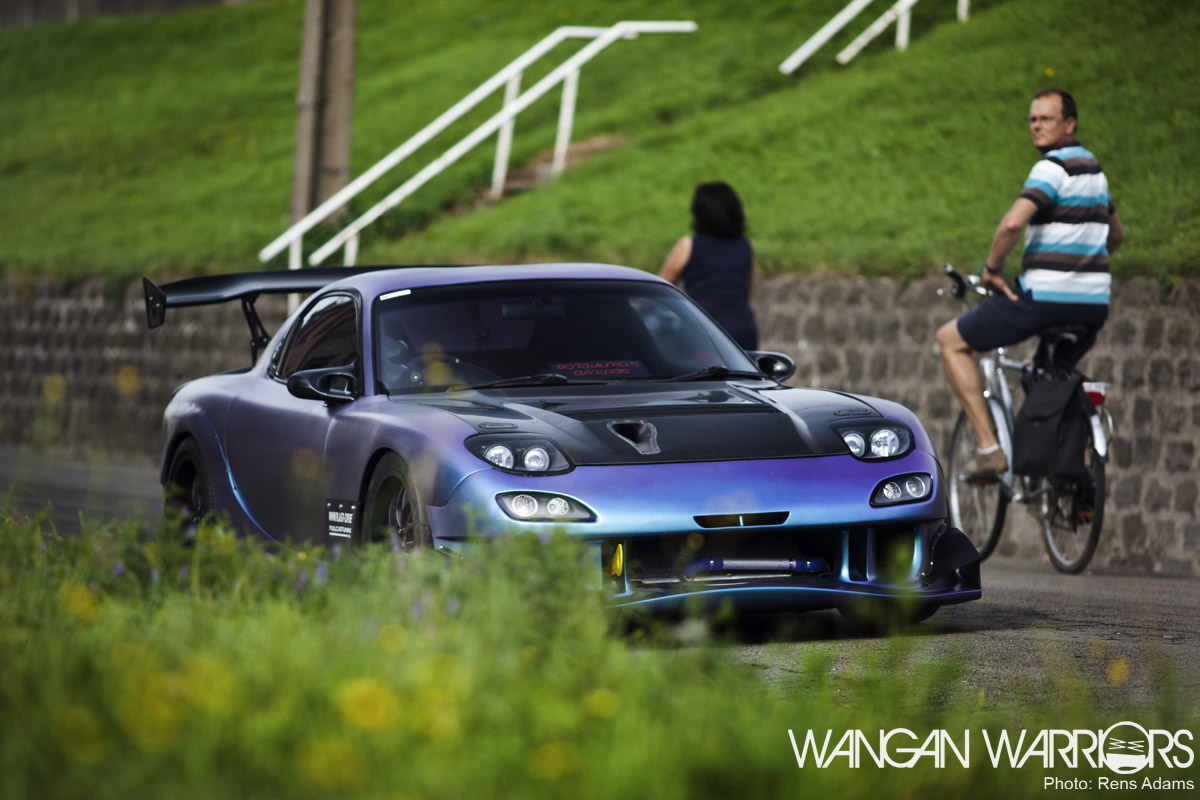 There is nothing more pathetic than asking or forcing credit for something cool, whether it be a great car build, a nice set of photos, an in depth story you’ve written or something else you’ve created yourself. I think the compliments always have to come to you instead of seeking for it to make yourself feel better. Making numerous heads turn in the streets is for sure the best way of getting that recognition and credit and this project does just that. 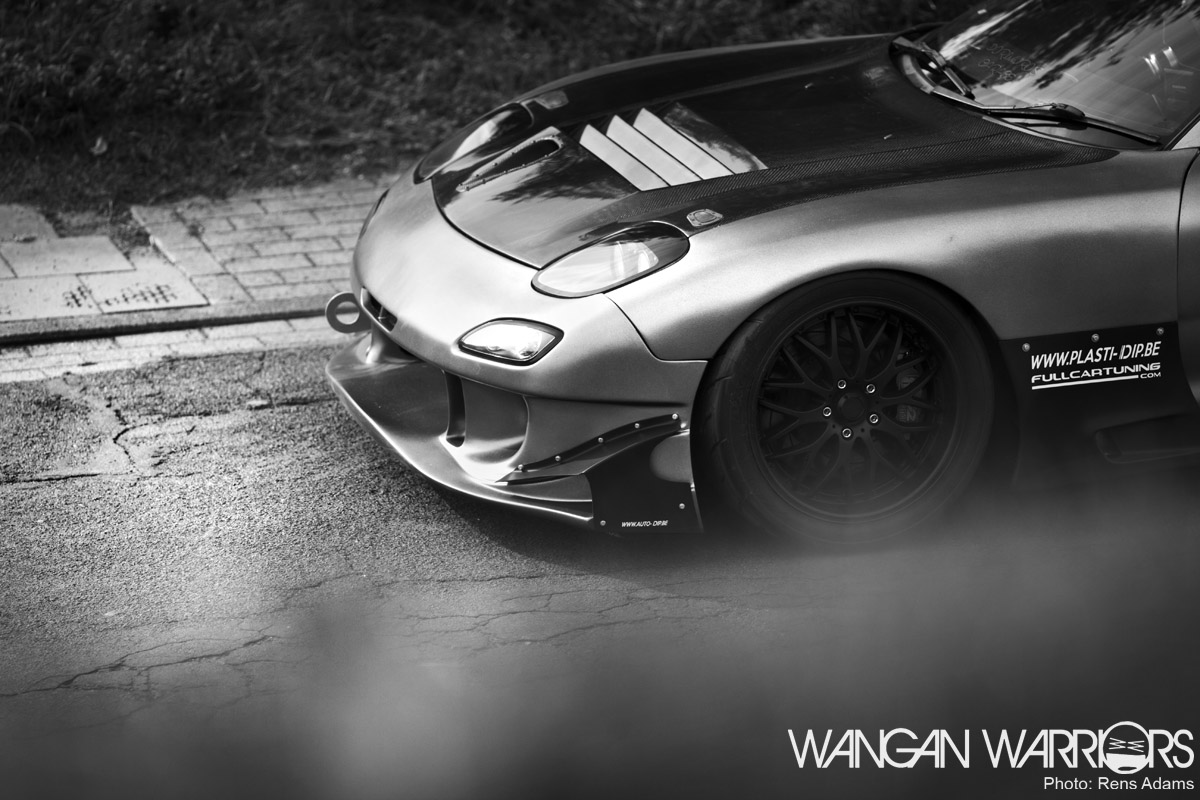 Murat is a humble guy, almost too humble but I think that such a character can make or break how people look at your project. He never forced the attention that he or his project gets and that’s very important. He was simply kind enough to let me know how the project evolved during these past months because I asked him about it. 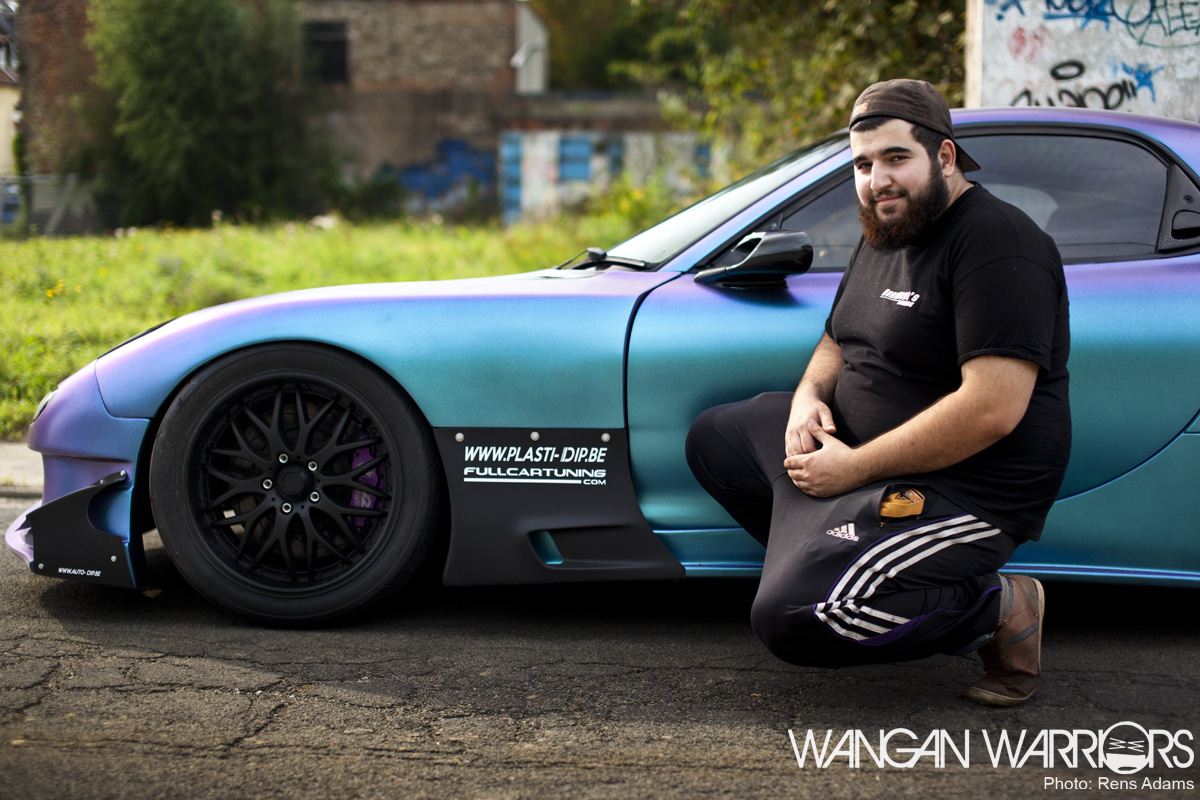 Thank you Murat for showing up at DMPD Finest and allow us to tell another story of a car enthusiast. It’s stories like this that keep me motivated as well and I always discover new things while I’m working on these reports. We hope you appreciate the photos and we absolutely hope to welcome you at one of our WNGN events in the future. Keep it up!