If there’s one area in the world that I love, it’s the German Eifel, home to the famous Nürburgring. With its lovely hills and abundance of trees, it’s almost an exact opposite to the city that I call home, which is Rotterdam in the Netherlands. Once again I would return to motorsport heaven to capture one of the most spectaculair motorsports out there: drifting! 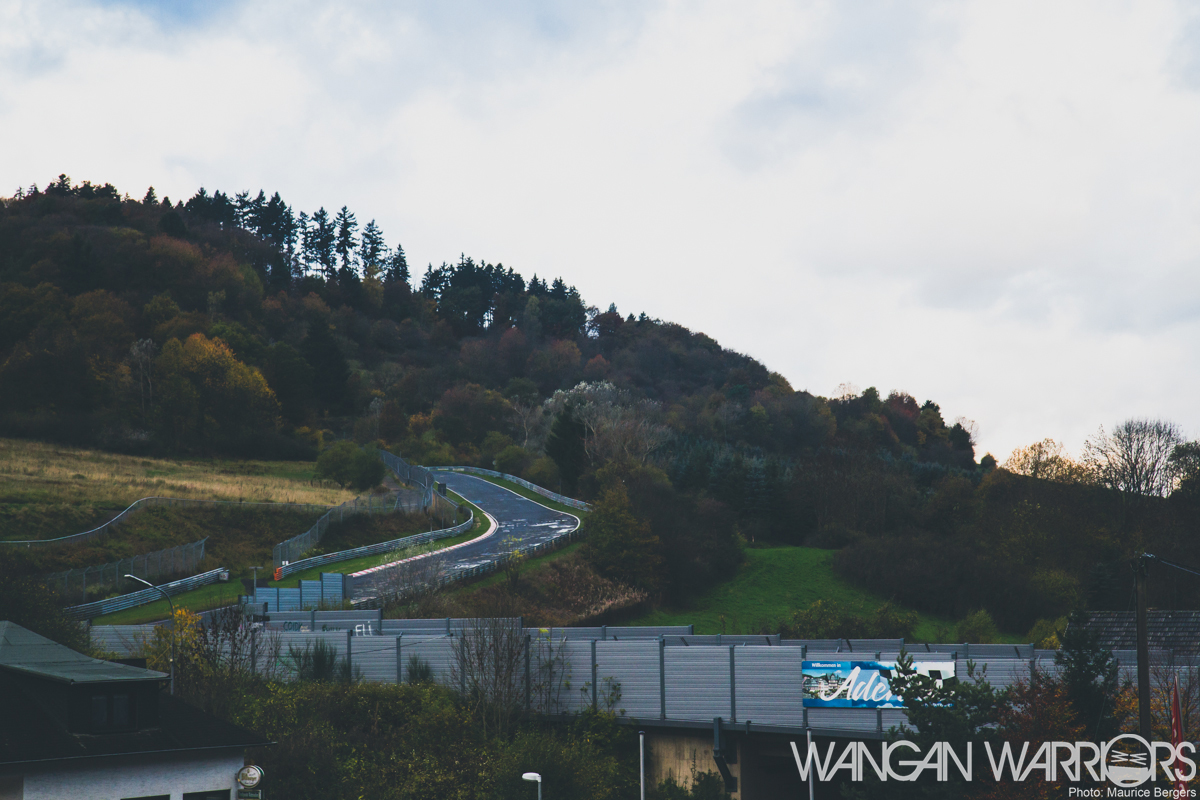 After getting the confirmation of the media accreditation, a fellow photographer and I decided to find ourselves a decent but cheap hotel. I knew it would be next to the Ring, but waking up to a view like this, was something neither of us expected. 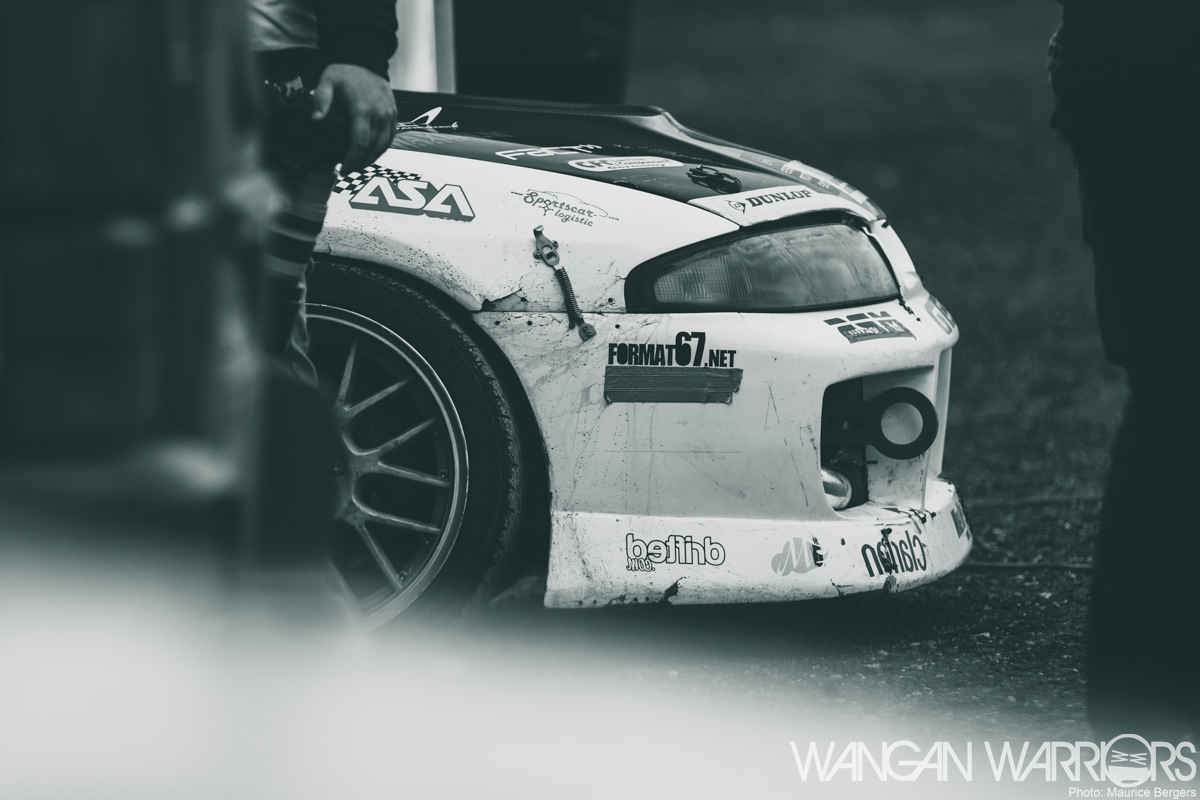 The Nürburgring Drift Cup, a combined effort of both the Nürburgring and Skylimit Events, would be my first ever international drifting event. I really didn’t know what to expect, as I was used to the smaller scale of the Dutch drifting competition. 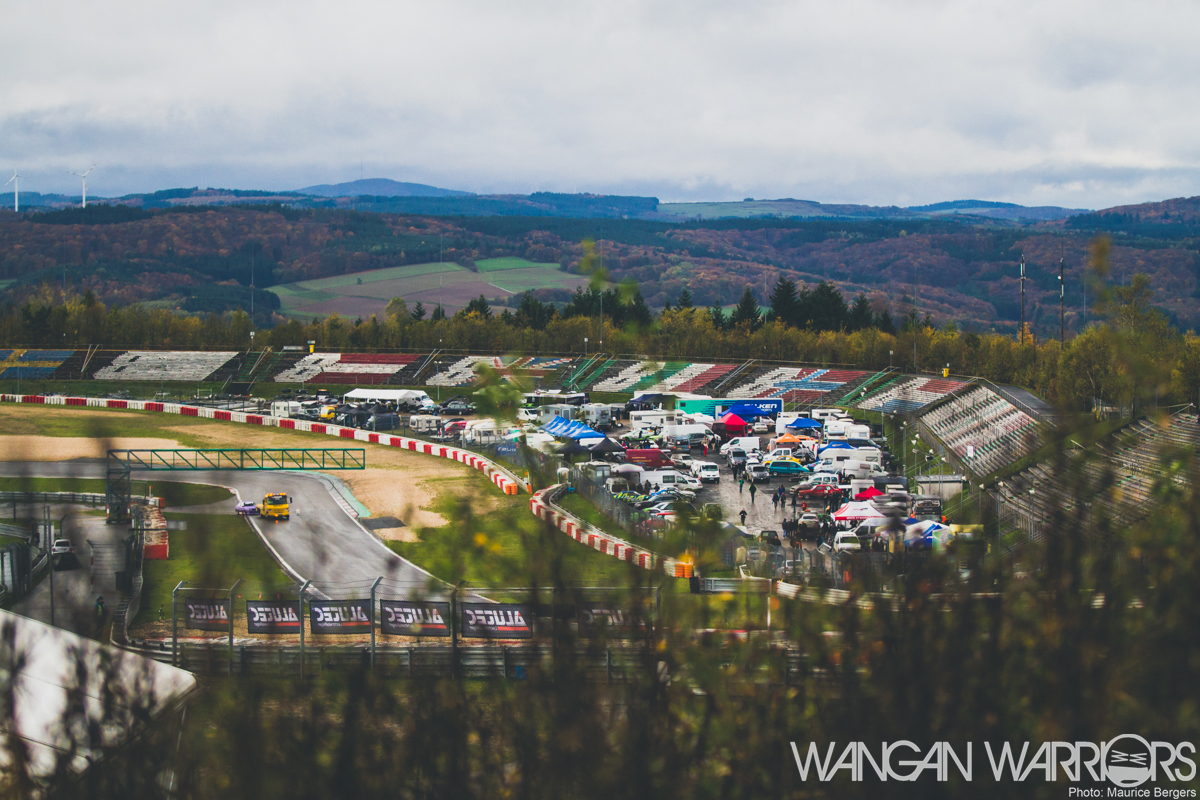 The paddock was absolutely filled to the brim with well over 80 drivers from all over Europe, including some of the best Europe has to offer. This was going to be good, real good. 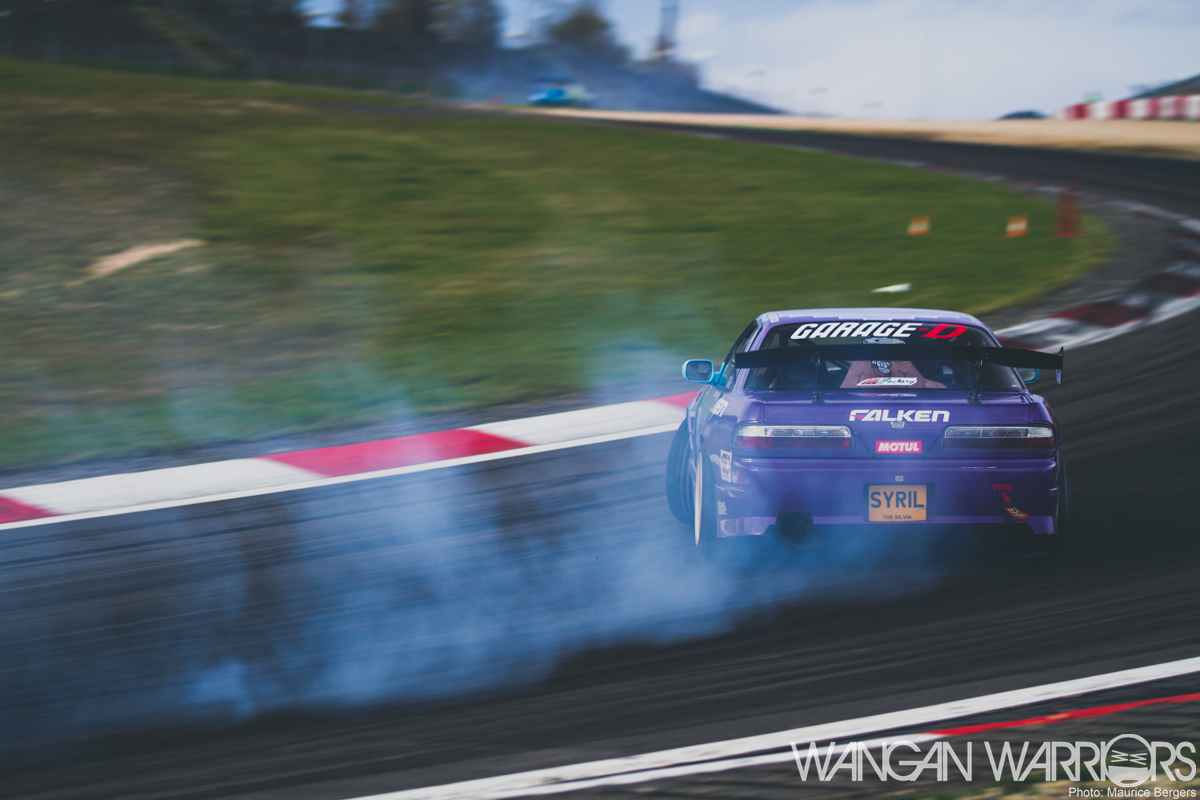 I really didn’t know where to look, while walking through the paddock for the first time! Some of the cars were already out on the track, and they were flying by at speeds at which I had never seen cars going sideways. 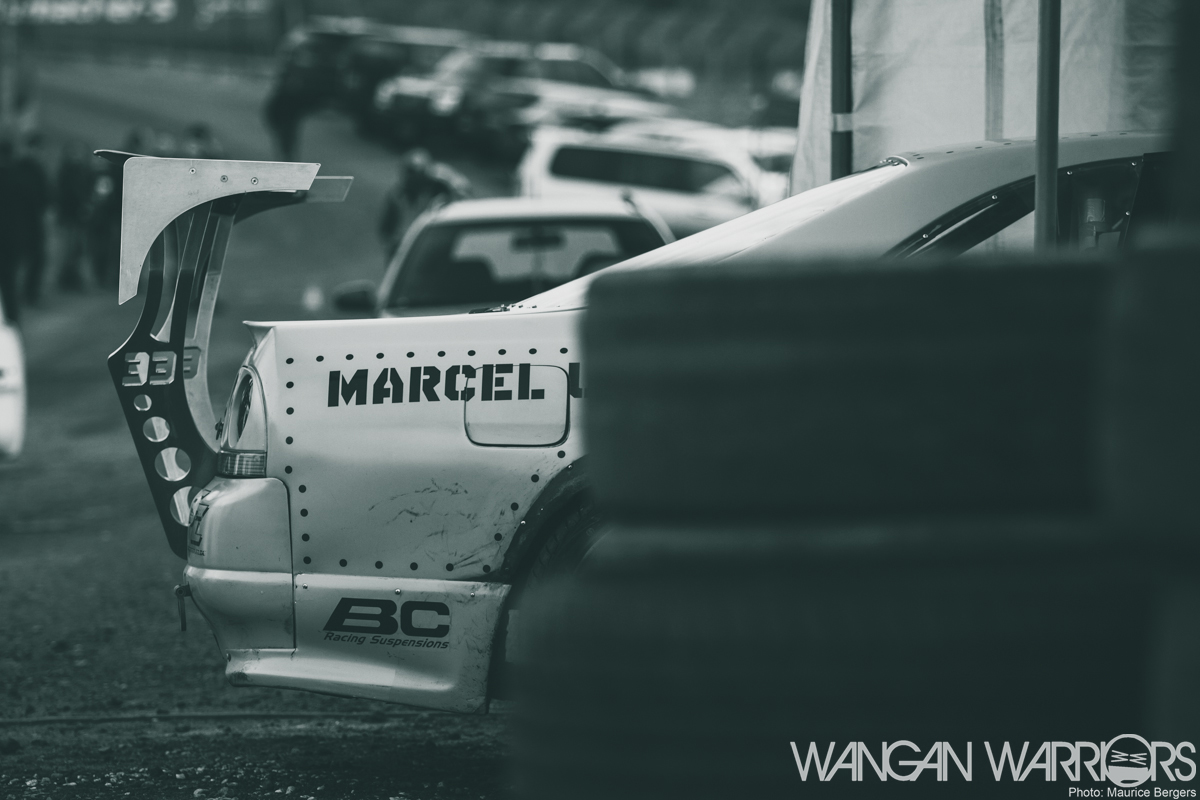 I was surrounded by all kinds of fantastic cars. I wish I could show you every single one of them. From Marcel Uhlig’s Skyline with its big custom wing… 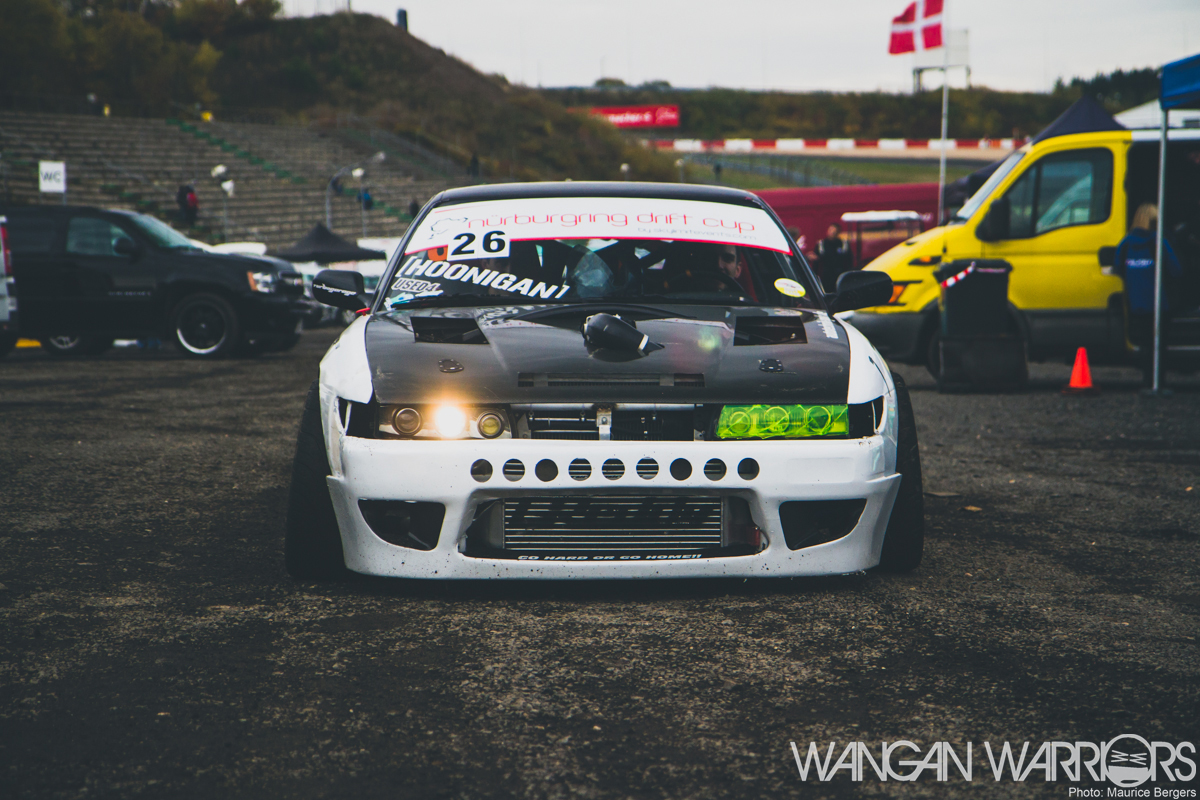 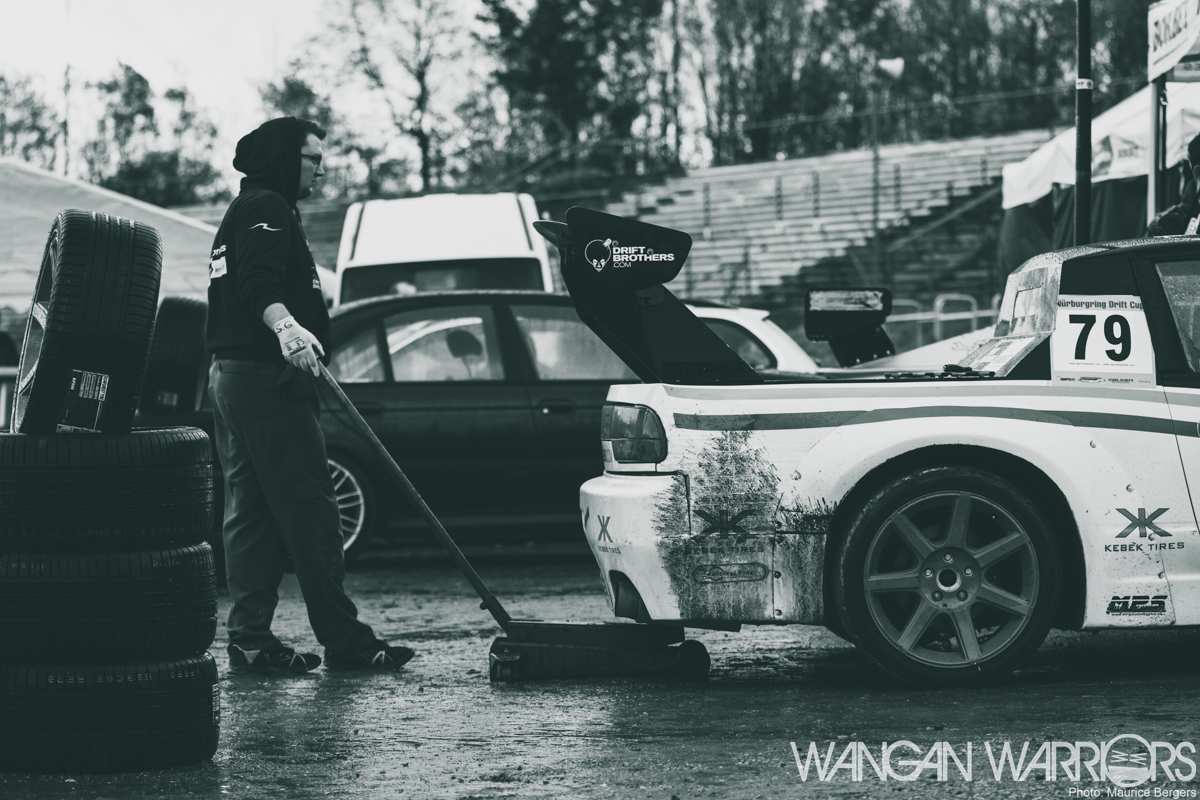 Another car that was hard to miss, was the RS13 pick-up of Team DriftBrothers, driven by Joe Hountondji. The powerplant in this car is an LS2, which made the car not only look, but also sound completely badass. 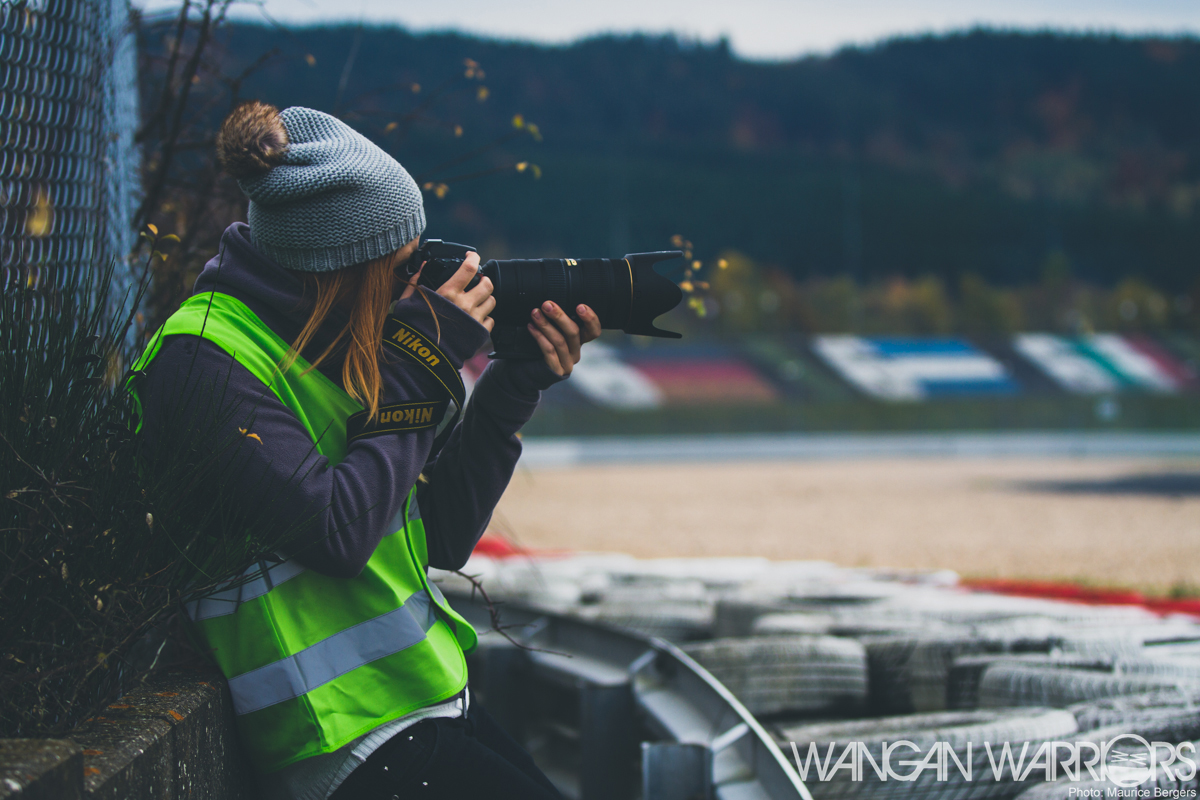 The first day was an entire day of practice. This allowed all the drivers to get a feel for the track and allow us photographers to find some nice spots as well. 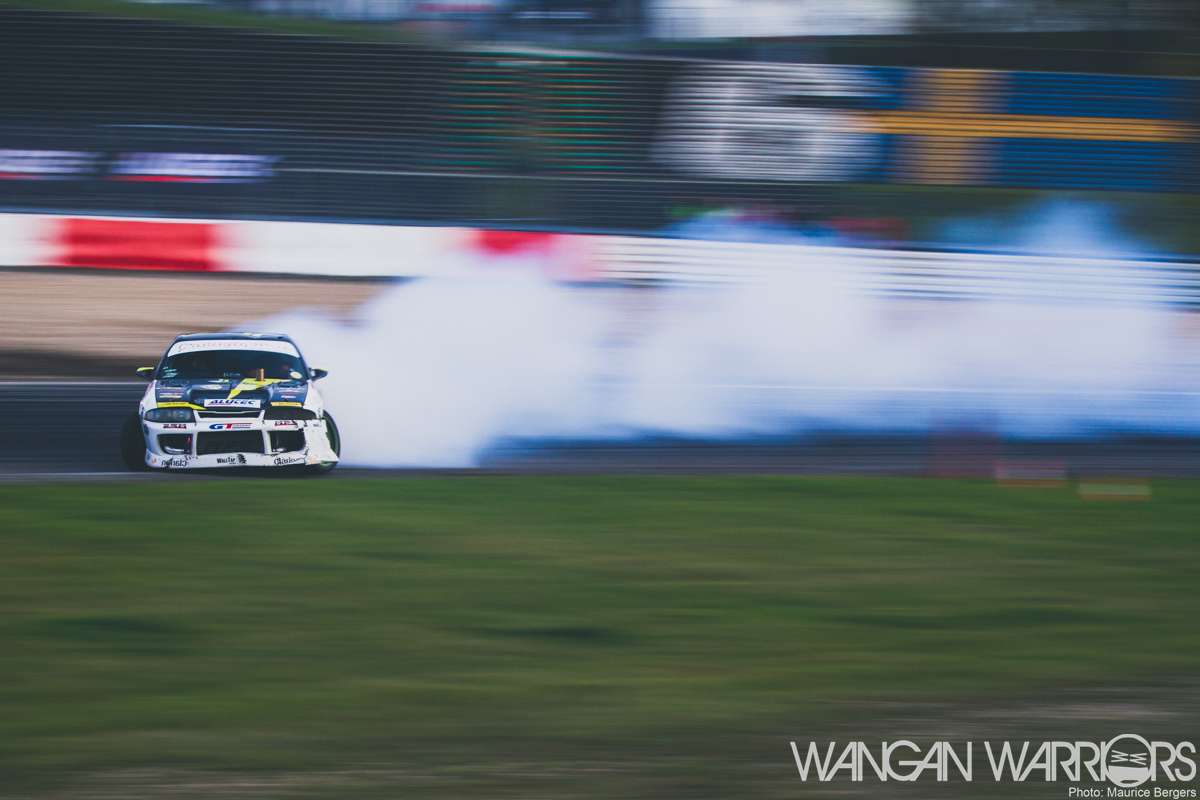 The part of the track that would be judged was quite challenging. It had a really fast first corner, the Schumacher S, where drivers would reach speeds of 160km/h mid-drift… 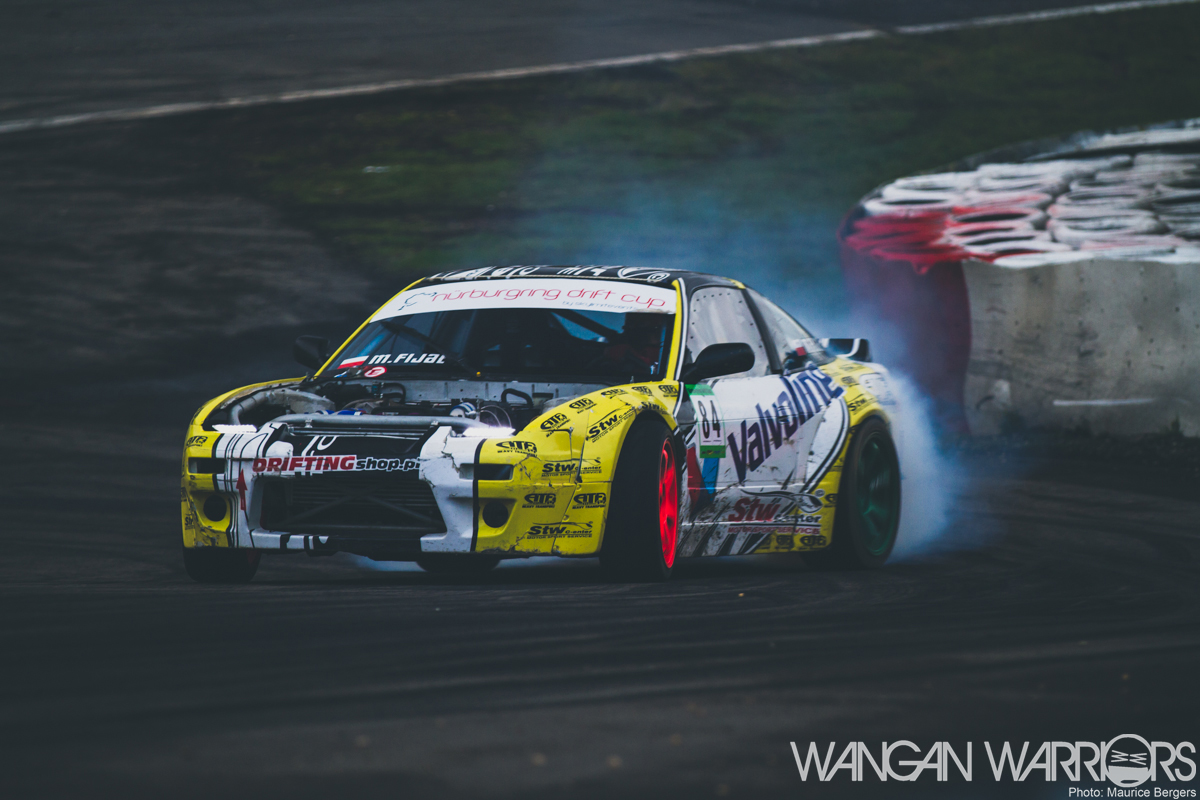 … followed by a more technical uphill section. Not only would the drivers have to transition from a very fast section to a slower one, they also had to deal with 2 types of asphalt with varying levels of grip. 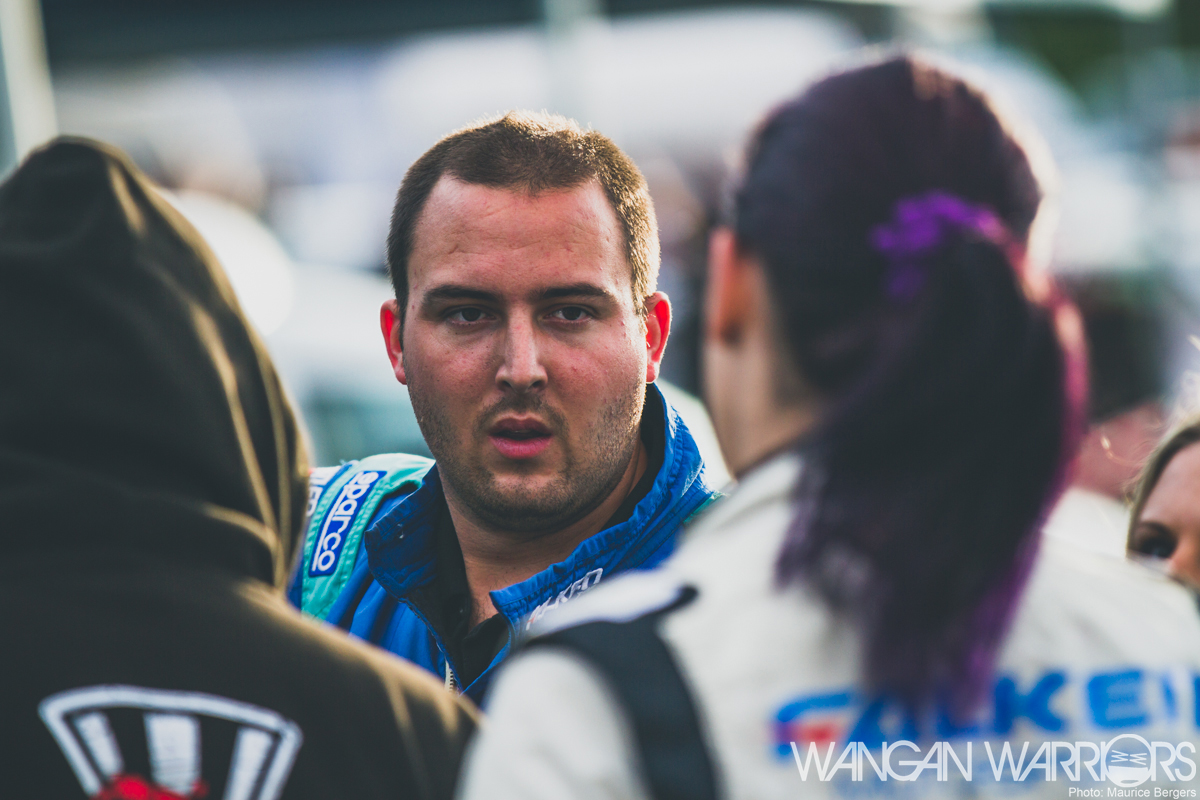 From day one the atmosphere in the paddock was great, and it was fun to meet a lot of new people. It might be a bit cheesy to say this, but in some way it felt like one big happy drifting family! 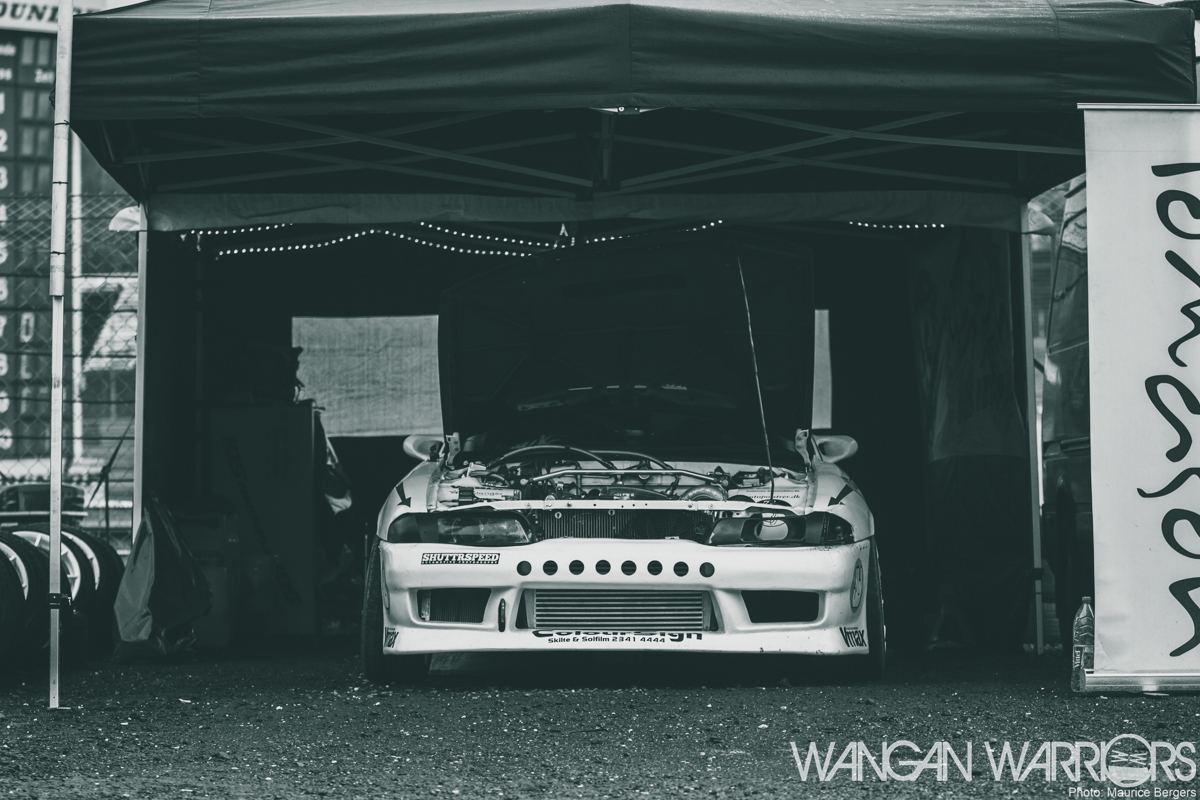 Onward to day two out of three. Aside from more practice time, the second day was also the day when drivers had to qualify to try and make it to the battles. Time to do a last minute check and make sure the car was running properly, before heading out onto the track. 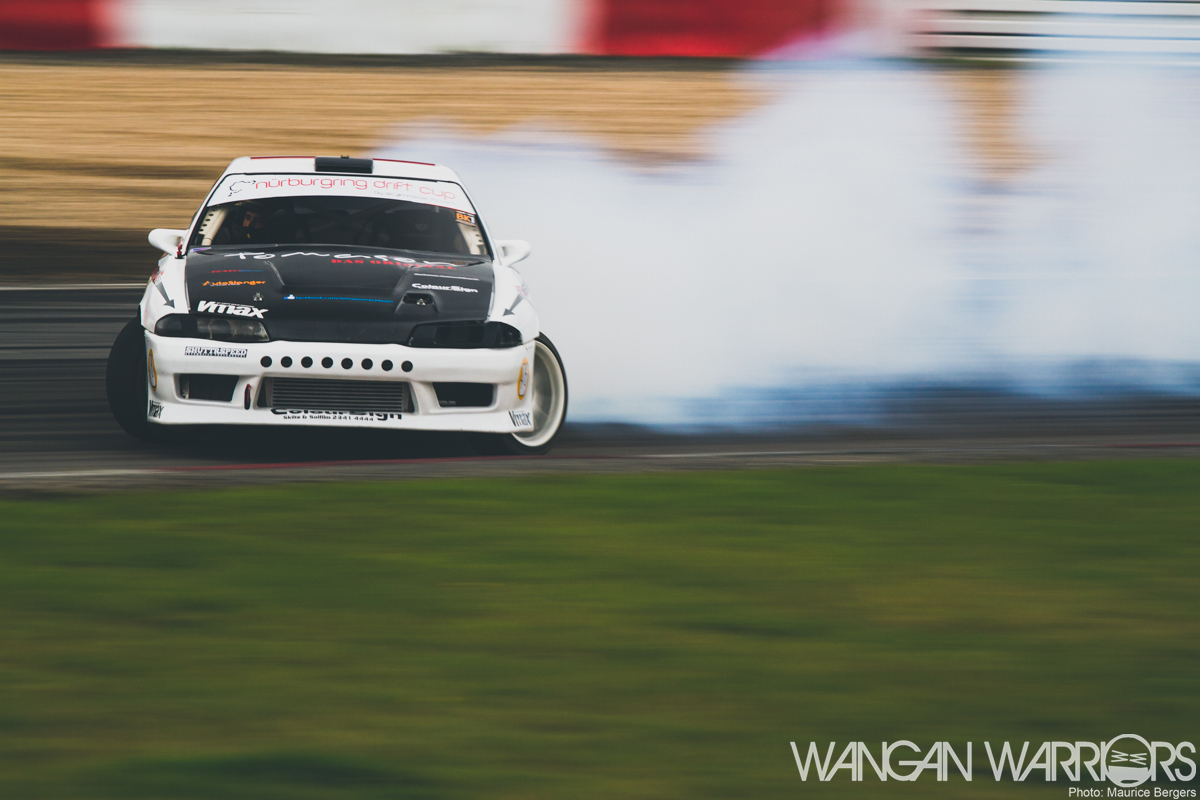 Everyone was pushing hard, as the level of competition was quite high. It also showed us some of the favourites for the next day, like Martin ‘Pyramiden’ Poorhamidi, who was really going all out to try and qualify as high as possible. 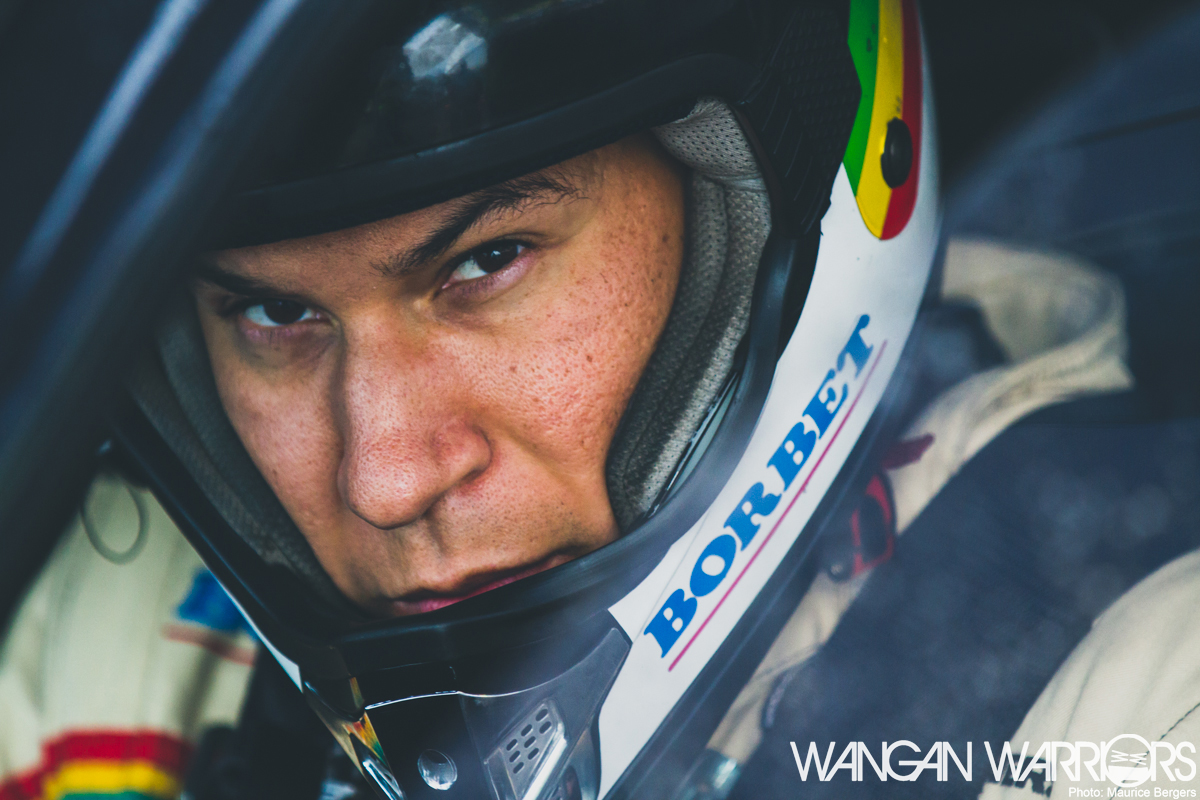 Basically everyone was gunning for a top spot. It was game on for Joe as well. And although this menacing look might tell you otherwise, he is in fact a really nice guy! 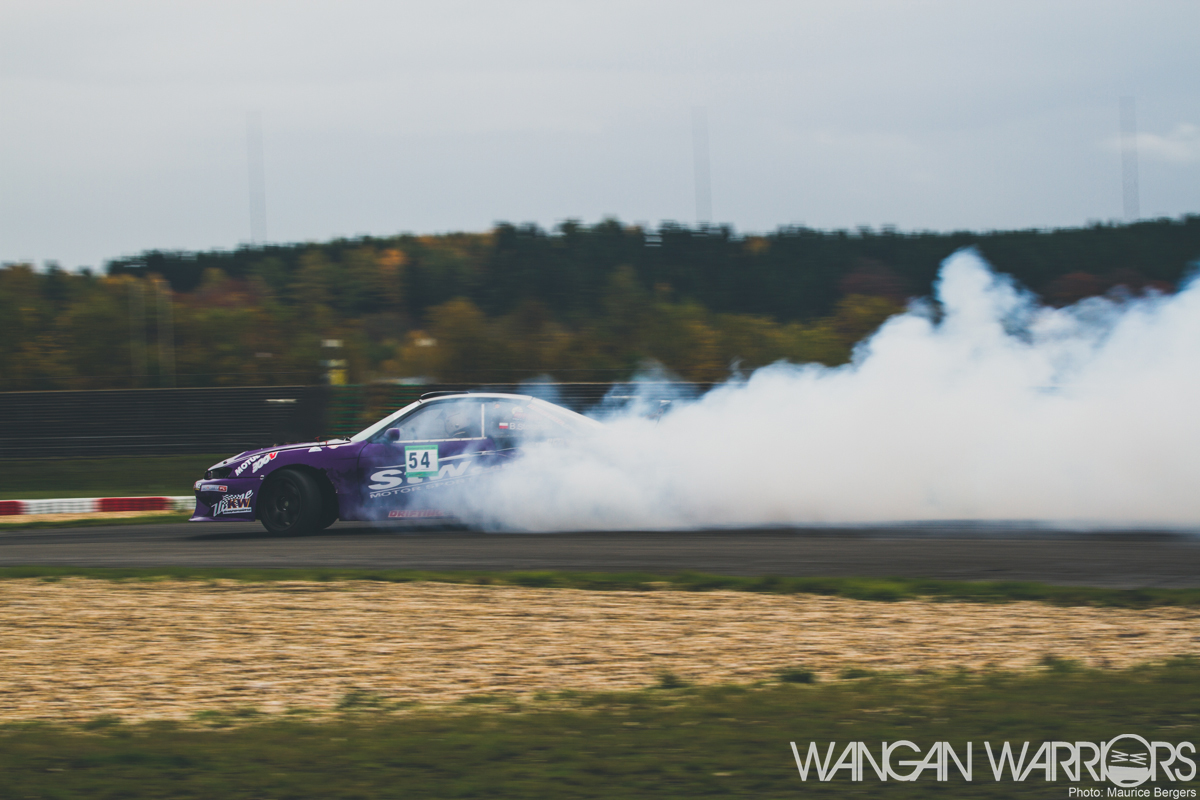 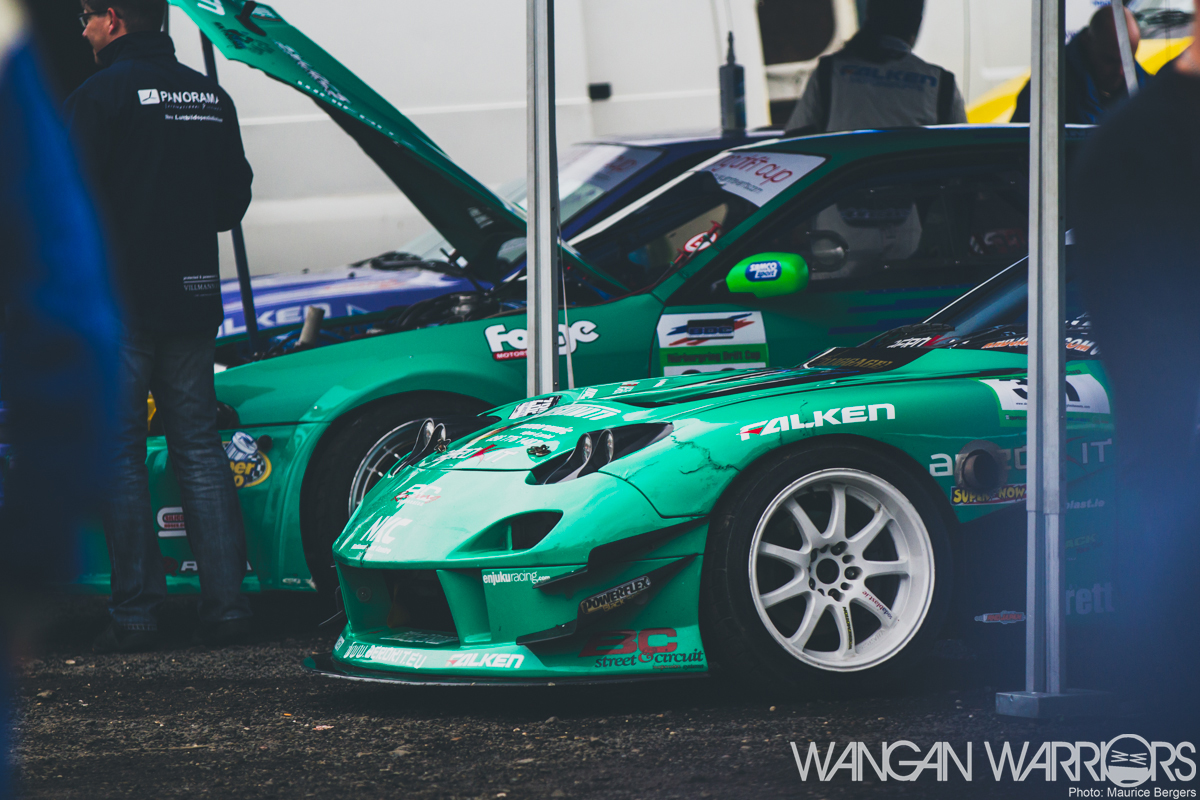 James Deane and his SR20 powered RX7 were also ready to battle it out and with a track record like James, he definitely was one of the top contenders for the podium. 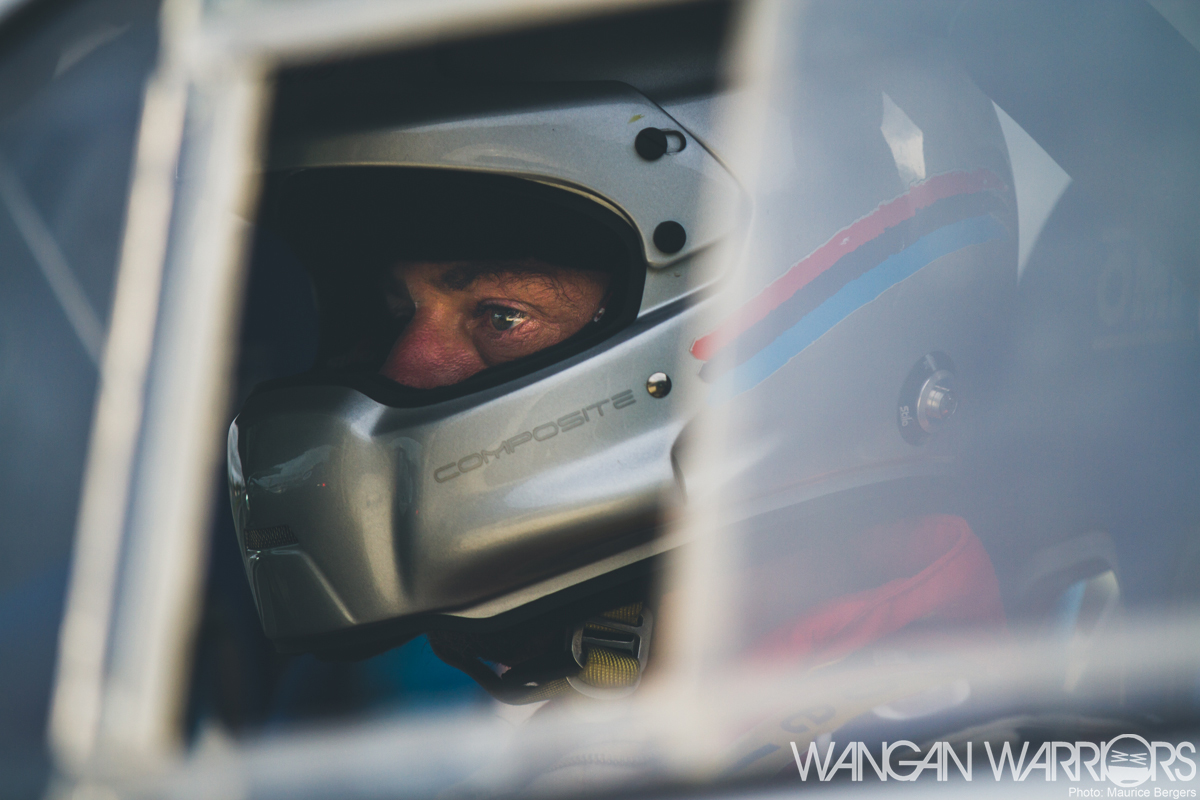 Day three, battles. Time to get down to business and get it done… No more fooling around, no more trips into the gravel, every run counts! 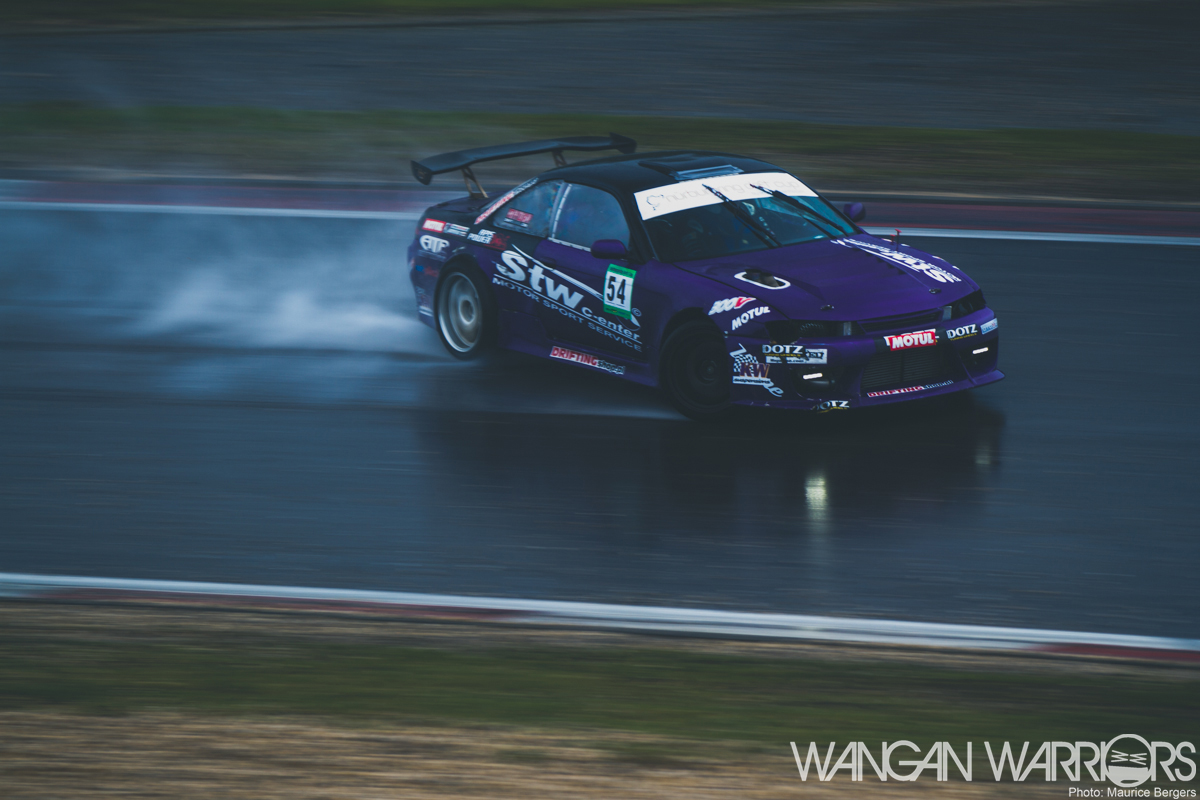 The weather was looking grim though, and the first drops of rain had already started to fall from the sky. As the battles went on, it got darker and wetter… Even with water streaming down the track, Bartosz somehow still managed to get some smoke coming off of his tires. 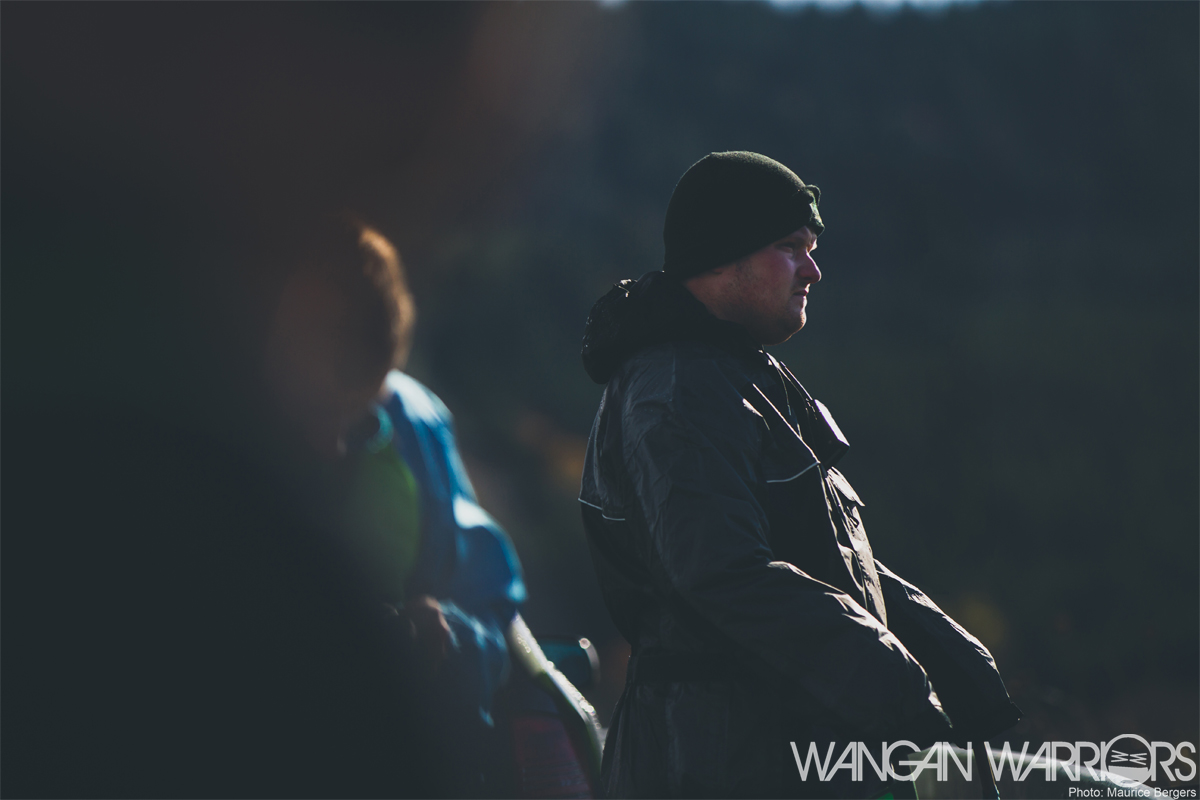 At one point, the rain turned into heavy hail and pretty much everyone decided to find a place to shelter. Luckily the hail was soon gone, the sun came back out and everyone could get back out into the open and watch the rest of the battles. 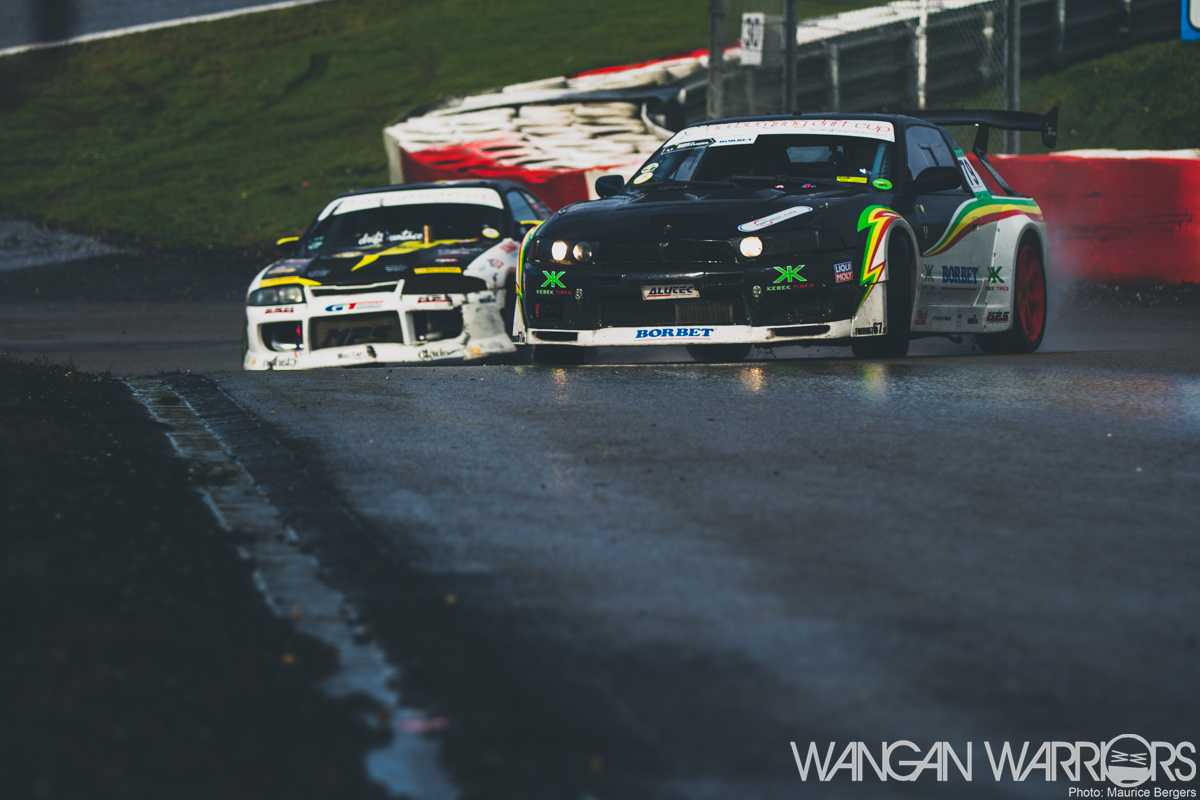 Drivers were knocked out while others moved on, and quickly we got near the top end of the ladder. Who would take home the win? 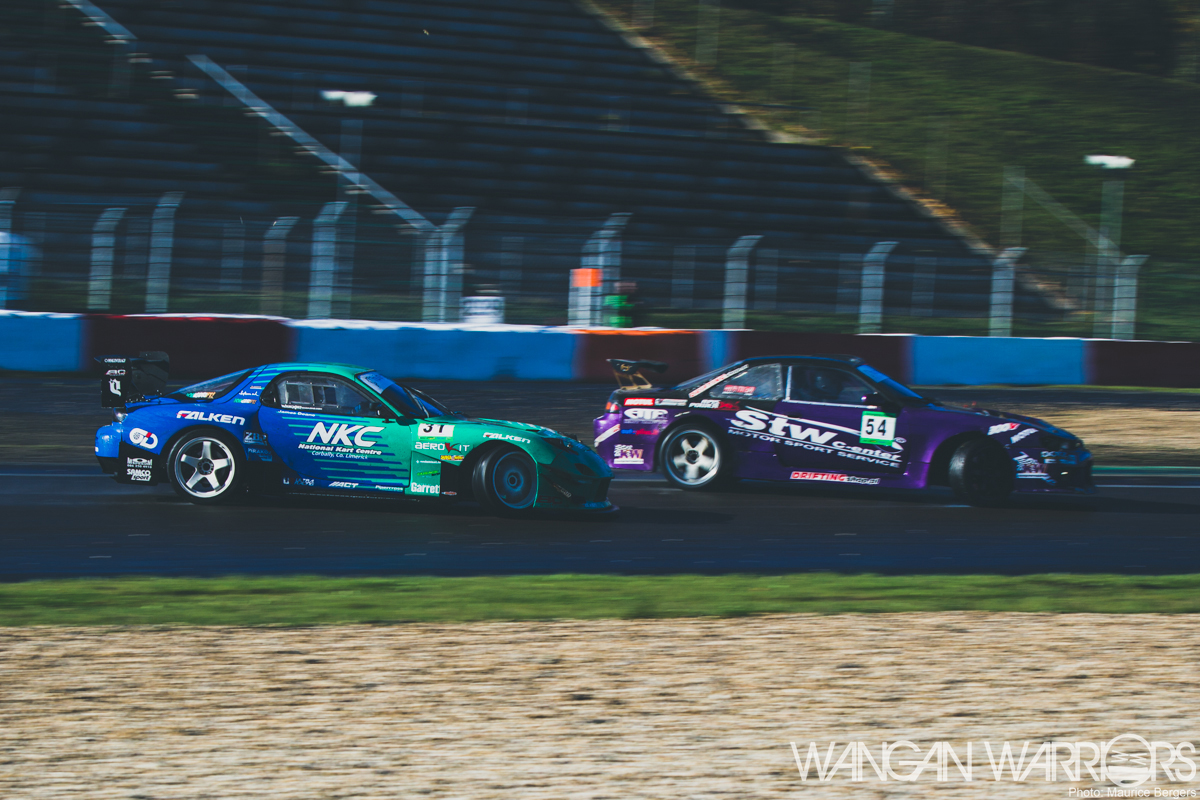 The final battle would be between two of the best drifters in Europe: James Deane and Bartosz Stolarski. Both had been incredibly consistent throughout qualifying and the battles, so this would definitely be an exciting battle! 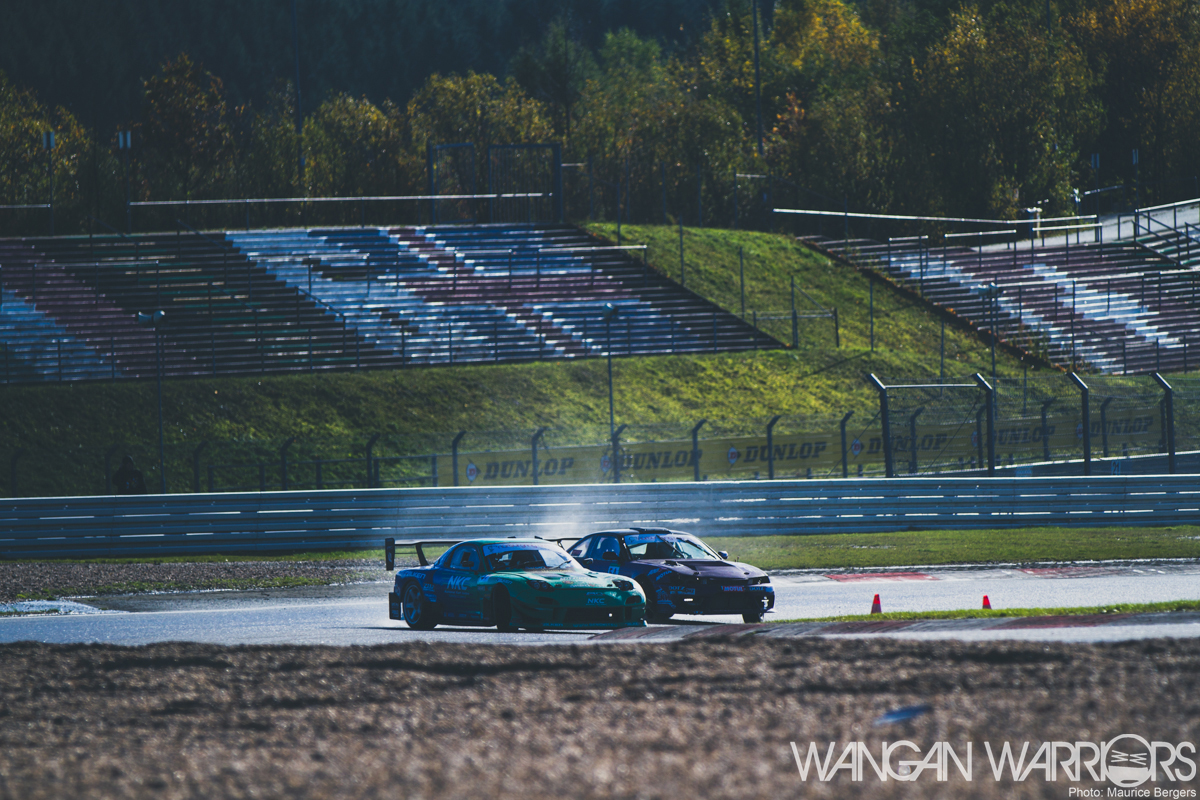 Even though there was water streaming down the track, these guys went at it hard. Coming through the Schumacher S, instead of smoke, there was just a big spray coming off the back of the cars. It proved to be a battle so close, it needed a ‘one more time’ for the judges to come to a conclusion. 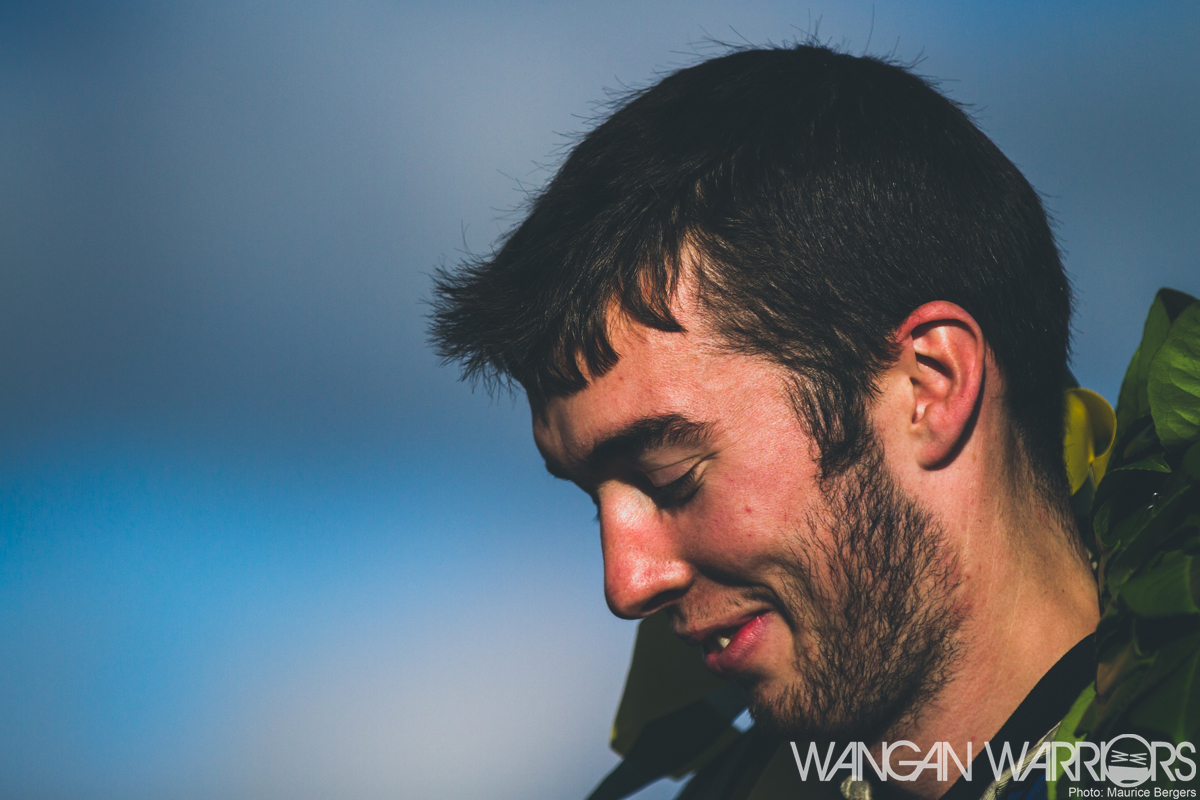 In the end it was James Deane that was just that tiny bit stronger than Stolarksi, and was crowned the 2013 Nürburgring Drift Cup winner! 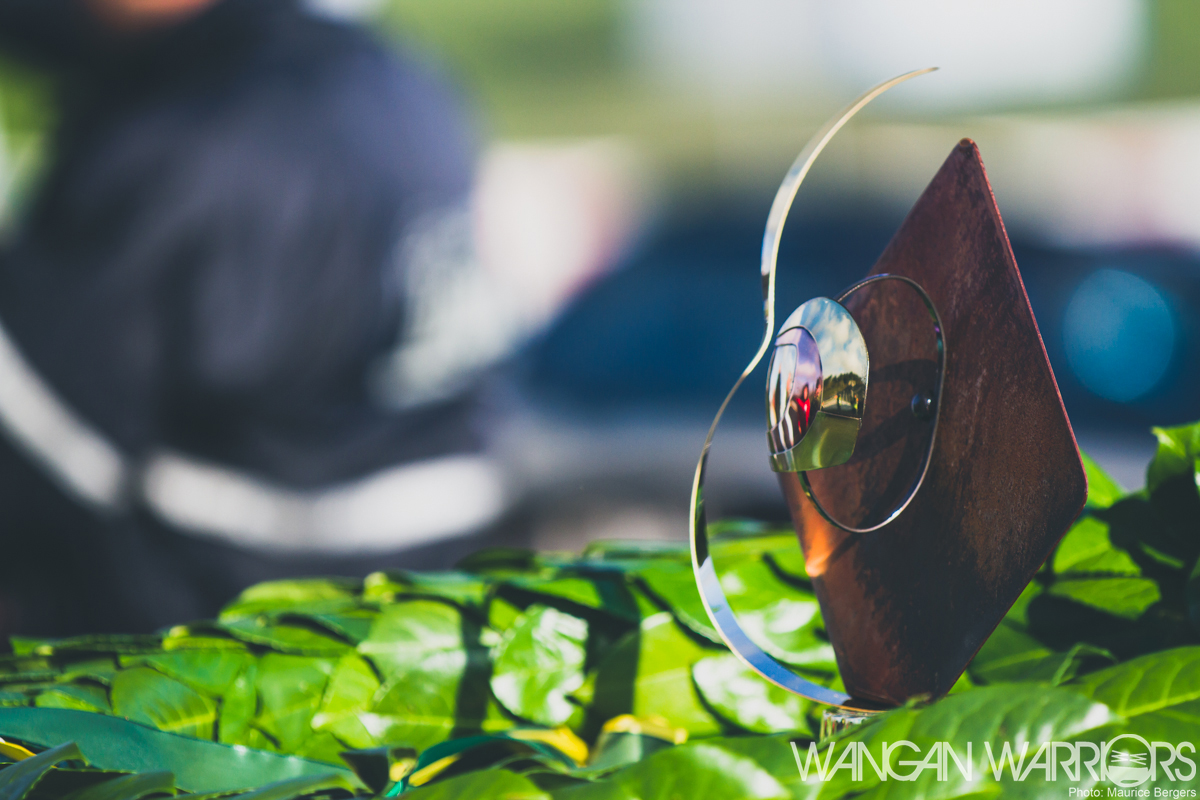 That meant he could add another beautiful trophy to his collection. Let’s see if he can take it home again at the next Nürburgring Drift Cup. 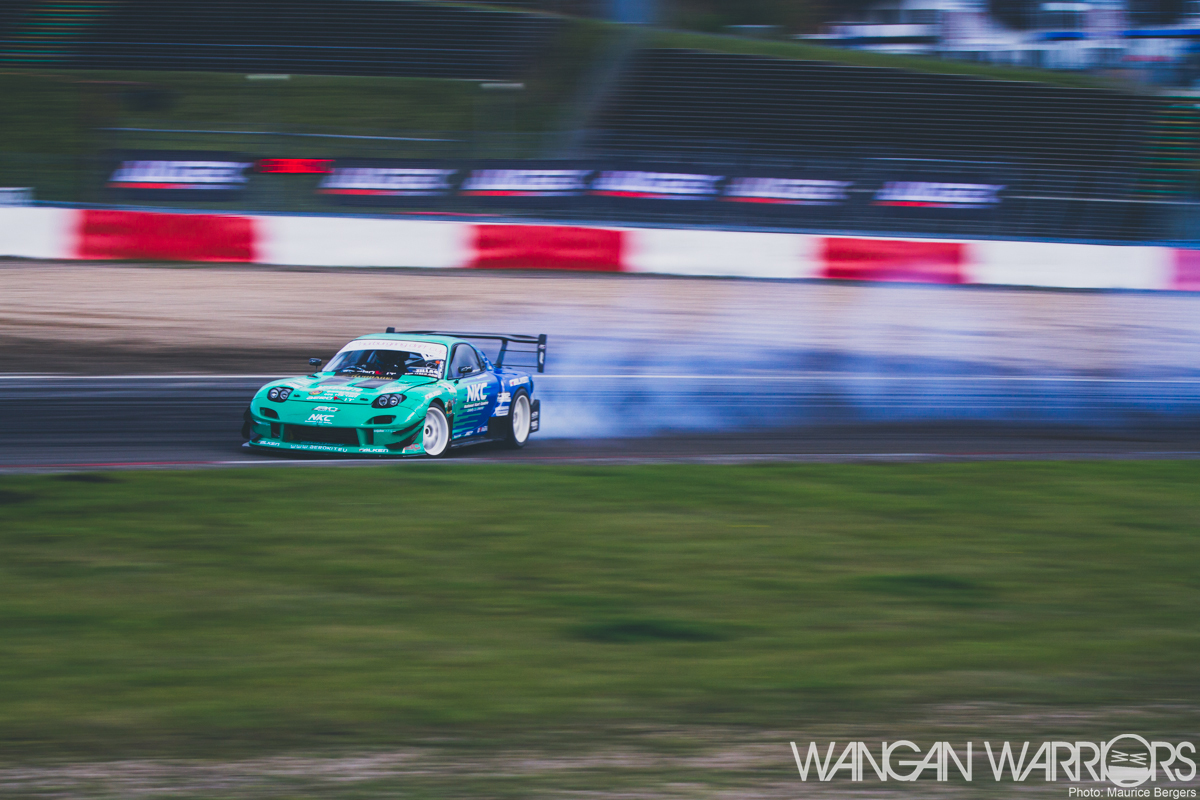 In the end, this was a great event that really gave me a taste of what drifting was like on an international level. I absolutely can’t wait to shoot more events like this!

A big thanks to everyone involved with the Nürburgring Drift Cup for making it an absolutely awesome weekend!