The last couple of months went by so fast I can’t even remember what I did during all those weeks. I travelled a lot, that’s for sure, and even to a track I never visited before. Maurice and I went to the 24H of Zolder in Belgium a few weeks ago as guests of a team and it was great to visit an event as a visitor for the first time in years. 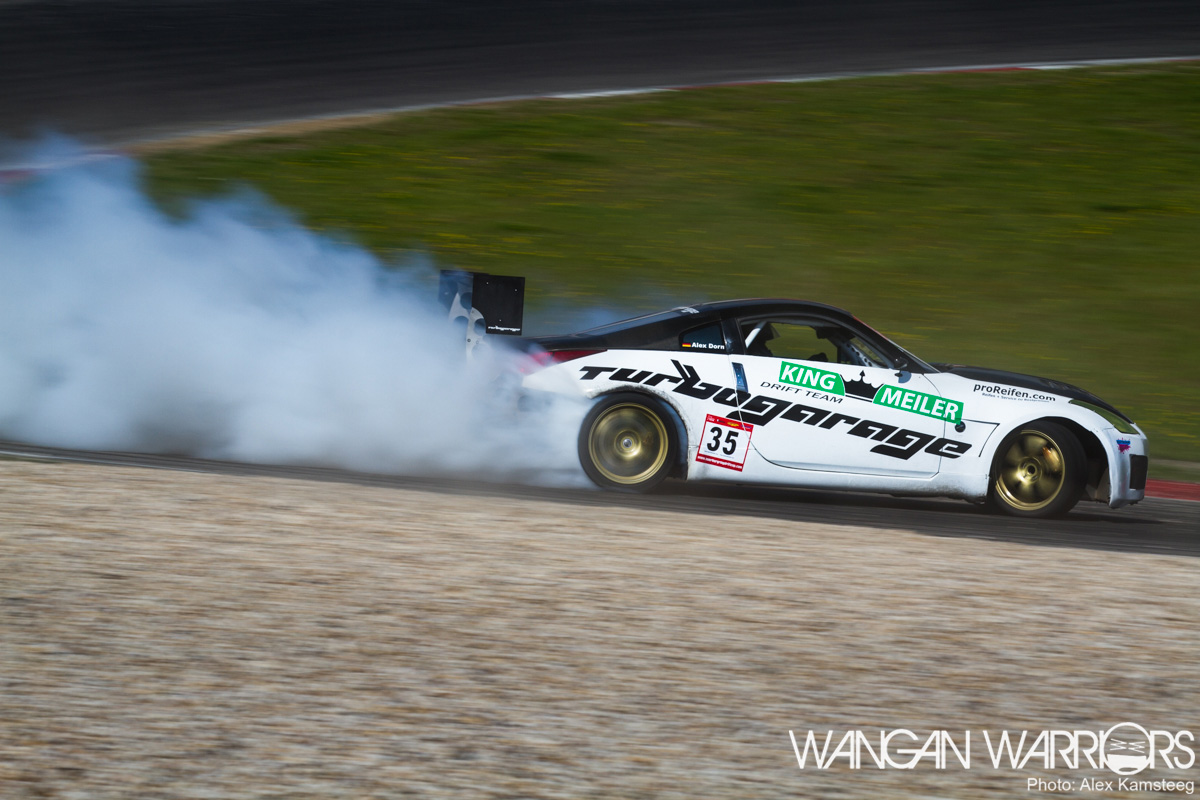 But a lot of the other weekends were spent at the famous Nurburgring. When I drove to that magical place for the very first time in my life last year I discovered that all the stories about it were true. Since then I’ve visited it for so many times that I can’t even count how often I’ve been there. The last two months alone added four more visits to my tally. 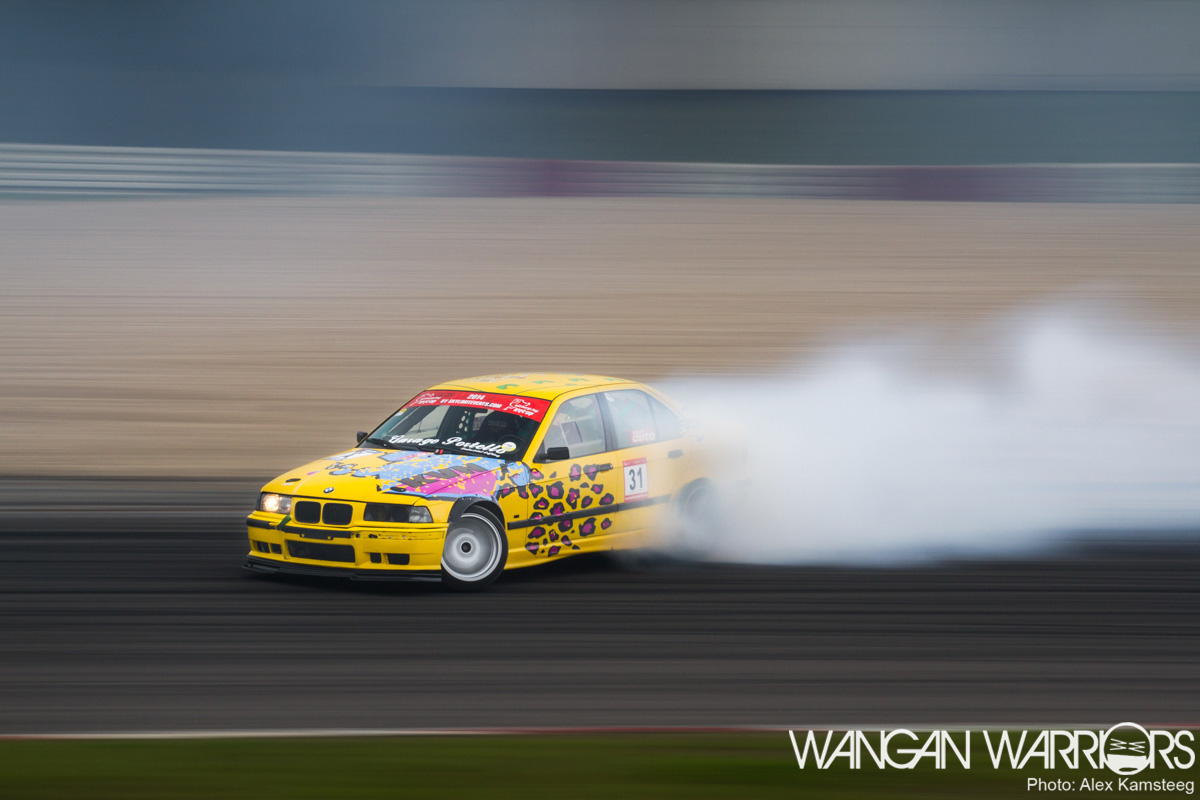 The first visit back in August ended in disaster, a tiny and previously undiscovered medical problem decided to manifest itself while I was a passenger on the Nordschleife part of the Ring. Unfortunately I had to stay a few days in a German hospital with so many wires attached to me that I looked like a proper Terminator, while I could hear the cars blast over the Ring through the open windows. I’m now the unofficial holder of the Bridge-to-Hospital record among my friends, something that sounds more awesome than it is. 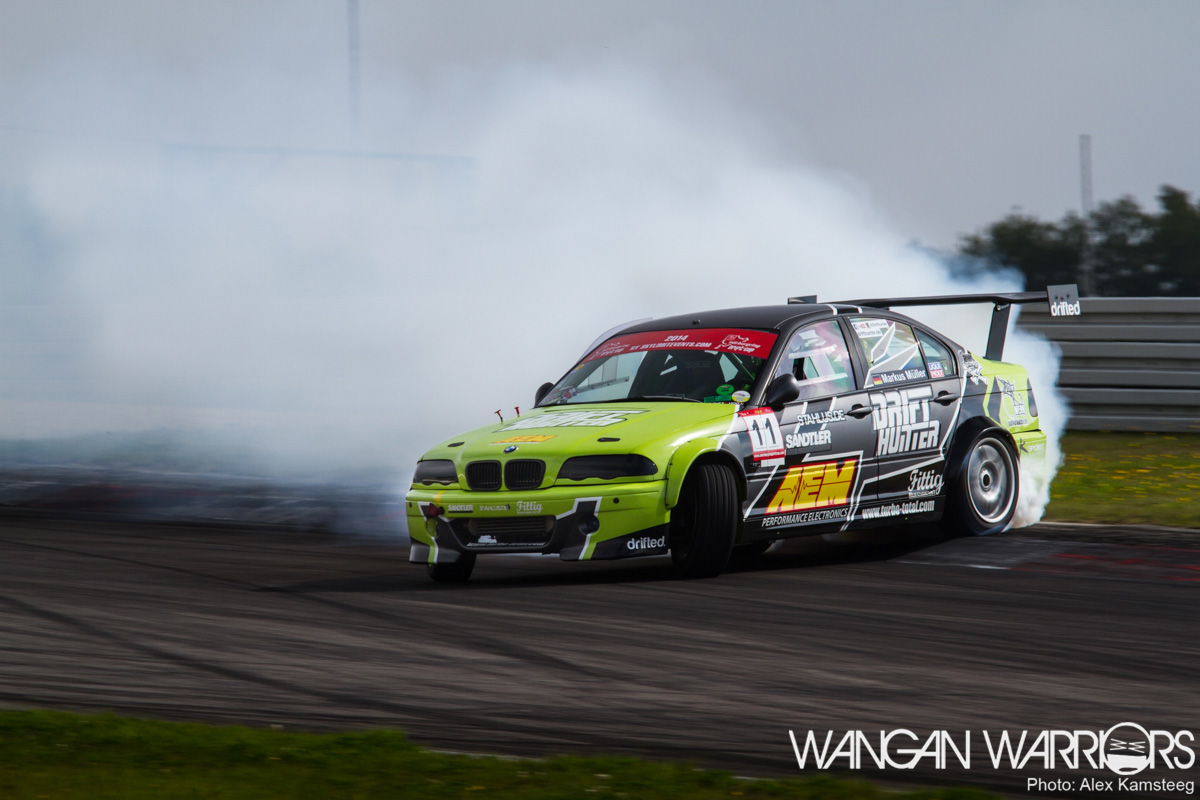 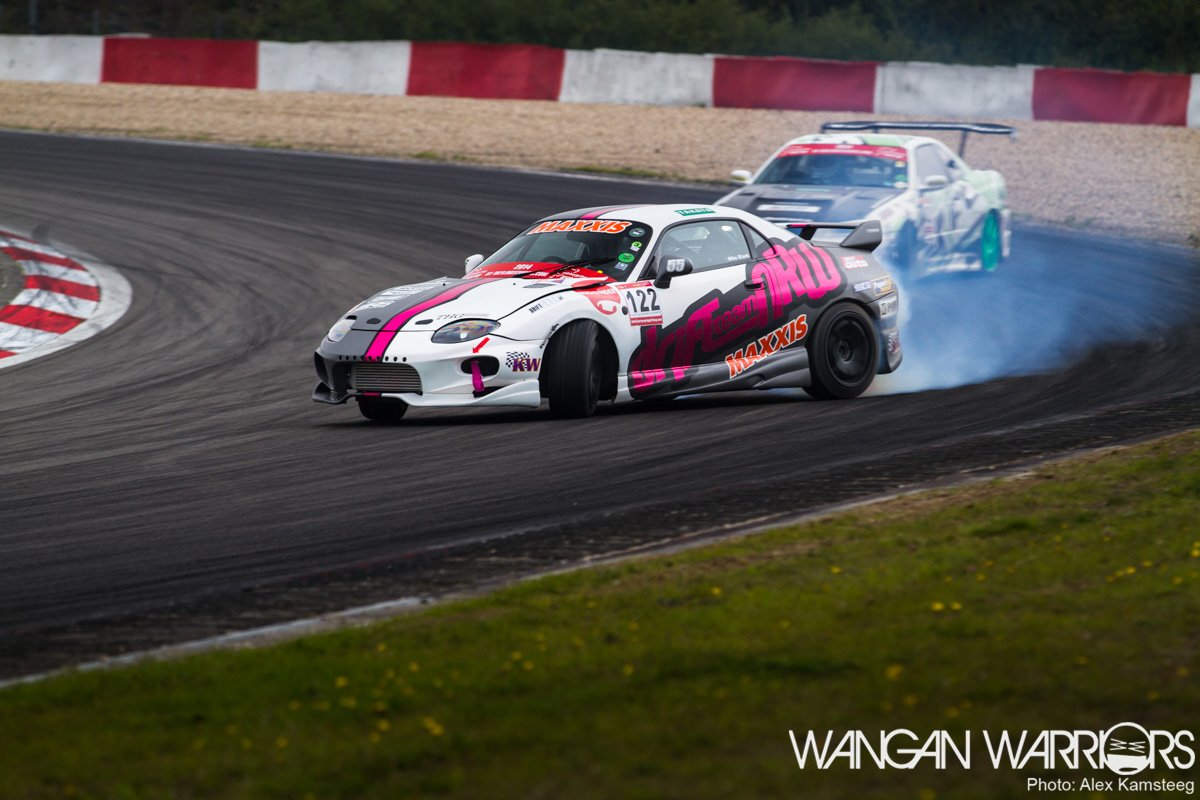 You might think I would get bored. Travelling to the Ring, again. Shooting drifting, again. But no, that isn’t the case. I’m meeting new and old friends there, I love the atmosphere at a drifting event and the action never ceases to amaze me. And in case that wouldn’t be enough, the organisation decided to alter the track significantly this time. 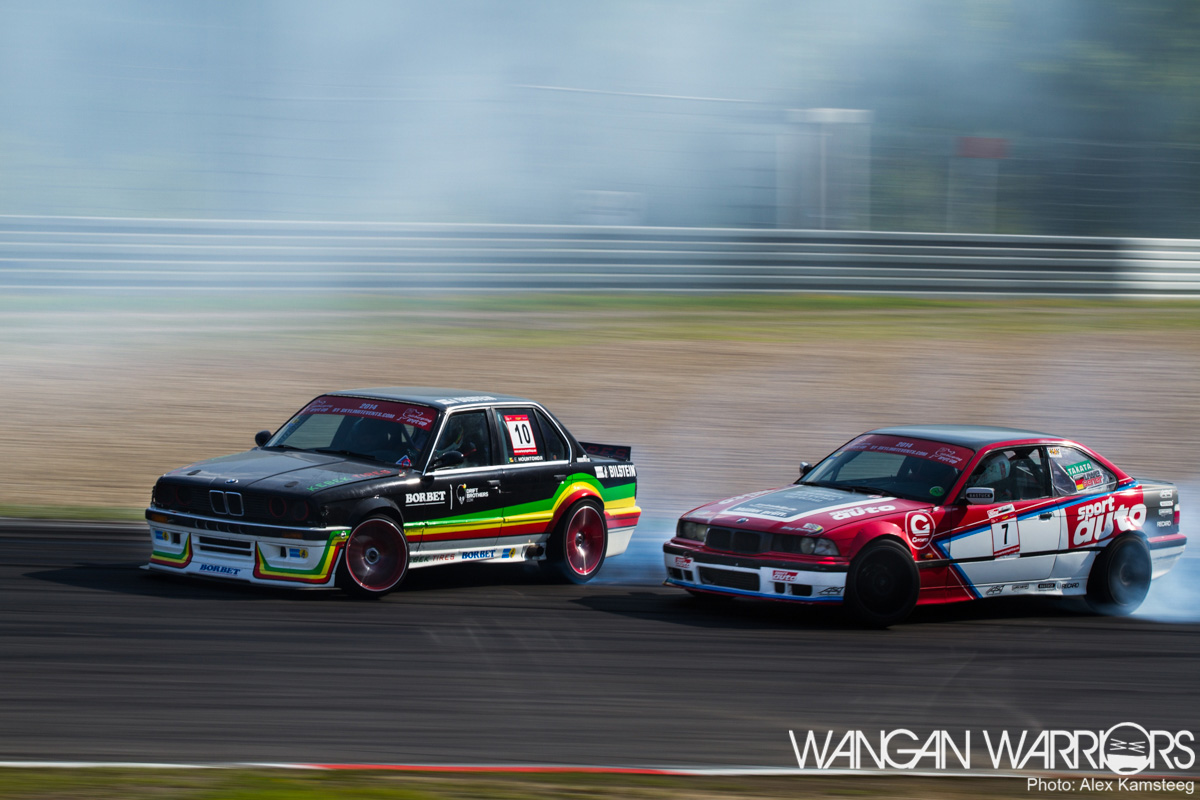 As I wrote in my article about the first round I loved the track of the first two rounds. It had everything, from long corners to tight bends and a steep climb. And lots of photo opportunities too, at the second round I tracked my movements and I easily walked several kilometres per day. But this time, the organisation turned the whole track around. 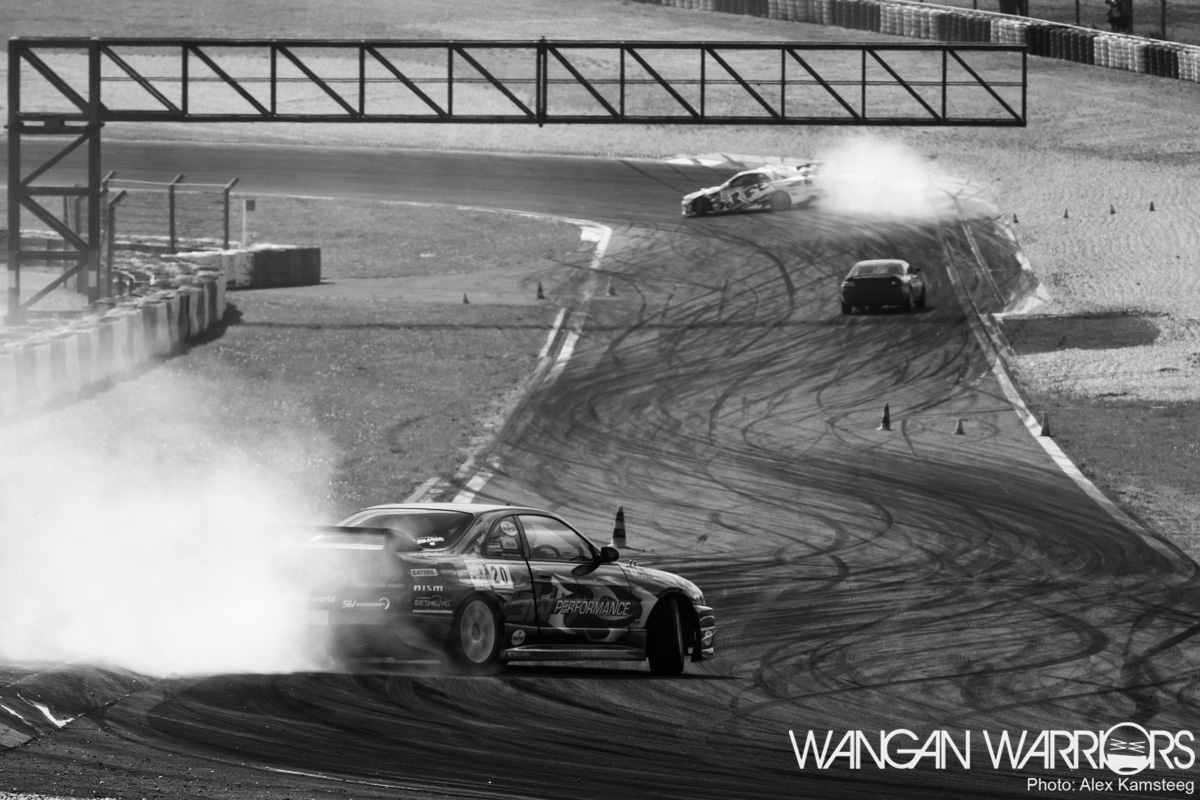 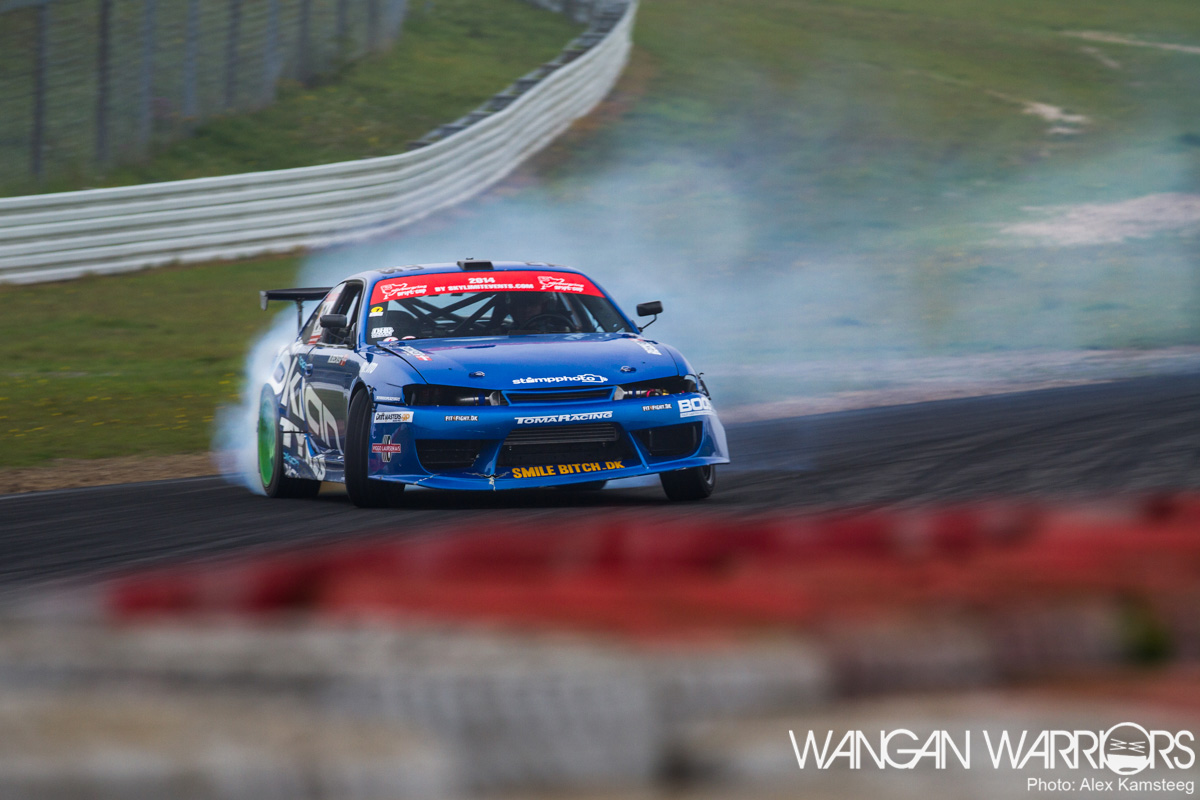 It was a track that favoured the drivers with an aggressive driving style. And well, there are hardly any drivers with another style at the NDC! The track was downhill from Little Monaco all the way to the Dunlop corner and the cars achieved sideways speeds in excess of 150 km/h just before that last turn. 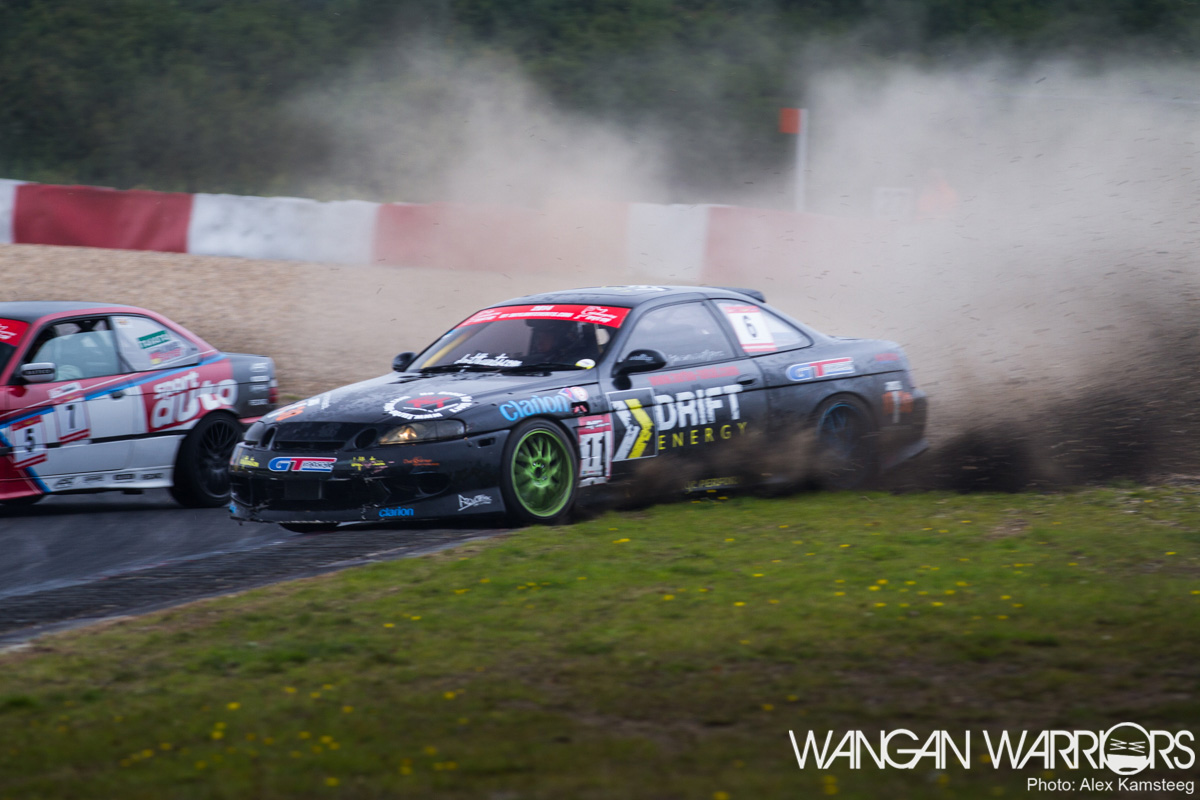 An aggressive driving style combined with such high speeds was a recipe for a few spectacular moments. On the first day, Friday, most drivers started out a bit cautious before they pushed it further and further. And naturally, some of them dipped a wheel or two in the gravel. Although I’ve been on the receiving end of those stone showers more times than I would like, it still is a lot of fun to see the grass, sand and rocks flying around. 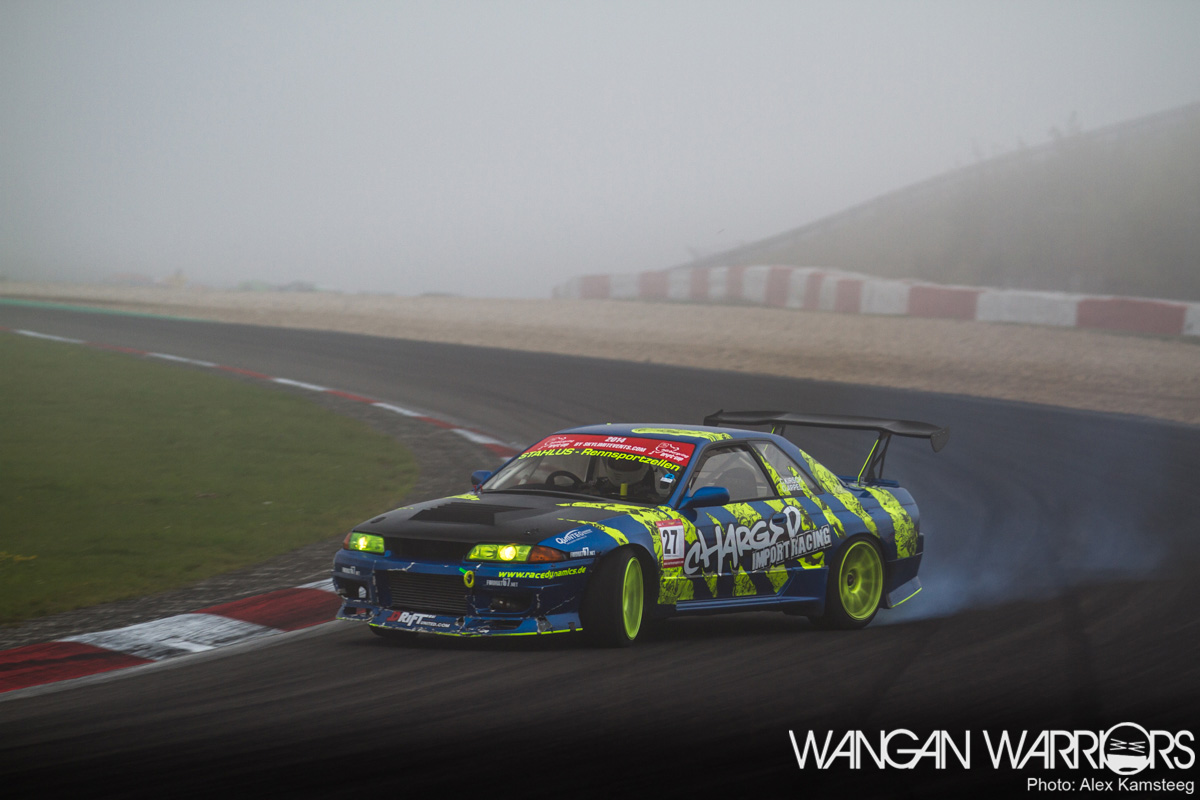 At the end of the first day the drivers really got the hang of it and I couldn’t wait for the qualification runs on Saturday. However, Mother Nature decided to up the ante a step and changed the weather from warm and sunny to cold and foggy. And well, that ruined the fun a bit. 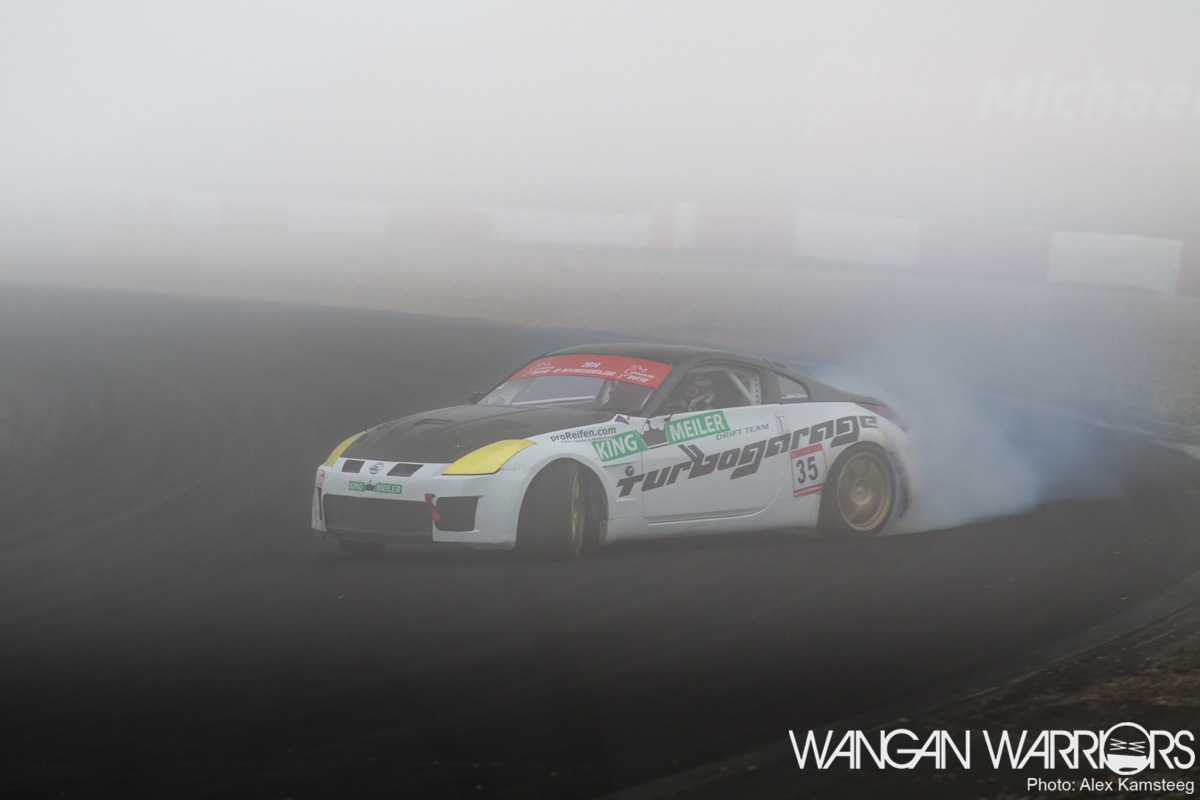 At first the visibility was limited but a few brave drivers went out nonetheless, After only a few runs the fog got so dense the autofocus on my cameras, which works by detecting contrast, decided to stop working. When one of the cars crashed into the guardrails the officials decided to close the track for the time being. 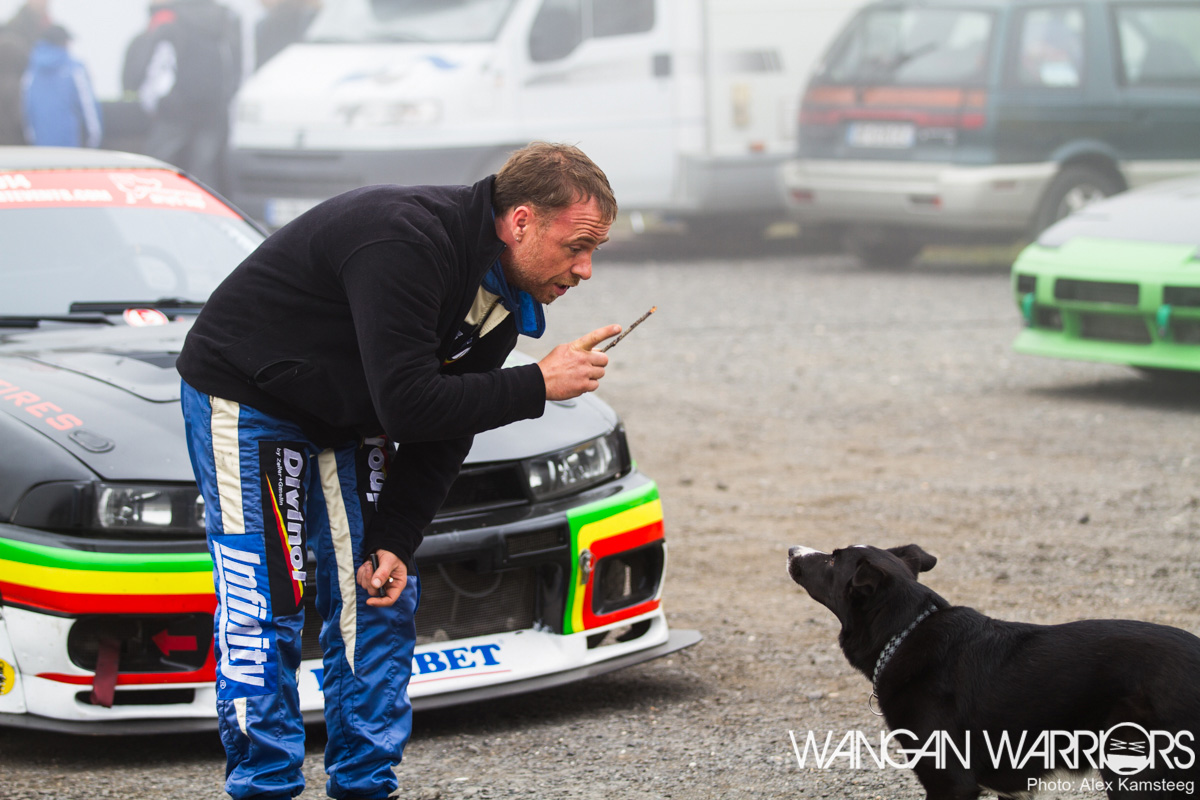 Do you remember I said something about getting bored at a drifting event? I never got bored before, but having to wait from 9 in the morning to half past two in the afternoon even pushed me to the limits. Normally I use the breaks and quiet moments to wander over the paddock, taking pictures of the people working on their cars. But not this time, everybody already had their car readied the evening before and after a few hours everybody was looked extremely bored. 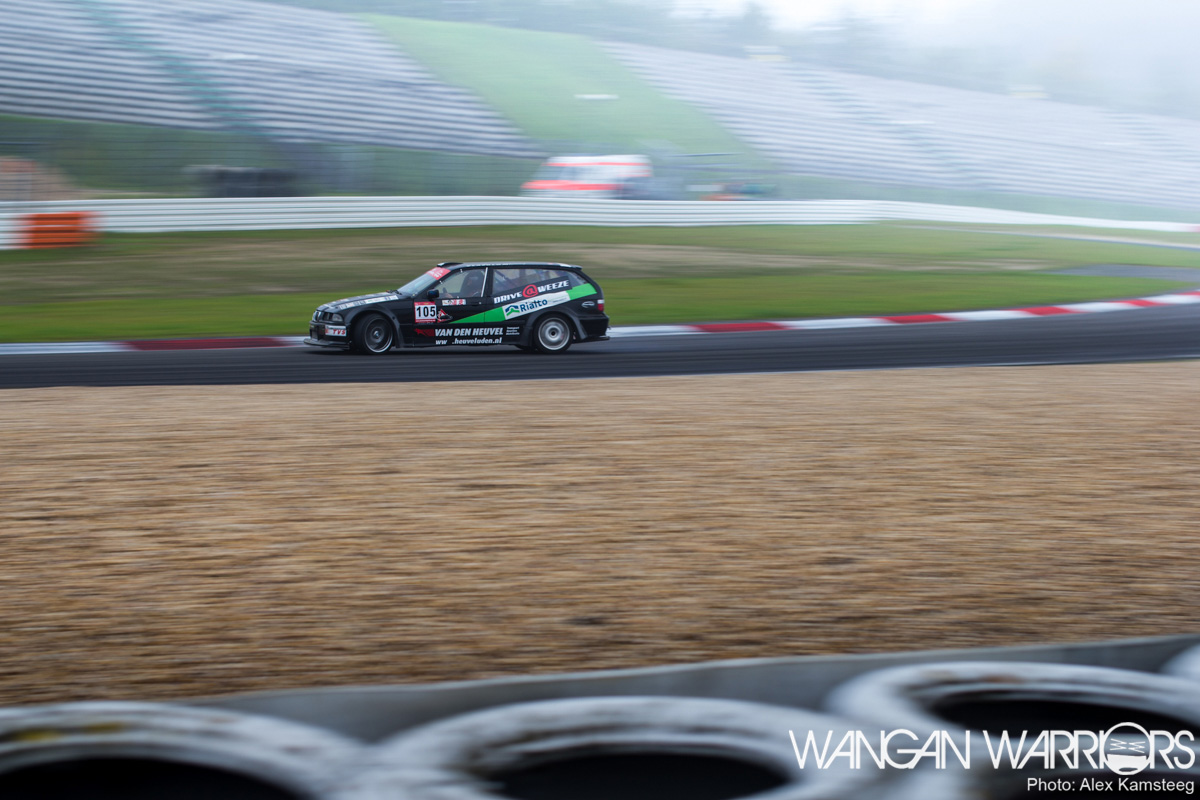 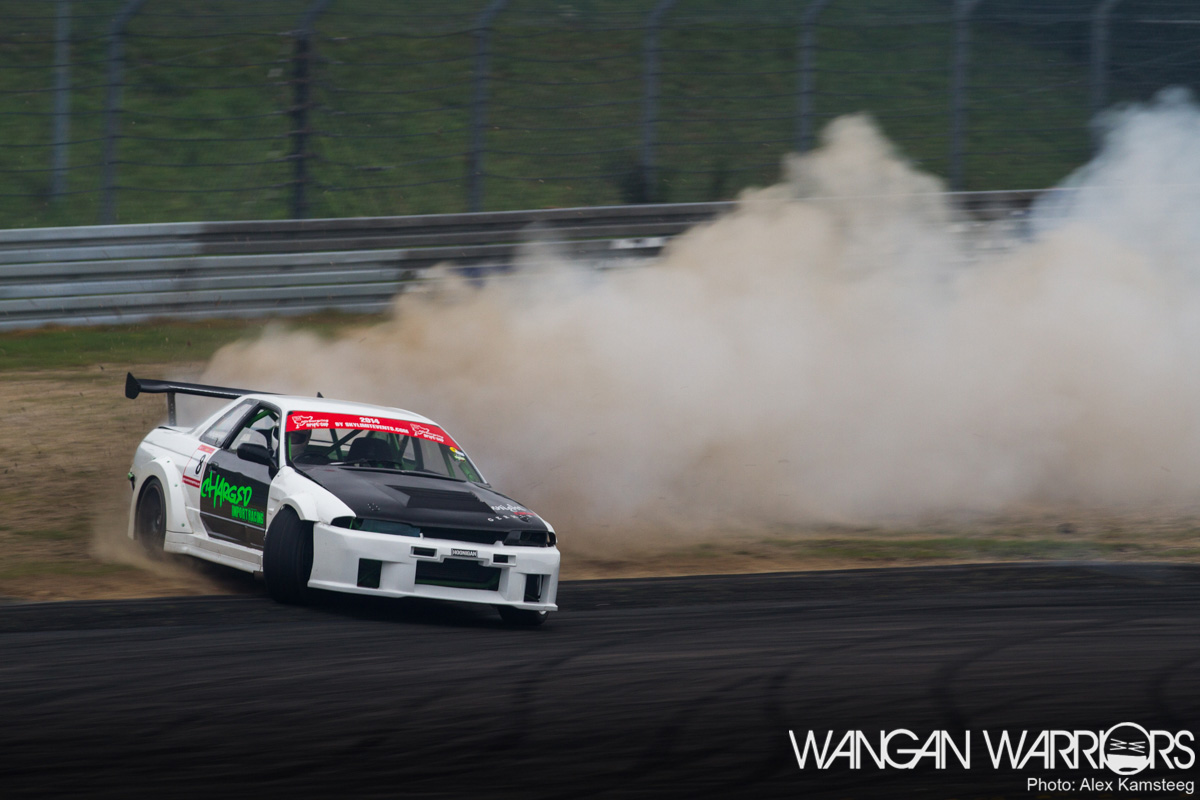 With the sun finally warming the track the drivers pushed themselves as far as they could while driving as much as possible in the few hours that remained for that day. They knew that on Sunday they would have one chance to qualify as high as possible and no time between the qualification and the battles for evaluation and last minute adjustments. 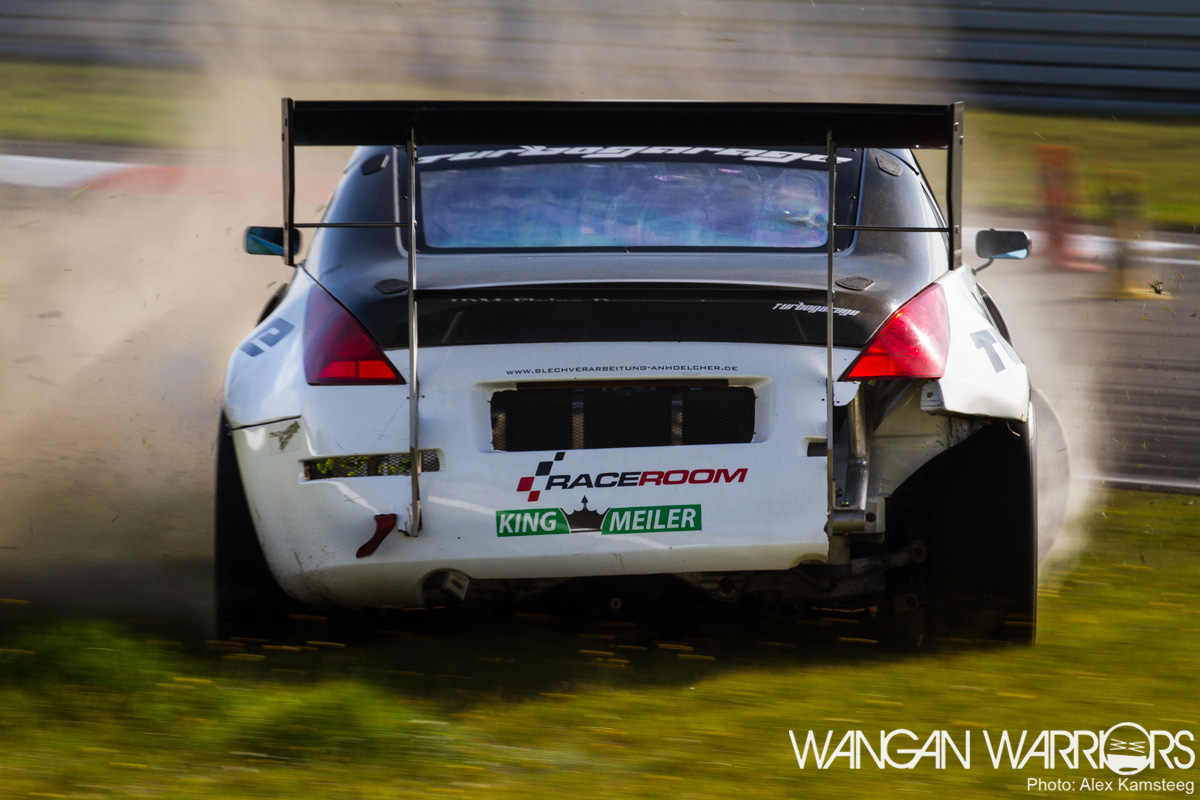 And well, that meant even more off-track excursions. There were still a few wet spots on the track and suddenly going from grip to no grip proved to be a bit of a surprise for more than one driver. Luckily no accidents happened and only a few cars got stuck in the gravel requiring a rescue. 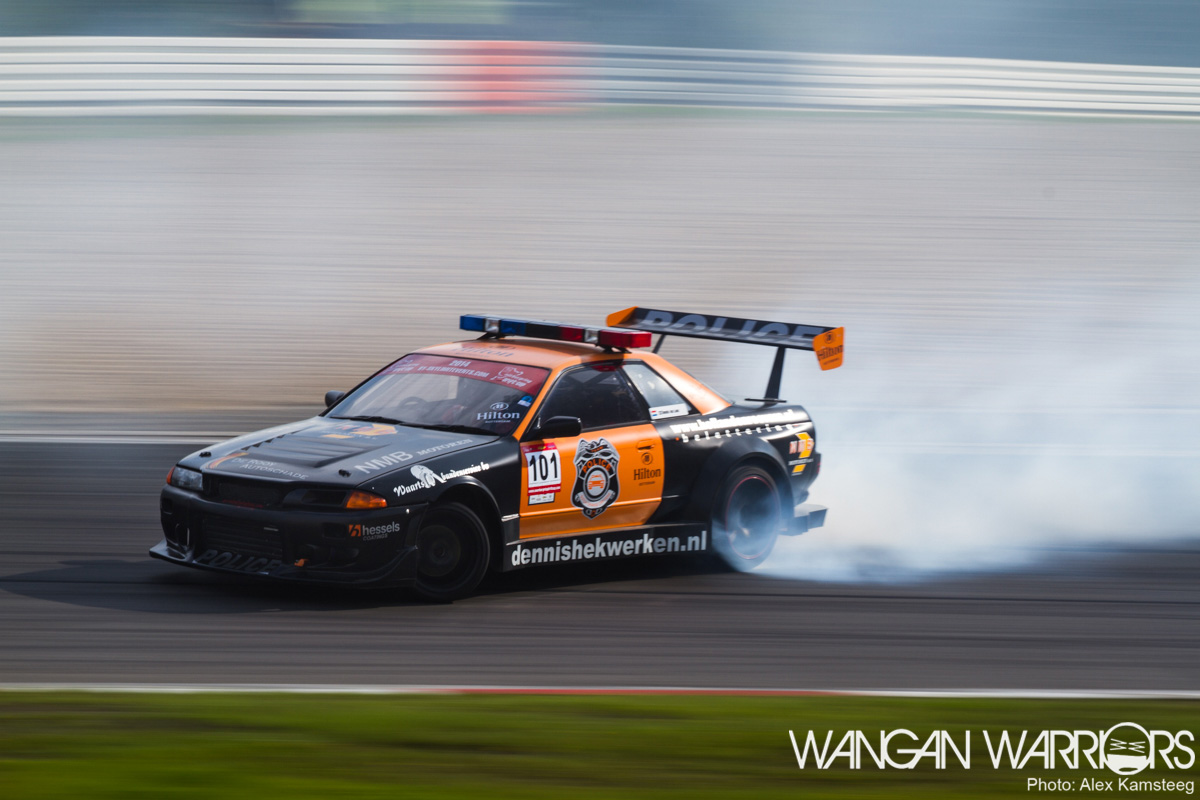 When the track dried car after car drifted from corner to corner in one fluent motion. They started so close together that the track was still covered in smoke from the previous car so they sometimes had to ease on the throttle because they couldn’t see where they were going. Luckily for the drivers and the spectators a few gusts of wind cleared the track from time to time. 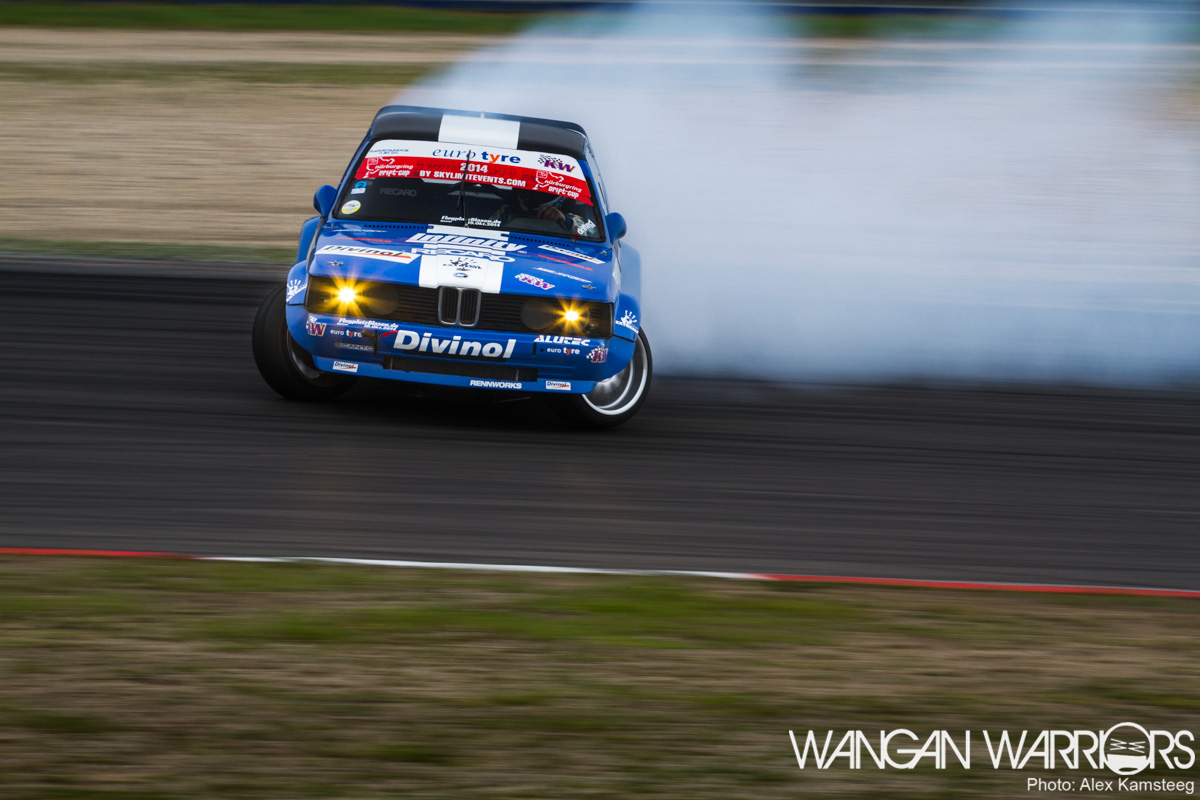 On Sunday the weather was perfect, especially compared to the previous day. A bit of fog in the morning caused some nervous looks at the sky but when the wind picked up and the sun started shining we photographers suddenly found ourselves suddenly a bit too warm dressed. Not that we minded though, a dry track is good for the clouds of tyre smoke. And well, we weren’t disappointed during the qualifications. 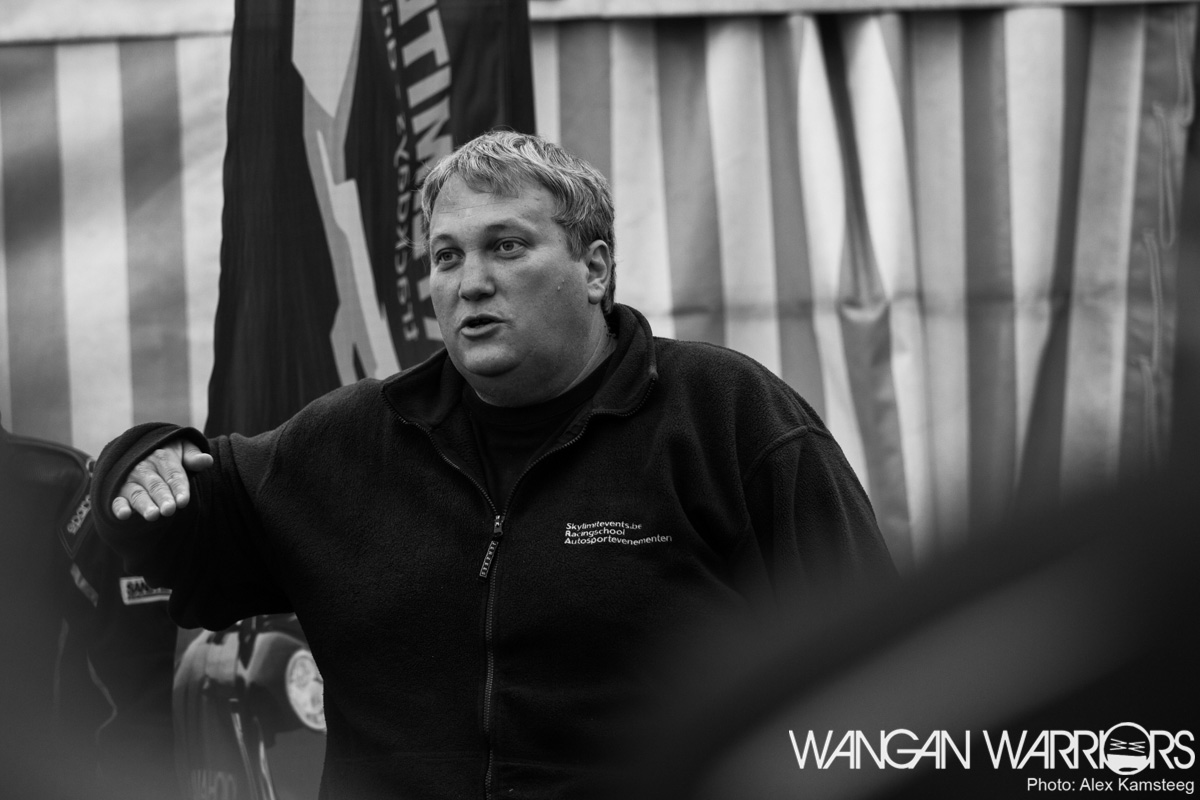 After the break the results were announced during the briefing with the Commander-in-Chief of the organisation, Andy, explaining to the drivers what the jury expected from them in the battles. The drivers listened carefully, with the concentration visible on most faces. With such a high speed track the drivers of the fast cars were wondering how they could keep their car on the track while going sideways at 150 km/h and the people with less powerful cars were asking themselves how they could keep up with the monsters. 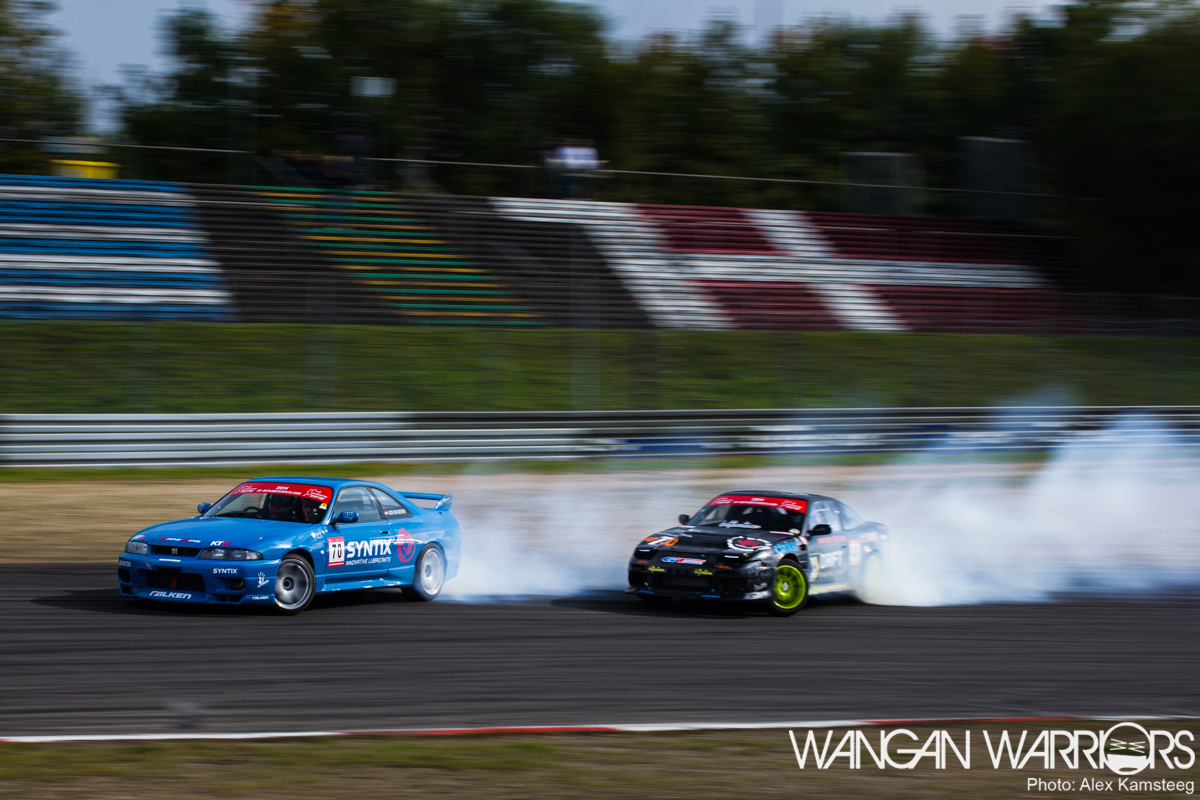 And in the end, it all worked out just fine. For a few hours we witnessed battle after battle, each with huge clouds of smoke and sometimes surprising results. Do you remember what I wrote about the diversity of cars at the NDC? Well, with huge BMW’s chasing tiny Miata’s, old cars beating newer and more powerful ones and family members trying to outrun each other this third round was certainly another prime example of that diversity. 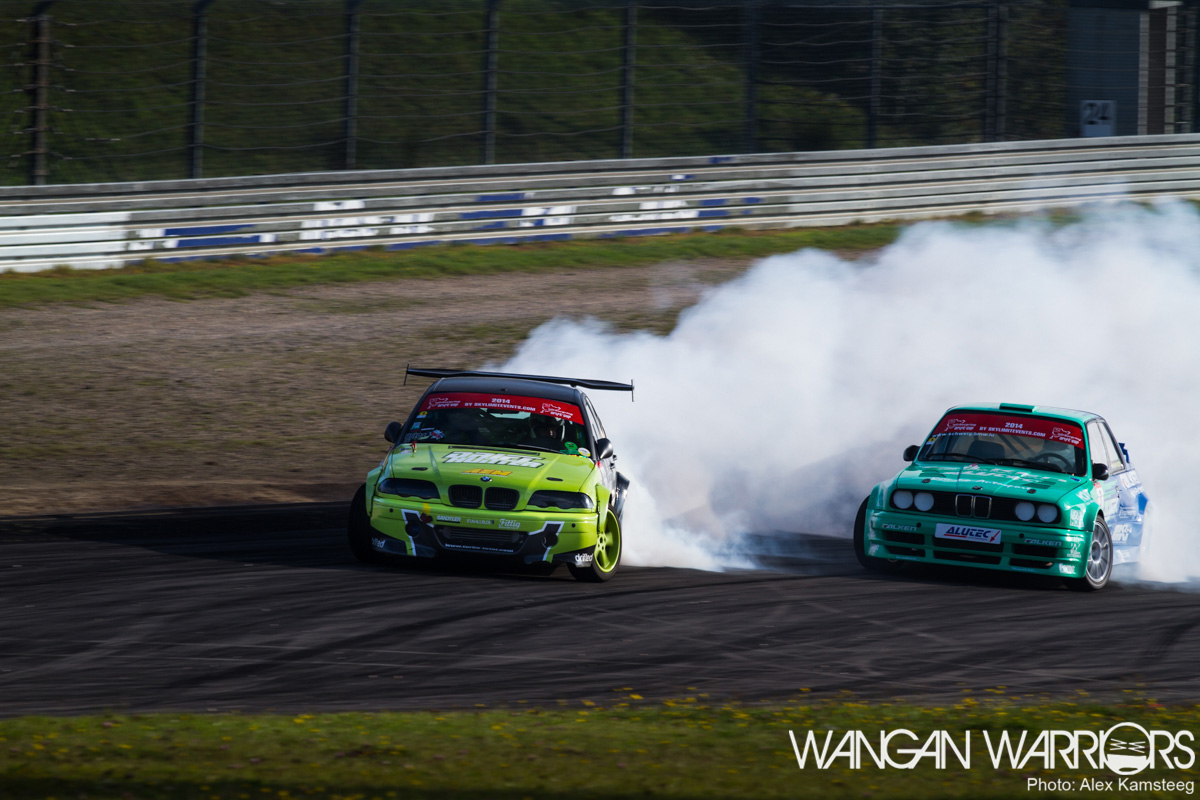 In the end, after a few awesome battles between Markus Müller in his 1JZ-powered E46 against Remmo Niezen in the Falken E30, the jury awarded Remmo his second victory in a row. With only a 14 points difference between these two drivers in the championship ranking the finals in October will be without a doubt be the place of an awesome showdown between these two. 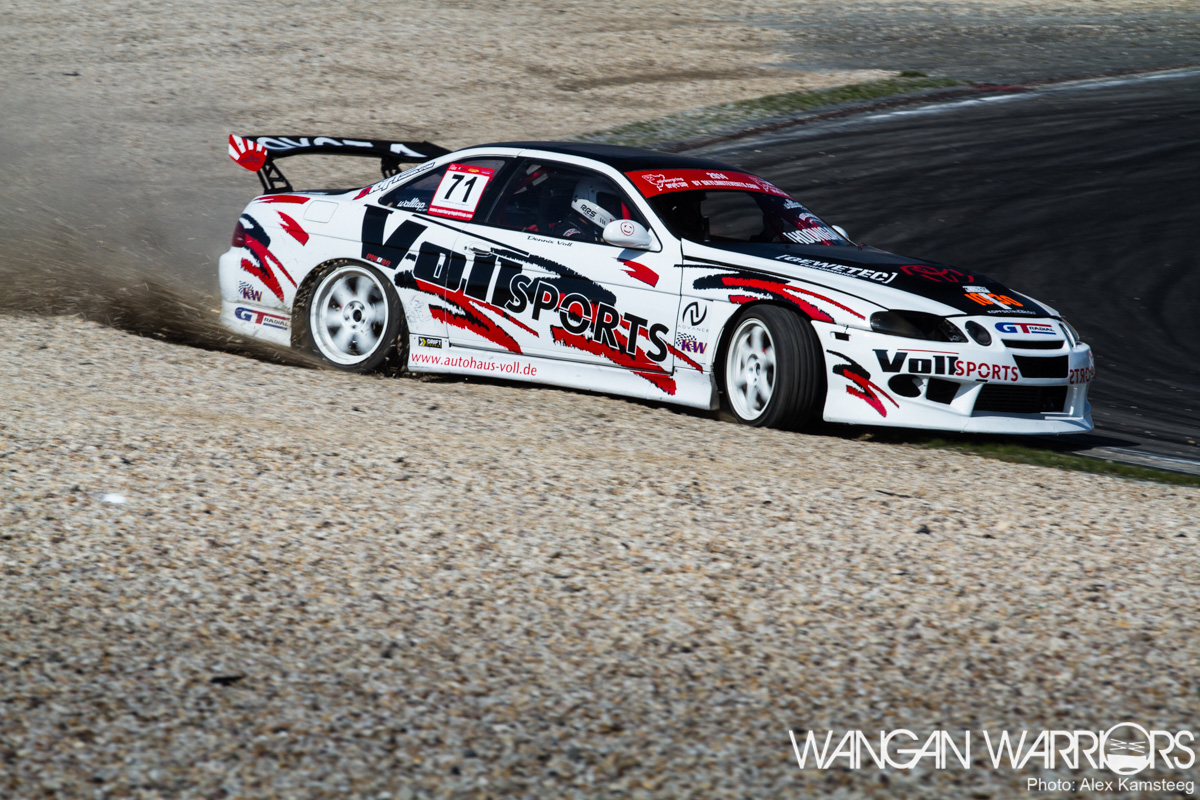 Wet track, dry track, sun, fog, on-track, off-track, the third round of the 2014 championship proved to be a one of extreme conditions and situations. It pushed drivers and their cars to, and sometimes over, the limit and besides the fog I enjoyed myself immensely. And for the last round in October? Markus vs. Remmo! Where is the gong when you need one?