There are days when your sitting at home, watching some stupid series about a few women in prison who think they don’t belong there, orange is the new black or something, and all of a sudden you realize that you’re bored out of your mind. I mean, who watches that crap anyway?
So what do you do? In my case I posted a shout out on my FB page if anyone had something decent to shoot and the first to reaction was a clear one from Jeroen at DBM engineering. “You have my phone number, don’t be a p*ssy and call!”
Needless to say I made the call… 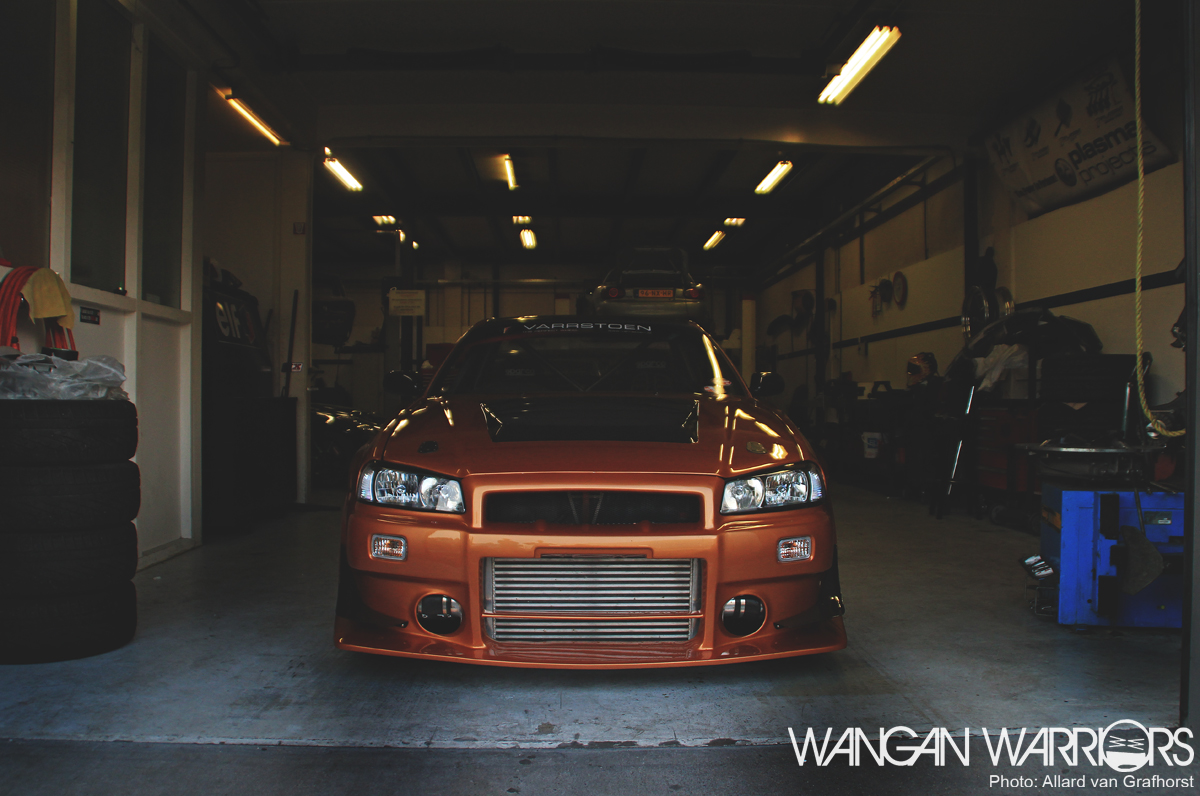 So a couple of days later I found myself at the DBM engineering shop where this angry looking face was impatiently waiting for things to come. This car is a familiar sight in the Dutch Time Attack / Drag / Drift scene but I thought it was time for a well deserved feature on our humble blog. 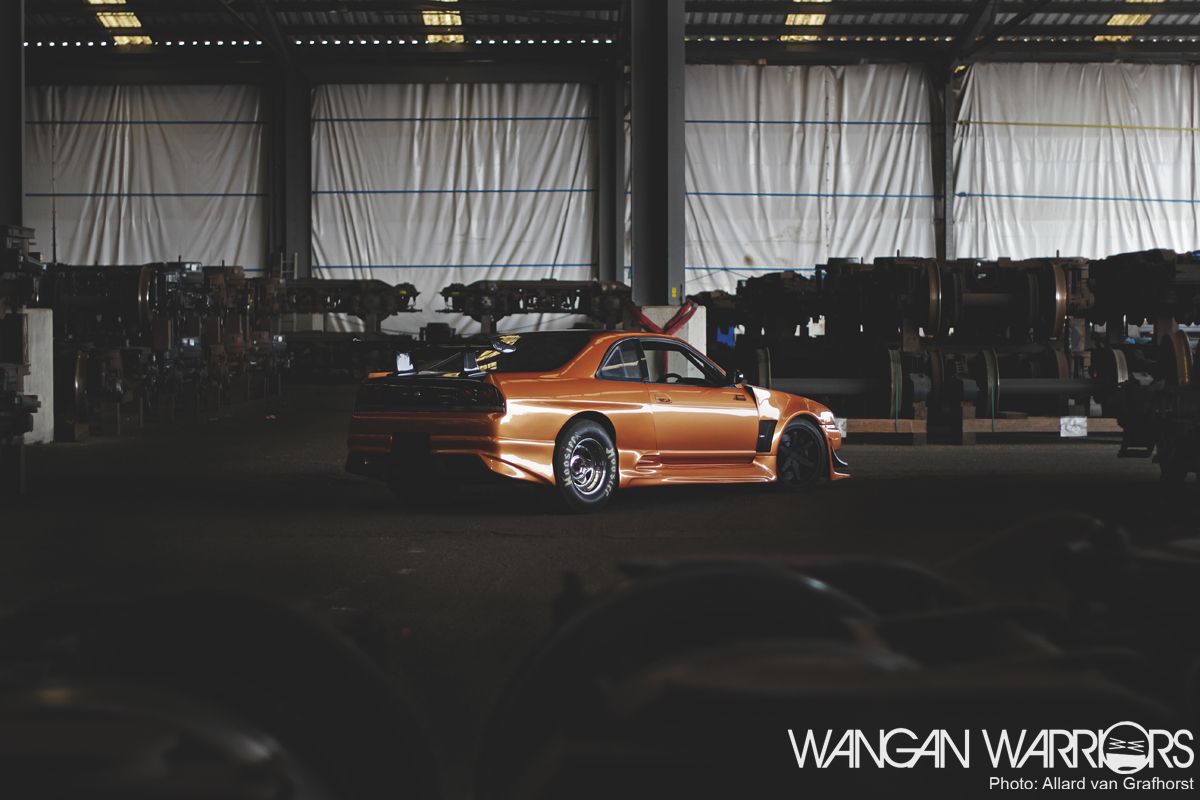 Because it’s not like we can get enough of cars like this now is it? Just look at that R33’s behind and that aggressive drag stance! Wait… did you say R33? But it has an R34 nose? Why yes, but that’s because it is an R33 GTS-T with an R34 nose job… 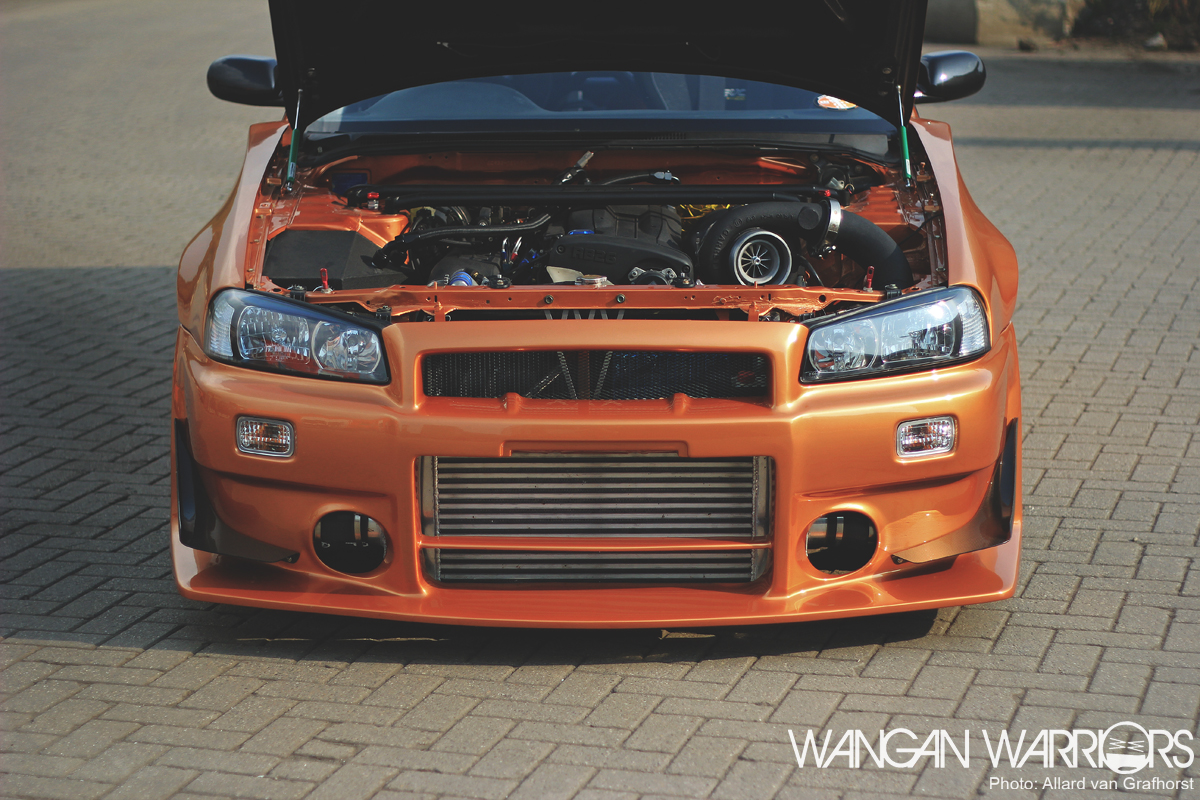 … and it’s packing quite the punch behind said R34 nose job!
That Garrett GTX 4202 turbo not only boosts the engine but your attention level as well and it doesn’t stop there… 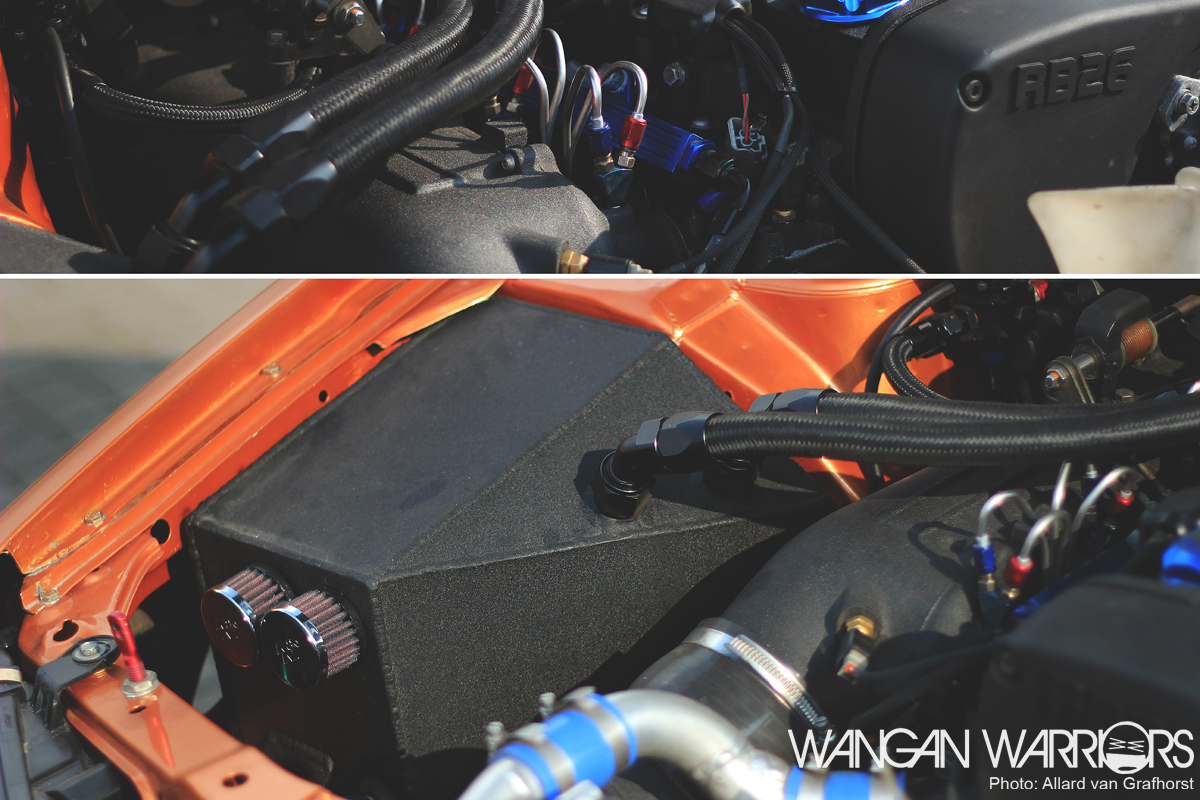 … because to help things spool up a little faster the RB26 still benefits from it’s standard 2.6 liter capacity and a “little” Nitrous Express which in itself is set up to deliver 150BHP shots. That alone is almost twice the power of my daily Fiesta!
I really like how the complete engine and ancillaries are finished in a wrinkle black finish which makes for an almost factory look finish. Almost. 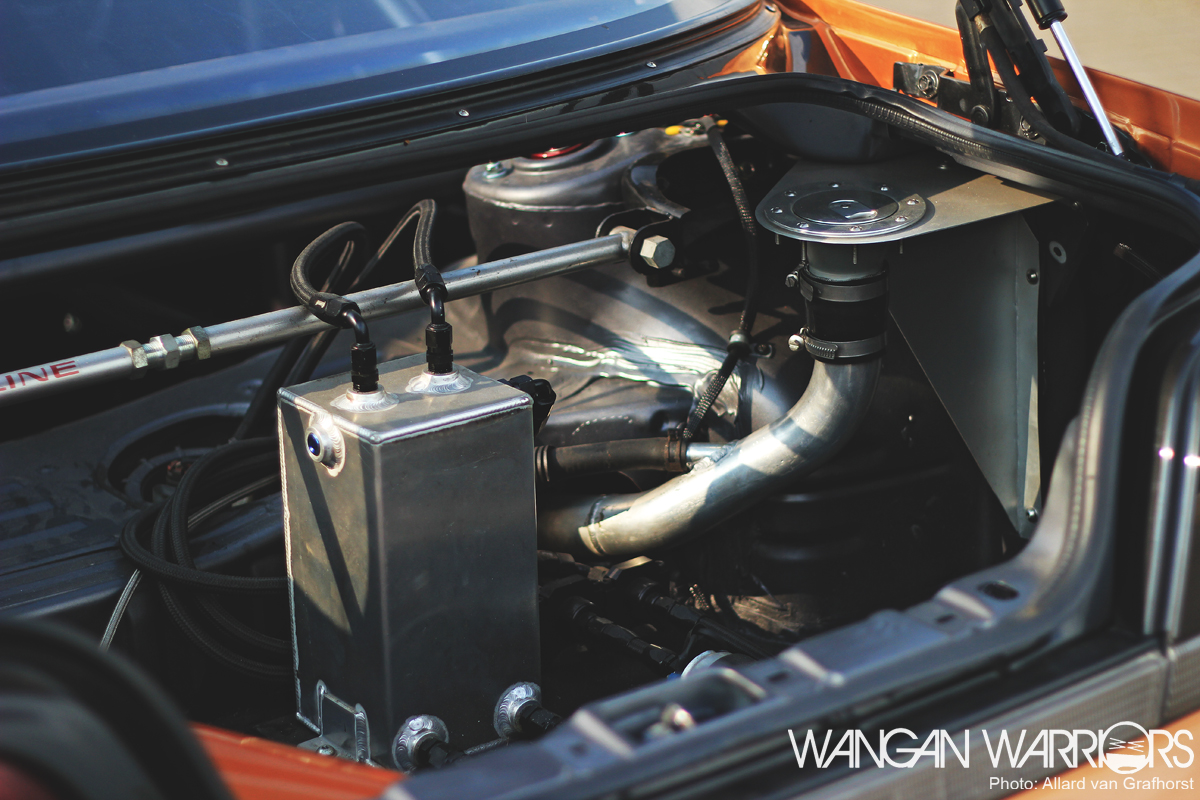 Looking far from factory spec is the complete fuel system. DBM designed a system using 4(!!!) Bosch 044 pumps, which are also usable for E85 fuel, and six 2200 cc injectors make sure the fuel goes where it needs to be. 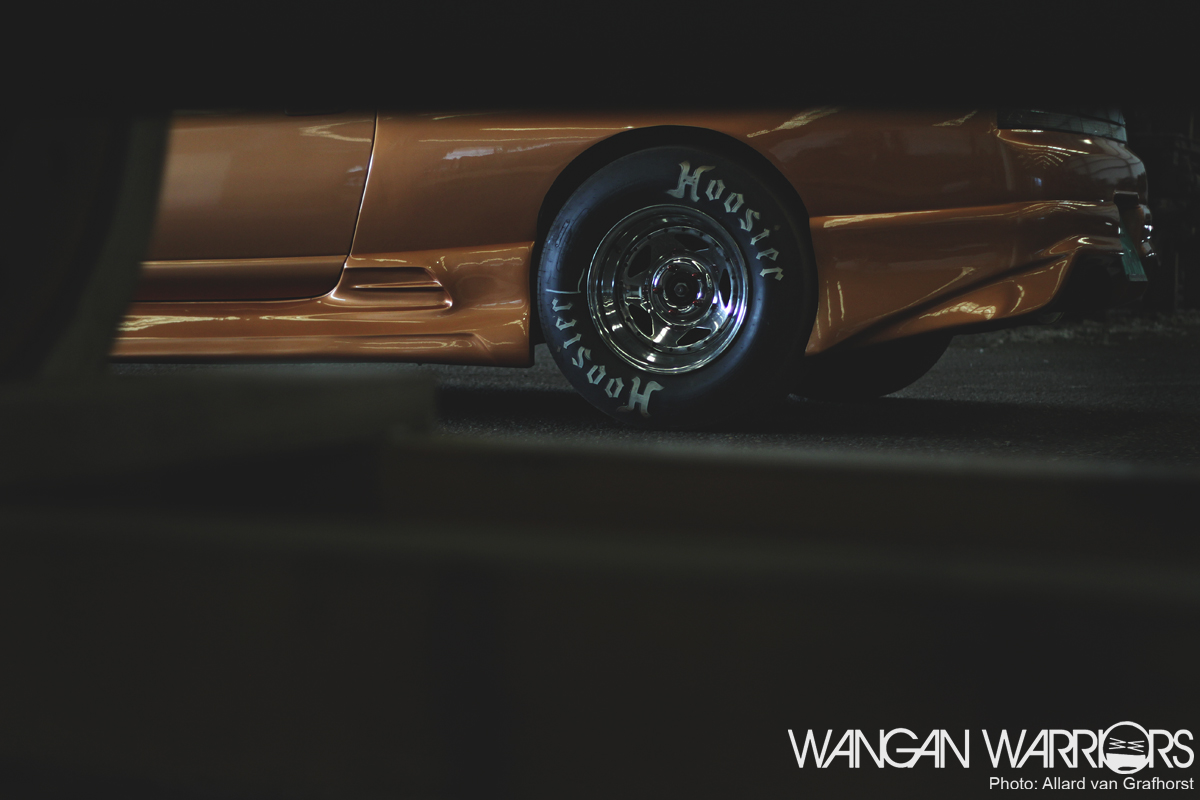 So yes! Those Hoosier 28×10/15 rear drag slicks are dead set necessity. I can tell you that with about 835BHP, the car is a complete and utter beast. It was only a short drive from the shop to the location we would use for the shoot but Jeroen made sure I felt the full potential the car has. To say it’s a hand full is the understatement of the year! 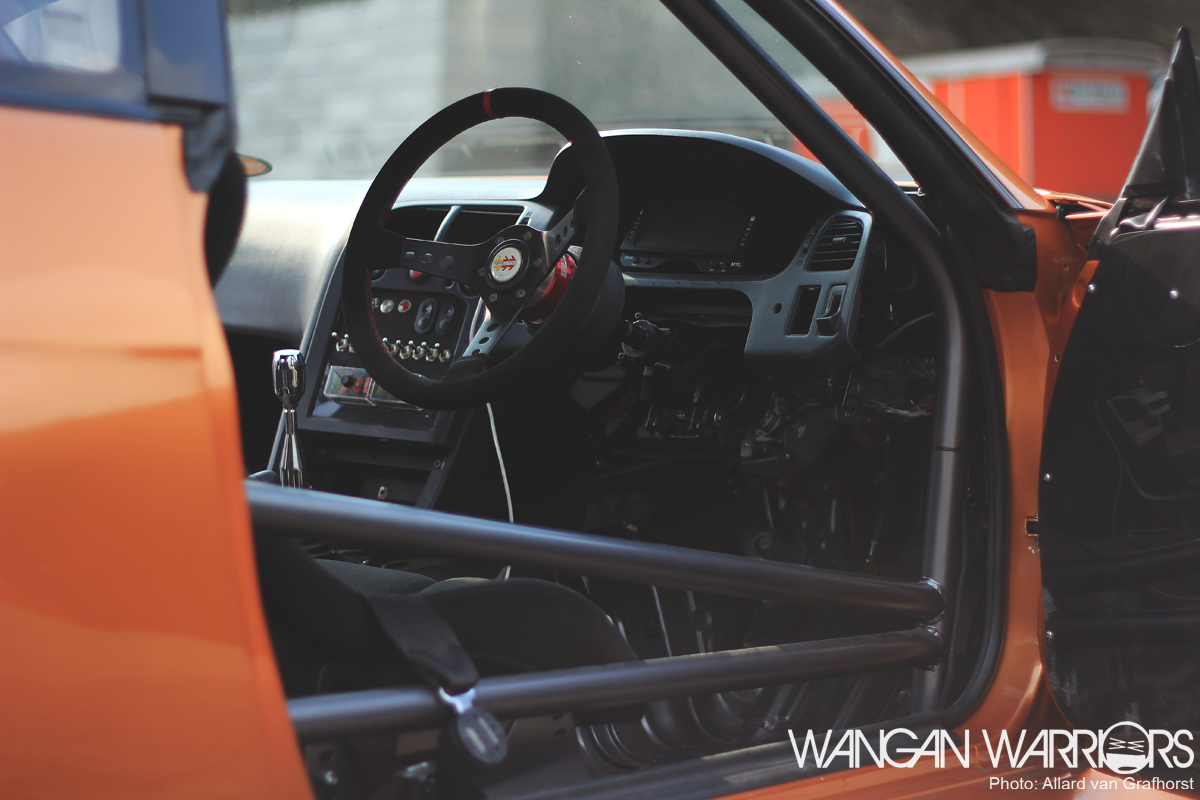 The interior is kept pretty spartan. It’s completely stripped and only things that are a necessity have been kept. Like I said before, the car is a beast so trust me when I say that you need your eyes on the road anyway when the turbo spools up! 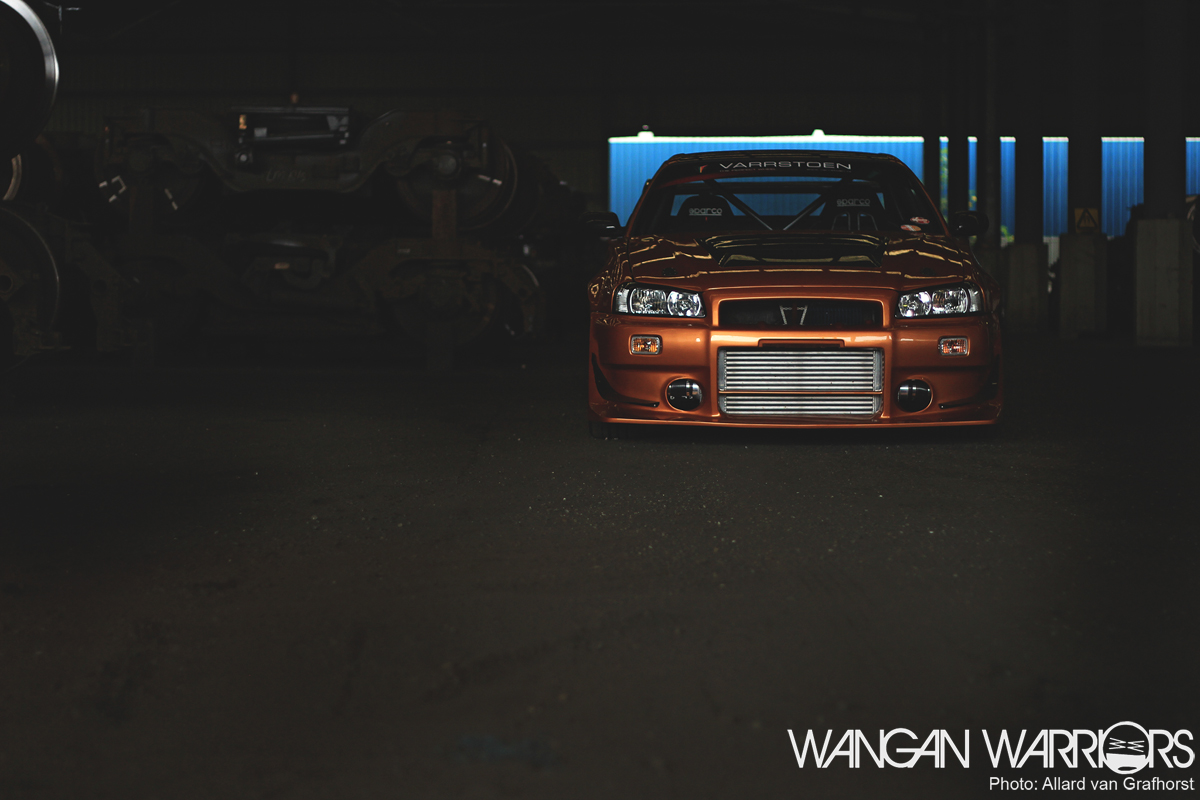 For some people this car may raise a few eyebrows when it comes to aesthetics.
From the front you have that really aggressive looking R34 nose mated to a C-west bumper and Nismo Omori hood… 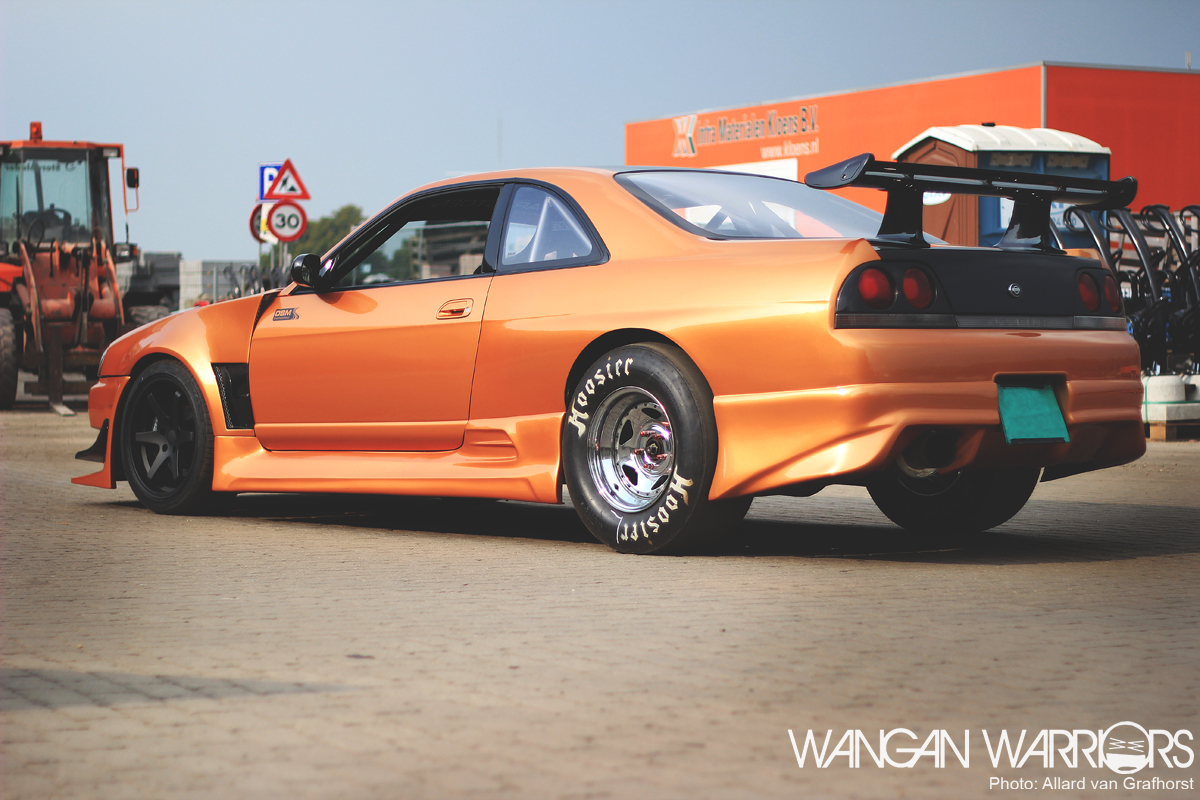 … while the sides are mated with Z-tune front and R33 GT-R rear fenders. To finish the exterior the owner, Thijs, opted for Bukake (Editors note; yes, I kid you not. For those who do not know what Bukake means in Japanese I suggest you use google. NSFW!) side skirts and rear bumper. And I almost forget the R34 rear wing to keep the R34 theme going. 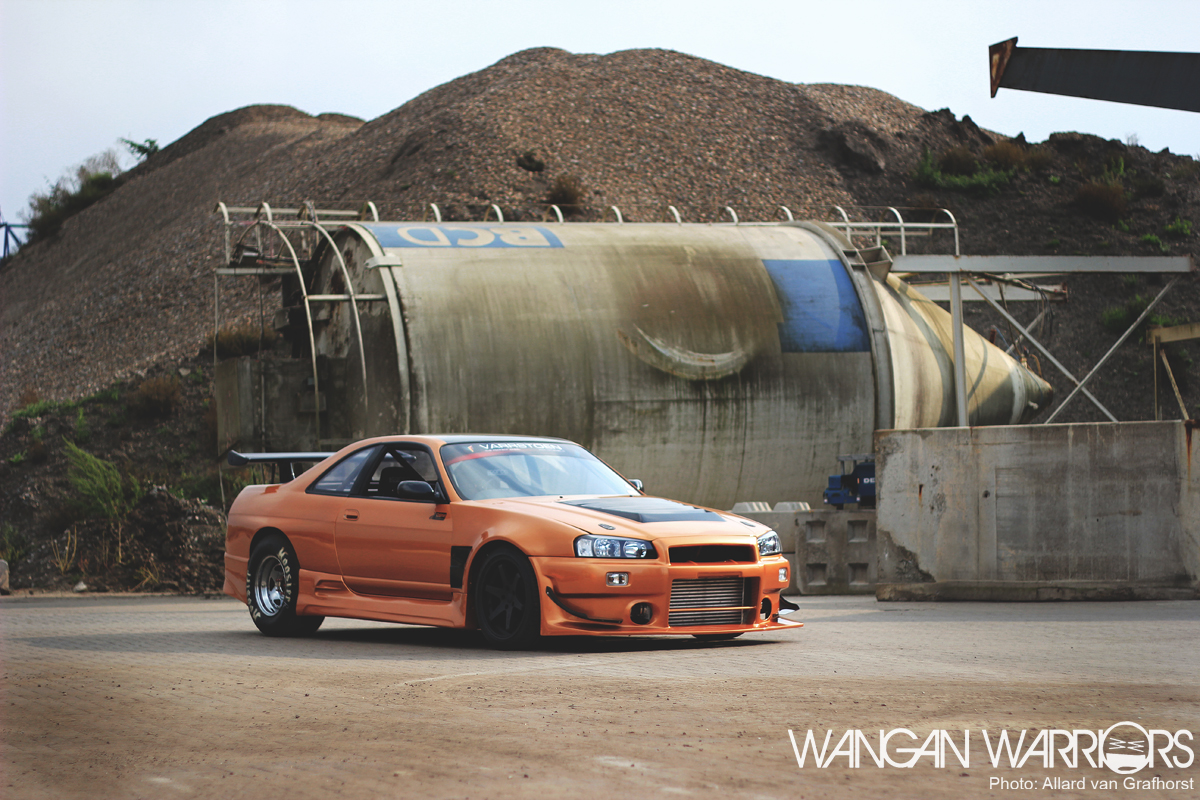 The complete exterior package may not be to everyone’s taste but to be honest, I dig it! More importantly, the owner digs it and that’s the most important thing. The complete car is build with only one thing in mind; to go fast! And well, have fun while doing so so I guess it’s build with two things in mind. 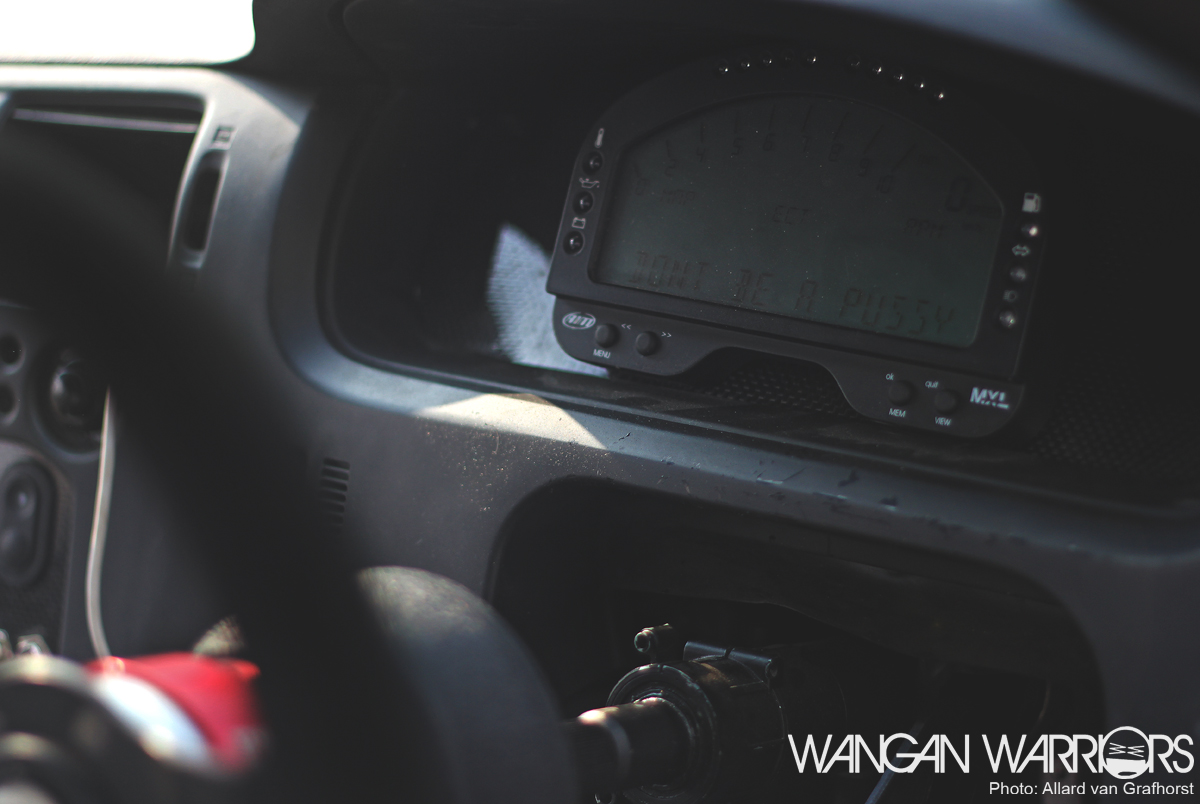 So all in all I think the car works as a complete package.
Performance – Check!
Looks – Check!
Insanity level over 9000 – Check!

And for all of you folks out there that are building cars, racing cars or just enjoying car life in general, I’ll end this article with the same words Jeroen said to me at the beginning of this adventure. “Don’t be a p*ssy!”

*Complete spec list at the bottom of this article, after the BONUS IMAGES: 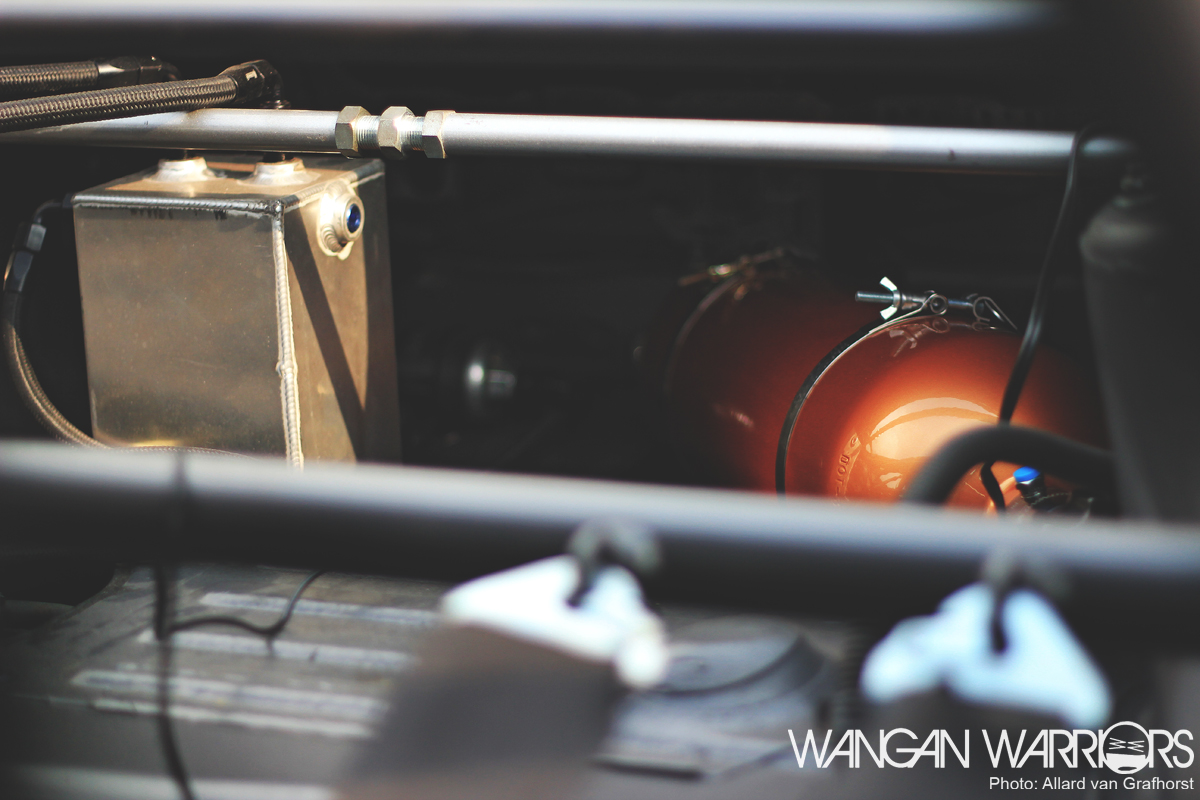 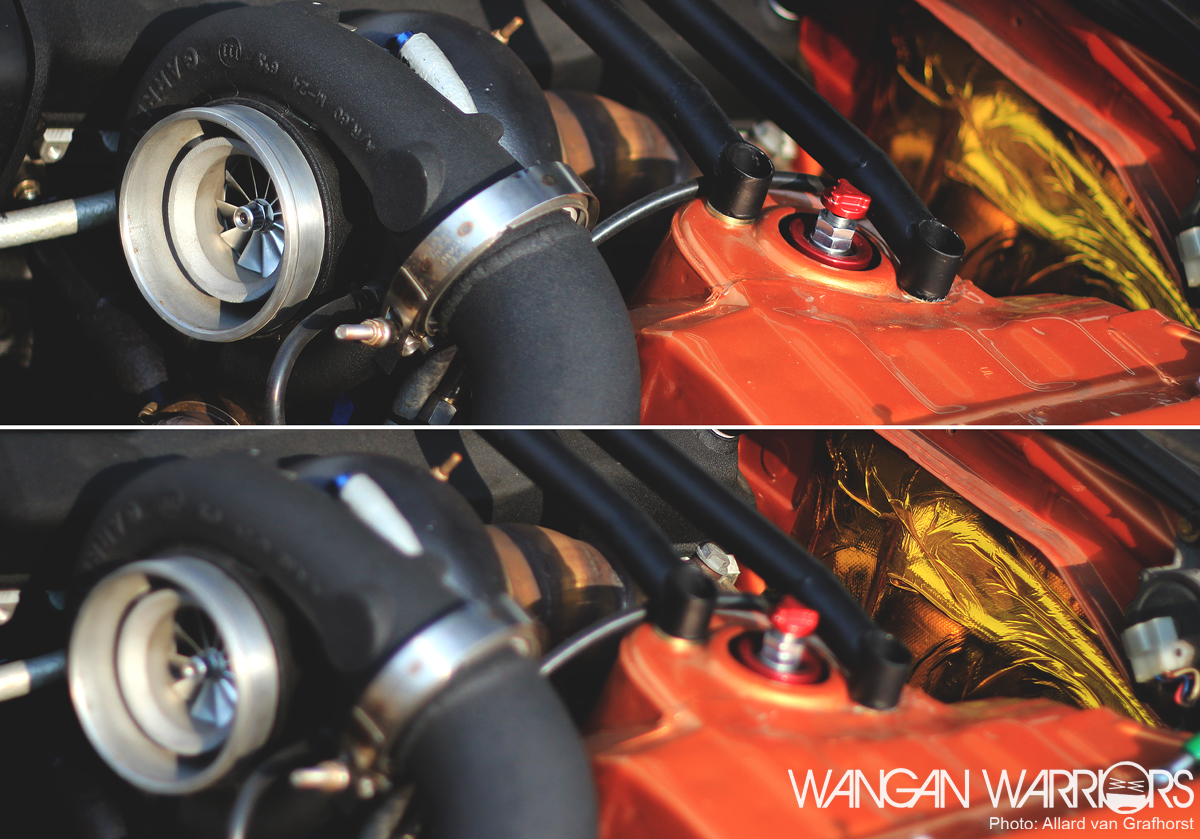 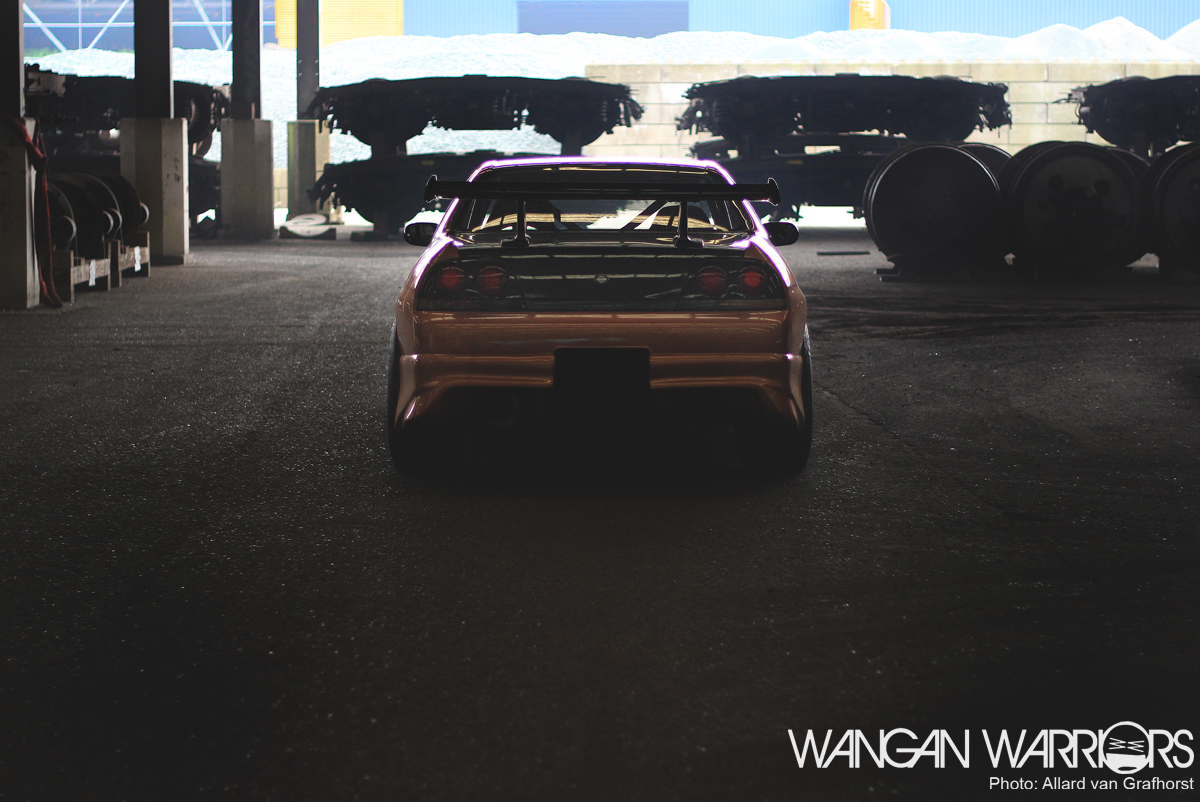