Everybody knows how some ideas are born. You’re having an “aha” moment in the shower, or someone has a bright moment after a beer too many at a BBQ. And some, most?, of those ideas turn out to be pretty stupid. That’s what I thought first when a bunch of friends of mine came up with a new plan. 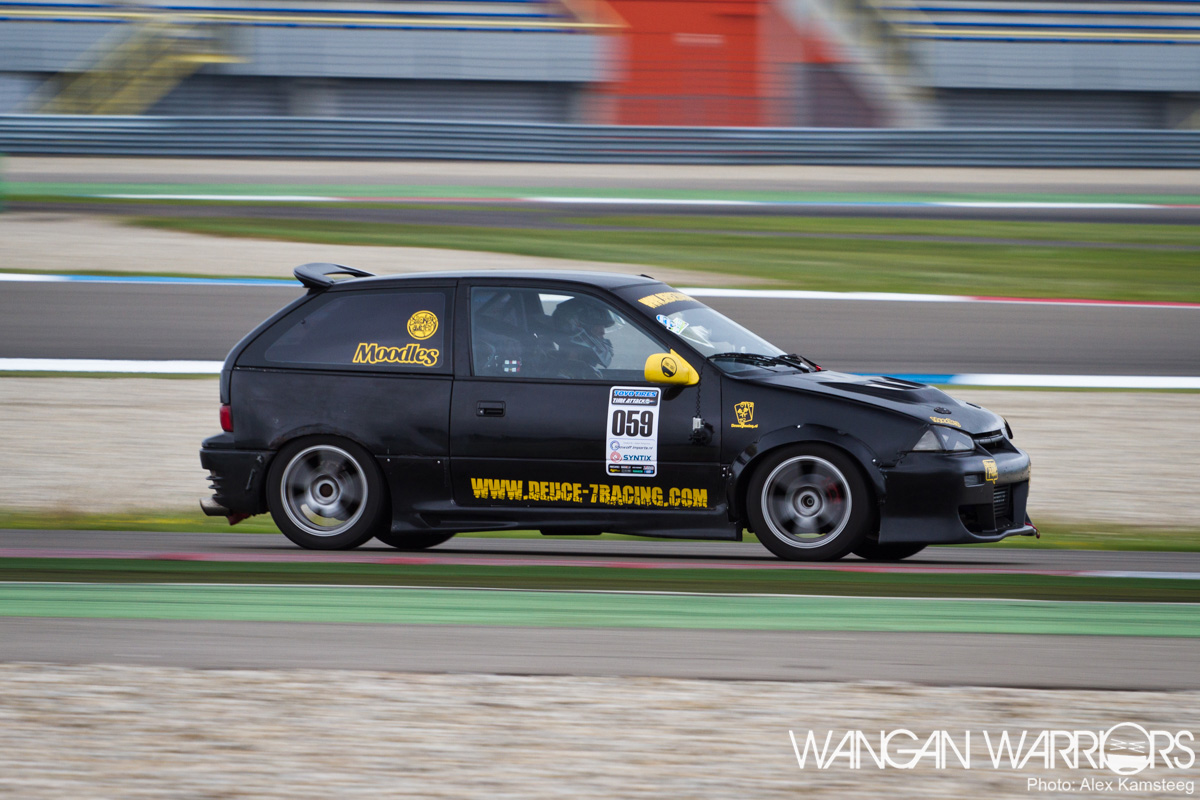 I have no idea who came up with it originally, but suddenly the whole plan was in full motion. A lot of my friends campaigned in the Dutch Time Attack championship at one time or another, I even featured William’s Yaris and another guy’s Suzuki Baleno. A lot of other people from the TA world were contacted and before I know it a sizable team was assembled. With people from all over the country and from all disciplined it’s a diverse team too. 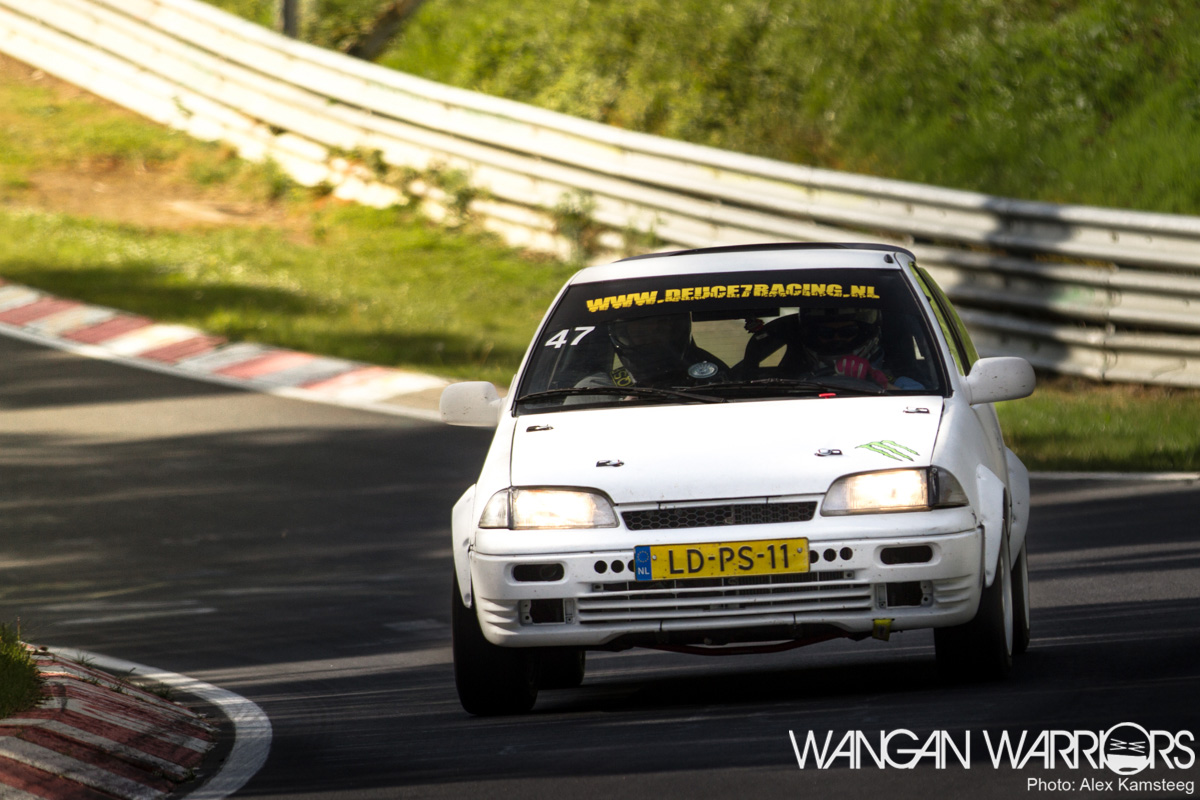 The choice of the car was a simple one. One of the guys drives a Rover with the associated famous English reliability. Another one had a turbo’d Mazda 323F, with conrods the shape of a banana. A rotary powered RX7 was quickly ruled out due to the costs, but the same guys who I believe came up with the plan were already racing with a Suzuki Swift. Two, to be precise. An Mk1 GTI which is the most reliable race car I’ve ever seen and a Mk3 which went through so much reincarnations I lost count. It was quickly decided to turn the Mk3 from a Time Attack car and Nürburgring tool into a full fledged racer. 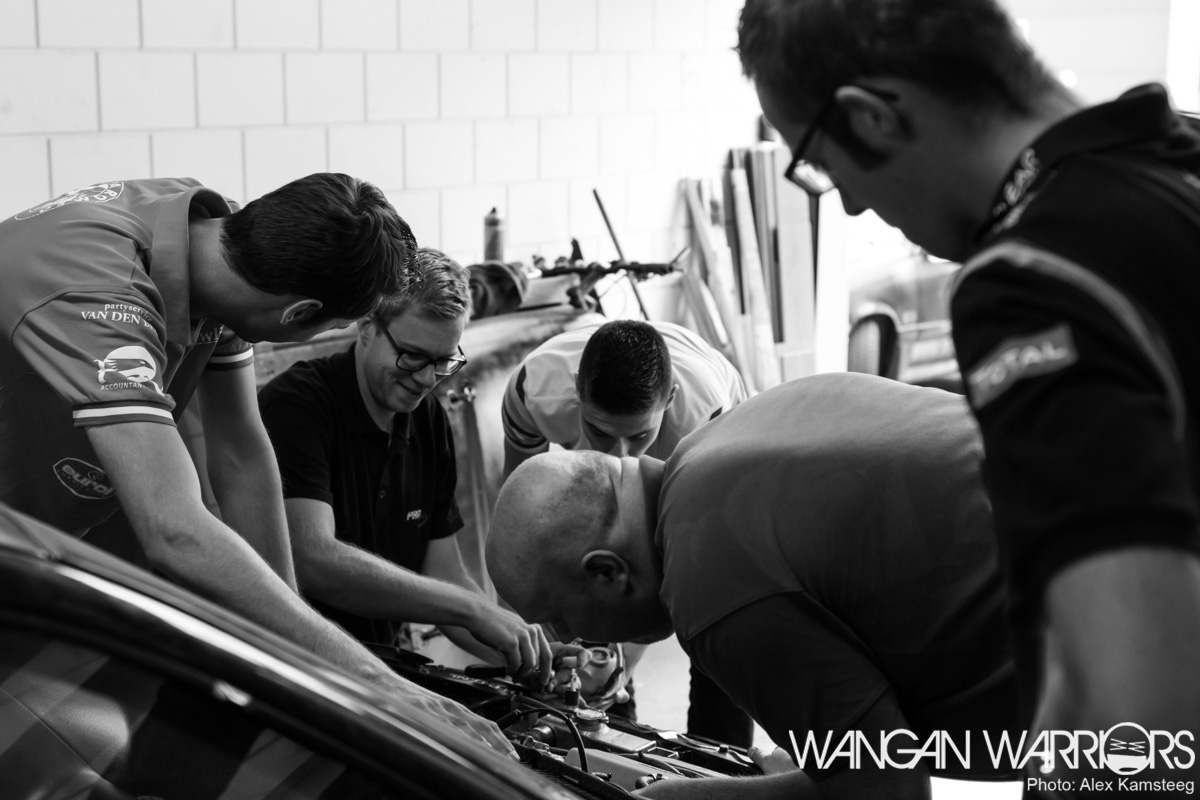 And what is the plan, you ask? Driving a 24 hour endurance race. And not eventually, some day, after a lot of practice and stuff but like, this year. And to make it even more challenging, the race is on a track were none of them have ever driven. So, the pressure was on, clearly. A frantic time of getting racing licenses, getting physically ready and of course preparing the car began.

From early on it was decided to approach is as just a bunch of amateurs having fun, with the goal of just trying to finish the race. We had tons of barbecues, meetings and the guy who makes the commercials for the Dutch armed forces even made the cheesiest promo movie you’ve ever seen. 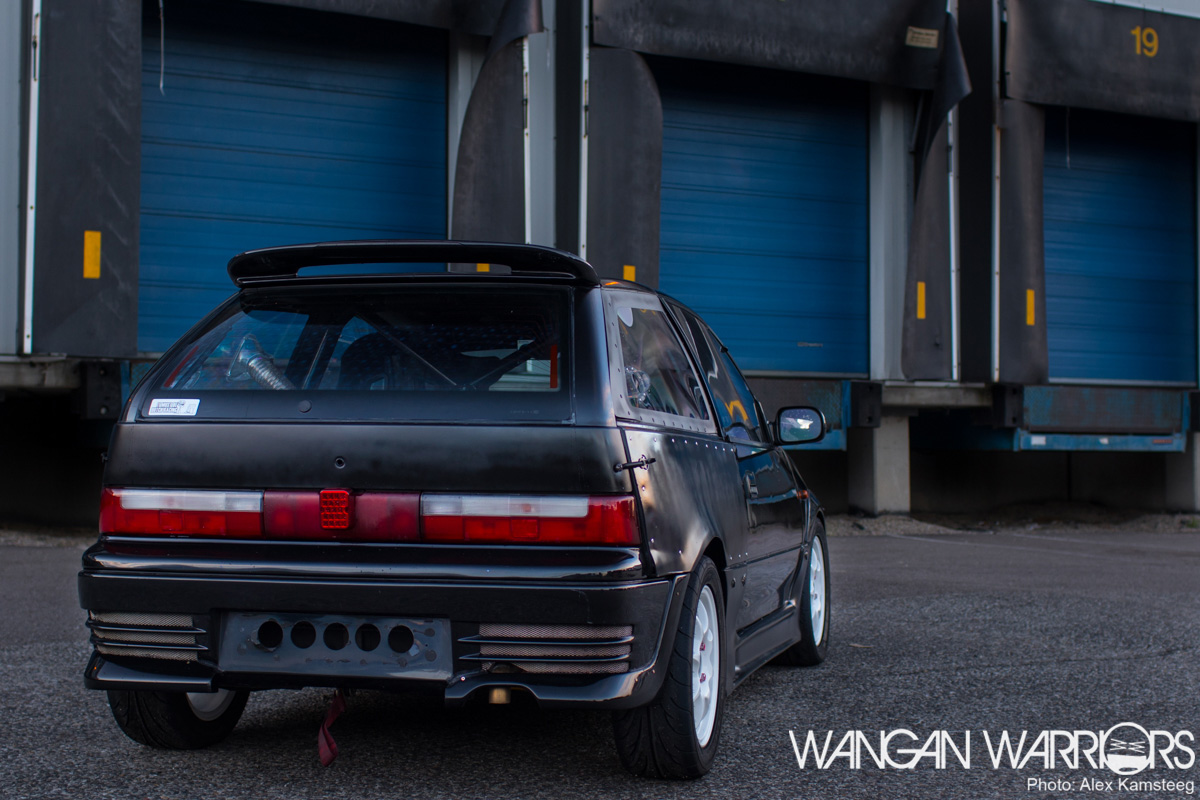 But the car had to be prepared too. And well, building a car for an endurance race is just something else than building one for 20 minutes long Time Attack sessions. Jan & Remco, the Swift drivers, stripped it down and with help from the other guys gave it a thorough rebuild. Determined to build a car that can the take the punishment of 24 hours door to door racing they set about pouring countless days and nights into the car. 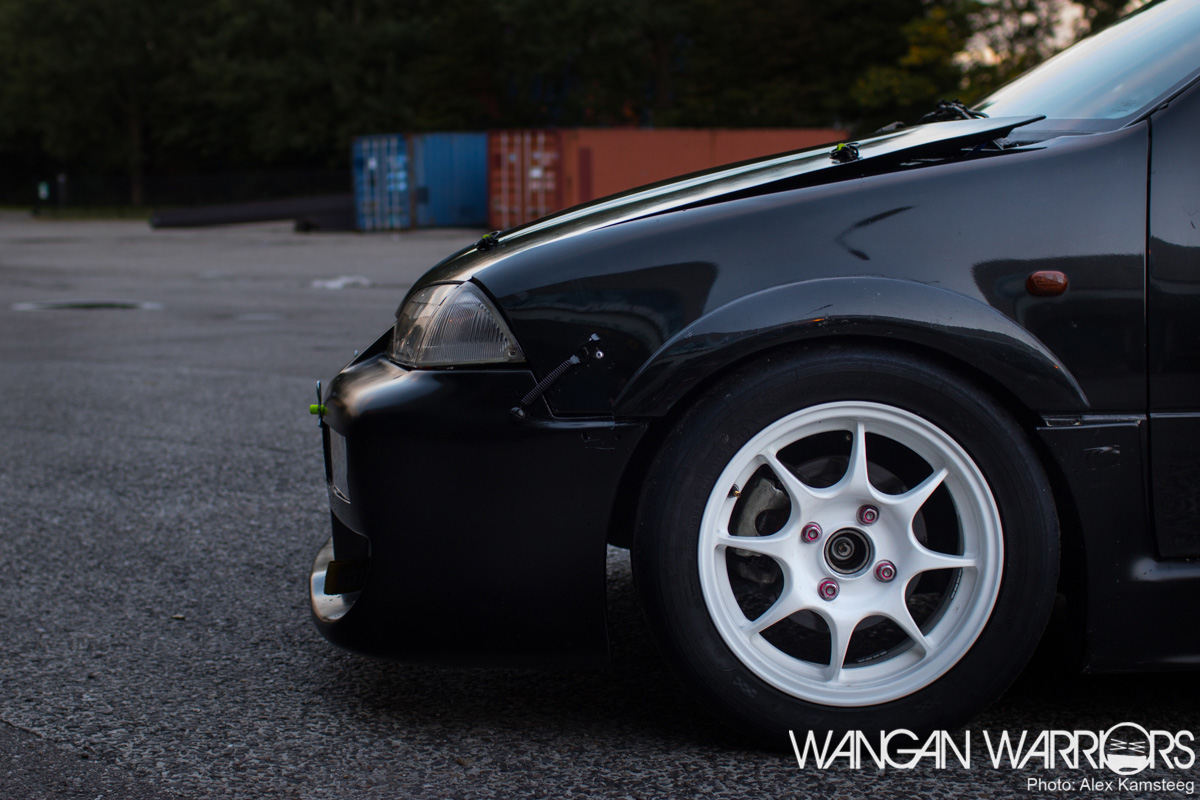 A lot of body parts were replaced or freshened up. Gone are the wide home-made fender flares. They were replaced with smaller ones on stock fenders that look awesome if you ask me. The wheels are a set of white 15″‘s originally from a Honda Integra. They’re very light to reduce unsprung weight and are wrapped in sticky semi slicks. A whole assortment of braces, strut bars, poly bushes and other bits and pieces are fitted to increase grip and improve the handling. Braking is handled by Carbon Lorraine pads in upgraded calipers with larger grooved discs. 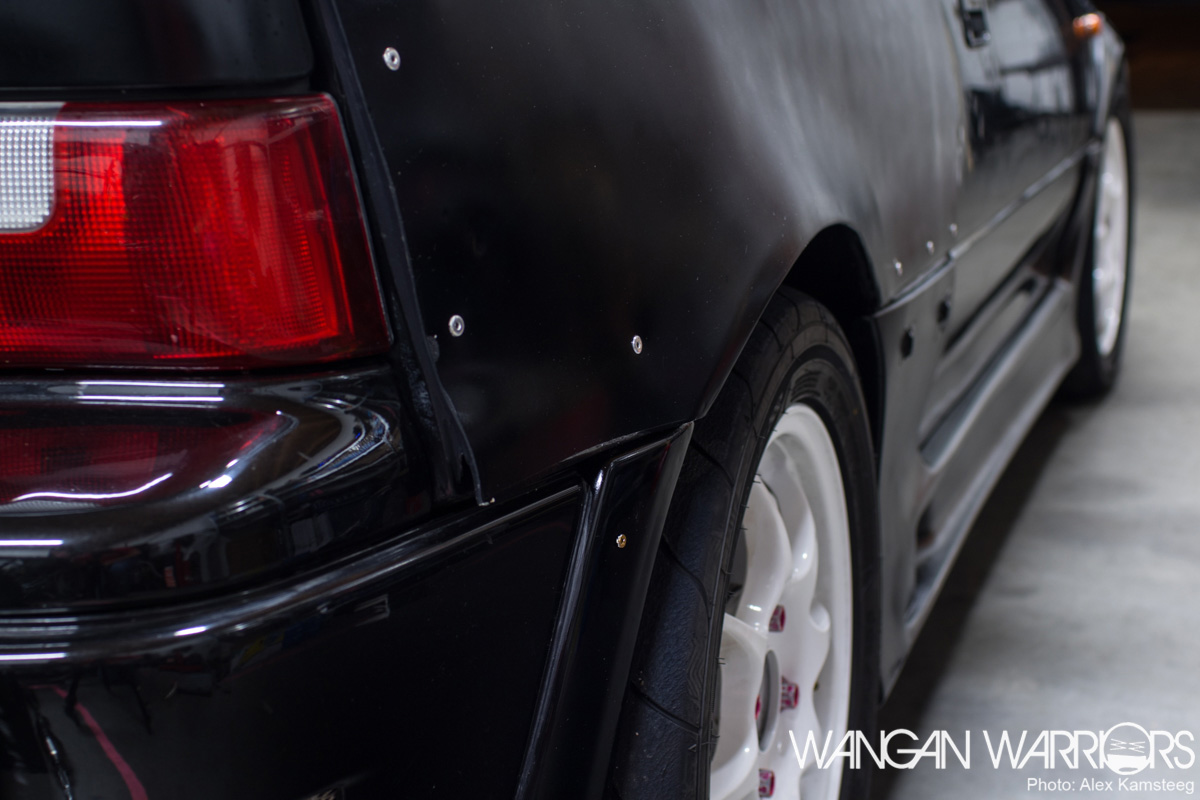 With Colin Chapman’s mantra “to add speed, add lightness” in mind the rear steel fenders were cut out and ruthlessly relegated to the trash bin. From a VLN certified donor chassis with widened rear fenders the guys picked up in Luxembourg molds were taken and a set of widebody polyester rear panels were fabricated. 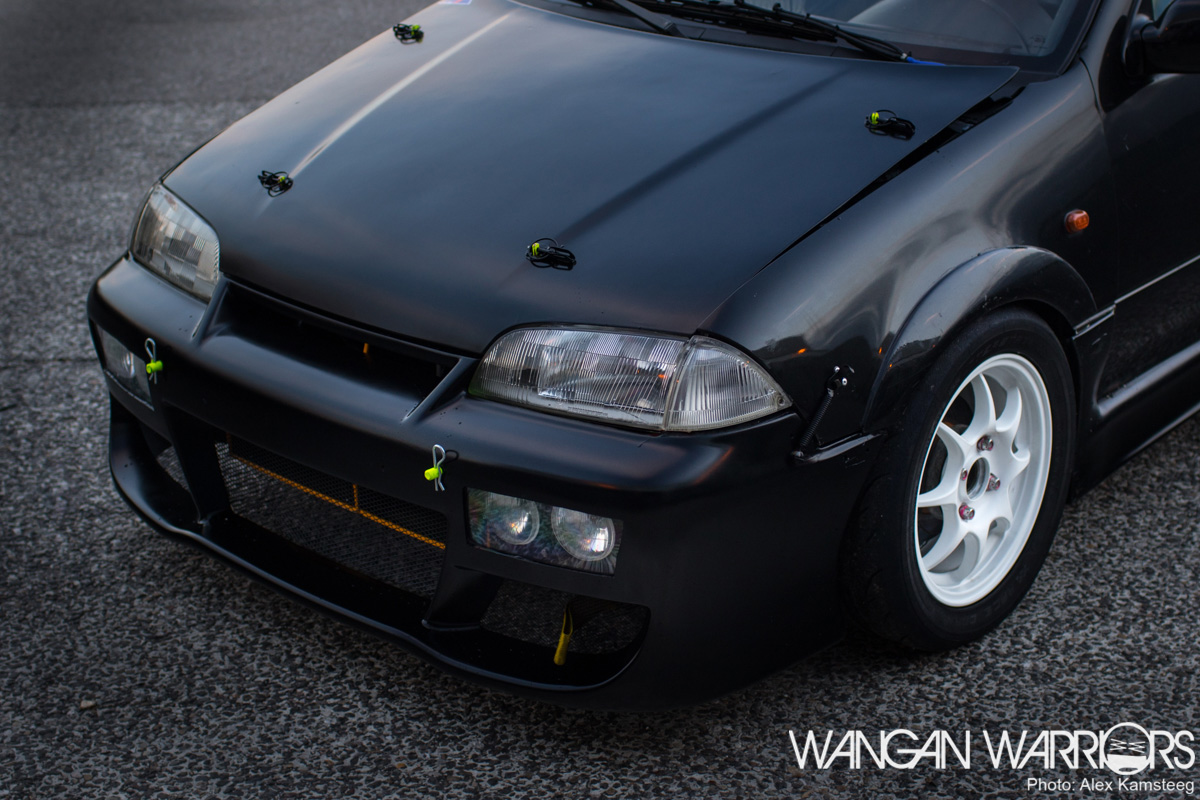 The stock bonnet was quickly discarded too. It was deemed too heavy and a replacement was quickly created by the guys. The inner frame was retained, albeit with as much metal removed as possible, and a new outer skin from polyester and carbon fibre was made. The stock locking mechanism was removed and replaced by a quartet of hoodpins. Of course the hinges had to go too. Just removing the now very light bonnet makes working on the engine a lot easier, right? 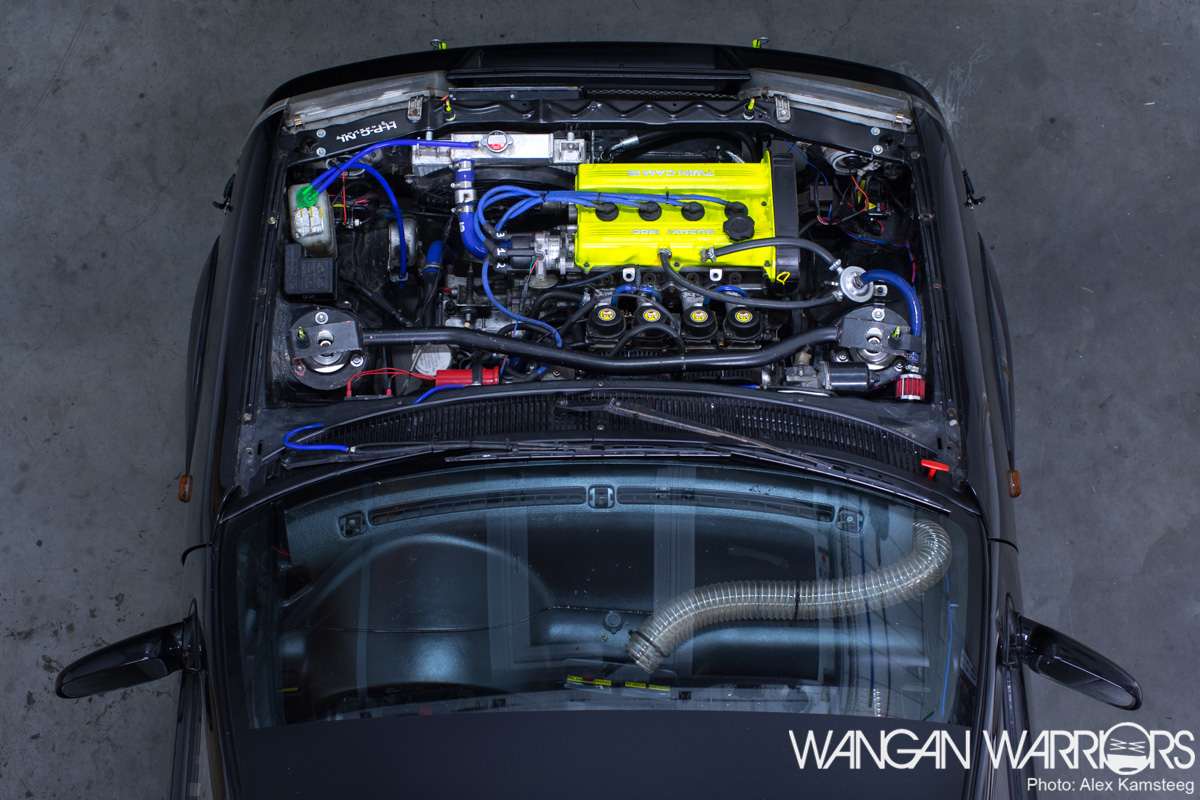 On the transmission side a gearbox was freshly rebuild by a friend of the guys. For much needed traction when accelerating out of corners a limited slip differential was bought and fitted. The old gearbox, with a Phantom Grip in it, is fully checked and is now demoted to being one of the spares. A few sets of axles were refurbished with new CV joints and rubbers too. And the old clutch, worn after years of track duty, was replaced with a Clutchmasters one. 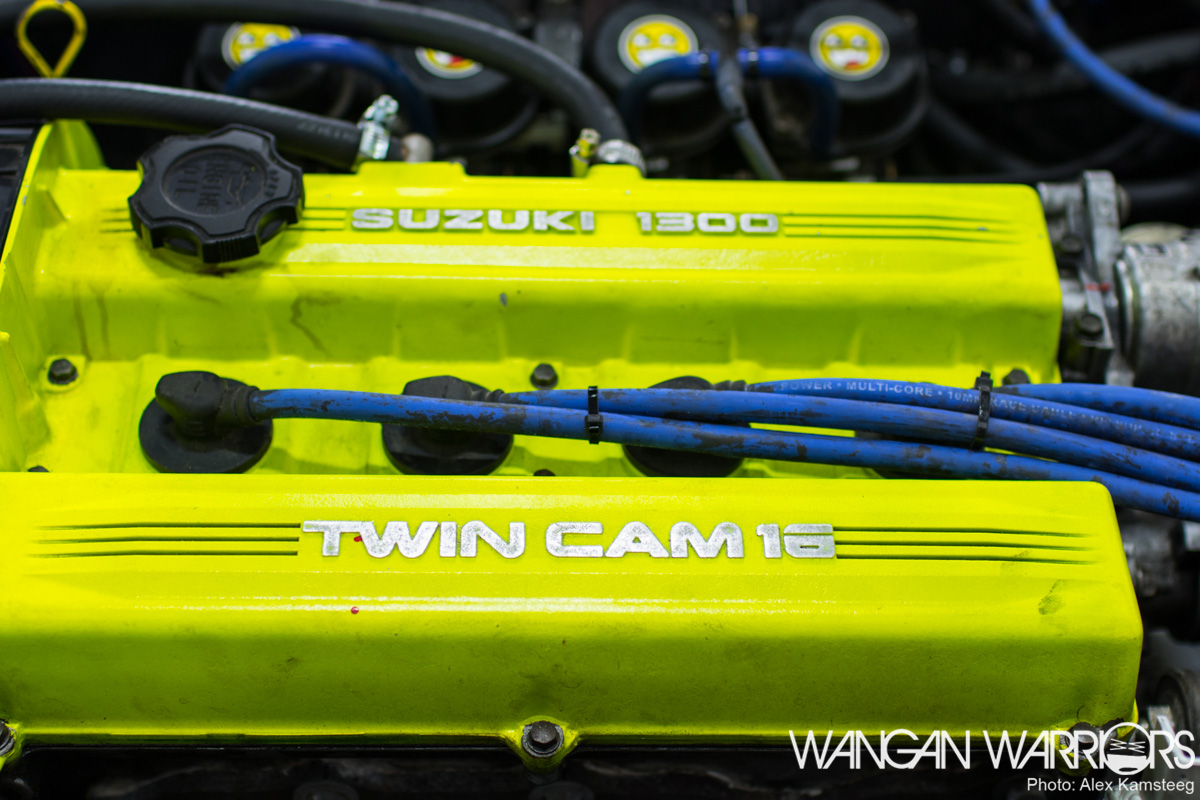 The engine is still the the 13B Suzuki originally fitted to the GTI’s. This car started it’s racing car with a cute little turbo which made decent power, but reliability issues plagued the car at every outing. So, a few years ago the N/A route was taken and the guys never looked back. The lower weight and reduced mechanical complexity are compelling, but the increased reliability sealed the deal. 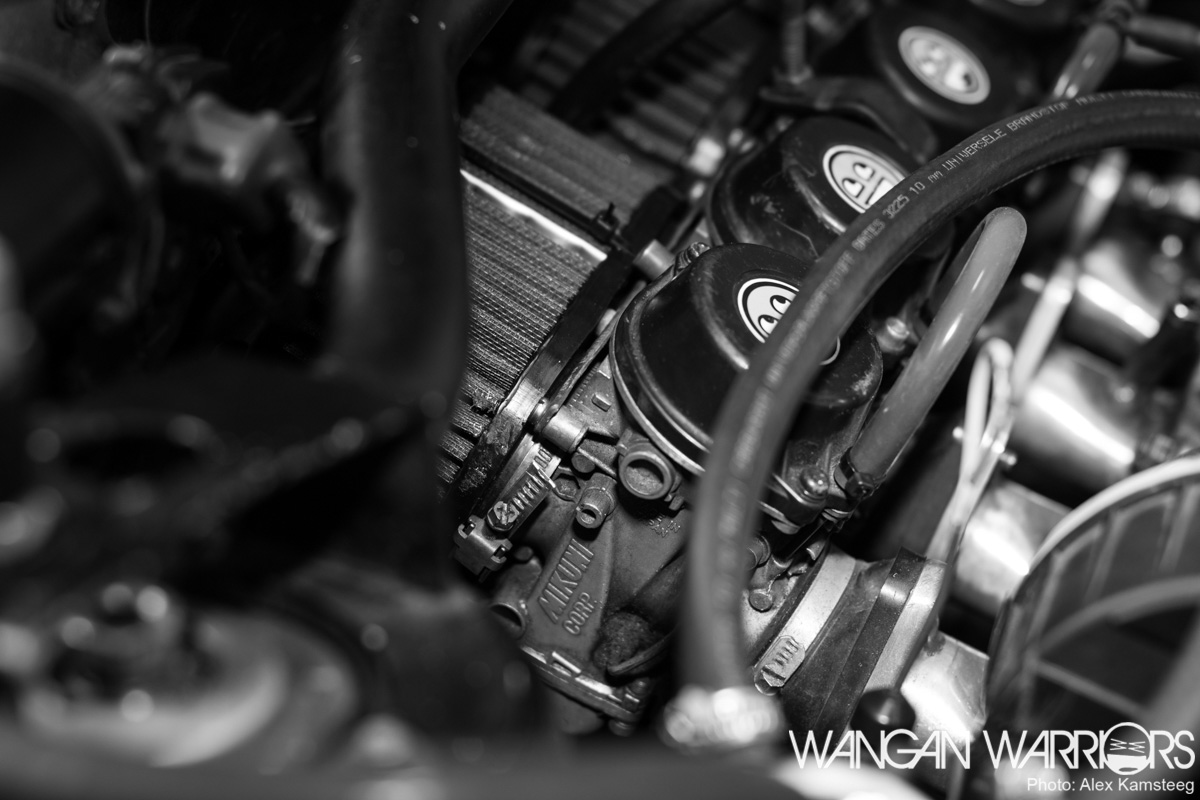 This engine is fitted with a set of more aggressive cams for more top-end power. They’re a fair deal lighter than the stock ones too, with almost a kilogram saved from every cam. The electronic fuel injection was removed and instead a set of Mikuni motorcycle carbs was bolted to the head. The intake sound is something from automotive heaven now and after a bit of massaging from a carb expert this little engine now produces a little over 120hp at the crank. Not much, but with a car weighing barely over 700 kilograms race ready there’s nothing to be ashamed off. 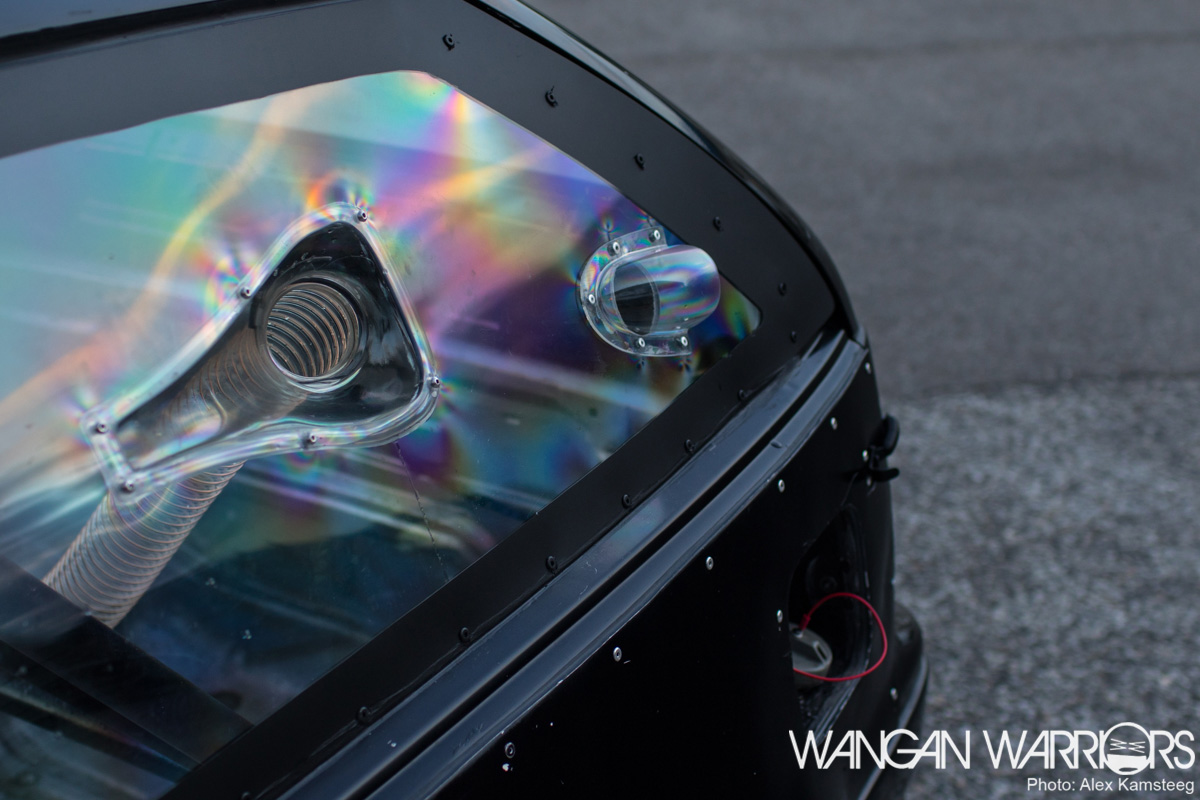 All windows on the sides were replaced with lightweight Lexan. The one in the drivers side door has a little slide for fresh air and in the rear on both sides little extractors were fitted. The lower air pressure behind the car sucks hot air right out of the car, which helps in making it a lot more comfortable inside the car. 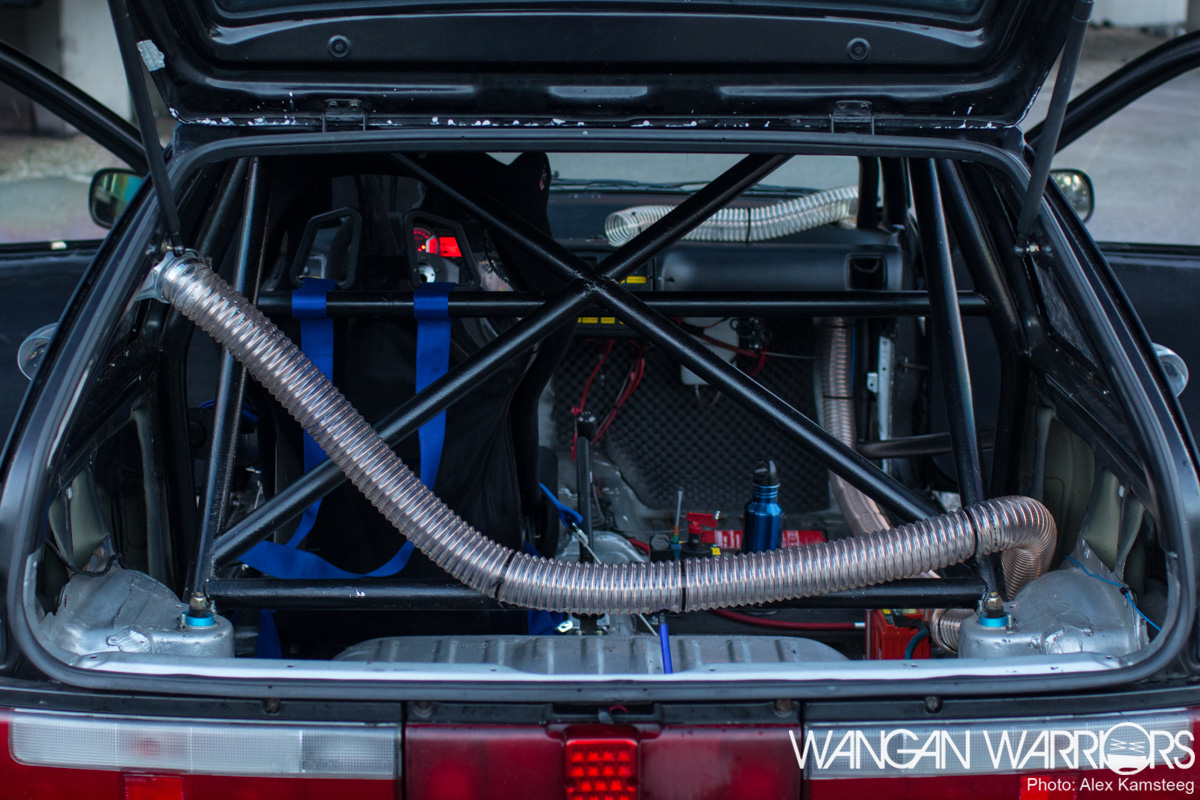 The NACA duct draws in cool air and is attached to a hose to bring some more cool air towards the driver. The hose is draped over a roll cage already fitted to the car, but it was brought up to spec to comply with the rulebook. It offers full protection front and back and side impact protection too. Of course reinforcing the twenty years old chassis was a much welcome bonus. 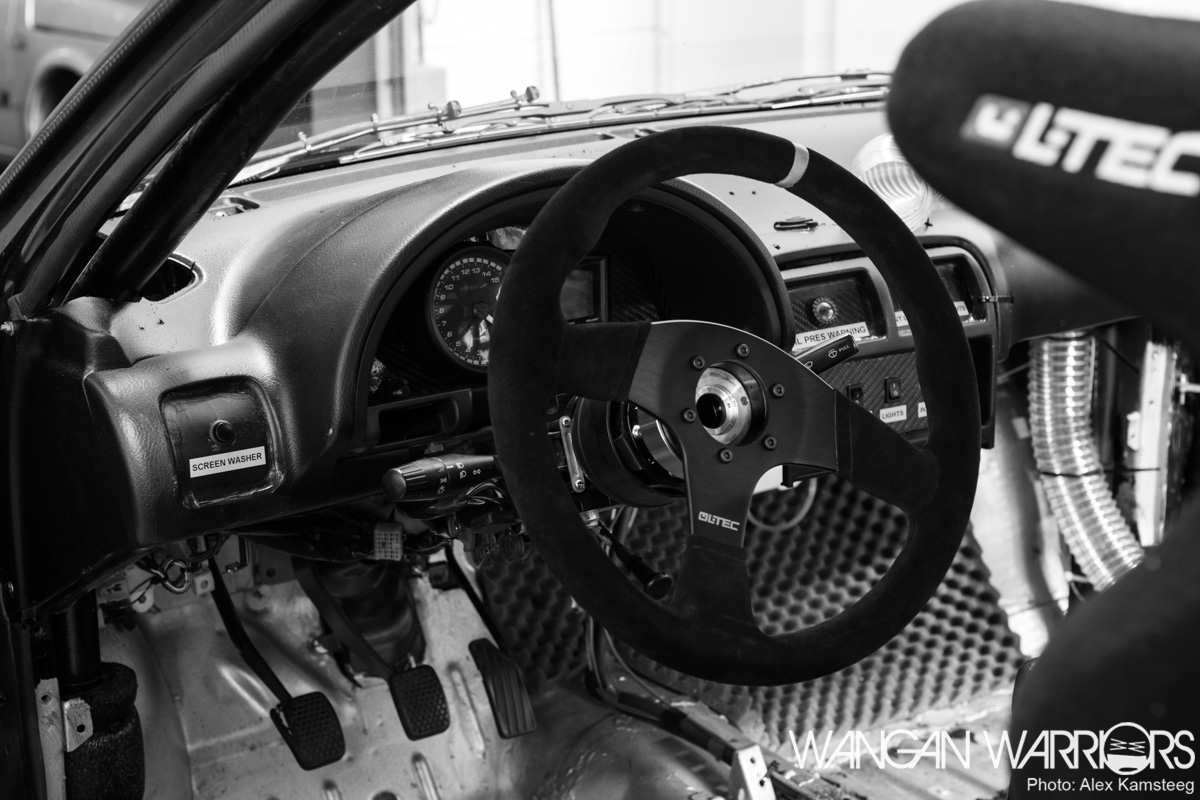 Further to the front a host of new goodies from LTEC was fitted. A new steering wheel with a nice and thick rim, seat belts and a new bucket seat. Because the four drivers are of all sizes and shapes a seat was sourced that was big and comfortable for everyone, with custom padding and cushions to make sure everyone sits just right. When you’re driving 80 minute sessions for 24 hours a sore back can seriously ruin your laptimes after all. 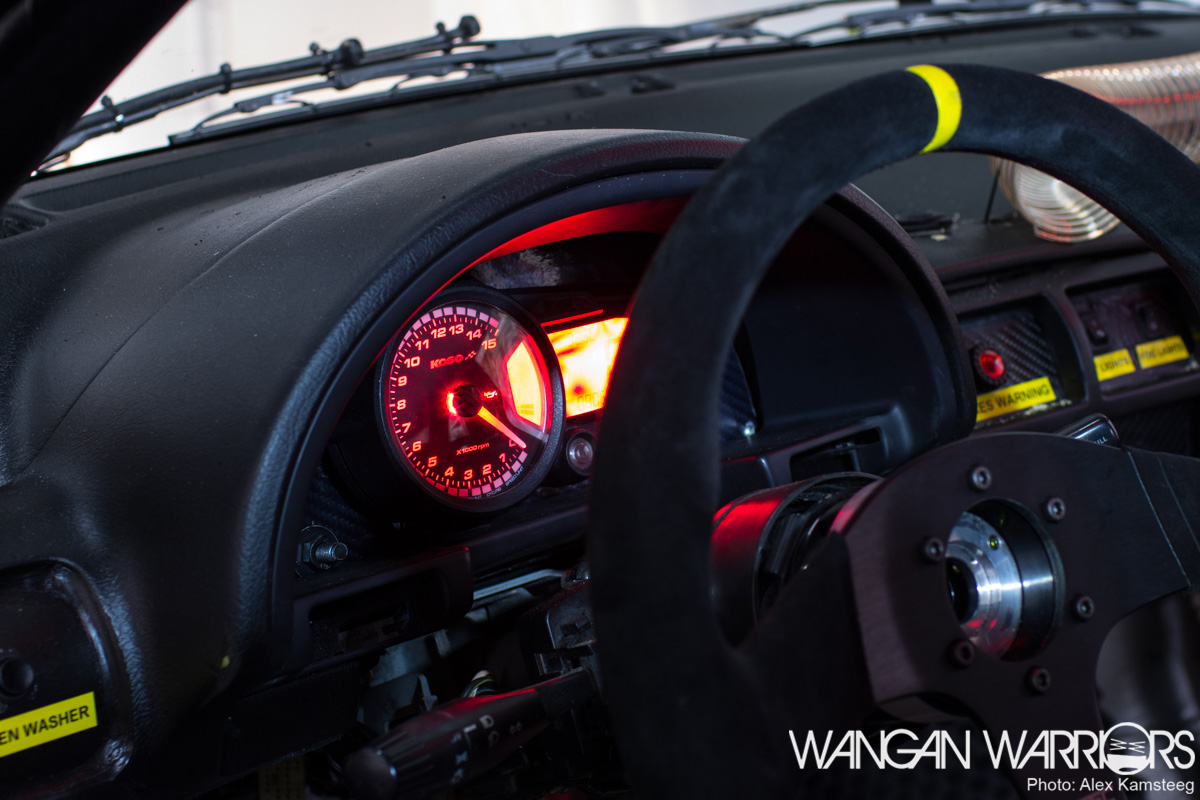 The stock gauges were removed, with a custom carbon fibre panel fitted to block off the hole. A Koso motorcycle cluster was sourced, with readouts for oil & water temperature and a large tacho. Having all the information right in front of the drivers helps them keeping an eye out on the vitals without cluttering the interior with lots of gauges everywhere. 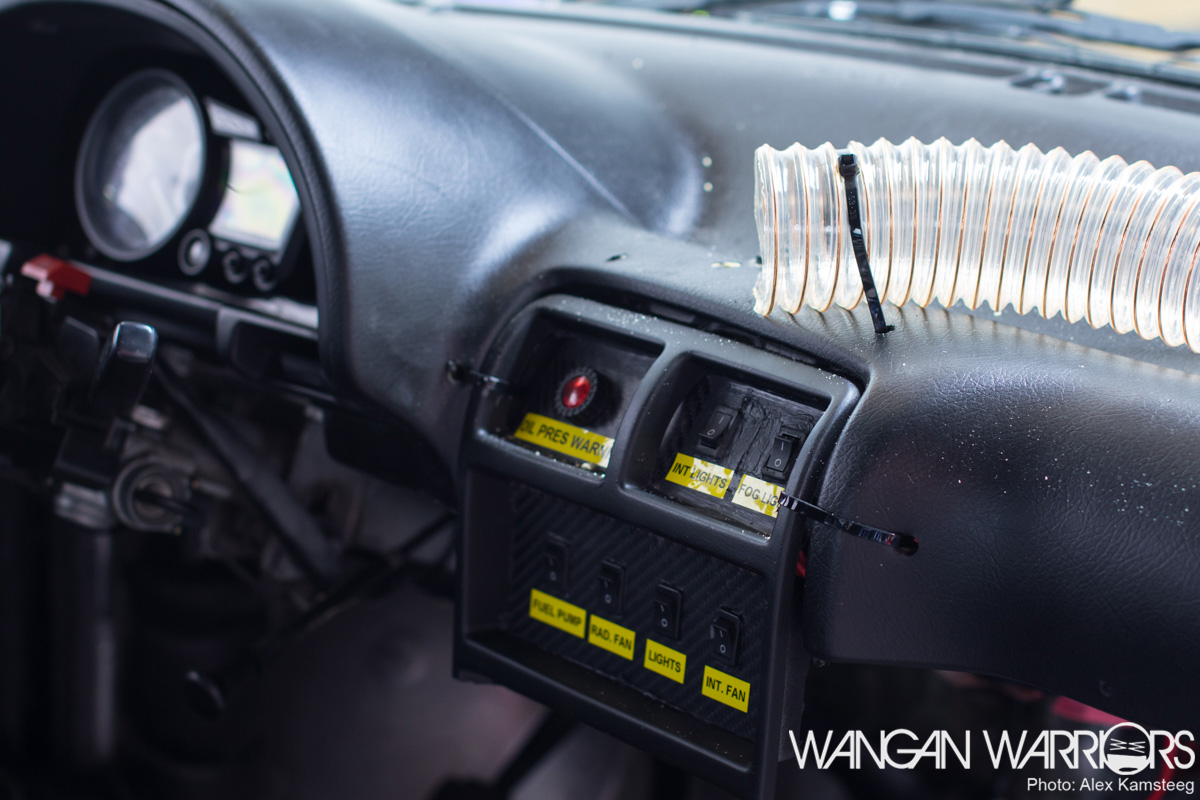 William, the guy who owns the Yaris I mentioned earlier, is a wizard with wiring and electricity. He got the job of fixing the wiring, replacing almost everything and making it as reliable as possible. He fitted a bunch of switches & fuses, made sure all the sensors for the gauges were correctly wired up and even fitted some red interior lighting to aid with driver changes without messing up a driver’s night vision. A lot of parts are tied down into place with tie-wraps to facilitate quick repairs, instead of screws that always get lost of are tightened just a bit too far. 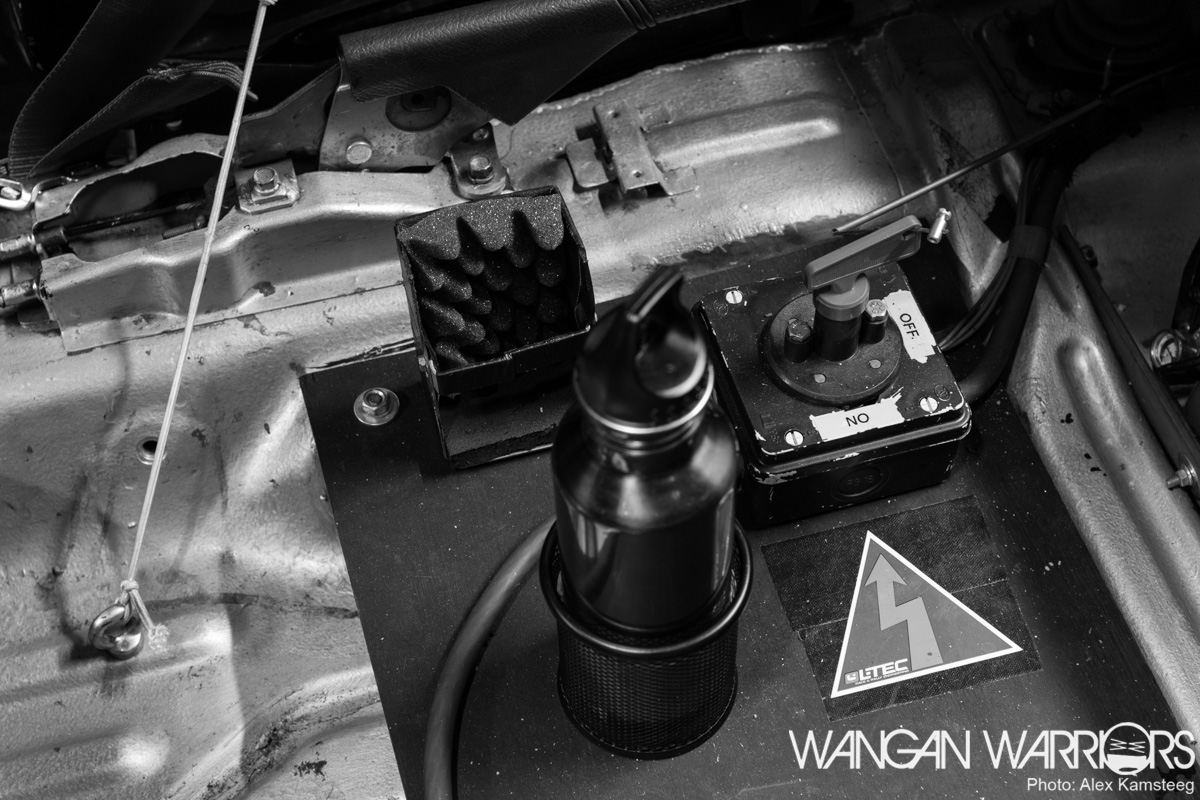 Next to the drivers seat a carbon panel houses a few other important bits and pieces. The main switch for the electrical systems, with another one on a clearly marked location on the outside of the car. To prevent dehydration a holder for thermos flasks is fitted and another one is for the radio. When the drivers steps into the car he can quickly put his bottle and radio into the holders before strapping himself in. 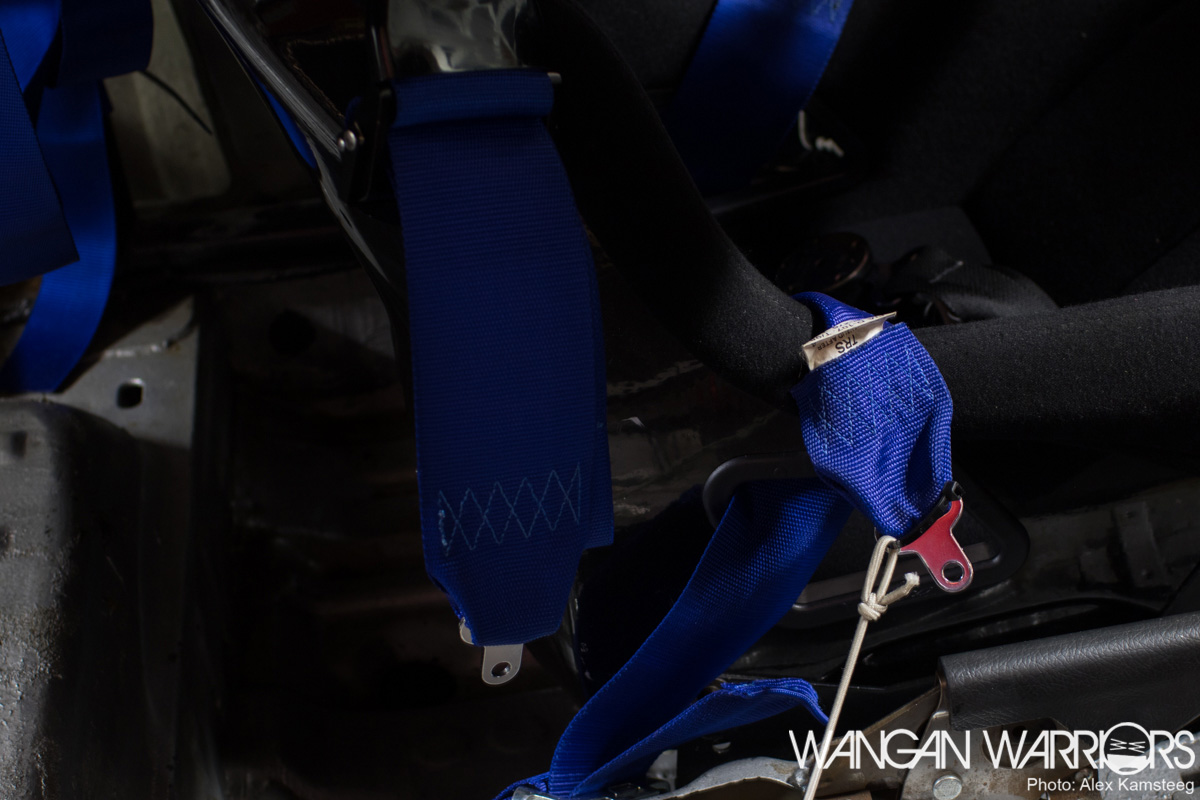 A pair of bungee cords pulls the side straps away when the driver unlocks the strap. This helps with getting out of the car, but more importantly it helps his replacement. The new driver never has to look for were the side straps are, which is very hard with a HANS device and helmet on. Instead the straps are always pulled to the same place, so with a little bit of practice you can just grab them. 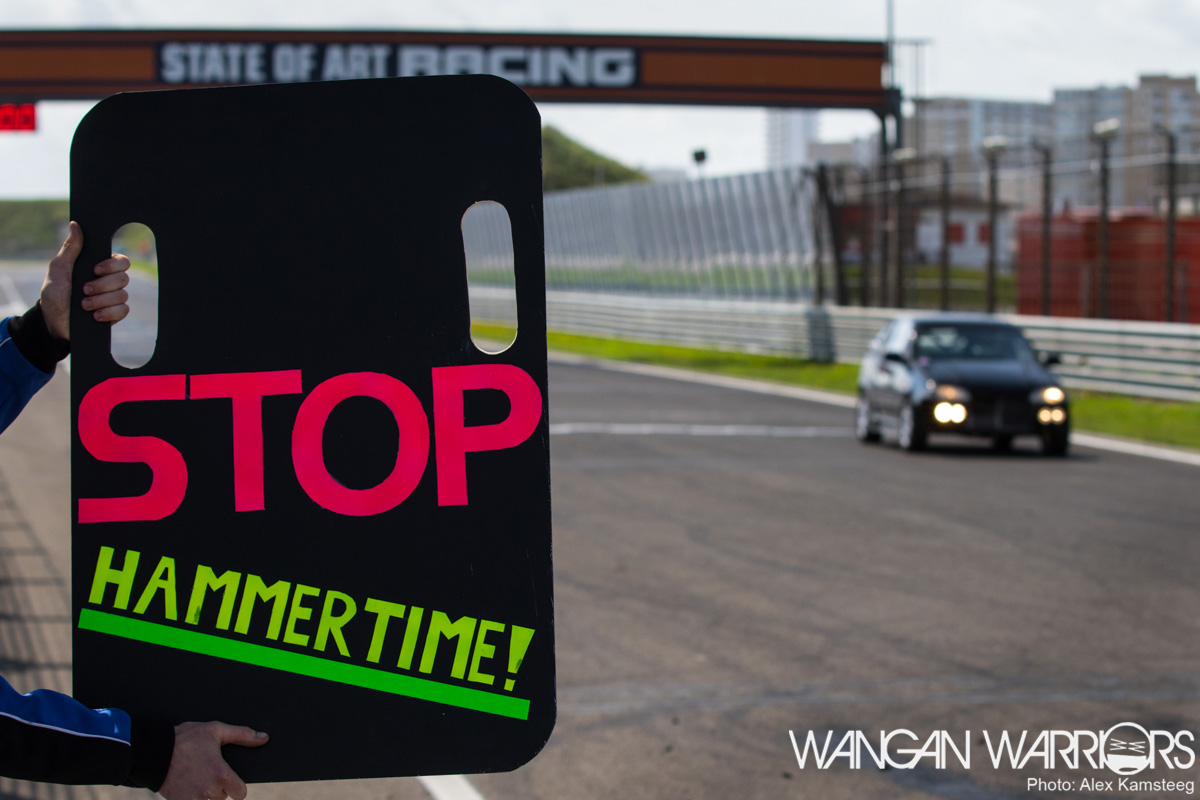 In the last couple of months the car had some track outings. The drivers could get acquainted with it driving on familiar race tracks and modifications could be tested. And of course, areas that needed improving were discovered. Small things like the pit board needing a border of reflective paint to make it more visible but also bigger ones like a piece of metal slowly grinding away the throttle cable. 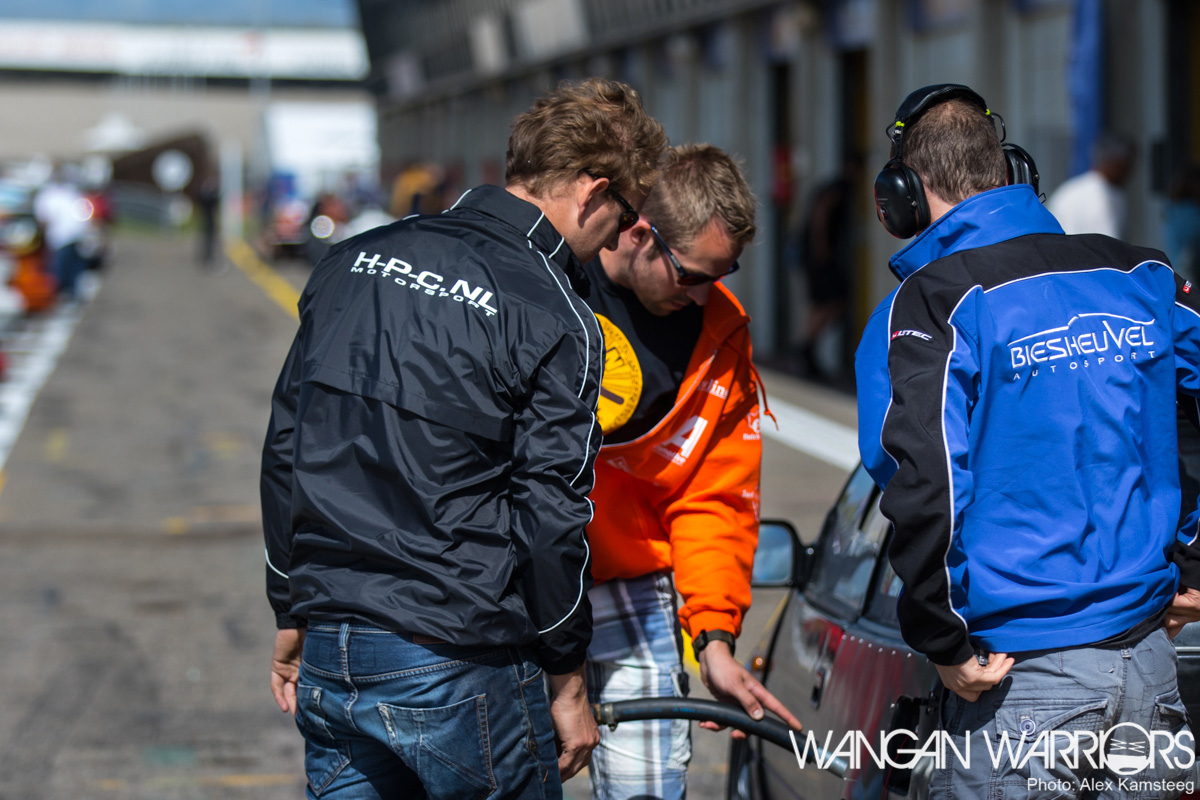 And all the other procedures and ideas could be tried too. Stuff like calculating how much fuel the car uses per hour, or practicing gassing it up. According to the rulebook only two people are allowed to work on the car at the same time and you can’t work on it when someone is filling it up. With loads pit stops in 24 hours doing everything as fast and as efficiently as possible can help you save considerable time. 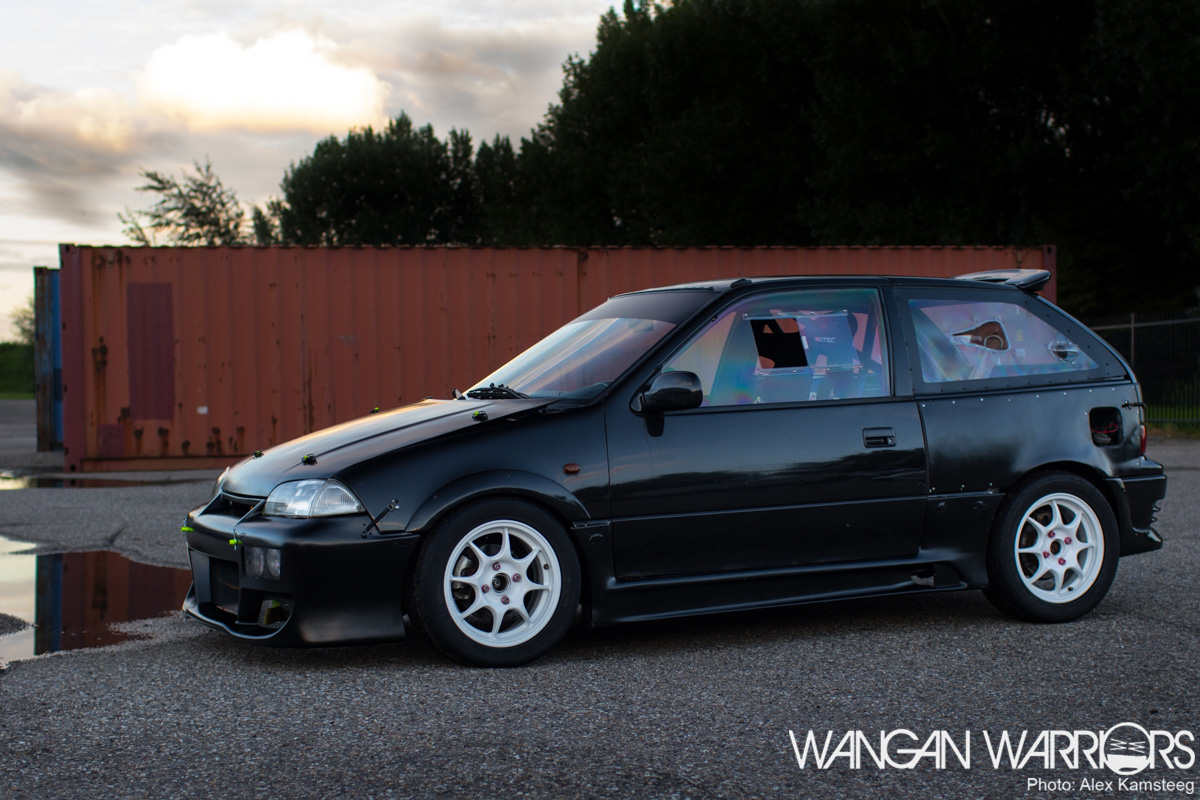 Just a few months ago this idea came up and since then everyone involved poured their hearts and souls into it to prepare for something that just seemed like a stupid idea when I first heard about it. They rebuild the car in a shed barely wider than the Swift is, with loads of custom parts and a clear goal in mind. On top of that a team with people from all over the country just sort of build itself and everyone is now stoked for the race. And I am too, so I’ll just tag along for the ride so I can keep you up to date. Wouldn’t it be cool to write an article about the race with a cool shot of that cute little Swift crossing the finish line in it?