Say what you want, but there is nothing more satisfying than seeing a classic like the 260Z Datsun being threated well and given a personal style. There is some true dedication, motivation and liveliness needed to rebuild a car from scratch and revise or renew every single part possible. I never had such sense of discipline for a car and that might sound weird from a (mainly) automotive photographer, but I’d rather capture other builders craftmanship. 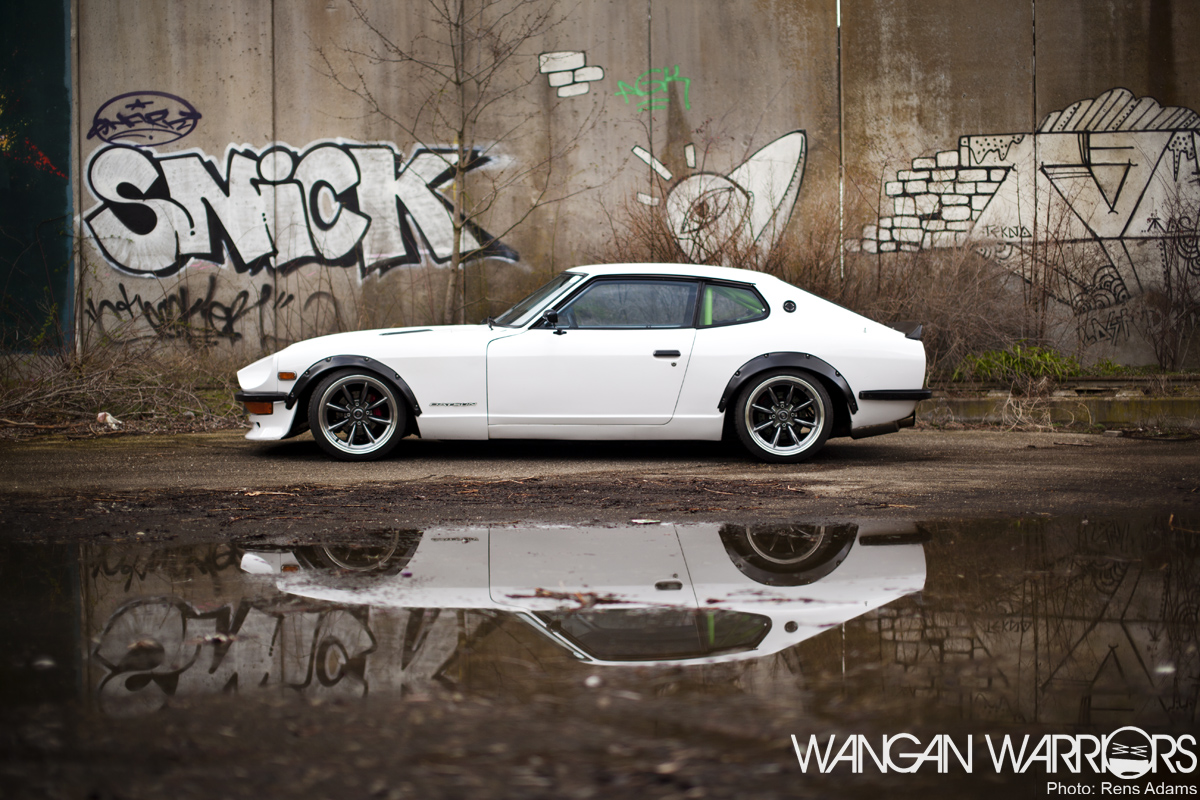 One of those people who does have that persistence and expertise to build a project car into something with a personal flavour and character is our good club friend Robin Sluijter. I remember when he started his project thread in 2011 on the Wangan Warriors Forum and noticed that he had some really impressive ideas and goals with his ’75 Fairlady. 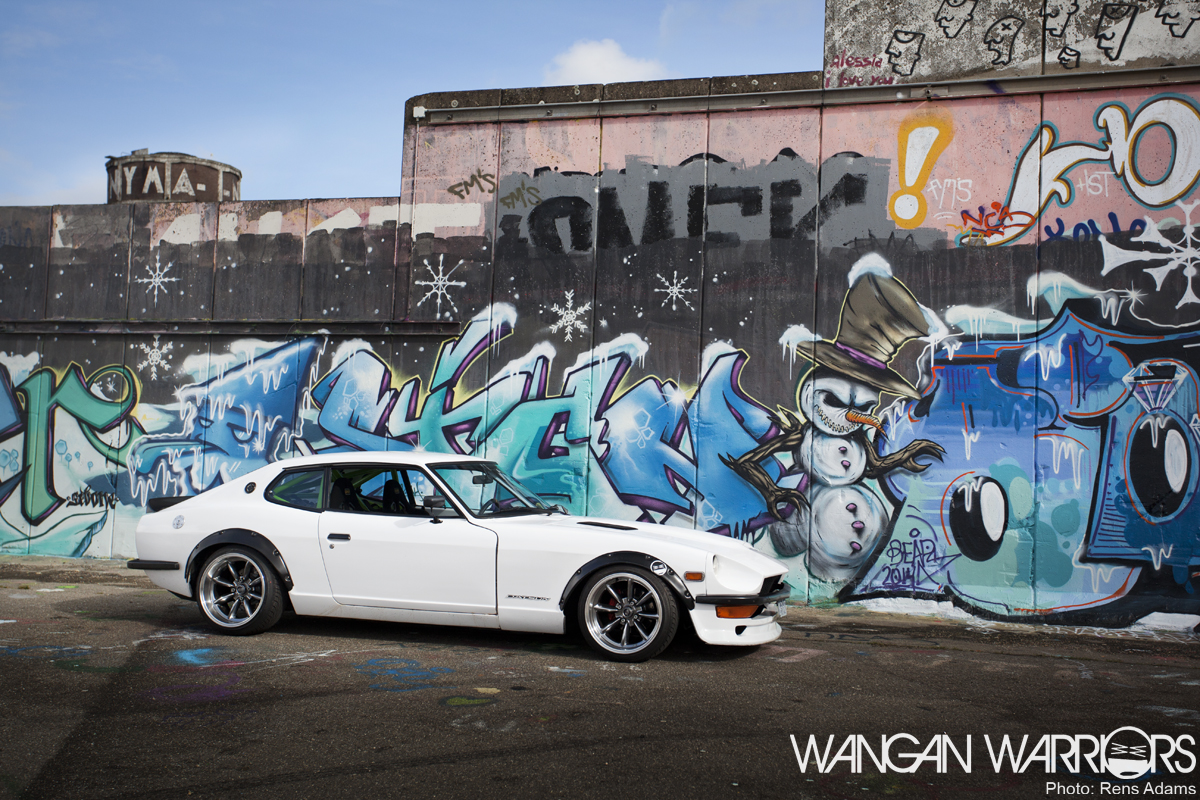 It has been a long road until this very point that I finally was able to complete a photoshoot of the Datsun. Even though Robin is a loyal visitor of our meets we’ve never managed to get the job done until we looked for a cool corner to shoot at the Vasim in Nijmegen where we will host our big event in April. When you enter the location you’ll see all the graffiti walls which are obvious to park your car in front and shoot a car. It’s no tough task to make it look cool. 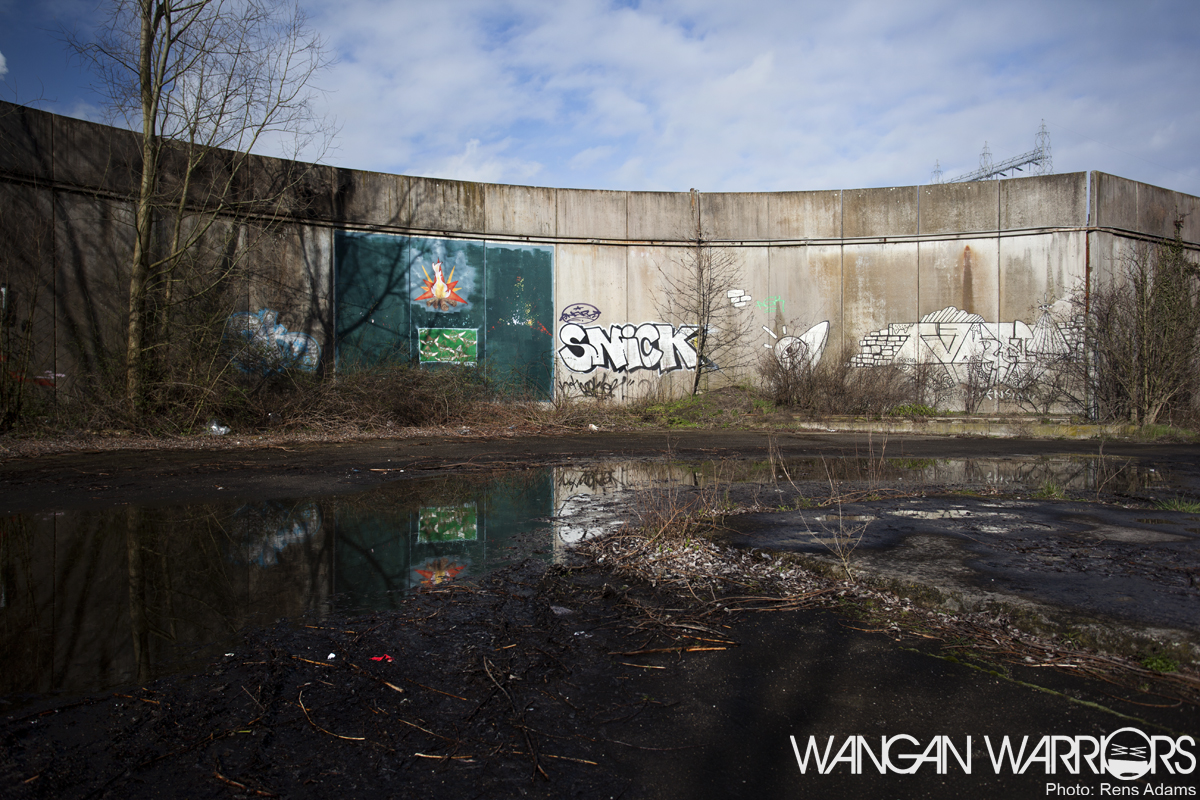 I sniffed around for a little bit less open spot to shoot and found out that behind the graffiti walls was a cool space to work with. For me it was a little bit more fun to capture various compositions and not having the same background every single shot. Luckily we had beautiful weather during the shoot so we had ideal lightening conditions. 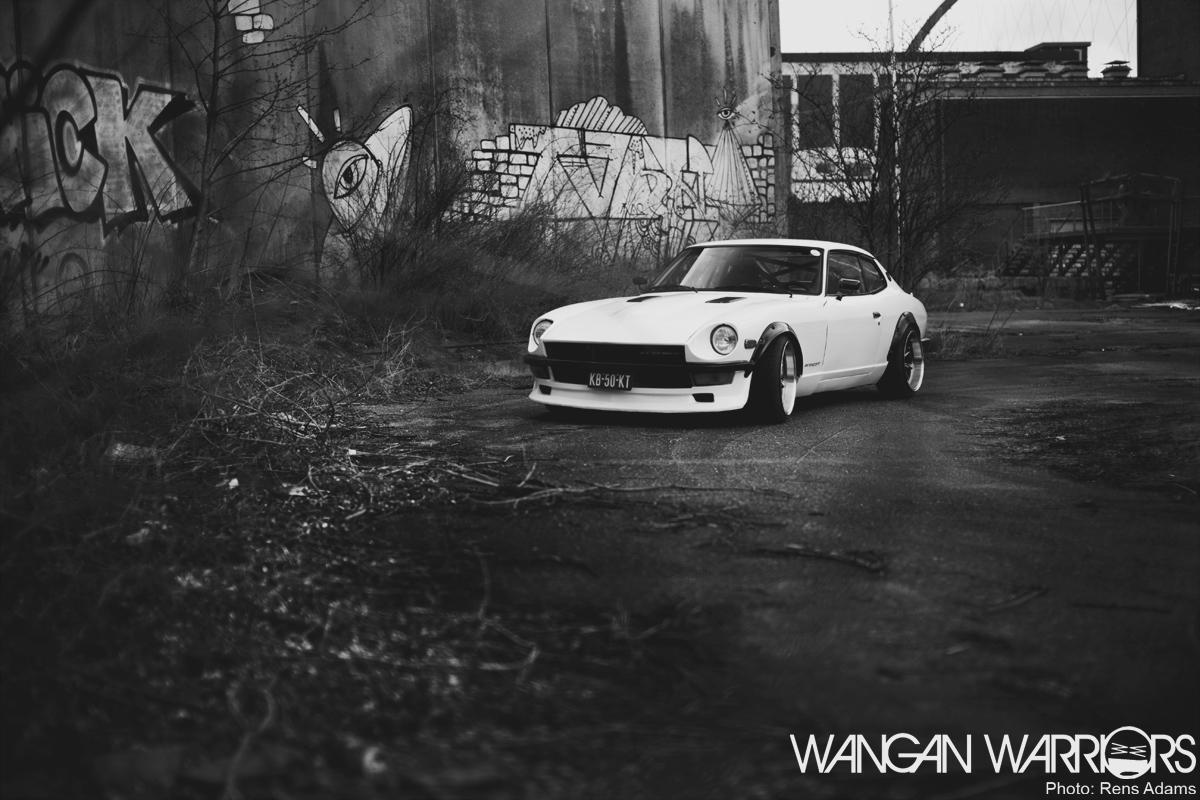 Robin is one of those guys who does as much as he can himself and I can always appreciate such commitment to a project. And the fact is that Robin really knows what he’s doing, because he just finished a complete overhaul of his gearbox which is not the easiest job in the world. 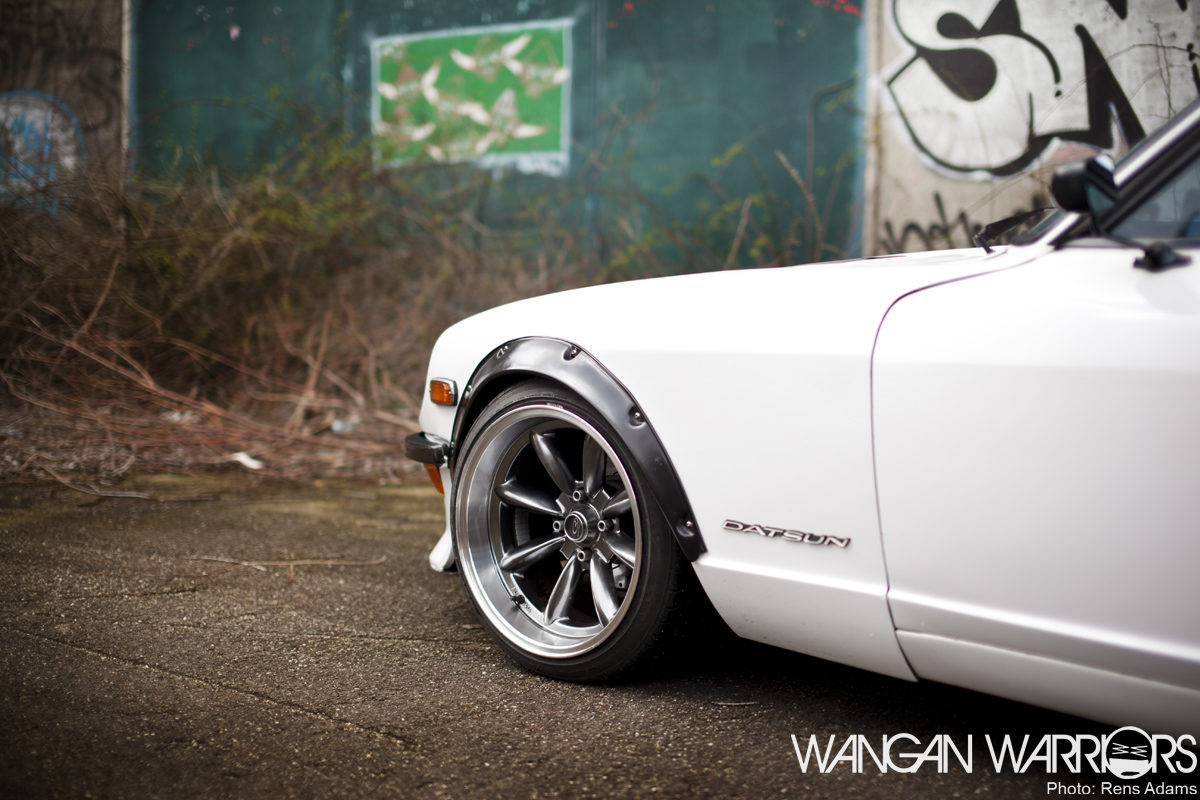 Allow me to show you some of the exterior modifications which signify the appearance of the Fairlady. Let’s start with the black Datsun 240zg fender flares which really are a must-have, especially when you’re going for wide wheels and offset. They’re nicely in contrast with the ‘Qm1 Skyline weiss’ paintjob and if you ask me it wouldn’t look as awesome as it looks right now if the flares where white as well. 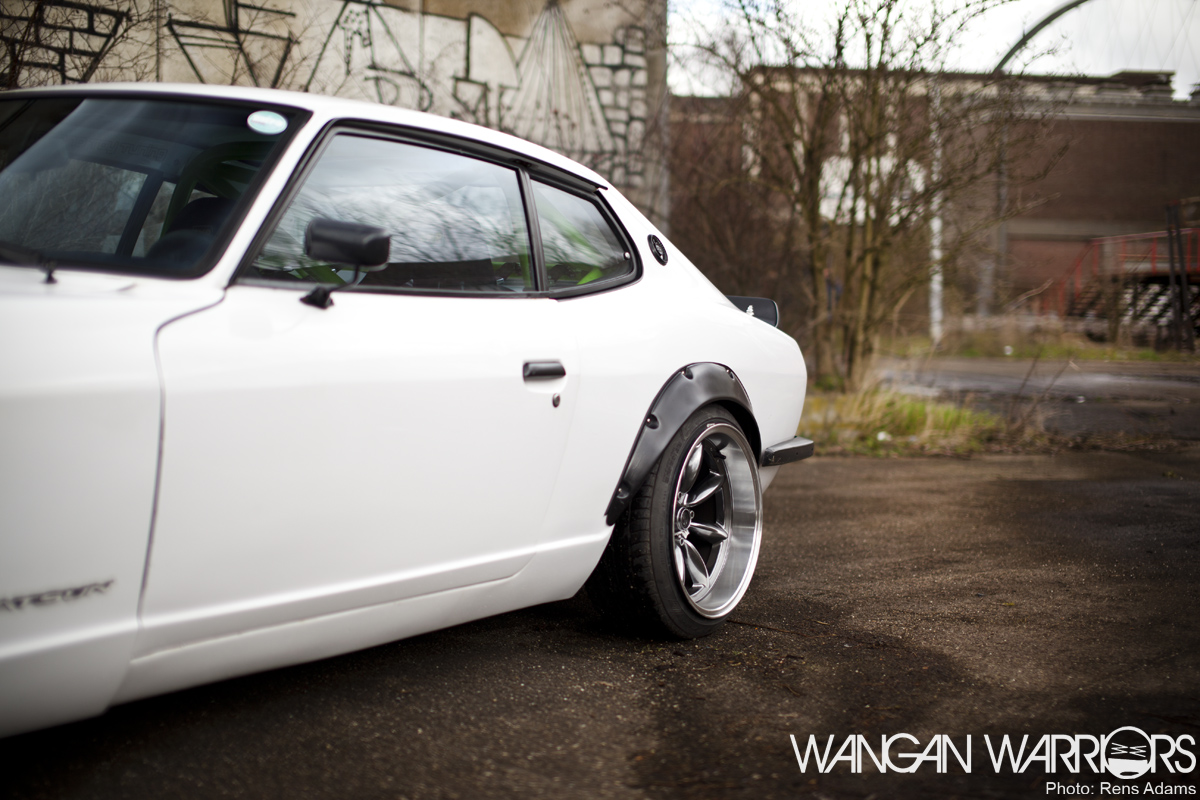 Robin went for the Rota RBX wheels with Falken 452 215/40/17 stretched around them. The rear wheels are 17×9,5 inch which are slightly wider than the 17×9 inch on the front. It does have some stance looks but it still keeps its track sportive and track oriented. 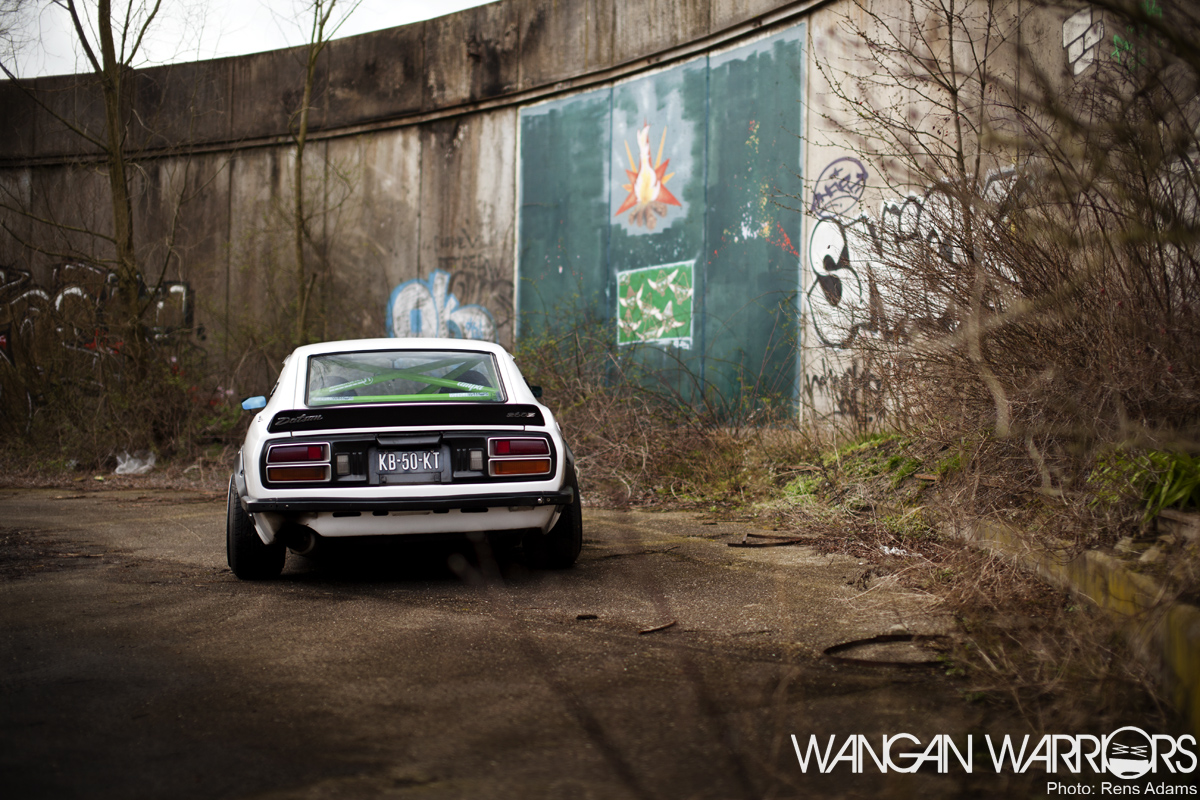 The black on white details are everywhere to be found on the car which is really a returning signature of this Datsun. Robin mounted a BRE Racing rear spoiler which is really enough for a rear wing on a 260Z. I’m not really fond of big wings on classics like these but hey, who am I? 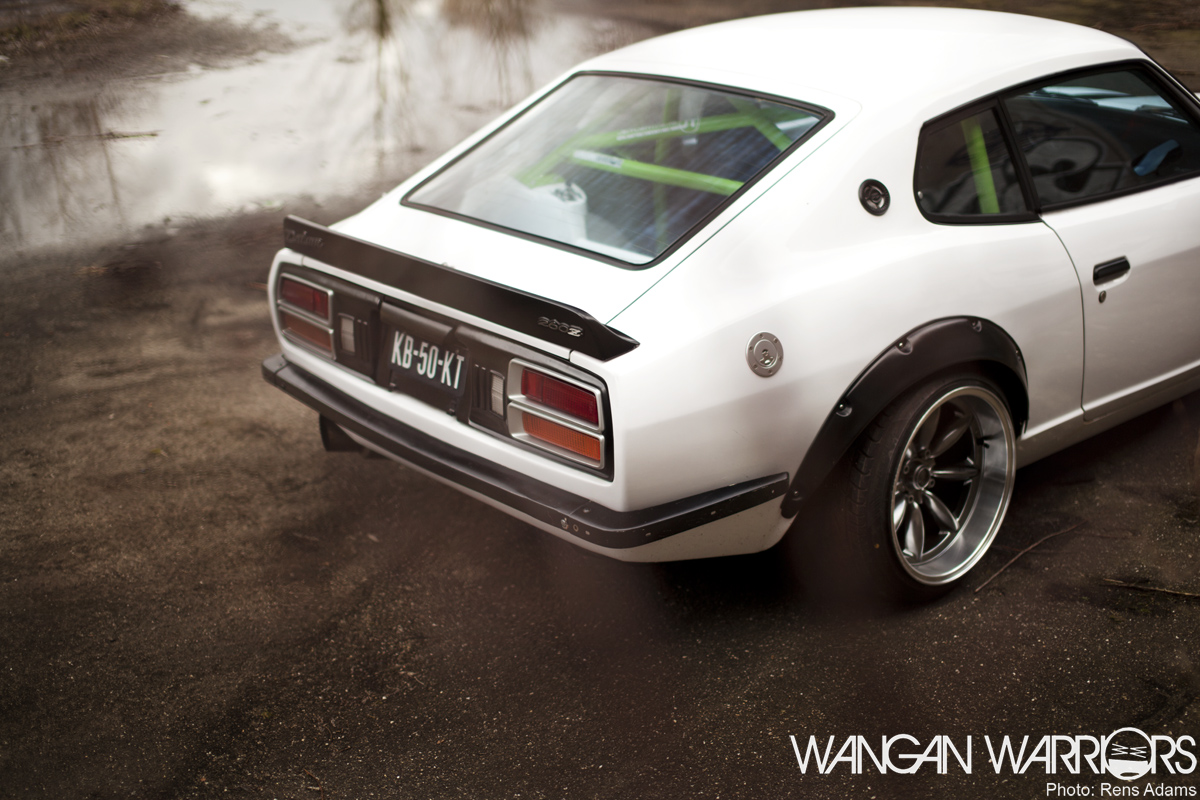 It might be that not everyone shares that opinion, but I’m happy to say I really like Robin’s style and attitude when it comes to the Datsun. I believe it’s a real mixture of traditional style of the Fairlady and modern influences. 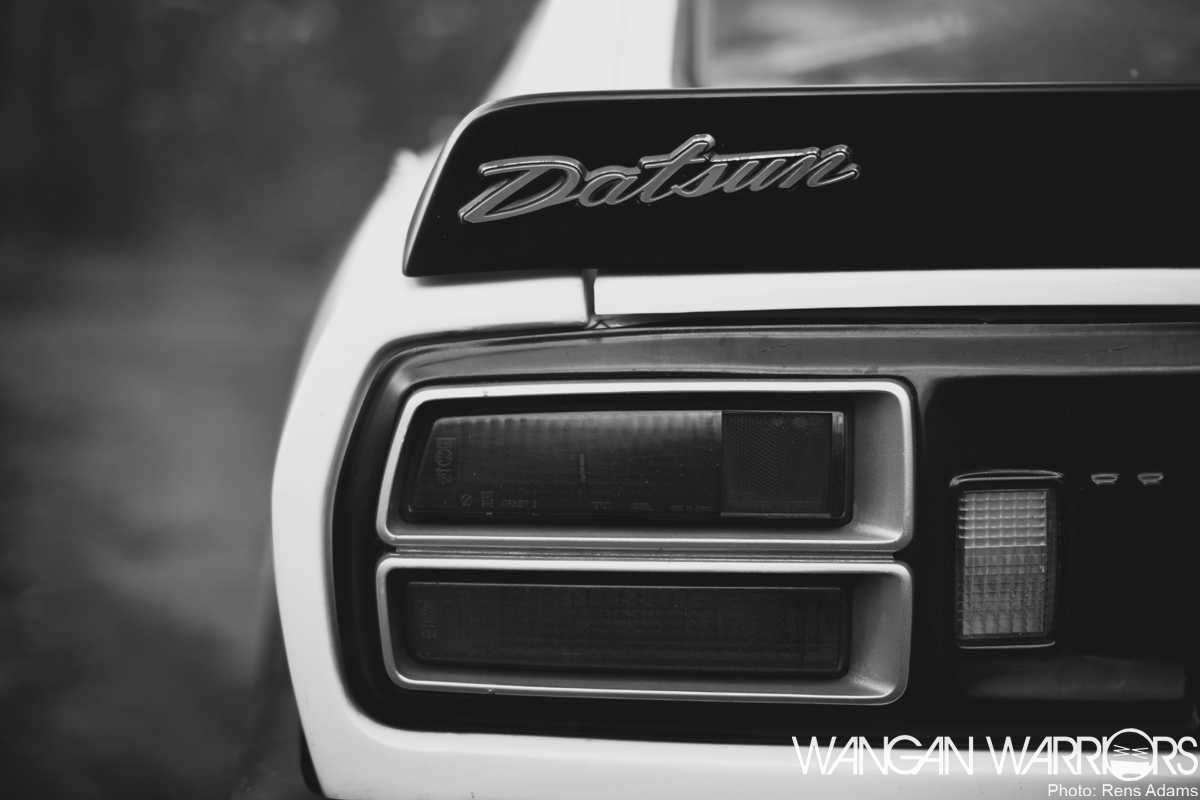 Robin kept most of the original logos in their authentic places and replaced the badly damaged ones with new OEM Datsun emblems. 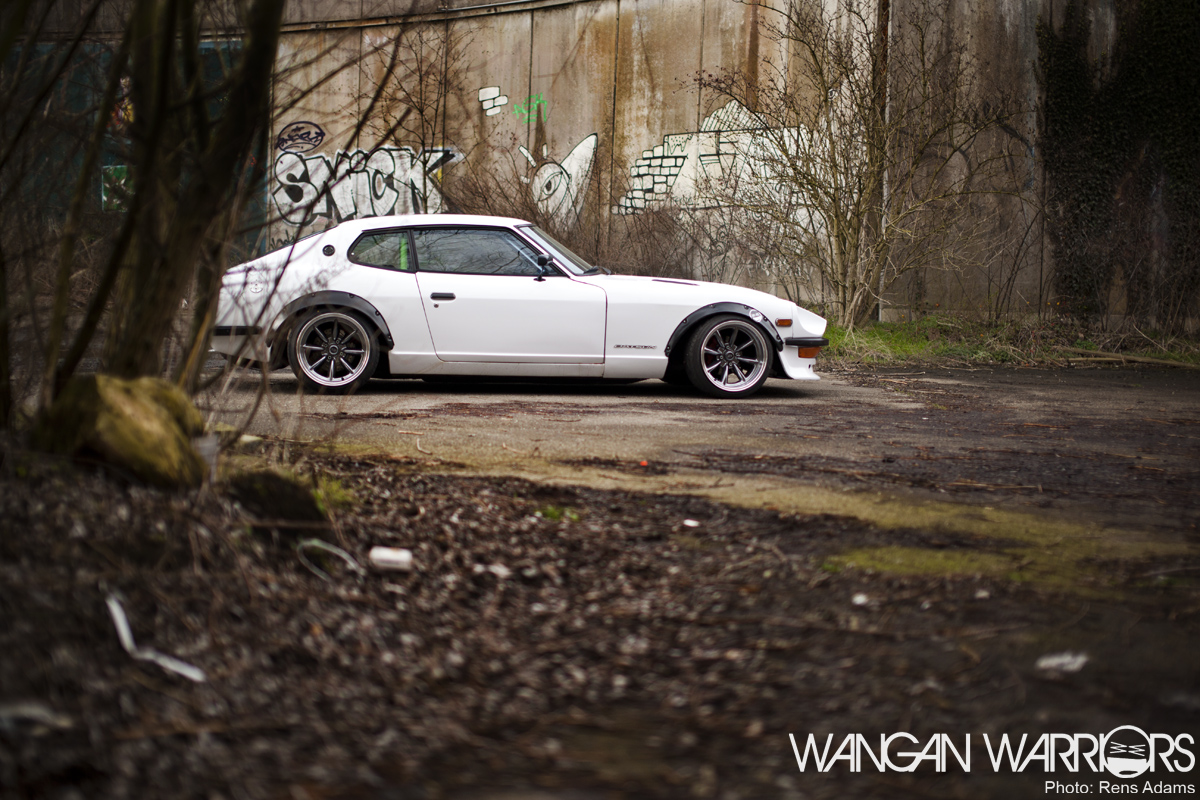 Let’s move on to some technical information about the car. Robin upgraded the brakesystem quite substantially with Toyota Landcruiser 4-pots brakes on the front with Nissan 300zx Z31 braking disks. On the rear there are solid Nissan 300zx Z31 disks mounted combined with Nissan Silvia S14a brakes. For handling Robin installed BC racing coilovers and they give the 260z a nice low look. 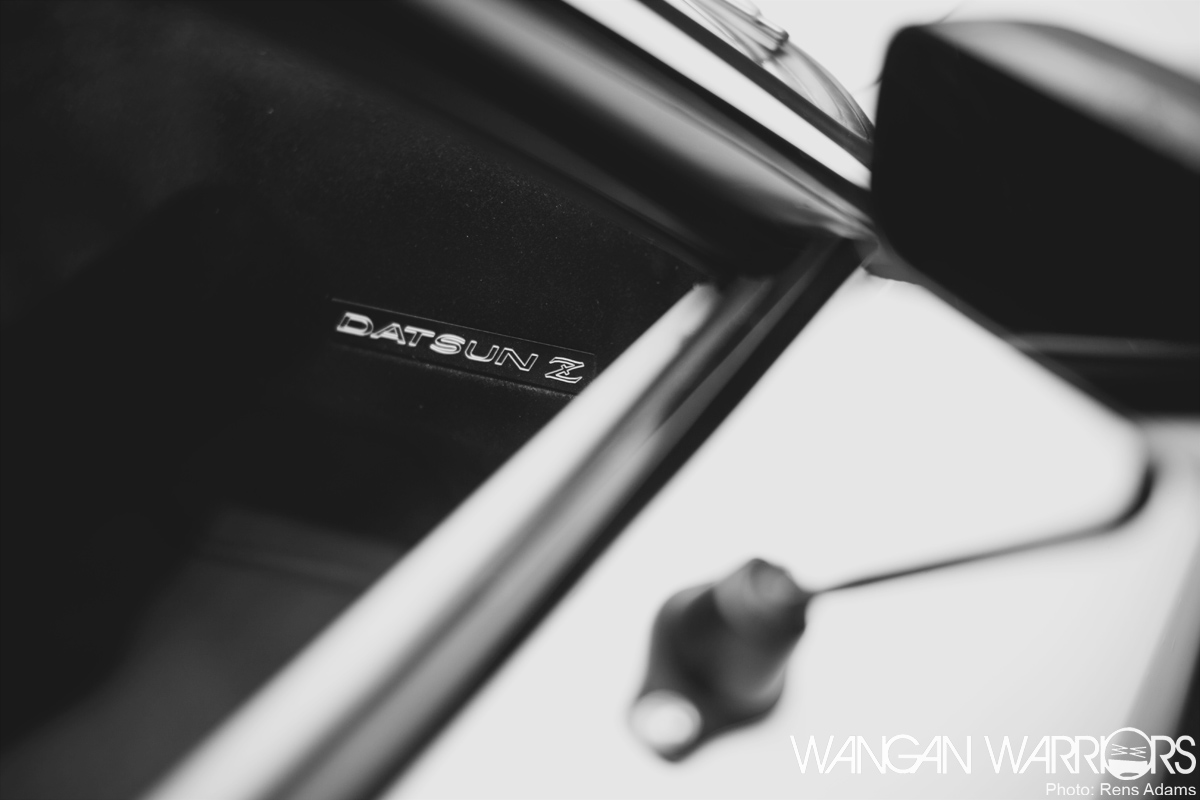 As you might have guessed the interior isn’t untouched either. Robin changed every single surface of the interior starting with stripping it down completely and using the same paintwork as the rest of the shell, the ‘Qm1 Skyline weiss’. 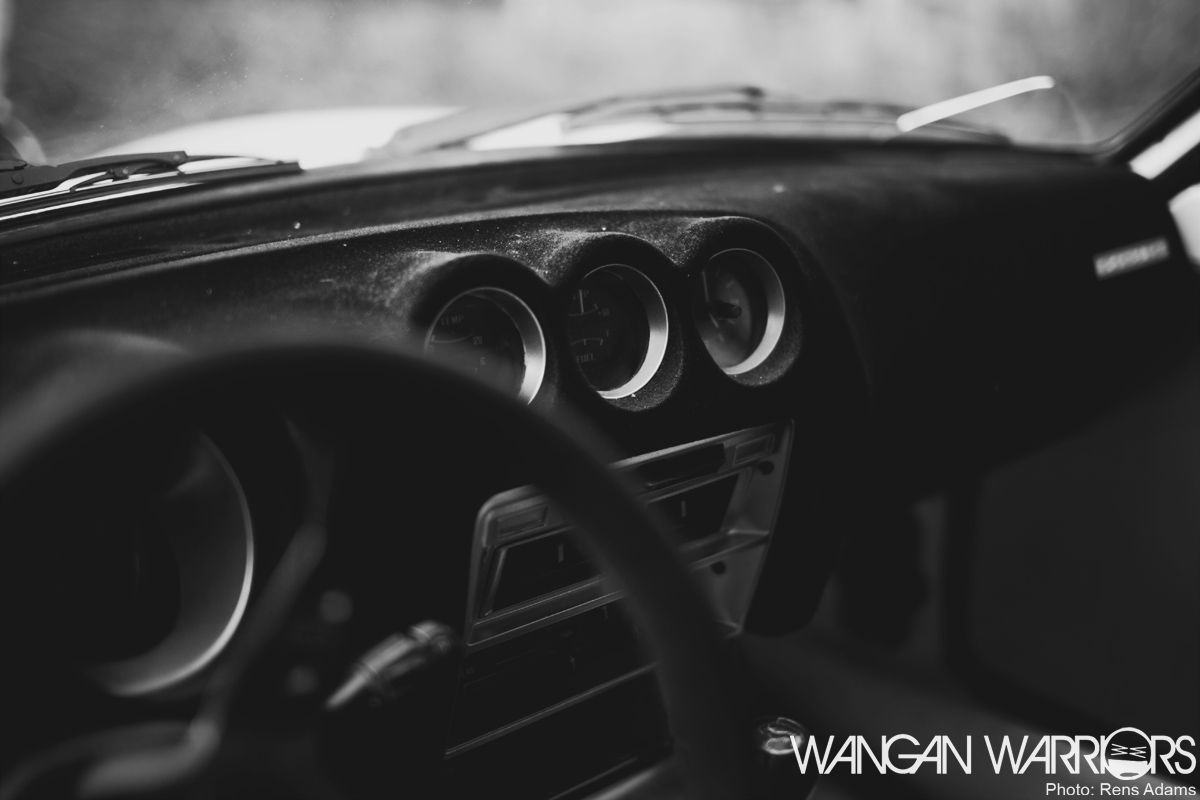 The OEM dashboard was flocked which is about the the only original part of the interior but still suited up to have a modern appearance. Robin used a Type R rev counter and replaced the original steeringwheel with a QSP deepdish. 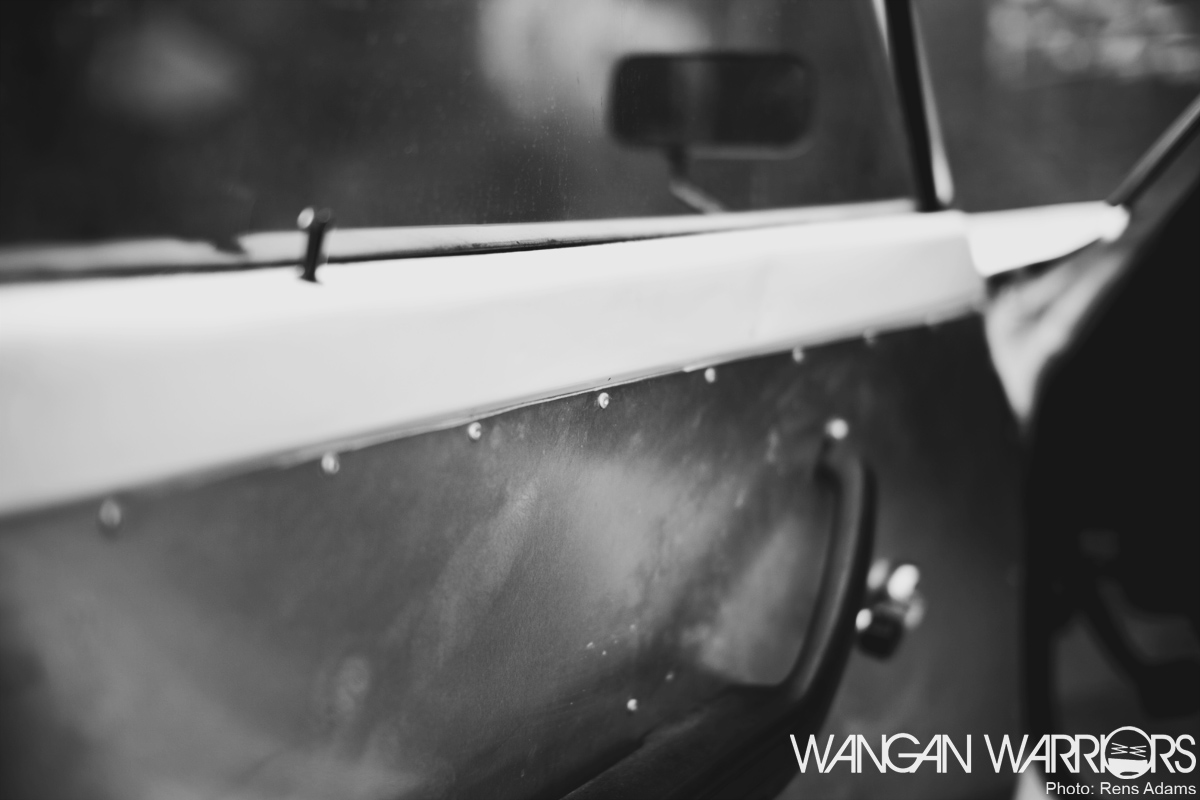 The doorpanels are one of those hardcore details which really stand out if you ask me. I love the look of the unpainted and plain alluminium door- and side panels. I always look forward to the little bits of details to discover while shooting a car and this was one of those. 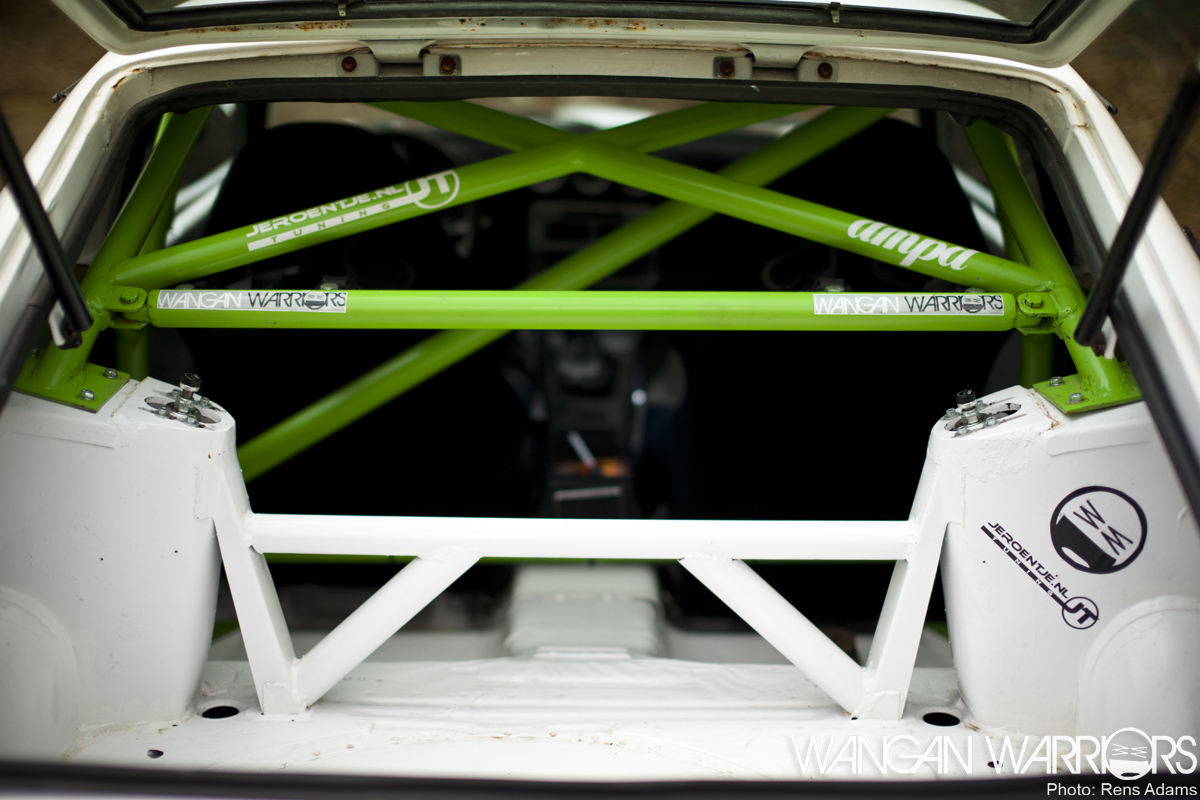 Robin bolted in a custom made rollcage and painted it in this funky green colour. It’s also awesome to see Robin is rockin’ several Wangan Warriors vinyls both on the interior and exterior. I tried to leave them out of my shots most of the time but I do want to point out that we appeciate this form of support! 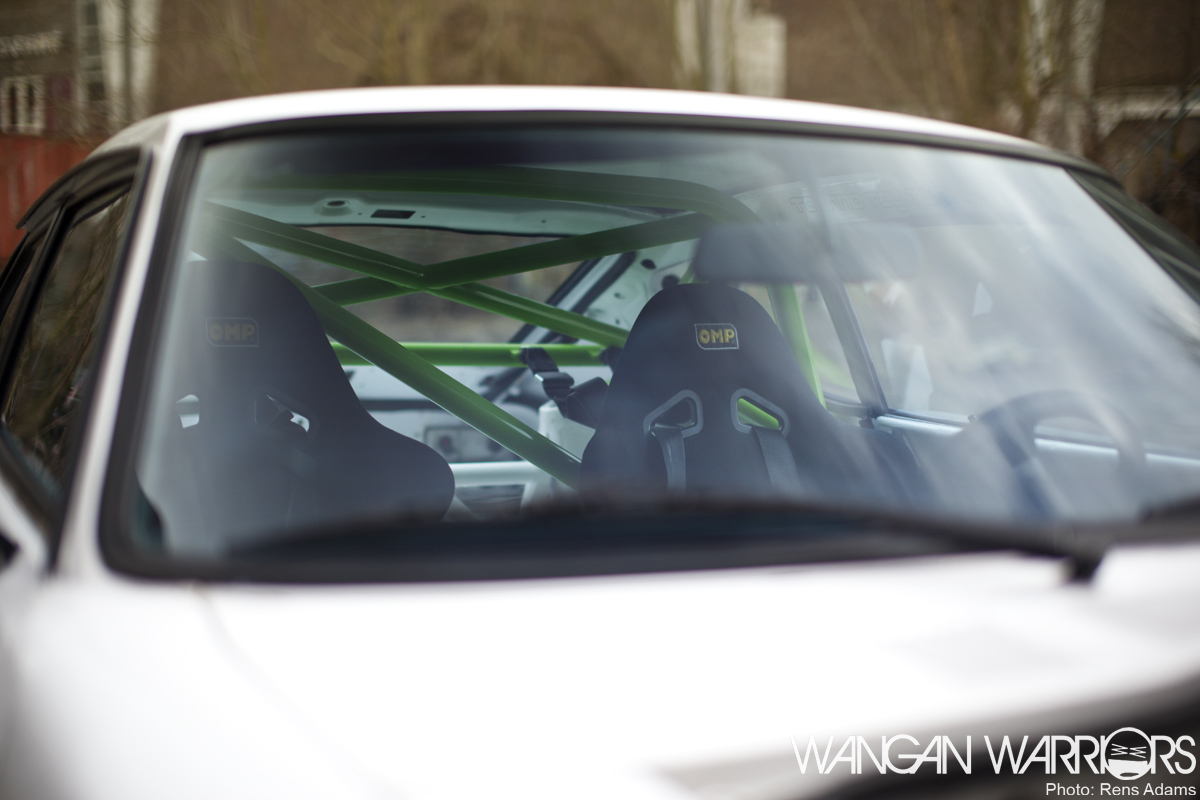 To keep things sportive yet comfortable in the interior Robin picked the adjustable OMP bucketseats and went for a set of unknown aftermarket 4-point harnesses. I like that too in a way, no fancy or expencive brands to be seen actually. As long as it works! 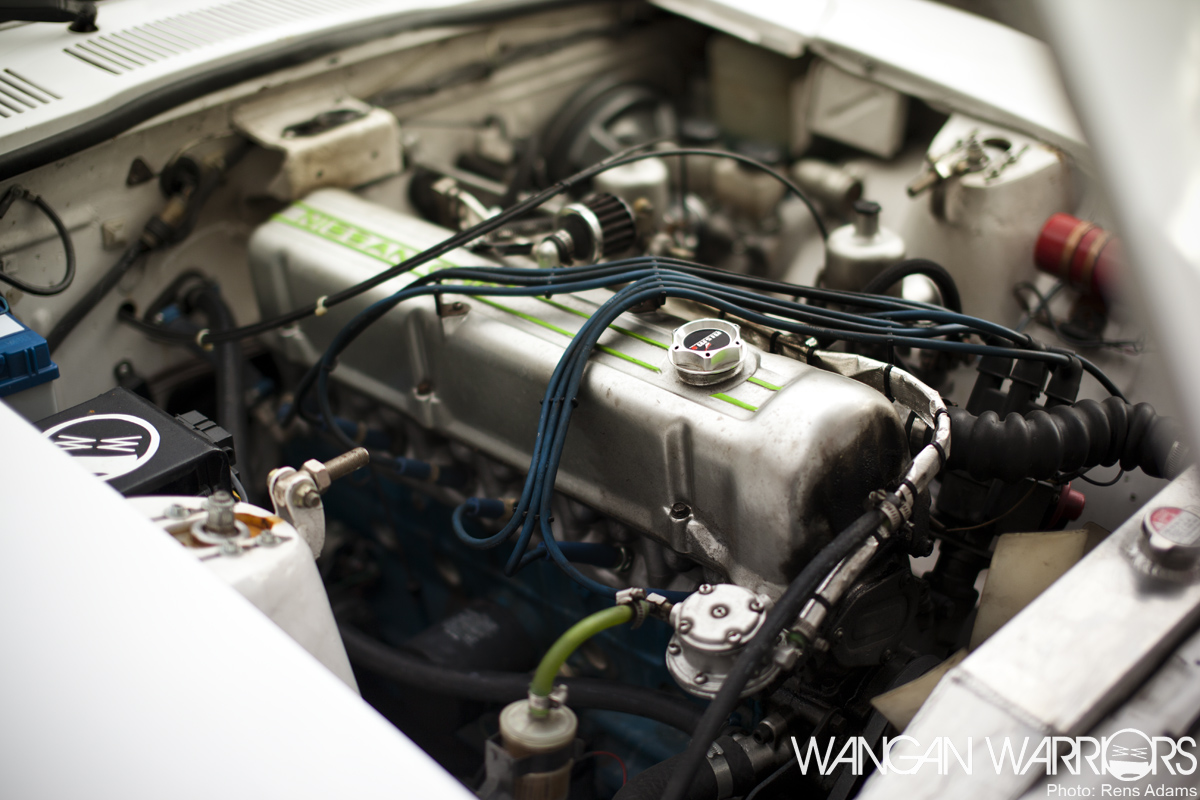 Continuing with the engine bay, which looks very sorted and maintained, with inside the original 2.6 liter OHC 6 cylinder engine. Early on in the project Robin came across a few problems with the 2.6 but solved about all the issues and it’s currently running very well. 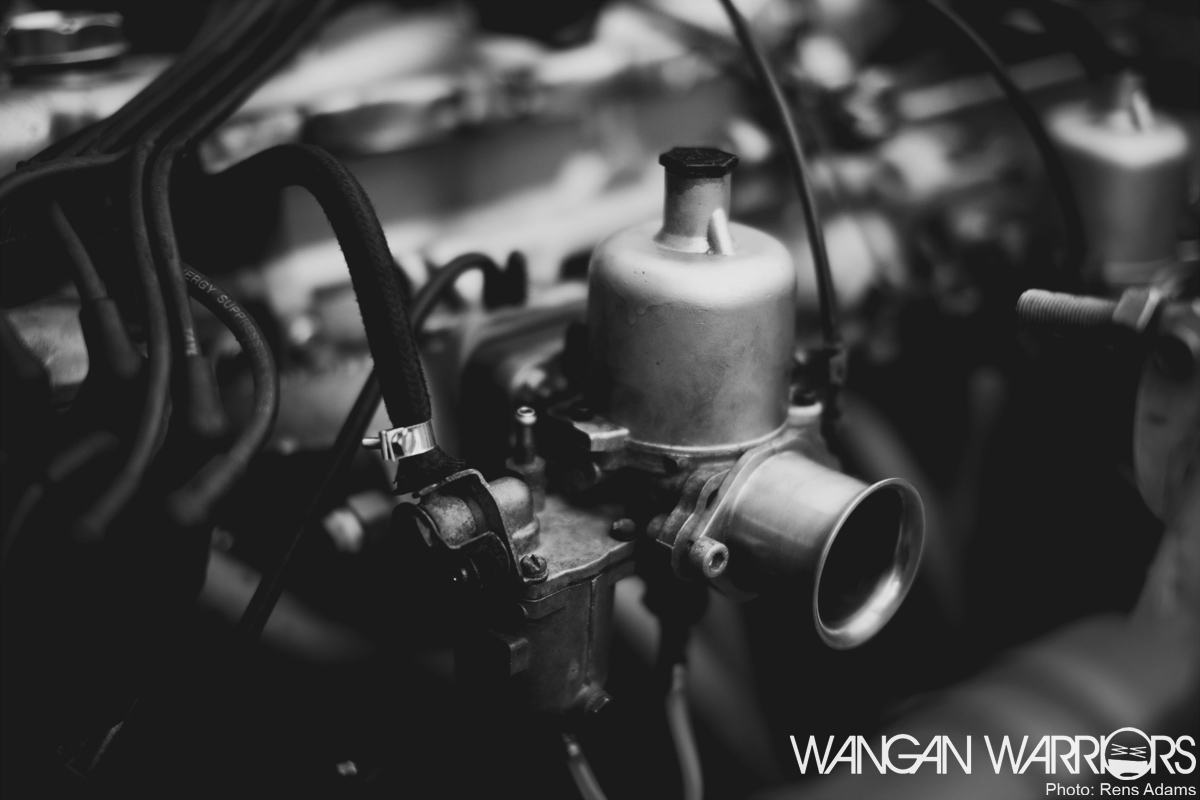 Robin installed the Hitachi SU double carburators of a 240z and mounted polished intake cups on them, but Robin tells me that this will soon change because he’s already in the possession of 3 double Dellortos dhla 40 carburators and an SK racing intake manifold. Indeed Robin is a busy guy and some day he will rebuild a RB26DETT for the Datsun. Right Robin? 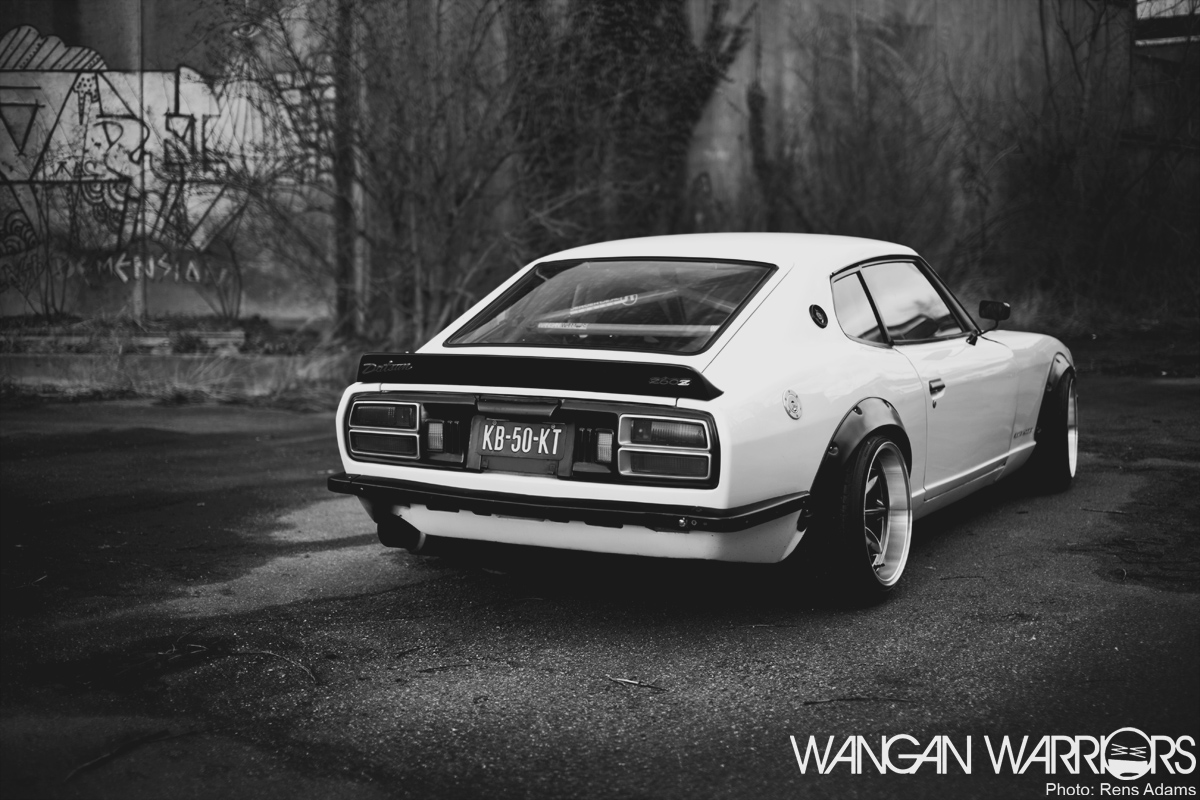 I was planning to add a full speclist at the bottom of this post so you would know every single detail about the Fairlady and the modifications I left out of this article. But I rather have you to come to #WNGN and see this car for yourself, have a chat with Robin about the project and just have a good time with us! It’s all about community and sharing thoughts and interests right? 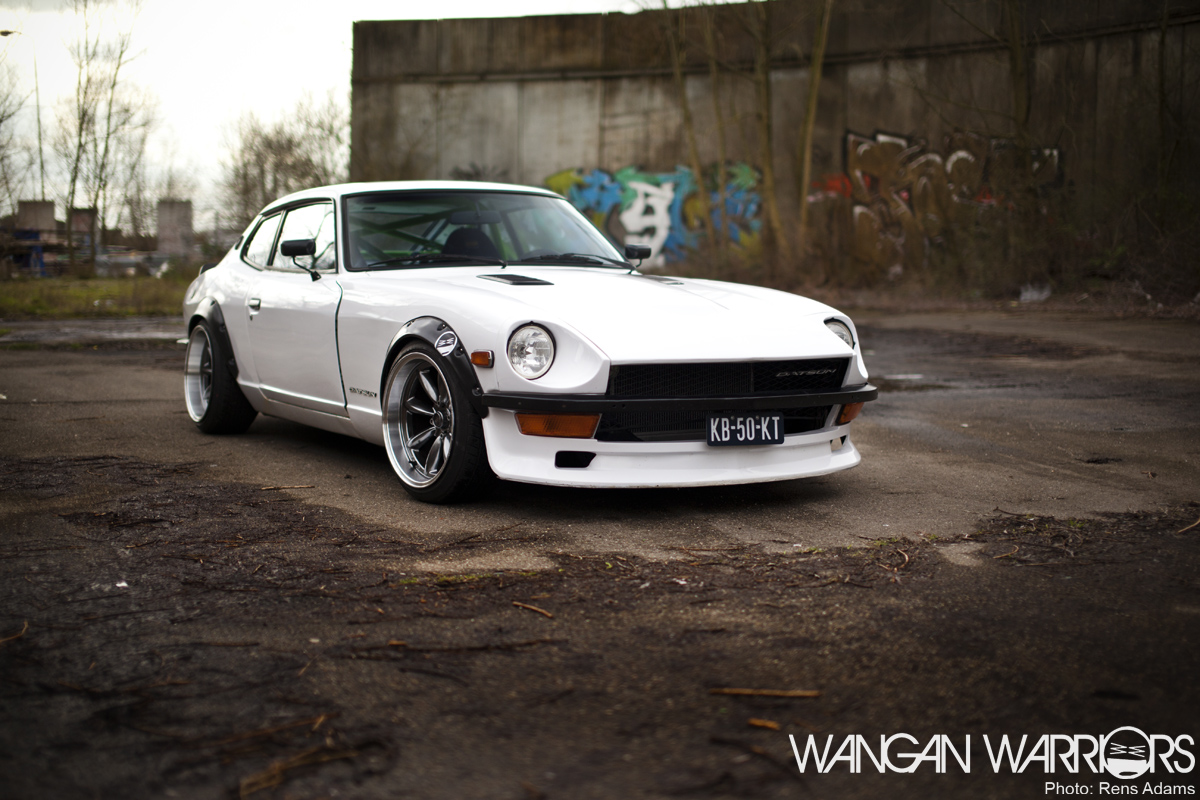 I would like to thank Robin Sluijter for his support for Wangan Warriors so far and hope you keep updating us through our forum. Us bloggers and photographers will keep you readers informed with all the progress this car makes because I believe it’s far from finished. Do you have an awesome project in your garage or an amazing showcar ready to have some exposure? Feel free to inform us via the contact from at the bottom of the website!