A while ago I drove to a remote part of The Netherlands. A part where they speak a funny language called Frisian, where space is abundant and where two brothers are building awesome cars. I went there to shoot one of those cars, an awesome Suzuki Swift with a Honda heart transplant and an attention to detail that was mind boggling. 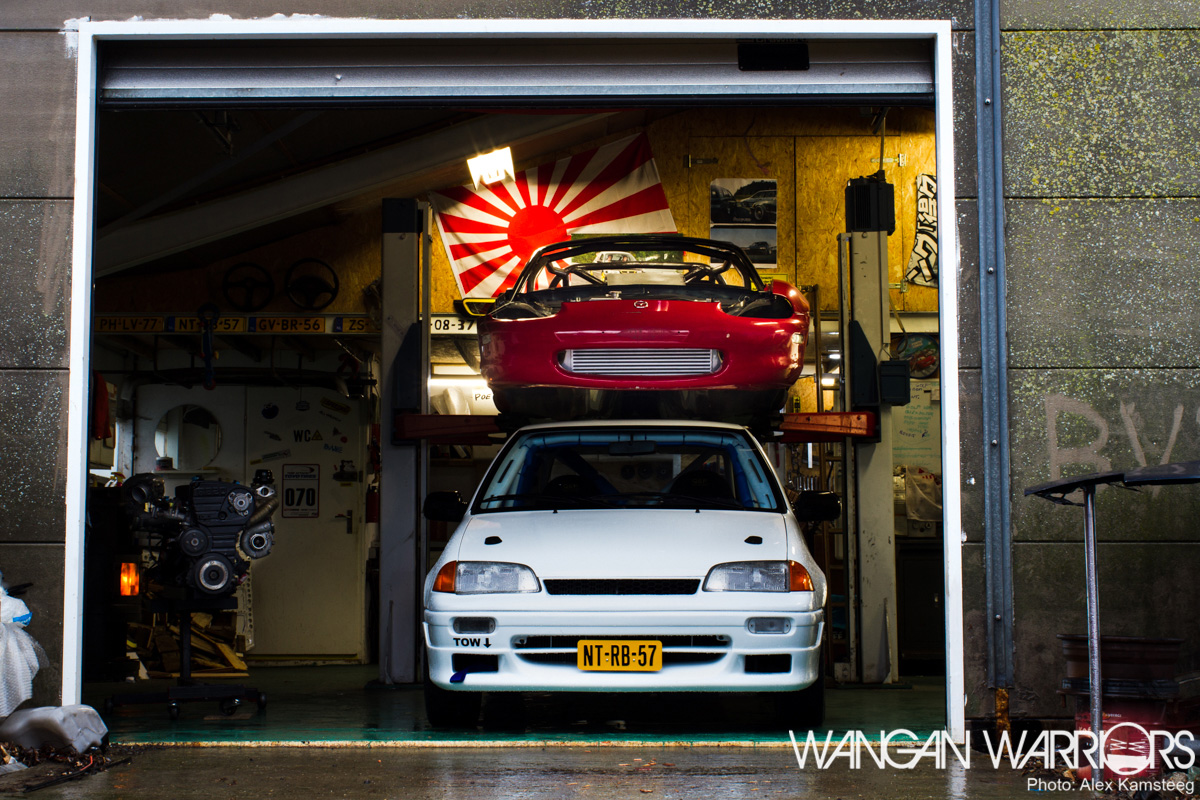 That Swift was built as a track tool and fun car for the younger one, Niels. It was just finished and that gave Dennis, the older brother, all the space he needed in their shed to really get started working on his project. And that isn’t something you see everyday too. 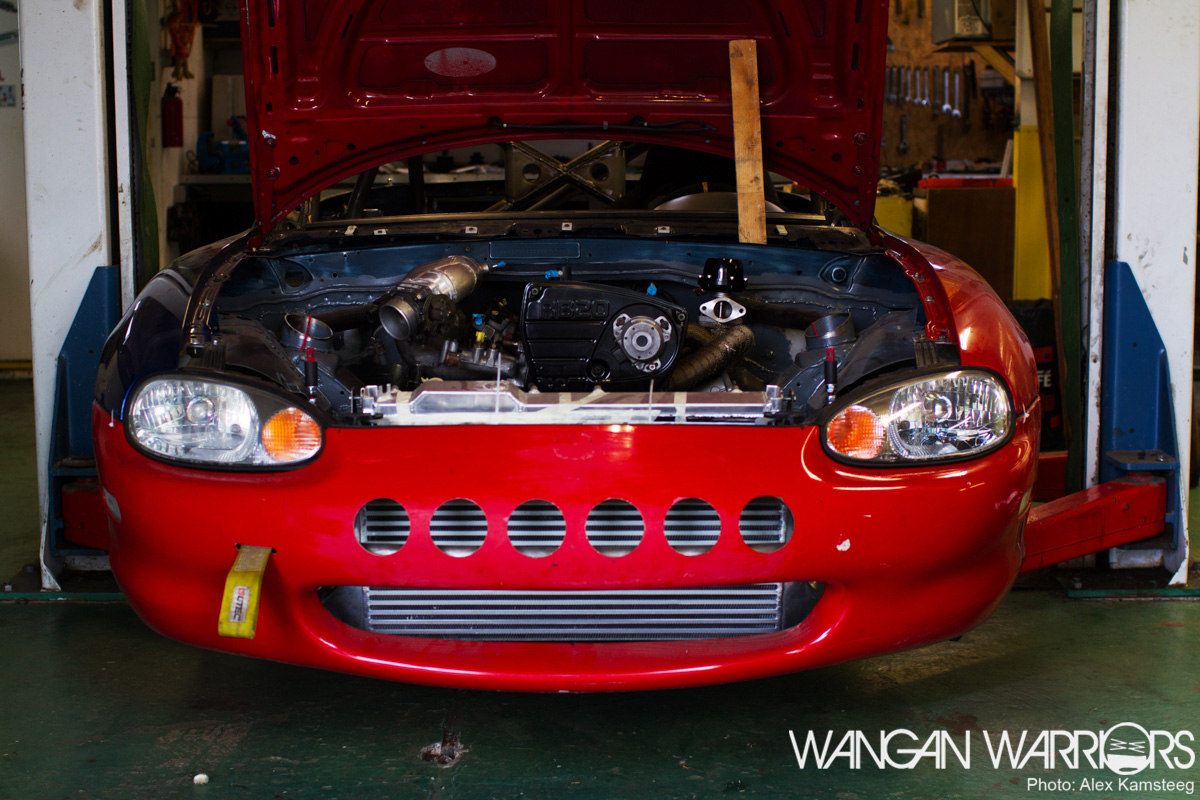 The front of the car should give away some clues, especially to Mazda connoisseurs. What’s that huge intercooler doing there? And the front arches are looking a bit wide for a Miata? And is that an external dumpvalve? Is it even a Mazda engine? 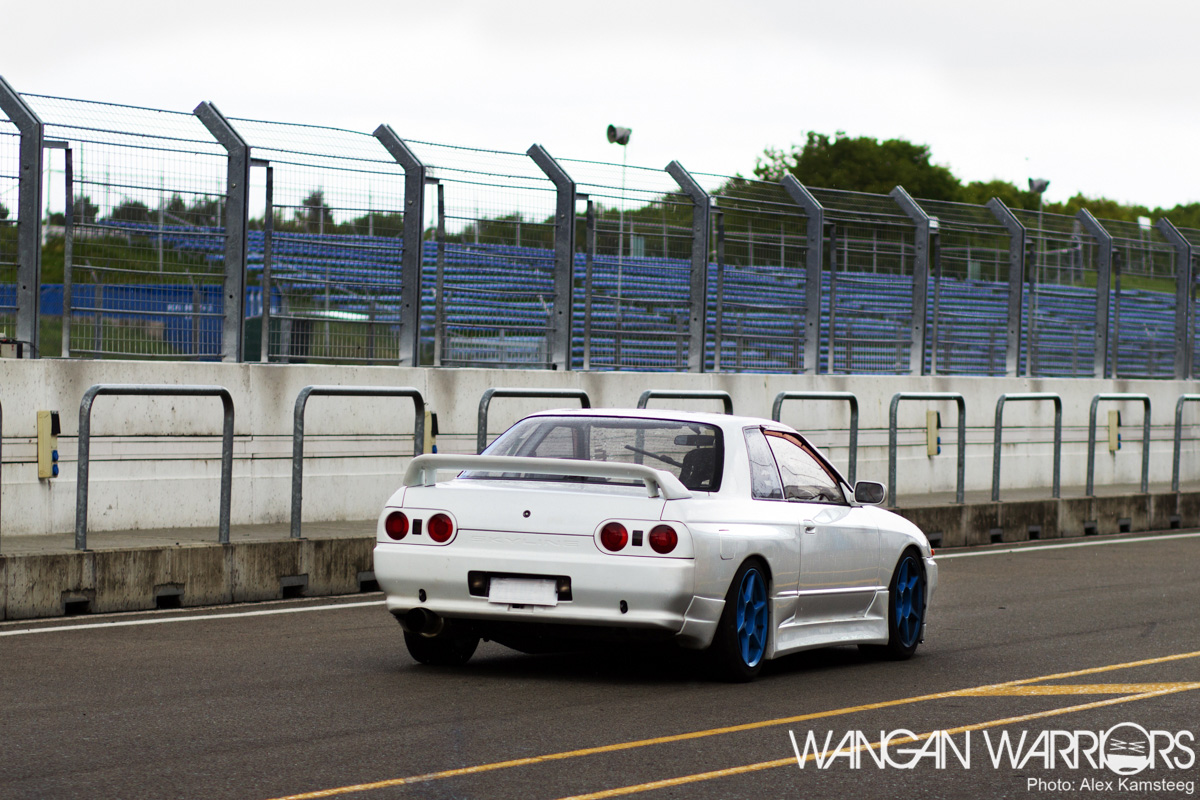 We can answer some of those questions by going back in time a few years, to 2012 to be precise. Back then Dennis owned a Nissan Skyline R32 that he used regularly on the track. And to hone his fabricating skills, of course. He stripped the interior, welded in a roll cage and beefed up the suspension. 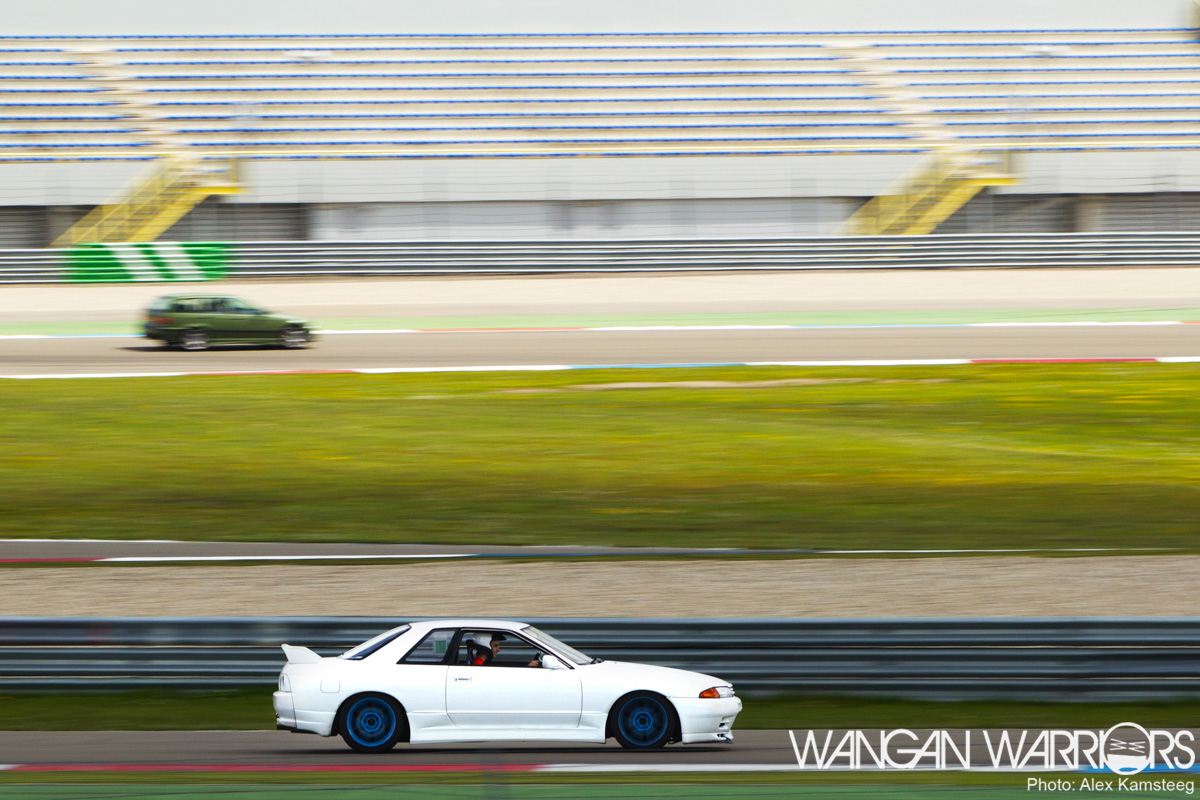 Unfortunately, the car found its untimely demise on the Nürburgring. Although the cage kept Dennis safe the car was beyond repair and after paying the hefty bill for the damage to the Ring he transported the car back him to salvage whatever parts he could. 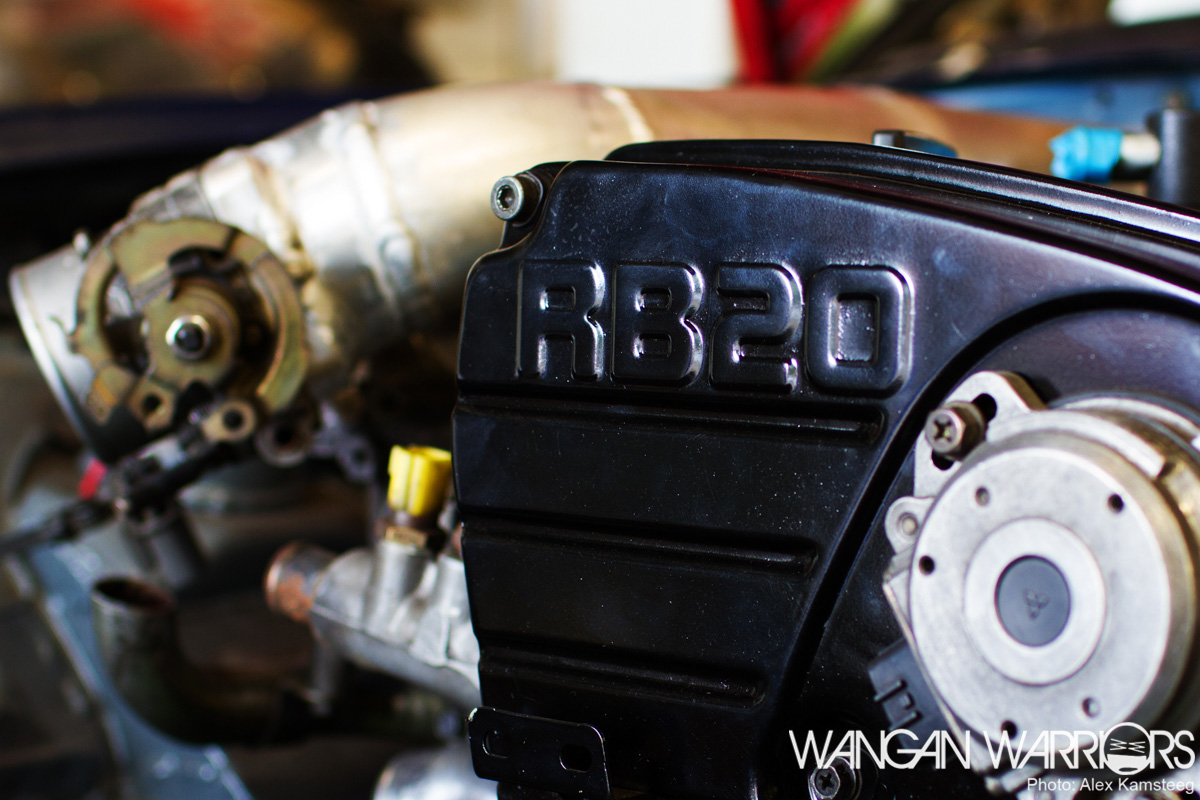 That turned out to be quite a huge pile of parts. The engine and whole drivetrain were undamaged so Dennis stored them in corner while he bought a new car, a Mazda Miata NA. He liked the lightweight nimble chassis and the looks of the car, but more importantly the opportunities it offered to him. After all, you can’t let that engine just rot away in a corner right? 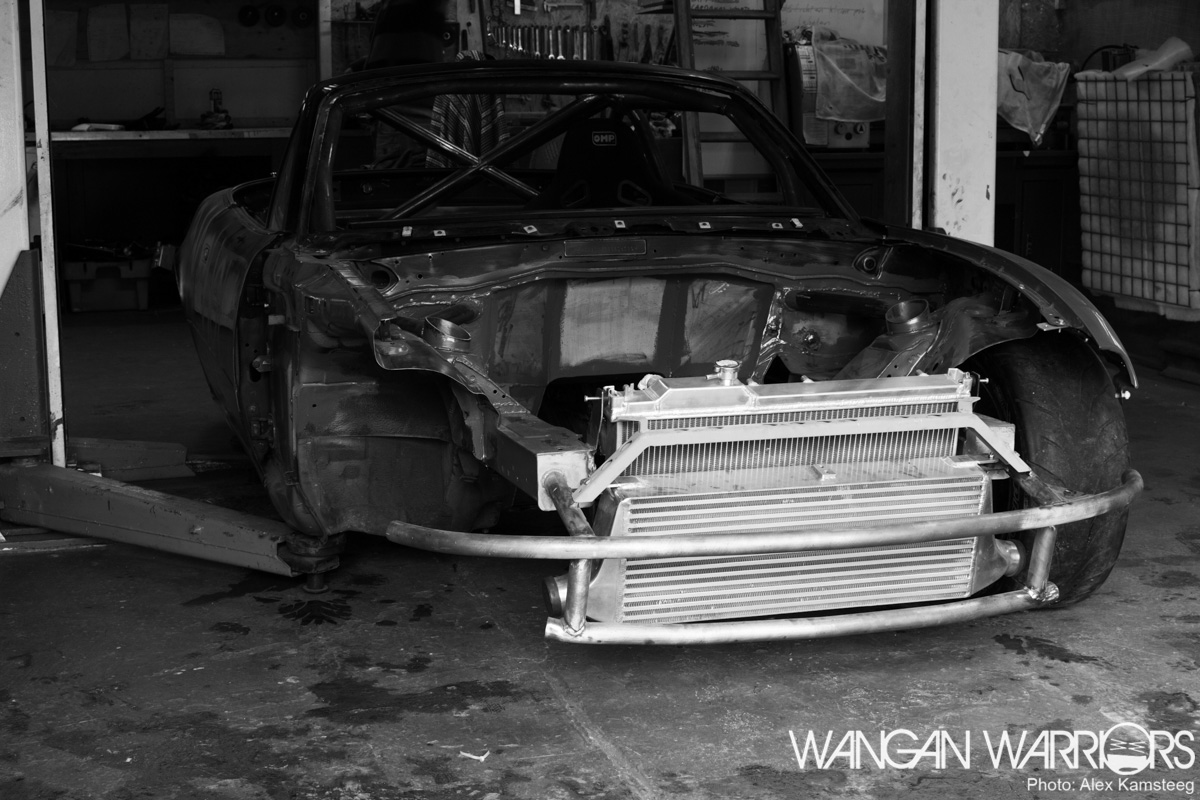 So, after a lot of stripping he started measuring and discovered that the RB20 wouldn’t fit in the engine bay. That wouldn’t be a problem though, since Dennis already had decided that the car had way too much metal anyway. So he took his cutting tools and got rid of the firewall and transmission tunnel to make some room for the engine and gearbox. 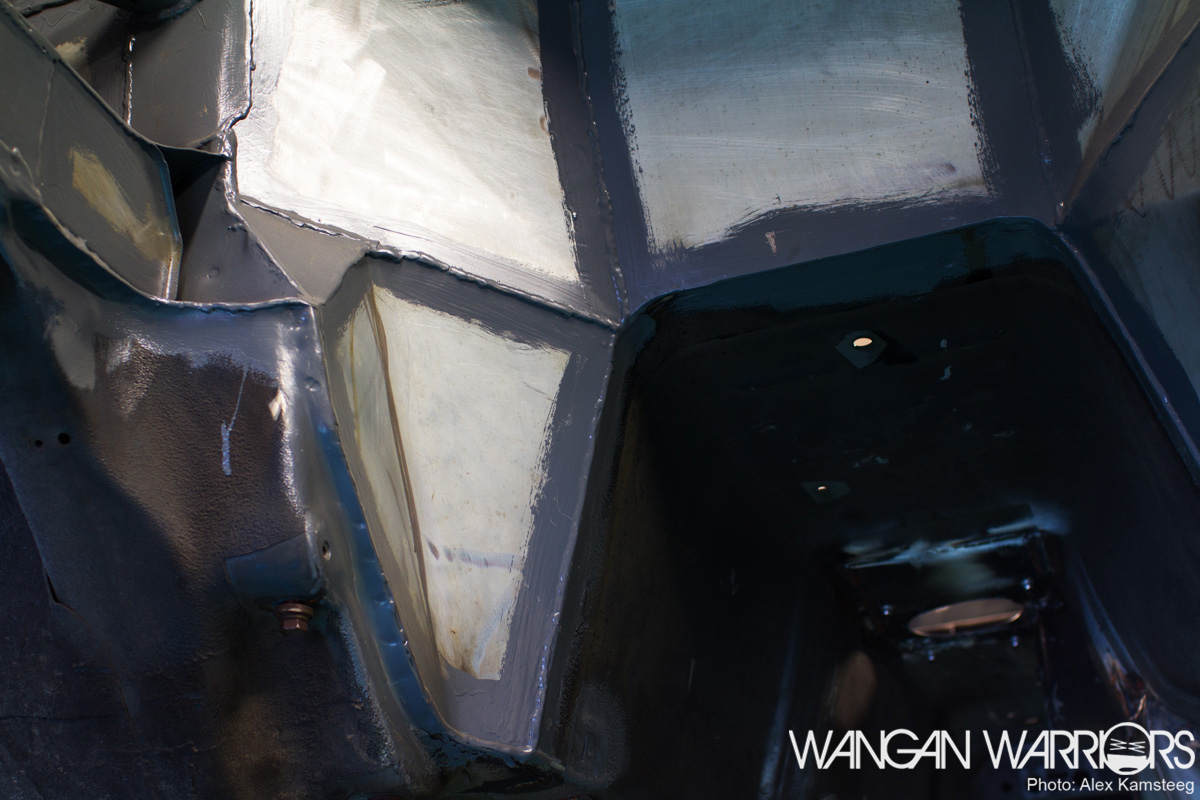 After he cut away a good deal of the car he ordered some sheet metal, fired up his welding equipment and started building a new firewall. That wasn’t as easy as it seems. He had to carefully measure everything before and during the build to make sure it offered enough room for the engine without taking away to much space in the passenger compartment. 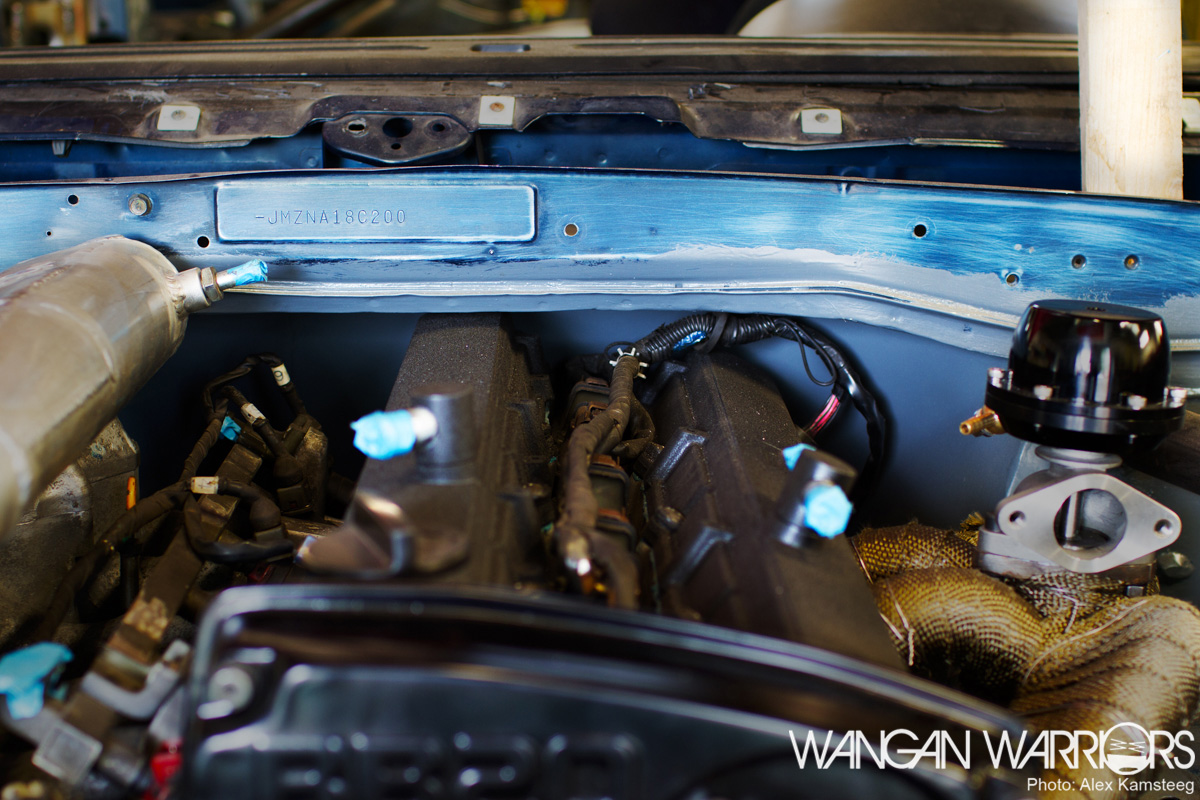 But his careful measurements paid off, because the engine fits like a glove. It sits as far back in the car as it could without taking away too much space from the foot wells. In fact, most of the engine and the heavy parts like the turbo are located behind the front shock towers. This will offset some of the negative effects on the handling that replacing the Mazda powerplant with the heavier Nissan one will have. 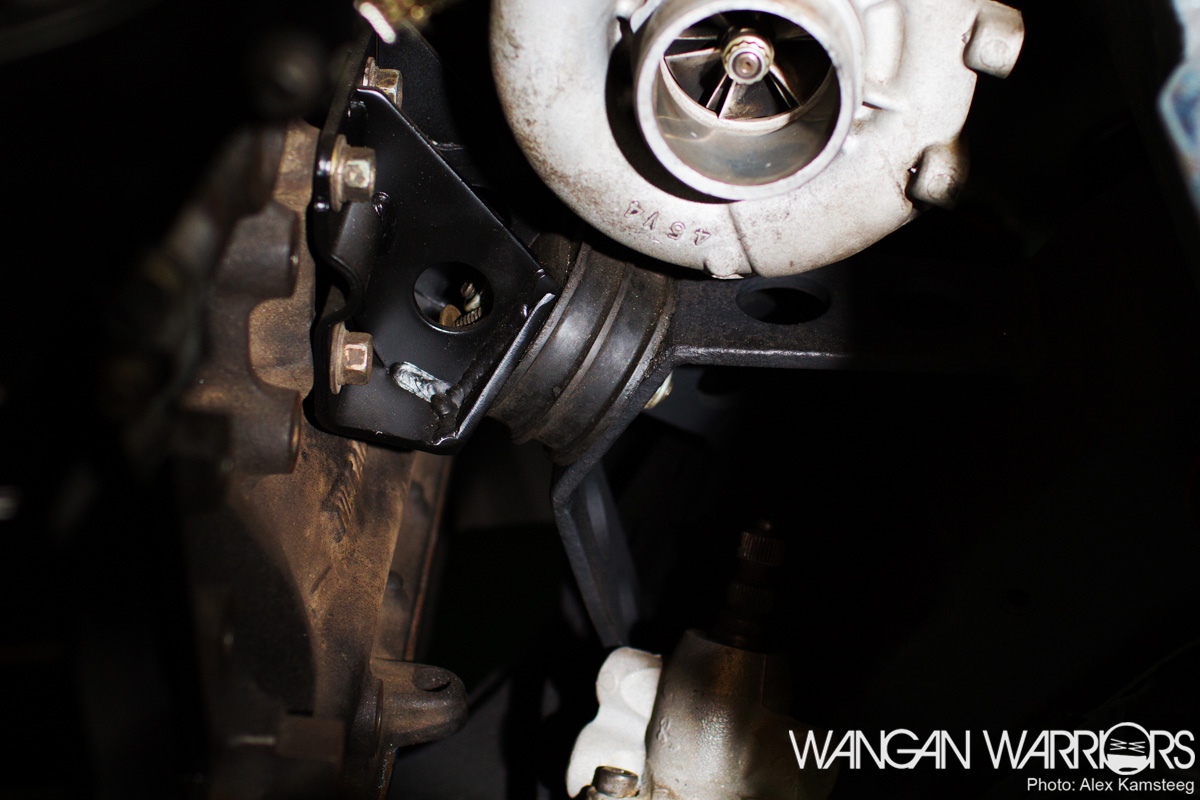 To support the engine Dennis fabricated custom engine and gearbox mounts. These mounts are keeping the engine and transmission firmly in place without, thanks to the rubber pieces, causing excessive vibrations. Creating these mounts wasn’t as simple as it looks and it took a lot of measuring to keep the mounts clear from all the engine parts taking up valuable space. 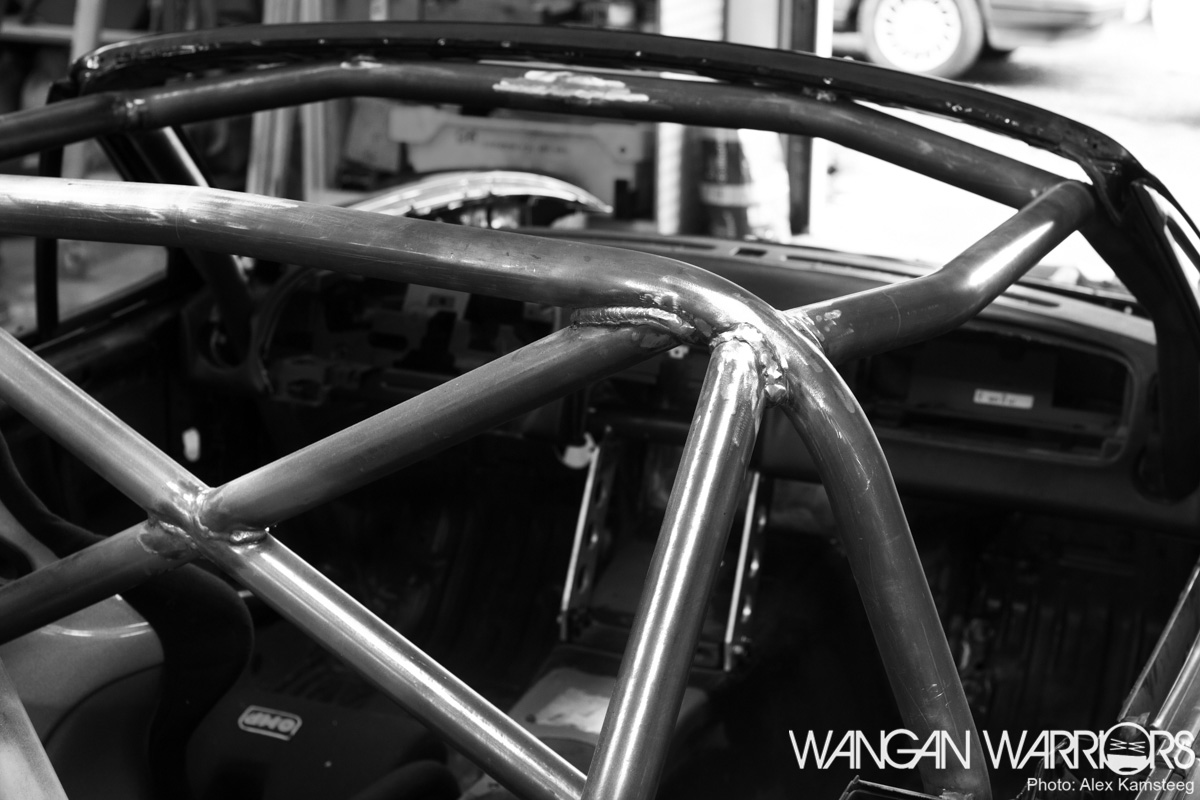 Of course the process of building stuff didn’t end here, because a proper track tool needs a proper roll cage. Especially after his accident on the Ring Dennis takes safety seriously so he welded in a beefy roll cage. It’s made from FIA spec tubes and designed by Custom Cages in the United Kingdom. 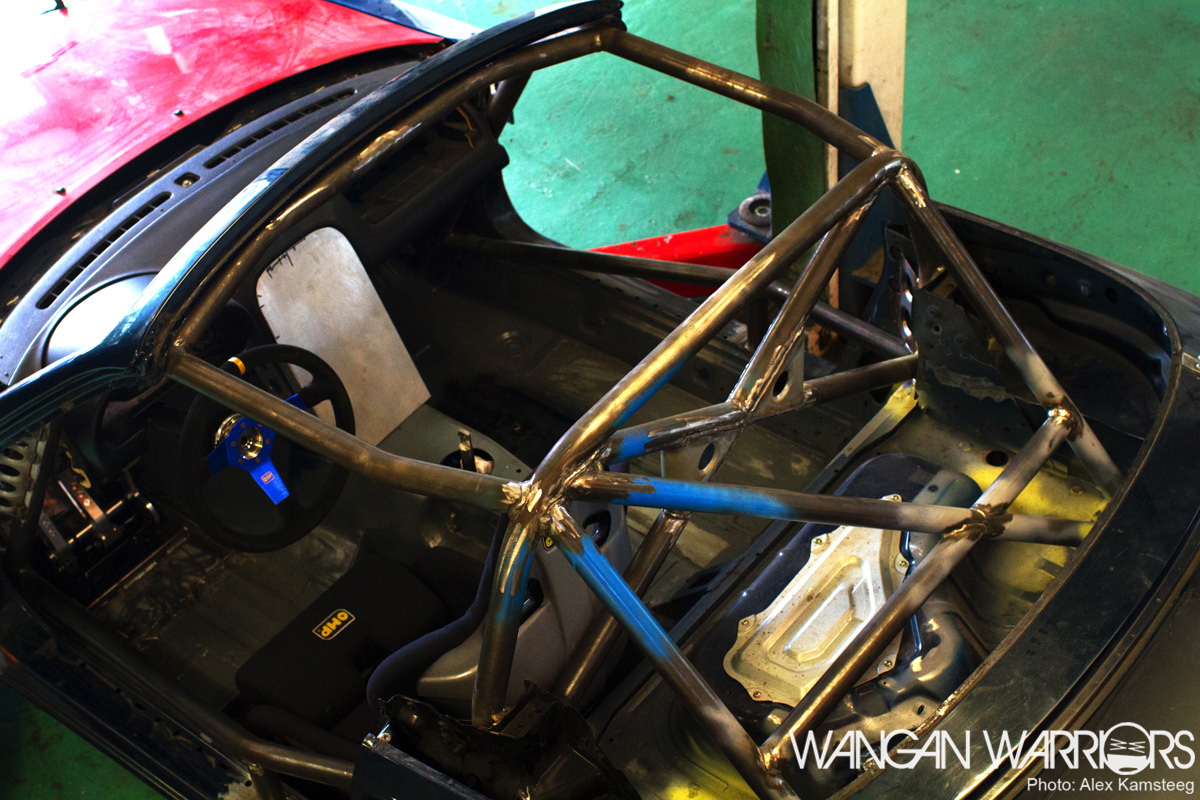 It has a main hoop just behind the seats, fixed door bars, an extra bar through the dash from left to right and it extends all the way from the rear shock towers to those in the front. For added safety Dennis left a bit of the original crumple zones in the front intact before welding on the tubed front end. 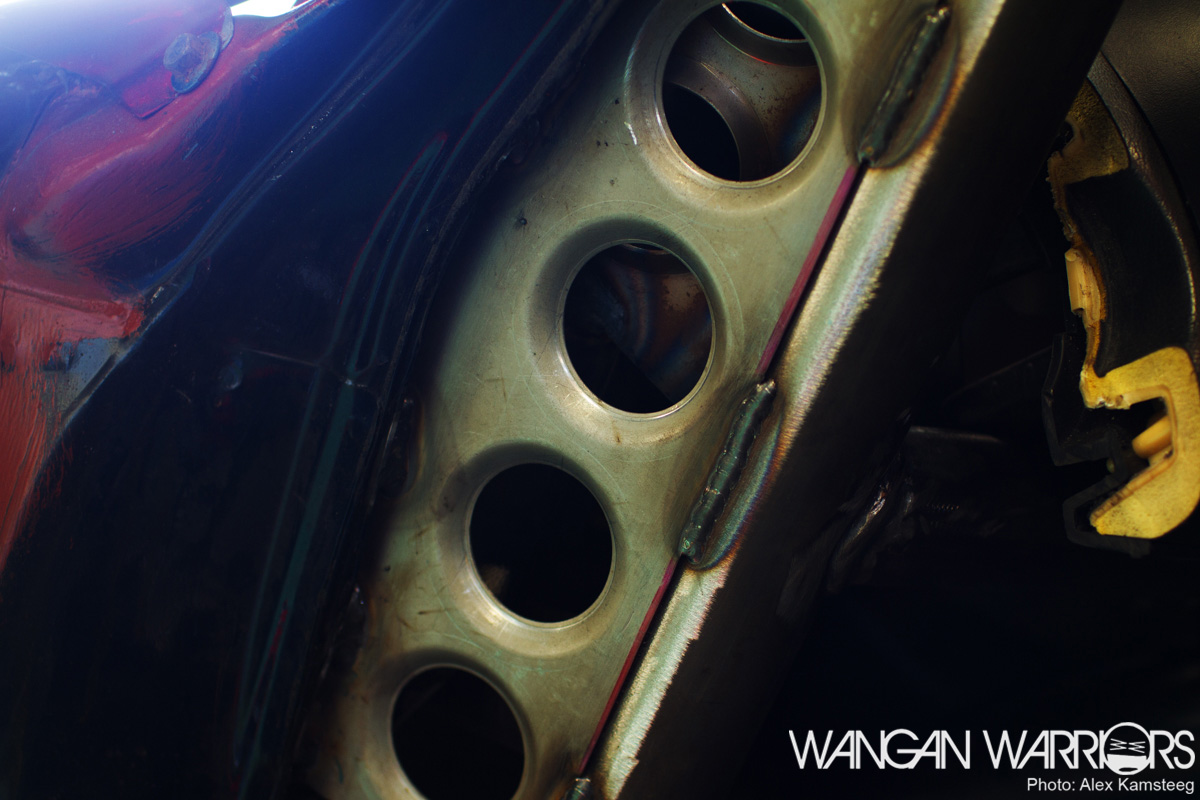 To further stiffen the car the cage is attached to both the A and B pillars by gussets. Home-made of course. Dennis ordered some sheet metal and after taking some more careful measurements he cut the necessary pieces of metal. Before welding them in place he used his set of dimple dies to remove some weight and strengthen them. 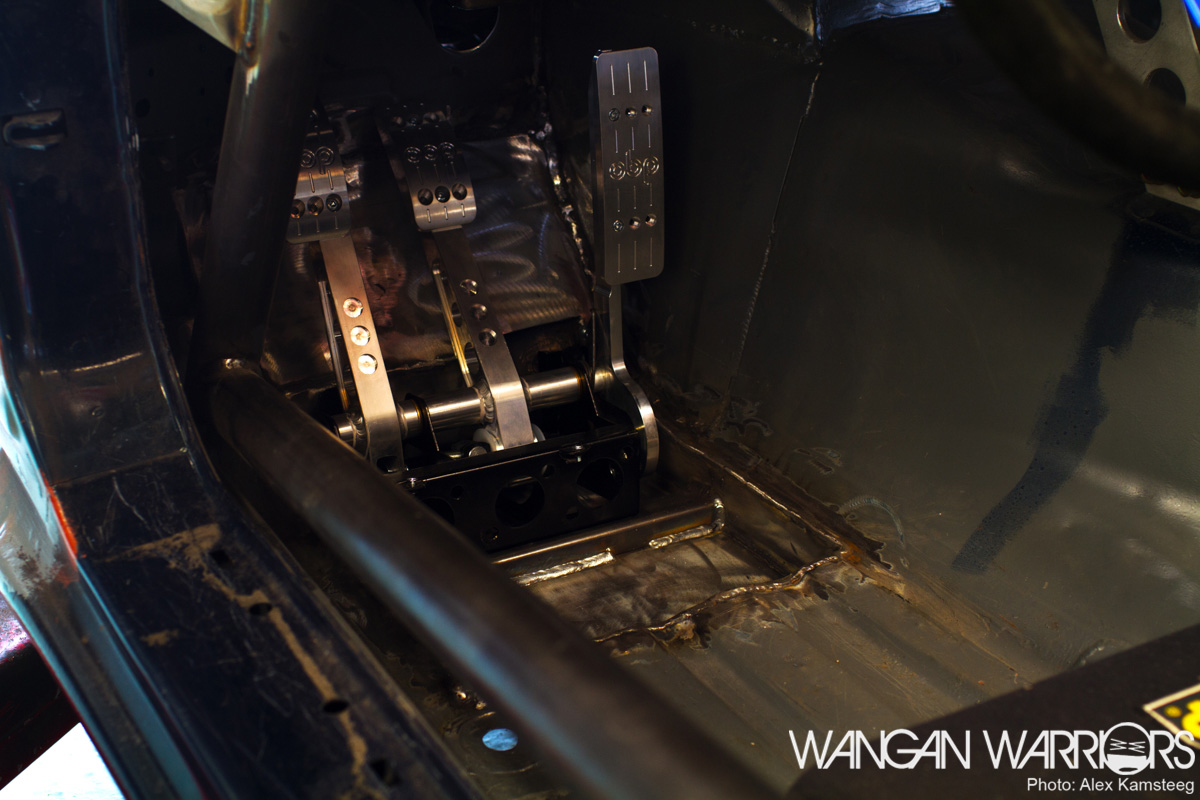 Because the pedals from the Mazda wouldn’t fit anymore they were replaced by a pedal box from OBP. Unfortunately that wouldn’t fit either, so Dennis decided to lower the floor. He already did the same for the seat to make enough room so his head wouldn’t hit the cage. 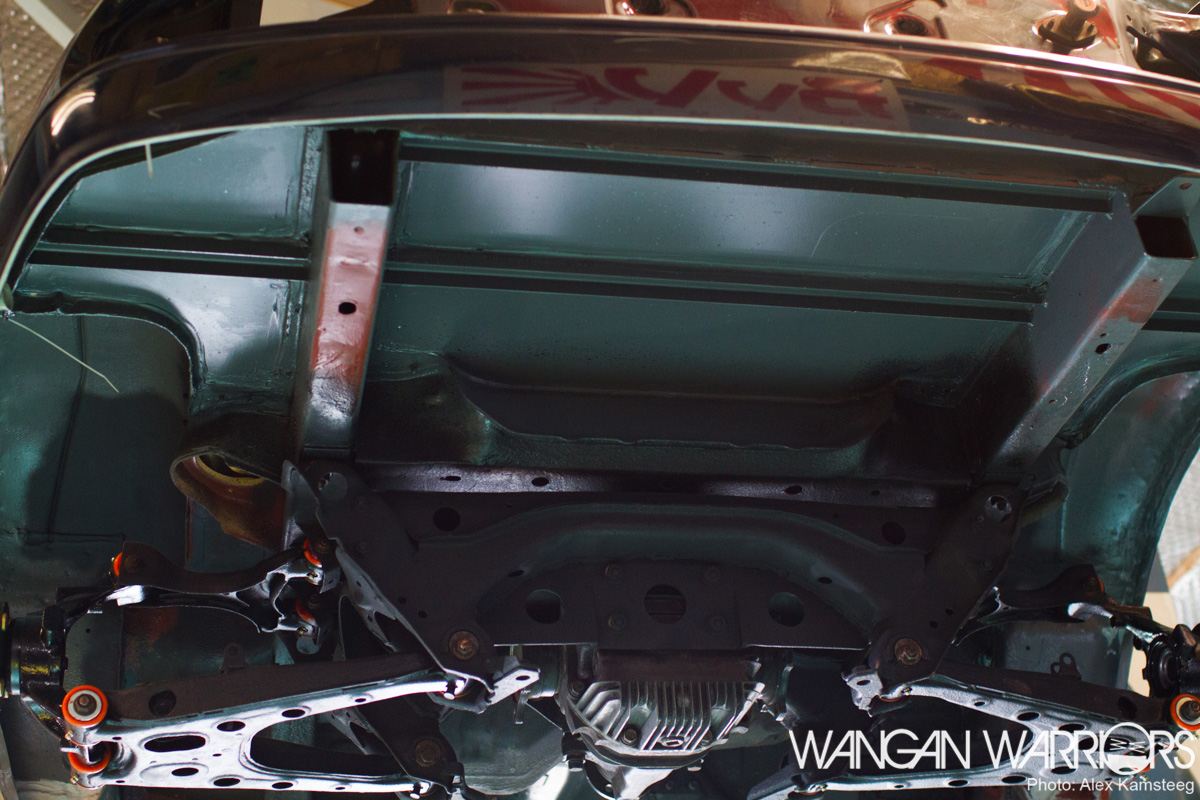 The floor of the boot was modified too. The space for the spare wheel was removed to save weight and a new floor was welded in place. Because the weight balance of the car is obviously quite upset with the far heavier engine in the front Dennis plans on running a large wing to keep the car stable at higher speeds. This new floor can handle the pressure from such a wing. 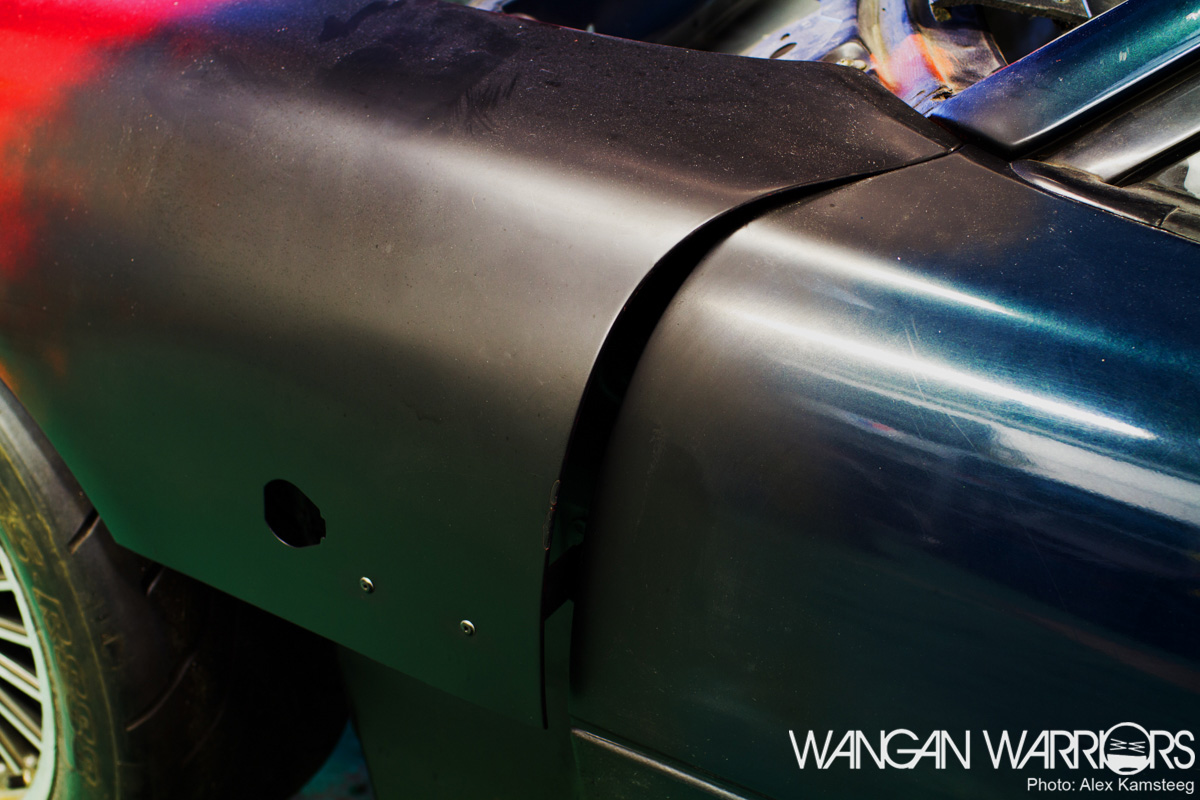 Besides the obvious NA to NB front-end conversion the exterior got some attention too. To accommodate the wide tyres Dennis pulled the front arches as far out as he could. This result in a five centimetres wider car on both side, with the open space between the A pillar and arch aiding in avoiding high-pressure zones in the wheel wells. 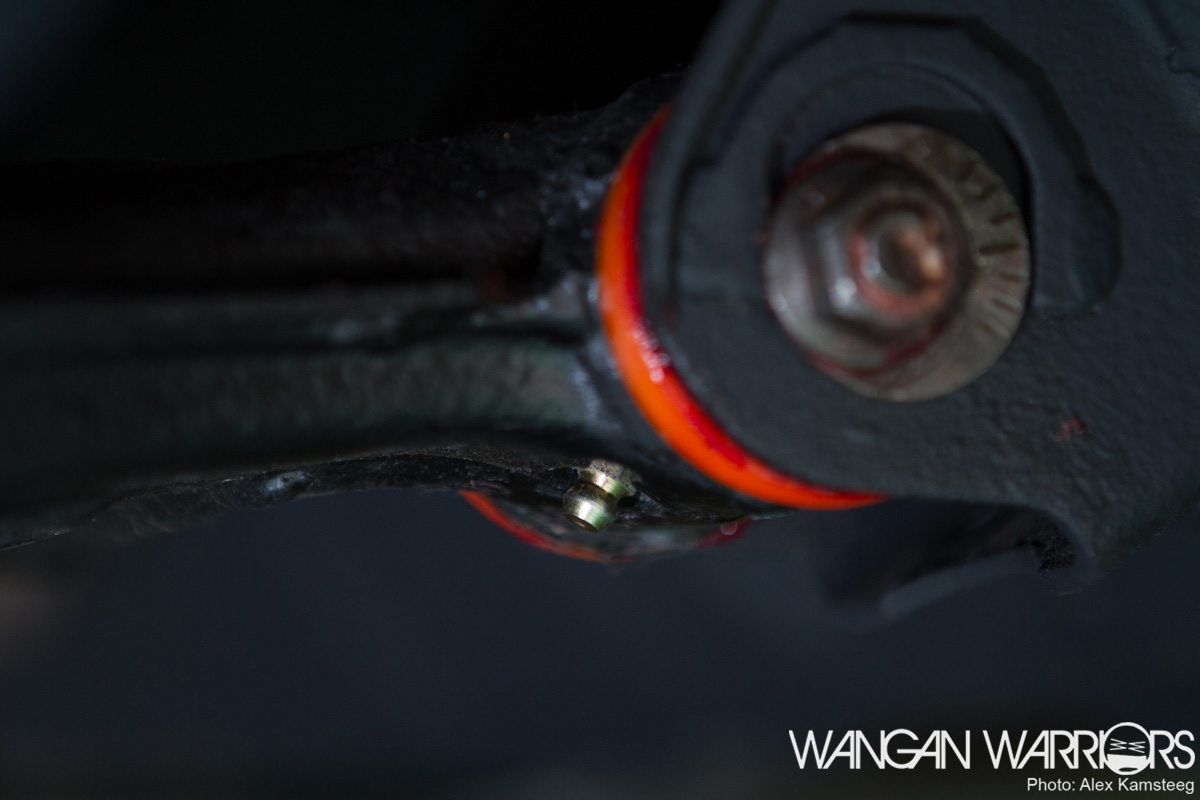 The suspension wasn’t left out either. All the arms got a fresh coat of paint, all the brake lines were replaced, new bearings were sourced and all the bushings were replaced. To prevent the bushings from prematurely wearing out Dennis fitted nipples to all of them so he can keep them lubricated. 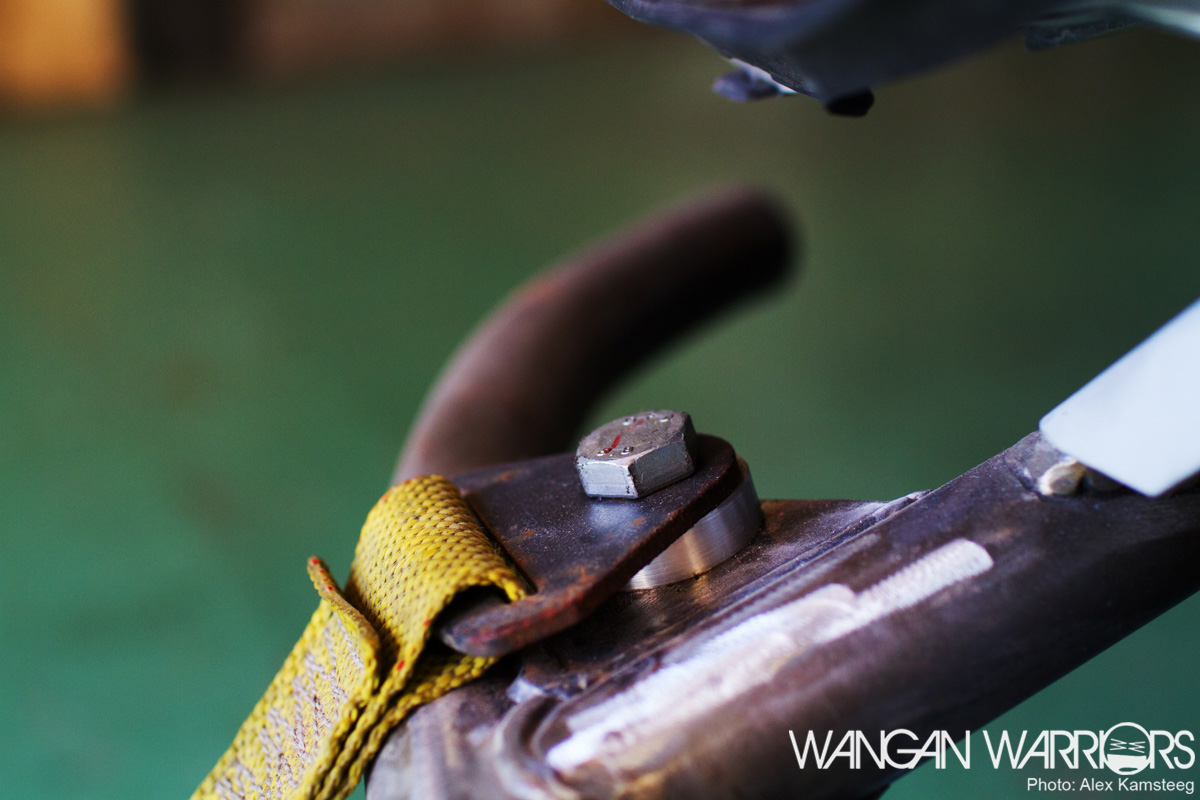 The car is still in a rough state, proudly showing off its Nissan heart and younger brother’s front end. Just like the in classical depictions of dr. Frankenstein’s monster, it’s clearly visible that not all parts originally belong to that car. But with the sheer level of craftsmanship and attention to detail already visible in the build it’s easy to imagine how it will look like when it’s finished. Especially with the almost factory-spec looking Swift in mind. 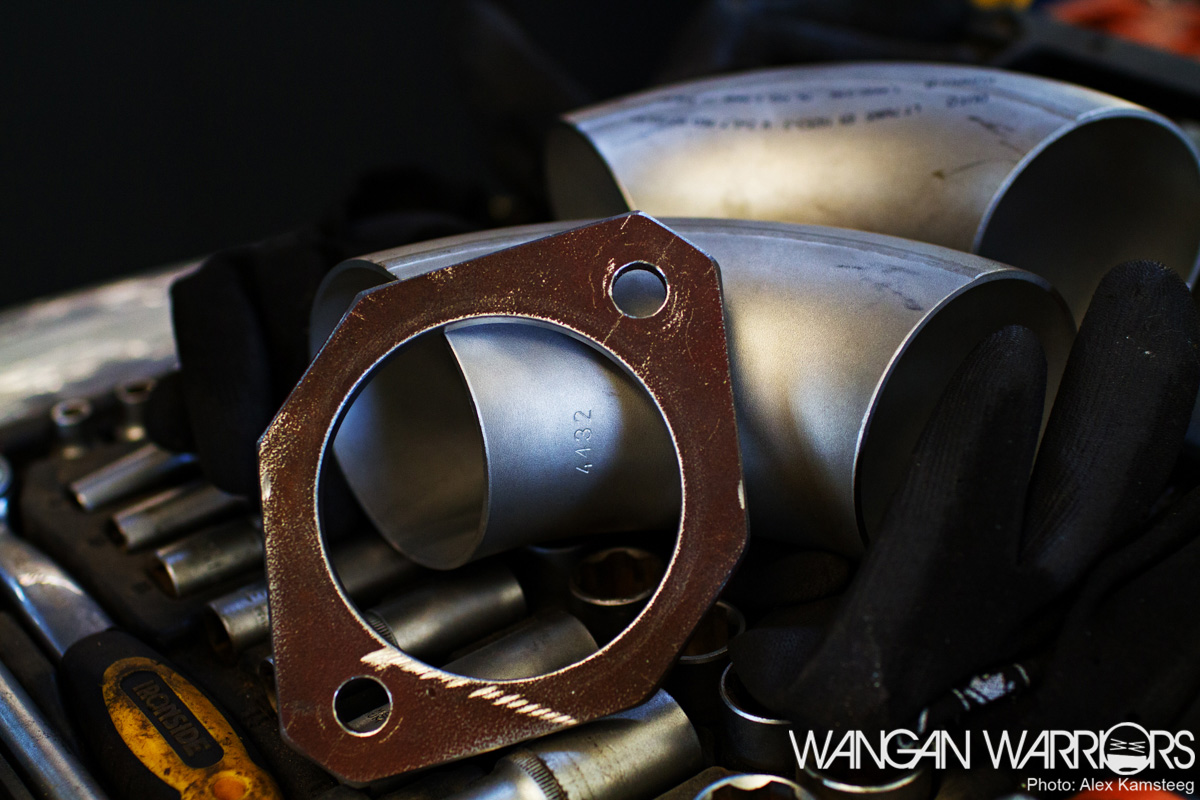 I’ve been following this build for a few months now, and if you’re a forum member you can do that too, and I visited the brothers’ shed two times to document the progress. And every time I’m mind boggled that someone can build something like this in a shed somewhere in a tiny quiet town in a rural part of the country. 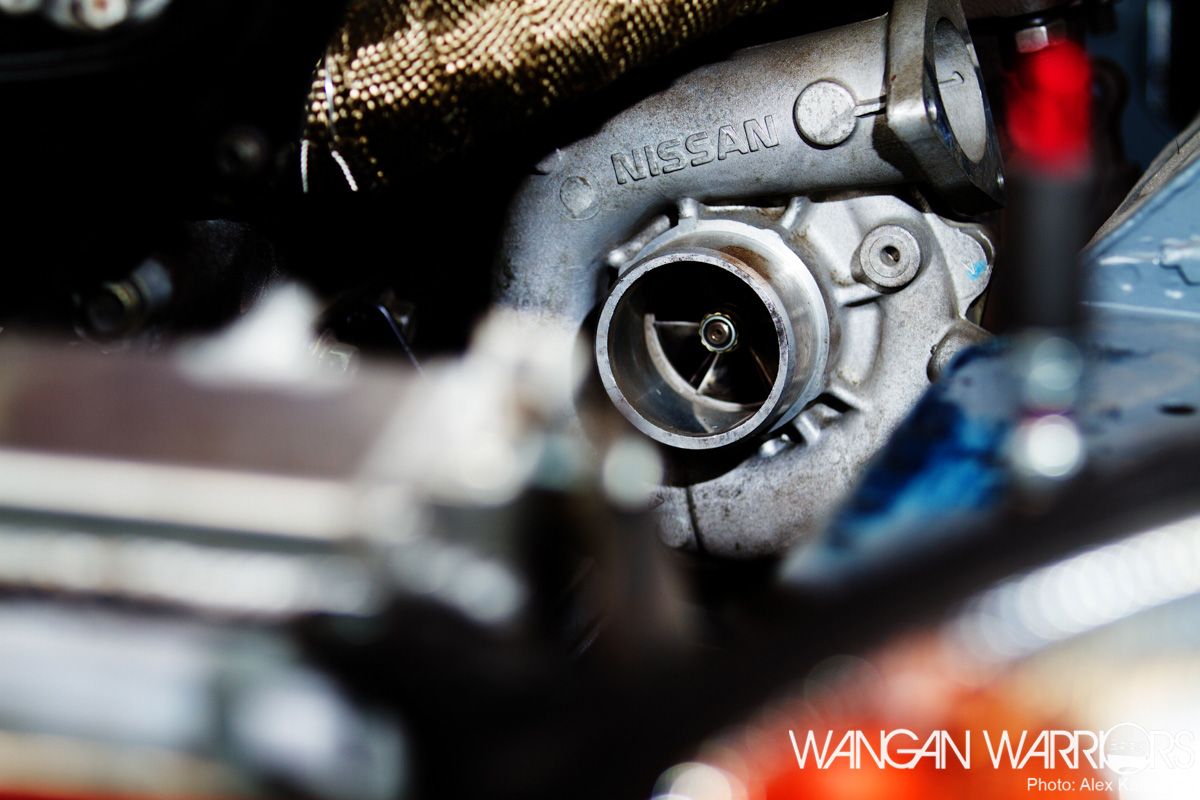 Of course there’s a lot that needs to be done. A shortened and reinforced prop shaft just arrived, the engine needs to be mapped, the interior is still far from finished and I didn’t even mention all the other parts Dennis already fabricated like the custom sump to clear the subframe or the machined tubes to fit the hoodpins on. But I’ll keep those for the next time, since we fully intend on keeping you up-to-date with the progress of this build.

And about that Swift, did I say it was finished? I lied, of course. Are car like that ever finished? Niels has quite some plans with it so I guess I’ll have to give you an update about that car too someday.