There are people who love the attention, live for the fame and hope their car is captured in every shot taken at an event. On the other hand we have those that will not appear at shows at all nor do they spam their projects except on one, or maybe two carforums. Both of those people have every right to do whatever they want. The first person might provide us with awesome photos and video material shot by some of the best photographers of our scene and the latter just surprises us when we least expect it. 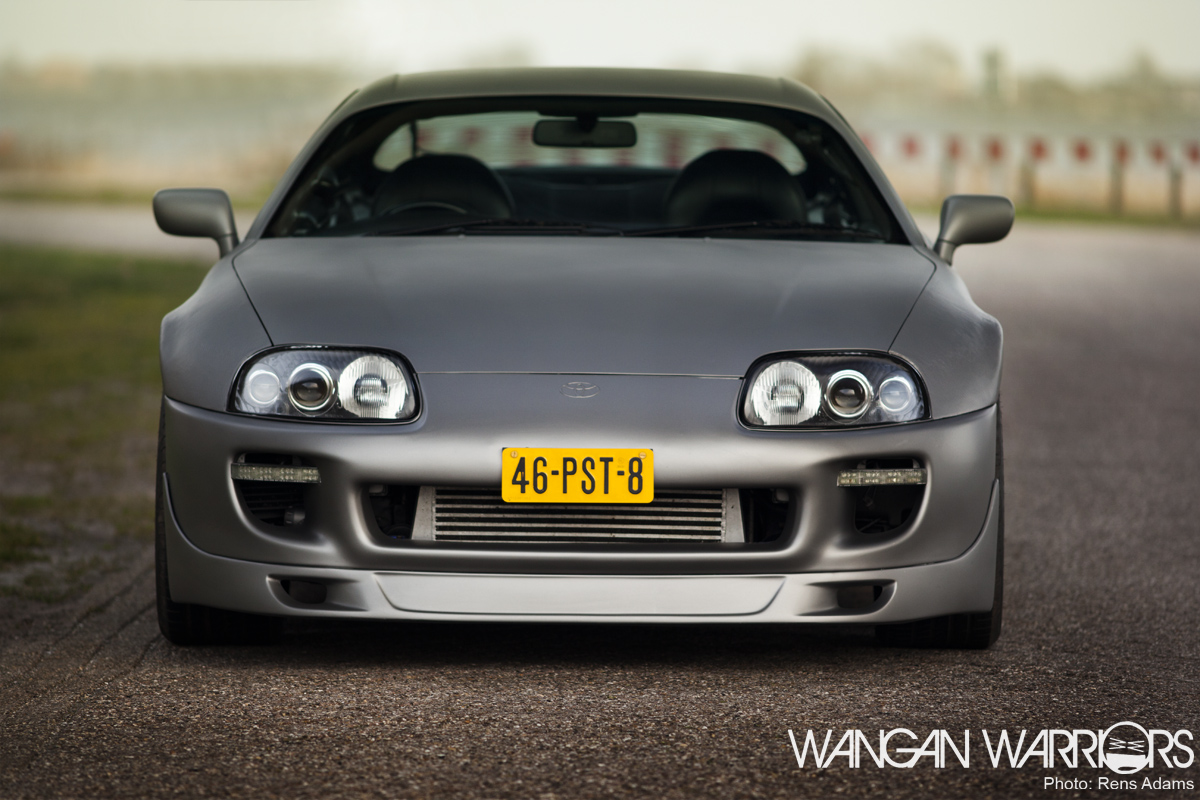 That second description applies for someone I met a while ago. I’m talking about Rienk Sybrandy, friendly lad, humble but very social and he surprised me with his project on the Wangan Warriors Forum. We always have our eyes open for creativity wether it be for new crewmembers or creative and impressive projectcars to capture for your entertainment. 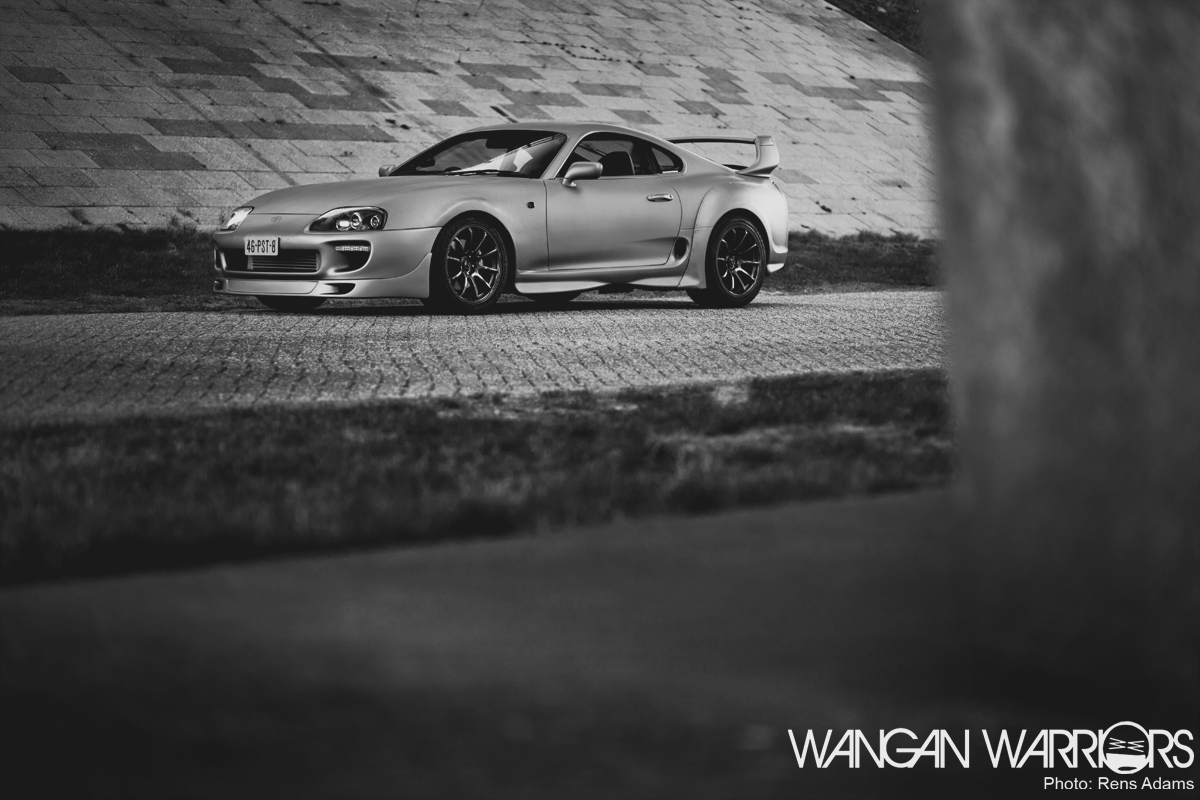 Rienk drives this impressive looking Toyota Supra which is dipped in a custom colour of metallic mixed with black. The Toyota wears a Ridox jacket meaning it has an epic custom carbon widebody kit. The Supra was first brought to my attention by clubmember Vincent and at that point the car was still in it’s original black paint. 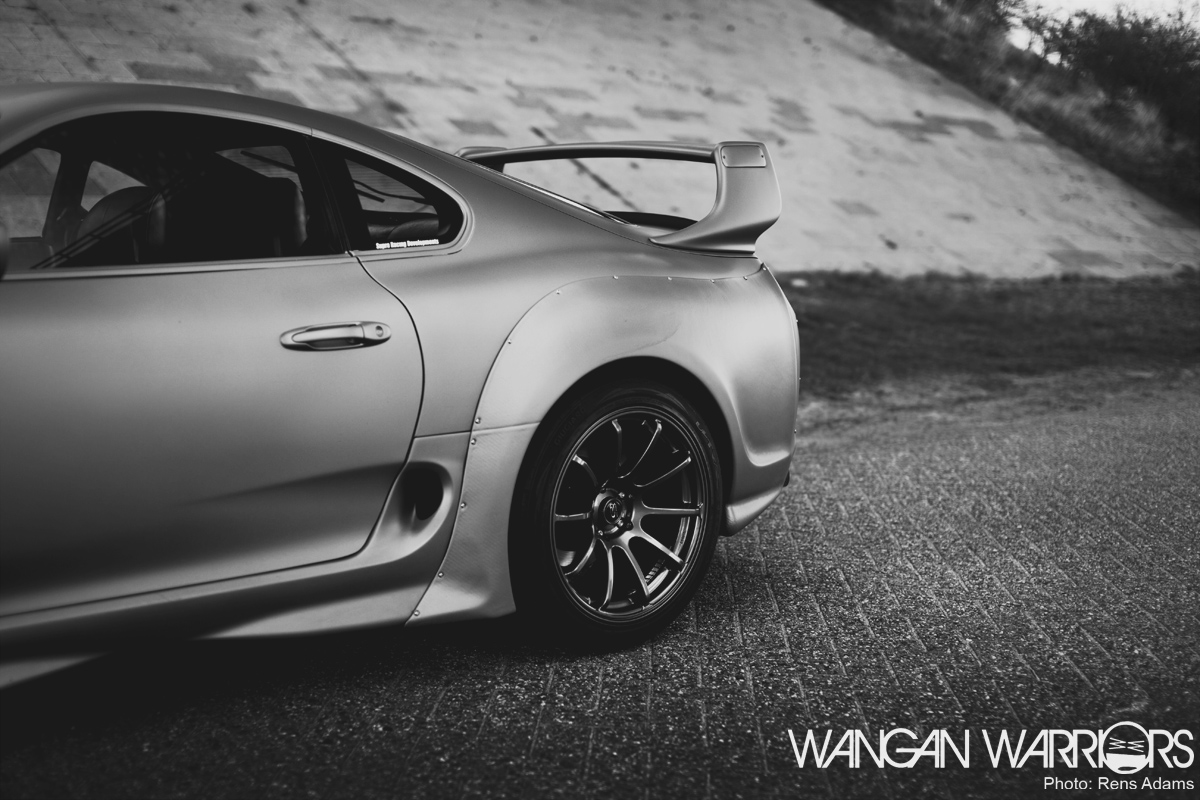 The rear widefender panels were still in the unpainted carbon look which already looked really agressive and daring. There are not to many Supras out there which have a completely modified exterior. The model is timeless and violent looking from itself but it takes a creative mind and a decent amount of change to give it that tad extra which leaves a lasting impression. 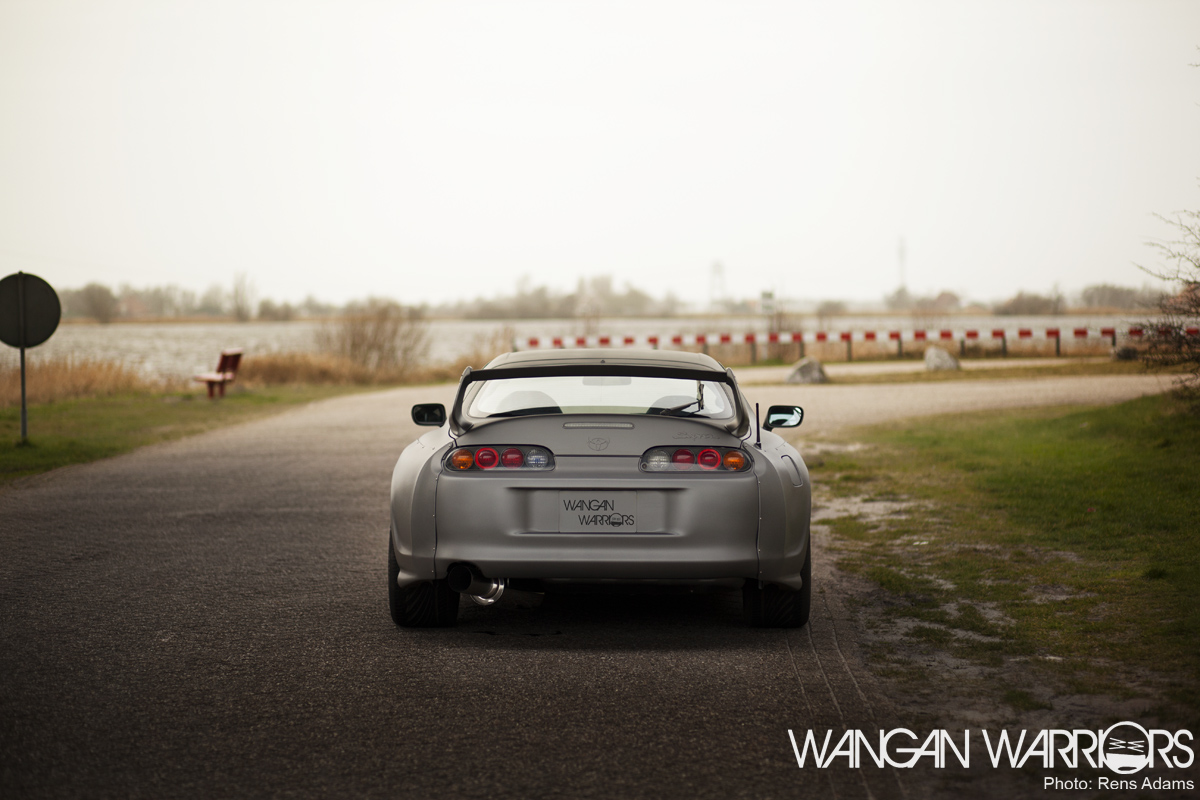 As you can see the Ridox kit does make an ass look fat but this is the fat ass which nobody minds looking at. I definitely believe a kit like this has the same style impact as a Rocket Bunny would have on other models or even a Top Secret kit on a Supra. 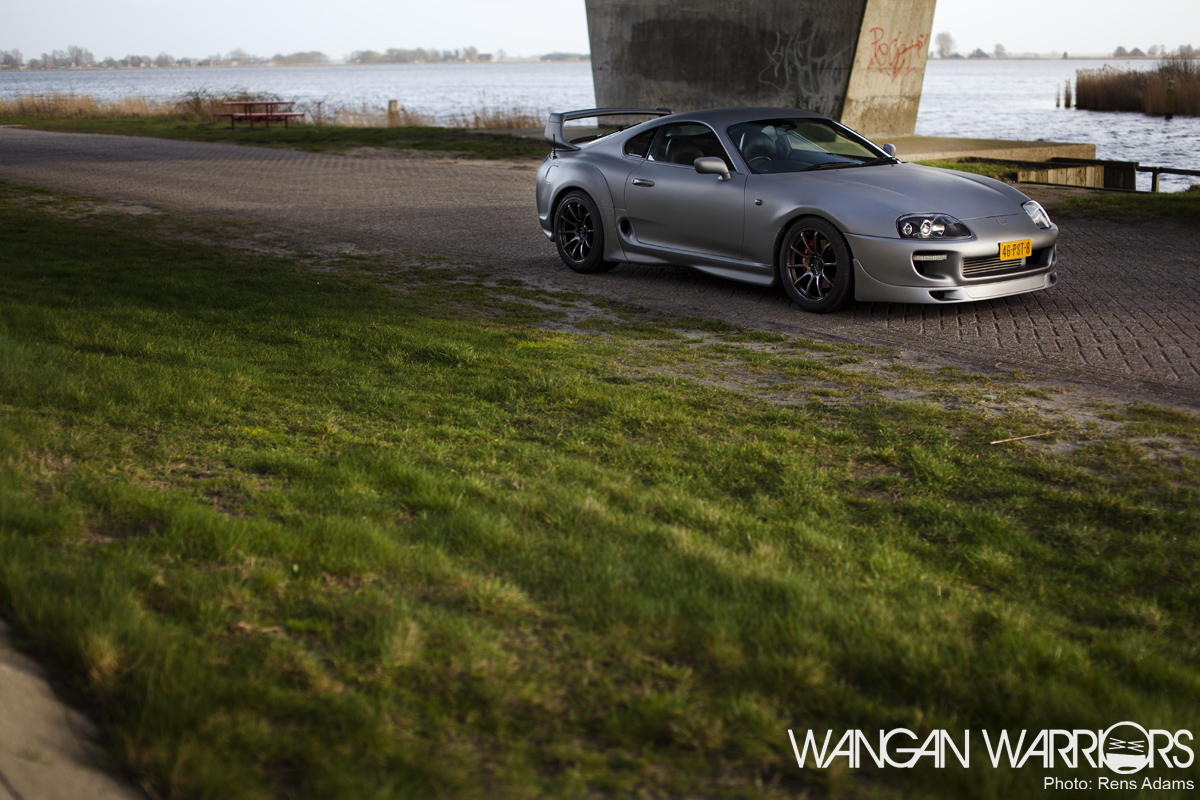 Rienk does still have the stock bumpers and sideskirts on the Toyota but they certainly look perfectly matched up with the rest of the body transformation. The front bumper was fitted with a RMM lip which really looks suitable for the face of the exterior. 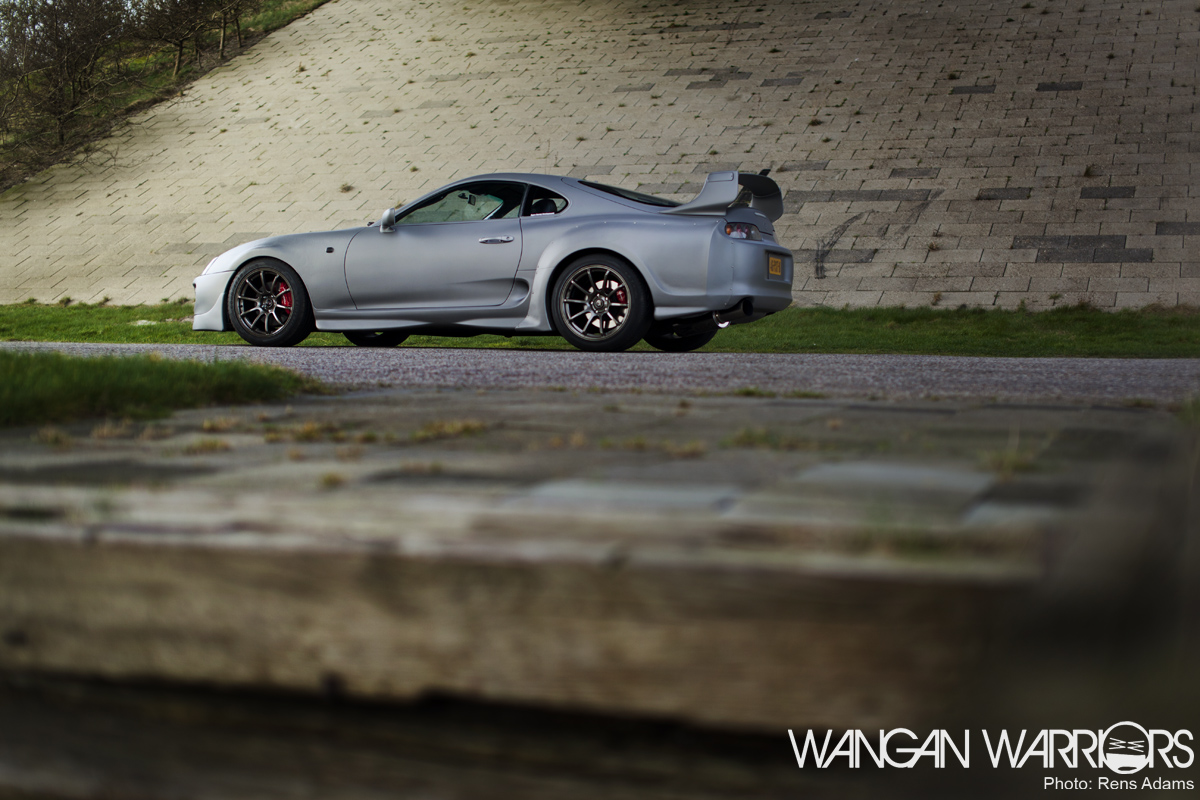 With the exterior having a race influence look, it’s not common to put a Supra chassis on the ground. The Supra beholds a fair amount of ground clearance where function becomes the most important part of the project. BC Racing BR Series Coilover set was a perfect solution for Rienk to achieve the perfect ride-height. 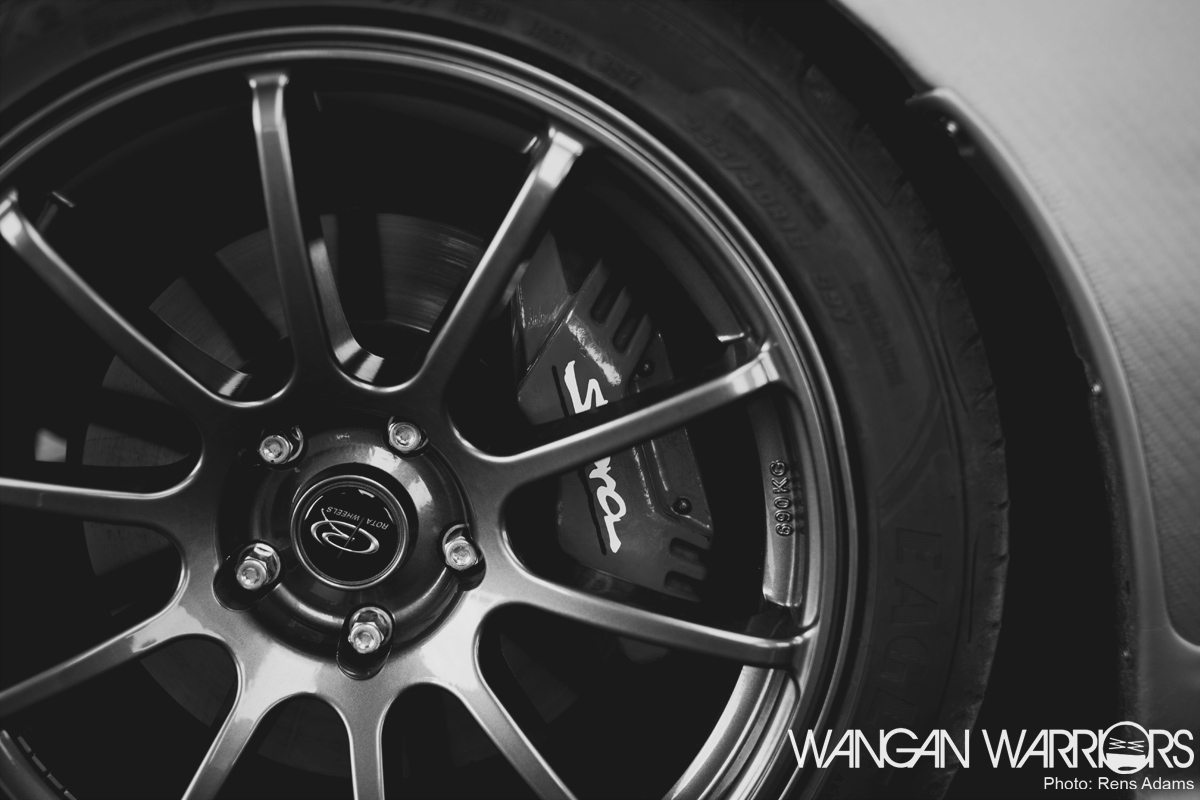 The Rota Force Drift wheels are a nice choice of slippers, nothing overly fancy, no showstopper but just a decent fit for the rest of the body and a finishing touch of the exterior if you ask me. Even though this car would have quite some people drool over it on a car show, it wasn’t built with the intention to be a showcar. 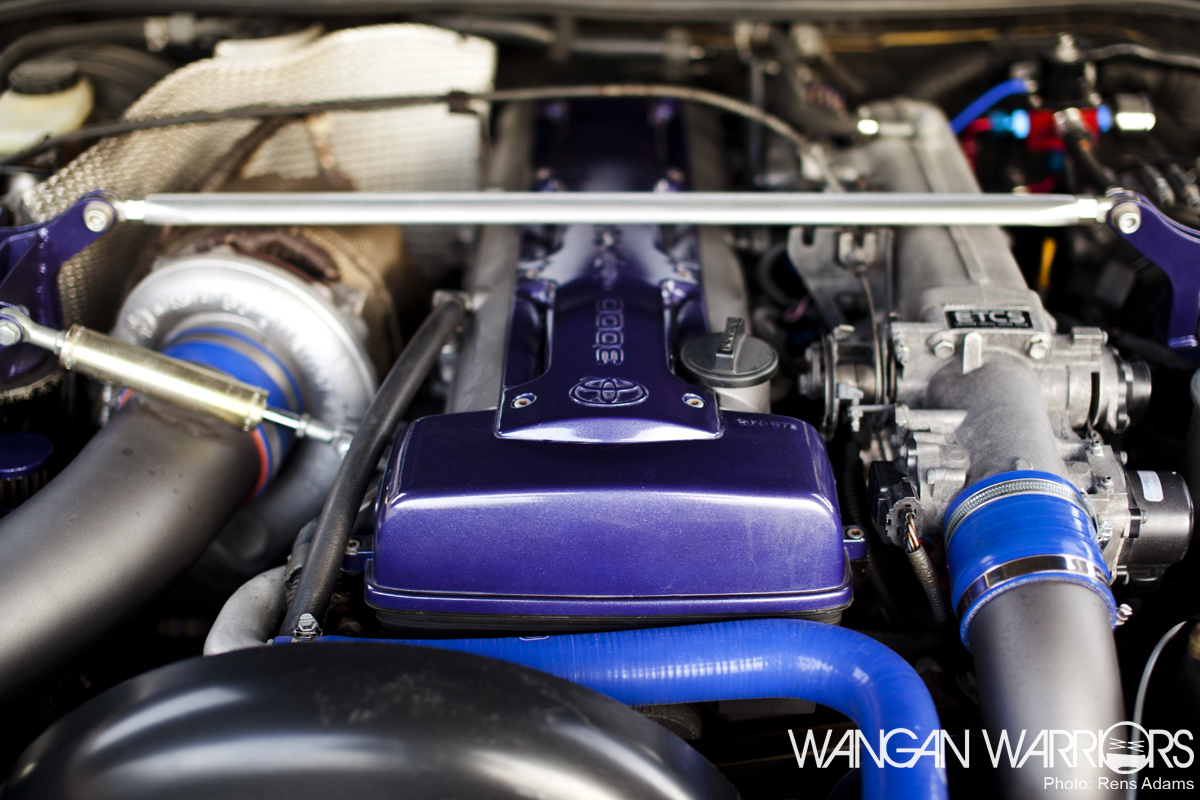 Stupid as I am, I was under the impression that there wasn’t too many done to the engine before I met up with Rienk. I thought the project was still at an early stage where Rienk chose to handle the exterior before touching the already powerful 2JZ under the bonnet. 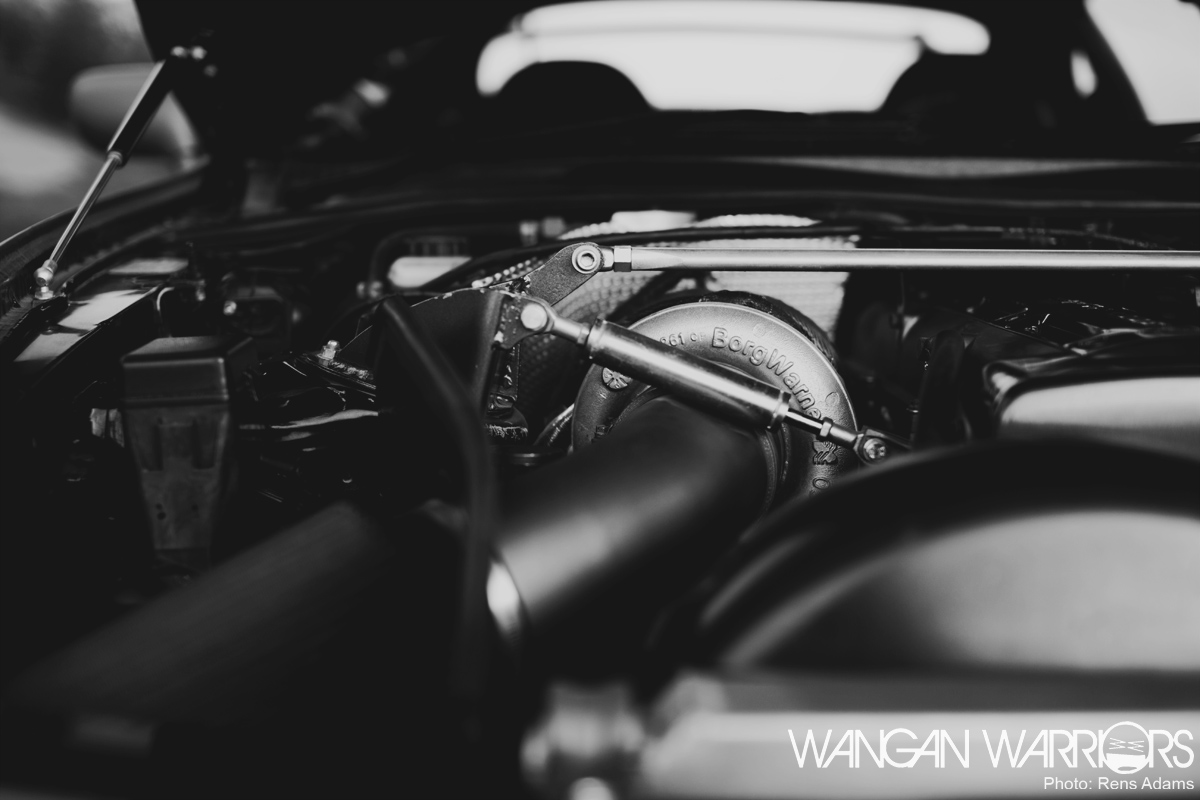 Little did I know, there was a 3000cc Straight 6 2JZ-GTE with a Borg Warner S300 Turbo mounted to it under the bonnet which was already good for a decent 634BHP. And when Rienk is bored he’s working on another engine at home which should run a safe 800BHP just because 600 is not enough. Fair enough though, who needs 600 horses when you can go for 800 right? 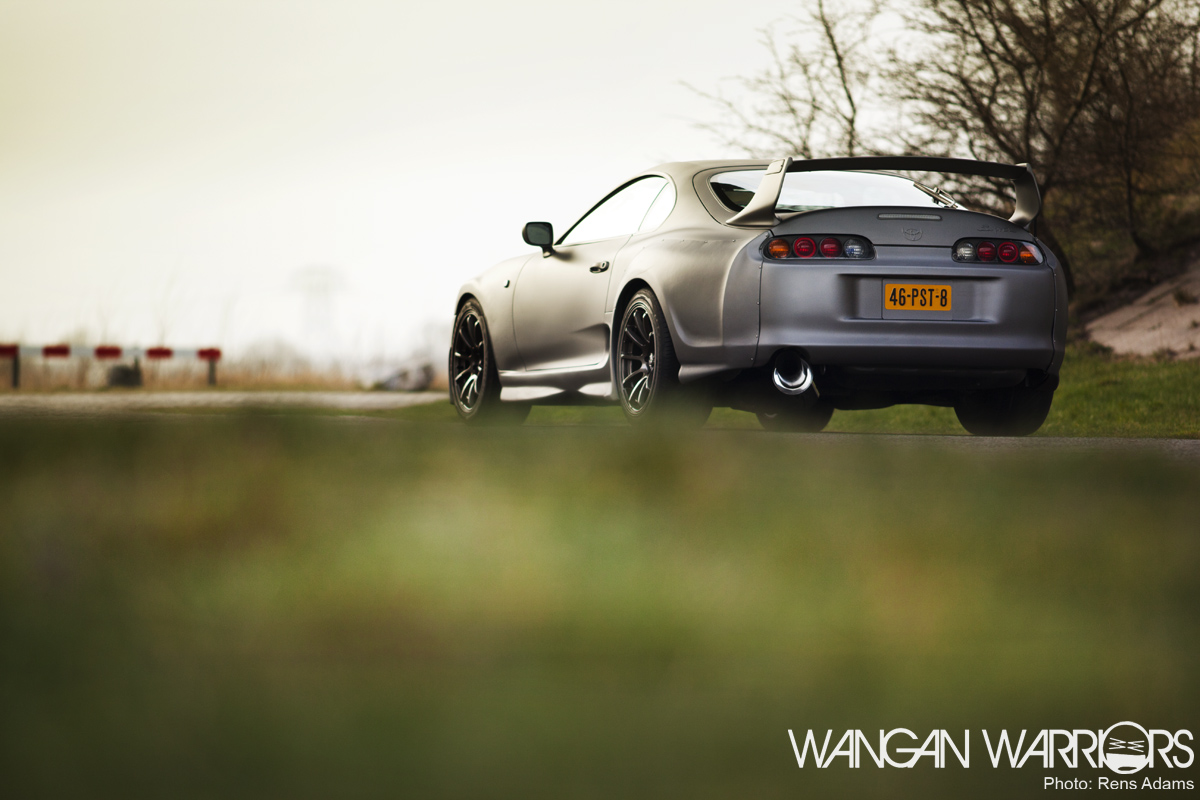 The original rear wing was replaced with a TRD spoiler with a carbon blade and finishes up the fat ass we talked about earlier just fine. You can also notice the exhaust system from this point of view and Rienk went for a Boostlogic twin-scroll heat-coated manifold continued with a mid- and downpipe from the same brand, ending into the Whifbitz twin box exhaust. Yes, that does sound sweet! 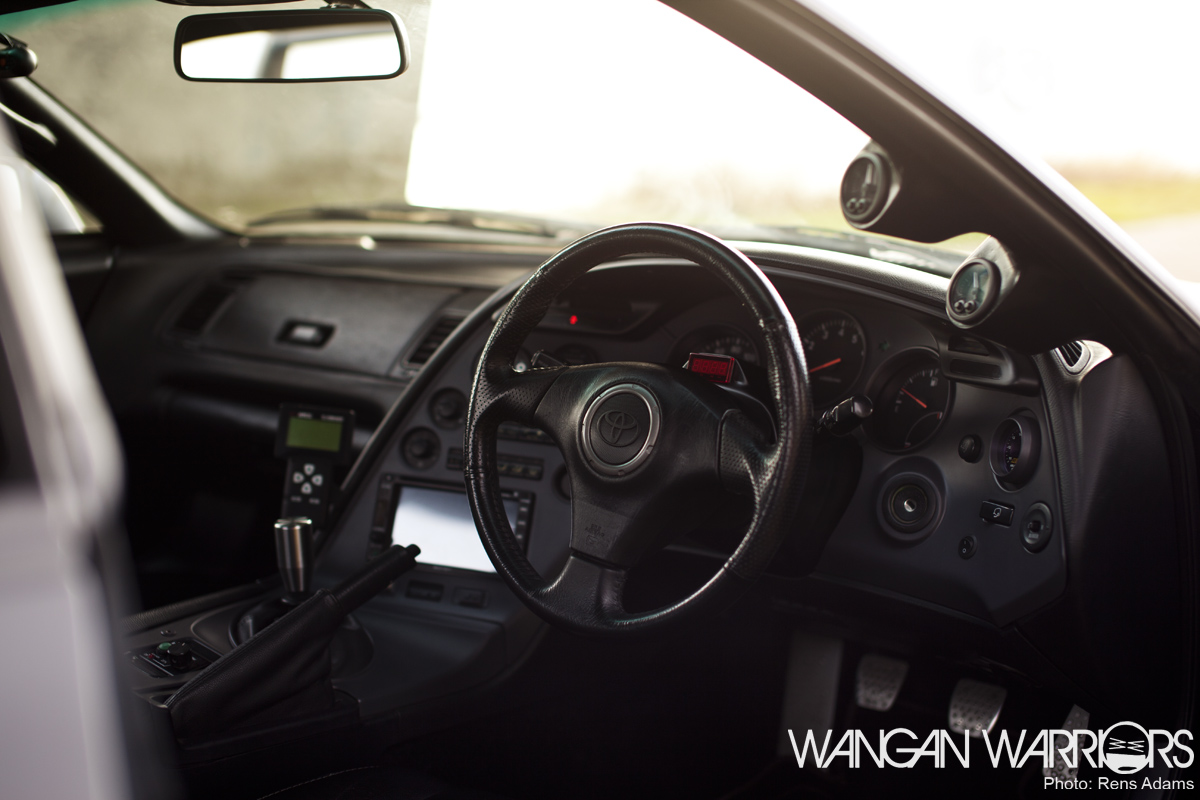 We must not forget to take a quick look at the interior. There is only one thing to say about the Supra dashboard and that is that it’s insanely awesome. You really have the feeling you’re in a cockpit. Rienk installed several Stack gauges and an Apexi power FC to be kept informed with all the metering and adjustments. 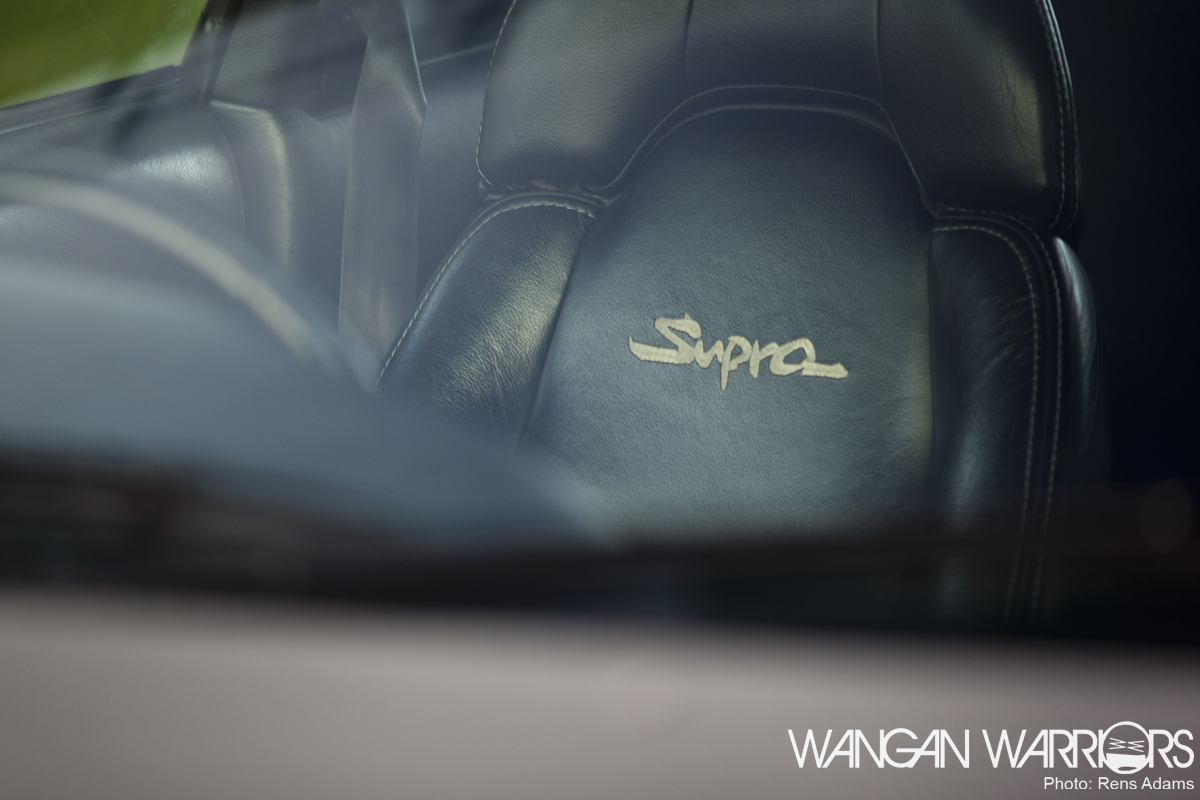 I think the Supra still has a fair amount of its comfort left. It has the Toyota RAV4 steering wheel, the seats are retrimmed and draped in black leather with silver stitching. A streetcar with comfort and style which is able to violate any prey at any given moment. I love it! 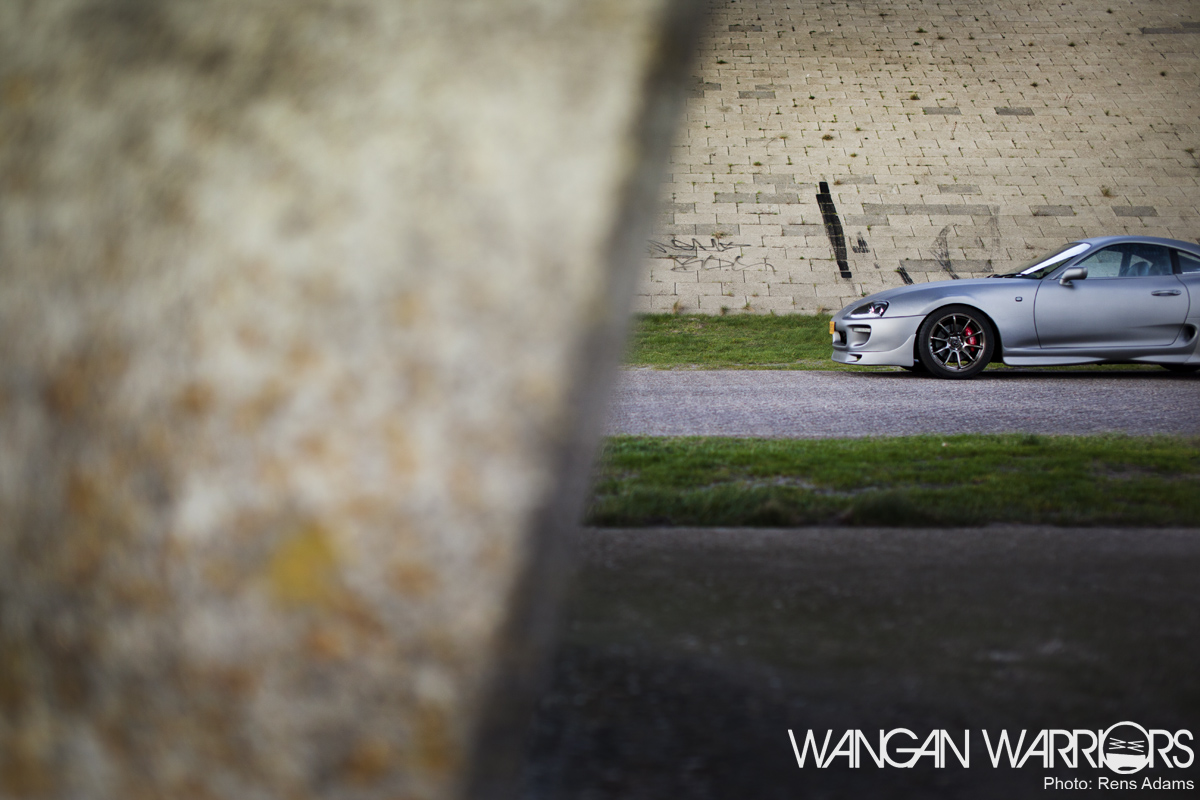 There is a big speclist at the bottom of this article so you can check out all the important parts Rienk chose for his Toyota. We always have a big amount of information to process into an article. I usually point out the main parts and modifications and add the rest of the info in the list below for those readers who are interested in certain details. 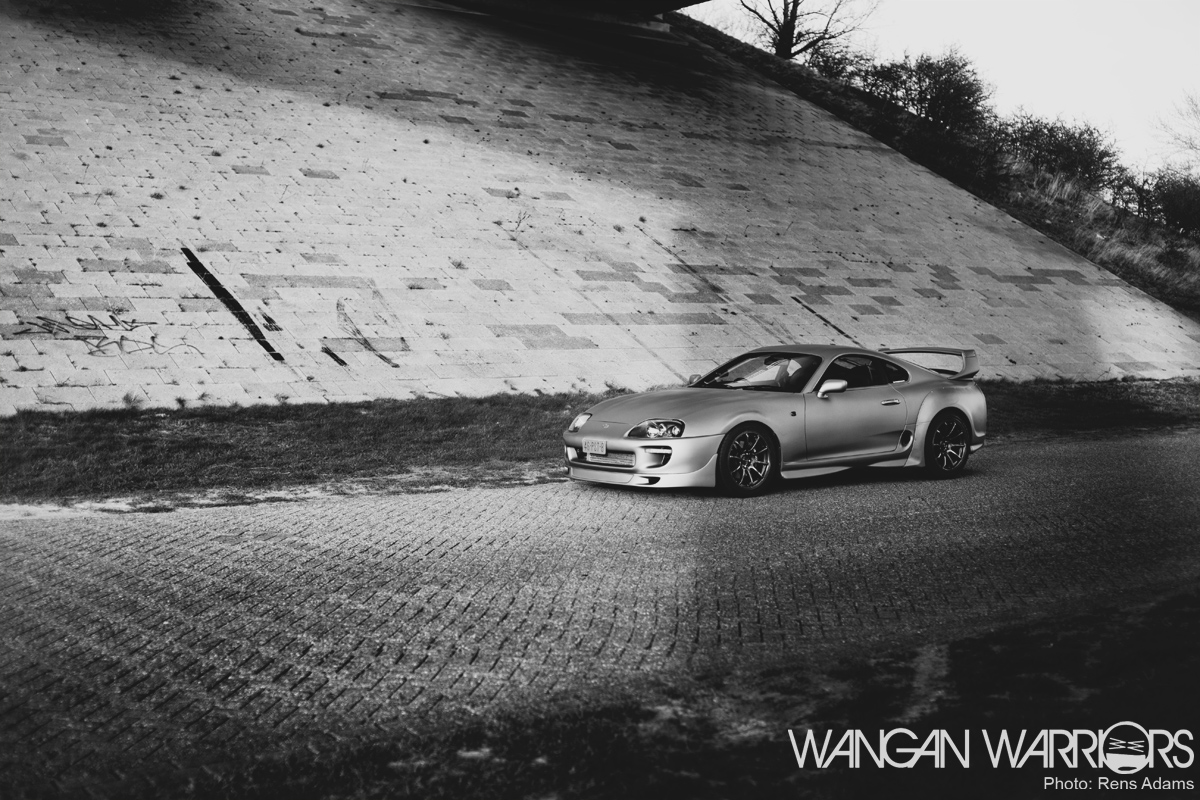 As I mentioned, Rienk is not really a visitor of car shows nor does he aspire to have his car in the spotlight that much. I’ve also been told that the Supra will possibly look completely different next season so this article might be the only way to admire the Supra as it is right now. Hopefully you’ll find some time in your busy schedule to visit one of our future events, Rienk, we would be honoured. Thanks for your time for the photoshoot and I sincerely hope you like the shots!