A few years back I visited a big car event with a few guys from the now defunct Grunnmeet car club. Just a few months prior to that, two brothers introduced themselves on the forum of that club and they said they would come too. And on the day of the event they showed up in an old Suzuki Swift, with a very tiny one litre engine. 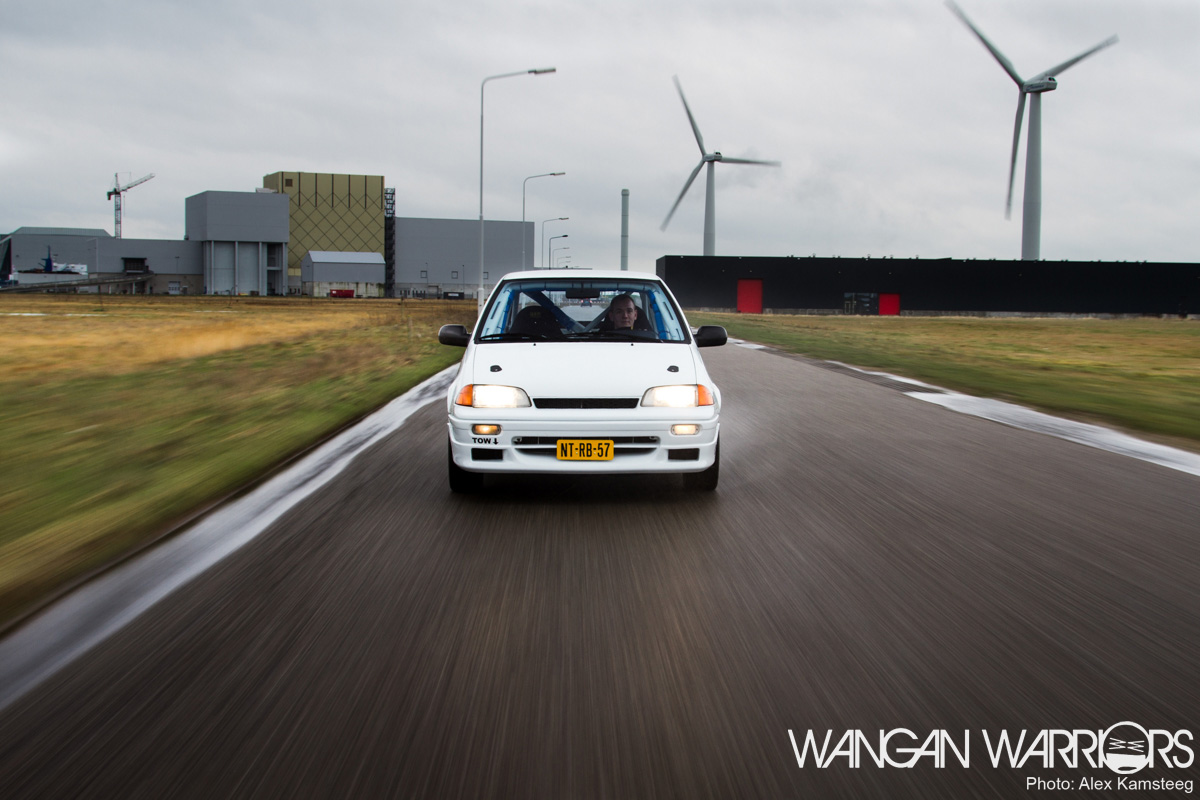 Not that it mattered though. Grunnmeet was a club without rules, if you had a car and you were passionate about it you could join and come to events. And well, both brothers were passionate, very passionate. When they lifted the bonnet of that weathered looking Swift I saw a cute little turbo attached to that engine. The younger brother and owner, Niels, was rather vague about power figures but according to him it was “quite fast”. 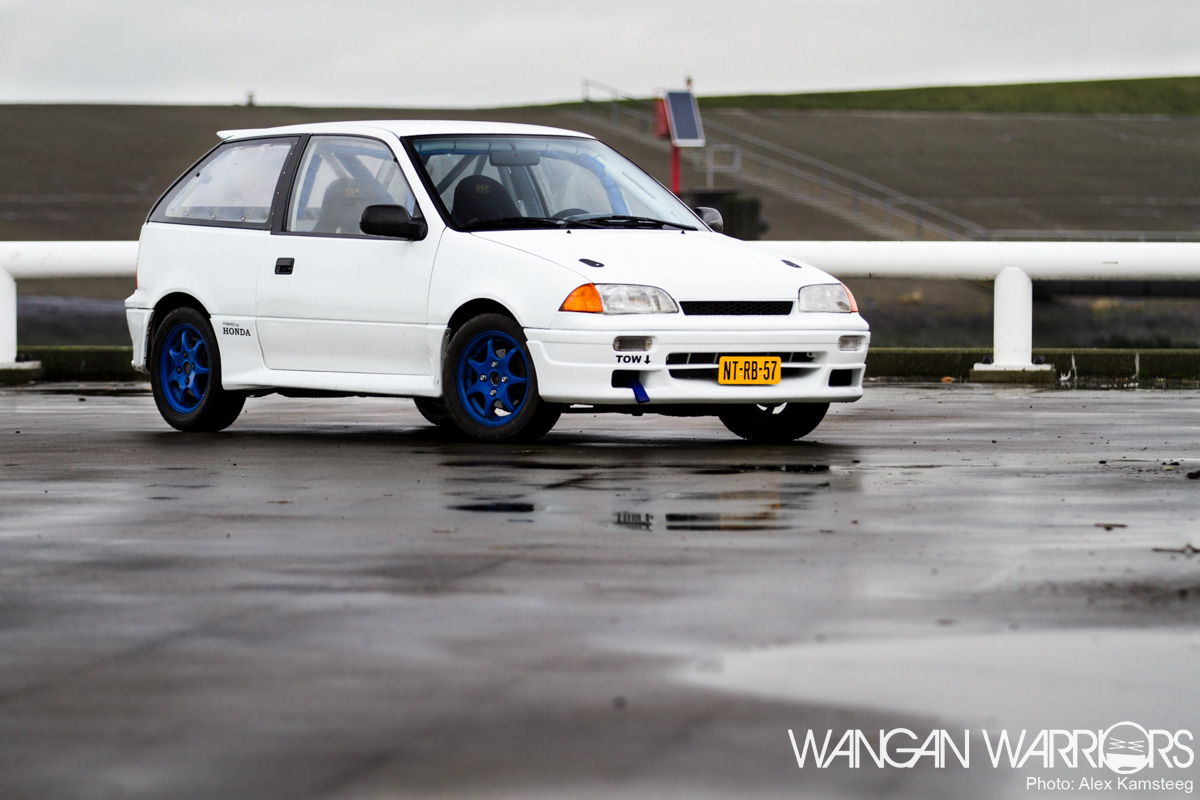 After a few years the club began to decline, as with so many clubs, because of shifting priorities. Getting married, buying houses, kids, you all know the stories. I more or less lost track of the brothers, we sometimes saw each other on meets and of course there’s always Facebook. But, for some time the Swift was out of my sight. I almost completely forgot about it for a few years. 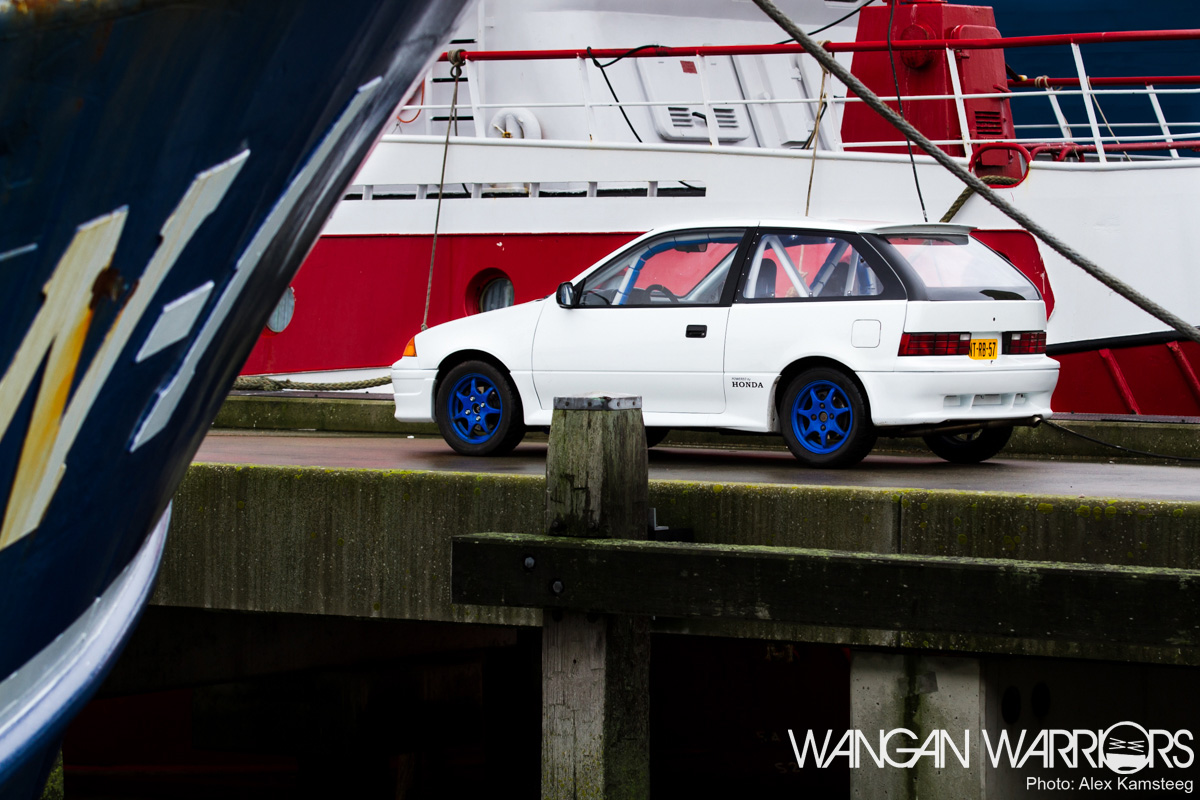 But then it resurfaced. Dennis, the older brother and a fabricator by trade, began posting some updates and pictures about the work he did on that very same Swift. And they mentioned something about a rather interesting engine swap. Something that has been done a few times before here in The Netherlands, but as far as I can tell not with this level of overall quality. 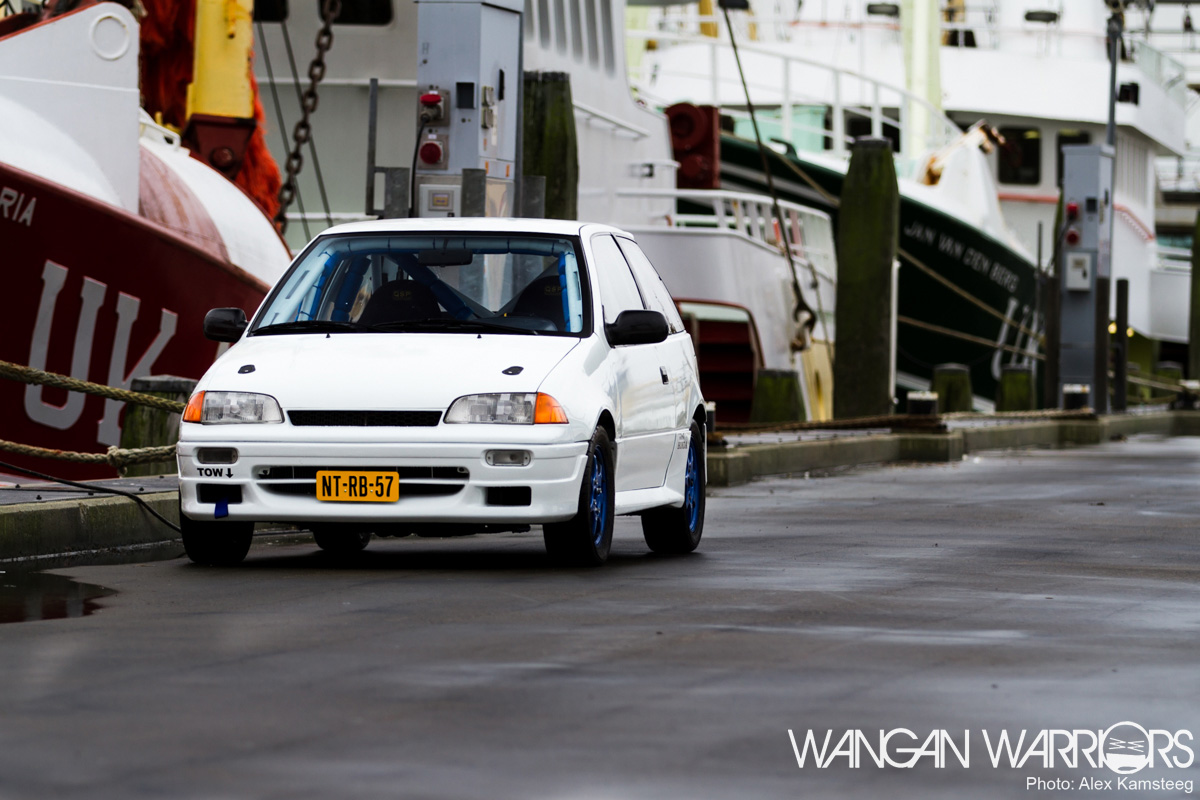 I started following the progress on the build, although updates were scarce and far between. But when I heard the car was ready I immediately contacted Niels and Dennis for a shoot. A date was set, they gave me an address and some driving directions and a few days ago I drove to the other side of the country to their shack. 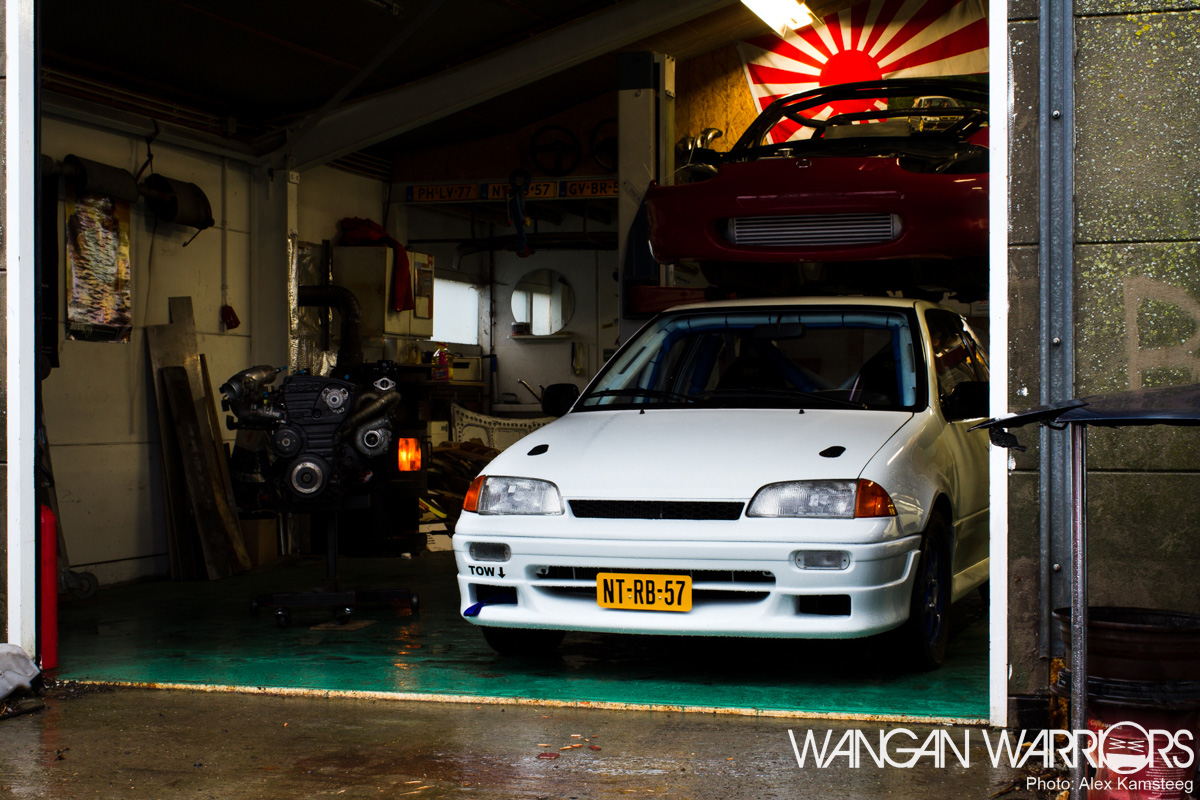 Their shack? Yes, when I arrived over a muddy path hidden behind some other barns and honked the door of every automotive enthusiast’s mancave (or womancave) rolled up. Spacious, a lift, wood burner to keep yourself warm, a toilet and a barbecue. A perfect place to work on cars with your friends and I admit it, as a parking lot wrencher myself I’m a bit jealous after seeing this. 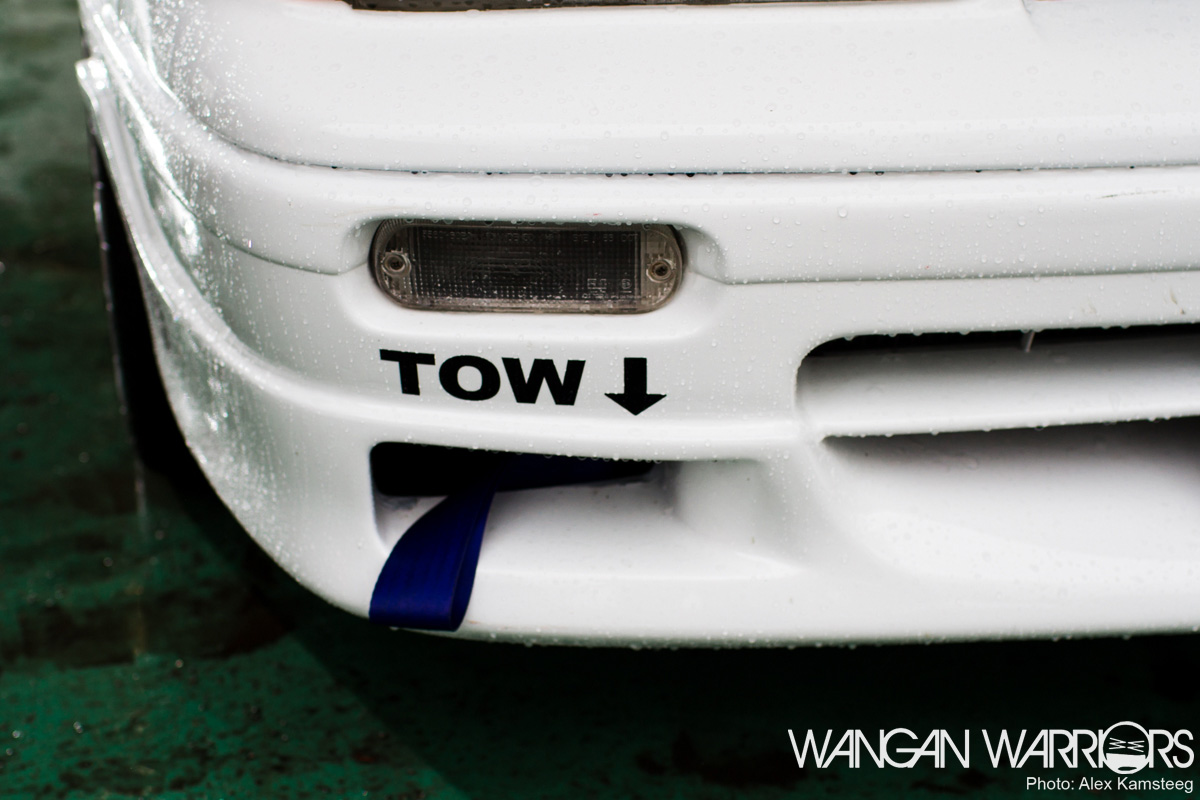 After talking for about an hour while more and more ex-Grunnmeet guys turned up, I started shooting the car. One thing that struck me while photographing was the simplicity of the build. There’s nothing real crazy about it. People sometimes go all out in an attempt to create the perfect car, but Niels took the other road of building a solid base which he can tweak and improve in the future. 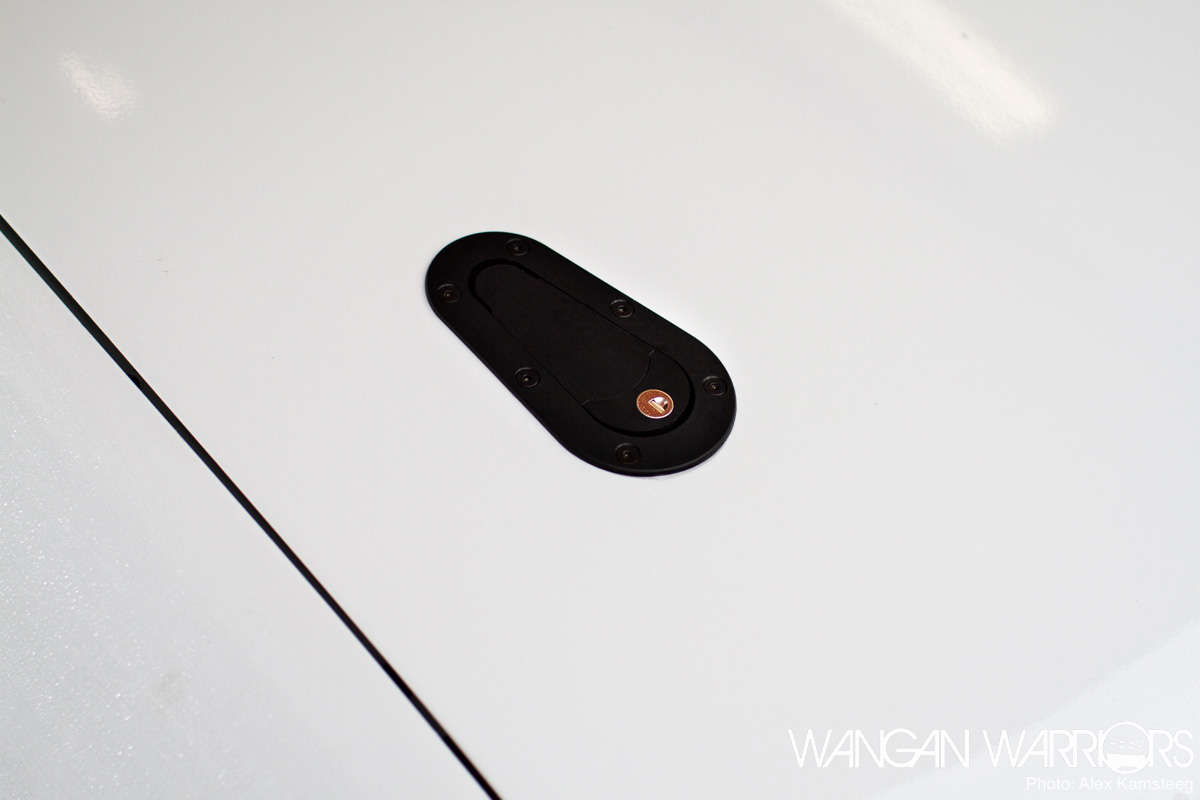 Of course there are some obvious hints to his ambitions with the car. The tow straps front and back, the roll cage, the locks on the hood, it all points to a car build for trashing on the track. Or the Nordschleife, a place which is quite familiar to Niels. Not that it’s a quick and dirty build just for fun, far from that. The attention to detail makes this car a prime example of a shed built awesomeness. 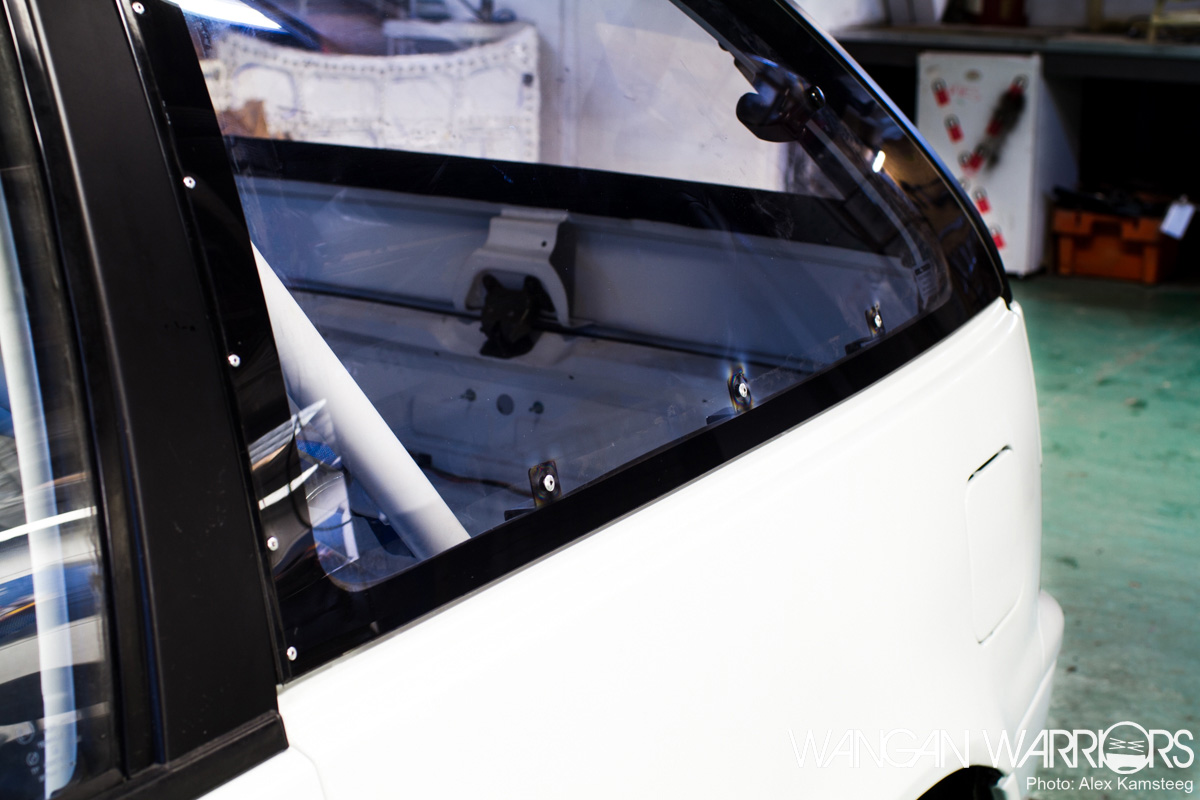 Following Colin Chapman’s famous mantra of adding lightness to add speed Niels ditched the heavy rear windows for lighter replacements made from lexan. He also removed as much metal as he could from the trunk and the bonnet in an effort to bring the weight further down. 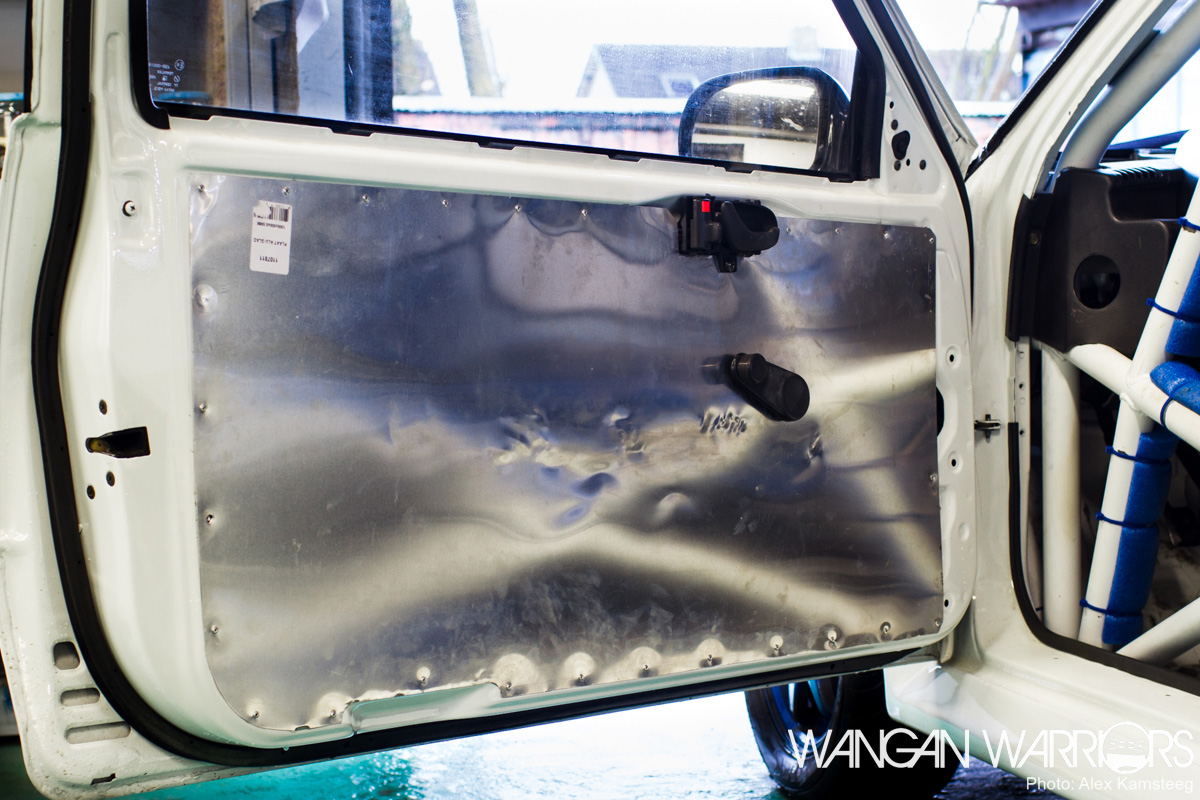 The doors where gutted too and covered with a sheet of aluminium on the inside. The locks and window crank handles were bolted back to their factory original location and are still fully functional. The end result? Very, very light doors. I actually used way too much force the first time I tried to close the passenger side doors and it slammed shut with a loud bang. Oops. 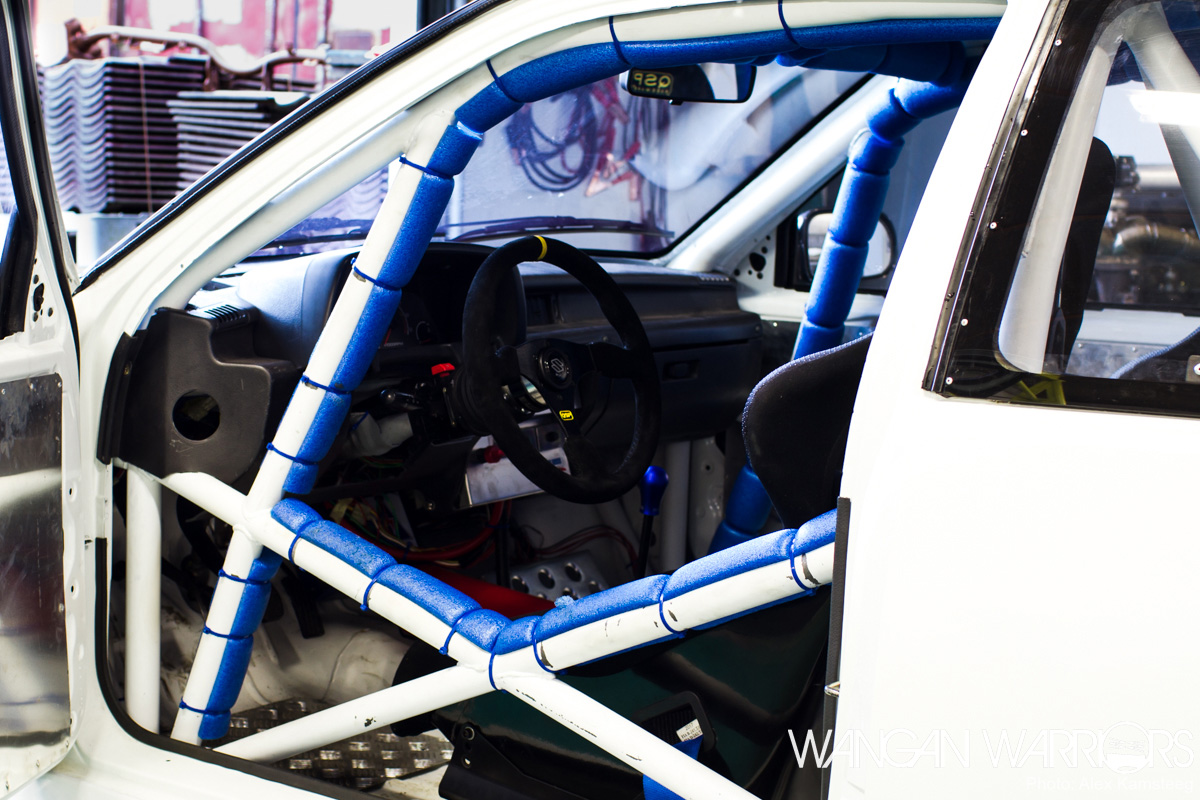 The weight saving continued on the inside, with a complete stripped interior. When all the needless insulation and carpeting was removed an extensive roll cage was welded into place. The roll cage was built by a friend of Dennis and Niels and made to FIA specs. In fact, Niels is planning to get the cage certified officially. Safety first, right? And it’s not only for safety. To stiffen the car the cage is welded to the pillars with gussets. 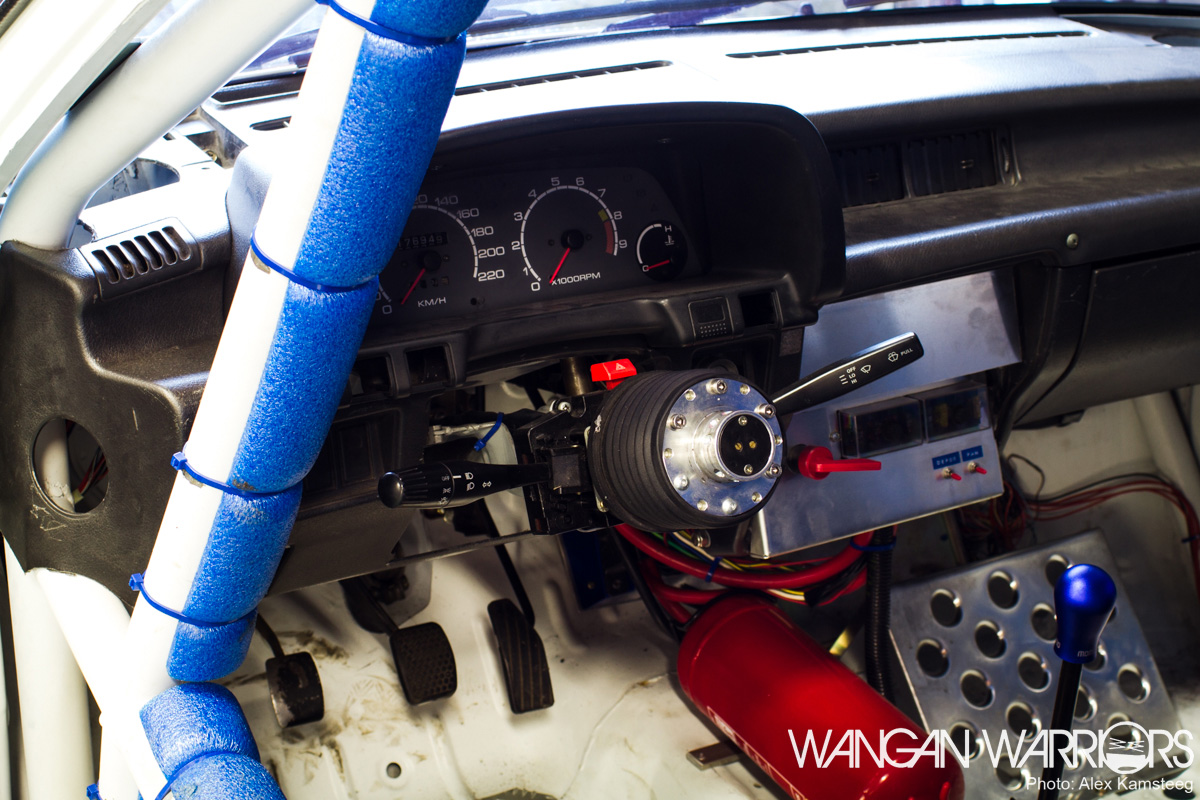 Almost everything was stripped from the dashboard. The heater was removed from the car, but Niels kept the fan for the ventilation. He threw out all the other unnecessary stuff like the audio system and the lower half of the dash and fitted a QSP steering wheel on a quick release mount instead of the stock wheel. 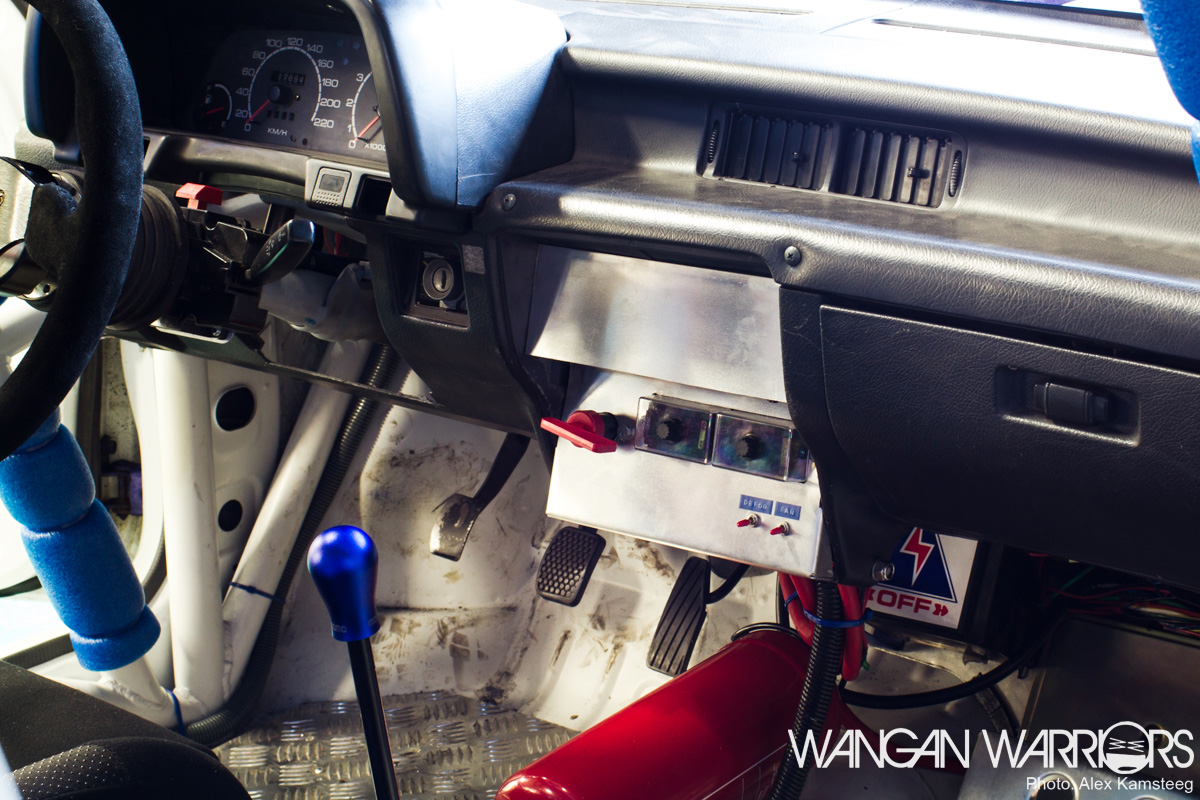 The centre console was removed too and replaced by a new one made from aluminium. It has just the bare minimum knobs and switches, and of course a kill switch. Niels fitted a fire extinguisher on the tunnel just below the dash. You hope you’ll never need it, but when you do need it it’s better to have it in arm’s reach. 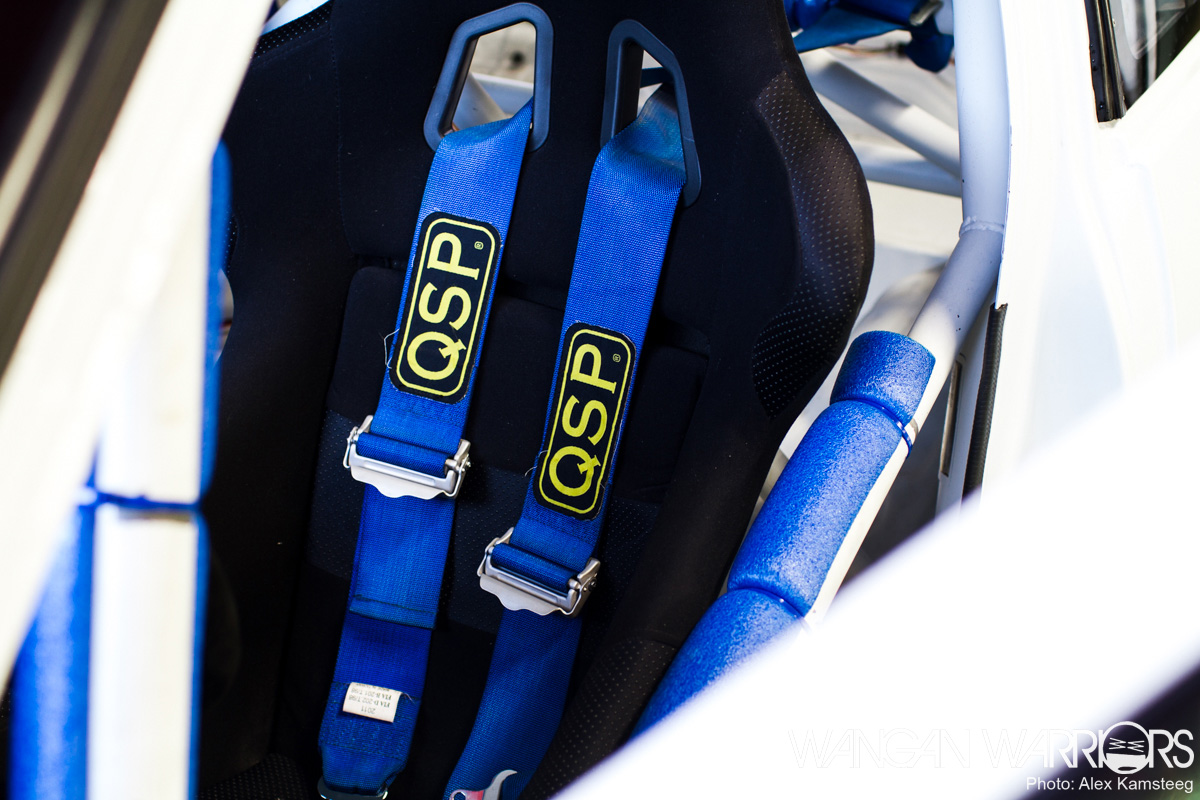 For better seating the old heavy chairs were thrown out and replaced by light weight QSP bucket seats. To keep the blue-on-white theme going and to securely strap the driver and passenger in place a set of blue four point seat belts was fitted. 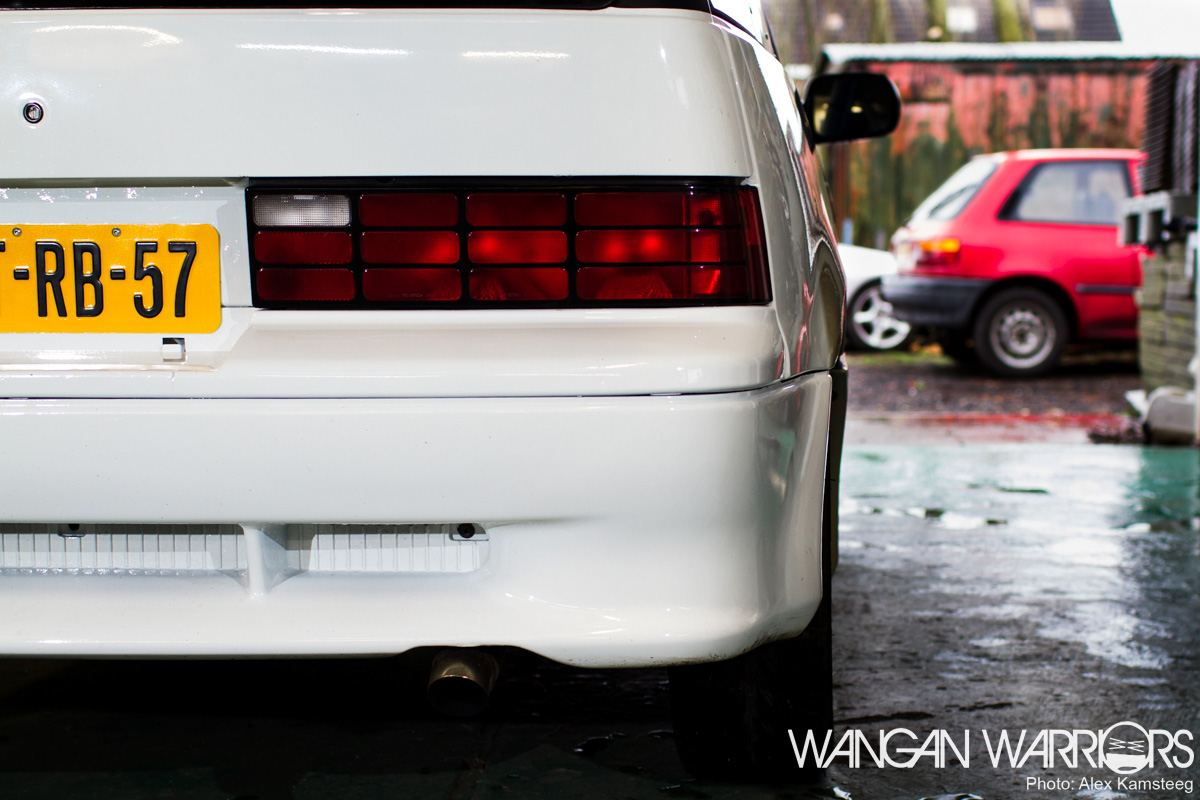 On the outside the stock tail lights where replaced by a set of USDM lights with red indicators. This actually involves a bit more work than just removing the old lights and fitting the new ones, and as a bonus the location for the license plate is now too small for European-sized license plates. Not that it bothered Niels, he just replaced them with a set of smaller ones. 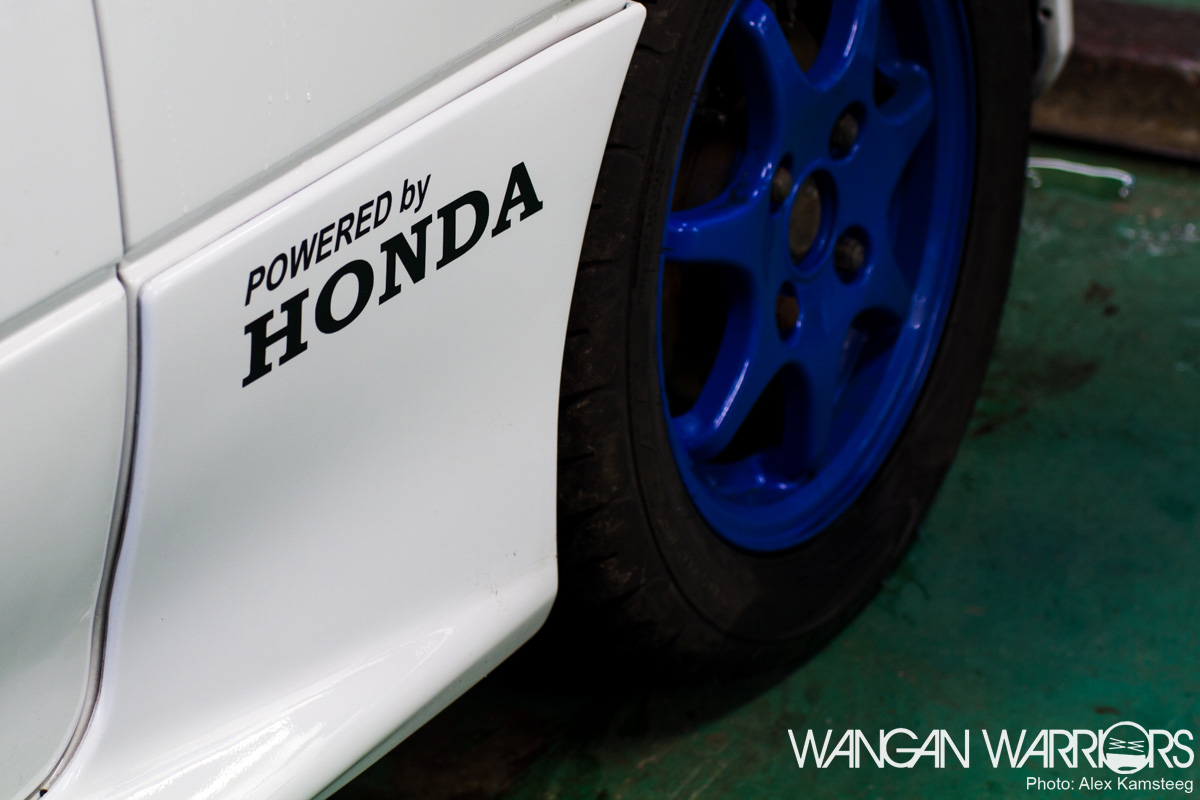 To complement the GTI front and rear bumper he finished the bodykit by adding the GTI side skirts too. After all the rust removal and other fabrication work by Dennis and Niels, they painted the car white in their own makeshift spray booth. And just to keep things simple and elegant the car is almost devoid of decals and stickers. Besides the obvious “Powered by Honda” ones on the side skirts, of course. 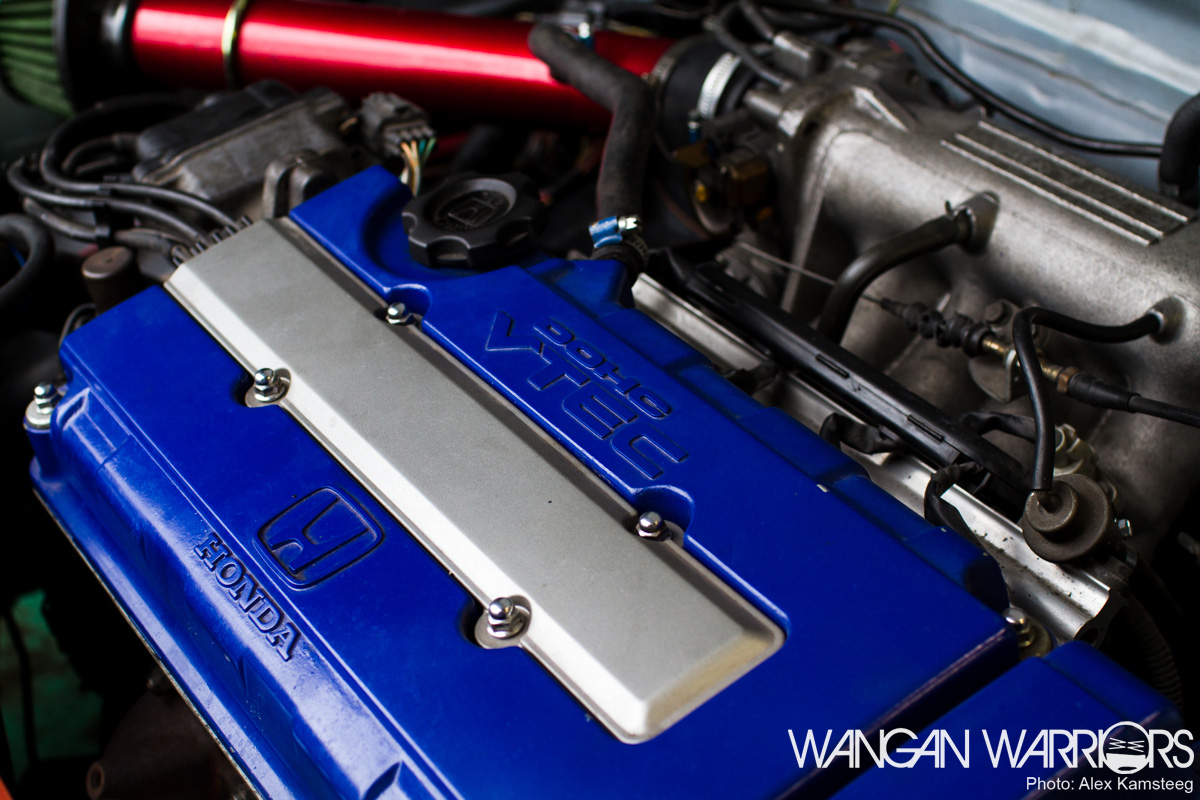 Wait, what? A Suzuki Swift, powered by Honda? Yes, that tiny little original engine was replaced by a B16 from a Honda Civic Del Sol, along with the gearbox and drive shafts. The engine remains largely stock, but with 160 HP in a car that weighs barely more than 800 kilograms this there’s nothing to be ashamed off. Niels told me that he has yet to try the top speed, but the needle on the speedometer easily goes past the 200 km/h mark. 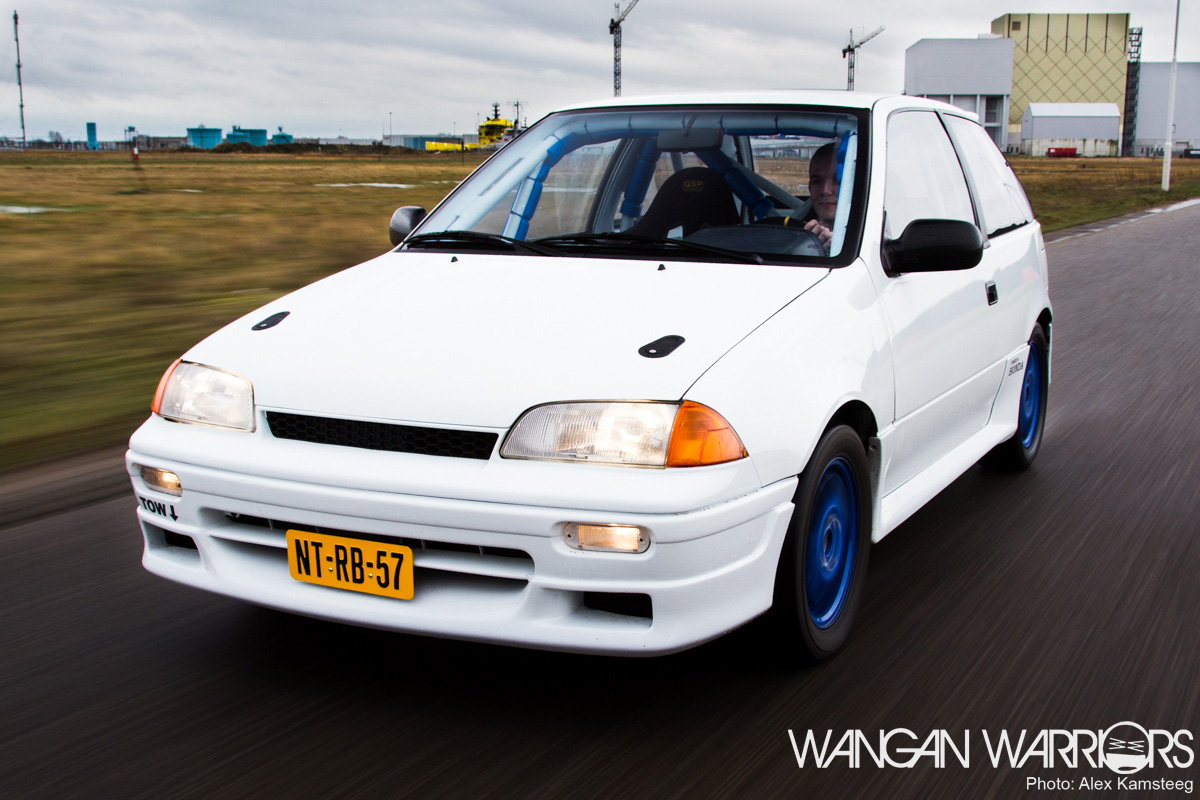 Because the car hasn’t been on the track yet Niels kept things simple in the suspension department. Up front the car has a set of custom made coilovers, with a set of Honda brakes. On the rear Niels is using Koni shocks with simple lowering springs and a Whiteline ARB. The stock rear brakes were replaced by GTI parts and the car is rolling on blue 14 inch GTI wheels. 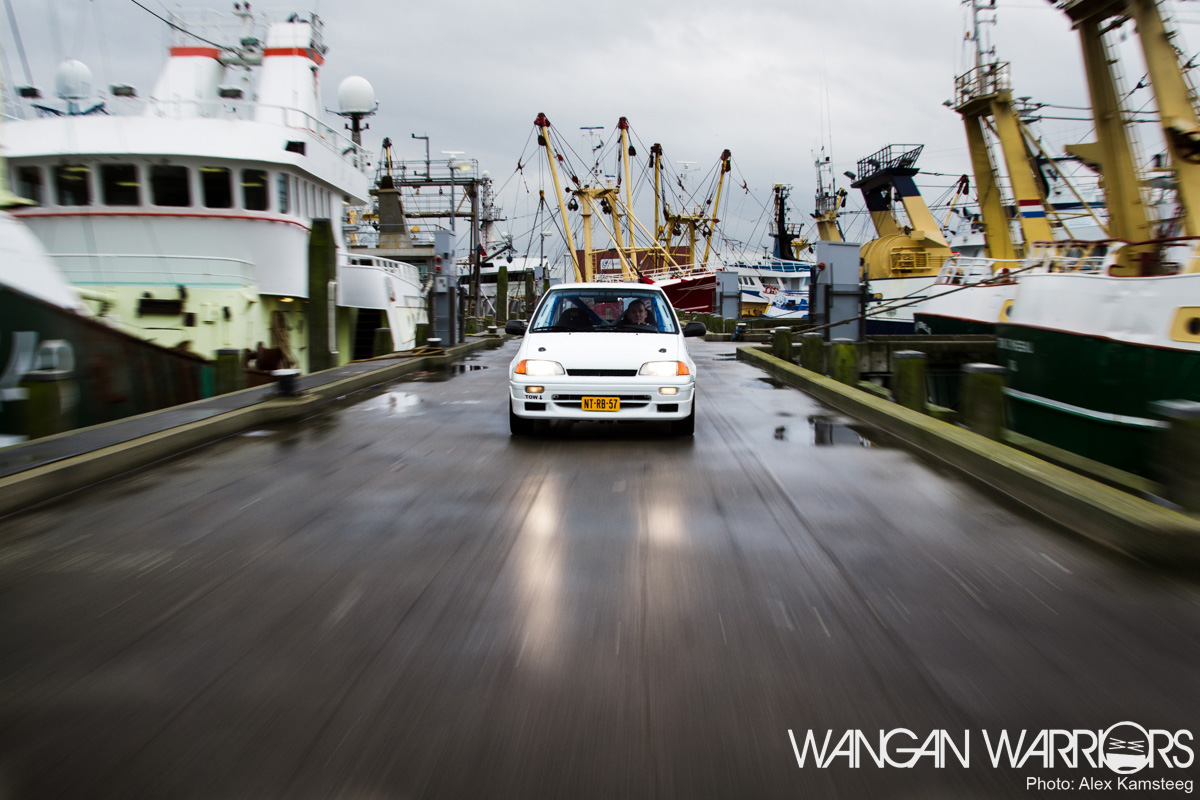 And best of all? The car is completely road legal. Even the engine swap passed the stringent Dutch tests, which means Niels can fully enjoy his car on the road too. He can drive the car to the track, attend a track day and then drive it back home. Or he could just drive it to work, of course. 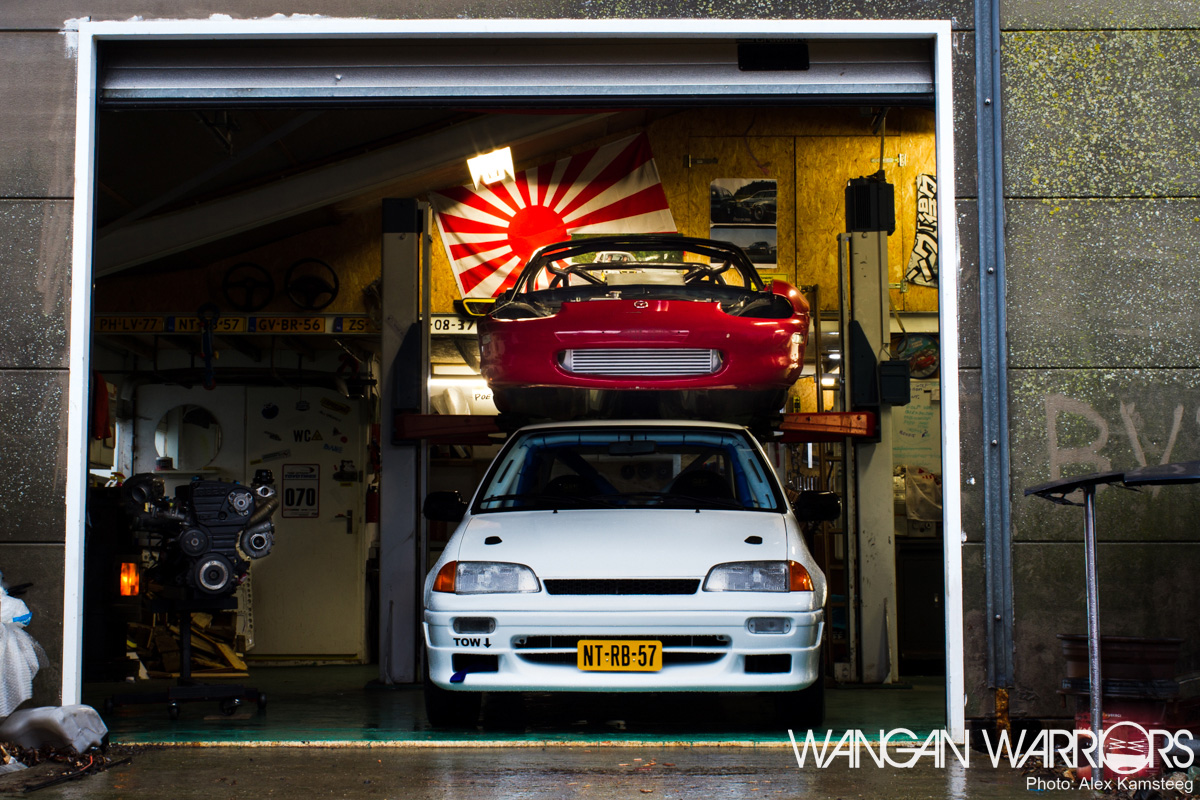 To me this car is a perfect example what someone with a goal and an attention to detail can build in a shed. With a ton of hard work Niels and Dennis turned this car from just a blue Swift to an eye-catching race car. A perfect base to enjoy and improve and I think I’ll spot this car on the track or the Ring somewhere in the near future. It will suddenly appear in the corner of my eye, with a widely smiling driver behind the wheel. And then, almost as soon as I noticed it, it will race past me. A flash of white and blue accompanied by the roar of that Honda VTEC engine. Wouldn’t that be perfect?