Buckle up boys and girls, grab your helmets and brace yourselves because we’re about to show you an event the Wangan Warriors way. I’m pumped with excitement to present another event through my viewfinder and this time it’s not a regular show that we find in the Lowlands. We’re taking you to a place where people wear viking helmets, a place where people burn more rubber in one track session than the entire Middle East in one year and a place where army tanks are decor of a car event. No, we’re not in Iraq, this is Gatebil! 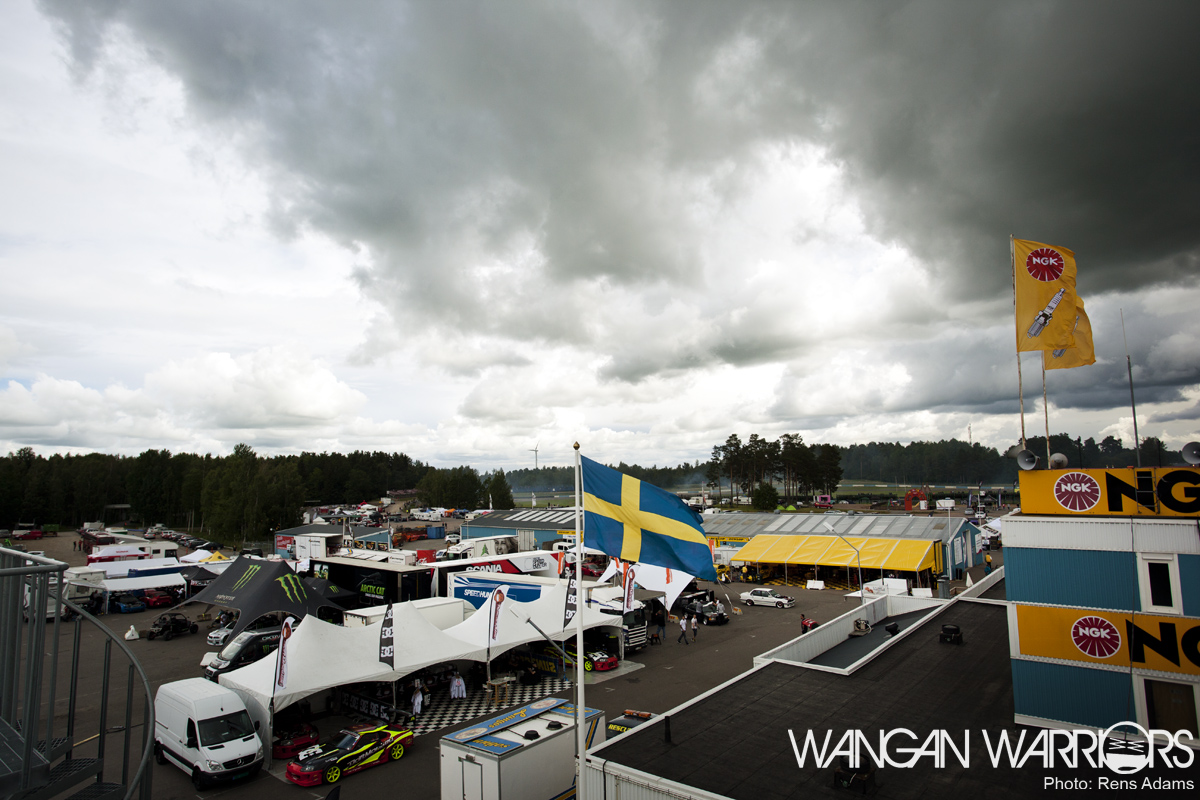 Don’t we all have a bucketlist? I believe we all have certain list of things we really need to do before we kick the bucket. I have a couple of lists and one particular list when it comes to photography and the car scene. One thing that has been somewhere at the very top of that list is visit one of the Gatebil events. 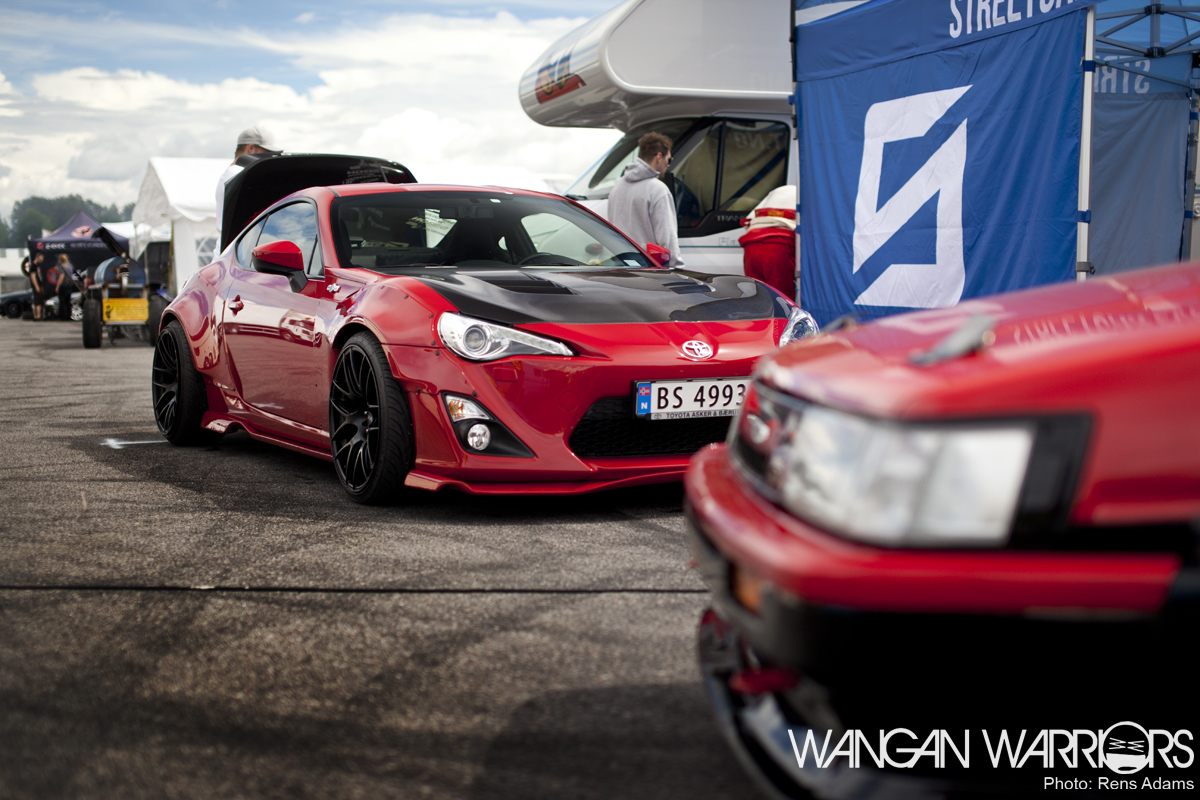 I’ve been talking to some Swedish friends for quite some time and they kept urging me te visit scandinavia because it would absolutely blow my mind in many ways. Of course I knew they were right and finally got going with planning out the trip. As soon has the hotel and flights were booked, it was finally a fact that we were going to visit Gatebil at Mantorp Park in Sweden. 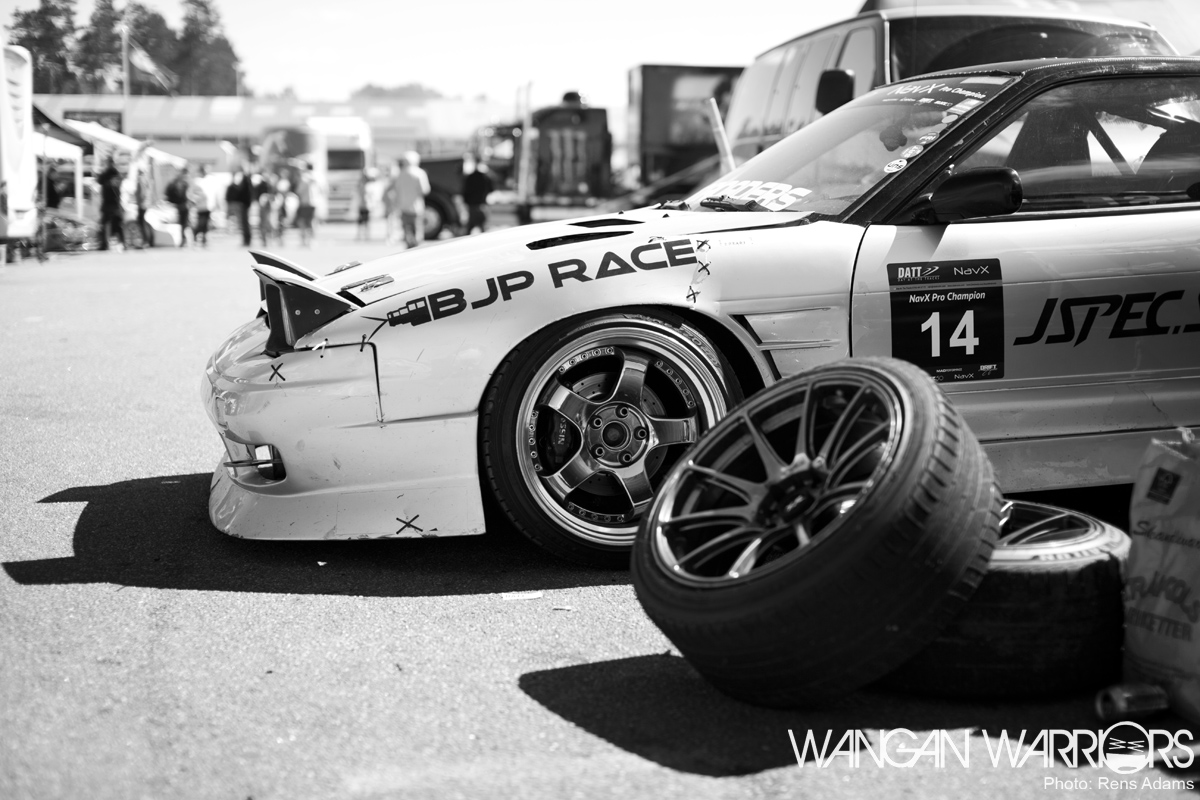 A lot of people have said this before and I can only stress the fact that Gatebil is not your avarage car event. It’s not a car show, it’s not a trackday nor a driftevent, I don’t think there is a category to place this event under. It’s just Gatebil. It’s an event with litterally all the factors a real motorsports event should have without the real focus on one discipline the entire time. 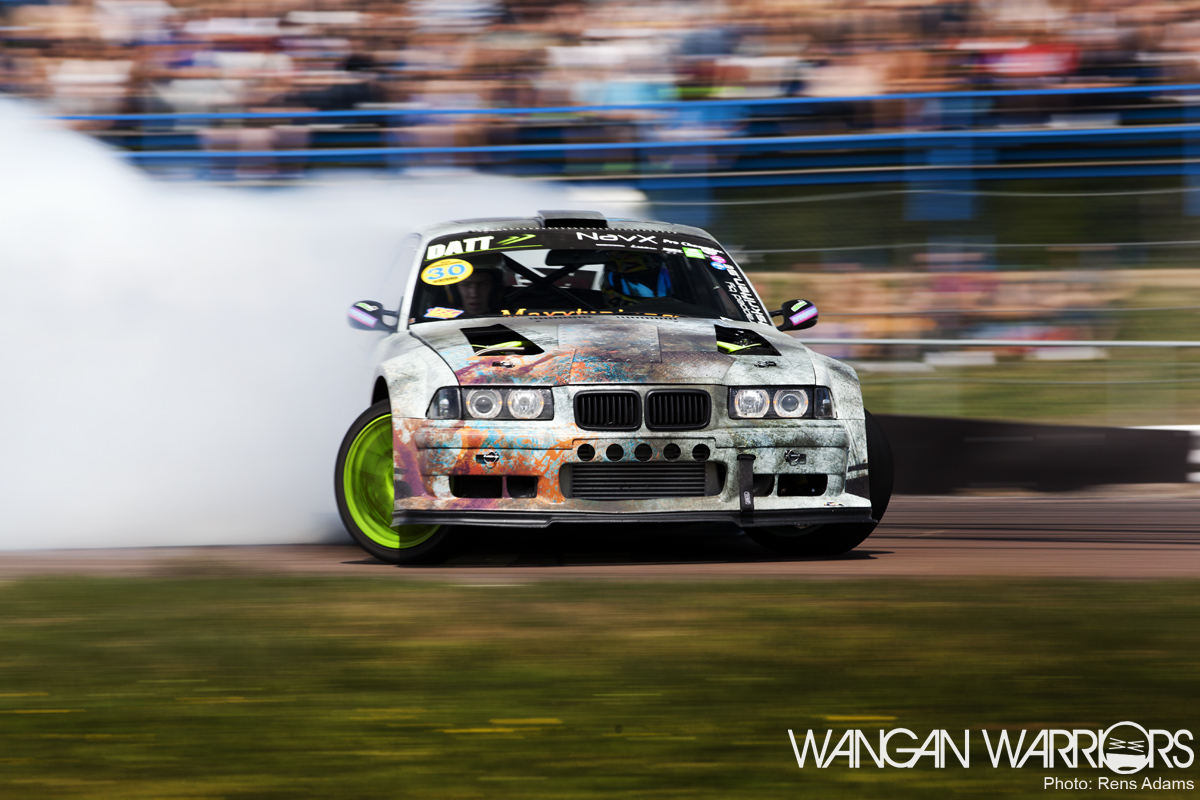 When Maurice and myself arrived at the event our first order of business was to get our media vests and sort things out on that part. Being there for the first time always makes me a little nervous because you never know if everything went well with your accreditation. But everything was very well organised and we were briefed on the safety regulation and that actually all came down to one thing. Look out for yourself and eachother, don’t get killed because it’s a warzone out there. 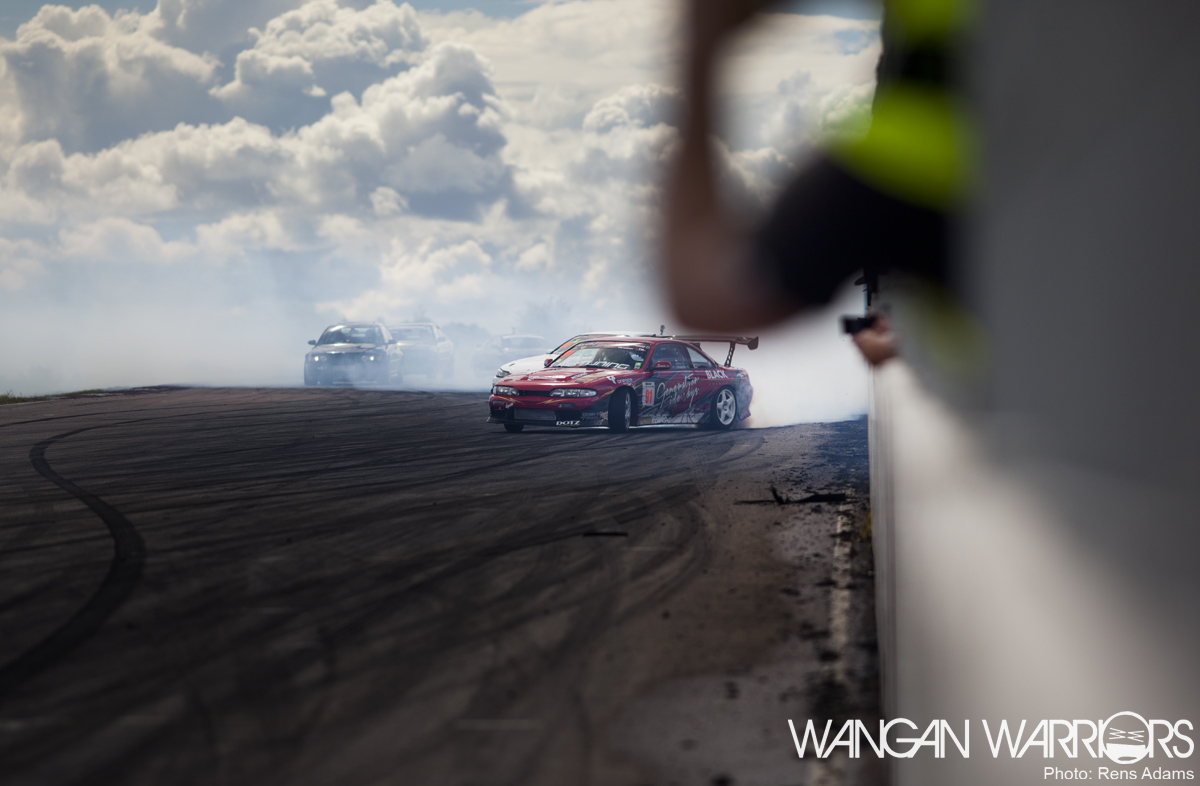 Purely that fact describes the insanity level of the action on track. Wether it’s a time attack session, driftdemo or an open track session, it’s chaos all over and I’ll assure you, chaos in the good and oganised way. That might sound weird to you, well just visit Gatebil and you’ll see for yourself. 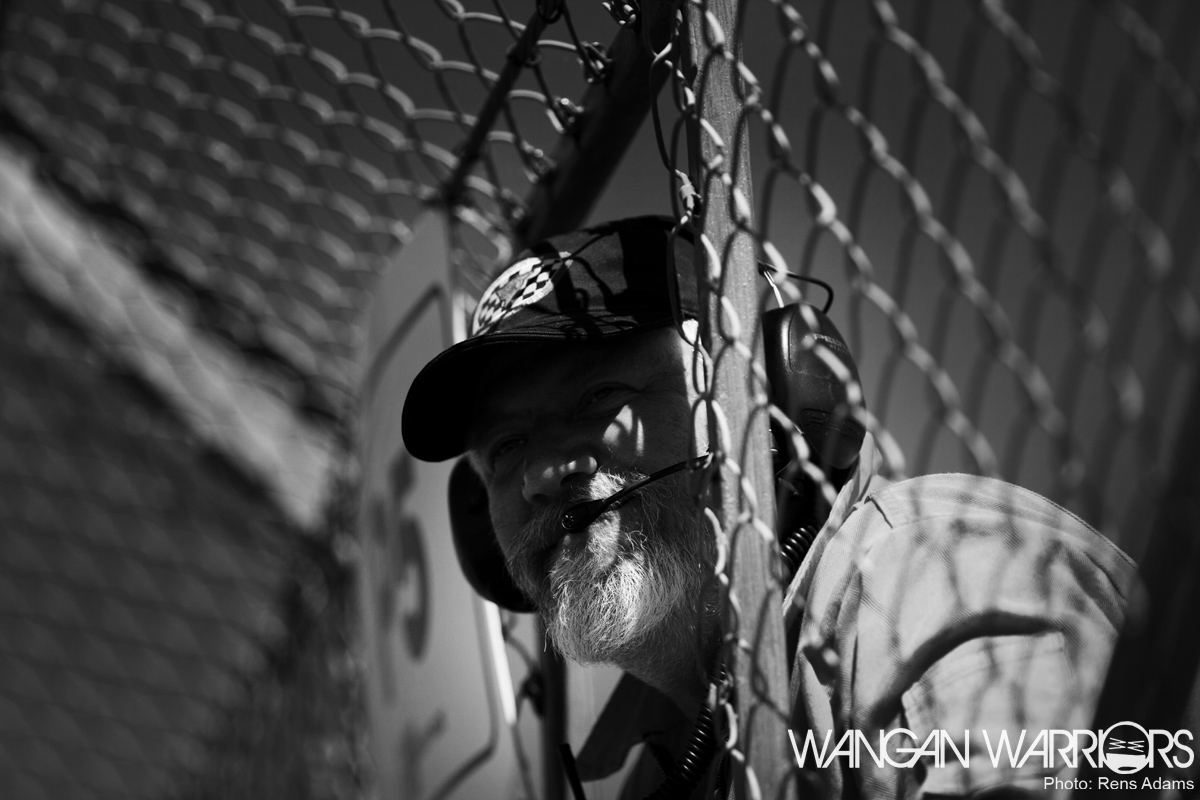 You are allowed to cross the track at all times and almost at all areas of the circuit. I know, I was surprised myself. The organisation of Gatebil has great trust in people visiting the event and that they look after eachother and keep things in order and civilised. As a photographer you can’t ask for nicer marshals and personel while shooting. 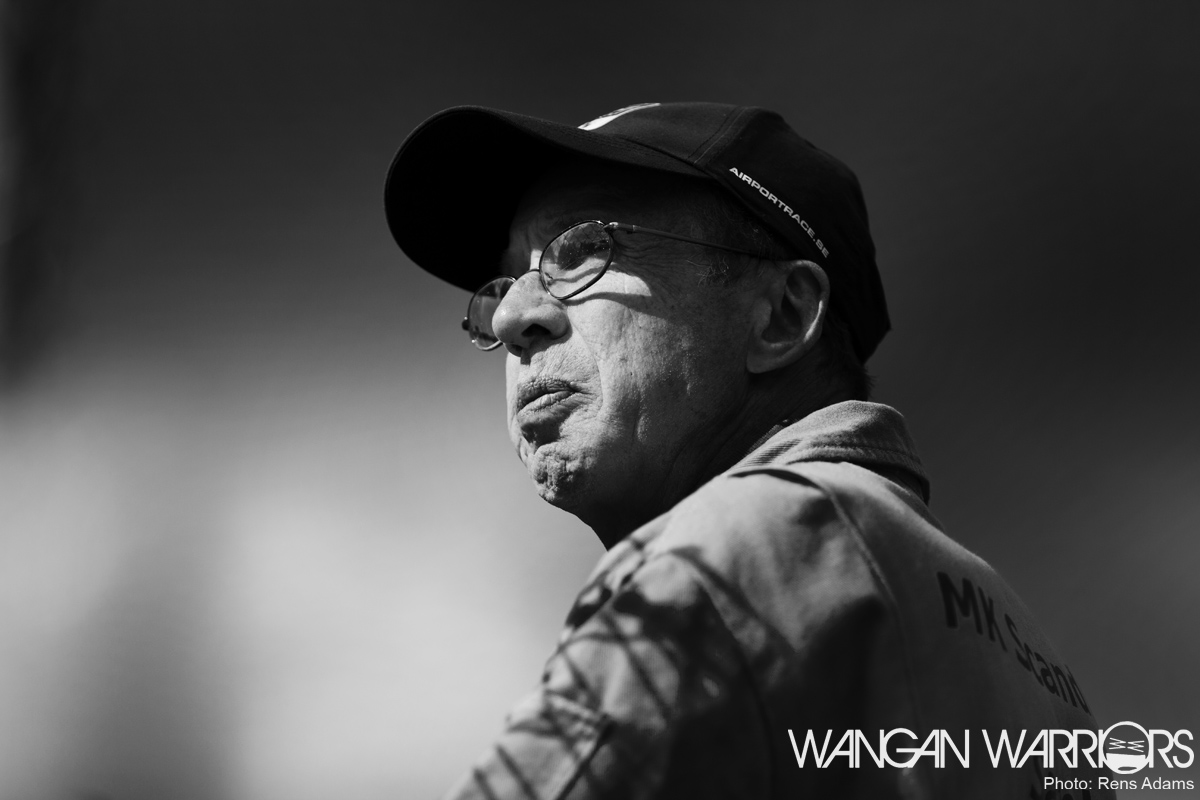 Believe me, they do look after you and I was even welcomed by the gentleman above to one of the longest stretching corners of the track. “Welcome to the blue cloud” he said with some sort of Scandinavian accent. I thought he was going to give me hard time for standing where I stood but no, a pat on the shoulder and he wished me good luck. I love you Gatebil! 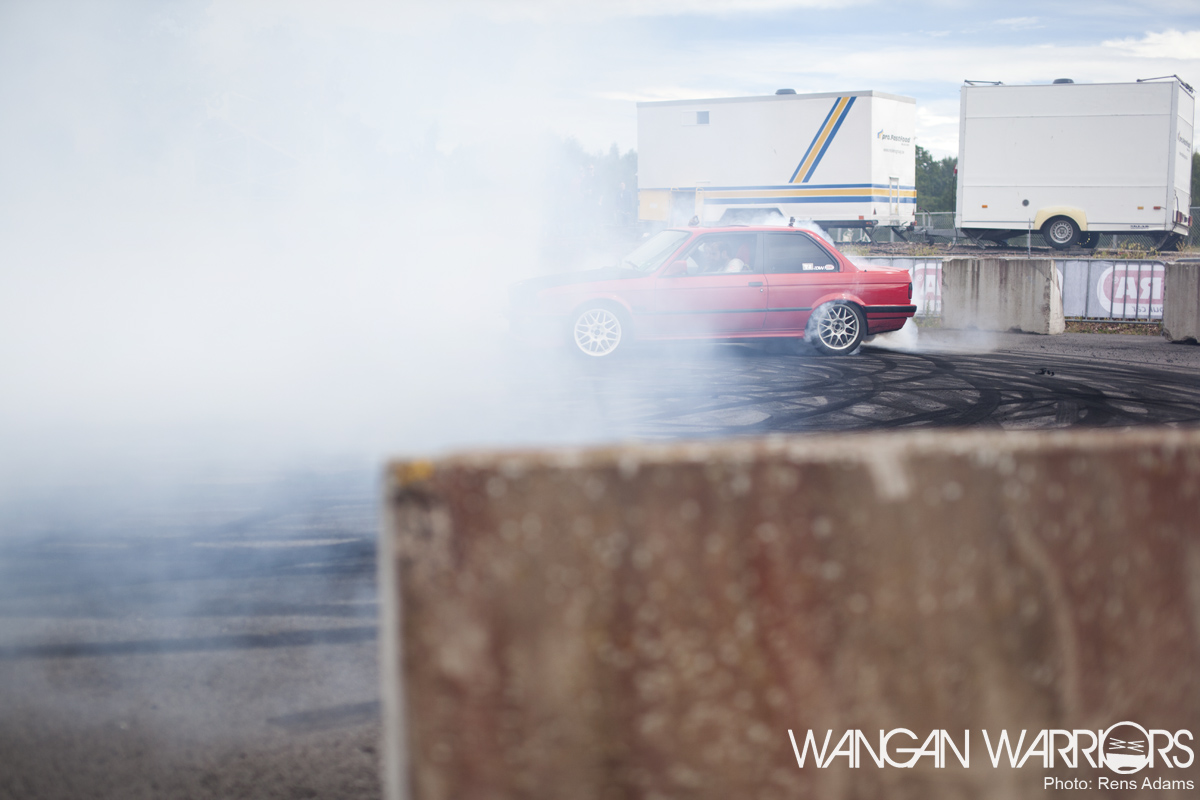 This event was a weekend full of surprises. It was the first time I experienced what a burnout box was. It’s actually real simple, you take a couple of concrete barriers, form a circle with them and allow people to do burnout donuts inside. There is no real purpose to do so, it’s just for fun or to burn so much rubber until the tyres pop. After that you just switch tyres and start all over again. It’s Swedish, same as Ikea but different. 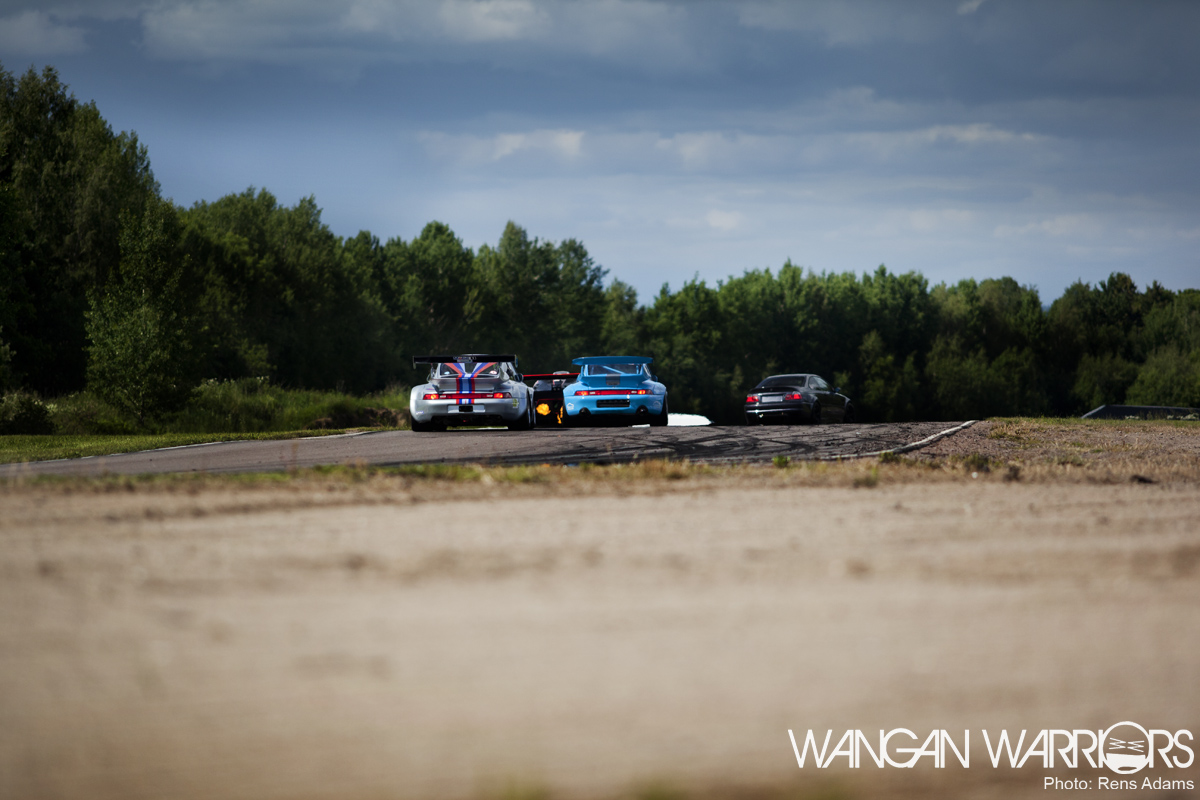 While some visitors might be burning the last bits of tyre in the burnout box, you’d hear the most impressive machines known to men blast through the corners of the Mantorp Park circuit during the Time Attack sessions. These were only a few of the amazing builds battling for their fastest lap. Again, not every day you see a Stealth B7 grilling up two Porsches. Medium or well done? 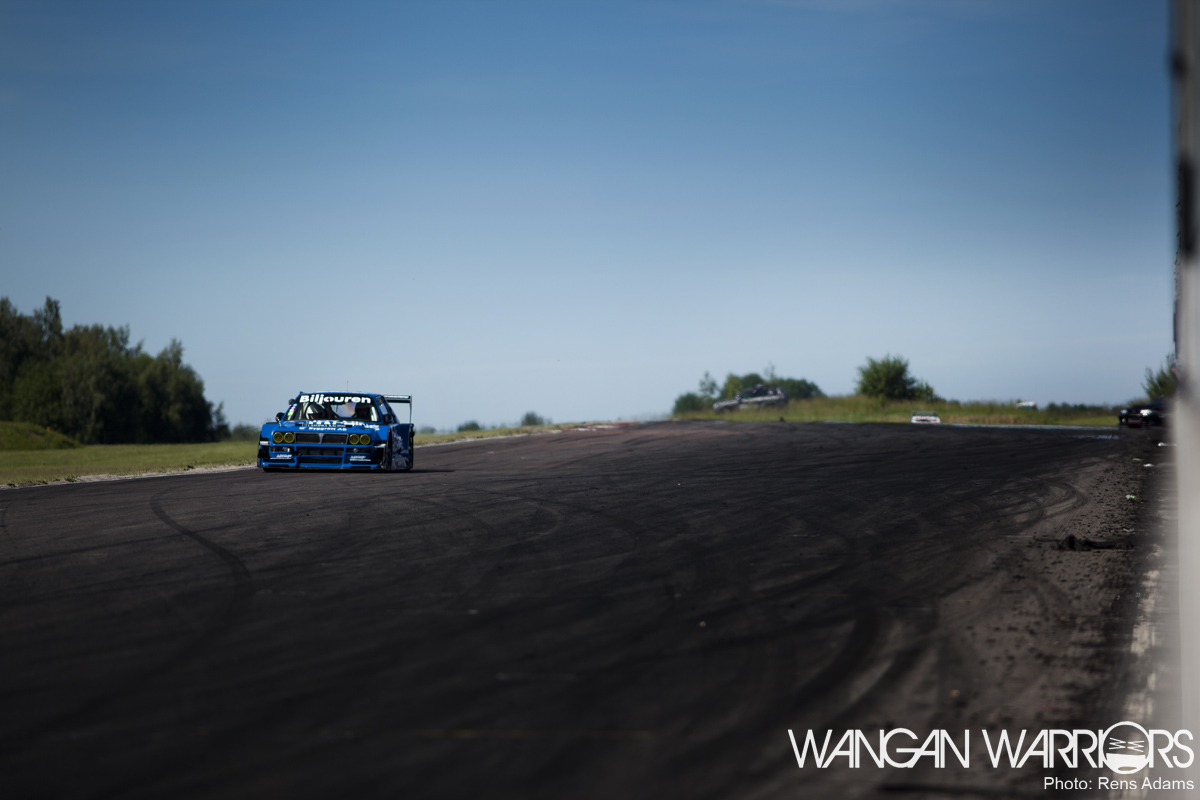 Amazed by the many projects on location, you can’t capture everything and be everywhere. Even though you do want to very badly. I do have to pay some attention to the Famous ‘LaSupra’, a project I’ve been following since last year through the Speedhunter channels. 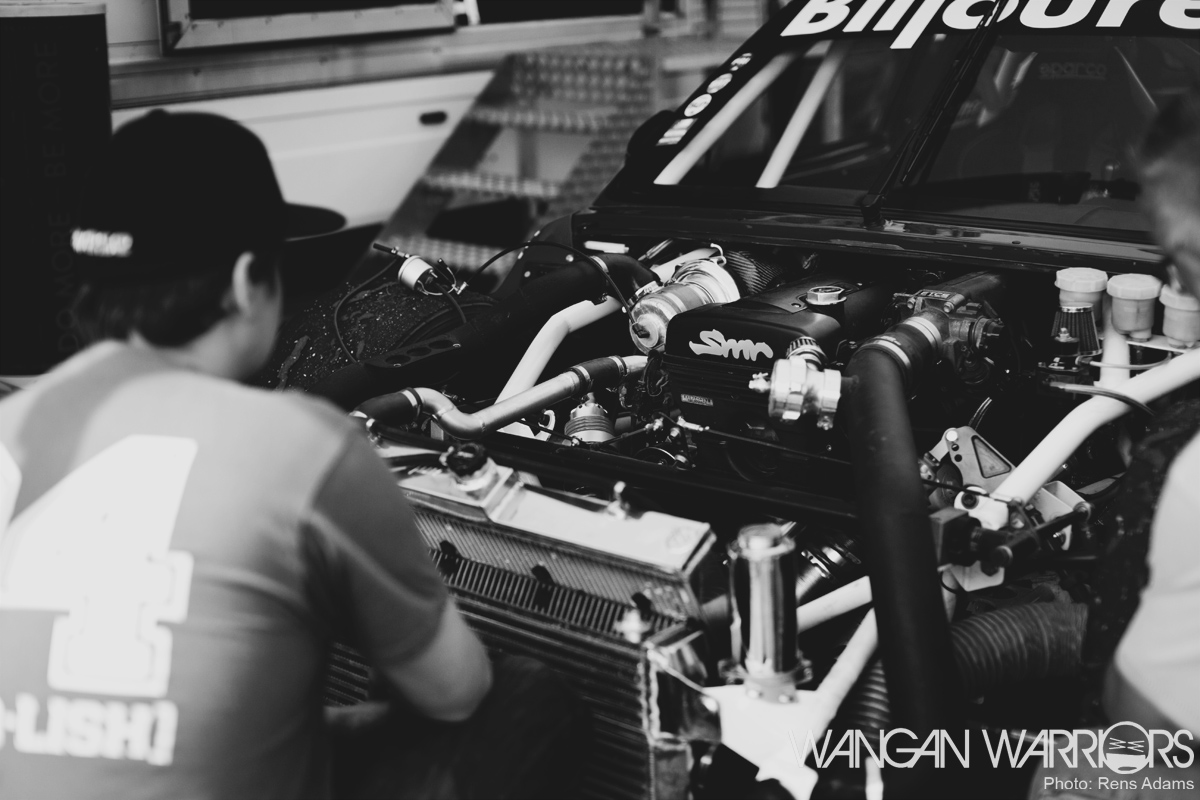 Only weeks before the event the Supra powered Lancia Delta crashed during practice and it looked like it wasn’t going to run any time soon. I was surprised that the owner Peter showed up at the Speedhunters booth at this event. Another famous car captured on my sensitive sensor! 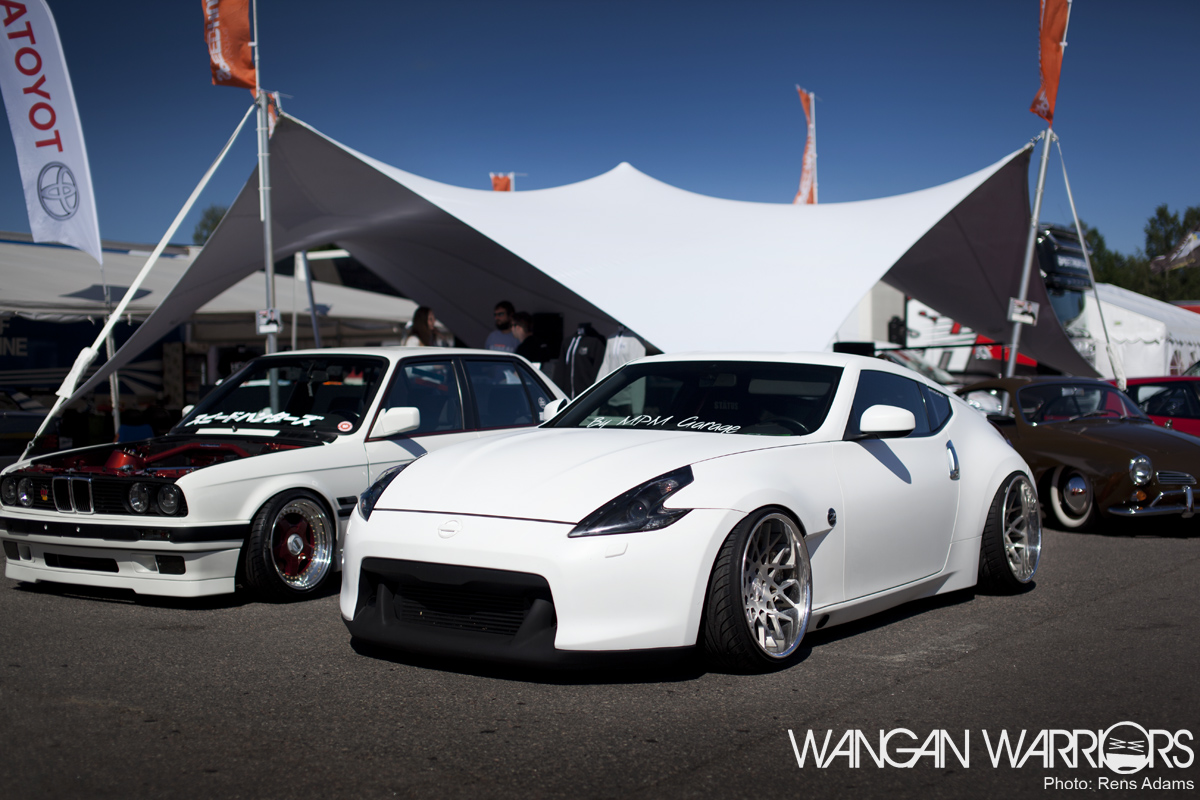 You come across so many cars on the internet and sometimes you really hope to get to see and touch(yes I touched it for a little while) the cars you only see on a computerscreen or mobile device. On the second day of the event I already knew that it would be common to be surprised every time I turned my head. The SH booth was decorated with a nice variation of projects. One of my favourites was this 370Z for sure. 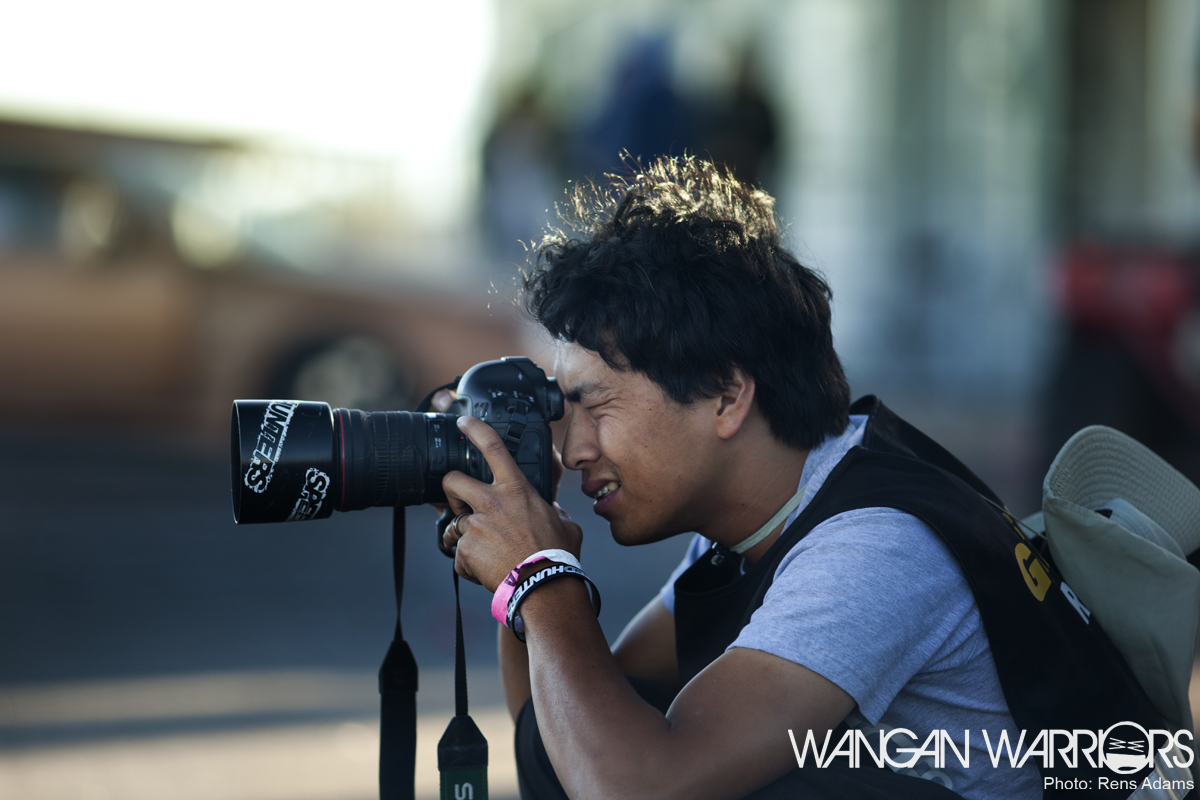 It was great to meet a few other faces of their crew and definitely if you get to meet one of your examples in photography. I don’t think this man needs and introduction. The Chen is an all time jet lagged photographer and I believe a very hard worker. I even know for a fact he used a women’s toilet in Sweden. What happens at Gatebil stays at Gatebil. 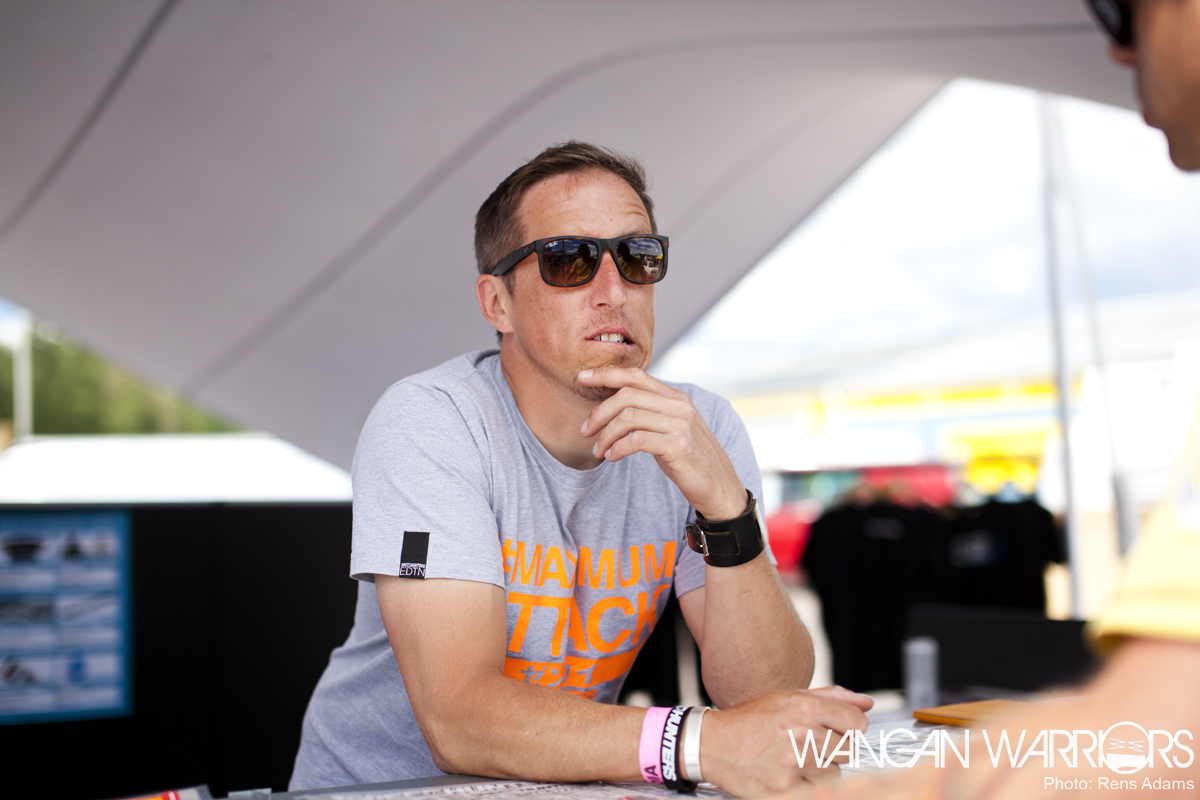 Another interesting man to meet was Bryn Musselwhite. You read and see a lot of other peoples work and think you have a picture of them how they’re in real life as a person. Bryn is a friendly and funny guy and certainly knows what he’s talking about. 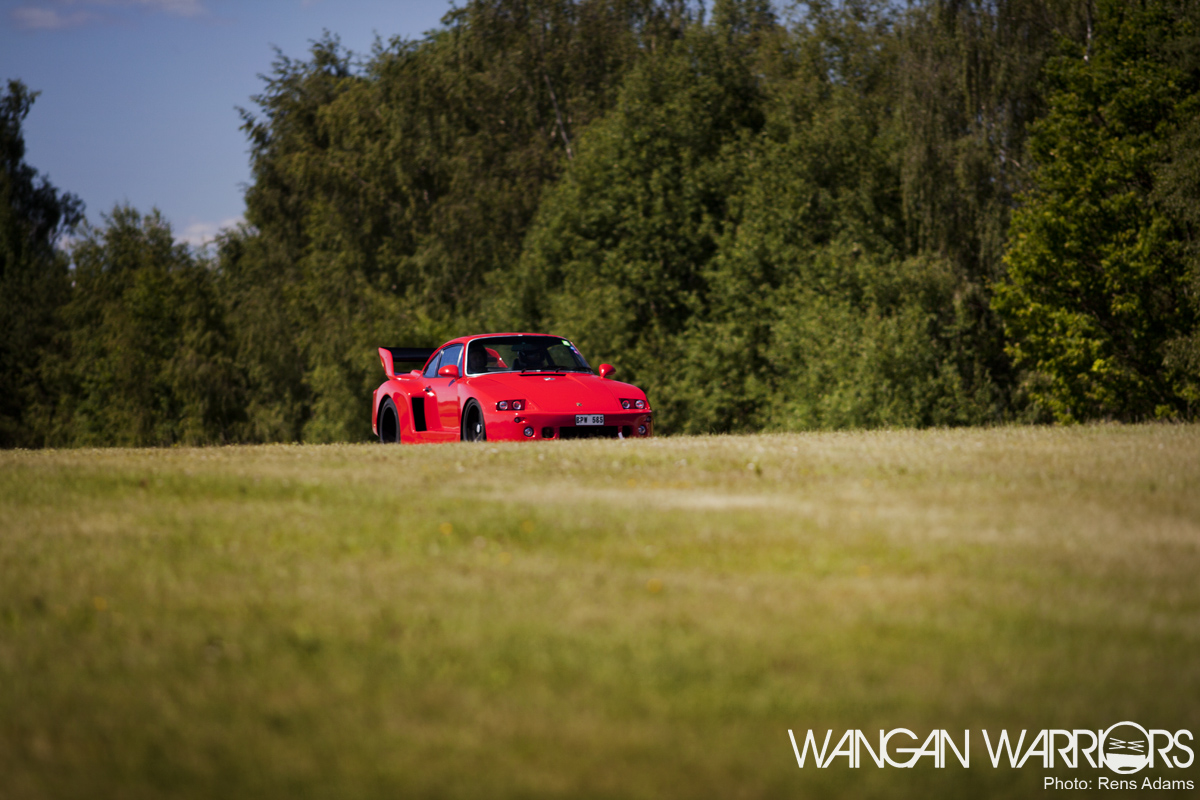 Let’s head back to the track again. I was a little nervous about how I’d find the track photographically and I actually shot the whole weekend with my 50mm and 200mm. I thought I needed a longer lens but after a short session at this part of the track where cars appear over over a hill I thought the 200mm was a perfect focal length. Not so close up but it does show the environment of the venue properly. 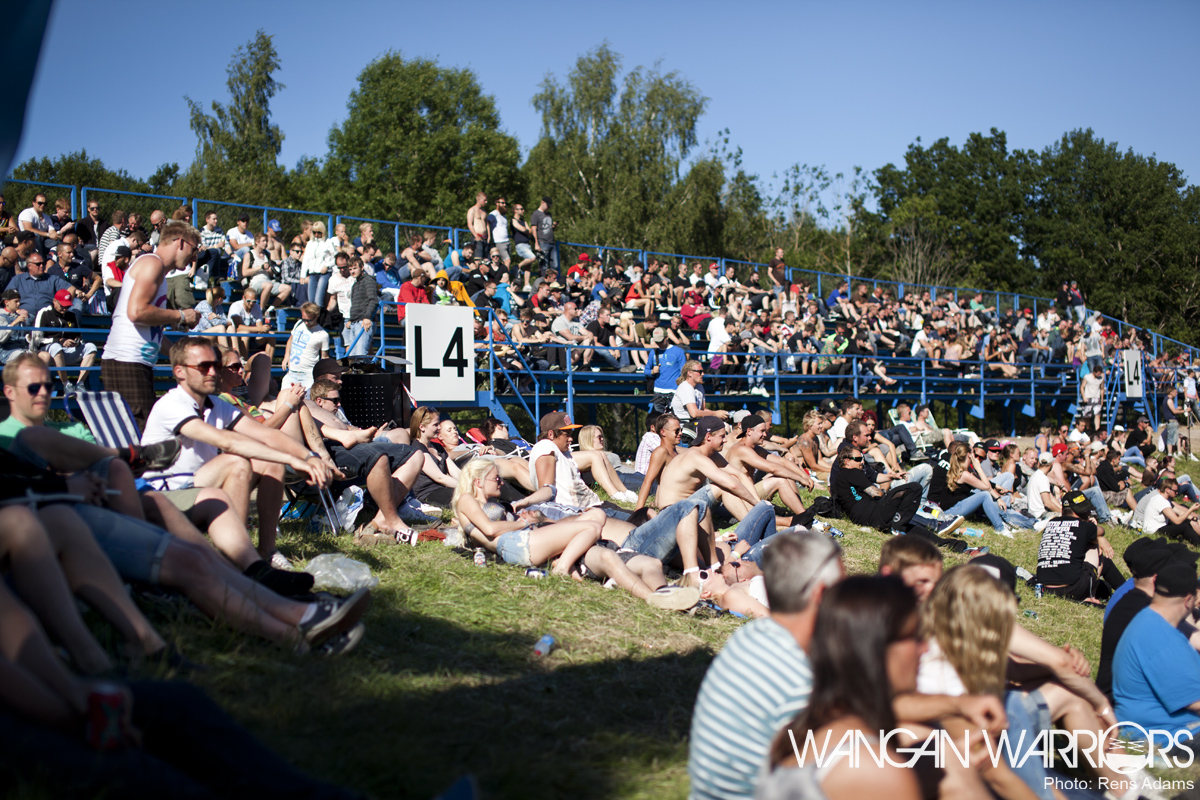 We did find a few moments to be a spectator as well instead of running through the pitlane and trackside all the time. The stands were completely packed with people but there is always place for a couple of photographers. The Swedish crowd is photofriendly and a thumbs up every know and then from a complete stranger was very common. Good folk these Scandinavians. 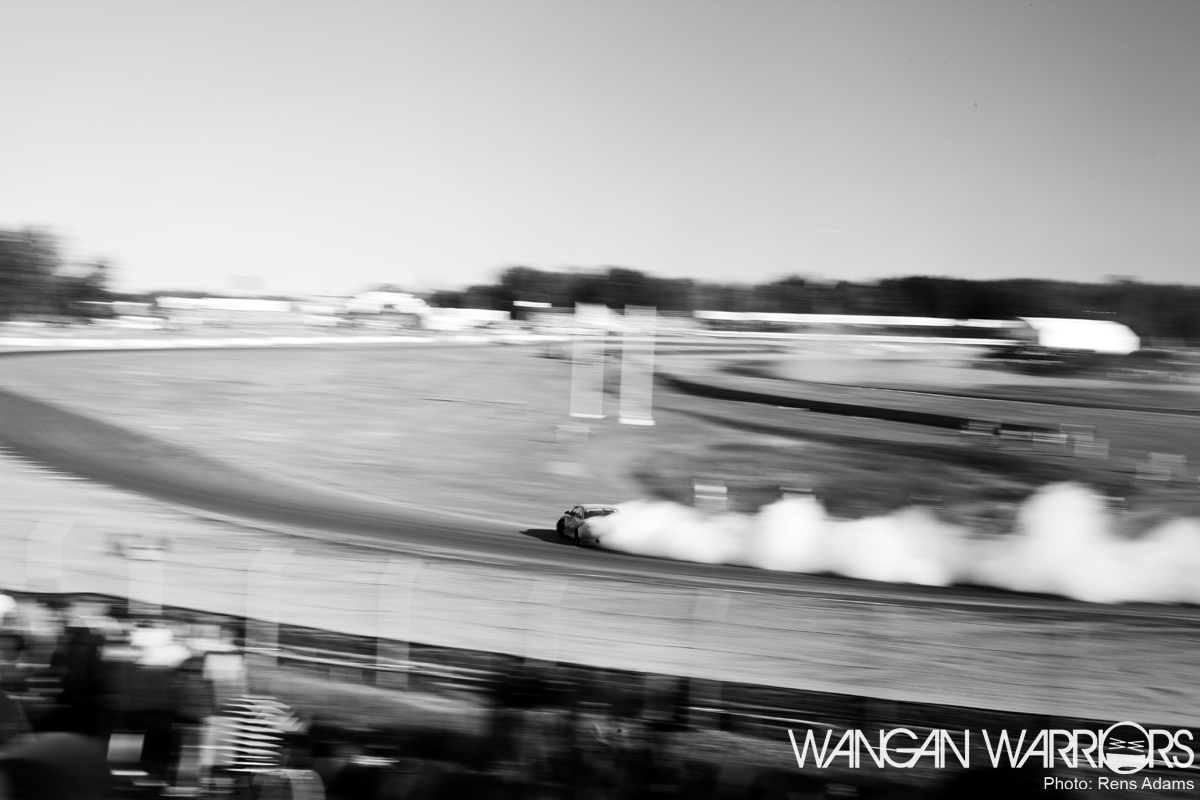 From that point of view it was a cool way to shoot the Powerslide contest which is called ‘Breisladd’. This was actually one of the main attractions where people were looking forward to all day. It’s a competition for drifters who needed to be able to connect a couple of corners as best, fast and smooth as possible. 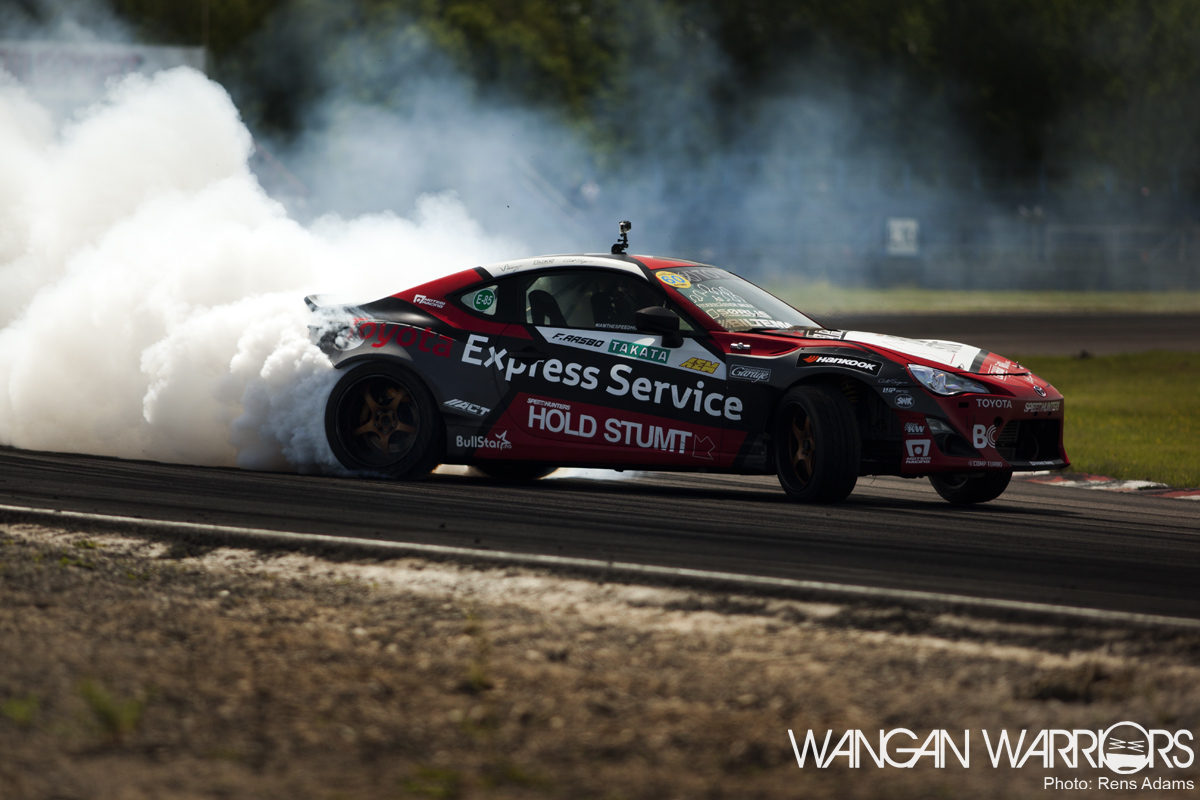 I finnally experienced the Norwegian Hammer and let me tell you first hand, Fredric Aasbo does that name right. The pace that this man has when entering the first turn of the powerslide competition goes beyond your imagination. But really try and imagine fast and you’ll not be close to what it is in real life. 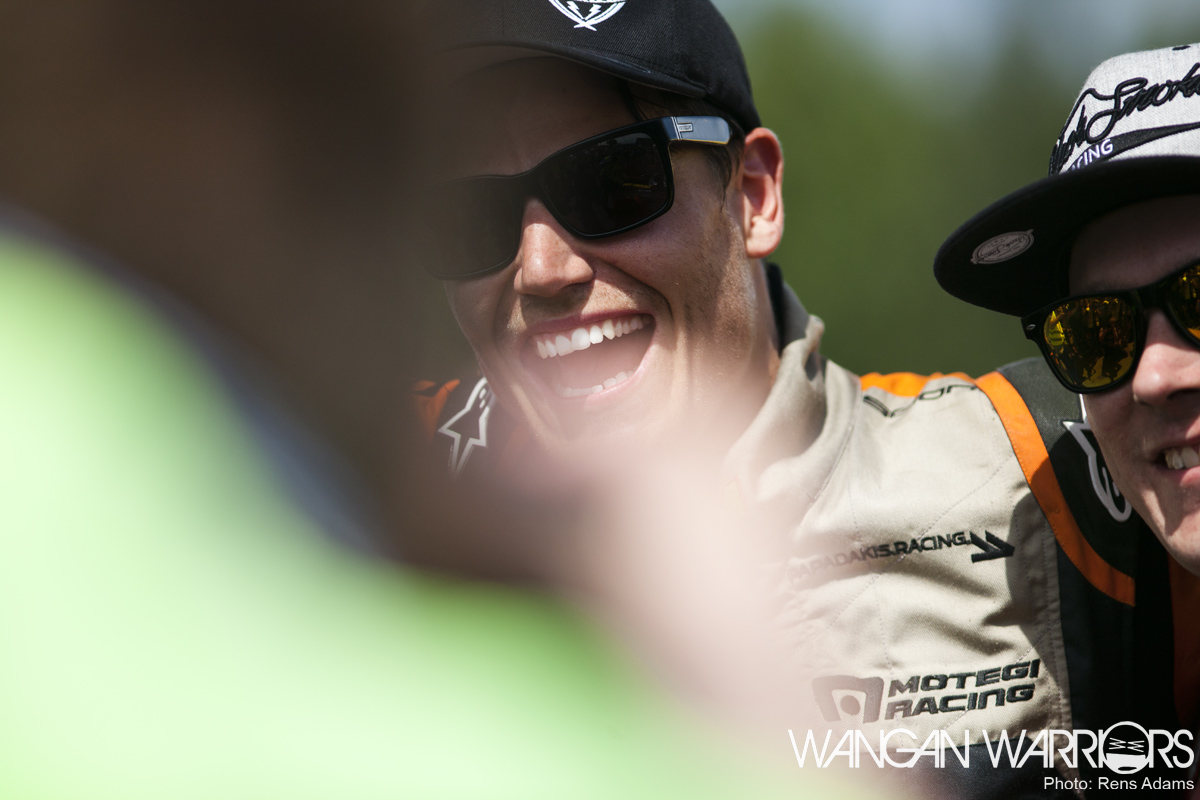 Of course he won the competition by completing the slide flawless and creating a cloud of smoke which would probably is visibly from outer space. He ran into quite some trouble druring his time on track that weekend but I believe he has an amazing team supporting him and working themselves to the bone to get the ’86 back on track as soon as possible every single time. Congratulations Sir! 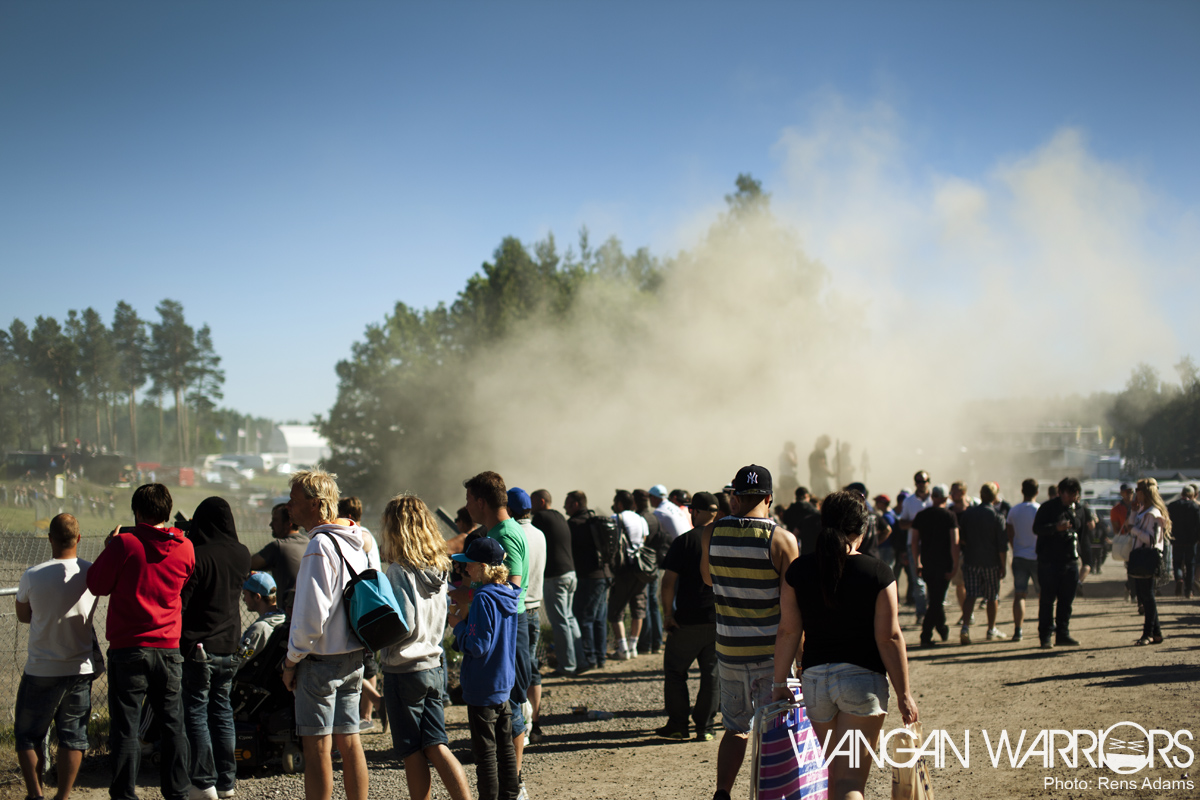 For those who went off track while throwing themselfs through the Mantorp turns, they gave the crowd a nice treat by creating big dustclouds. Those are no fun for your eyes nor for your camera gear. Neither is the rubber grain that gets thrown in your face but it is all worth getting the shots you’ll probably will have to wait for another year. Drifting doesn’t get that mad down here in Holland compared to how it does over there. 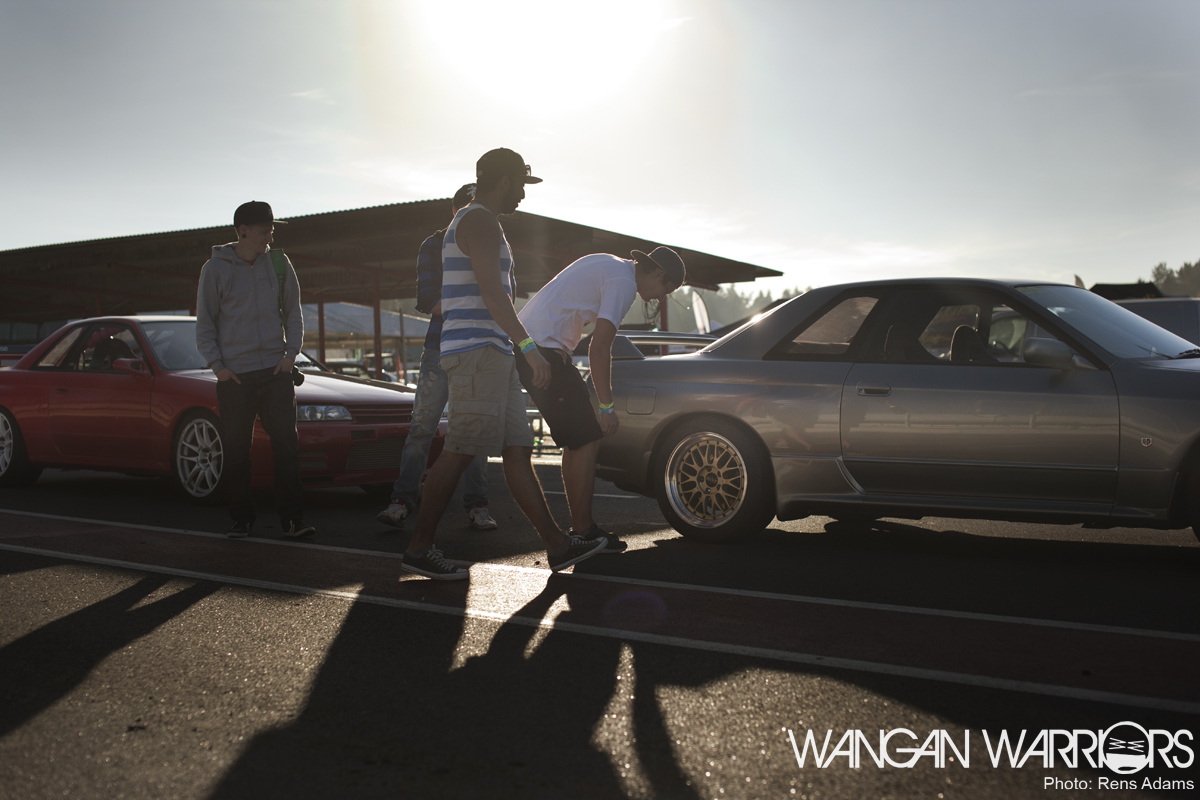 As soon as the evening fell and all circuit activities were over, photographers were allowed to do photoshoots on track. These guys were preparing for a photoshoot for Downforce. If I knew that was possible I would have had a couple of cars which I wanted to shoot for a decent feature shoot but unfortunately we found out a little late. 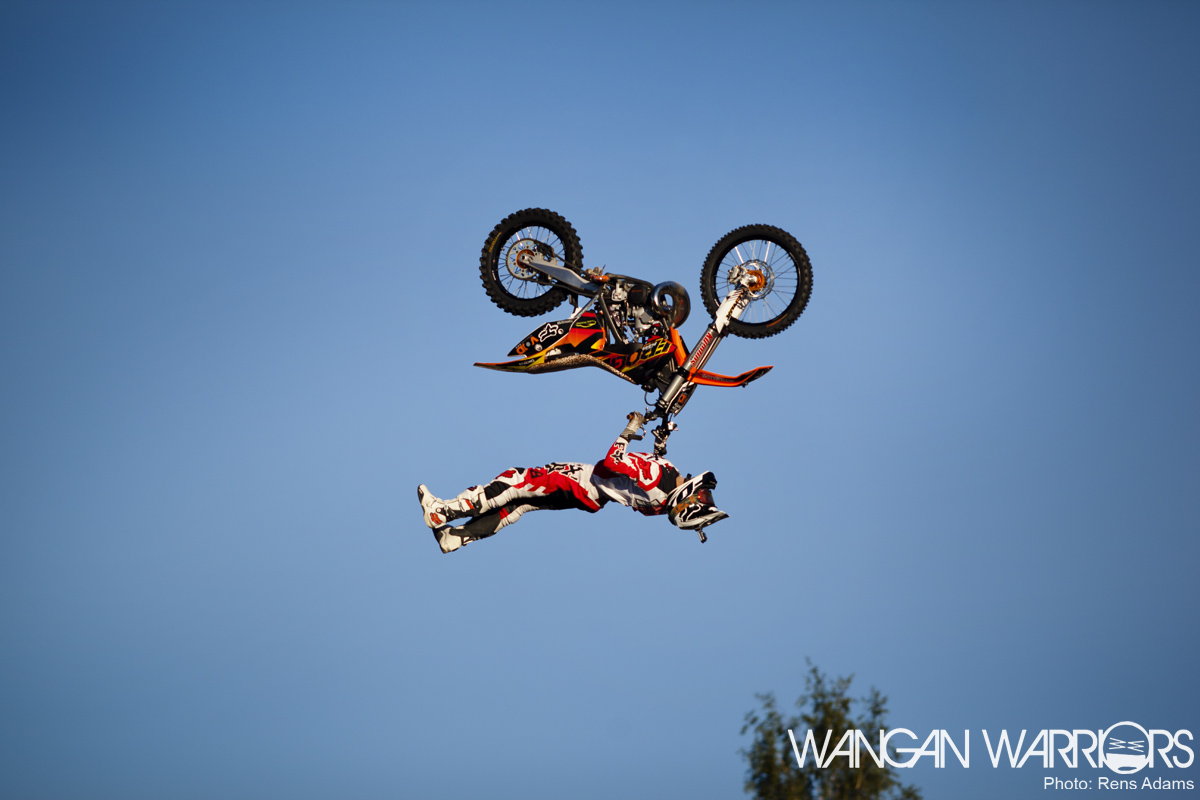 There were also a couple of mindblowing demos of by the drifteams and some sick motorcross stunts with guys doing backflips without hands. You know that’s very dangerous right? I’ve always watched the X-Games and stuff but I never seen a snowmobile been modified to ride on tarmac as well and jump over a couple of ramps. Gatebil offers that so don’t you worry you’ll have your action fix 24 hours a day. 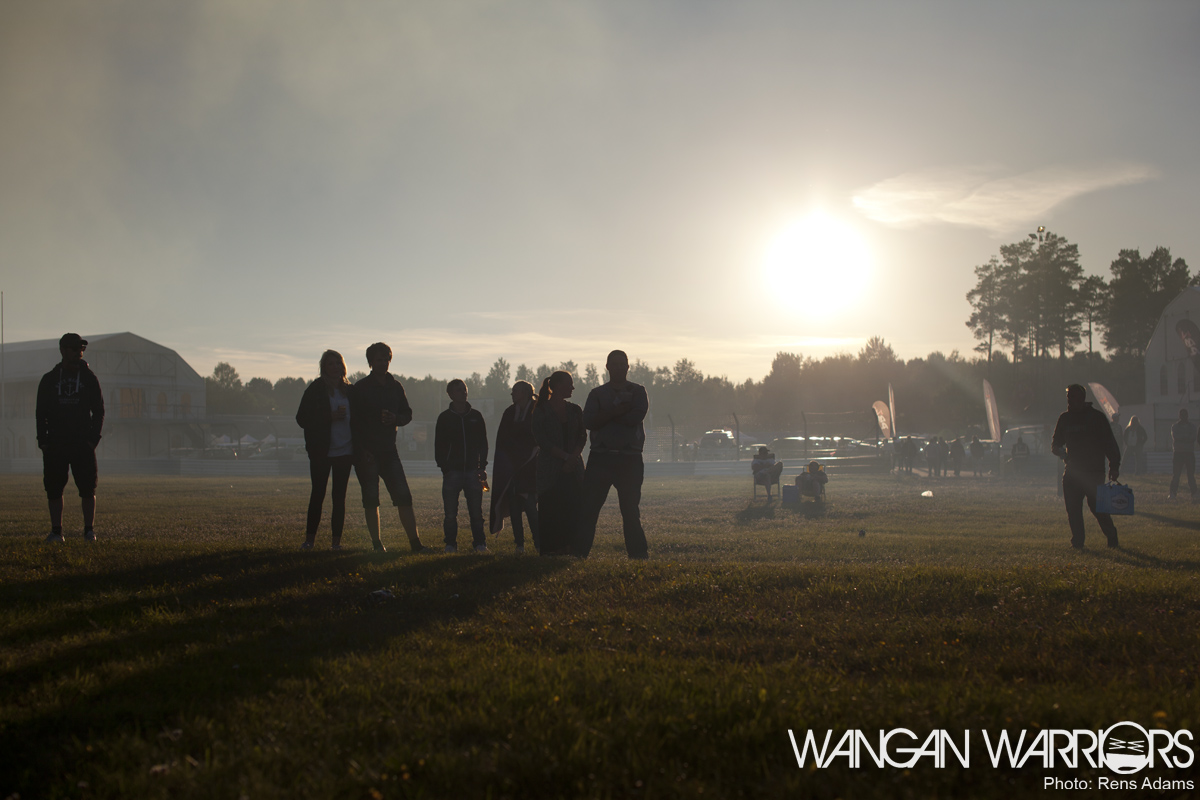 When the sun started to set it was time for all the drivers and teams to pack up their stuff. On the opposite side of the track was a big campsite for visitors and at night it was transformed into a festival area for people to party. Monster Engergy was the main host of the night program and they had some nice entertainment in store for the party goers. 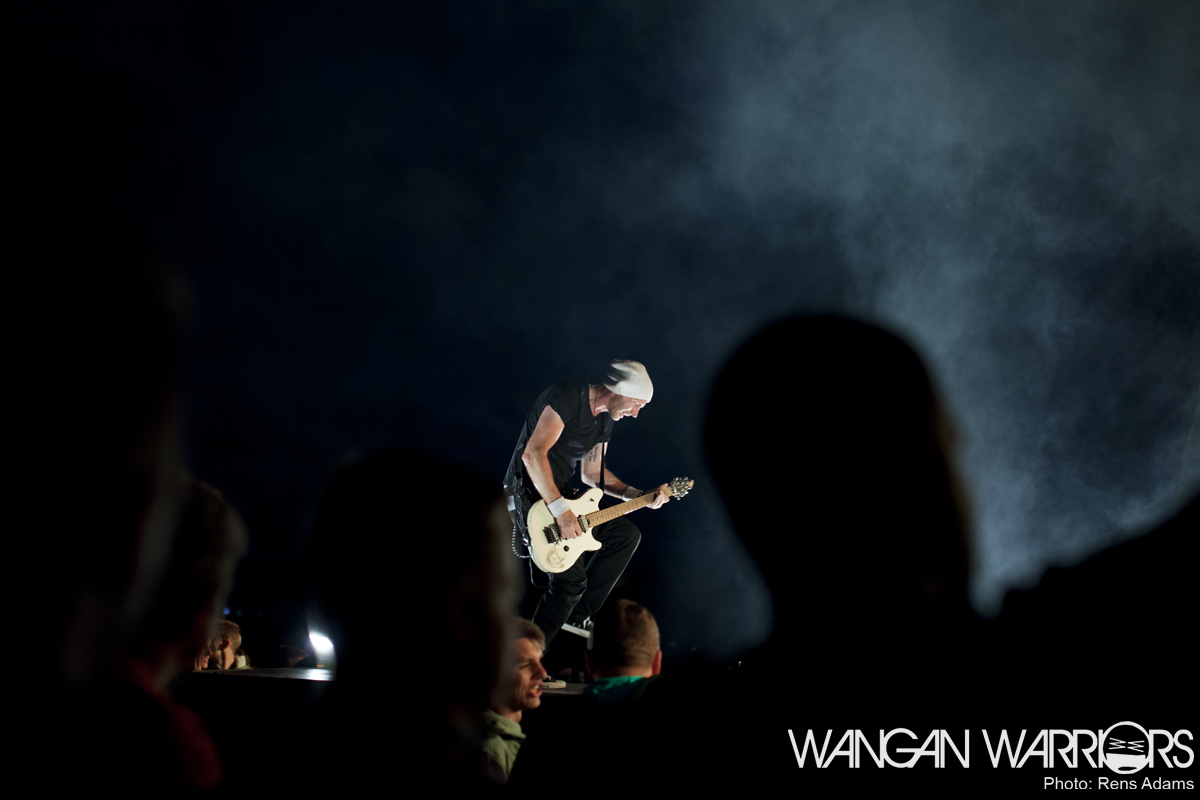 Some awesome music was played by some Swedish band which I forgot the name from. However they did play properly. After the live concert the stage was cleared for group of dancers who did a nice act involving silicon. 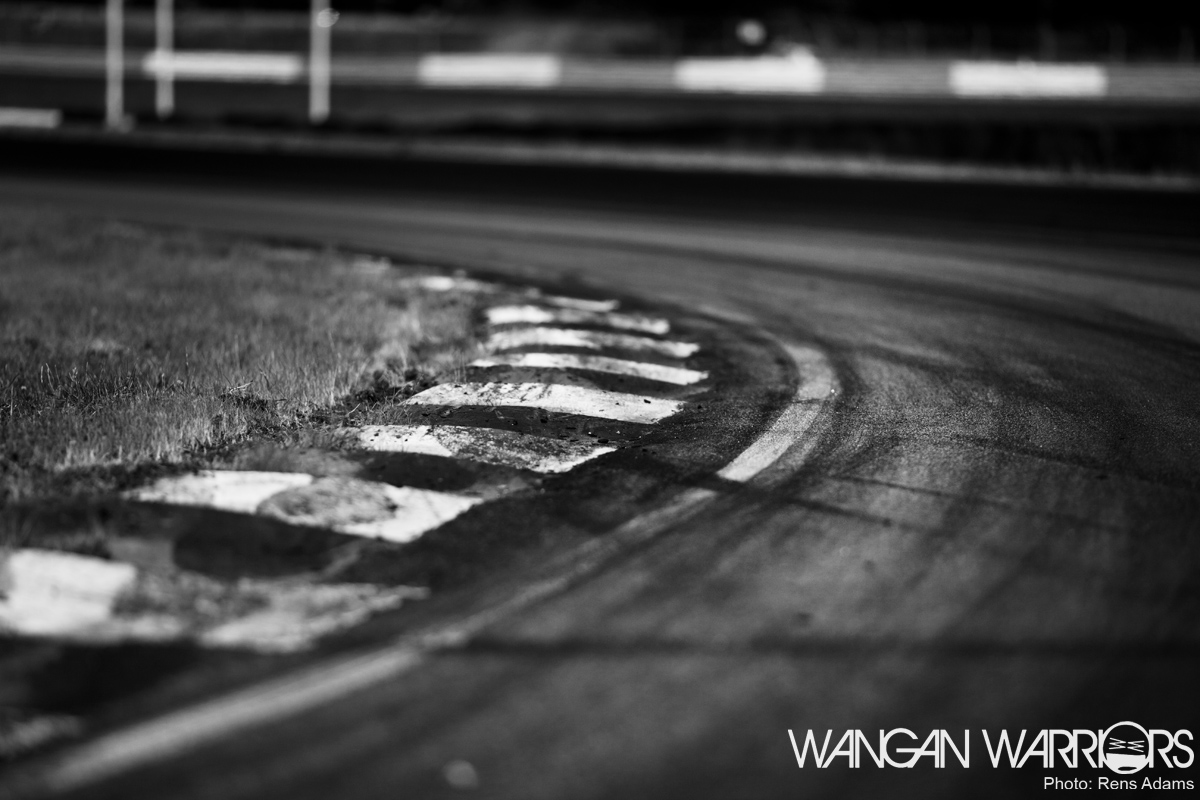 The days after the afterparty were hangover days for many visitors but it was nice to see at the party that nobody tries to get in any trouble which is often the case at festivals. The event was slowly coming to an end and I already started processing in my head of what I’ve actually experienced this weekend. 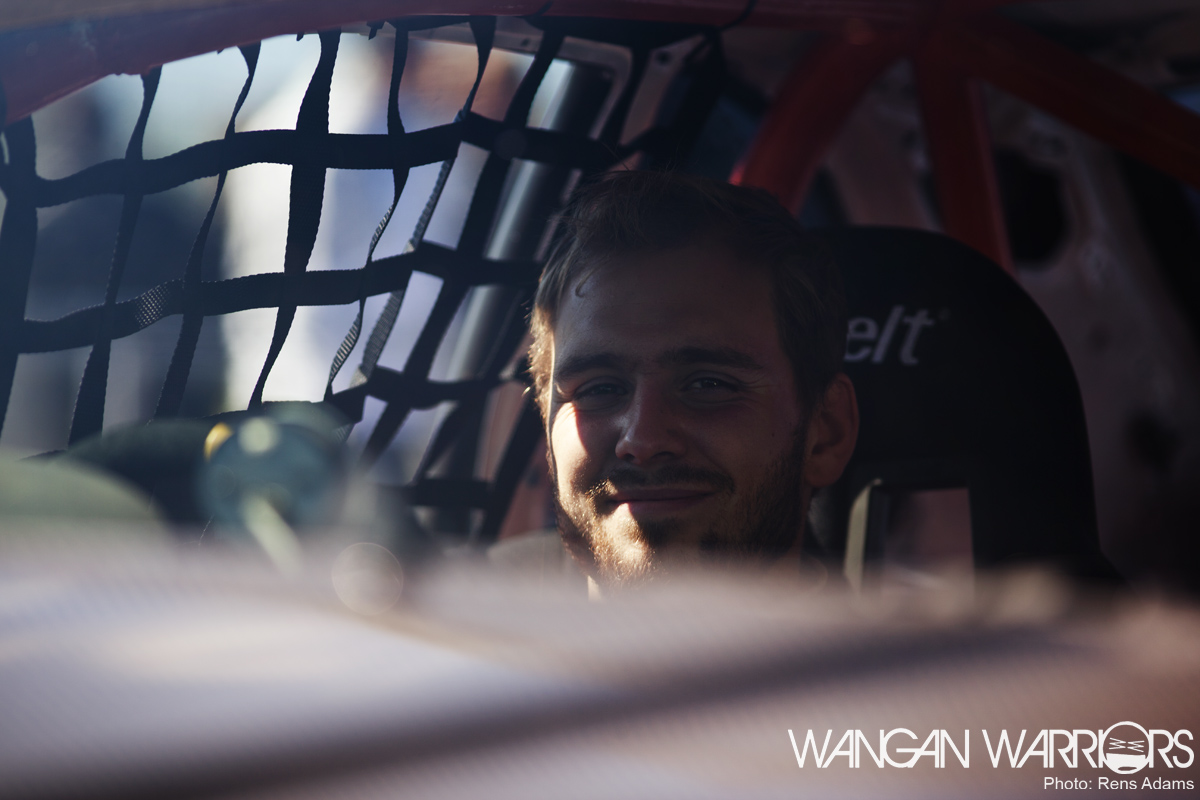 I’ve visited a place where everybody was in a good mood, had great respect for one another and kept everything in a decent order. There were literally no major problems I’ve encountered and I saw smiling faces everywhere I went. I’ve also experienced so many things I could only dream of one year ago such as shooting some of the worlds most famous cars. 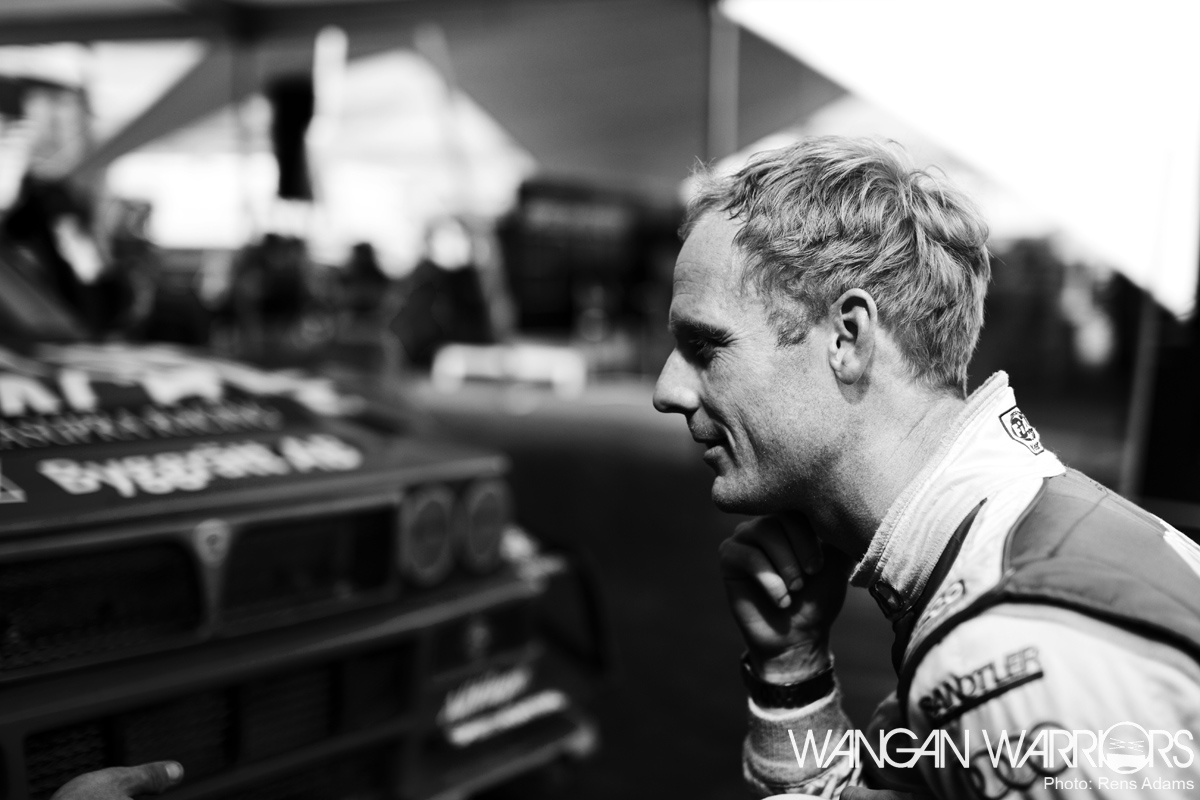 Another surprise for me was to see Edward Sandstöm make an appearance. Again I shouldn’t be surprised because anything possible to happen at Gatebil the only difference is that I’m not used to such things during my average visits to tracks. 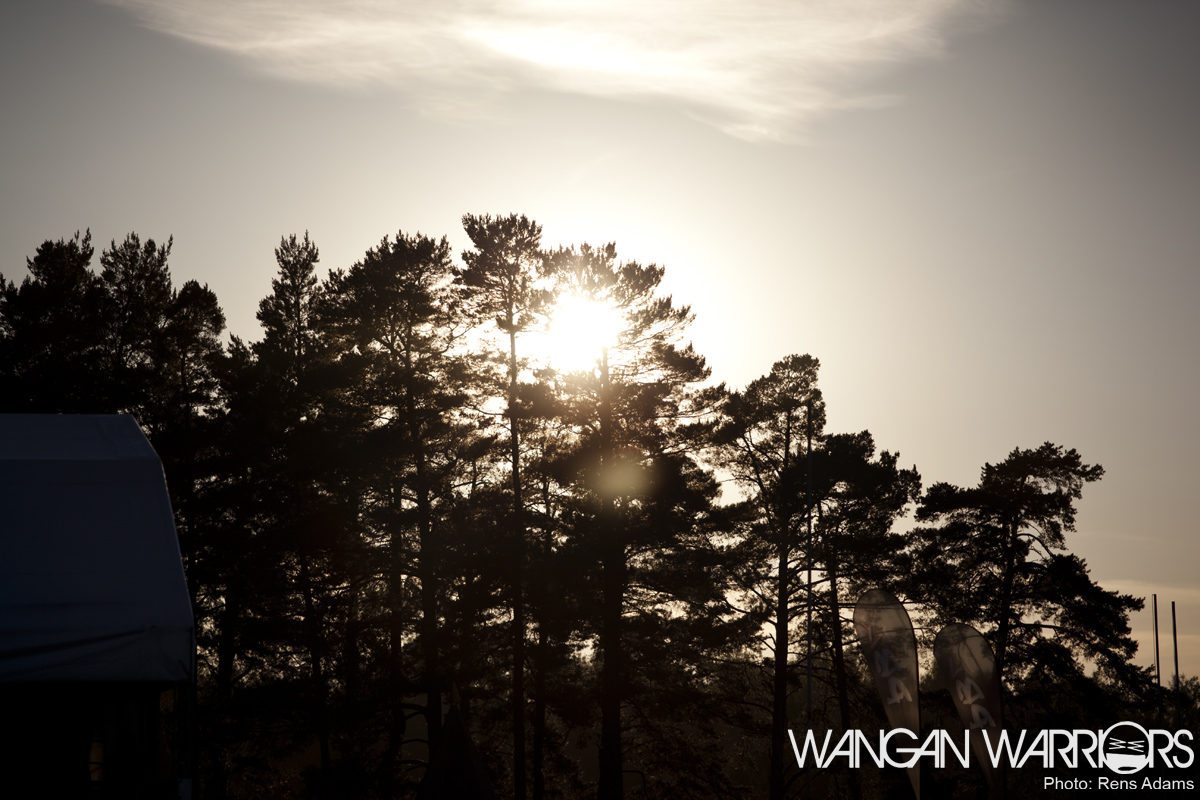 I saw a s13 with an Audi V8. I met a guy who hugged me when he took a look at my camera display. I saw motorcyclists jump over an army tank. I laughed with a couple of the track marshals instead of beeing yelled at. I saw sunlight at 2.30AM. I saw a bunch of guys sitting on the roof of a brand new Volvo and totally messing up the bodywork. I drank Swedish beer. I’ve been on top of action I’ve only seen before in videos. I was covered in rubber grain and actually felt good about it. Was this all a dream? No this was just Gatebil!