I’m head over heels in love with drifting for a few years now. At first glance it looks like a useless pastime with way too much noise and stinky smoke, but actually it’s much more than that. It’s an art form, if you ask me. Driving your car in a way it was never supposed to, trying to find the perfect balance between grip and slide while moving forward at insane speeds, is a test of the abilities and courage of the driver. 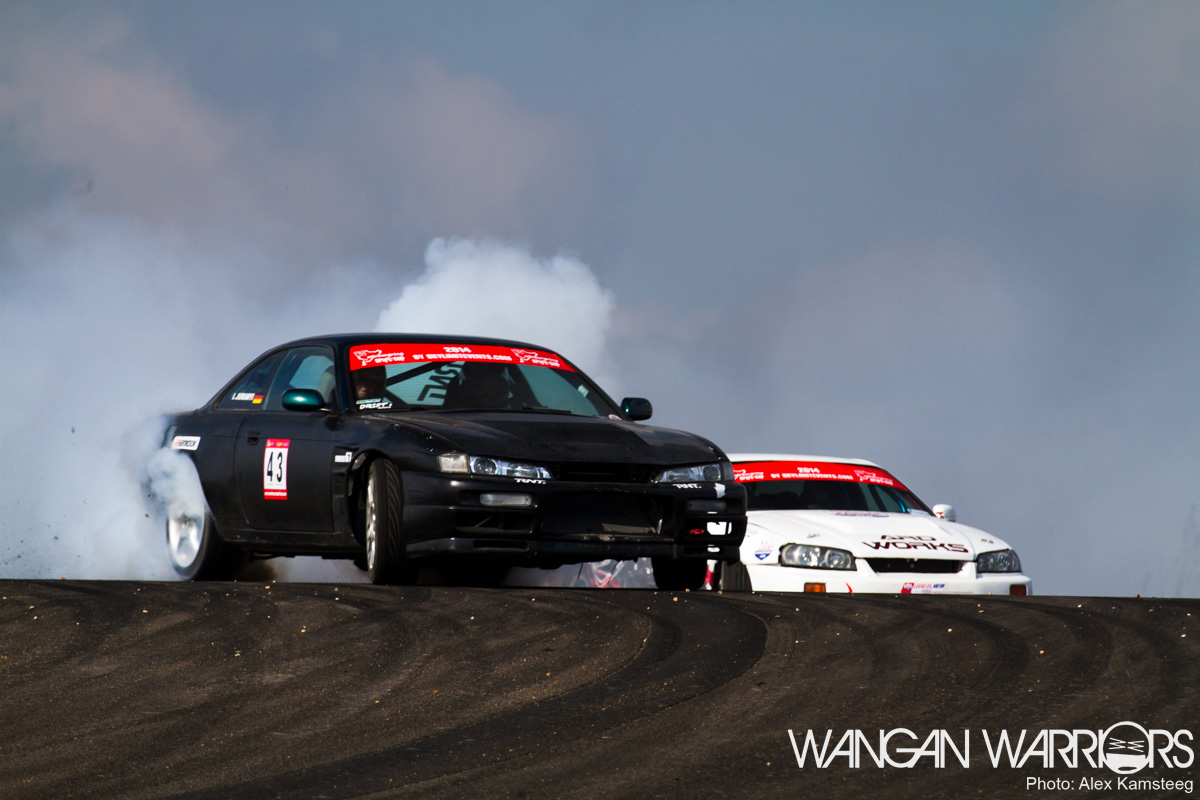 But let’s add another car to the mix, with a driver trying to do the same thing only inches from the other car. It’s like two people dancing, only this time one of the persons doesn’t know which dance they’re dancing and the leading person can switch dances in an instant. For me it’s very fascinating to see two cars dance at speeds sometimes exceeding the official top speed of my own car. 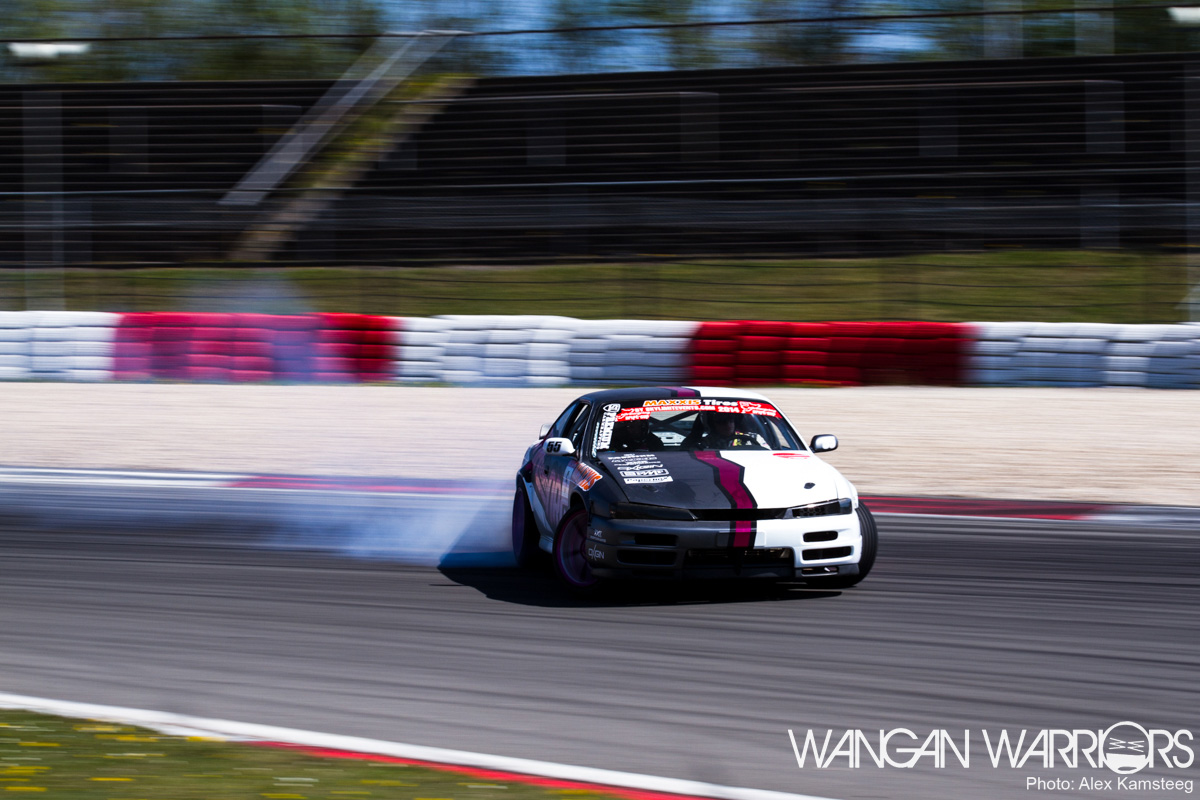 When Maurice visited the Nurburgring Drift Cup last year I immediately decided I had to go there in the future. Combining one of my favourite places on this planet, the Nurburgring, with one of my favourite sports resulted in something irresistible to me. And well, I think you can tell by the title and the first few pictures I gave in to the urge and actually went to the first round of the NDC 2014. 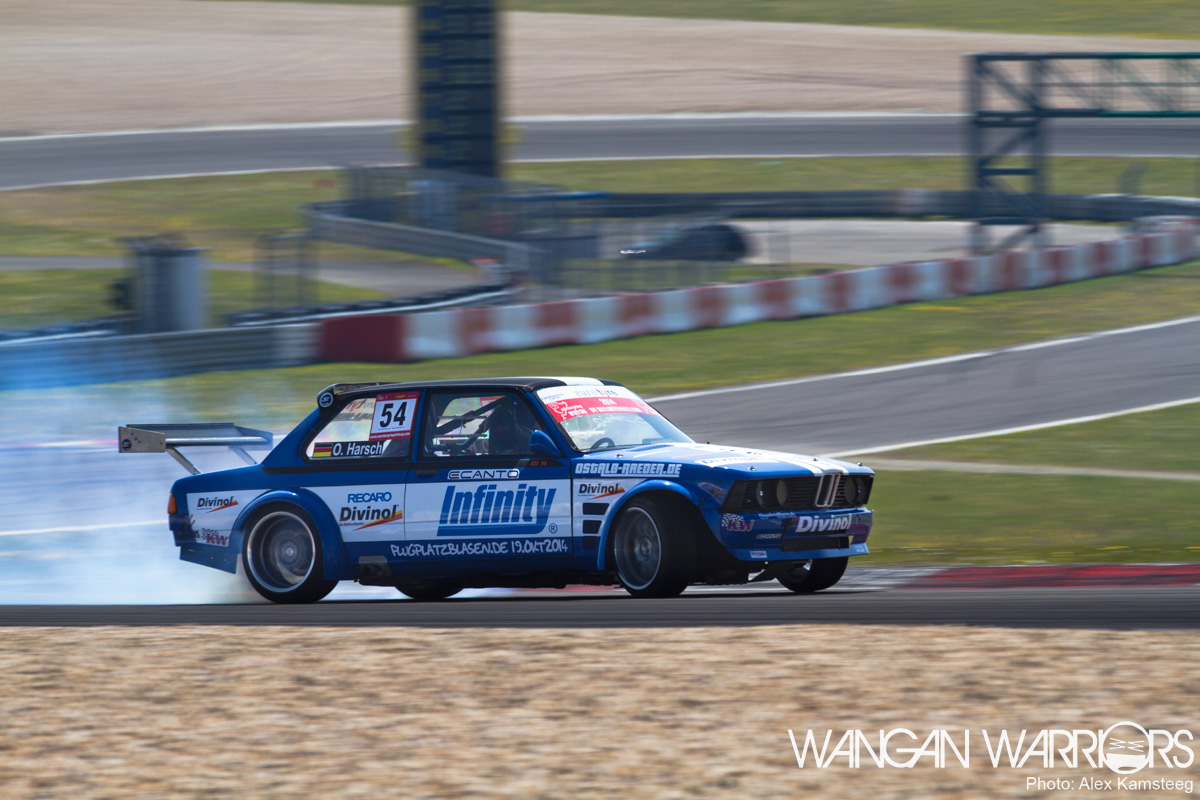 It was my very first drifting event of the year and the perfect start of the show and race season, although it started quite weird for me. I’m an obsessive planner when it comes to events & races I cover and cars I shoot. With an event I’ve never visited before I go online to find pictures of earlier editions, I look at Google Maps for the layout of the track, I make multiple prints of the schedule, I order or trade gear to suit my needs and I start packing and checking a few evenings before I actually leave. Yeah, I’m just weird. 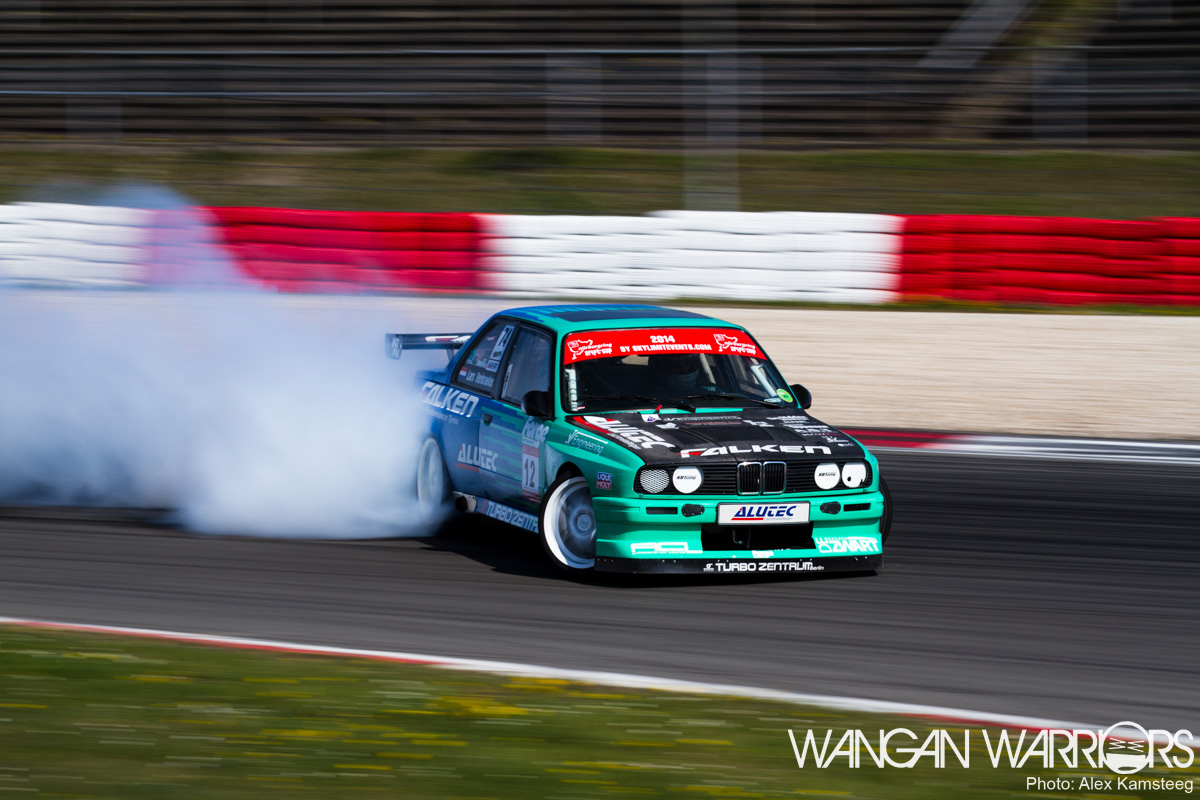 And because of a very busy schedule in the weeks before the event I did none of that. I packed only minutes before leaving my home and I drove to Germany without even knowing the address of the hotel where we were staying. And you know what? I actually liked it. When we arrived I felt like I washed ashore on a deserted island, not knowing what to expect. Take the track, for example. Normally, because of my research, I look at the track from a photographer’s viewpoint. Where are the best photo spots? How are the cars going to take this corner? But this time I noticed the little things that made the course so interesting and difficult while it looked a bit boring at first glance. 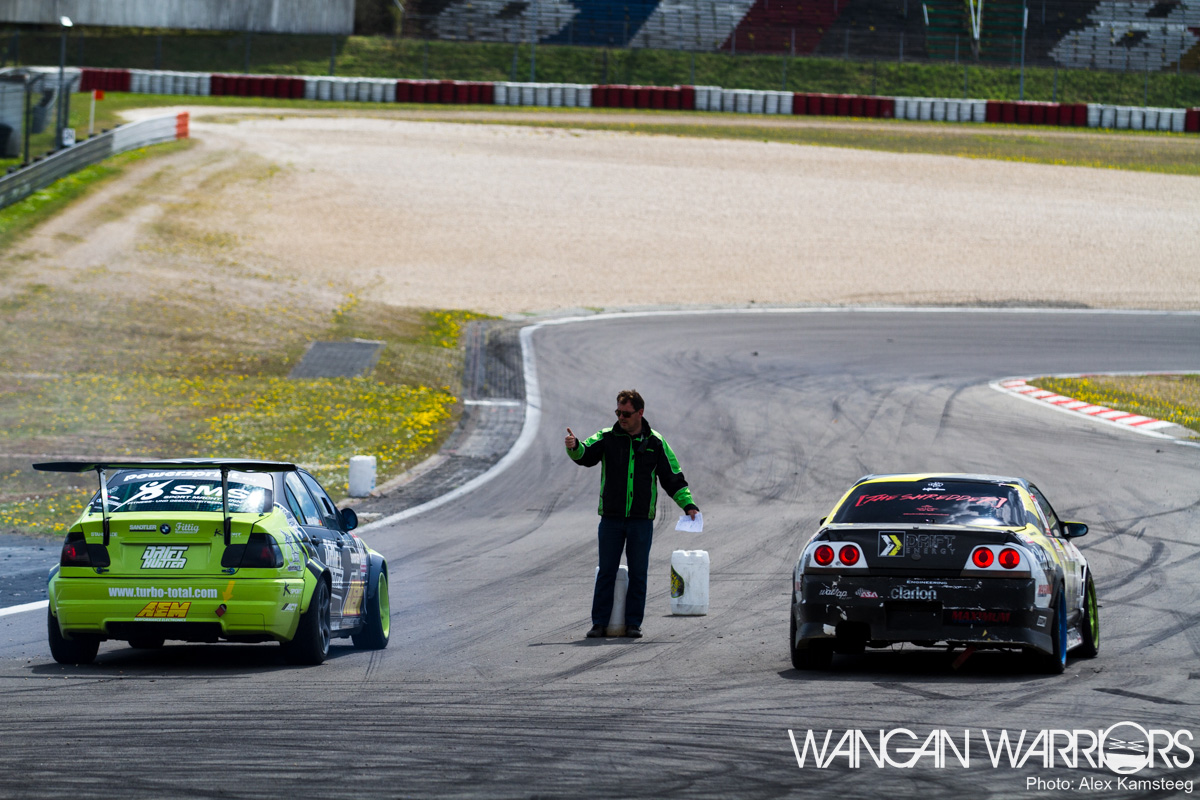 The cars lined up on the straight between turns seven and eight of the GP strecke, the official racetrack part of the Nurburgring. Dunlop, as the eight turn is called, was actually right after the start. It wasn’t one of the judged corners, so in the battles and qualifications drivers rarely drifted through it. In training and free practice drivers used the straight to Dunlop and the corner itself to let their cars cool down a bit, in qualification and the battles it was a perfect corner to build up speed. 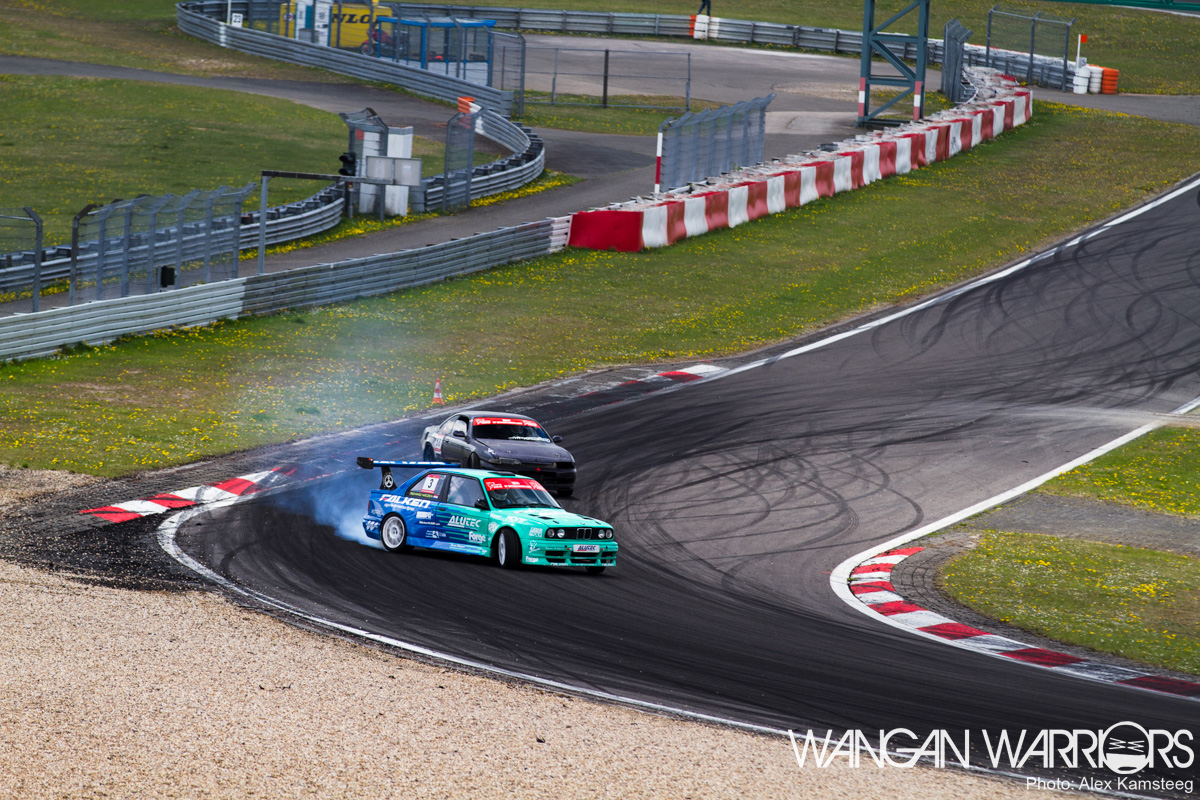 After Dunlop the drivers accelerated hard on the straight towards the Michael Schumacher S and initiated just before the corner. The more powerful cars reached very high speeds here, I overheard a driver telling he initiated with speeds nearing 180 kilometres per hour. A good initiation was key here, ruining that first part of the corner could make or break a run. 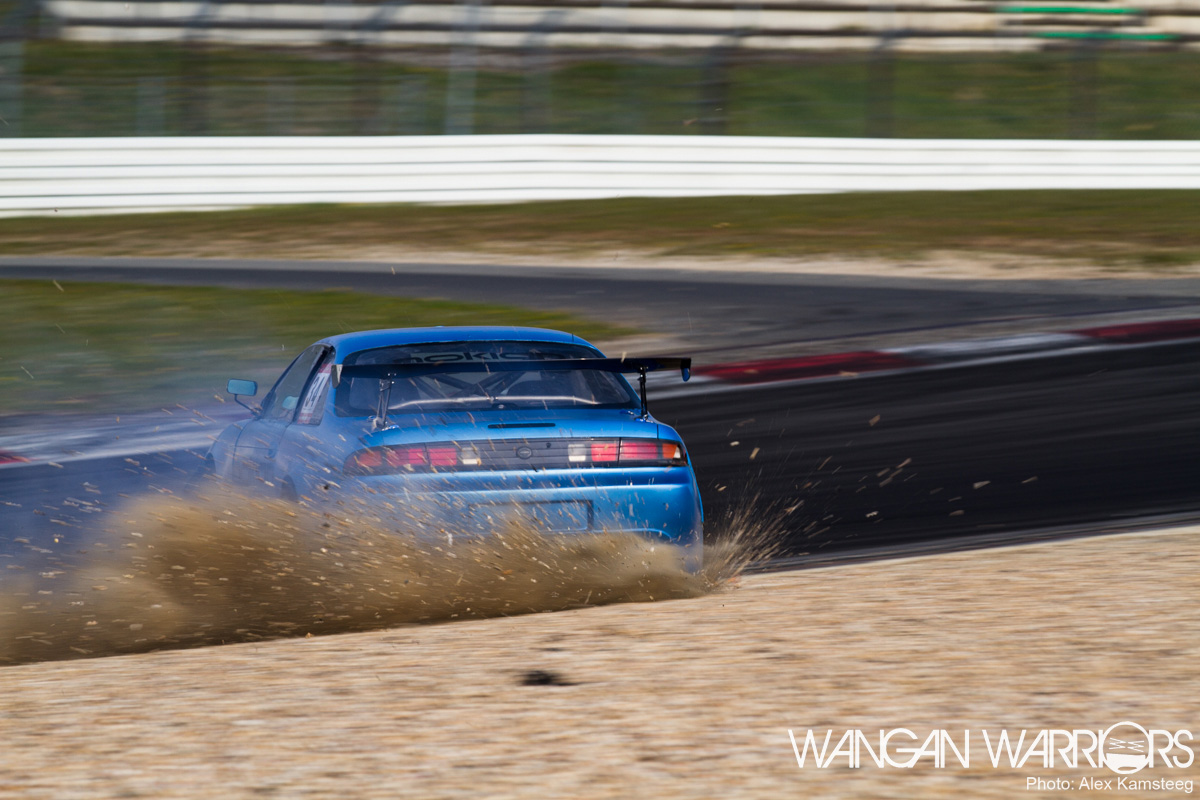 And when driver messed up a nasty surprise was waiting for him or her, the deep gravel at the outside of the corner was more than capable of stopping a drift car in just a few meters. More than one driver needed a rescue when they got trapped in there, especially on the training day when drivers were still looking for the perfect line. 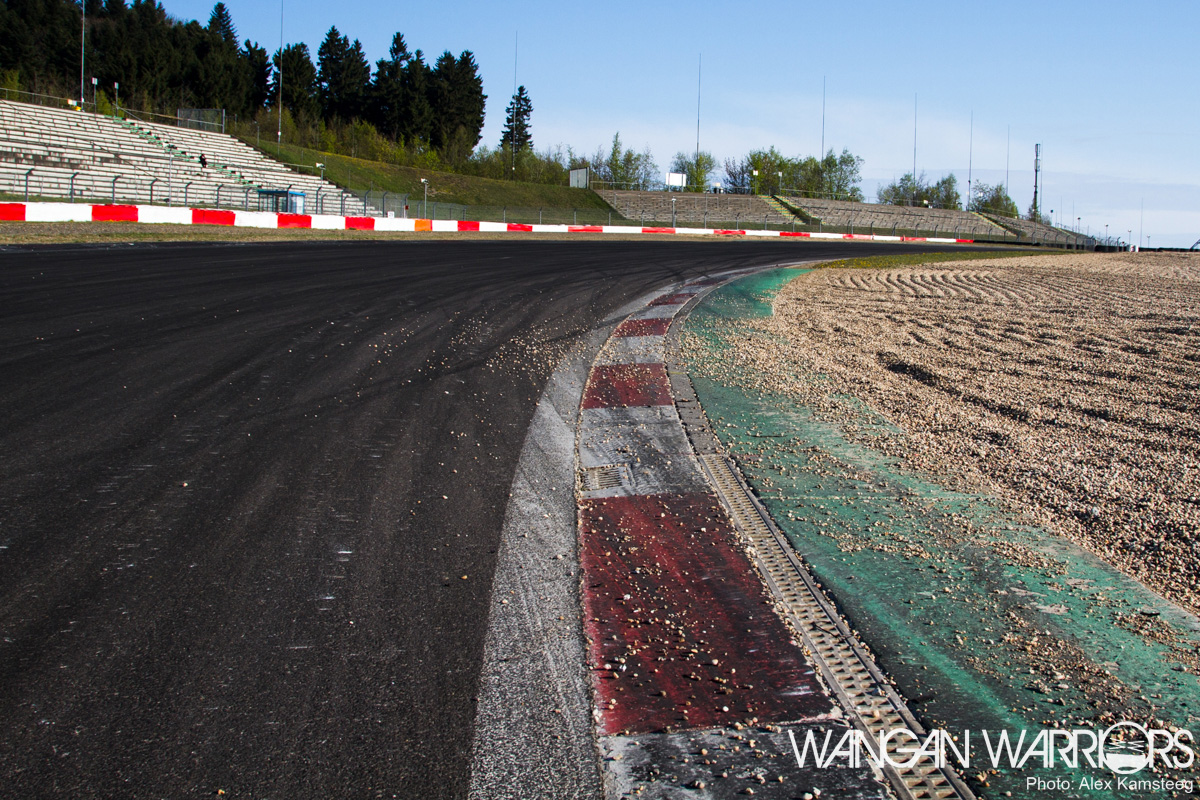 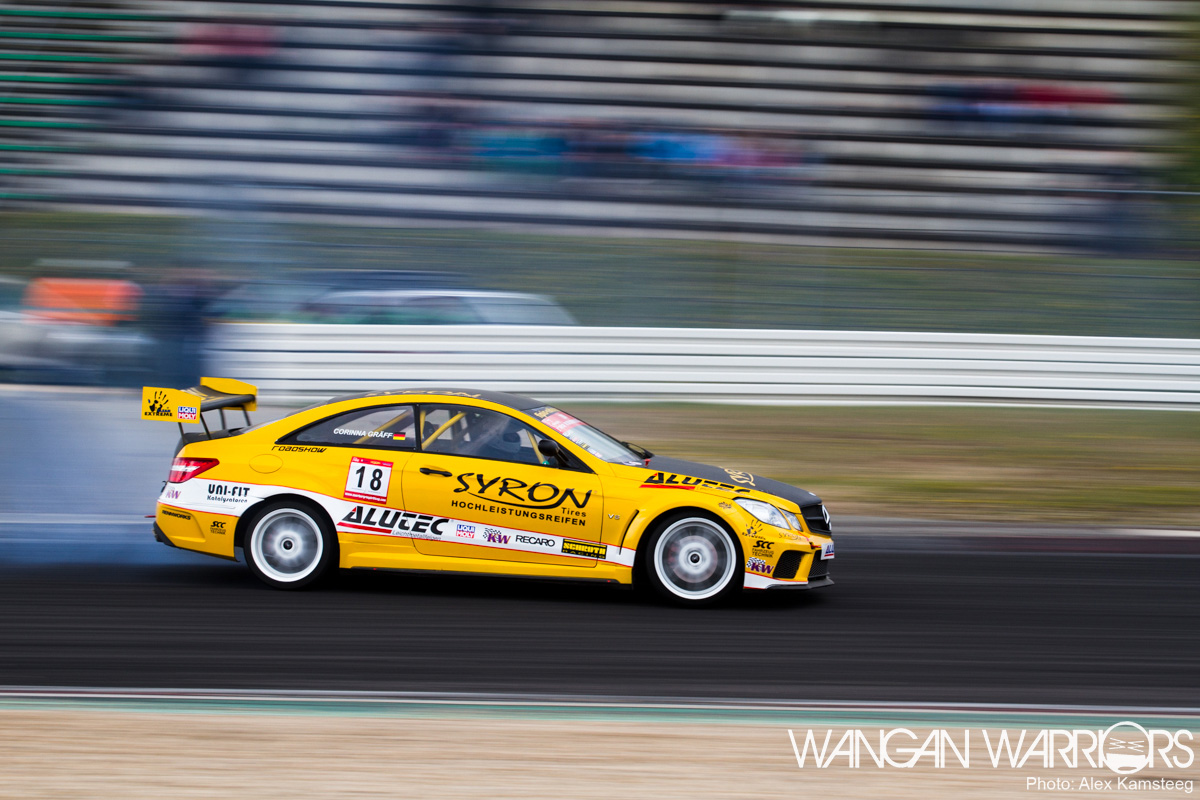 When a car managed to make that first turn with enough speed and angle at the end it could just blast through the rest of the corner. Some of the lower powered cars struggled to stay in a drift here and I think it was an important spot for the judges, because it really showed how good the driver of the second car could keep up with and follow the leader. 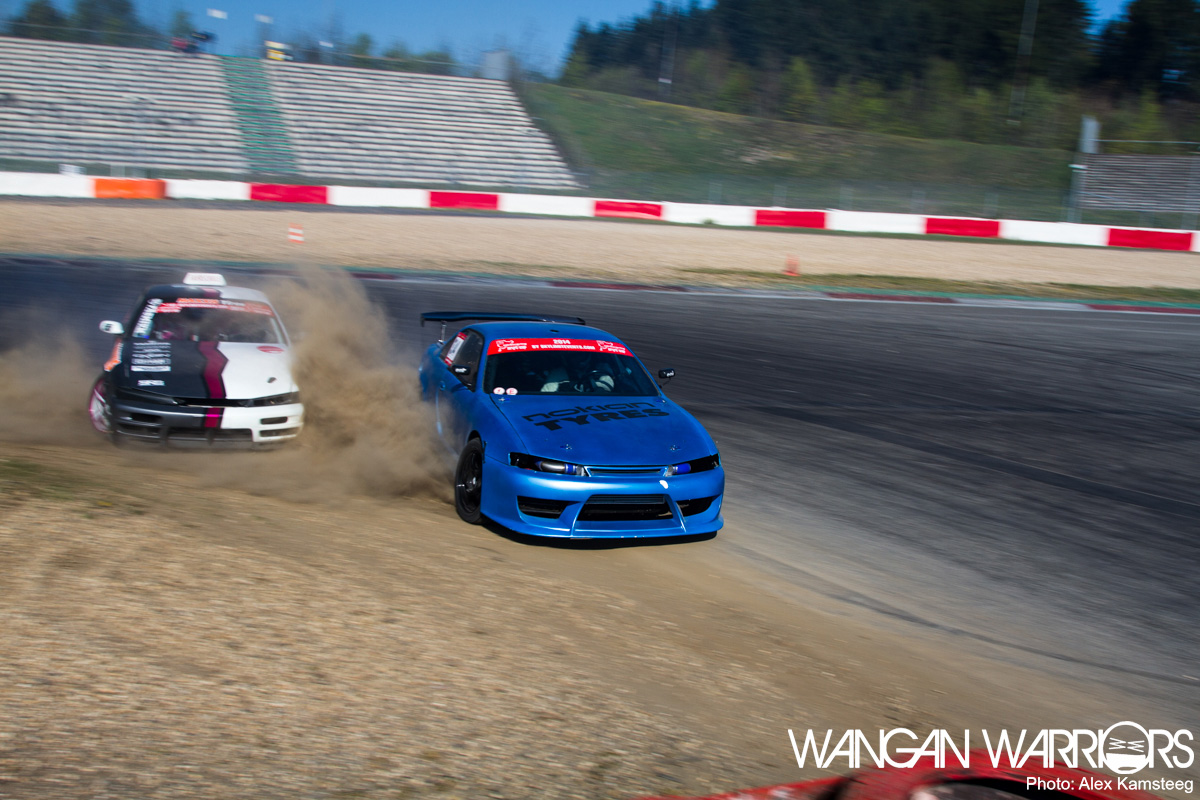 The fast second half of the Schumacher S was followed by a very tight corner to a section called Little Monaco. It was interesting to see which lines the drivers choose to enter this corner. The big and powerful cars had two choices. Some took the inside line and started applying some throttle halfway through. Others braked hard, went for the outside of the corner and stepped on it almost immediately. 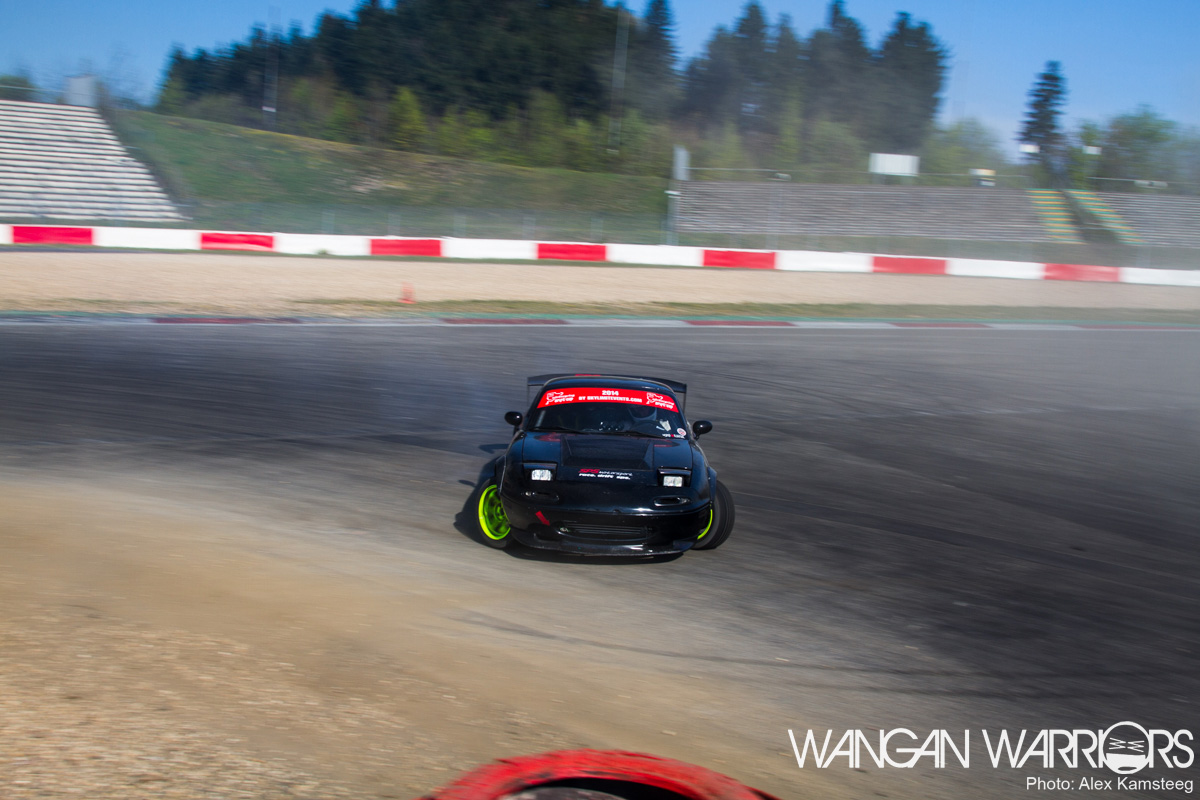 Most smaller and more nimble stayed in the centre and rounded the corner with some careful blips of the throttle. The less powerful cars opted for this line too, because they needed to preserve as much forward momentum as they could. If they lost too much speed they had a big problem on the small piece of track immediately after this tight corner. 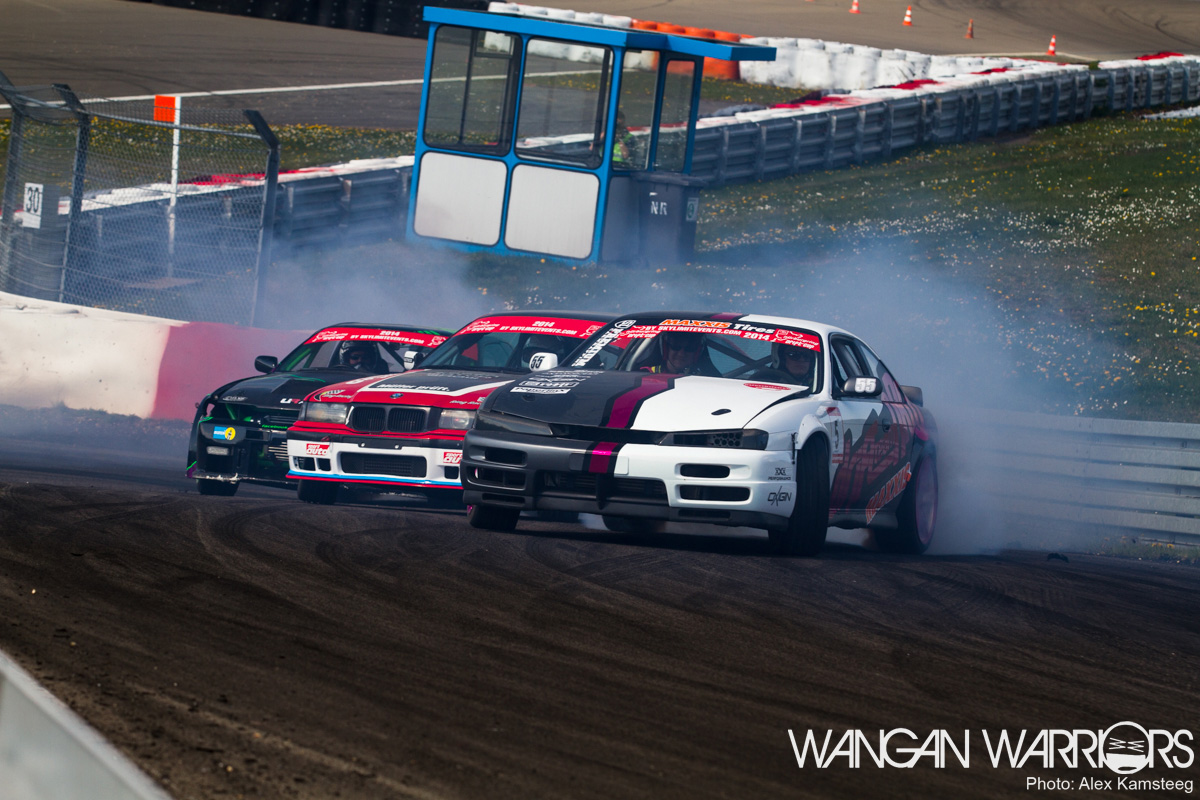 Little Monaco is a steep climb, I think there’s at least a ten metres difference in elevation between that tight corner at the bottom and the turn at the top, and it isn’t a long stretch of tarmac. All the drivers used all the power they had to get to the top. Most cars were bouncing off the limiter all the way to the next turn. 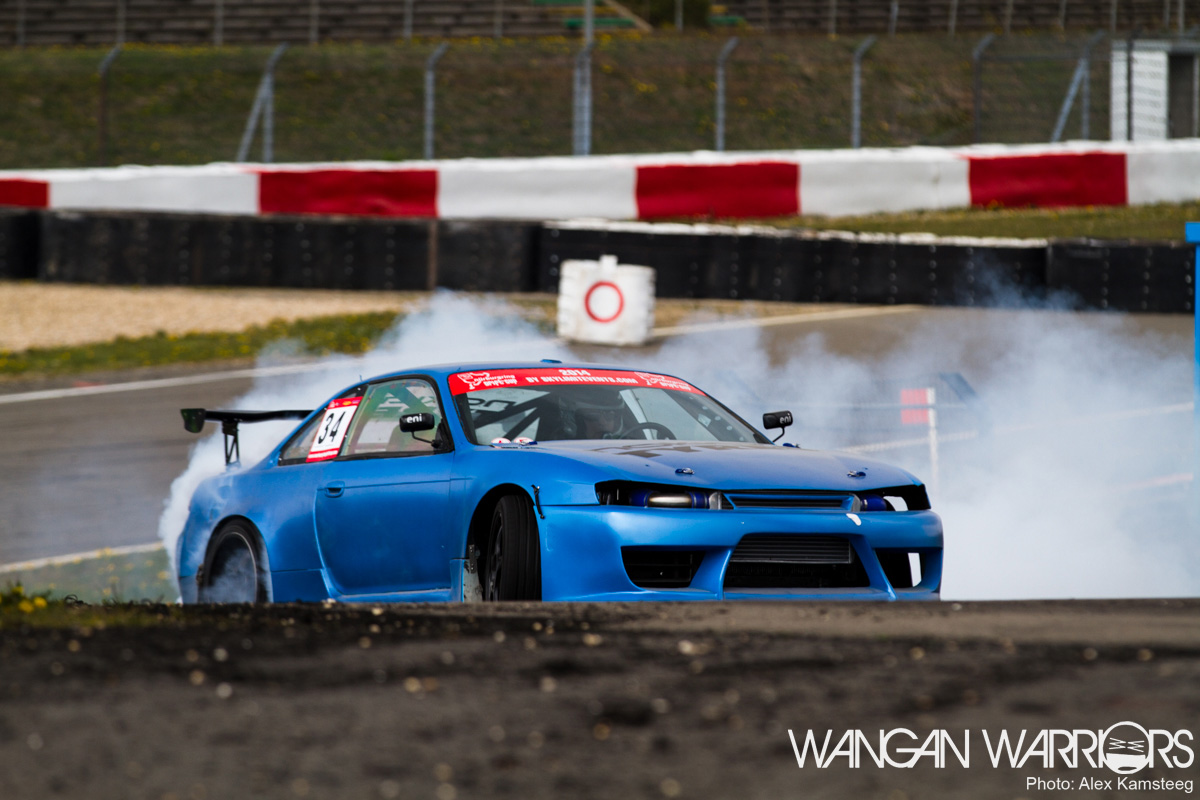 But they couldn’t just use raw power all the way to the top, because they had to transition half way in order to take the next turn right at the top. During training and qualifying a lot of cars actually straightened up and rounded that corner like grip racers, but in the end all the drivers got the hang of it and during the battles most of the cars went through the turn with clouds of smoke from the rear wheels and a nice angle. 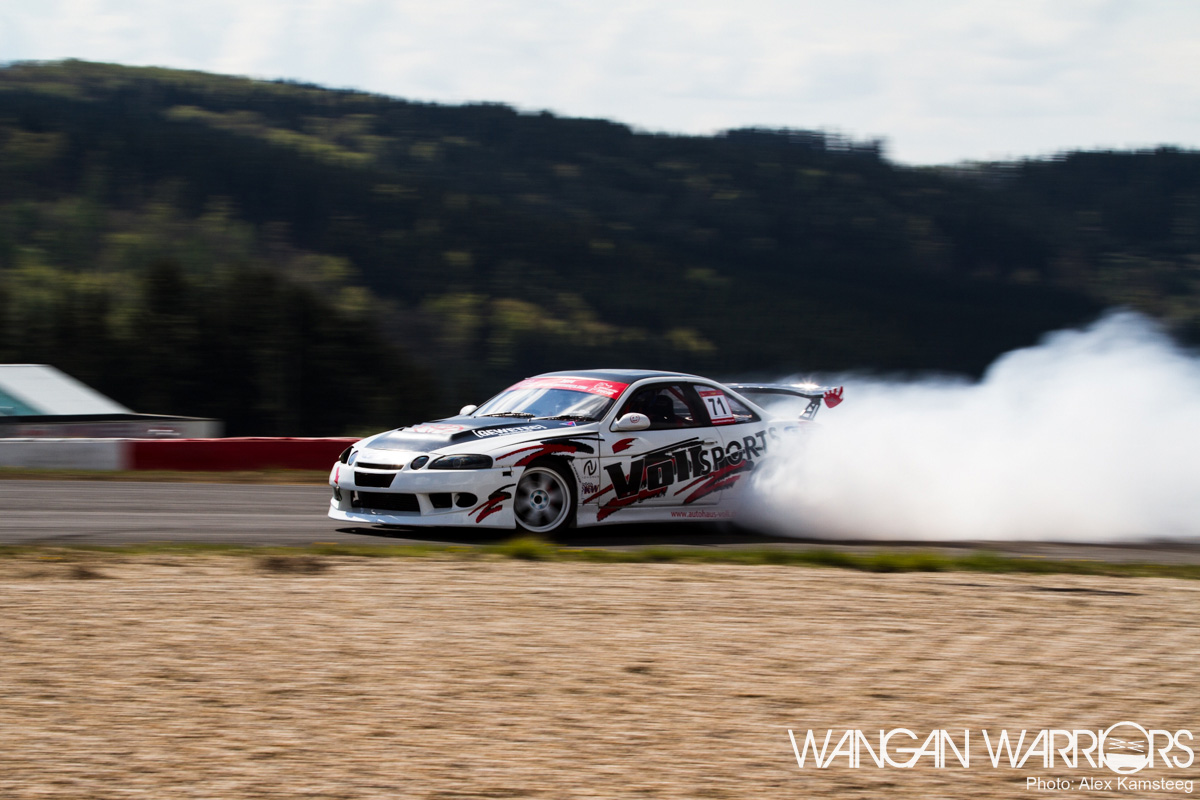 Especially the more powerful cars could generate big clouds of tyre smoke from the bottom of Little Monaco all the way to the top and through the corner. That corner was the last judged one, so most drivers gave all they had for a grand finale of their run. And for me as a photographer it was the most exciting part of the track. I have shots from at least five different positions around that corner. 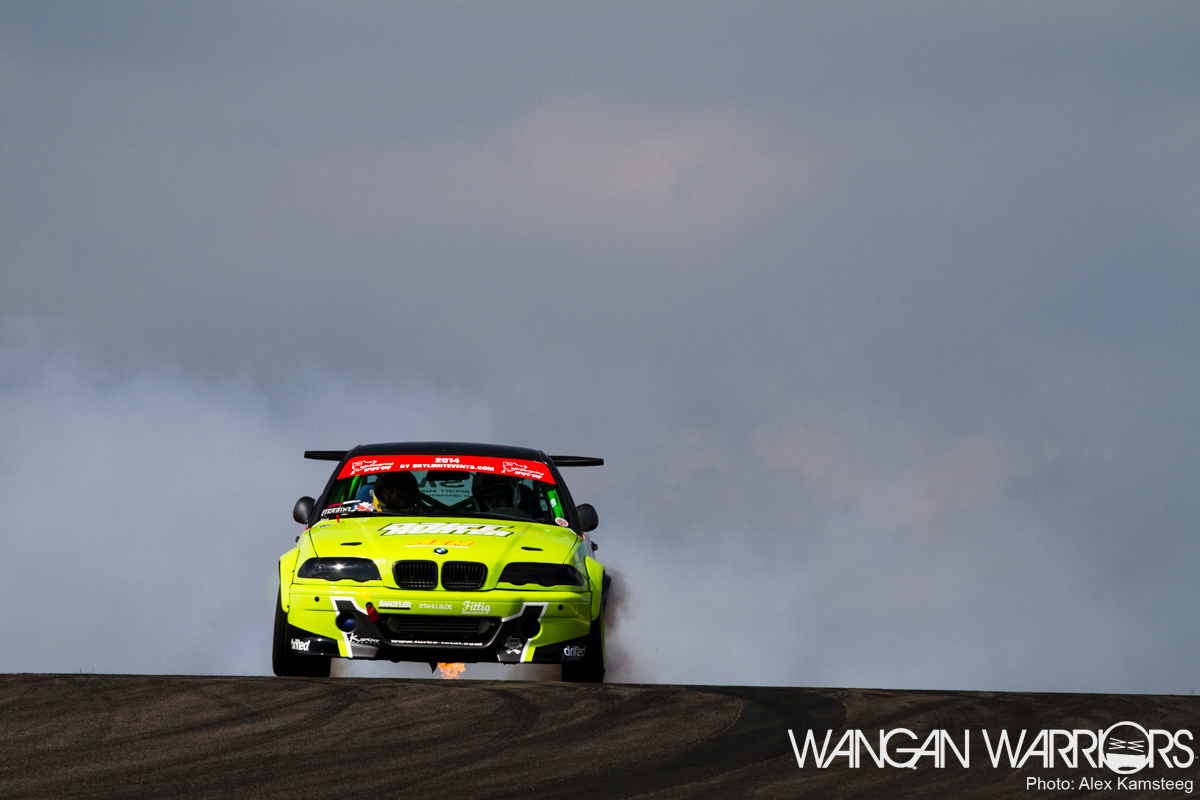 The drop after that corner was awesome. I could stand behind the guard rails at the bottom and watch the cars appear over the crest of the hill. Every driver came over the top differently, some straightened up right after the cone that marked the end of the judged track and eased on the throttle with flames shooting from the screamer pipes. Others just kept on drifting before straightening up on the section leading to corner seven to cool down before lining up again for their next run. 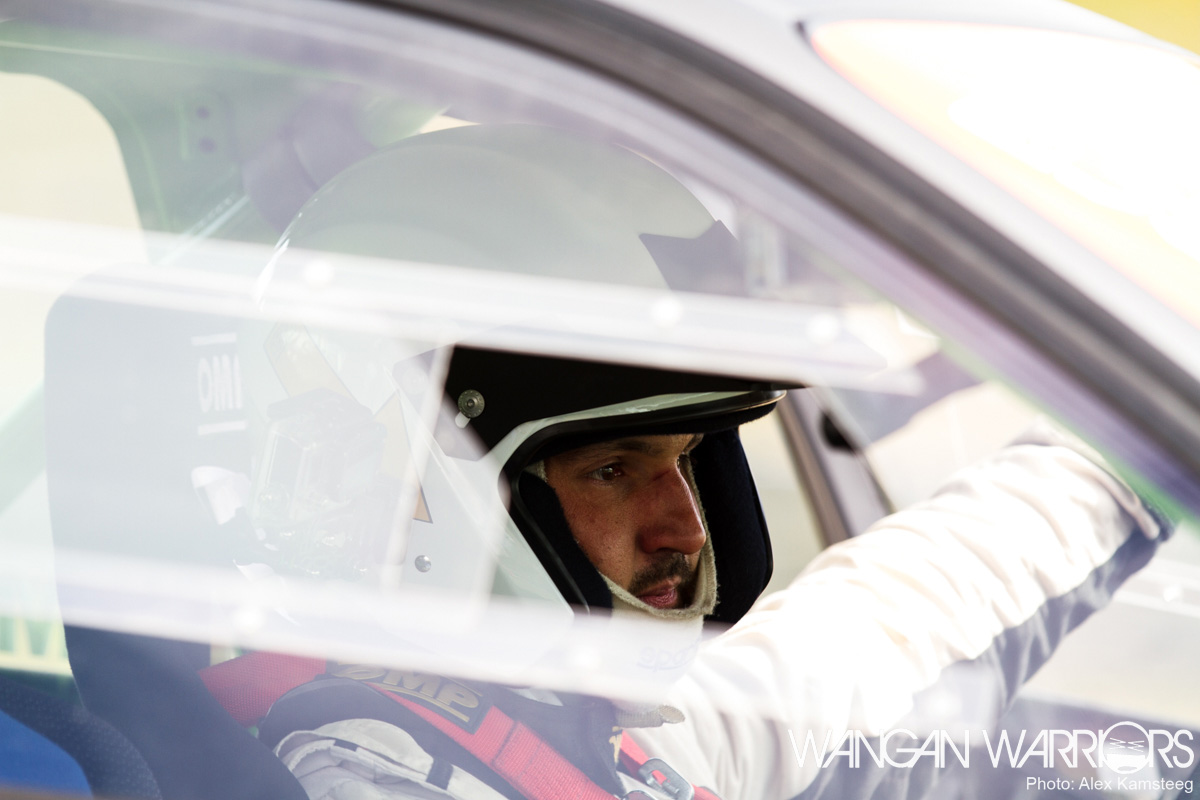 So, that track that looked boring when I first saw it was actually very exciting and demanding. It required the utmost concentration and dedication of the drivers and I loved the many possibilities the track offered. There wasn’t just one right line to drift, drivers could and did choose and that made it fun to watch and shoot. 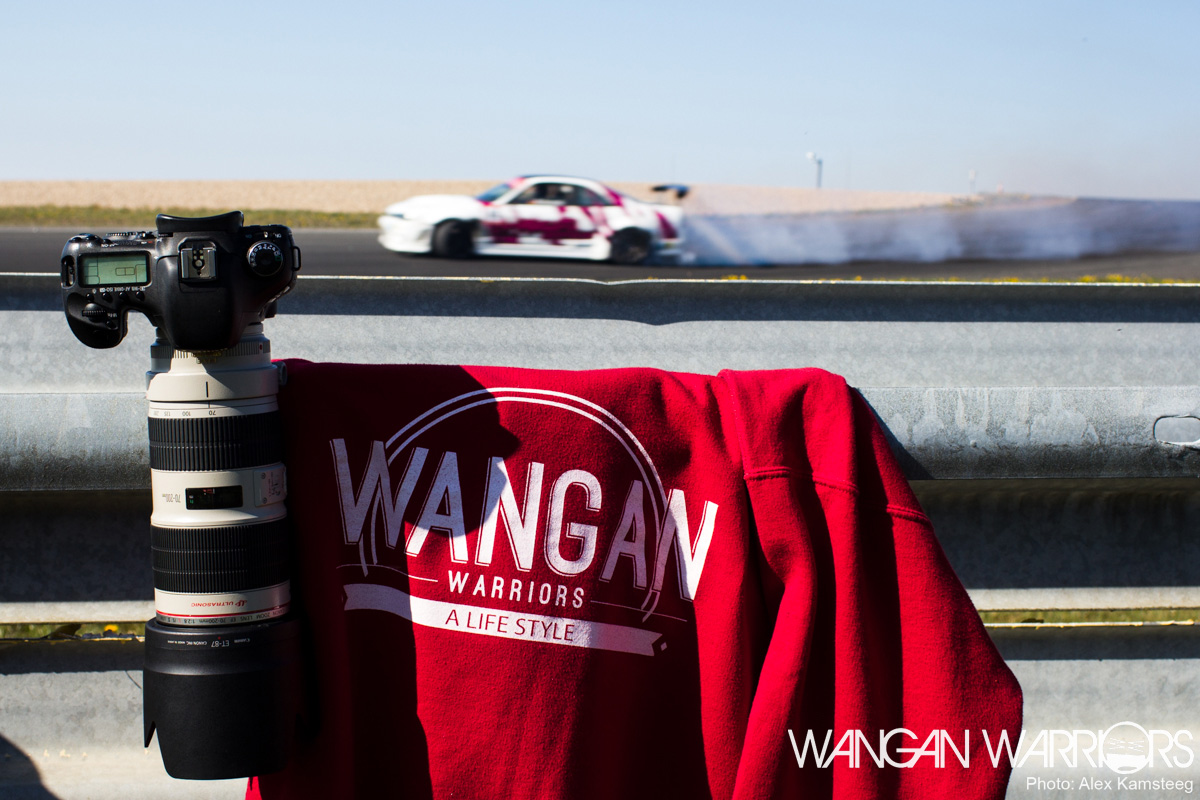 And I love shooting at tracks like this. I like the surprised like cars popping up in the viewfinder of my camera in a whole different place than I expected. The mix of fast and slow sections combined with the need of great driving skills certainly makes this track one my favourites. And now I’m curious, what’s your favourite drift track?