WNGN Guests is a series of guest articles from talented photographers who deserve some attention on Wangan Warriors. Benny Maxwell is a digital artist from Australia and now based in Japan. He has some fantastic digital artwork to share with us. Take it away Benny!

Hey, peoples. My name is Benny Maxwell, otherwise known as Axesent in the digital illustration world. I’m a 38 year old Australian Digital Artist / Mechanic, now based in Japan.
My love of cars began as far as my memory goes back. My father ran a large workshop in Launceston Tasmania, and as a child I would spend most of my free time riding BMX and annoying mechanics who worked there. So I spent my early years surrounded by cars and I had a keen interest in them, and how they worked. This interest in cars led me to drawing them and from around age 6 I began drawing the most ridiculous looking cars you have ever seen. Most of these drawings seemed to be panel vans with oval shaped tyres. (Well, it was the Australian 80’s! LOL). 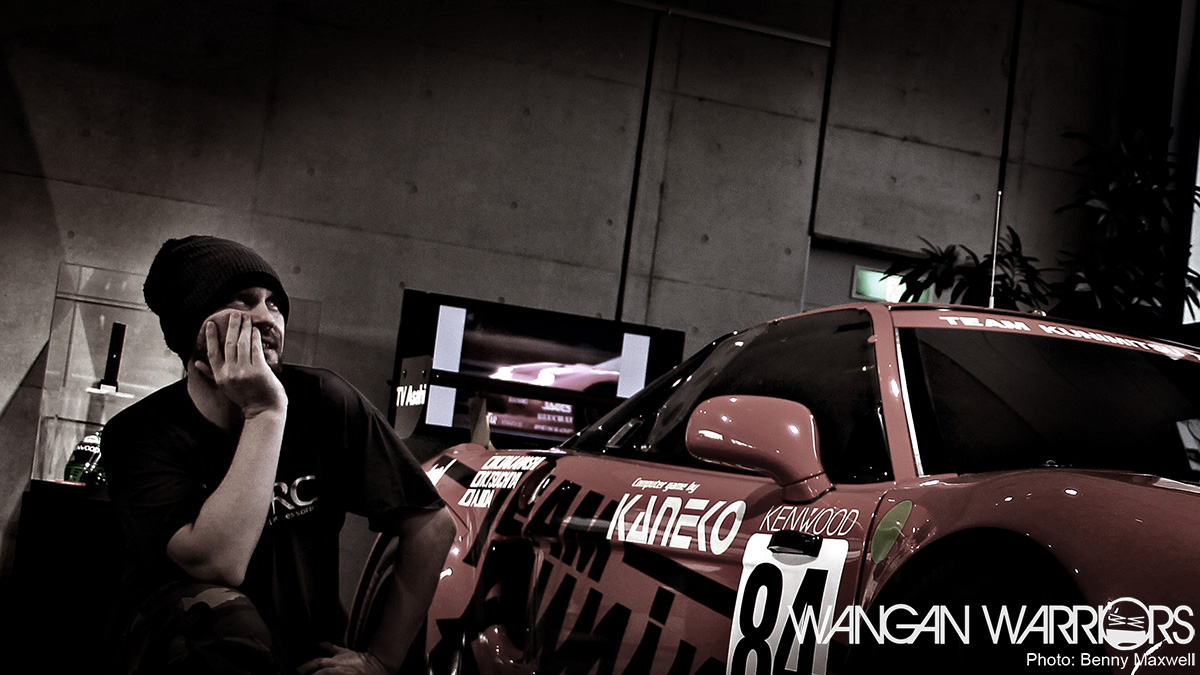 After leaving school, I worked and studied in various areas including Automotive mechanical, Solar Power installs and car audio installs. In late 1998 I became interested in graphic design
and enrolled in various graphic design modules including Illustrator, Photoshop, Typography and colour management. This was the beginning of my “digital” art. With this new found knowledge I would do what most do, and started doing “chops”. Photoshop was my chosen tool and unlike my friends, I knew it was more than a glorified version of MS Paint. Layer masks and pen tools were something they never knew, even though they were using the same program. I knew it was capable of more, and illustrations began. Now in Digital. 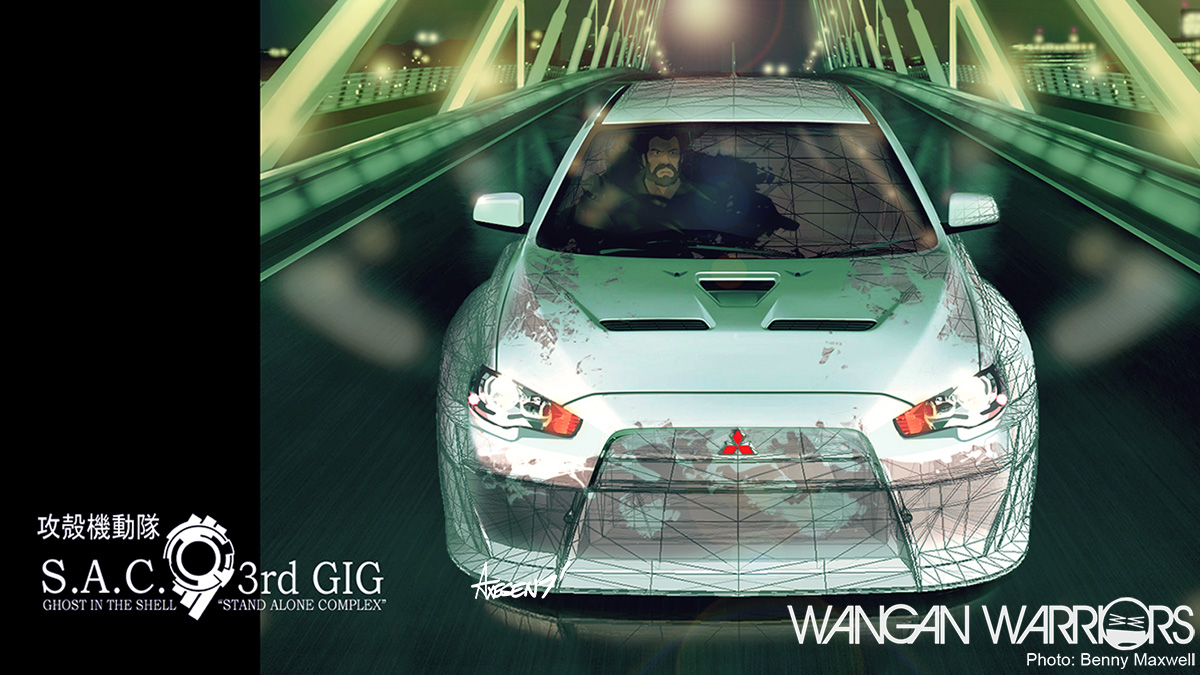 I quit my job, and moved to Saitama, Japan in Feb 2001, Just before the big Quake/Tsunami. Tonnes of foreigners left, so english teaching jobs were easy to find. Though, after 2 weeks
I decided english teaching wasn’t for me. I immersed myself in Digital Illustration and photoshop every day for about 2 years. 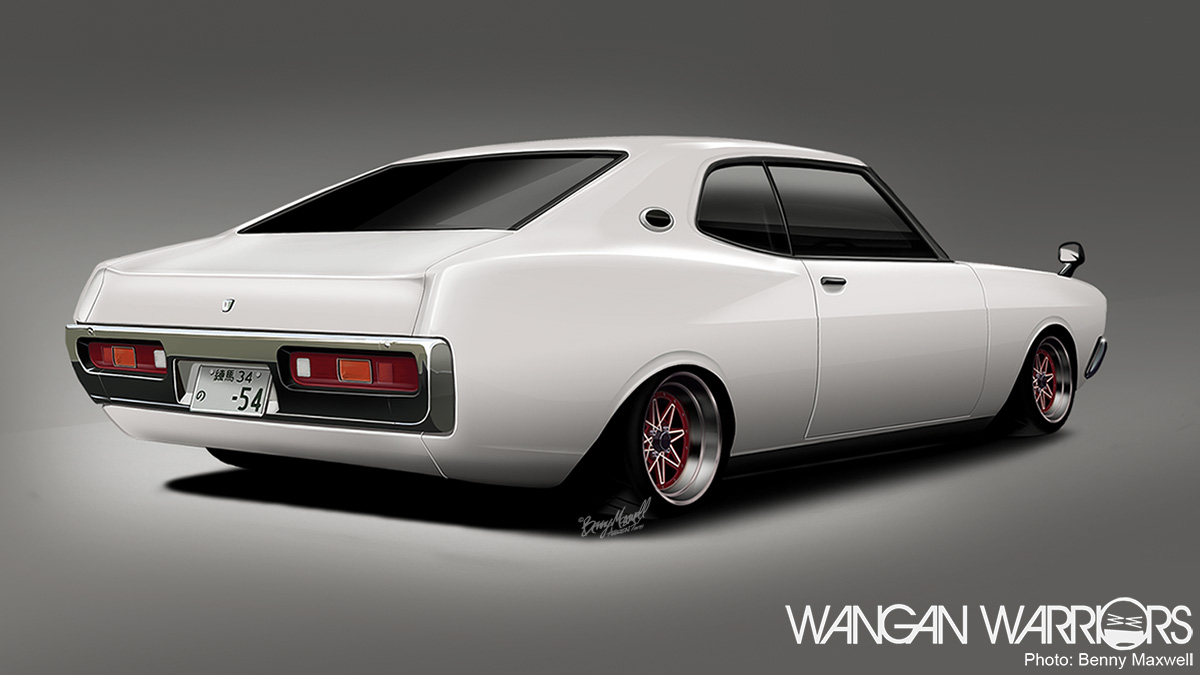 I was getting some odd jobs here and there, illustrating peoples cars. But I needed more money! I was lucky enough to get a full time position in a Japanese workshop. I worked at Garage “Modify” in Asaka-shi, as a mechanic for nearly 2 years before I had to head back to Australia for family reasons. But all this time, I was still doing illustrations. 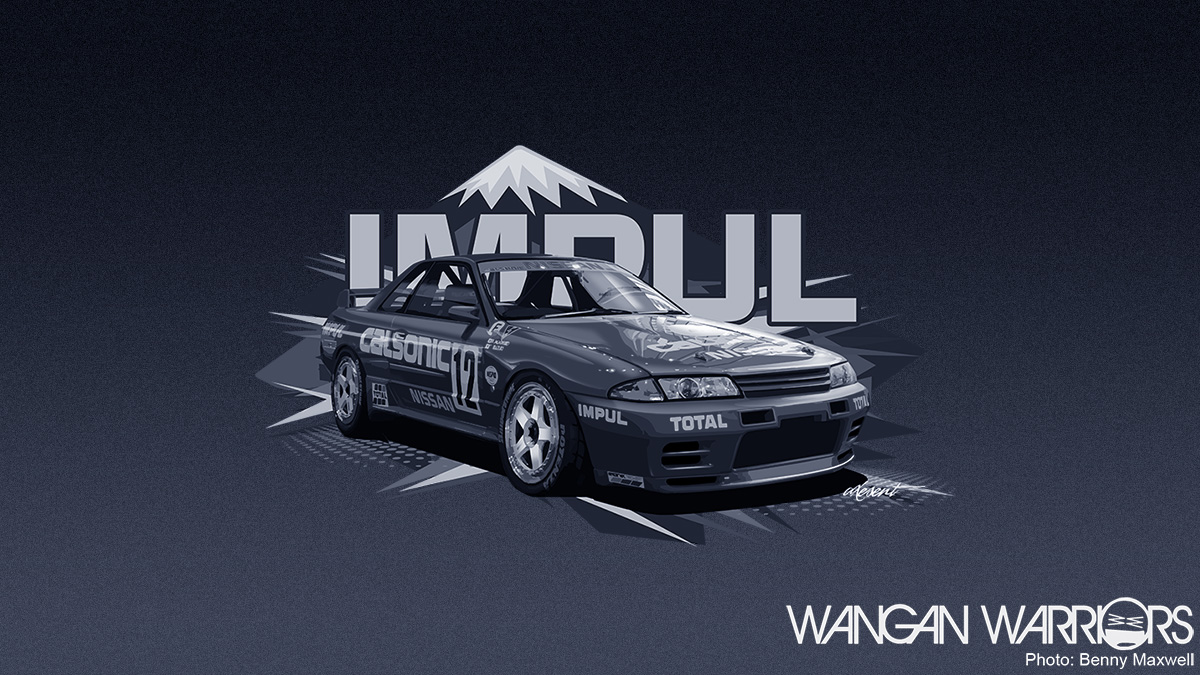 It was about this time I started to render the images differently. It’s what I like to call “transparent rendering”. With this, I’m able to create the image of a car,so any paint colour or livery/decal etc. can be added under the image and still retain it’s realness and gloss look. So instead of flat looking livery proposals, an image can be offered that will show the customer very close to how the car will look in real life. To create templates like this can take a long time, but once it’s done, it’s very easy to produce livery designs and/or pre project planning images. 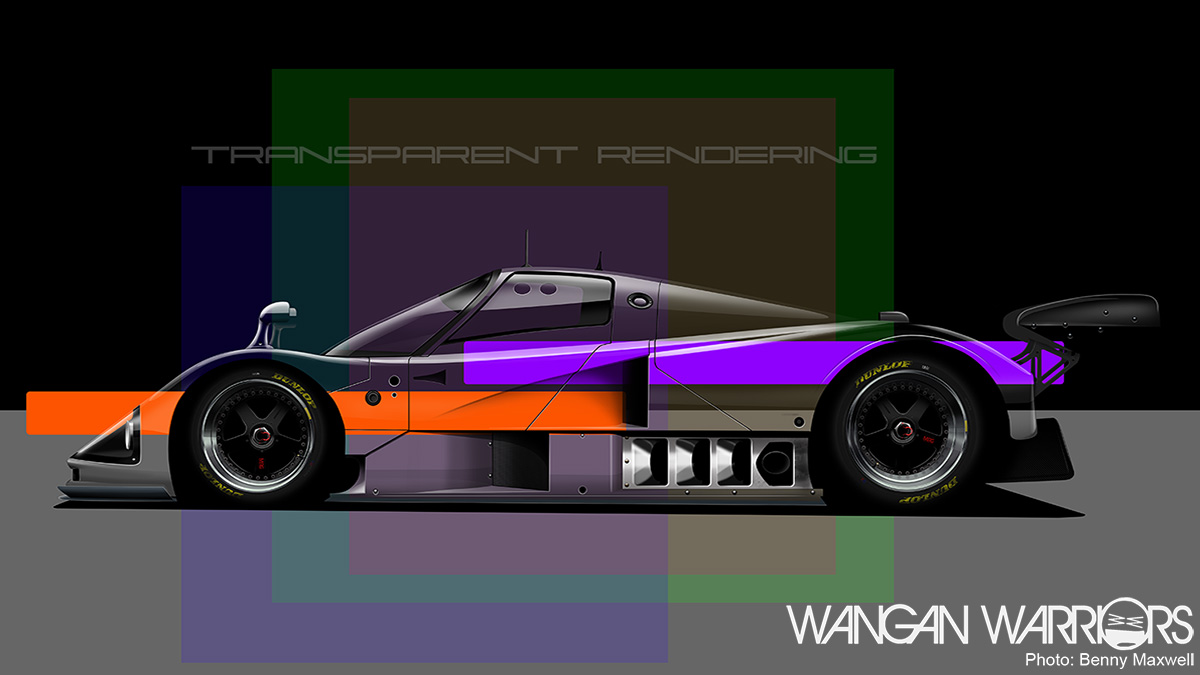 I have teamed up with the one and only DIMI from Drifthunts on a few occasions now. Dimi supplies great line art, so I can just get straight into the rendering part of the image. 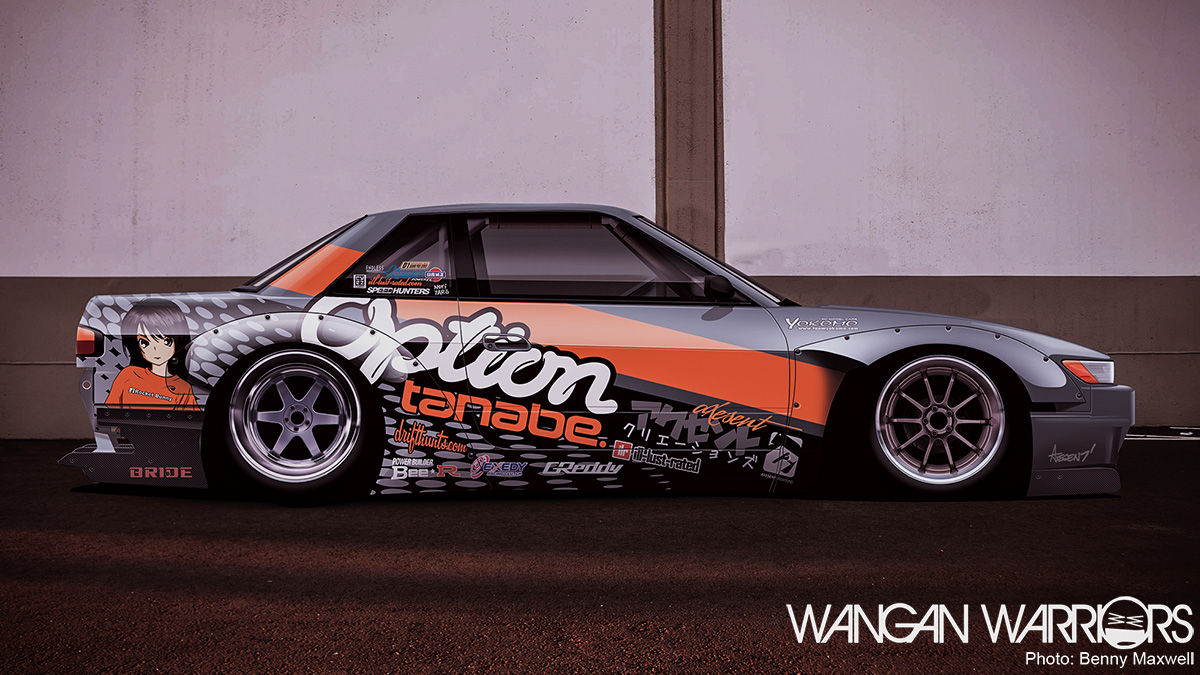 N.B. Background in this image is a photo. In the end, the line art is all covered up, but still very necessary for highly detailed images. Rendering on line art makes the final image very exact and more easy to detail. I hate doing line art, so when I do an image from scratch, I do the bare minimum line art needed to set my overall render. Lazy with line art, that’s me. 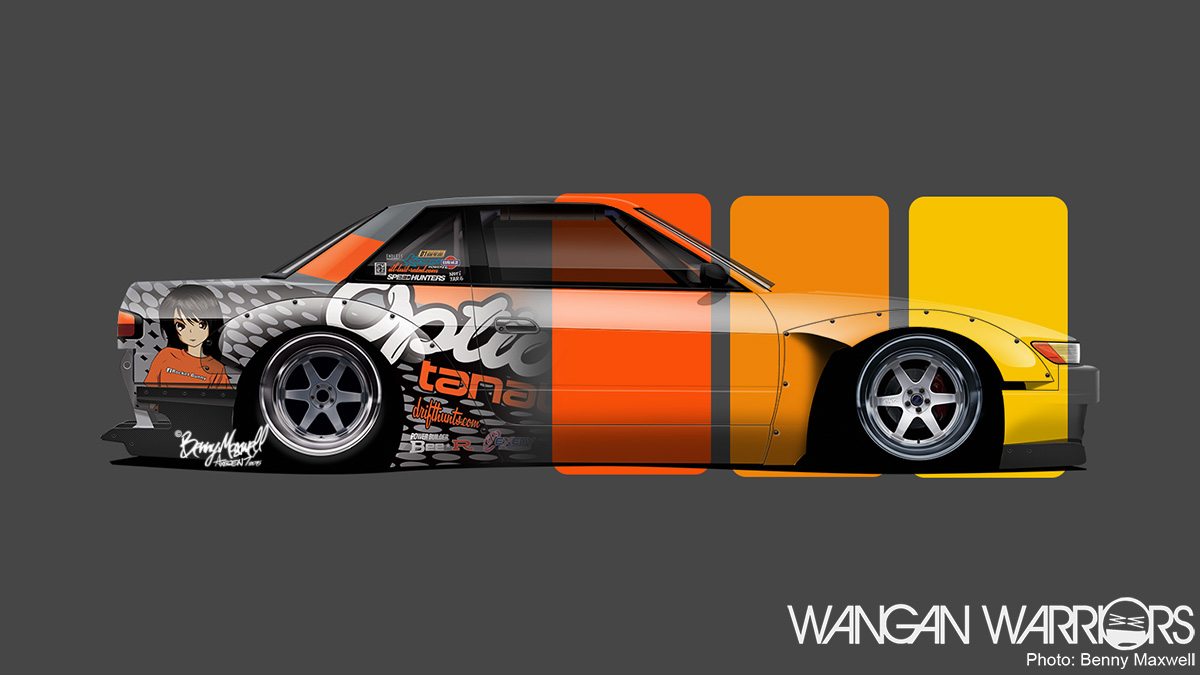 Details! No detail is too small. Even though you won’t see the writing on the bolt heads holding the wheel together, I still render it at the size of the wheel and shrink it to fit. It all adds up in the final image, and I think my biggest issue now is getting people to realise my pictures aren’t photos! I have many doubters. So recently I have been adding videos to the facebook page removing every layer, one group at a time to show that, it is infact, not a photo, and there is no element of photo in the image. 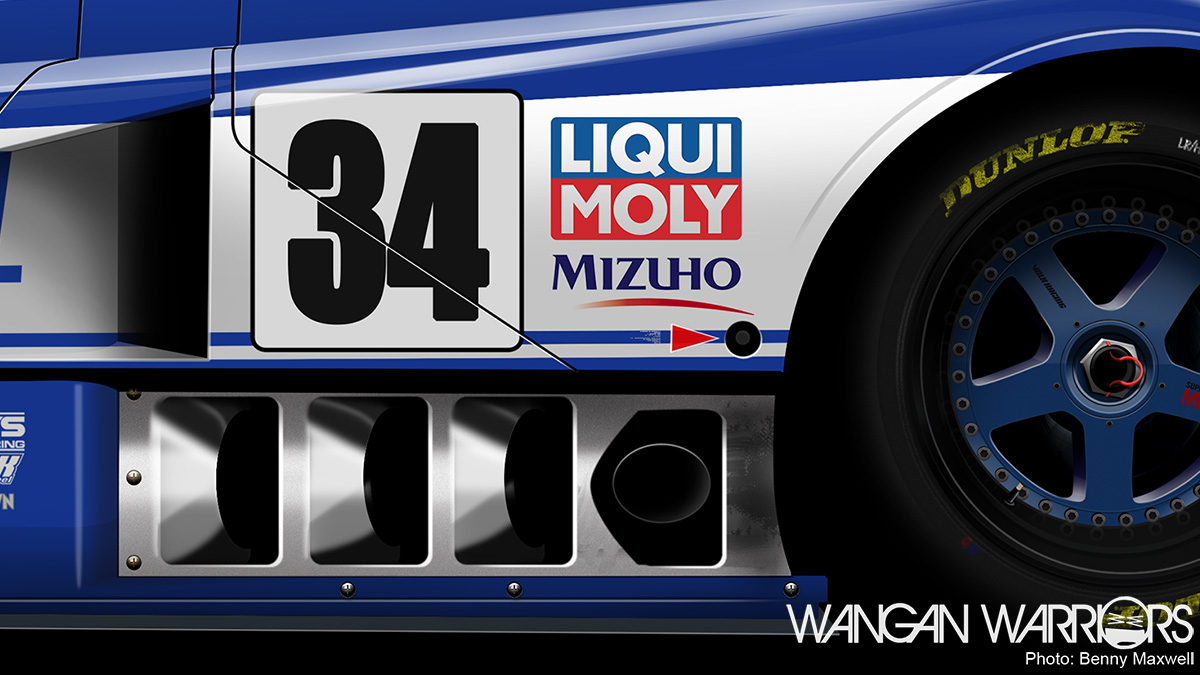 I get asked often. Why Photoshop? Why not Illustrator? So much infact it gives me a headache. So I’ll try and cover it here. “Illustrator” conjures up images of Illustration, of course. That’s one reason some people use it. “Vector is best!” says the person who flattens and saves their Illustrator pic as a Raster file. Yes, Illustrator is the goto program if you are doing certain illustrations and outputting to print, in various sizes. Vector is great, I agree, and I use Illustrator a lot. The way I illustrate and put images together in many cases can’t be done in Illustrator. And, my main aim is to make my illustrations as close to photo quality as humanly possible. Photos are pixel based, as are my illustrations. Personal preference. You use what you like and what’s suited to the output of the media being made. 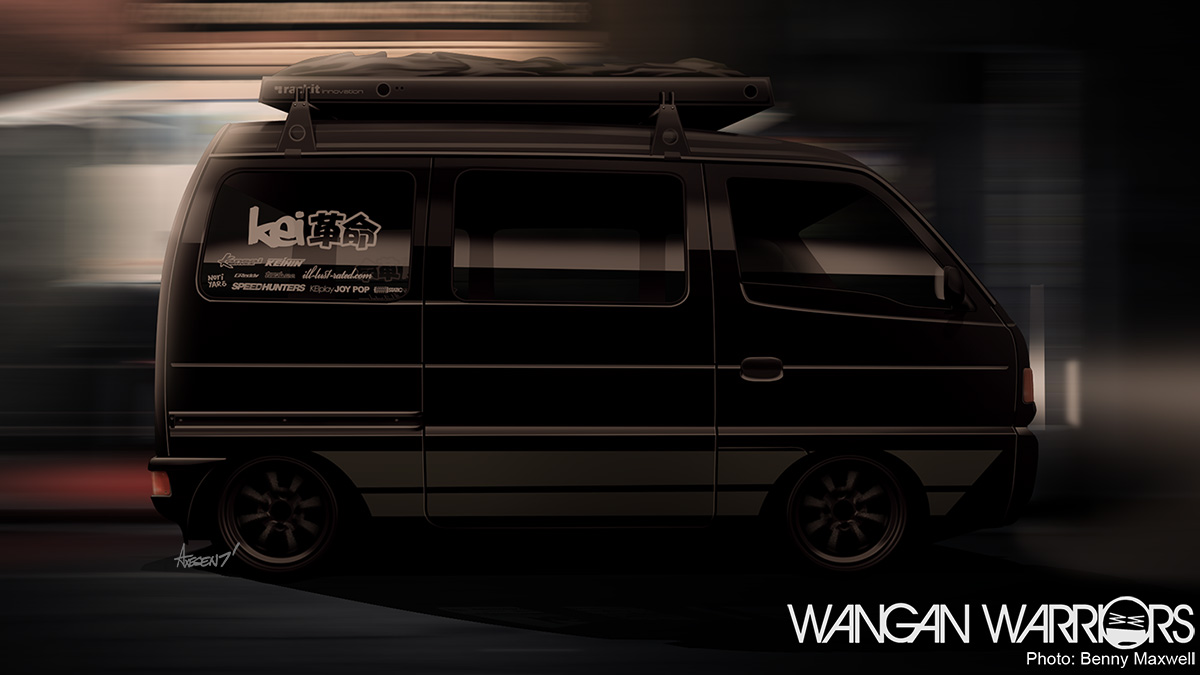 I think every time I do a piece, I learn something new about lighting and shadows. My way of illustration is very much dependant on lighting. Lots of thought have to go into the rendering before the pen tool is even selected. All the lighting, gradient form and brushing is done by hand /mouse. Illustrator has the gradient mesh, yes, but I often think that’s a little like buying the latest Tamiya model kit, and having someone else paint it for you. 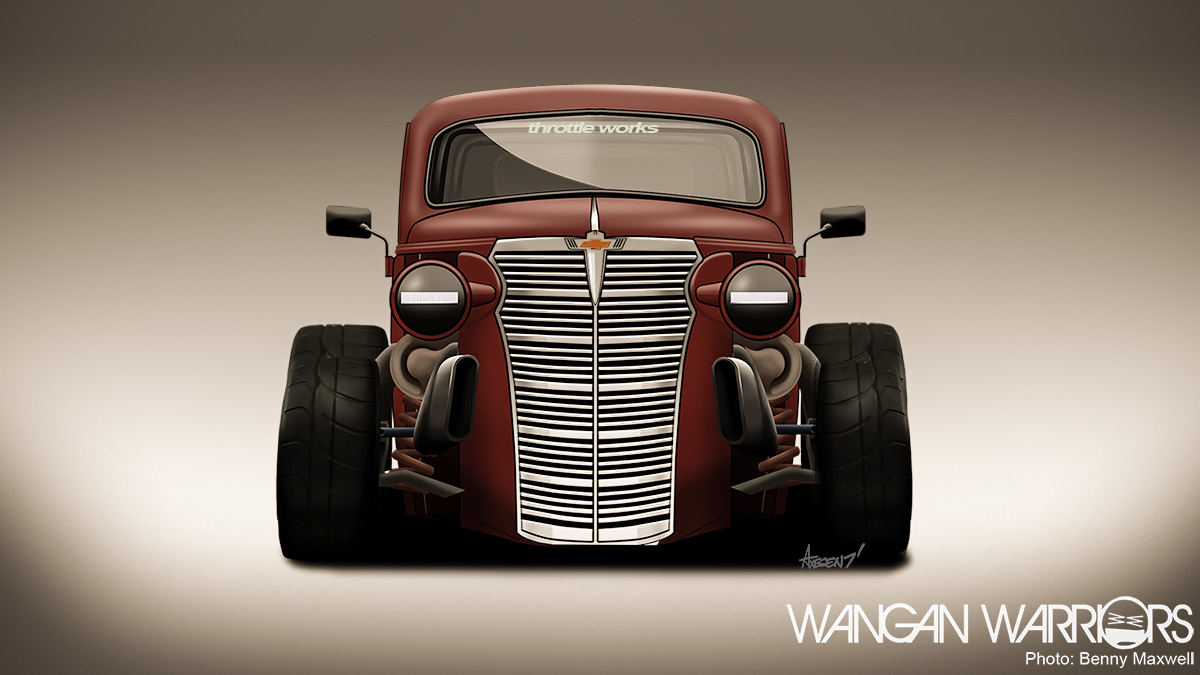 I have recently been involved in quite a few projects that will be seen in real life this year, and there will be more collaborations with Dimi from Drifthunts in the near future. There will be a lot of good stuff to look out for this year!!

On closing, I have to thank all the Wangan Warriors crew for putting together a great site, and to Rens Adams for inviting me to drop in and show you some images. I hope you all enjoy and appreciate the time and effort that goes into creating some of these images. Drop by the facebook page to keep an eye on what’s going on.

Thankyou for the support!
よろしくお願いします。