Rocky Auto, Star Road, Mizuno Works. Just some names that should ring a bell when it comes to restoring classic JDM machinery. Especially Rocky Auto is known for it’s wild engine and drivetrain conversions. But it’s not “just” the Japanese that know what they are doing when it comes to crazy builds. In the first article I gave you a sneak peek about what DBM engineering has in store for this ’71 KGC-10 “Hakosuka” but now it’s time to reveal how unique this project really is! 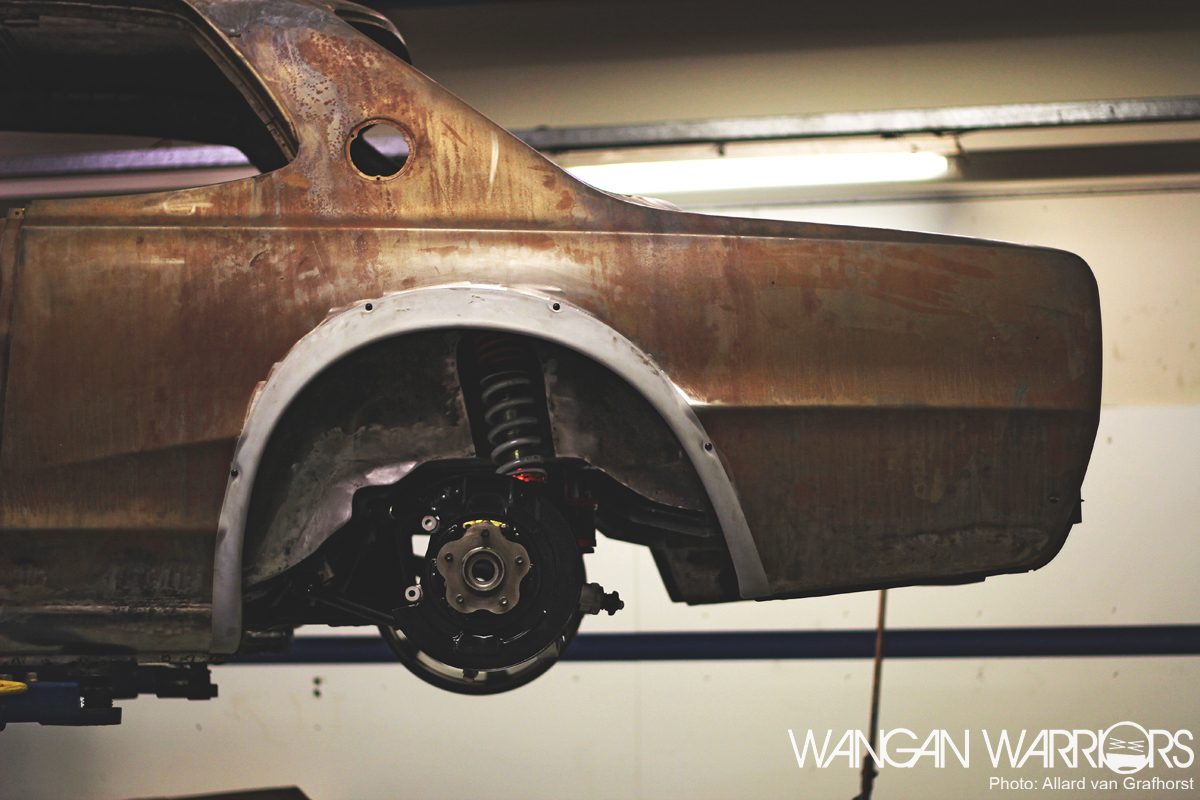 The main point of this build is to make it as modern as possible while maintaining the cars original character. In other words, it has to drive like a BNR chassis but still look like a classically styled Hakosuka, wide fenders and Watanabes included!
But driving like a BNR (GT-R32/33/34) would mean that it’s got to have four wheel drive and an RB26… 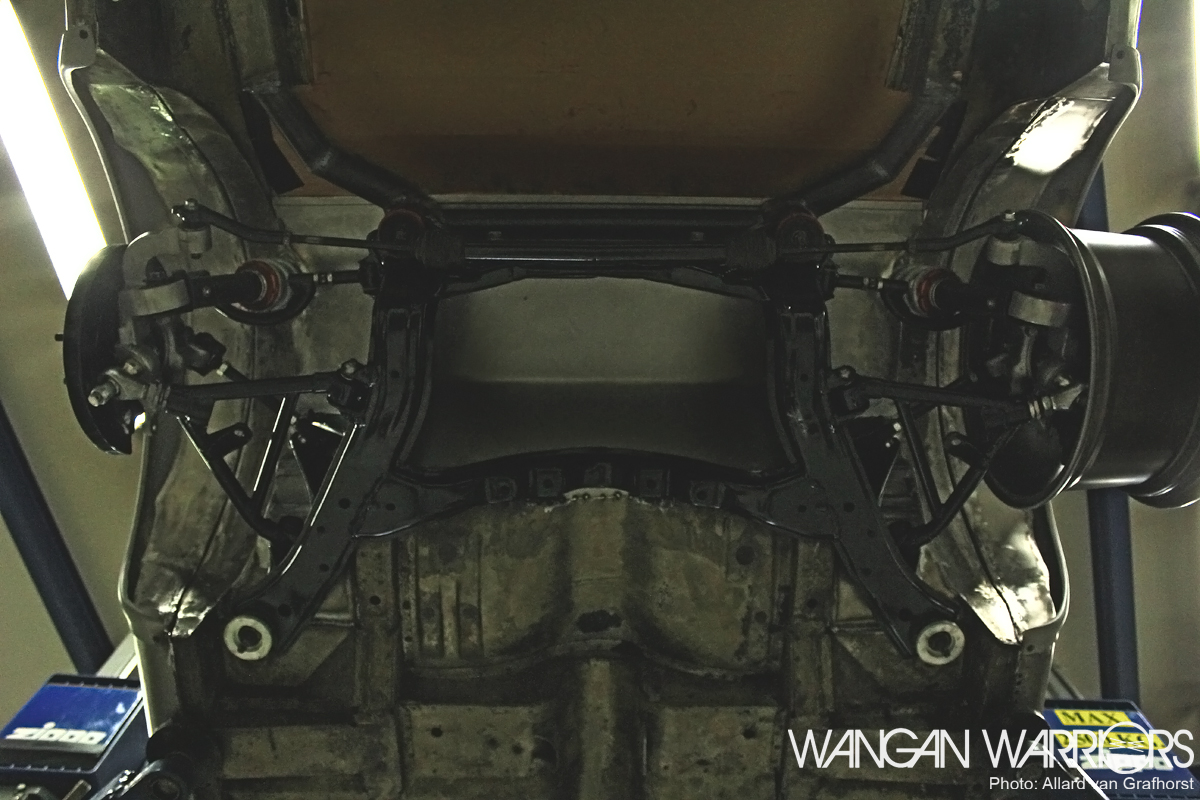 … and that’s exactly what’s going to happen! Instead of placing the KGC-10 body over an existing BNR chassis, the subframes from a BNR32 have been adjusted to fit under the Hako! But the original BNR subframes are too wide and the original rear mounting points on the Hako proved to weak to use. Since there is no strut tower construction some new, stiffer, bigger strut towers are in order as well to makes sure the chassis can handle more power. 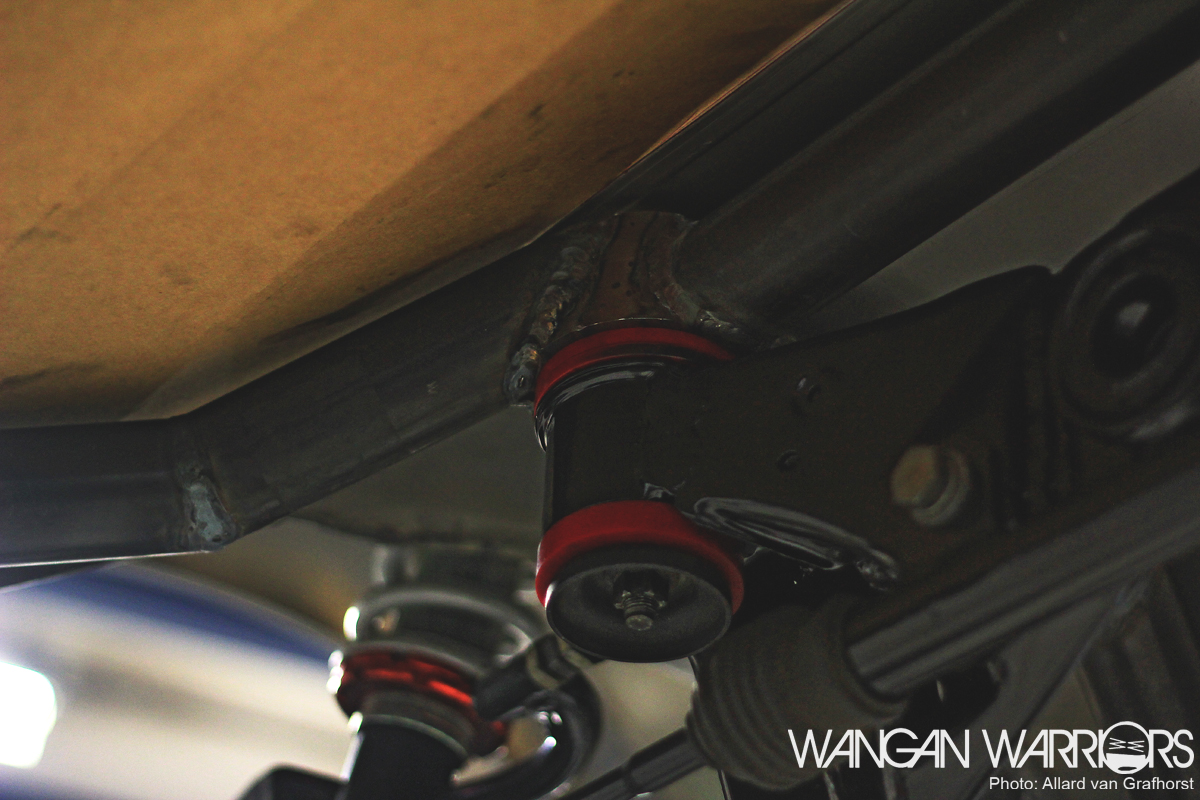 Maarten narrowed a BNR32 subframe by 4 centimeters to make it fit. Another reason why he used the subframe of an R32 is that the mounting points for the wishbones are 1.5 cm higher than on a R33 or R34! Maarten also fabricated new chassis beams so that the complete subframe now sits 5 centimeters higher than the original. 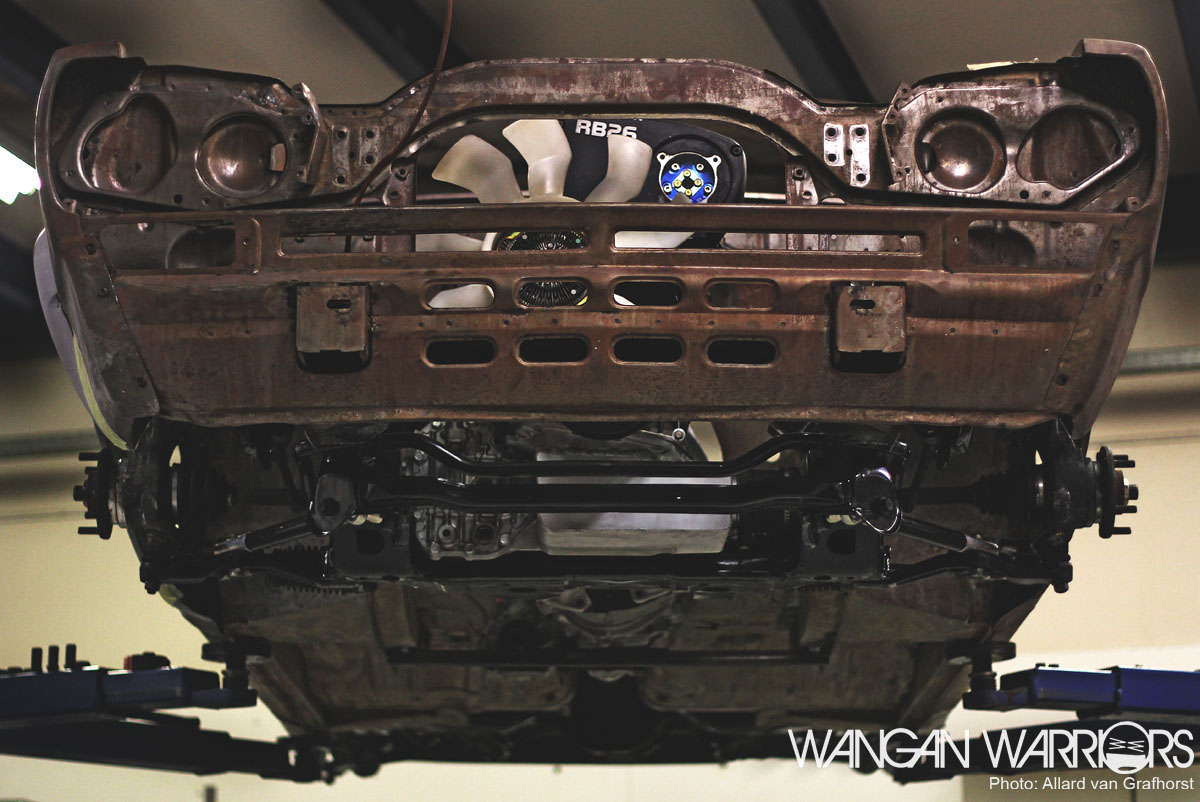 On to the front where the subframe has also been narrowed by four centimetres to achieve the proper fitment. Which in turn means that the swaybar has been shortened as well. 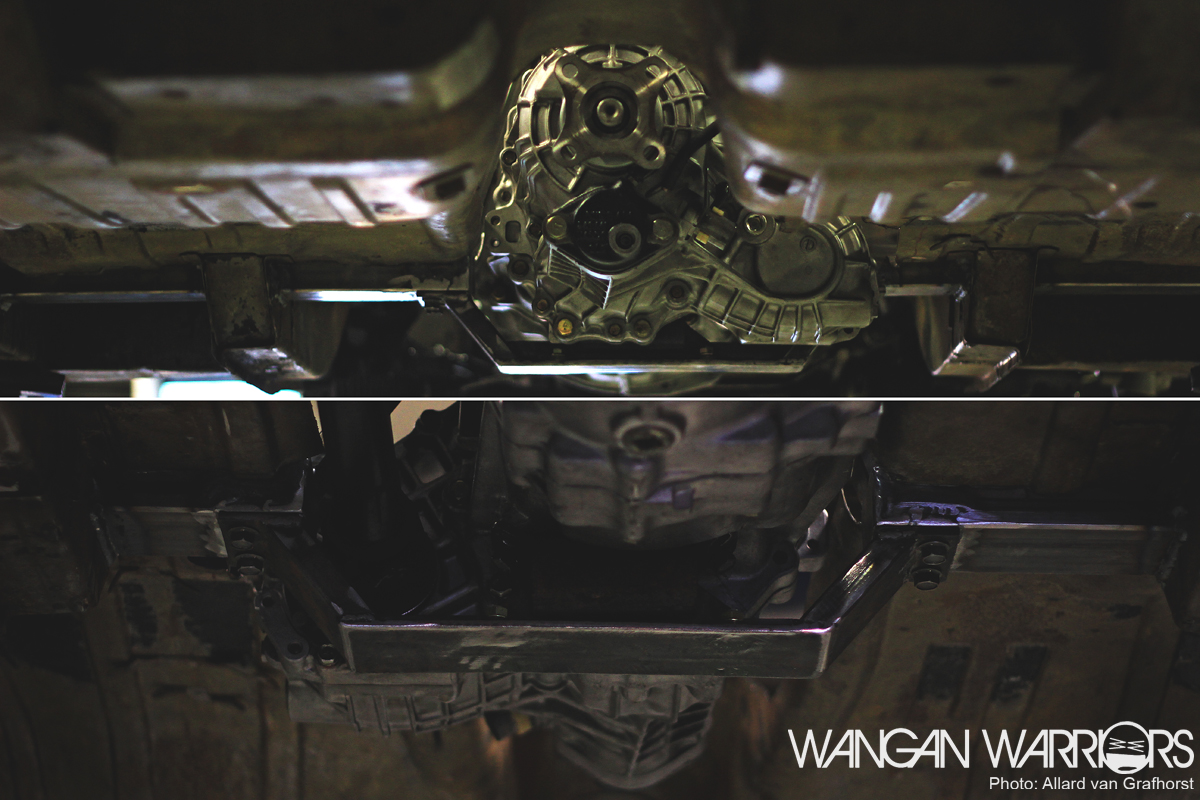 There was another problem whilst achieving 4×4. The front differential of the RB26 sits about 12 centimers too far back. In other words the engine sits too far up front. So Maarten has fabricated a new sump and placed the diff 12 centimetres forward.
Maarten also needed to fabricate a new reinforced baseplate… 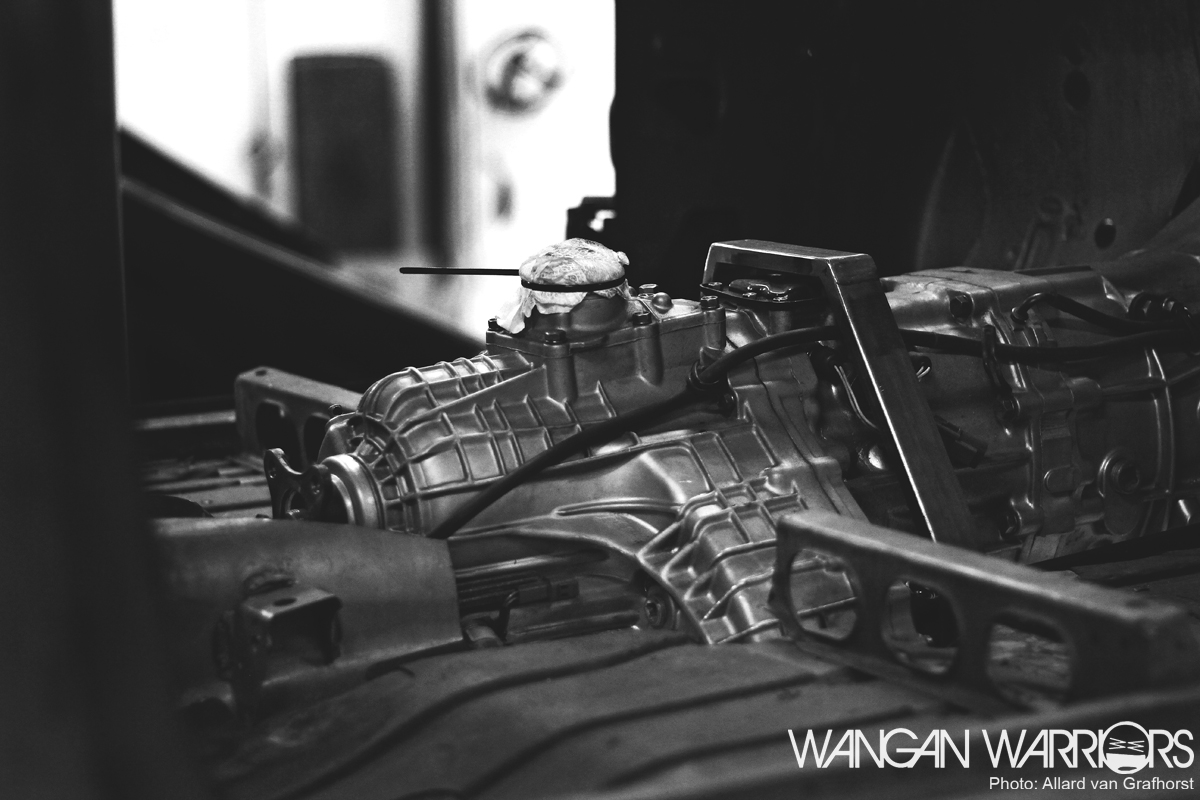 … and gearbox mount because the new gearbox is a lot bigger and heavier than the original L20 unit. 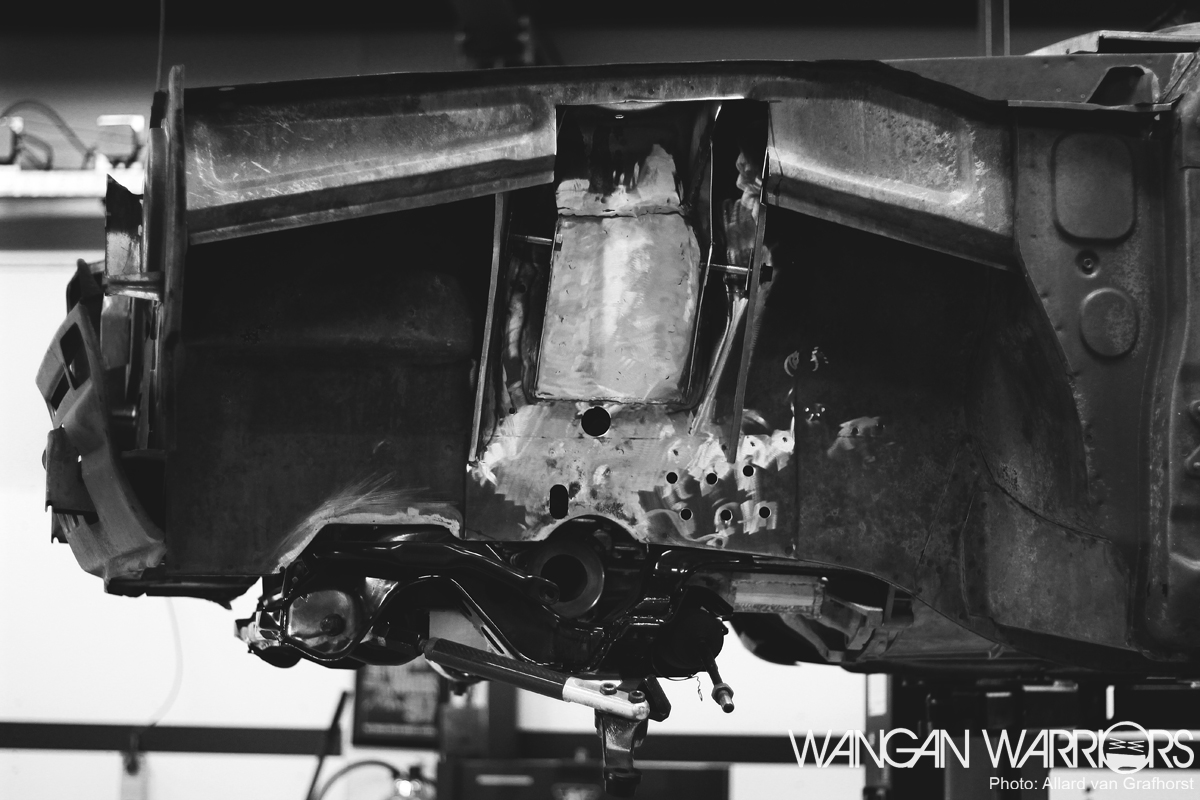 The front chassis beams and struts have been reinforced whilst as you can see, new support points have been fabricated to benefit the R33 upper wishbones… 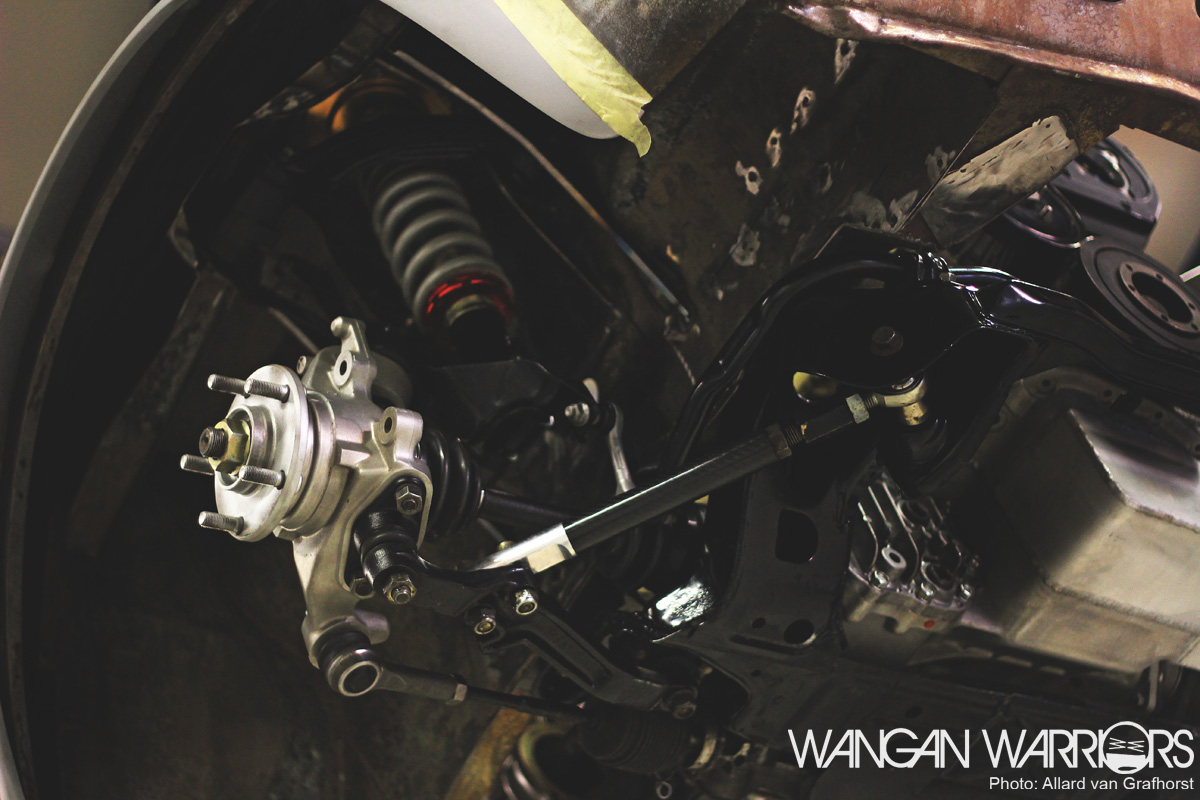 … whilst the lower units have been lengthened a little. It goes without saying that the car’s geometry has to be set up correctly! 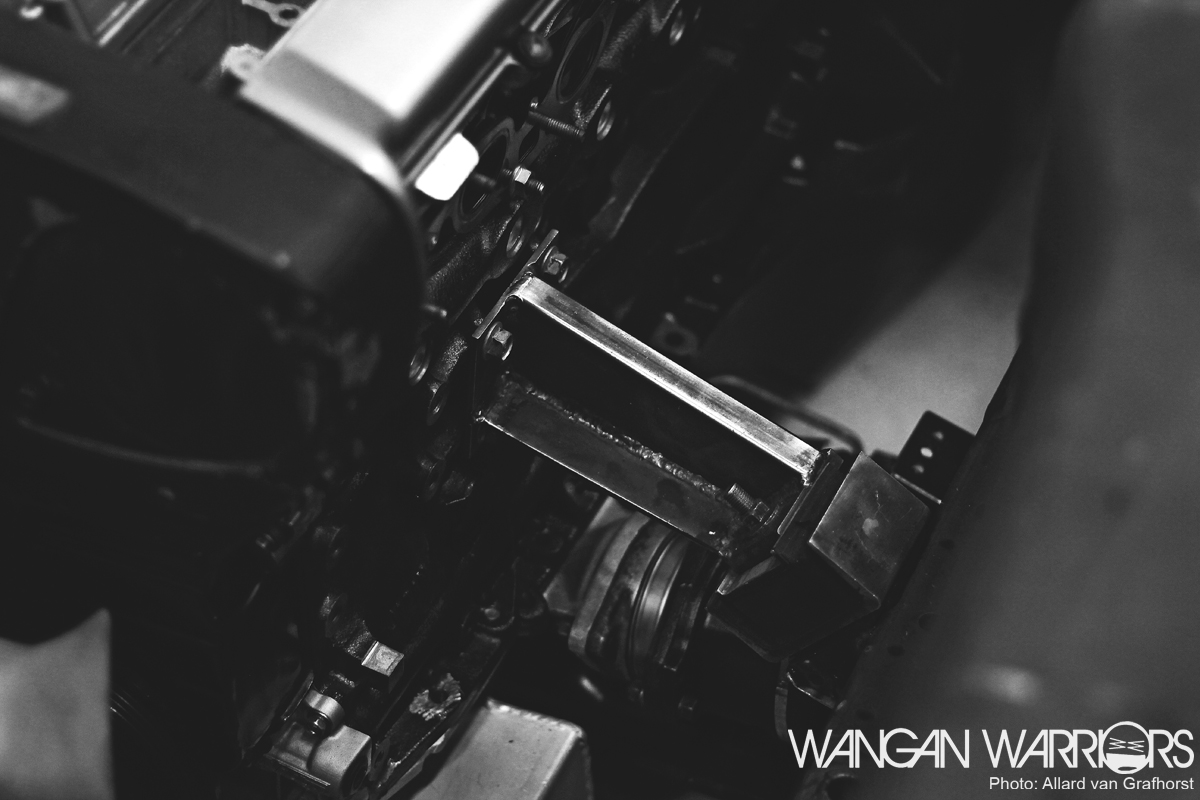 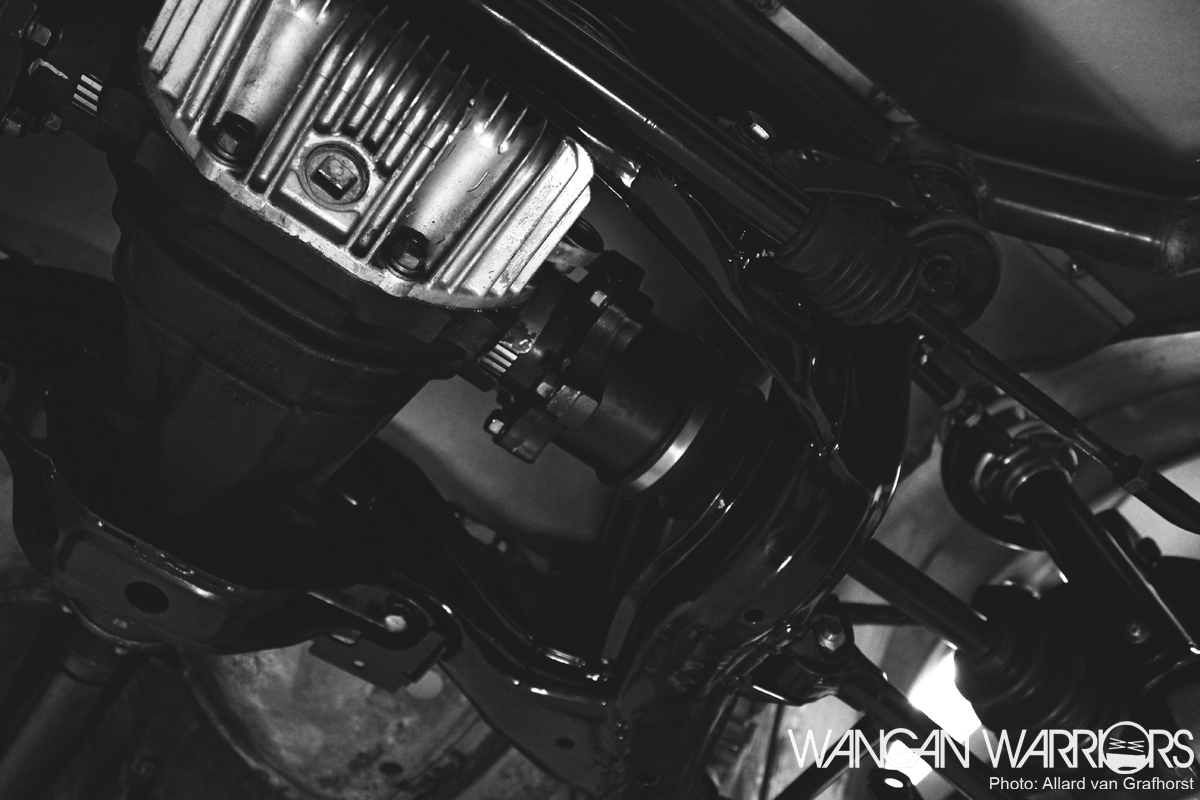 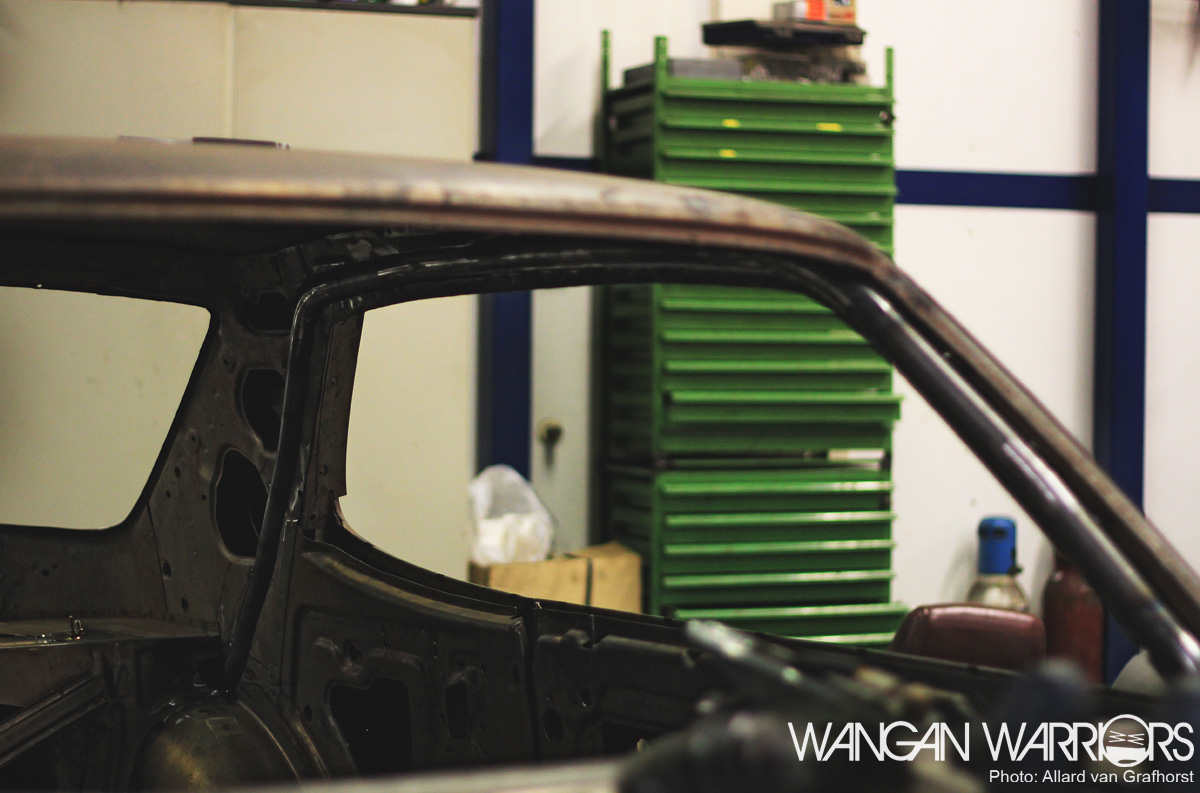 … and a completely tucked rollcage! As I mentioned in the beginning of this article the whole purpose of this build is that it needs have that original, “out of the factory” look so you won’t even know it’s there once the interior is refitted! 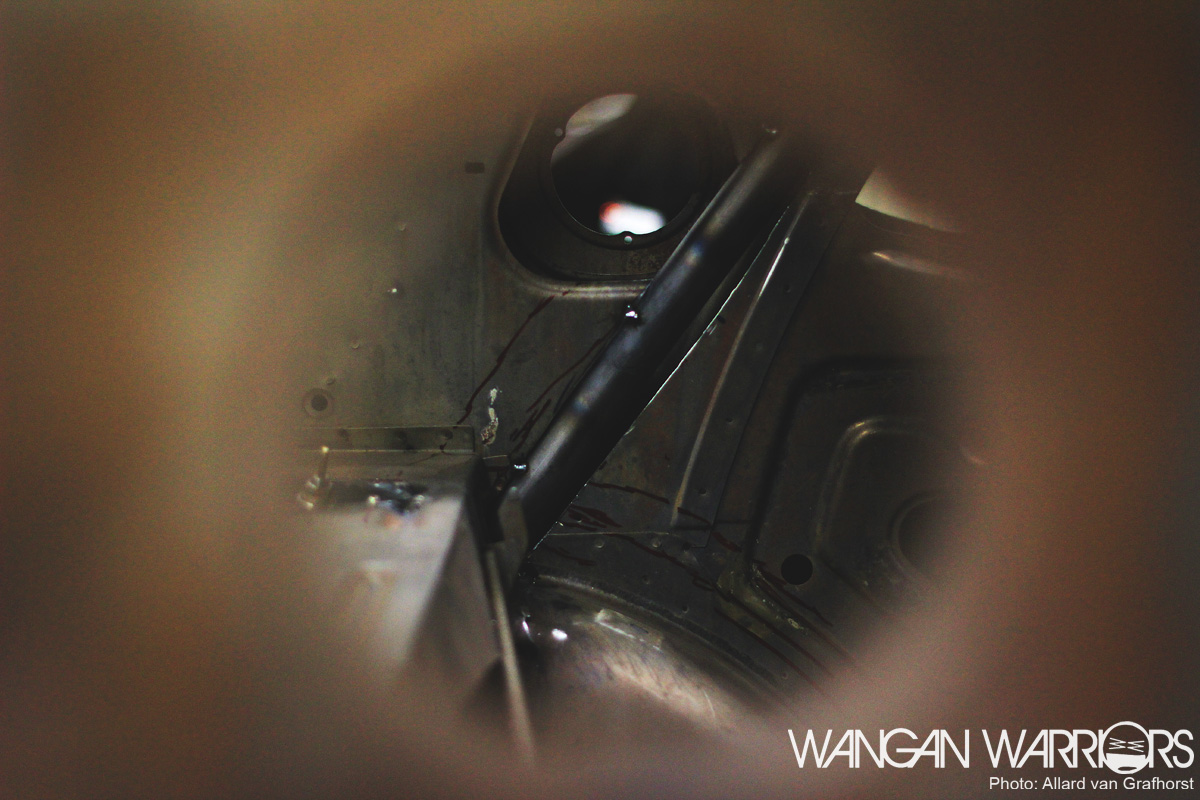 In most cases the main function of a rollcage is both safety and rigidity, but in this case it’s purely to minimise body torsion under heavy acceleration, cornering and braking. 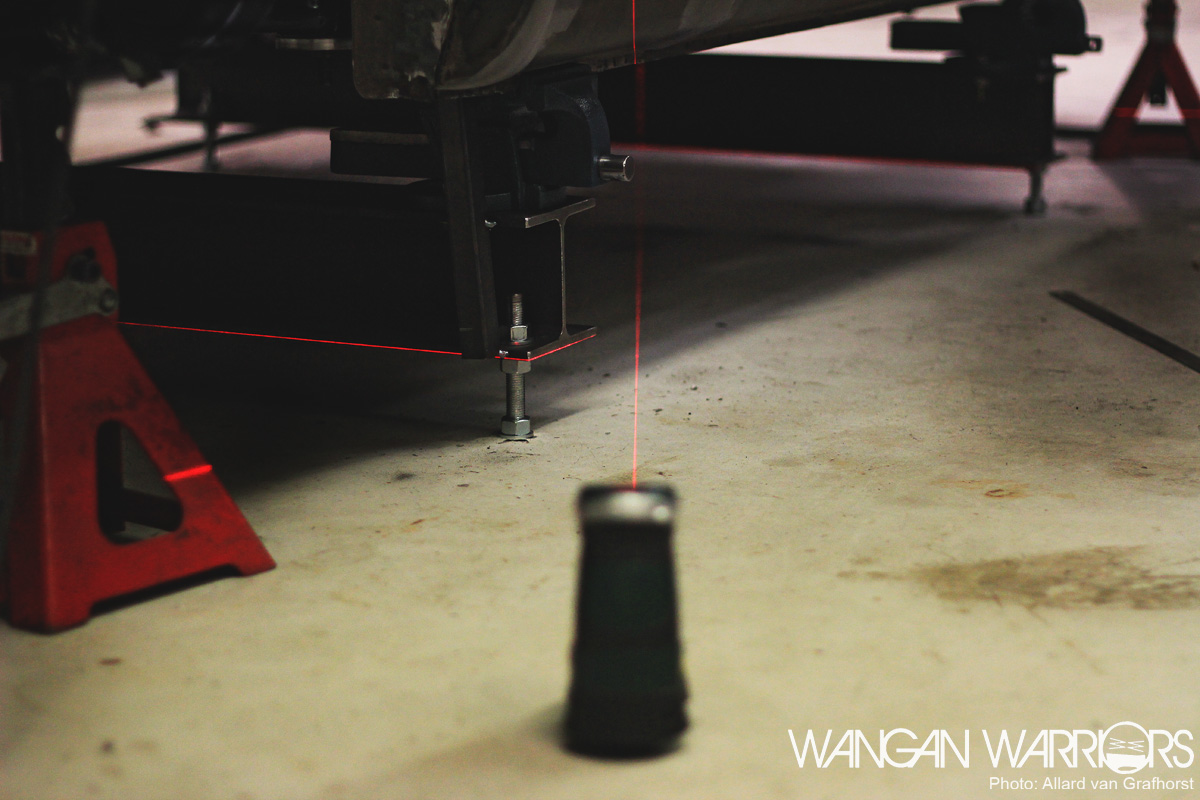 To make sure the cage is placed in a completely aligned chassis, Maarten has placed the complete car on two steel H-beams to rule out any flexing and aligned it accordingly! 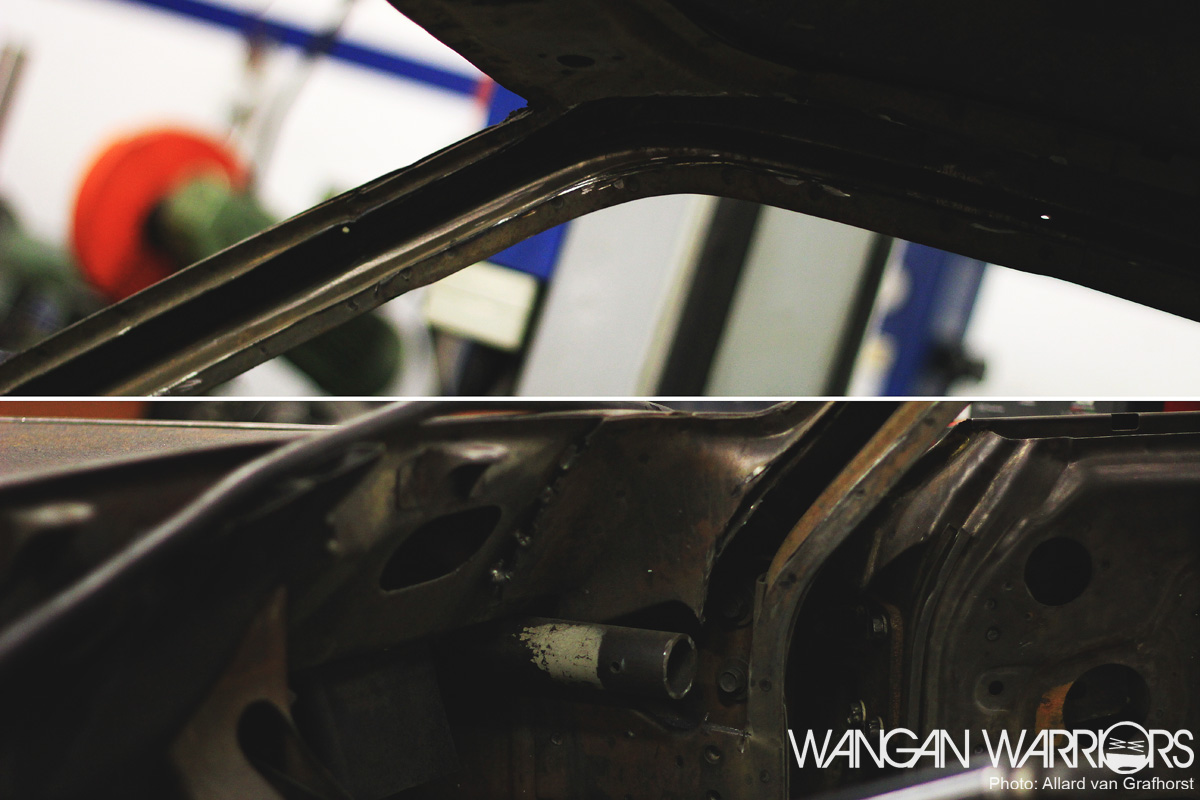 One side is done but as you can see here, Maarten cut out the original parts of the body to make sure that the cage is as tucked into the chassis as possible! 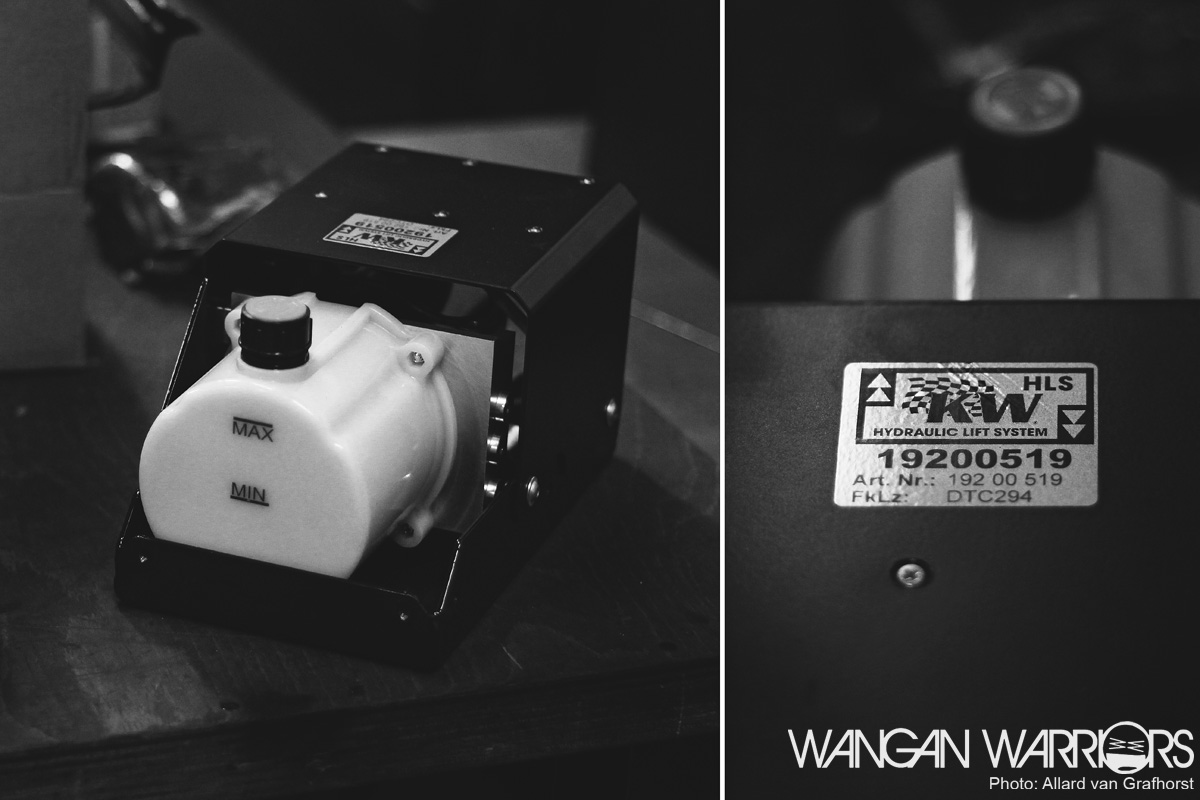 Another cool feature is the KW Hydraulic Lift set or “HLS”. This enables the driver to raise the car 5 centimetres from the inside to tackle even the biggest speedbumps! 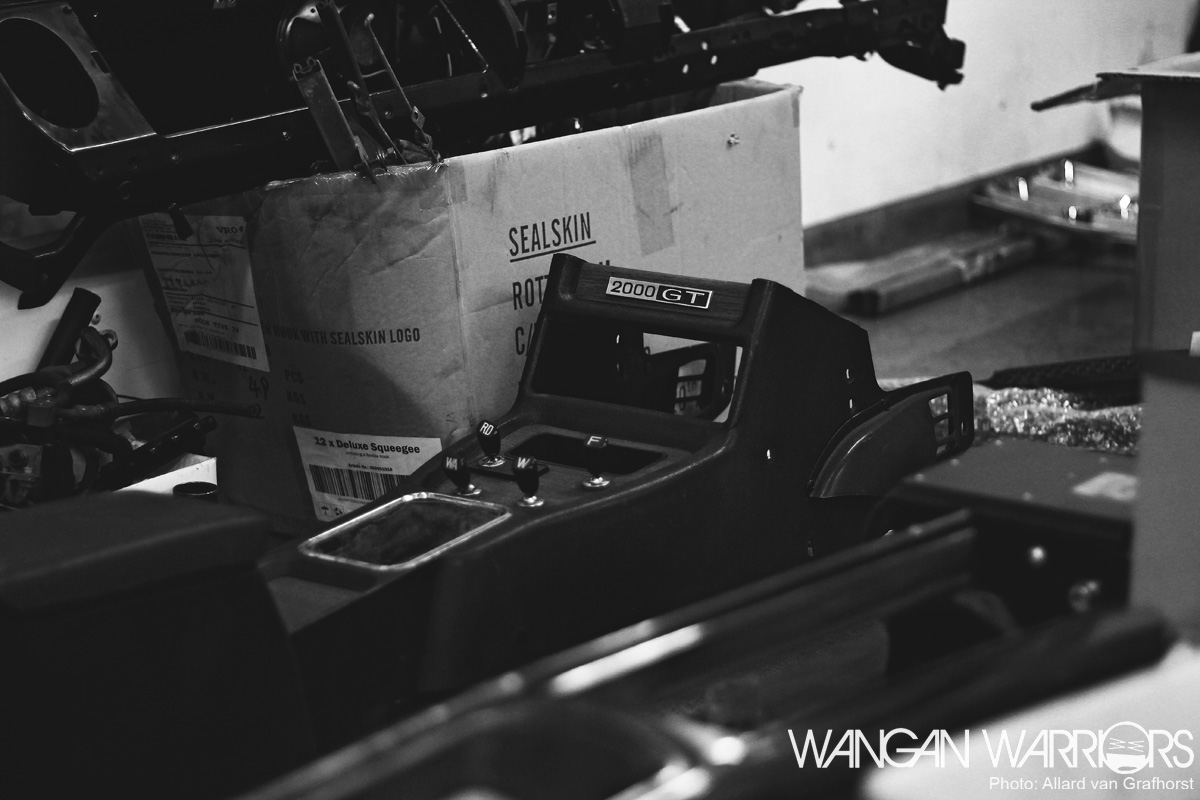 The interior will retain its stock appearance and any upgrades will be period correct.
Anything modern will be tucked away for, again, that ultimate factory look and feel! 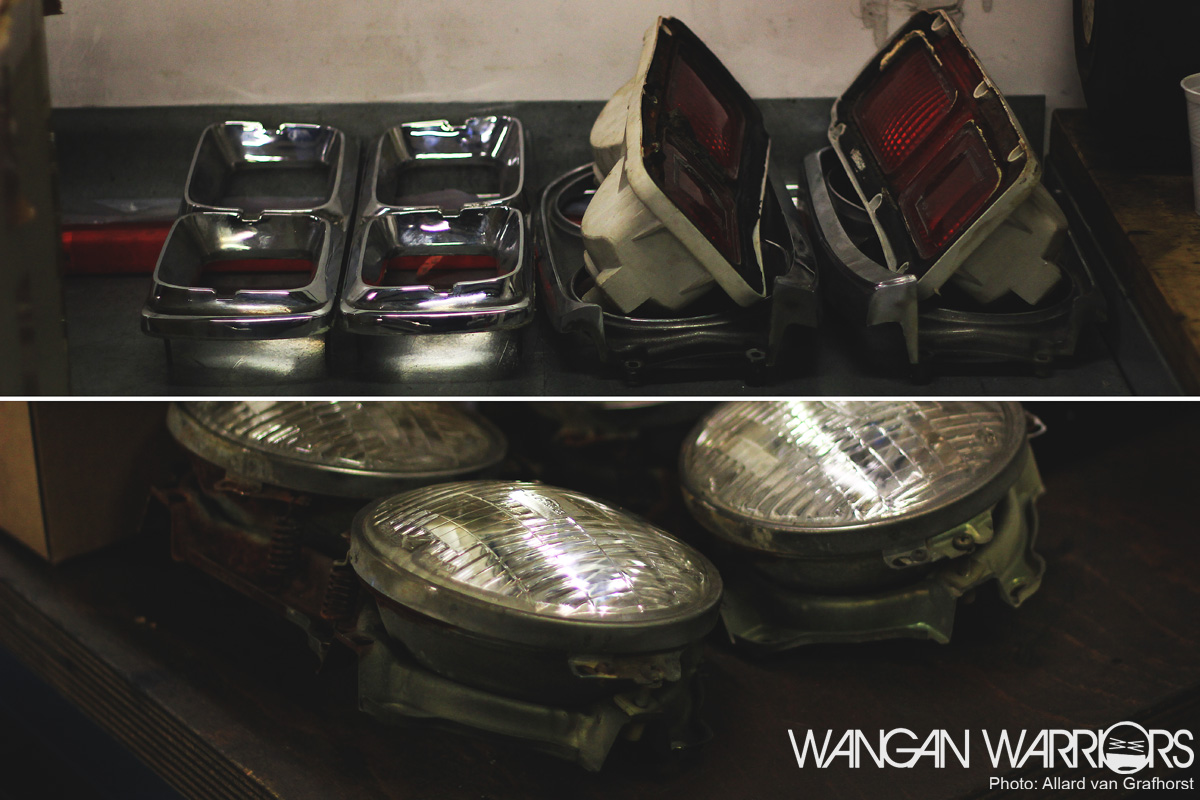 All the original exterior parts like the lights will be refurbished… 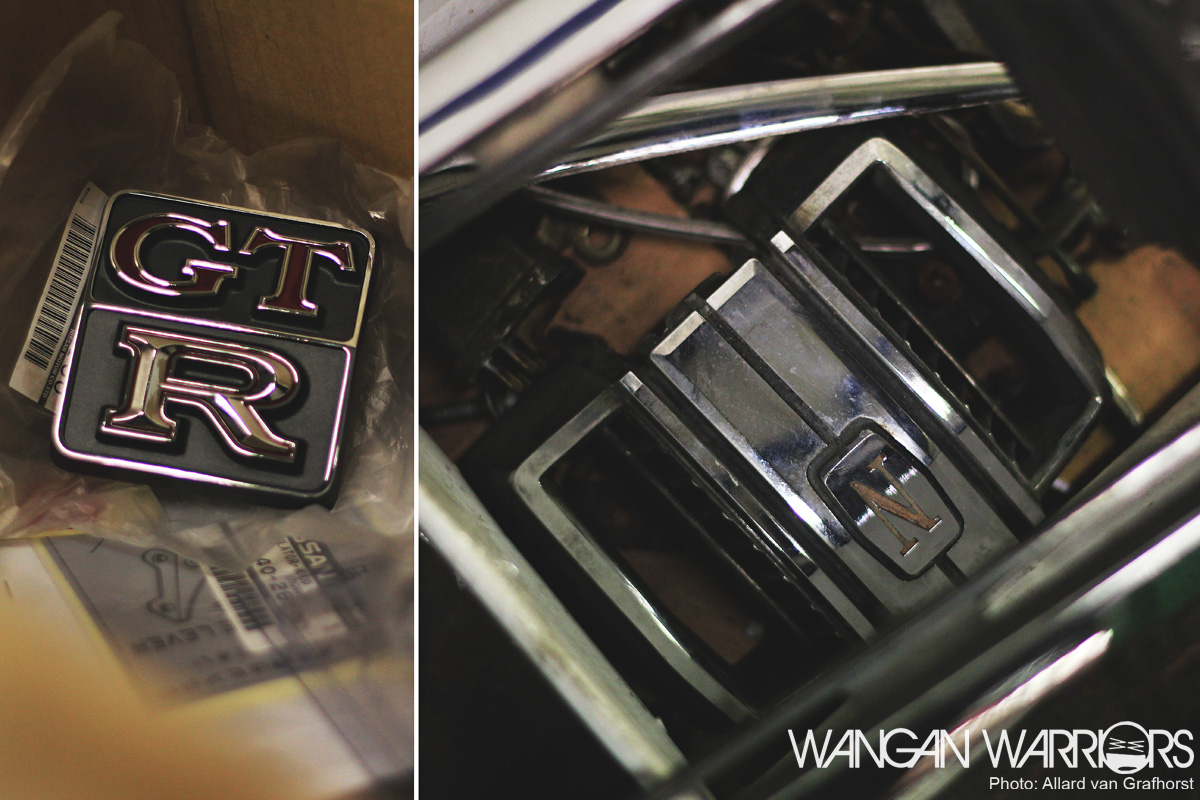 … or even replaced with original OEM products! Yes, that’s an original Nissan GT-R badge you see there! The owner has spared no expense so far… 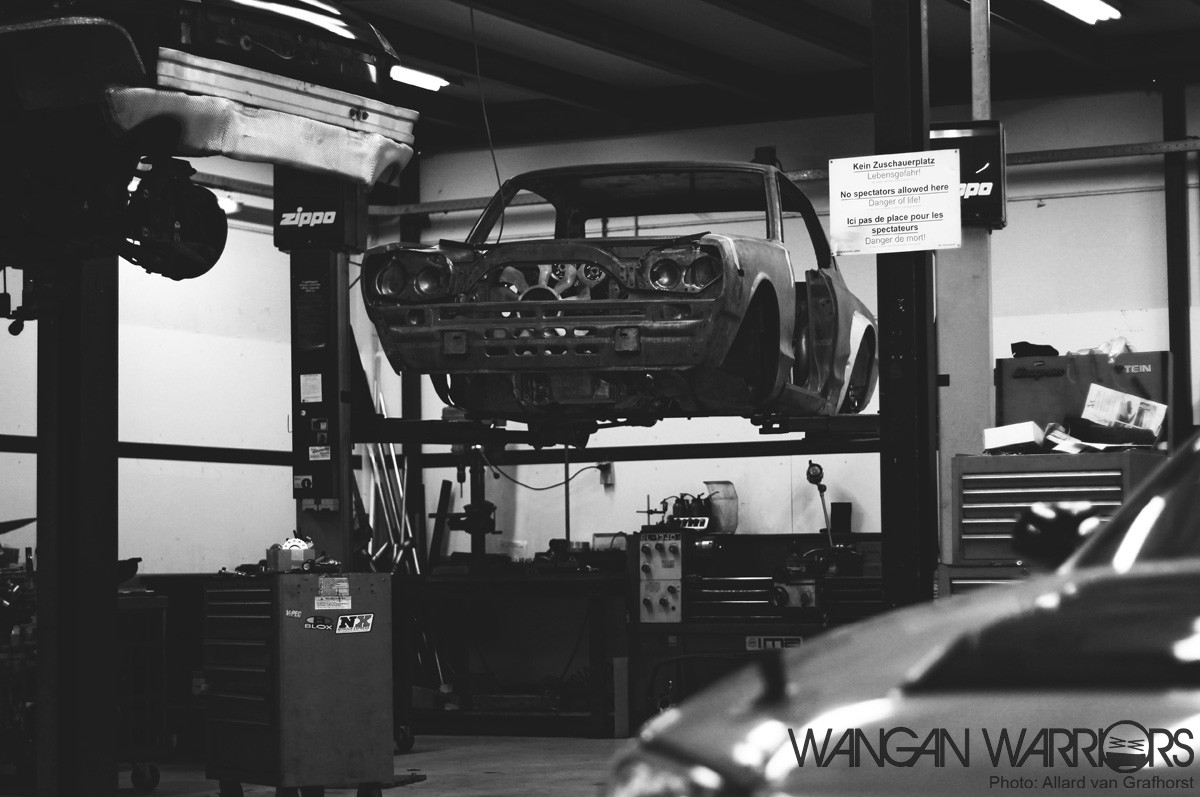 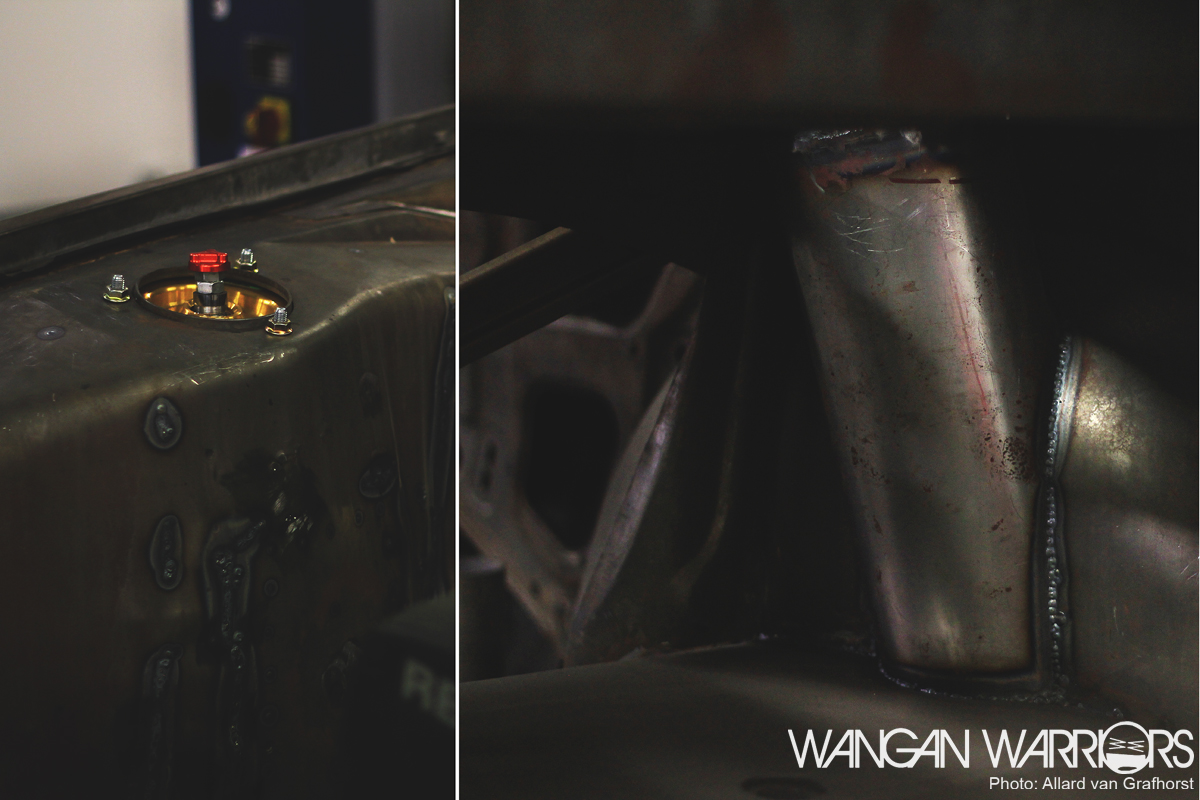 So the car is a long way from beeing finished… 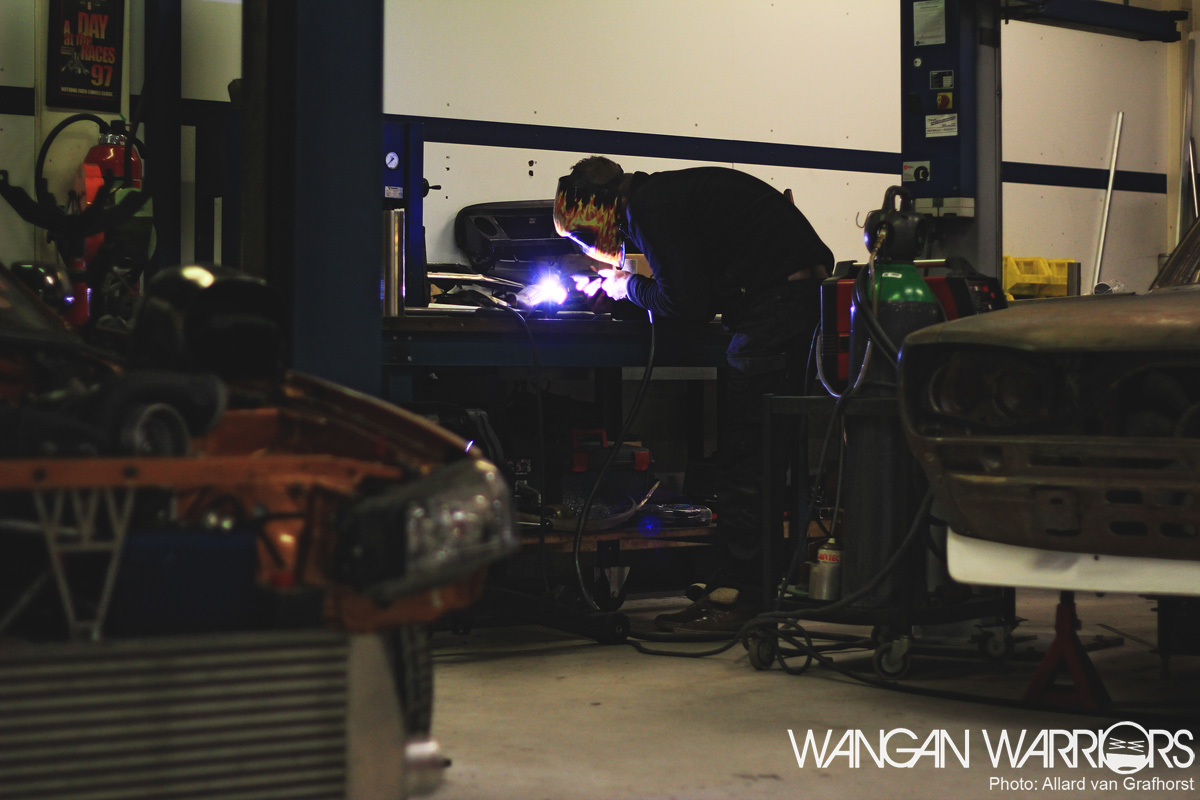 … but make sure to have a look out on our FB page for more updates as I’ll keep a close eye on what has to be the most epic classic JDM restomod this side of the planet! 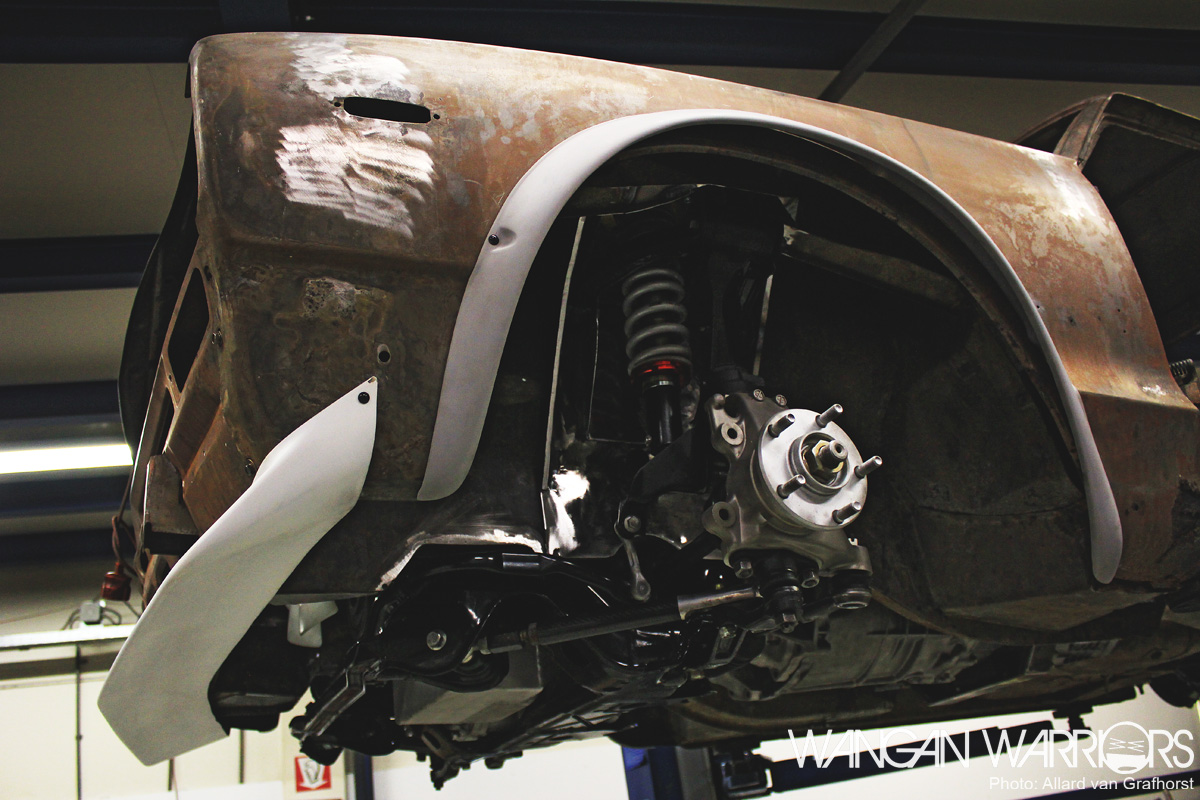 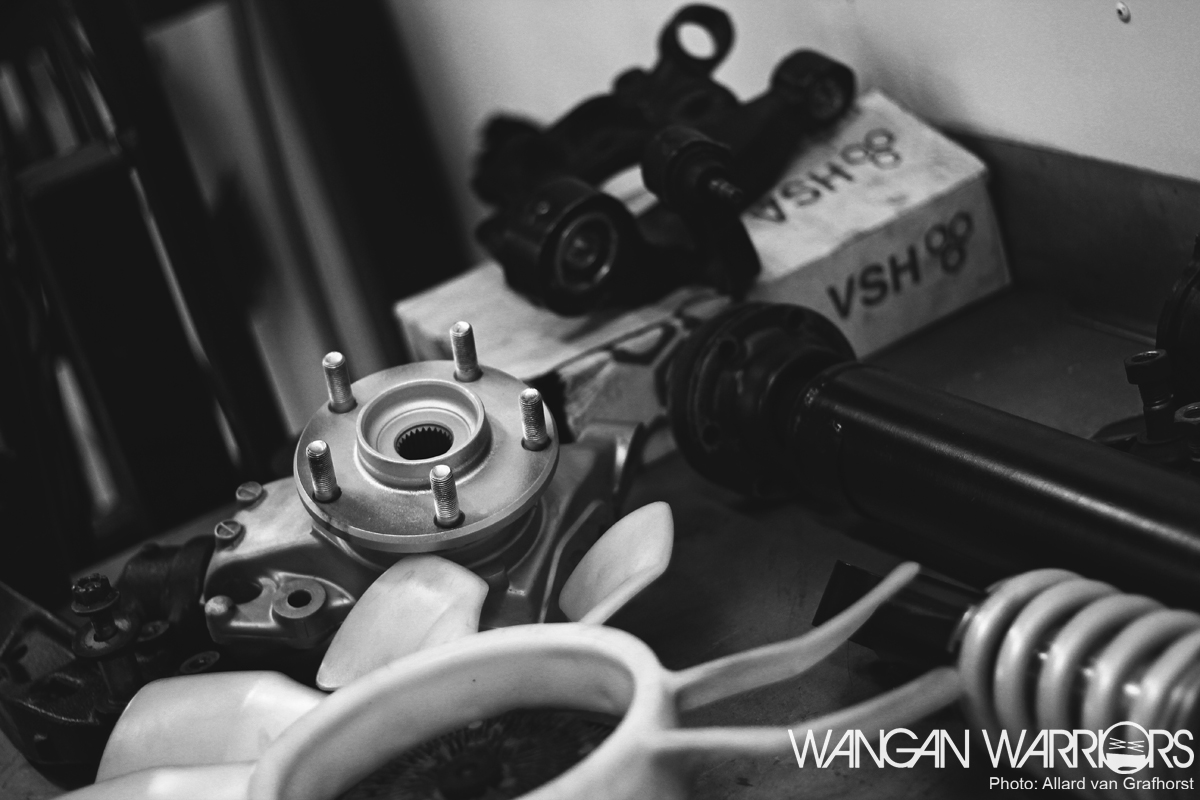 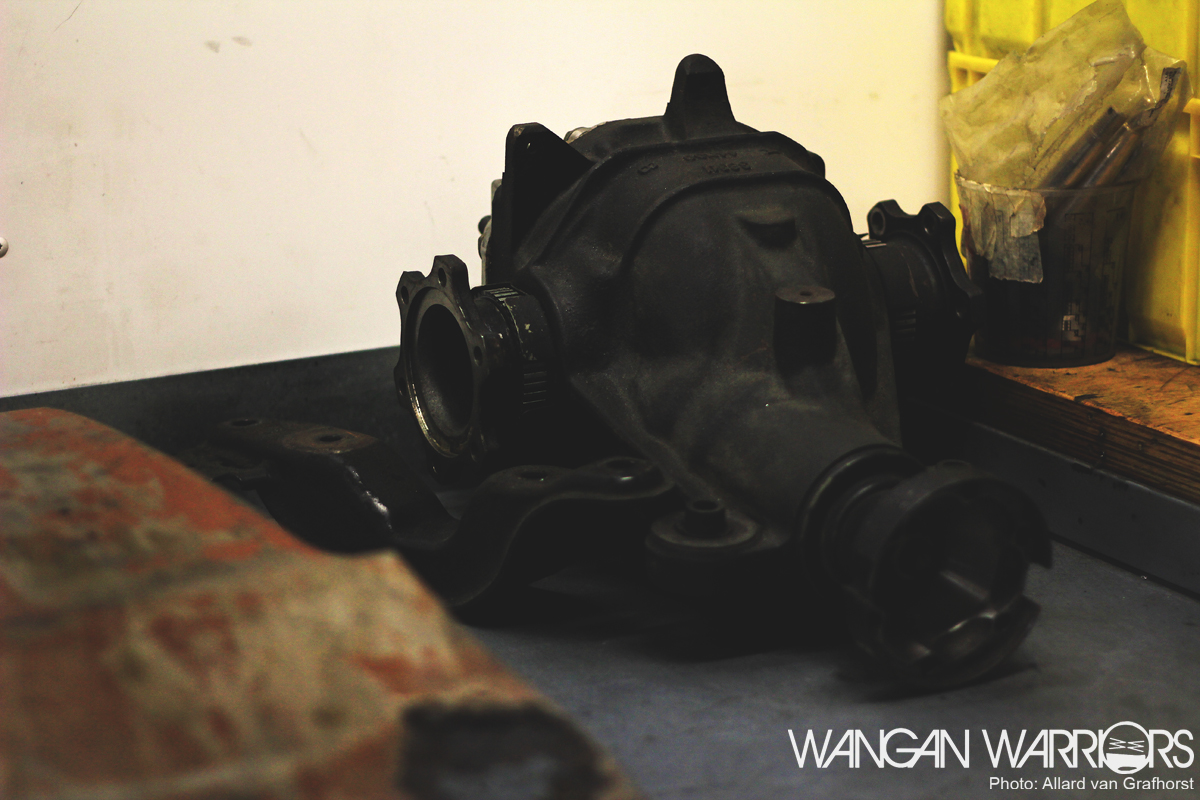 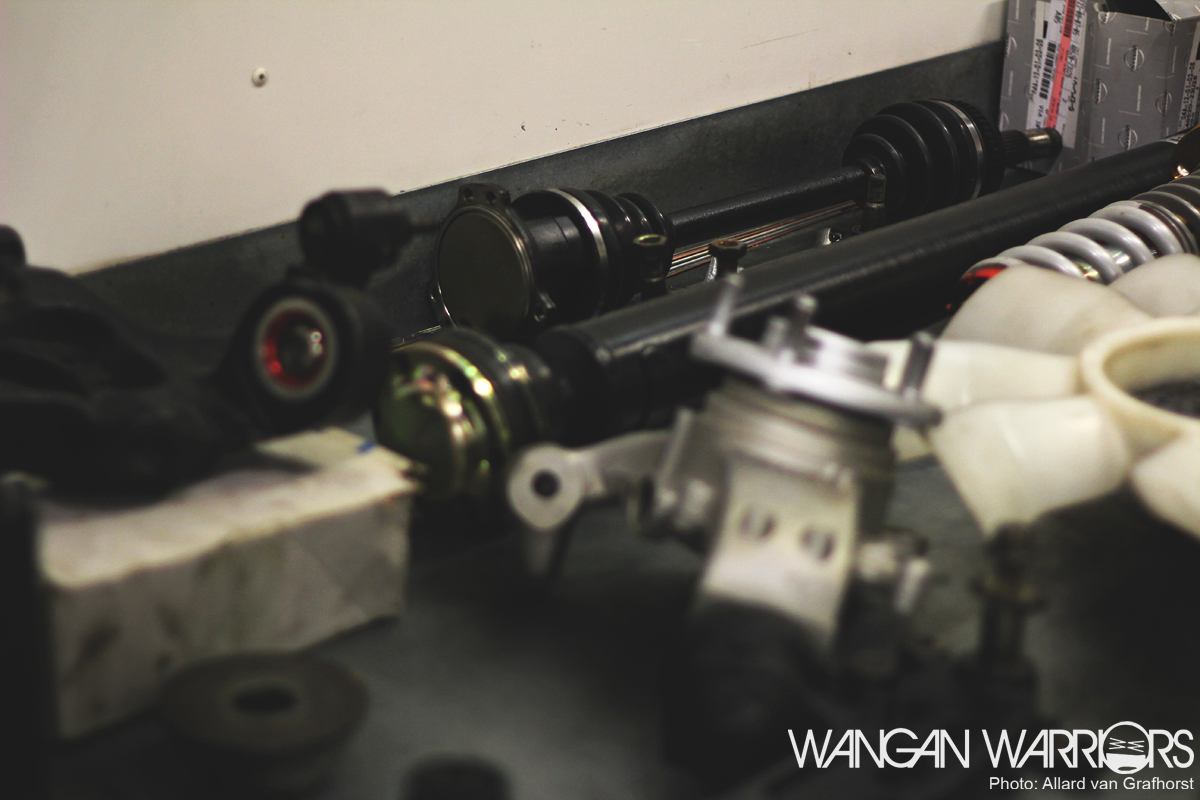 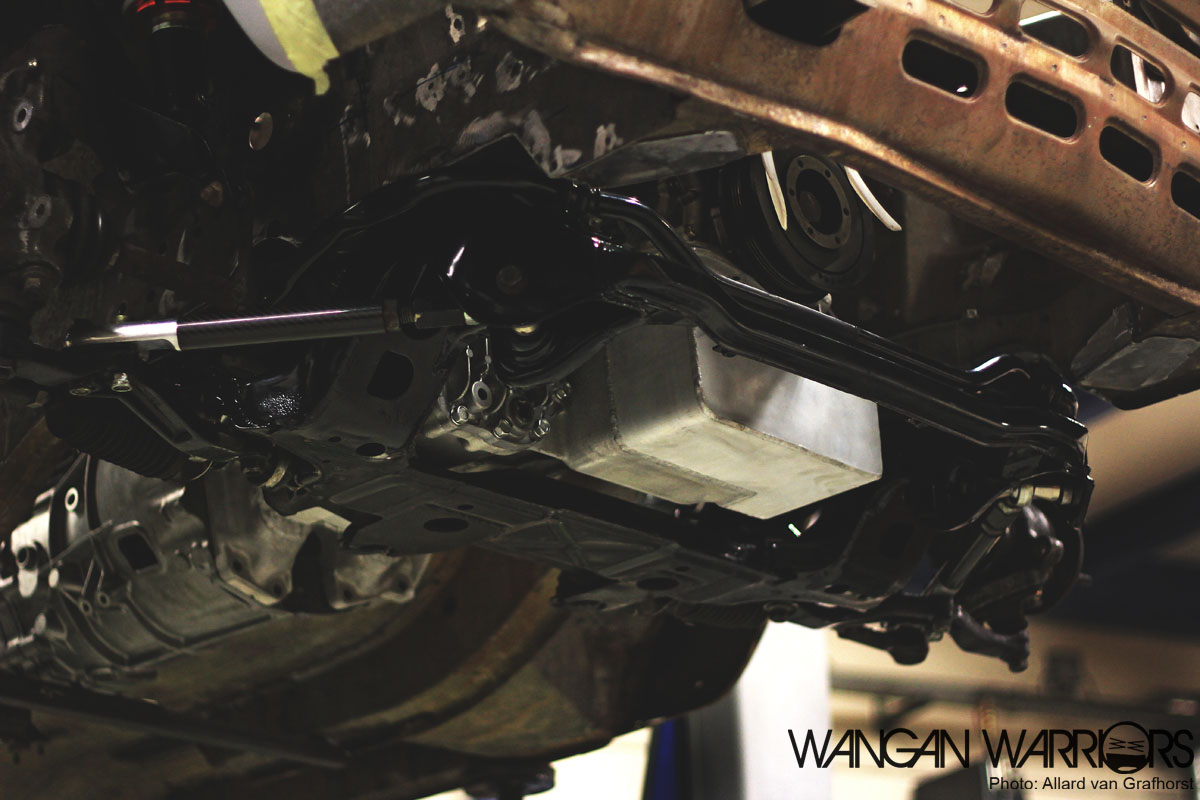