Hi everybody, all the best wishes for the new year! What you are about to read next is my guestblog for Wangan Warriors. My name is Mathieu van den Oever and I’m a former skateboarder who, due to his injuries, replaced one addiction on four wheels for another. As part of my love for cars and racing in general I picked up photography and slowly started to create some videos on the side to capture the automotive lifestyle. When I’m not behind the camera you can find me messing around with my Mazda Miata racecar or rebuilding an old GoKart which I recently purchased with my brother. 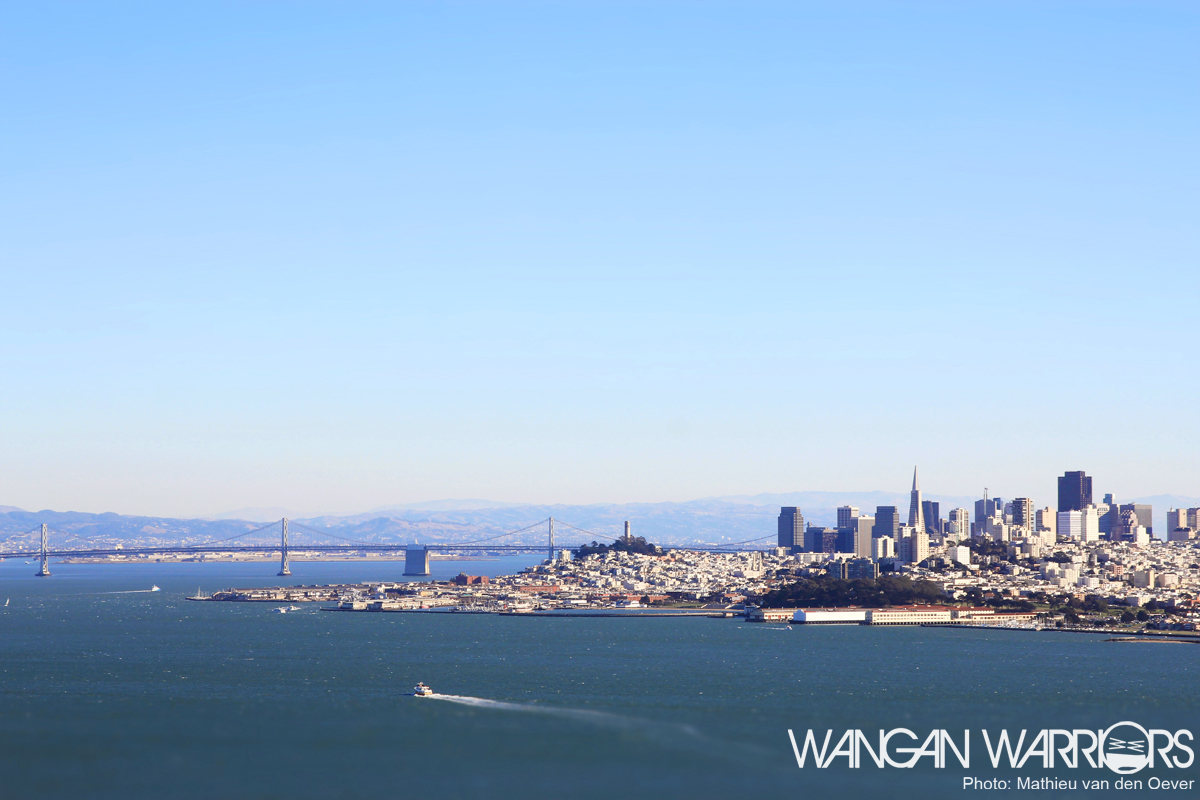 It was back in July, during the Mazda MaX5 Cup races at Zolder, that I first heard about the adventure that I’m about to tell you. Mick Hoogwerf, founder of the Dutch MaX5 Racing series and a great endurance fan, had the idea to participate in the 25 hour race of Thunderhill in California. Together with MaX5 Racing frontrunners David Koh and Bart Wubben he hired a Miata and before I knew it I was part of the project called the Dutch American Racing Team. With the awesome support of MX-5 specialist I.L. Motorsport in Germany, I was able to join the team in San Francisco early December, where we kicked off our racing roadtrip. 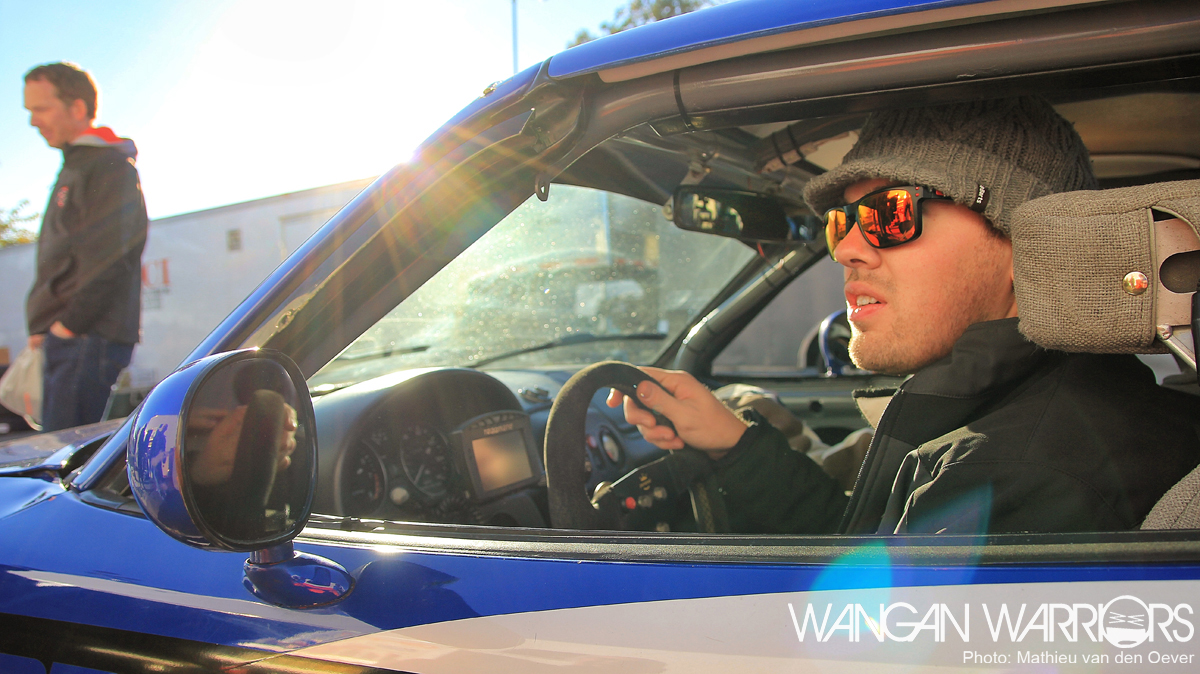 After a three hour trip through Napa Valley and a brief stop at Sonoma Raceway we arrived at Thunderhill. We met up with the teams of Spare Parts Racing and Gas Head Motorworks which supplied our car and would be handling our pitstops during the race. It did not take long before we were jumping in and out of the car as kids in a candy store. Little did we know of what the race had in store for us…. 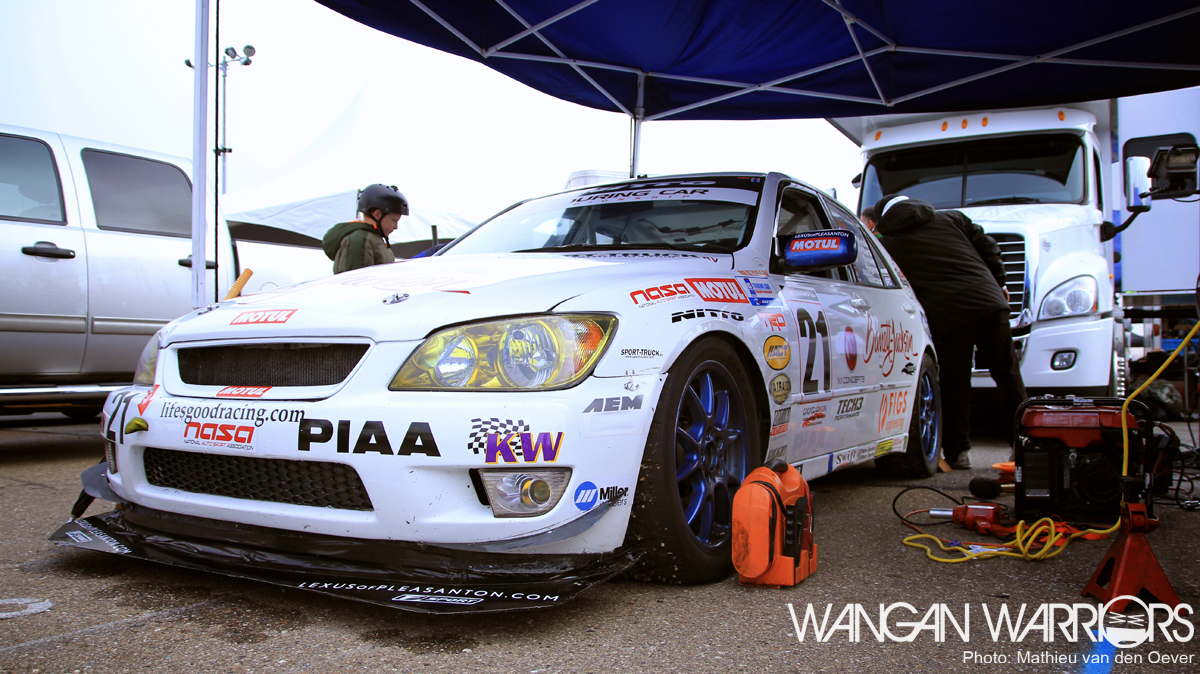 After a big American dinner and a good nights rest in the town of Willows we headed back to the track. Today was the testday. The guys needed this day of practice to get to know the track, to set up the car and to practice pitstops with the team. While they were working hard on perfecting these skills, I started to make myself familiar with our competition. Altough I had not seen the car in the actual race, this Lexus looked more than capable to participate. 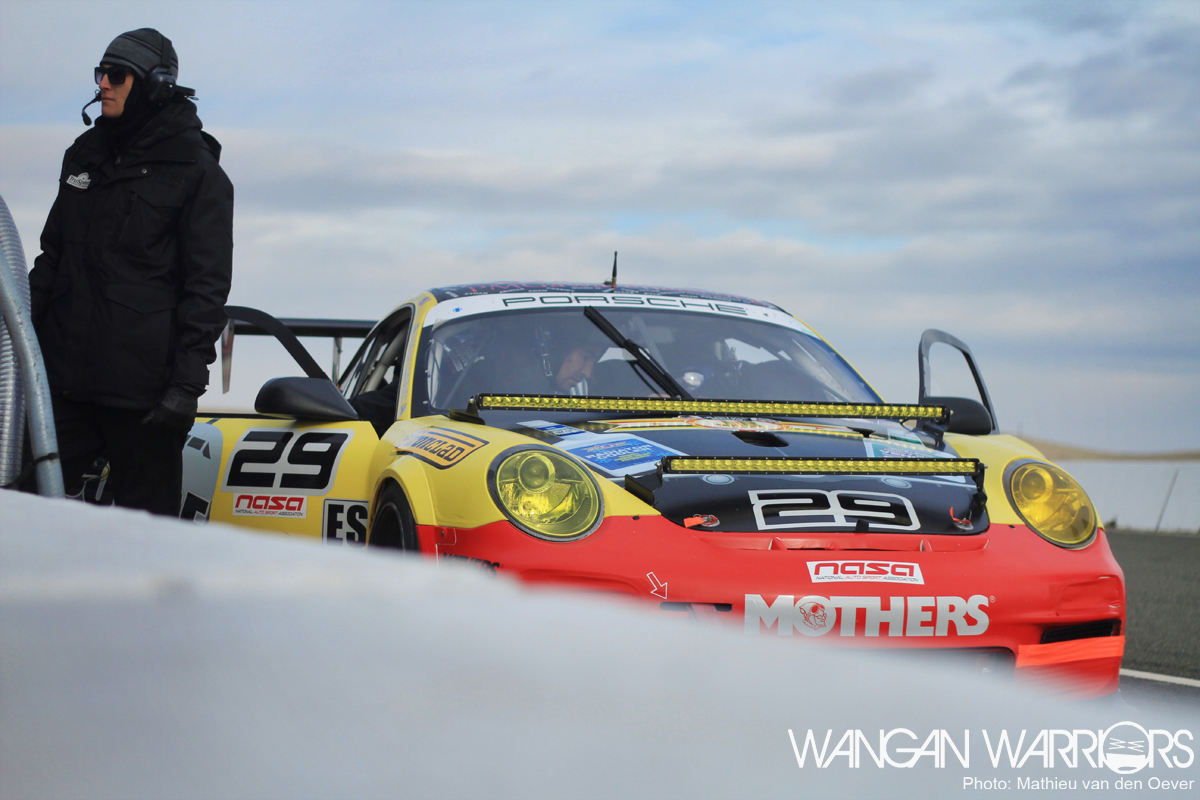 Cars ranged from full blown Porsche racers, Audi R8’s, prototypes and plenty of other super fast machinery that would join us on track. To keep things fair, the cars were divided among six different classes during the race. So besides the overall win, teams could also battle for class honors. Due to it’s ultra bright led lighting, the organisation nicknamed this particular Porsche “The Sun” as it was even blinding race control up on the third floor of their tower. 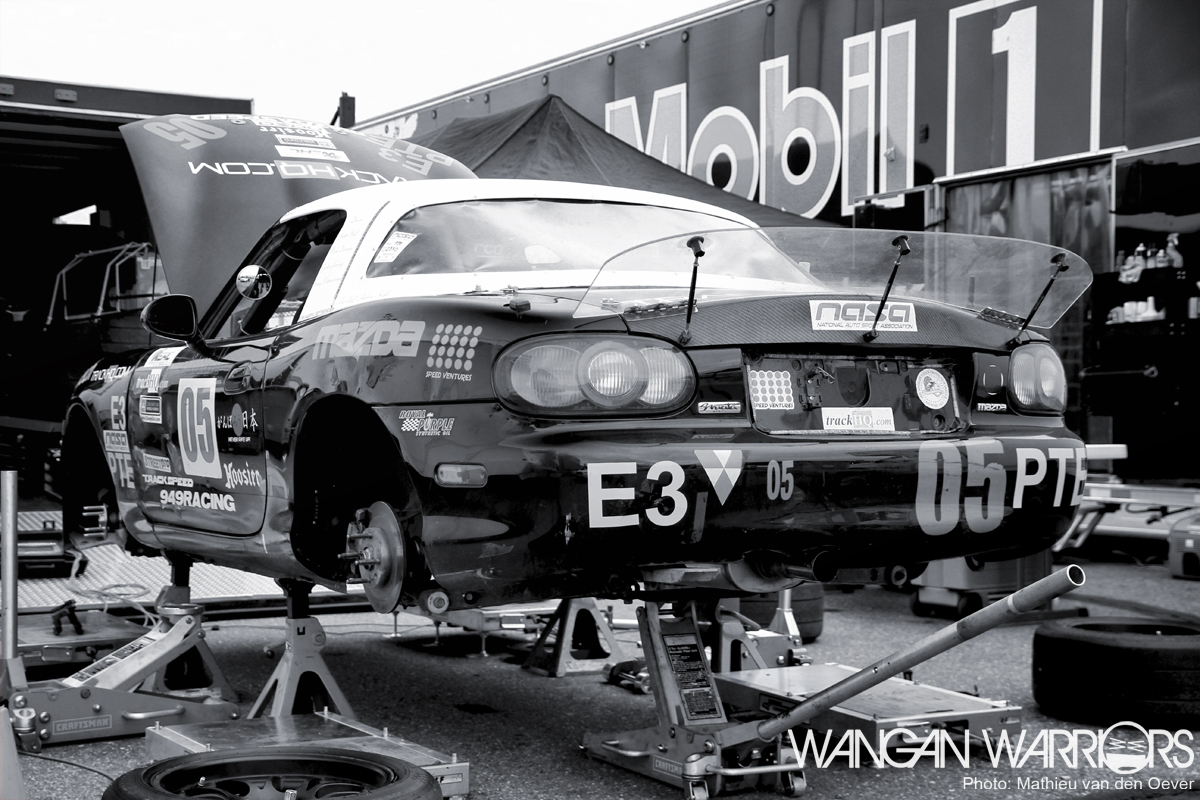 Our team was running in the highly competitive E3 class and the top favourite for the win was this NB Miata from 949 Racing. The 949 team collected wins at the Thunderhill 25 hours during 2011 and 2012 and are known for their mighty Miata modifications. 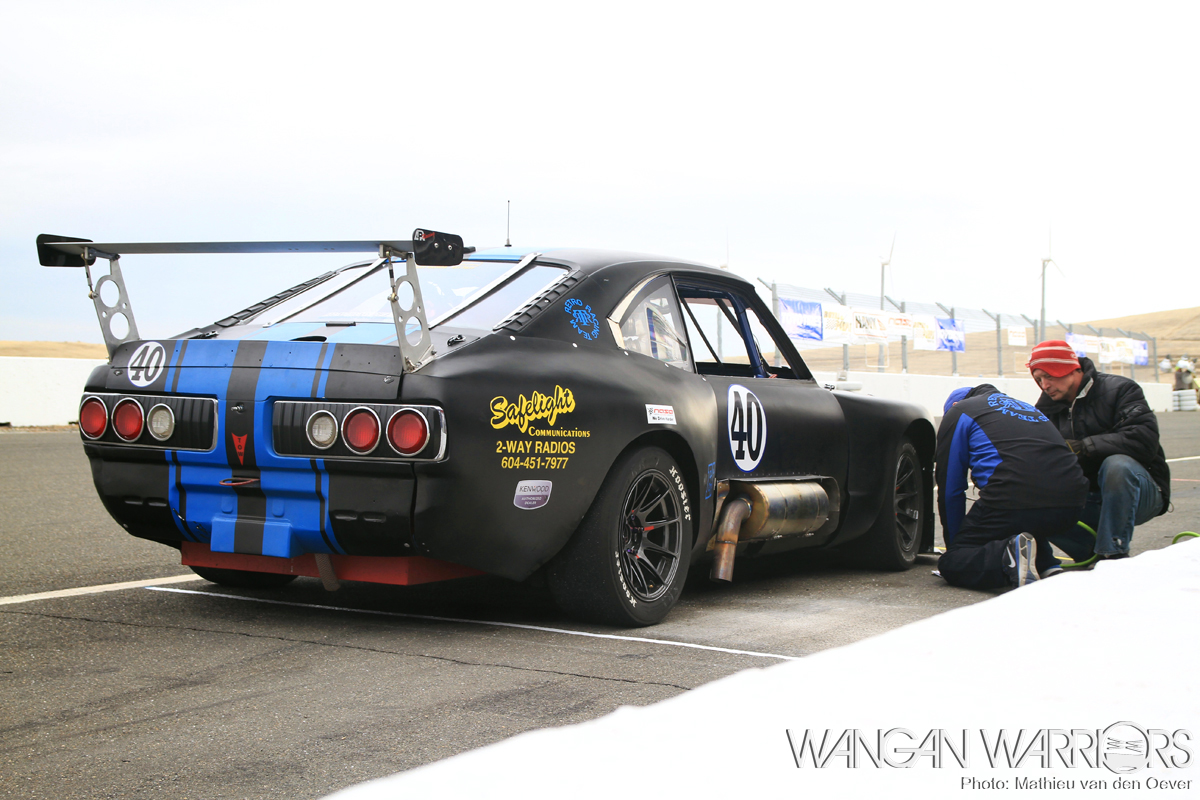 By far my favourite car of the event was this Mazda RX3. I have great respect for the Retro Racing Team for bringing this classic racer to the 25 hour race and to see it fight with its much younger rivals. Besides the looks of this Mazda, the sound of the 12A Rotary engine was even more menacing. 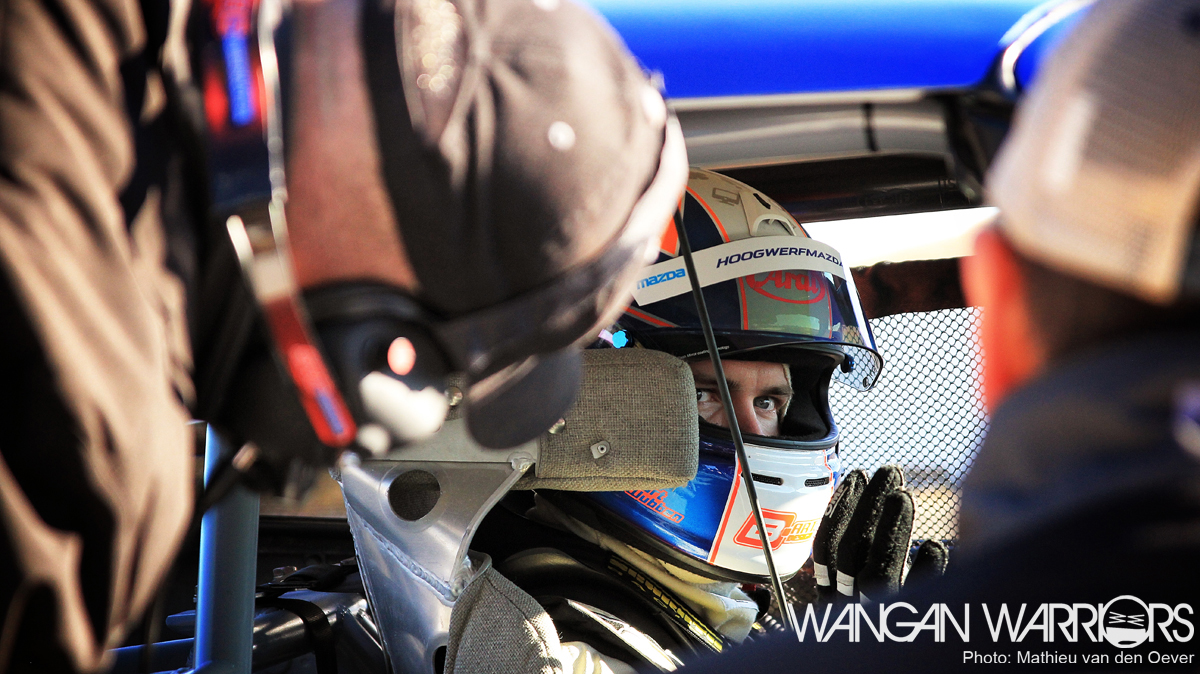 Back in pitlane Bart was supplying the team with feedback on the cars behaviour. He would be the lead driver for the Friday night qualifying session and he wanted to ensure that the handling was close to perfect. Bart did not want to worry about the set up during his fast laps. As qualifying was driven in the dark, he would need all his attention to focus on the track as he had never raced in darkness before. Besides, both the track and the car were new to him as well. 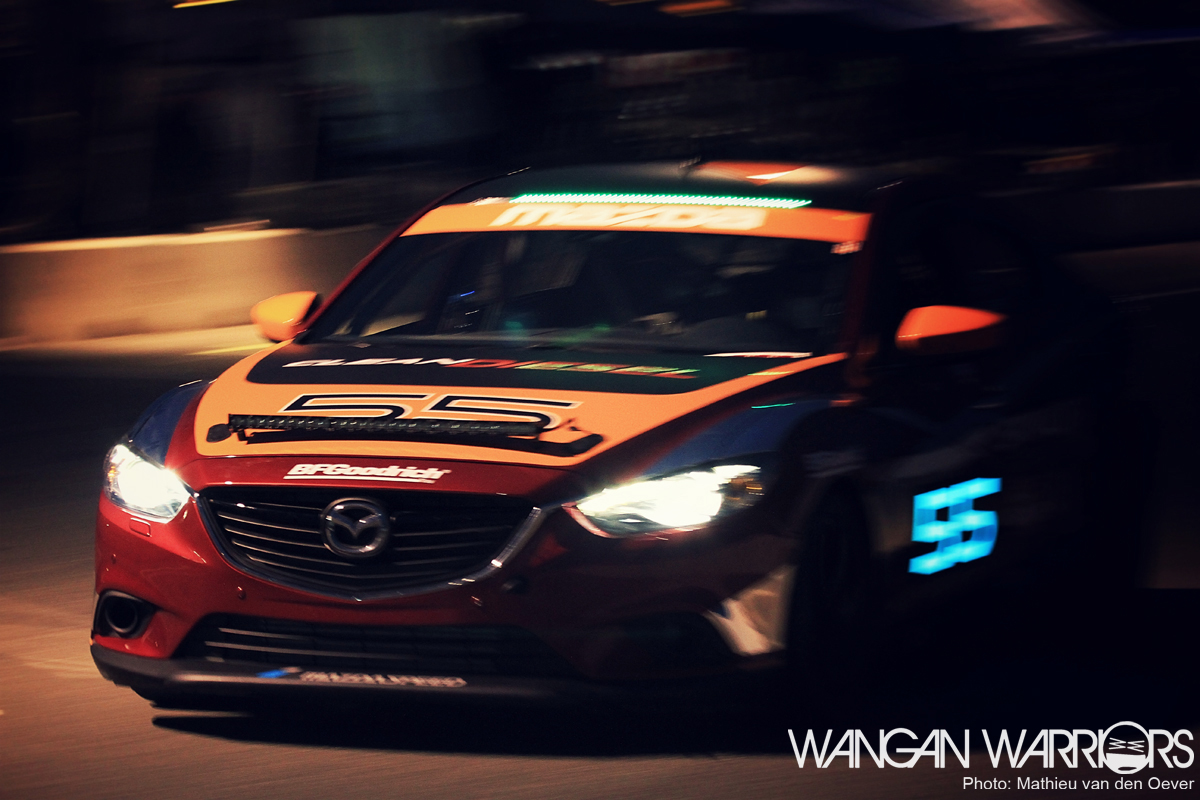 As soon as qualifying kicked off , the teams were rushing to get their cars out on the track and to the top spot of the ranking. Mazda USA fielded three brand new Mazda 6’. Two for their dealer teams and one for the factory guys. With a stripped interior, cage and only a few modifications, these cars were nearly stock factory cars. 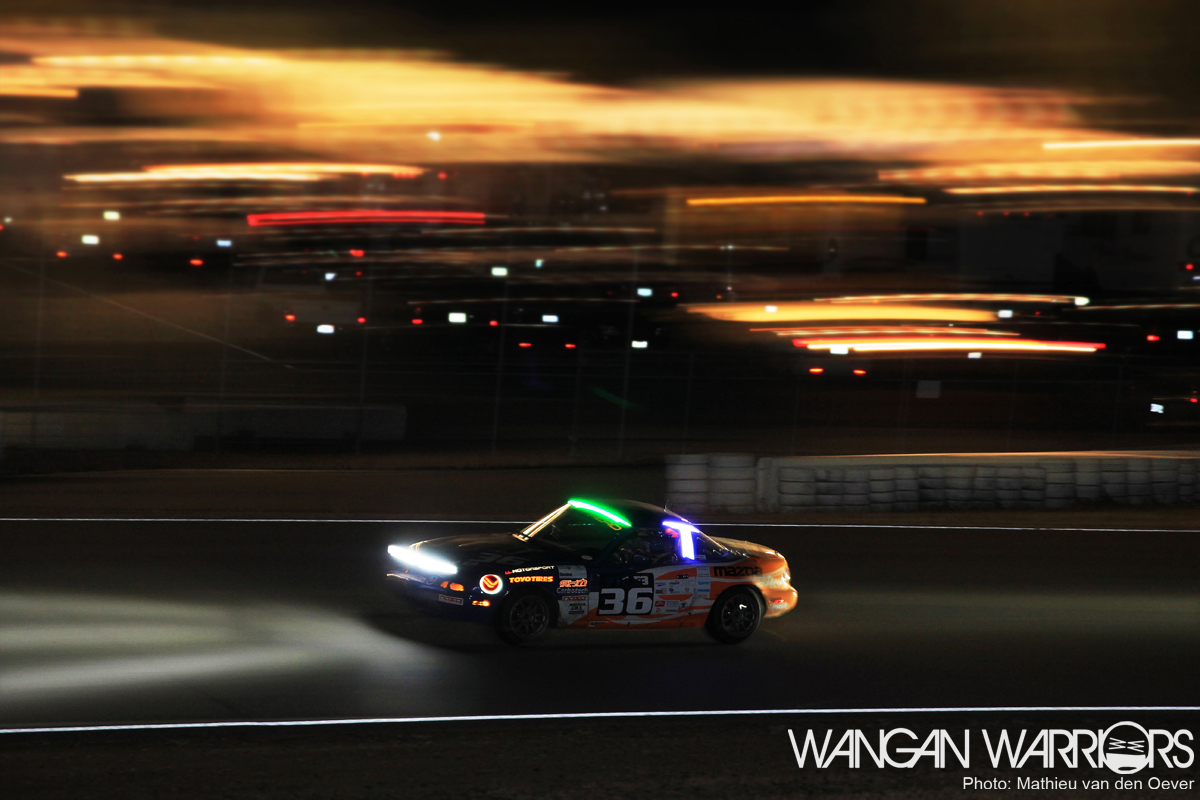 Meanwhile Bart was not just getting to know the track in the dark, he was hammering our #36 car around it. To everyone’s surprise he managed to put the car in fourth place, in class, for the start on Saterday morning. 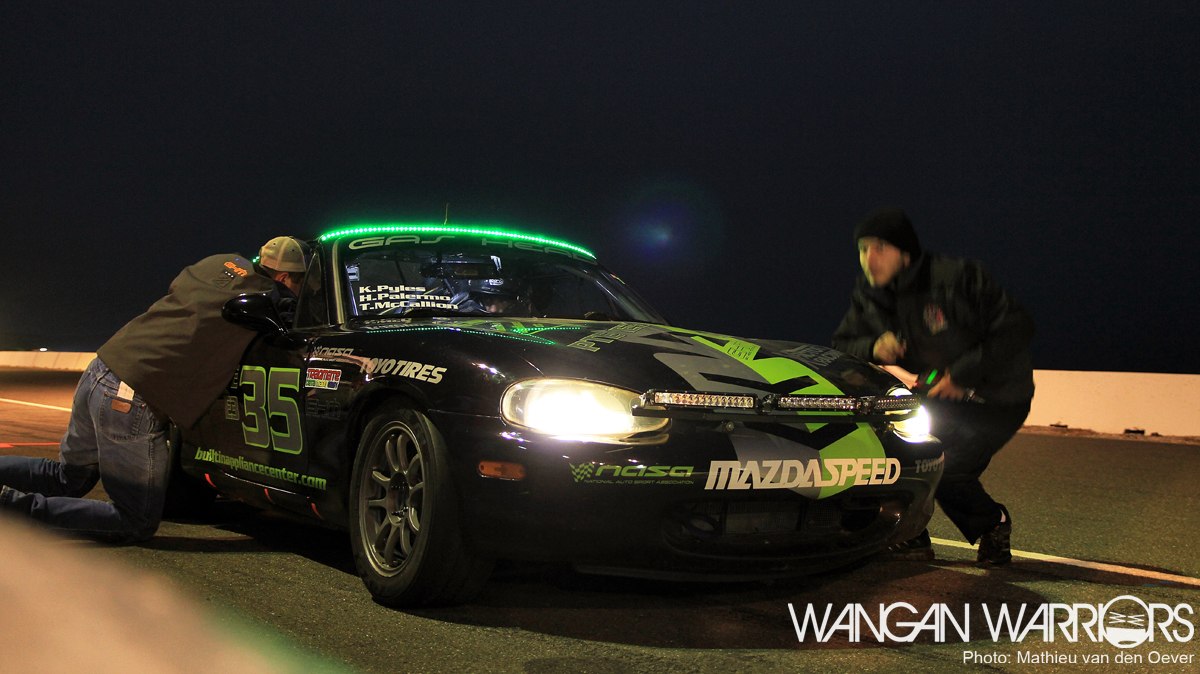 The team of Spare Parts Racing also ran their own NB Miata. Here is our #35 sister car in the pit for some minor adjustments before starting its time attack. With the uber fast Hernan Palermo behind the wheel, they would end up qualifying on 2nd spot so it was a great night for our team. 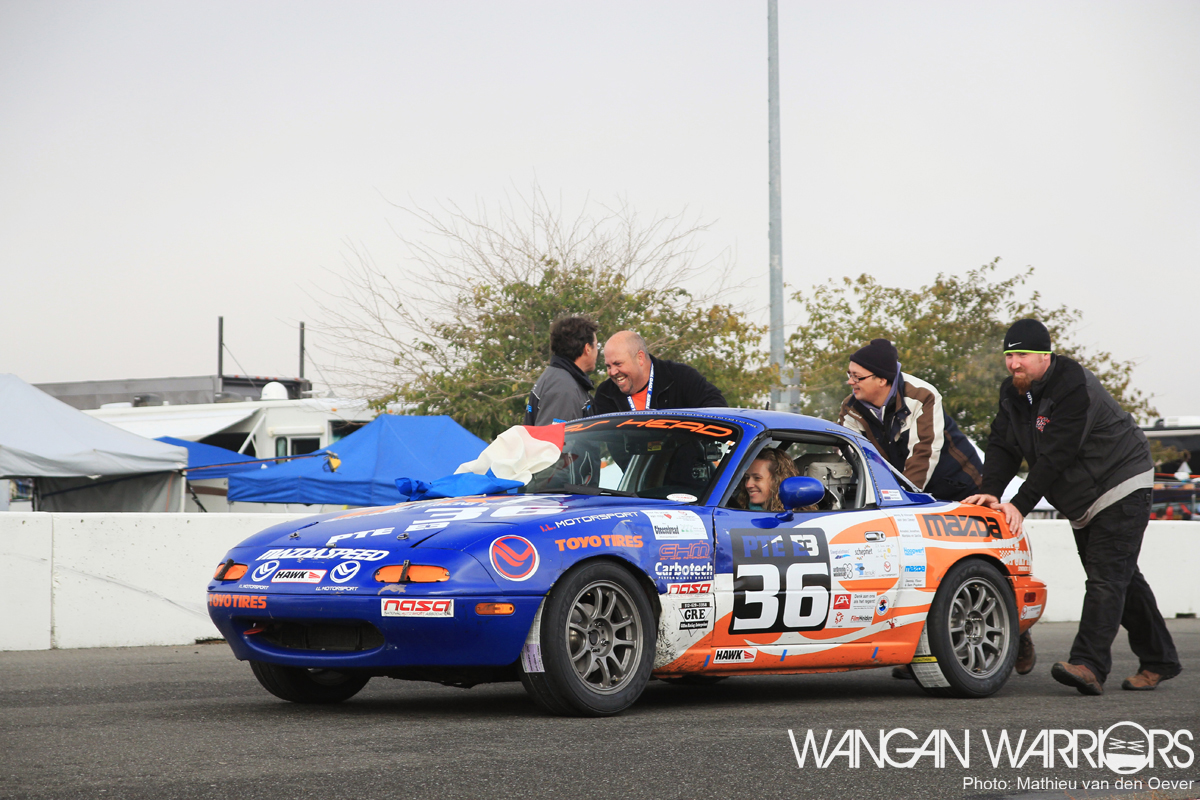 As the start of the race got closer and the tension was rising, the team slowly started to push the car onto the grid. If all would go well we would only see our #36 back in the pit for scheduled stops. 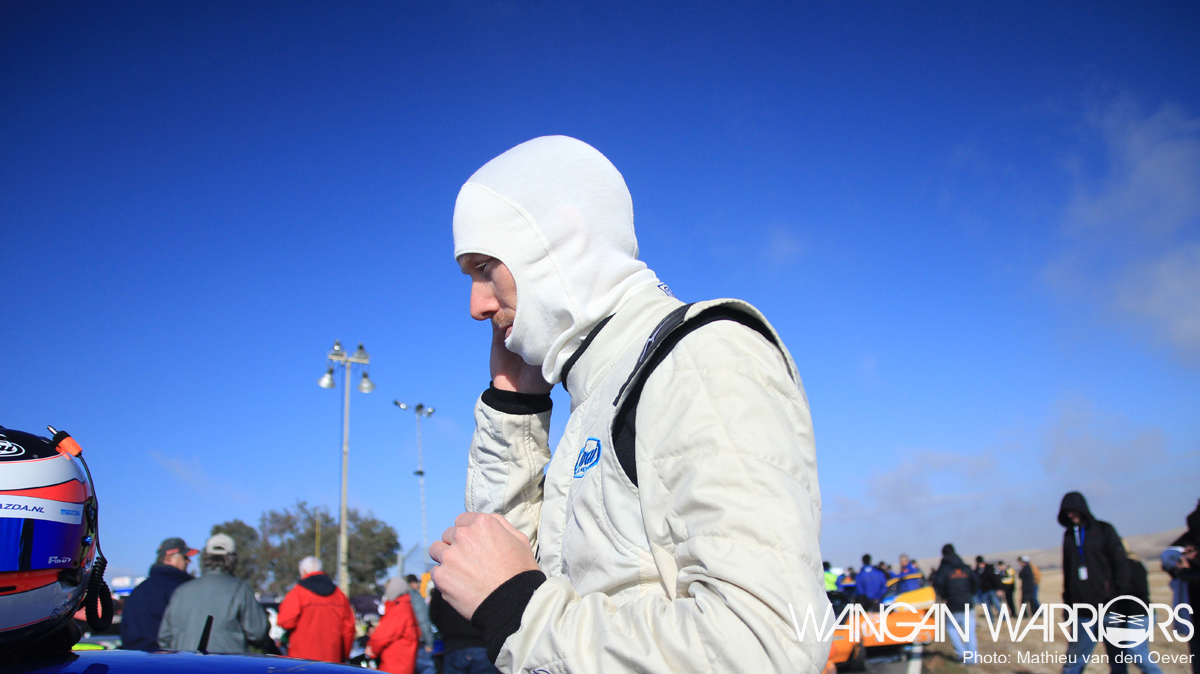 Mick has run several endurance races before and as he was the most experienced racer among our drivers, he would set the pace for the first few hours. After the American national anthem the drivers prepared for the start of America’s longest endurance race. 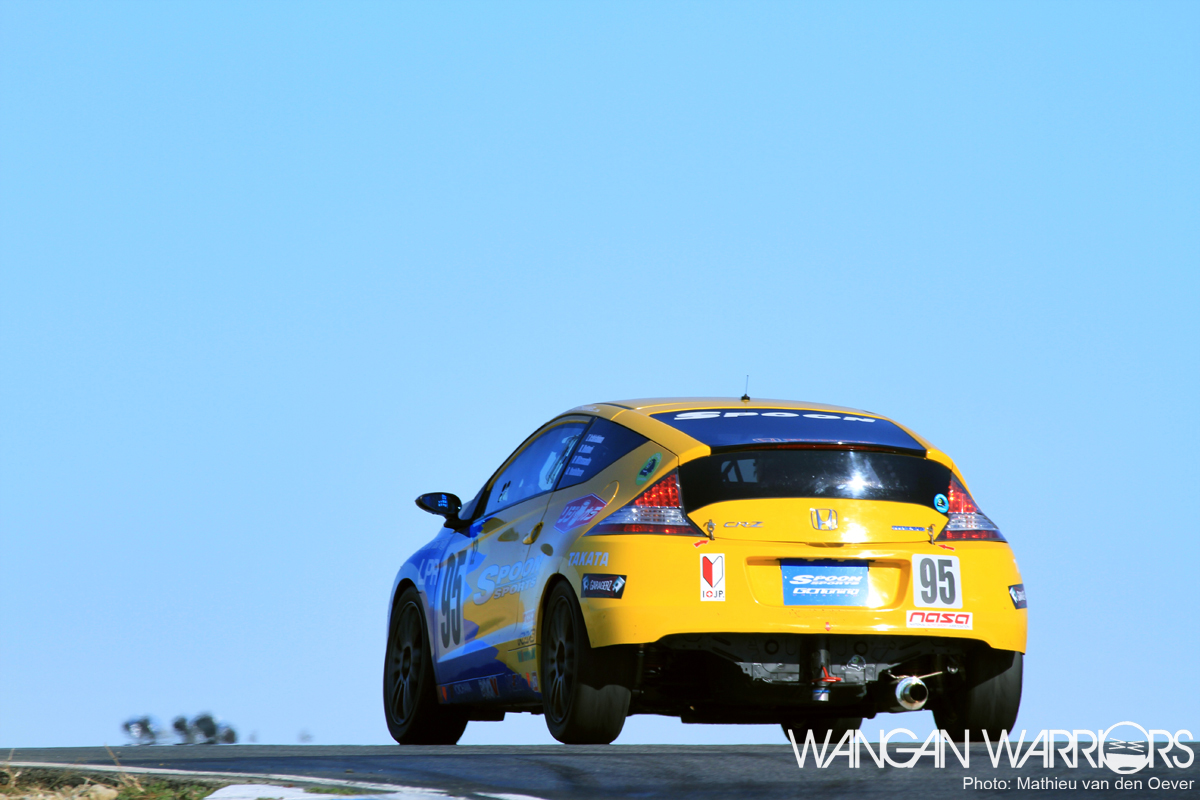 Racetime!!! The flag dropped and 57 cars began their quest to finish. Spoon Sports brought this CRZ and an impressive driver line up to Thunderhill. With Spoon Sports founder Tatsuru Ichisima, Formula D champion Dai Yoshihara, former Super GT driver & Best Motoring host Naoki Hattori and Hidetoshi Mitsusada another Super GT and former Formula Nippon driver. I wonder what they thought of their little Honda as they are used to much faster machinery. 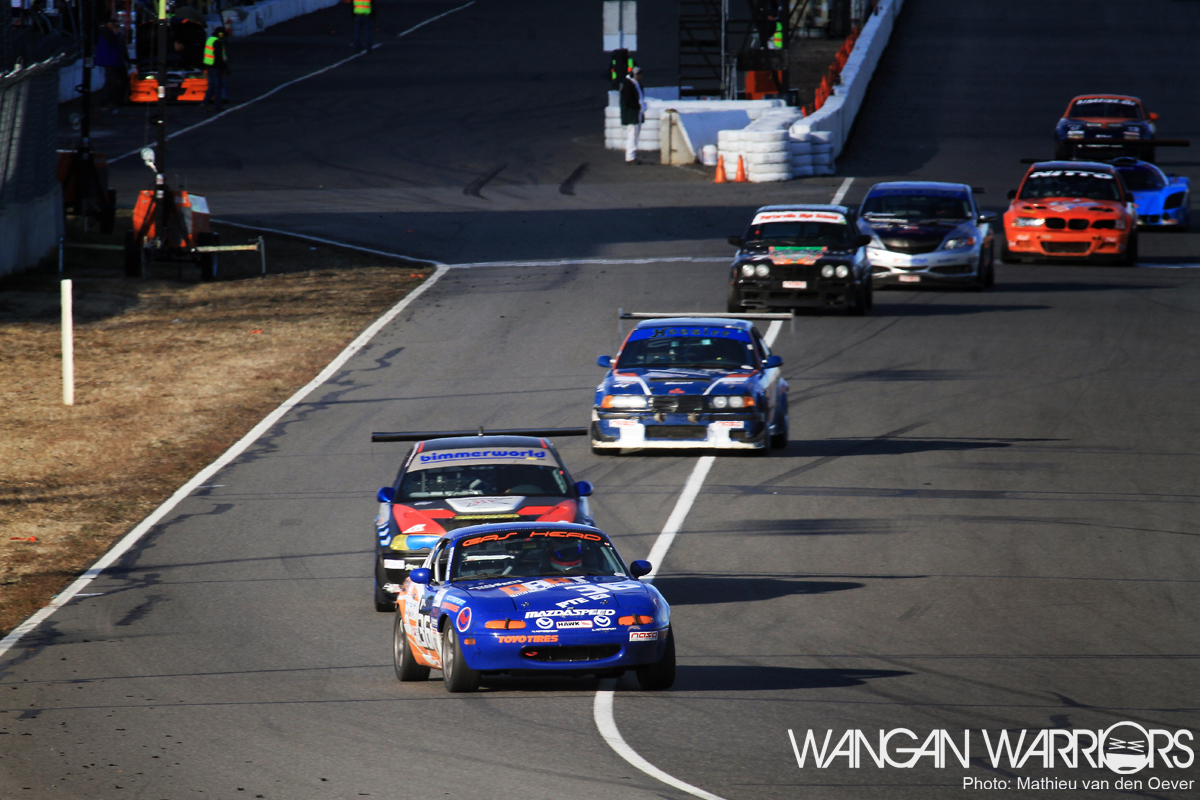 As in most endurance races, the openings hours cause several full course cautions. Drivers are too eager to get to the front, they have to get used to the speed differences between the classes or simply loose focus for that one fraction of a second and make a costly error. Here is Mick leading a pack of cars during one of the neutralizations while the sun slowly sets. 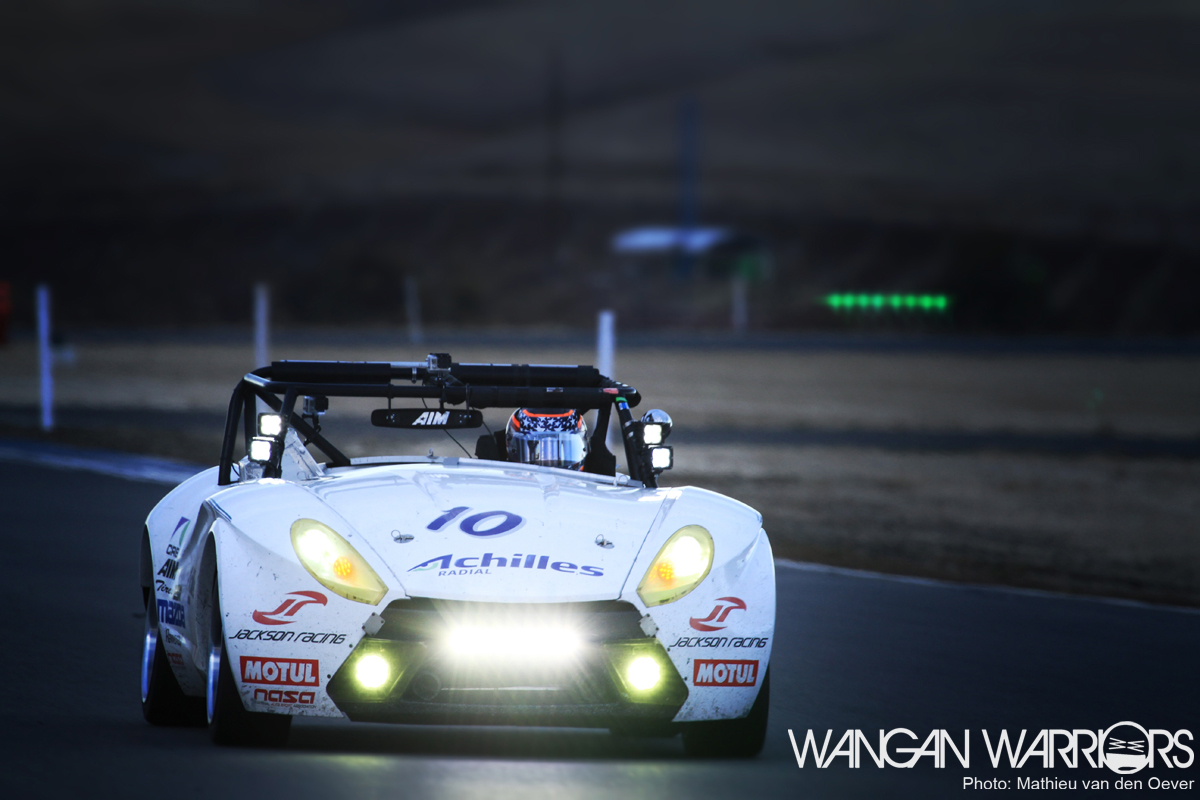 As the race takes place in December it meant that most of the racing was happening in the dark. Like diving in the ocean and fish suddenly appear out of the darkness, so did this Catfish CB01 suddenly pop up in front of my lens. The Catfish is a super light sportscar that utilizes a Miata engine and drivetrain. The car would not see the finish line as it ran into a car that broke down on the racing line and a collision could not be avoided. 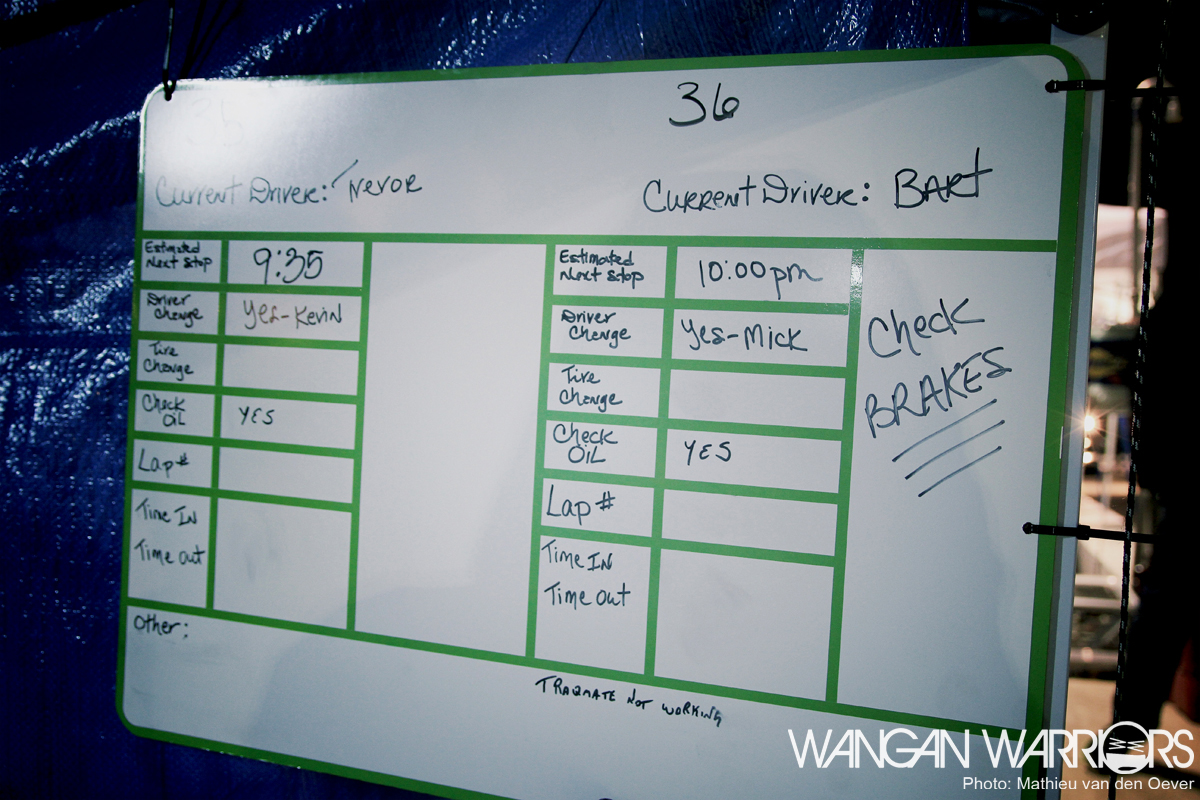 With every stop the team took notes to keep an eye on coming fuel stops, drivers to change and possible maintenance on the car. Every little detail was either being put up on this board or being processed in the team’s laptop. 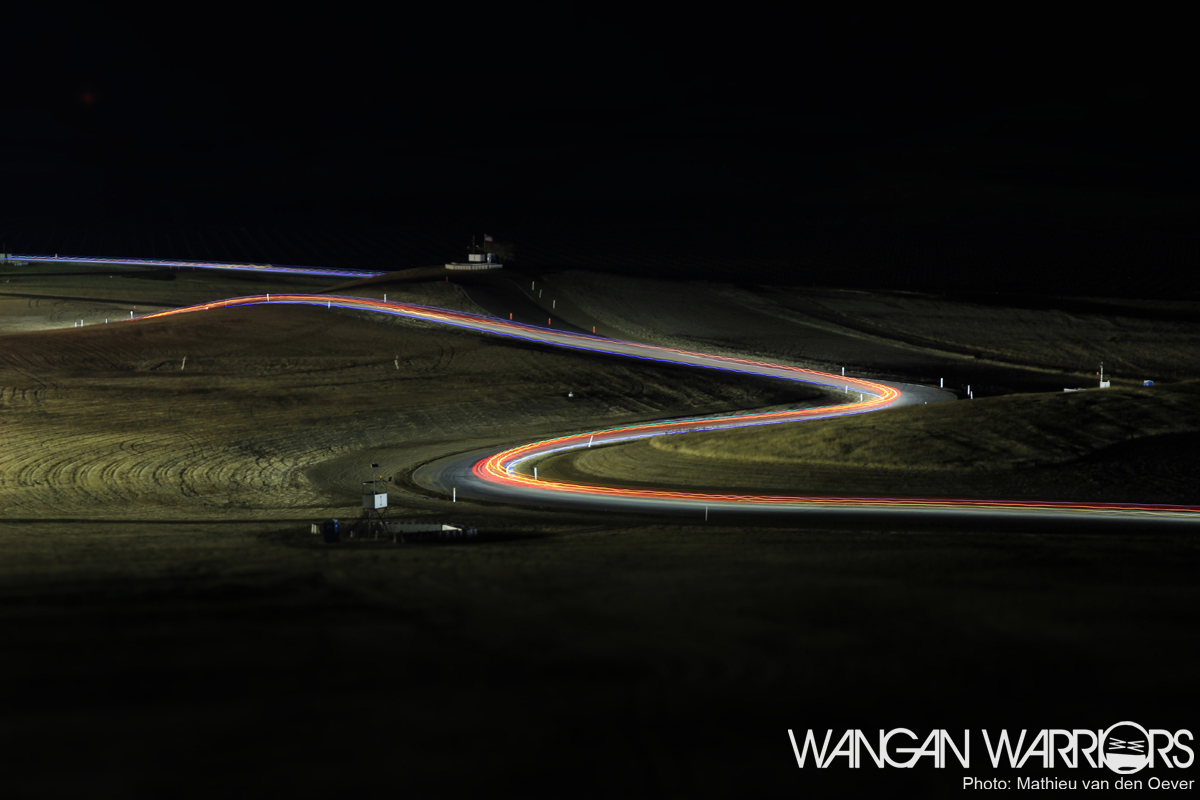 As the evening turned to night the temperatures really started to drop to sub zero temperatures. With the cold winds and the crystal clear night I did not envy the guys driving in the open prototypes. As the previous nights had seen snow, rain and fog I was really happy that the skies cleared up for some midnight photography. 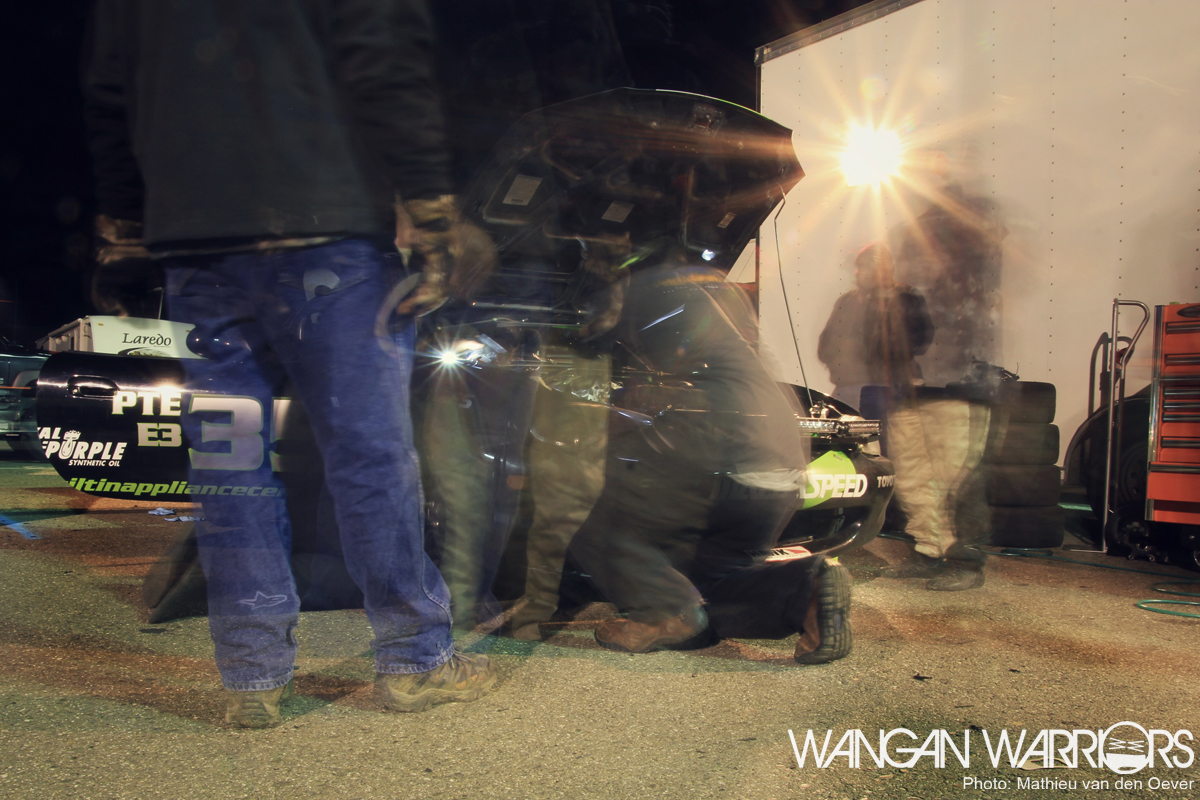 More and more teams started dropping out of the race or were facing technical difficulties during night time. Our team mates in the #35 got bitten by an electrical Gremlin which caused several delays and would cost their leading position at one pont in the race. 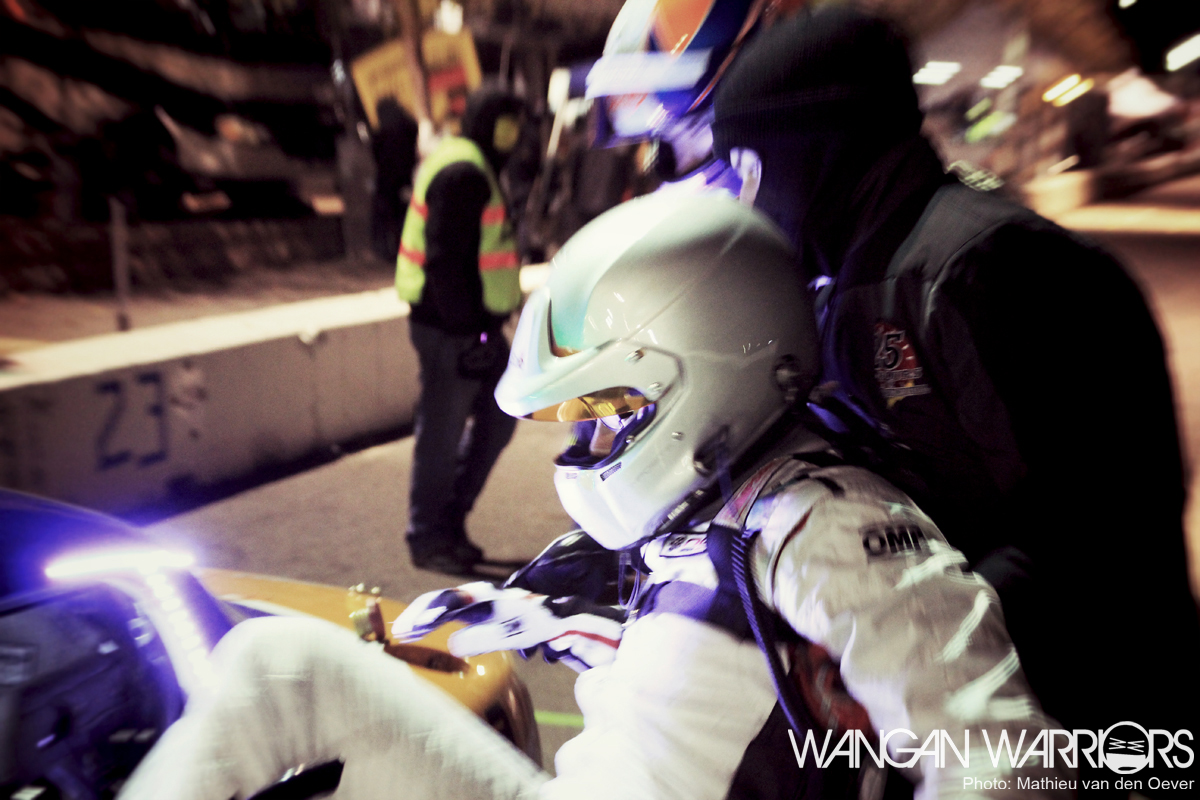 While our #36 ran like clockwork we could not avoid running into trouble as well. Mick got hit hard in the door by another car. We were close to being knocked out of the race but fortunately the damage was only cosmetic. David took over from Mick and managed to take over third place in E3 during his night stint. To improve our lead, quick stops were essential. David was literally dragged out of the car to make room for Bart. 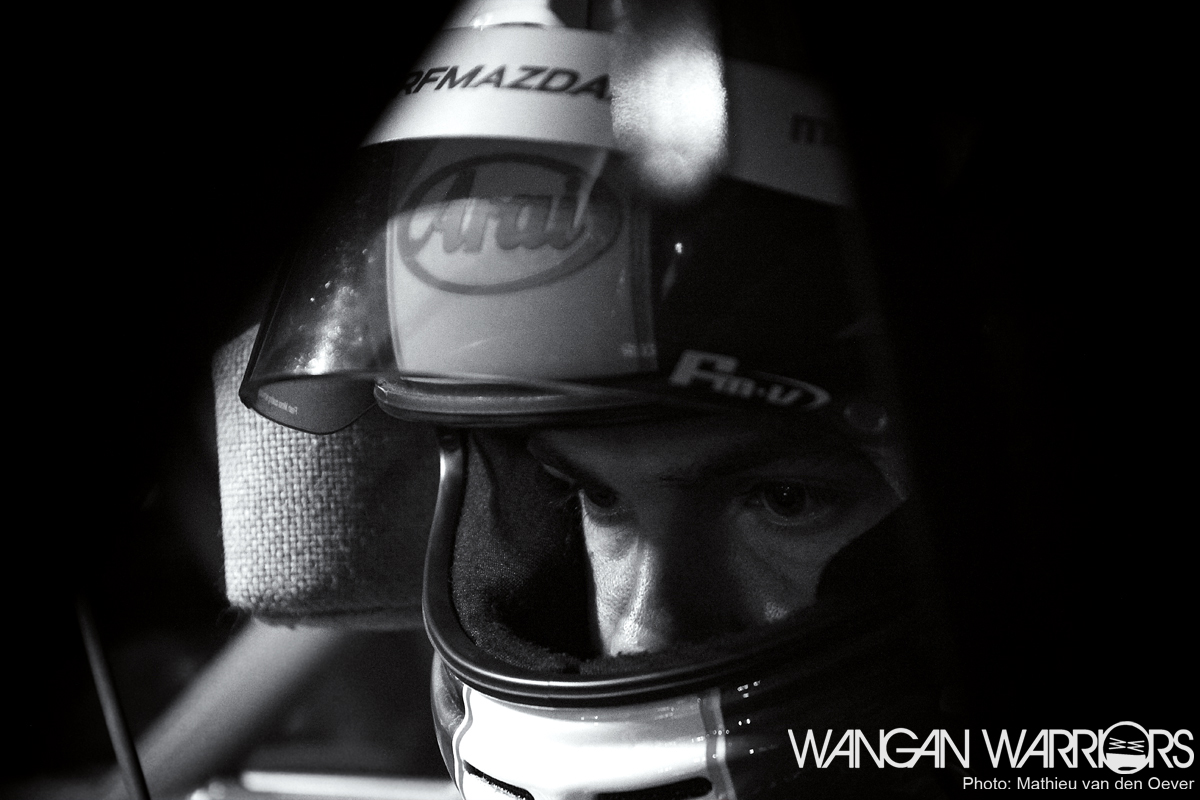 Now more than ever, having focus was crucial. With third place in our hands, only a few laps ahead of the fourth placed team and fatigue kicking in big time, a small mistake could have a huge impact. 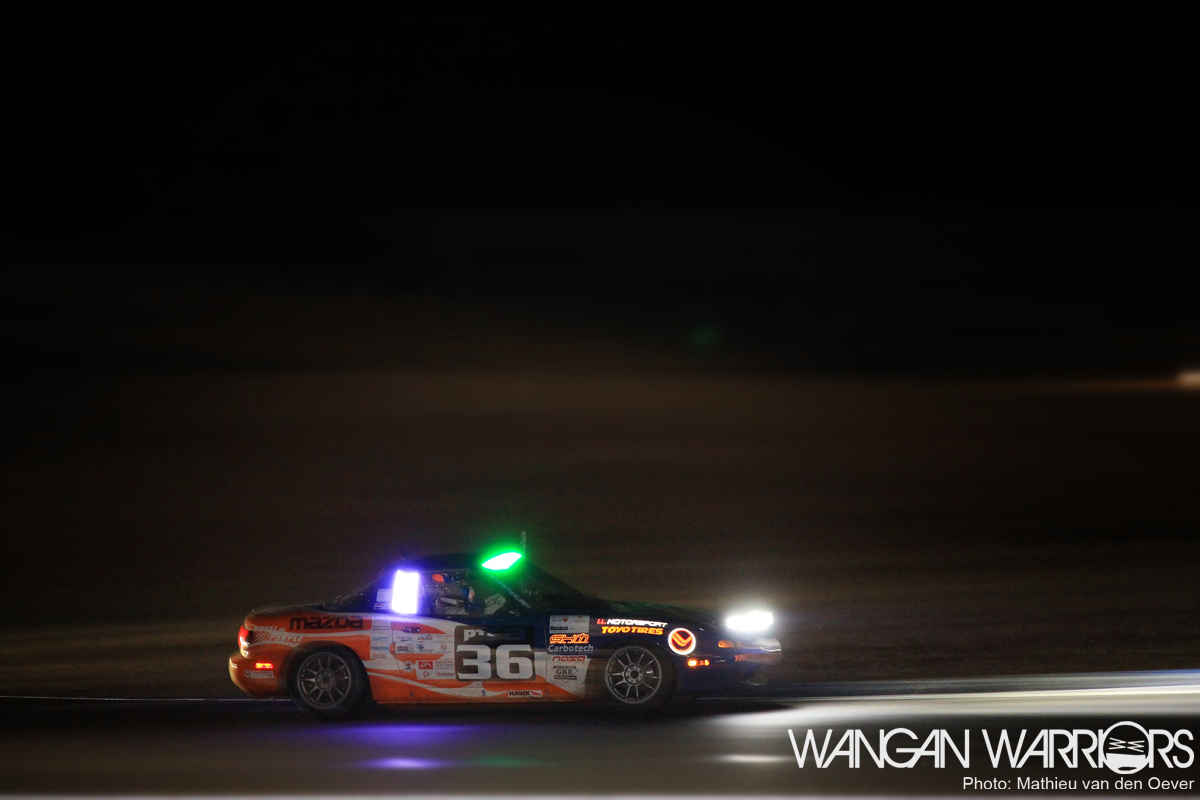 Back on full speed and on his way to the first rays of sunlight. Bart got nauseous from the gasoline fumes or something he ate and did not feel well at all. However he did manage to keep his speed up and maintain third place. 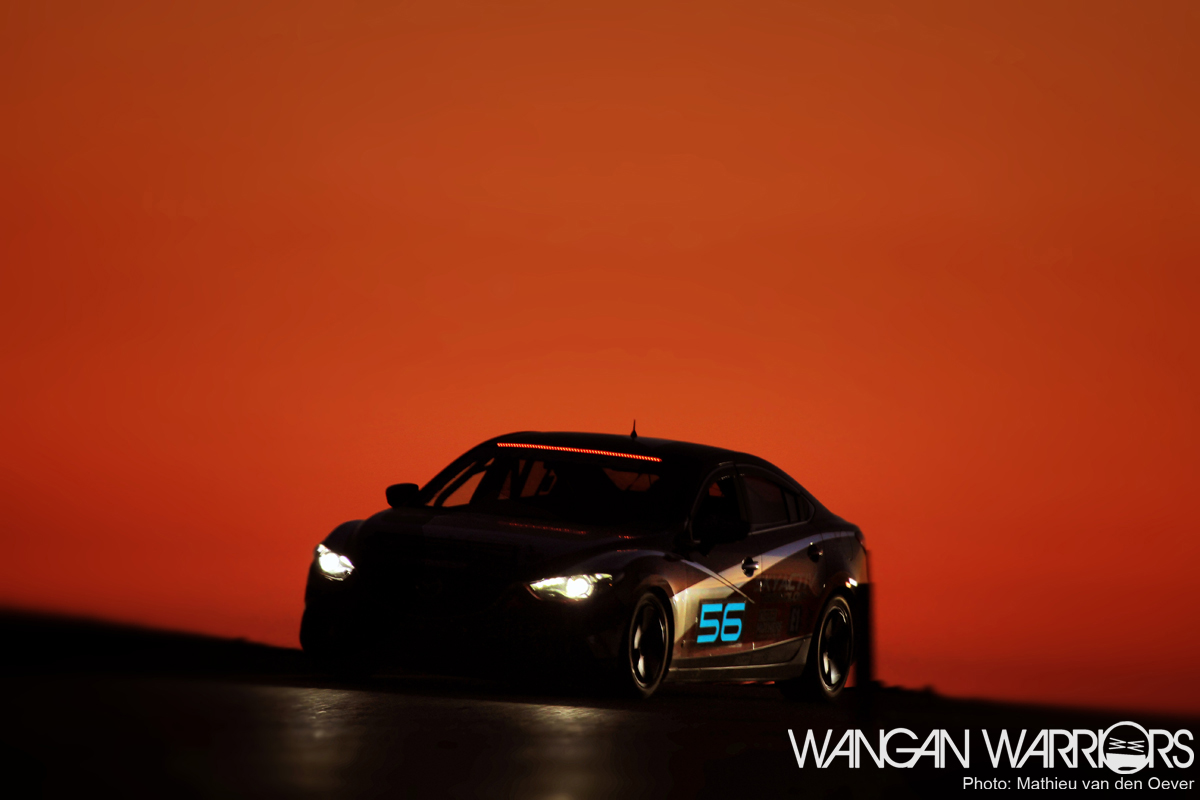 Golden hour!!! The night had been cold and long and everybody was looking forward to see the sun and to feel the temperature rise again. Dawn was upon us and the sky turned red behind this Mazda 6 to announce a new day. 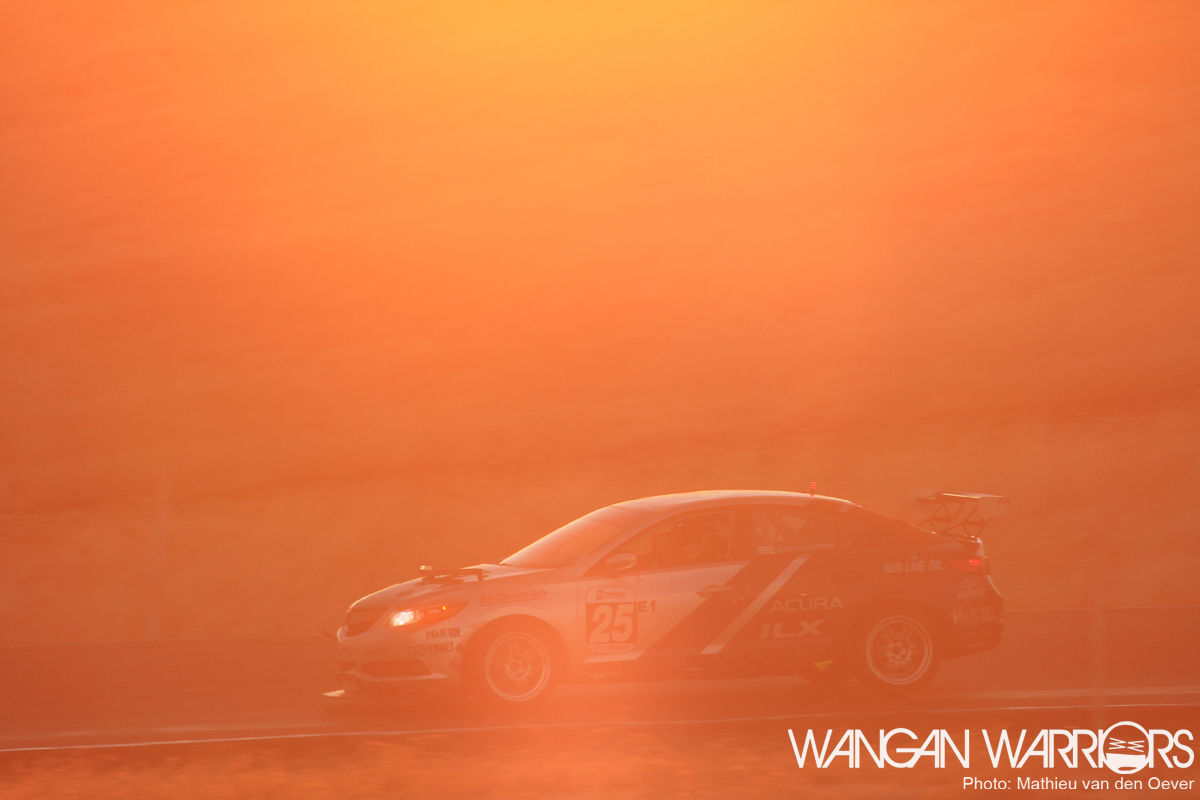 Racing through the early morning sun with the Acura ILX of Team Honda West Research. While the #27 ILX ended up winning the E1 class, the #25 seen here got as high as third place during the race but dropped back to an eight-overall finish. 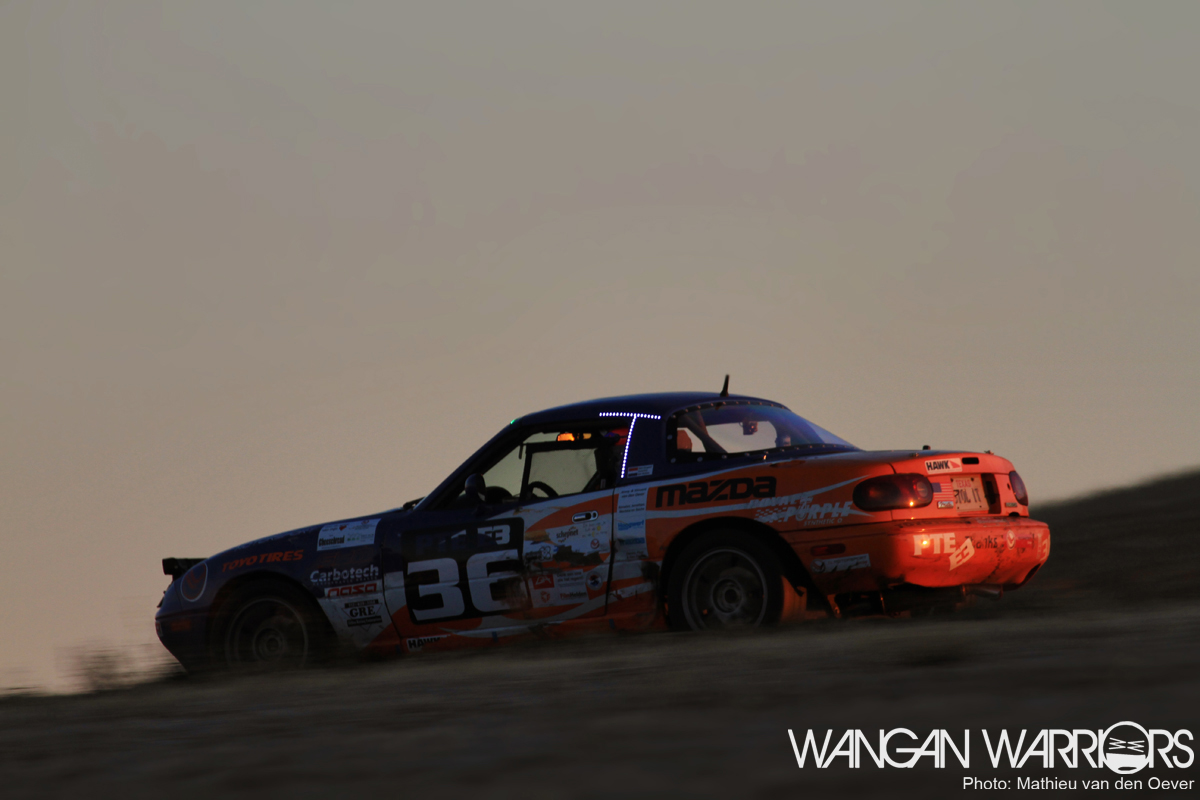 As the darkness faded, more and more damage got visible. Bumpers, carbonfiber parts, broken reflectors, twisted bits of what was once on a car were all lying spread around the track. Slowly the battle scars on our car got visible as well. 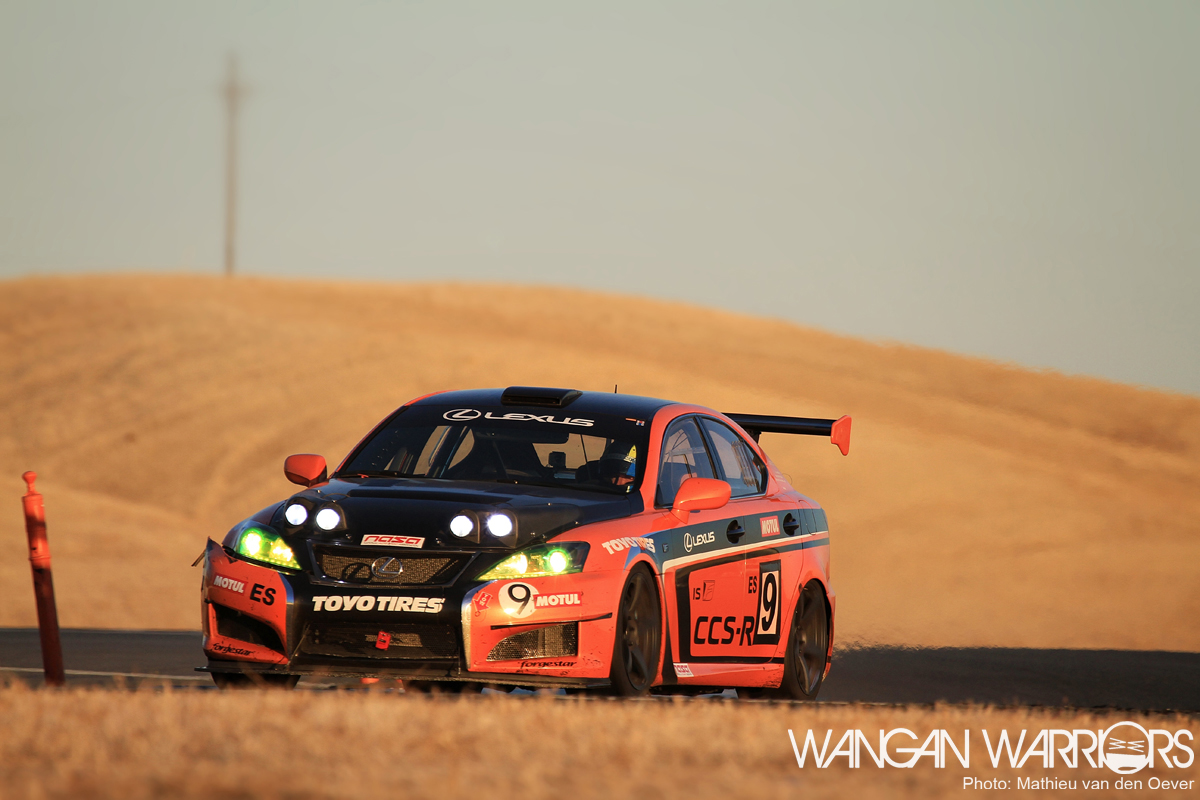 Besides, Mazda and Acura another Japanese brand was present at Thunderhill. Lexus had some great cars out on the track and this CCS-R was spearheading their attack in the ES class. This race version of the IS F had already competed in two previous Pikes Peak Hillclimbs and got a fourth place finish here. 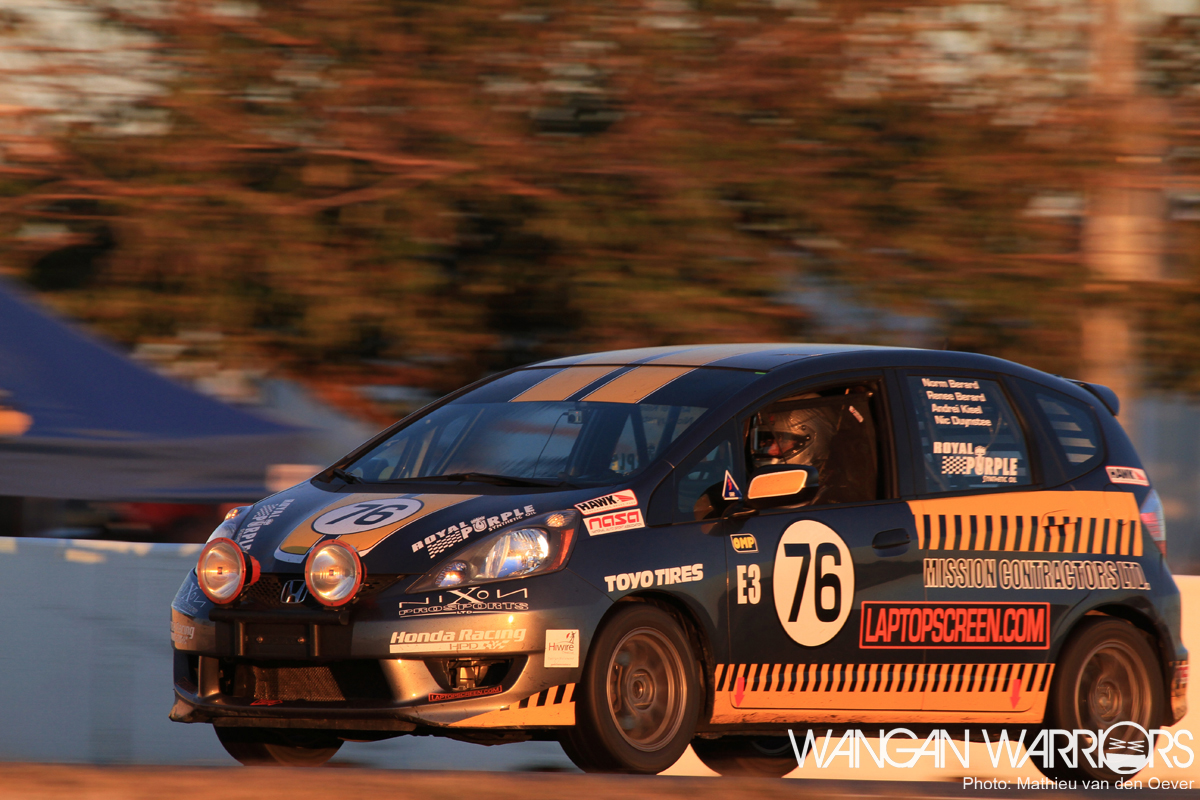 As most Miata’s, the Honda Fits that were running in the E3 class were very reliable. I have not been following this team during the race but the car looked immaculate after some 19 hours of racing. 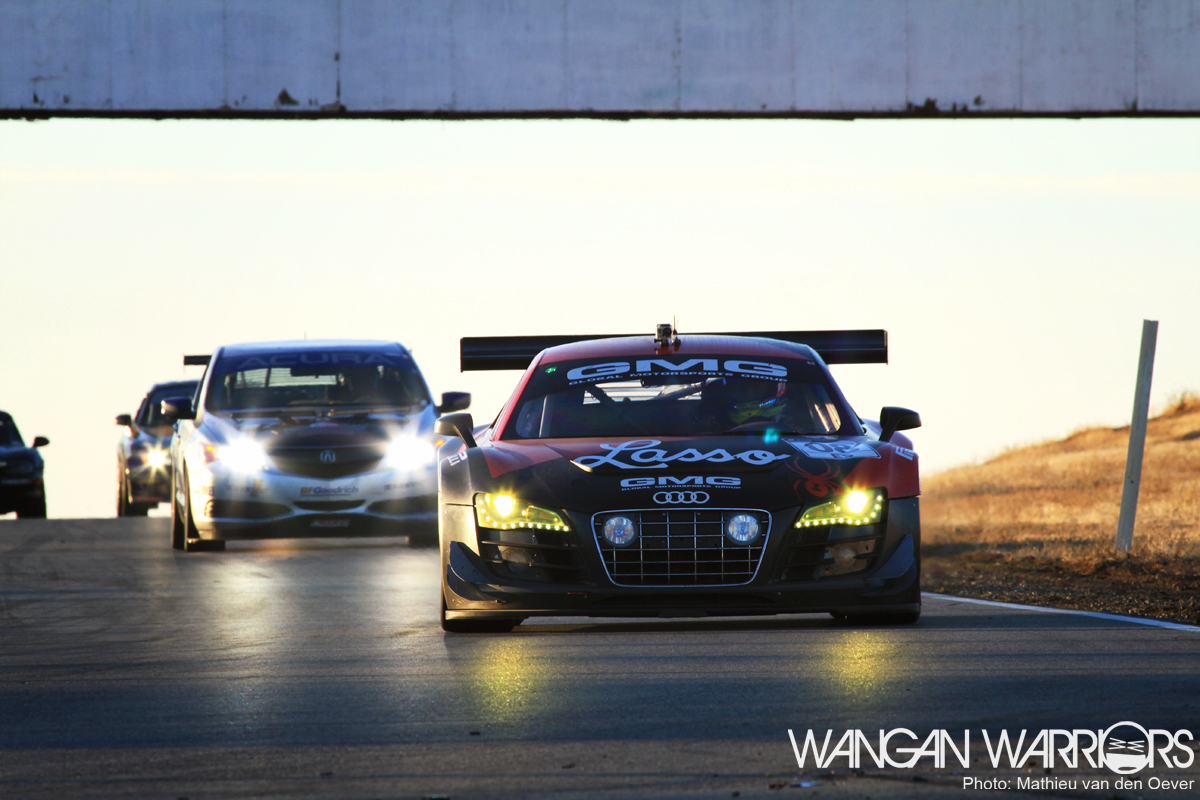 Lady Luck was not on the side of the Audi R8 from team GMG. The car made a heavy crash during the practice session on Friday morning which made them miss qualifying. The team worked hard and the car was able to start the race. As they worked their way up to third spot in ES the gearbox failed at the end of the race. The team pushed the R8 over the finish line in the pits and finished fourth overall and third in ES. 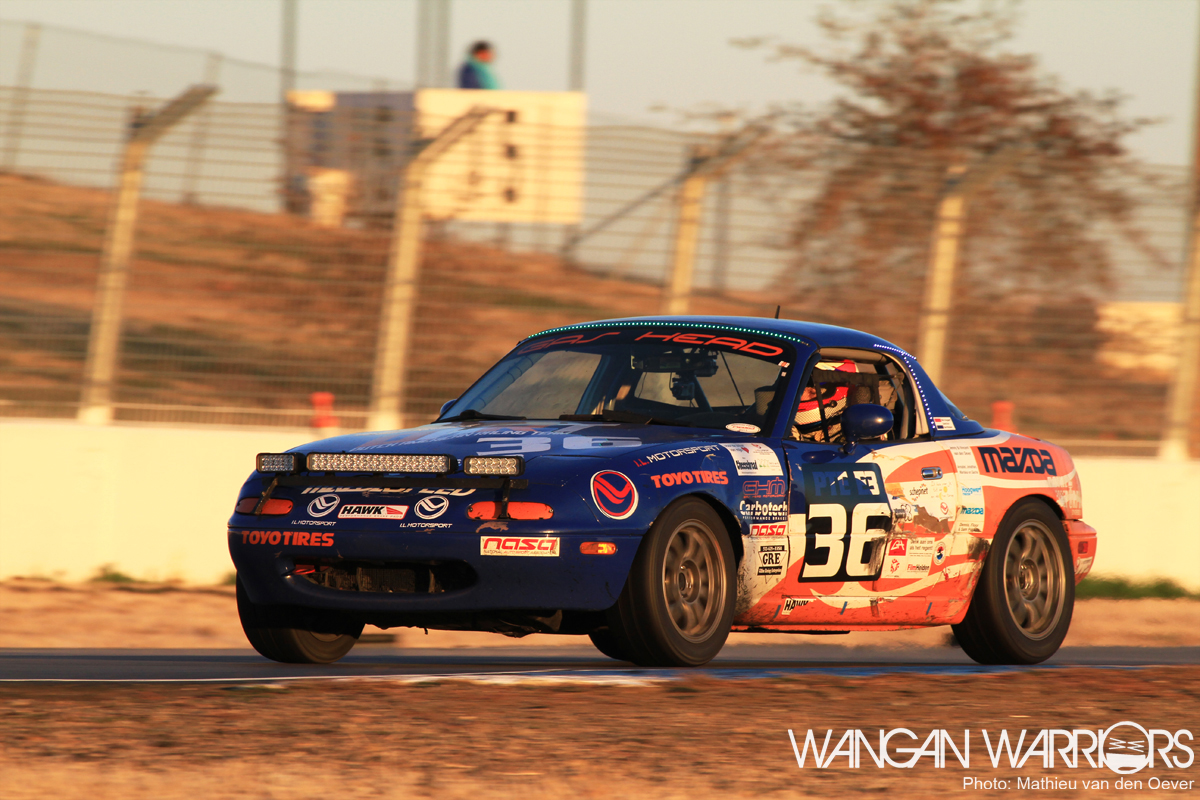 Meanwhile our Dutch American Racing Team got a 5 minute penalty for spilling fuel during a pitstop. The competition quickly closed down on the lead the guys had been building up on the fourth and fifth placed cars. As we still had some laps ahead, the team had their focus on bringing home the car in one piece. 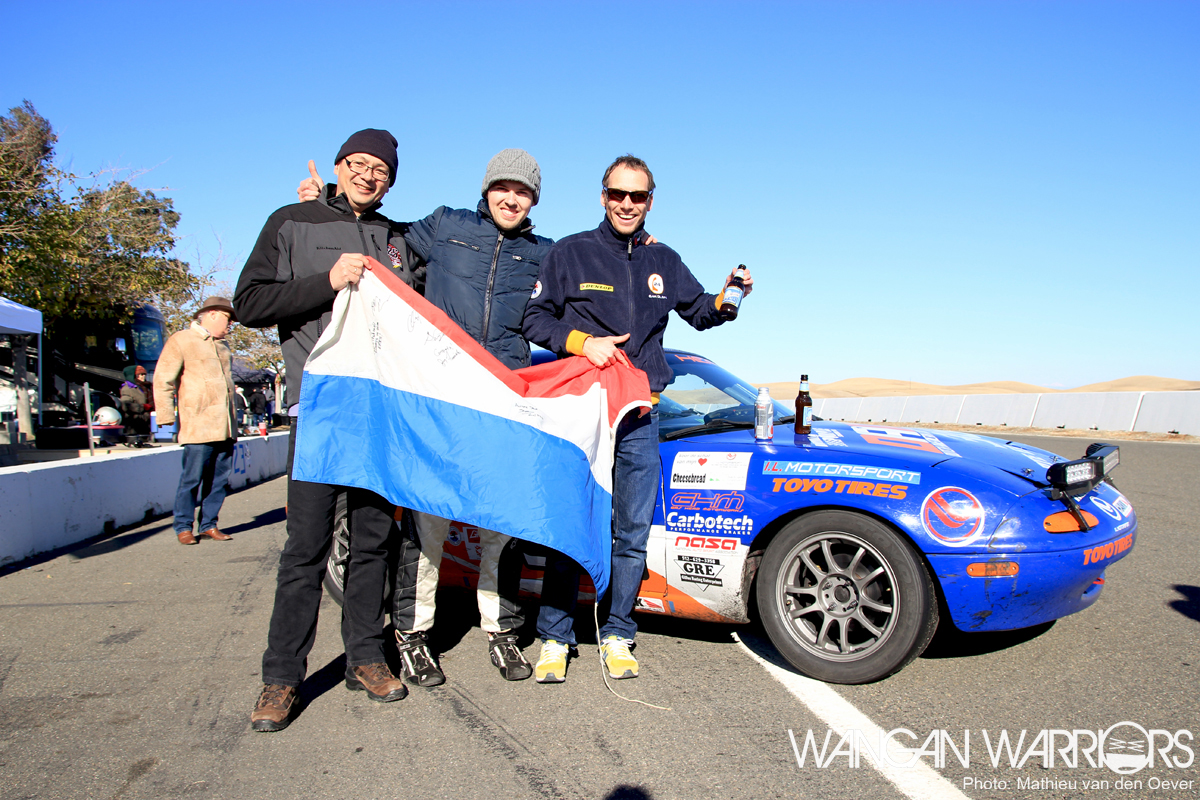 After 25 hours of steady racing and managing to stay out of trouble, the team could finally celebrate a well deserved third place. However after the technical scruteneering in Parc Ferme, the second placed car got disqualified moving us up into second place in E3. A result we could never have expected when we left Holland only a week before. 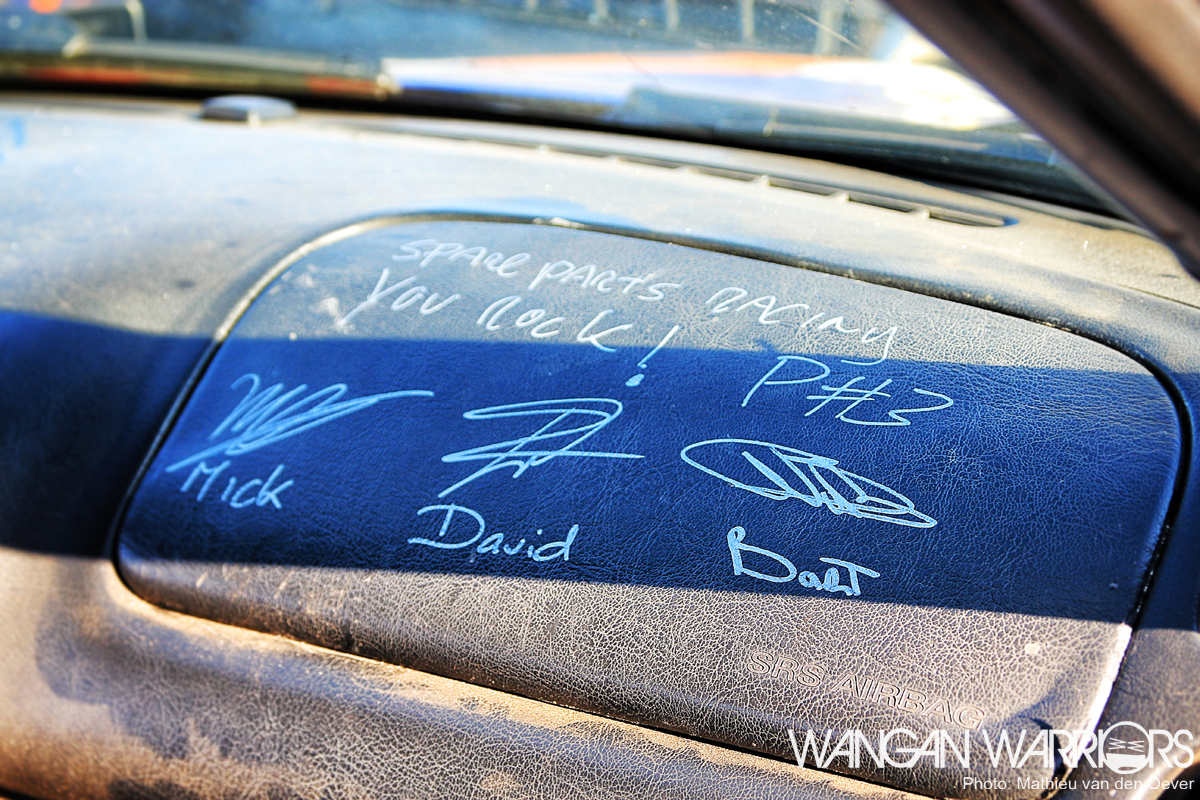 Even though we only met the teams of Spare Parts Racing and Gas Head Motorworks just that week, it felt like we were leaving behind some great friends when we left the track. But before we said our goodbyes the teams signed our flag and the drivers did the opposite with the beloved #36 Miata.