Question: how did you get into car culture? Was it because of that Ferrari F40 poster you had above your bed when you were a kid? Did you have bBurago die-casts when you were younger? Was it that one plaid with the streets and buildings on it that first caught your fascination when you used to play on it? Or did it come later in life, without you knowing how it started and where it would take you? I recently found myself pondering about this question, and the conclusion was that it all really started with a piece of Japanese car culture that hasn’t been featured on this blog. Until now that is. 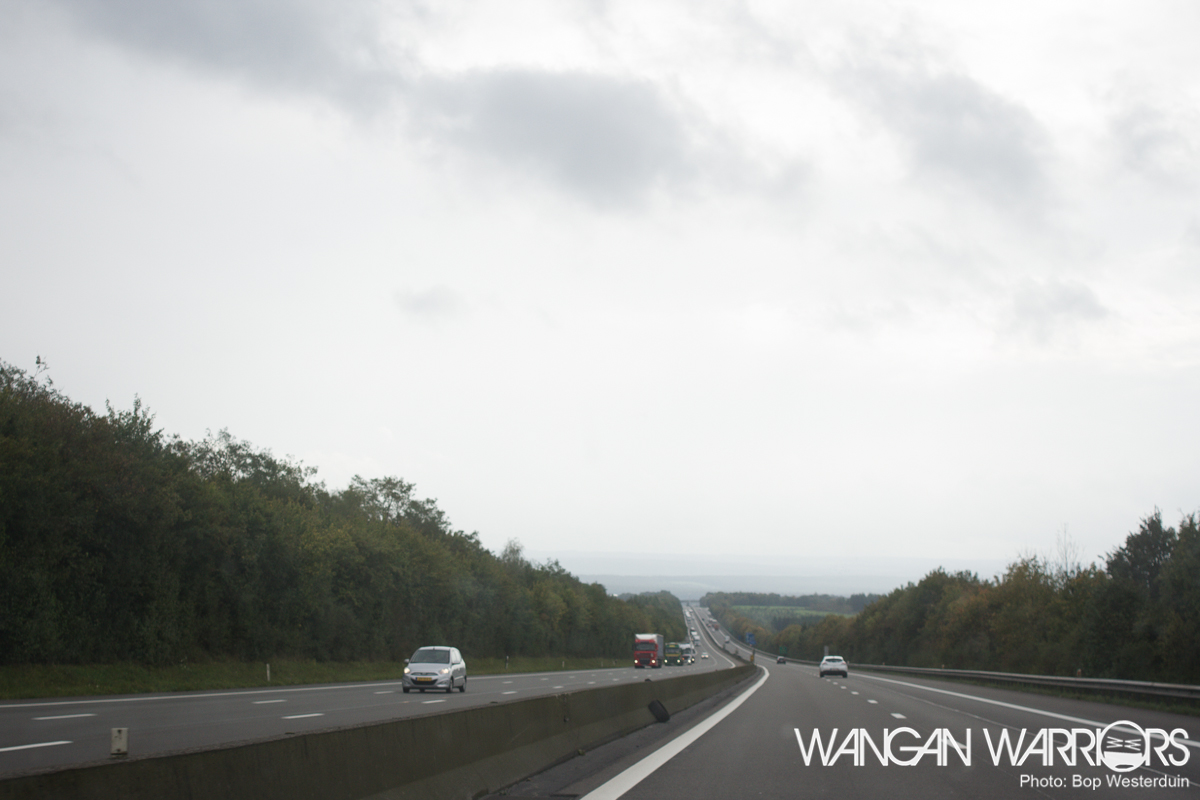 The human brain can be a wonderful thing; here you are, driving in a car, and suddenly your mind starts going places that are completely unrelated to maximum speeds, idiotic BMW drivers and the Gendarmerie. You ask yourself: “How did i get here?” and “Why did I meet all of the people that I’ve met over the years?”. Also; “Who the f@k decided to name this stretch of road the Route du Soleils when we haven’t seen the sun all day?” 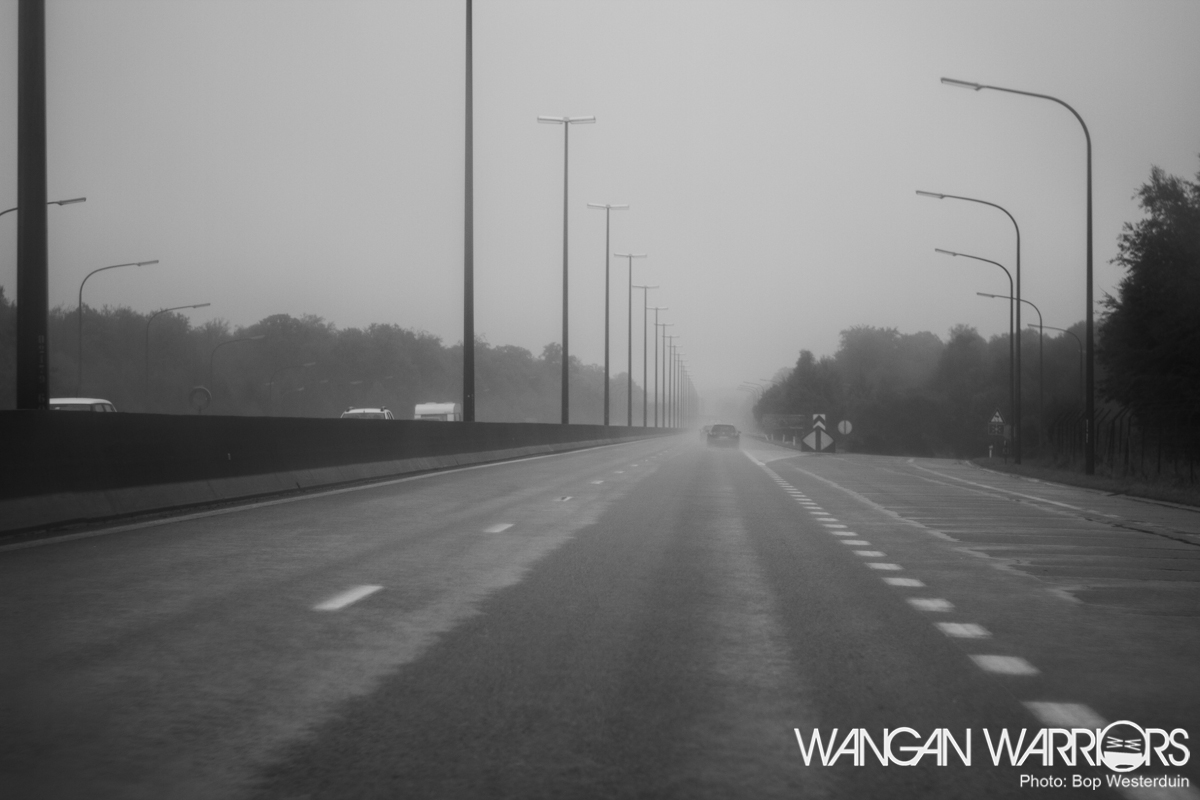 You see, some time ago I found myself in a car with my buddy Tijs roadtripping southwards towards the city of Roanne, France. The weather had been fairly reasonable for the first few hours, but as soon as we passed through the Ardennes it changed from dry-ish to all out rainstorm. Aquaplaning was so bad at some points that the car would just lose all of its front grip for a few hundred meters. With visibility down to about 10m in every direction and lorries overtaking each other every other kilometer you can probably imagine that it wasn’t the most relaxed of drives. 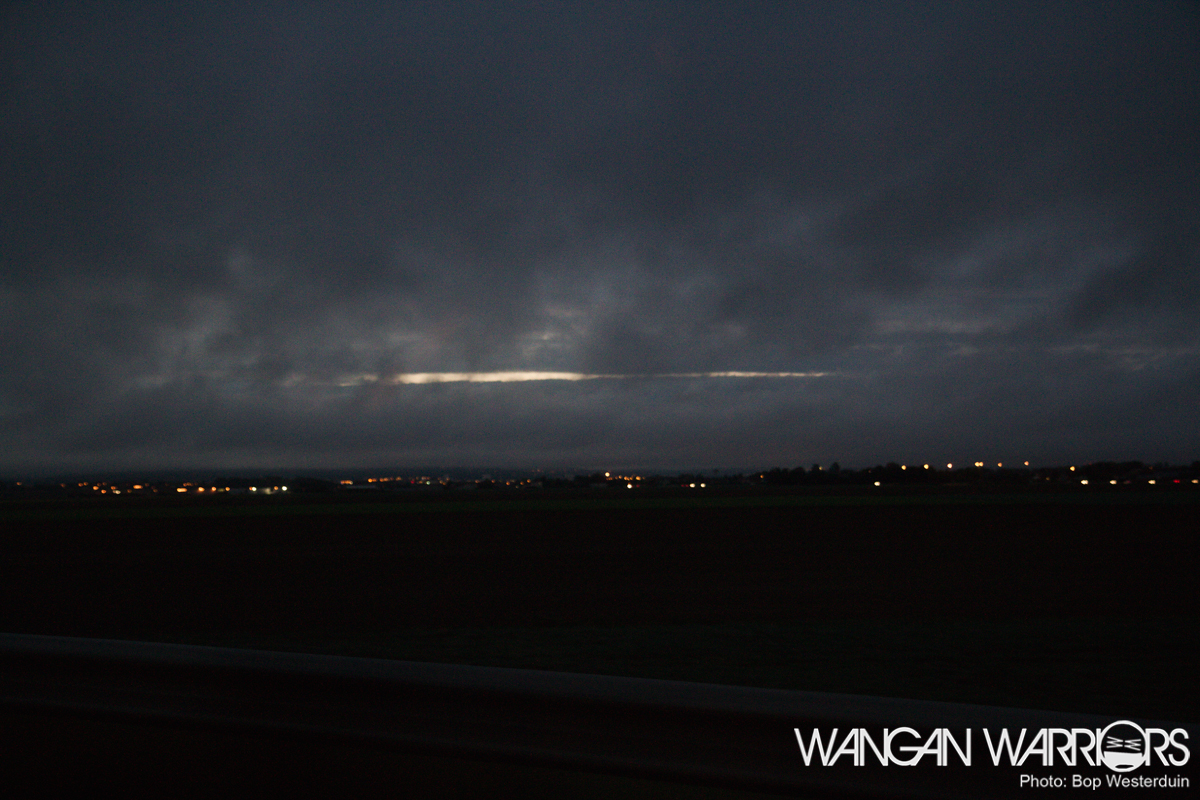 As the hours went by the weather quieted down and the road got clearer, meaning I had some time to think about the things I mentioned before. I had travelled nearly 1000km’s in a day for the hobby that sparked my automotive interest: drifting with remote controlled cars. Tijs and I have been attending Grip Zero, the French RC drift competition, for a few years now so it’s become a yearly tradition. I figured some of our audience might like this niche of JDM culture, so pleace let me introduce you to a form of drifting you haven’t seen before… 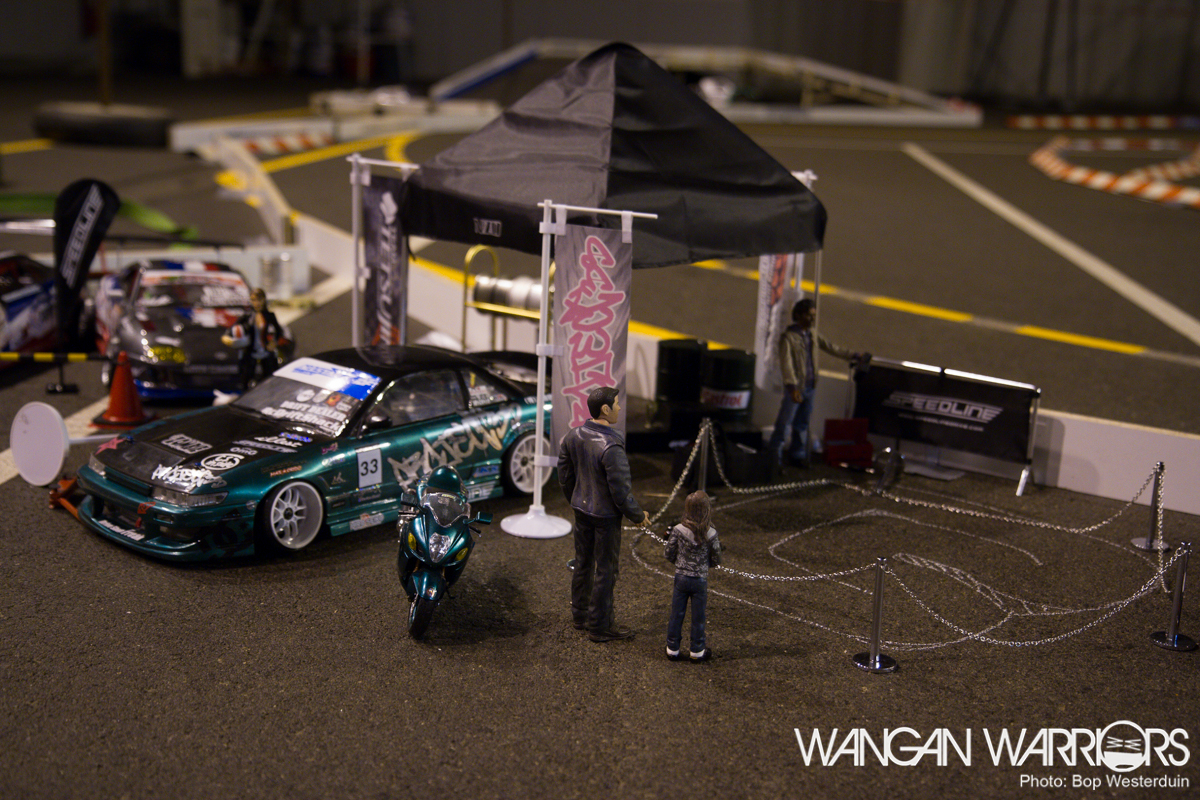 Welcome to the world of RC drifting. When I mention that I enjoy driving remotely controlled cars most people instantly think of the plastic crap you can buy at a toy store, but in reality it couldn’t be further from the truth. You’ll read about it further on, but basically you get all of the setup options that you get on a real car and more. The materials that these cars are made of are normally only reserved for the upper echelon of automotive engineering and the best part is; you can make it look like any car you want! 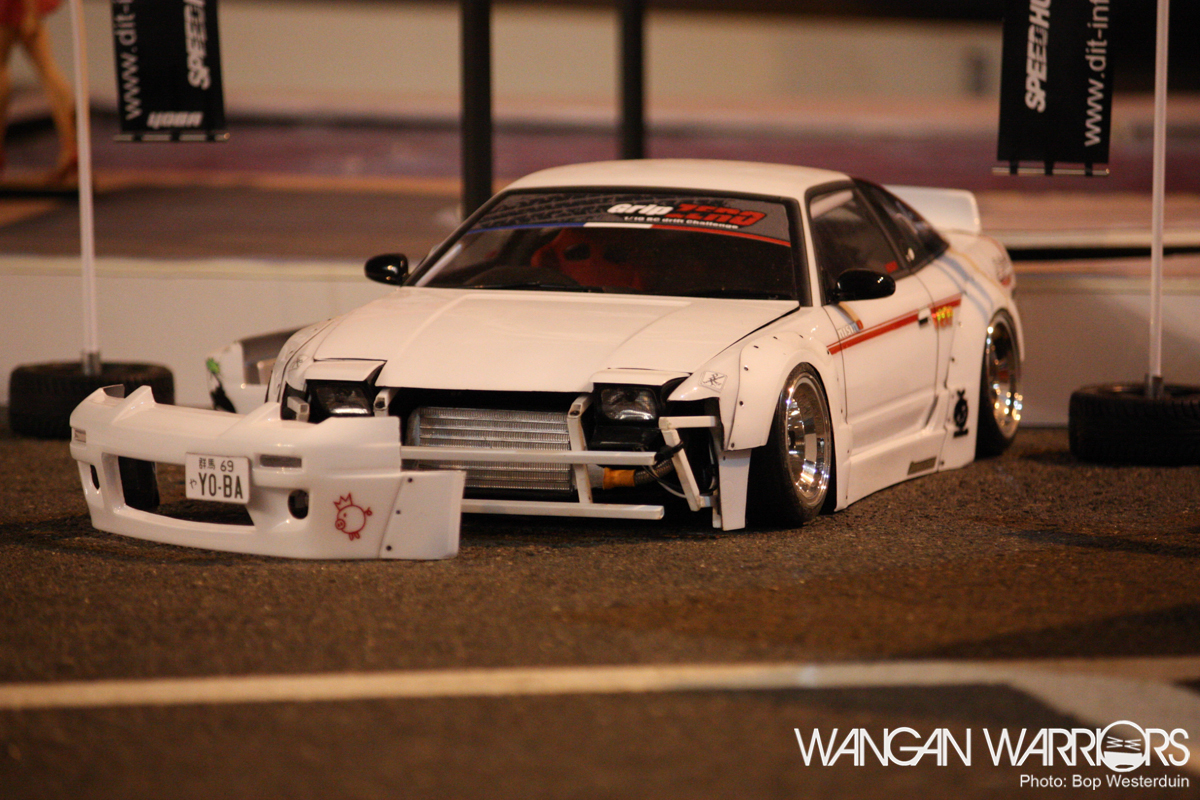 I started RC drifting when I was around 13 years old. I found the construction and the ingenuity of these little cars mesmerising, and since I didn’t have a drivers license at that time (obviously) it was only logical to give it a go. Because the exterior of the cars, the “shell”, can be changed with ease the world of RC drifting is very appealing to people who don’t have the budget to soup up a “real” car. This allows you to build insanely detailed replicas but also have a competition shell that both fit onto the same chassis. 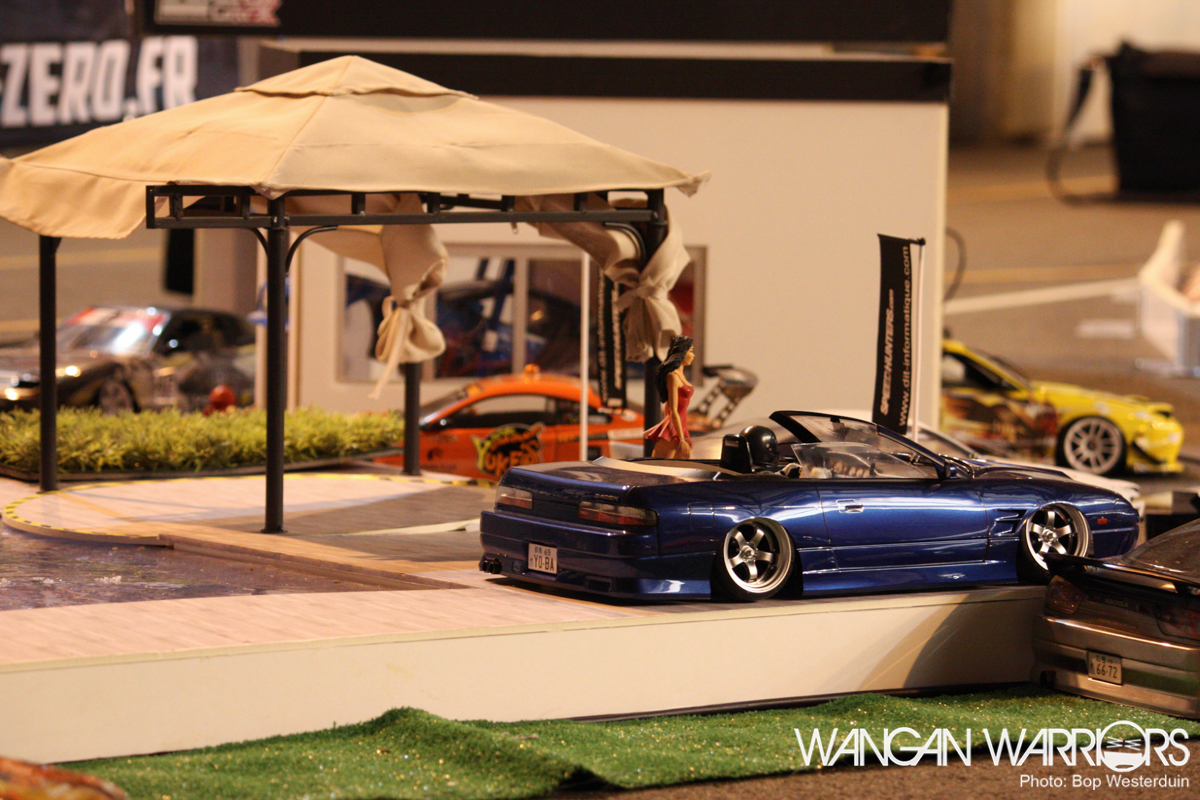 Because the bodyshells, bodykits, spoilers etc. are relatively cheap it’s very easy to let your creativity take control and build whatever you want. No MOT, no road tax, just build what you want. A slammed S chassis parked next to your California-style condo? Sure! 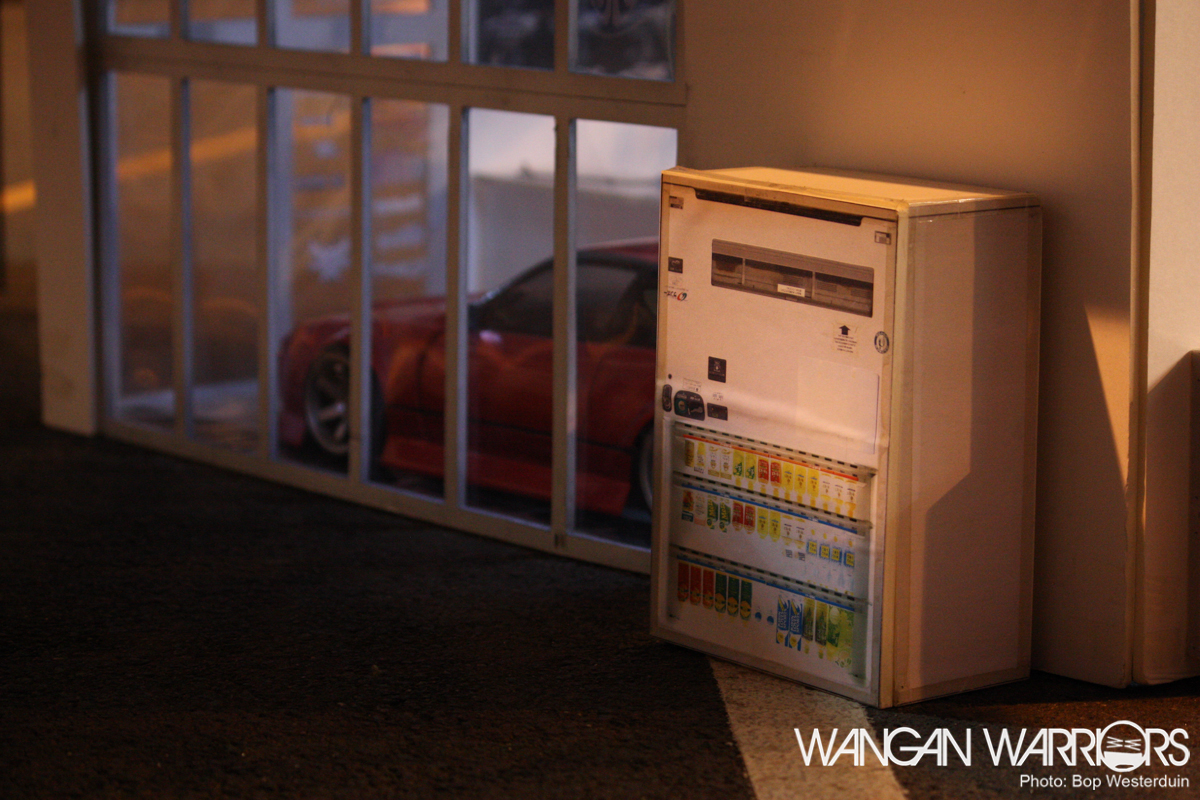 Or do you prefer having you own workshop with an ultra-JDM (upside down) vending machine next to it? No problem! The attention to detail on these displays is really on point, the style of the ancillaries enhancing the style of the vehicle thats parked next to it. People spend weeks building these bits of scenery, and these are just to show of their kit when they aren’t driving. Hardparking is fun and all, but in my personal experience there is nothing better than looking good whilst doing what your car is made for, regardless if it’s real size or 1/10th scale. 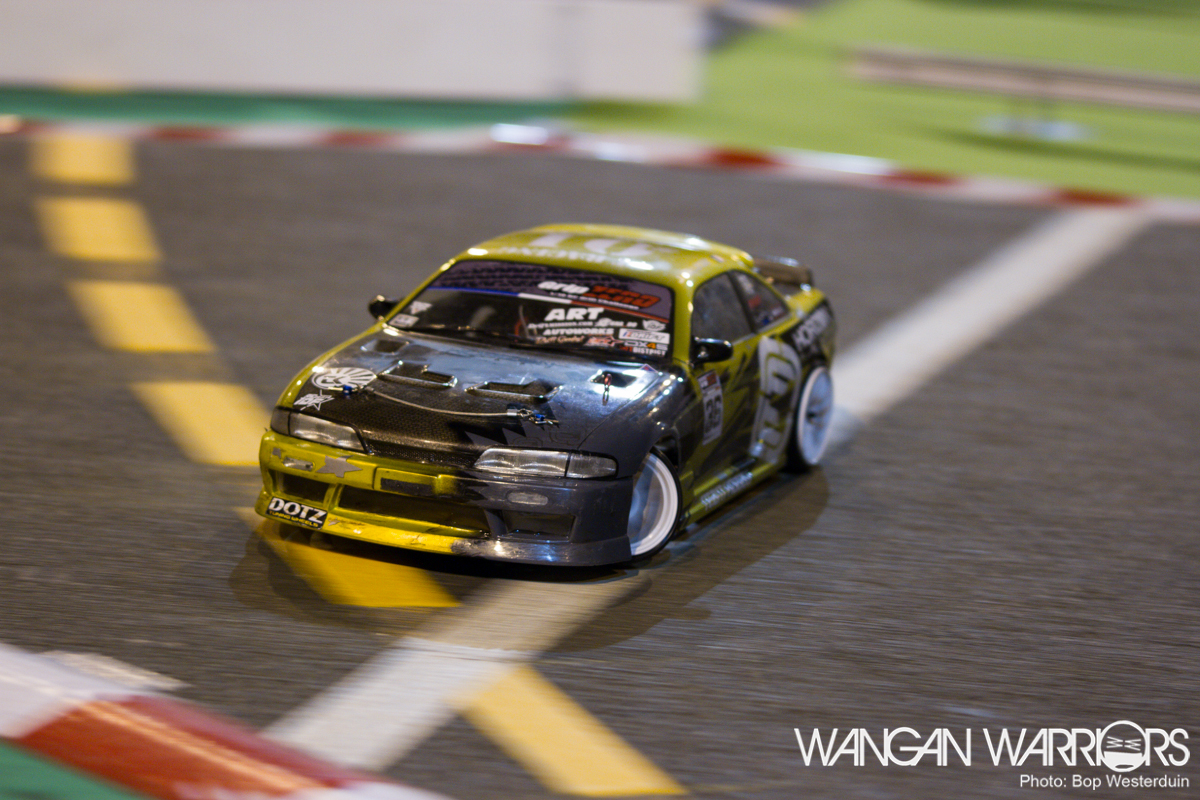 The concept behind RC drifting is to replicate the real thing as much as possible. Line, angle, style and the amount that you “counter steer” (again trying to mimick the real thing) are important factors both during and outside of the competition. 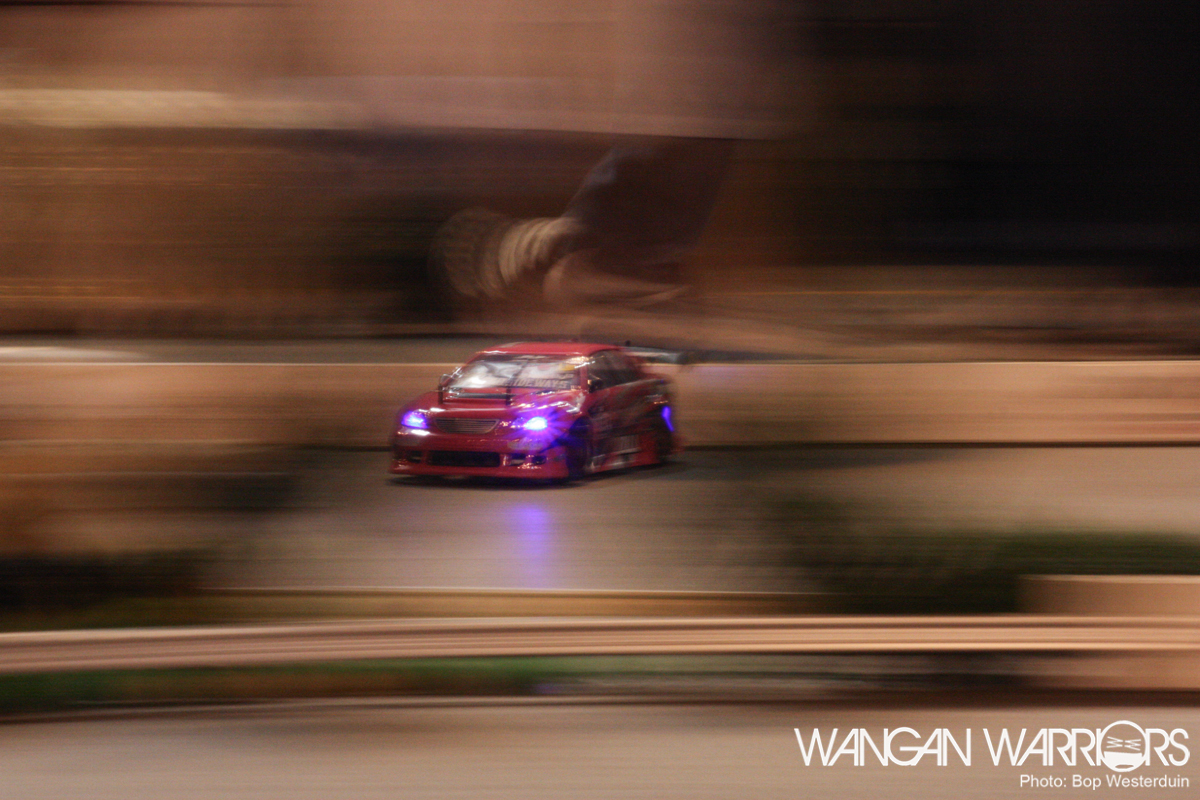 The people competing in the national- and international championships take their driving quite seriously and spend a lot of time trying to find the perfect setup and line on the track. That doesn’t stop them from doing backwards entries though as the slow-shutter-panningshot above shows! 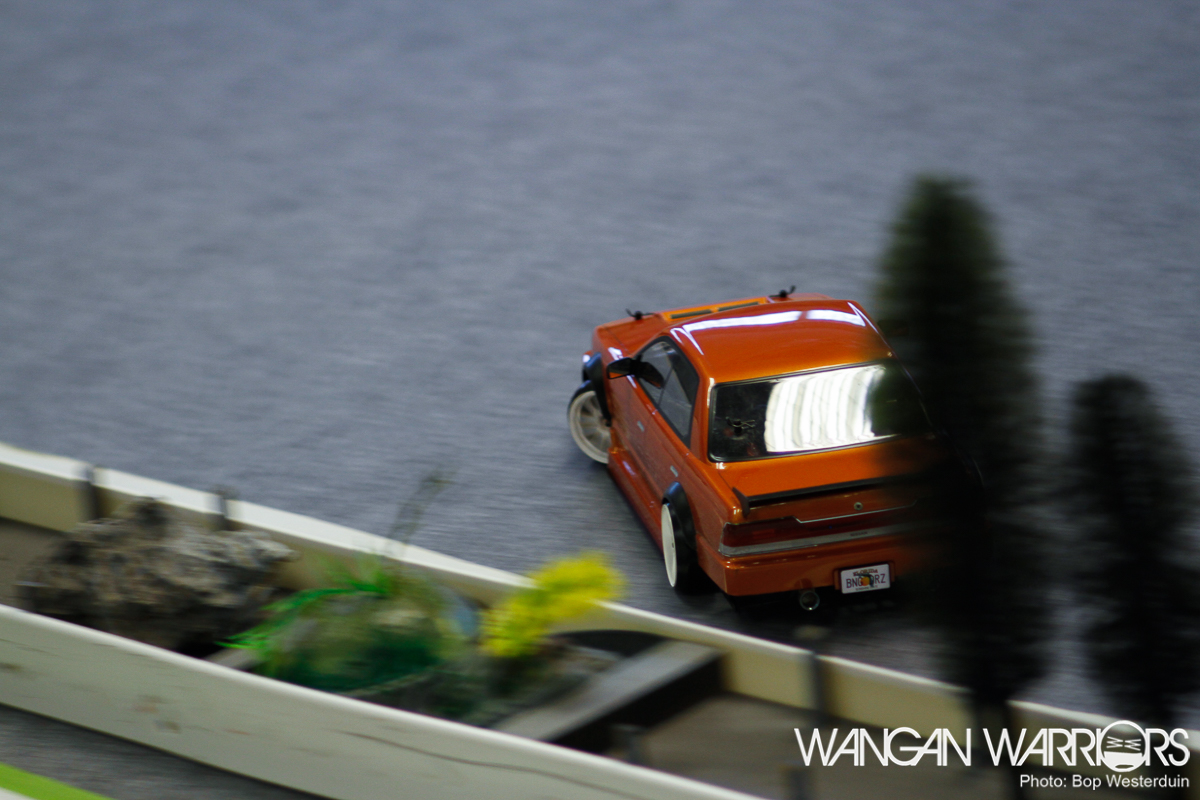 Next to the line, angle and style of the drift there is also an ever growing focus on technique. Just like in real drifting; the way that you initiate the drift(handbrake vs. clutchkick) is very dependant on the driving style and there are many possible ways to do it. The land of the rising sun remains the country with the largest RC drift community so new driving and setup techniques can often be found on Japanese blogs like Ameblo. The rest of the world is slowly catching on but the most advanced techniques are still coming out of Japan. 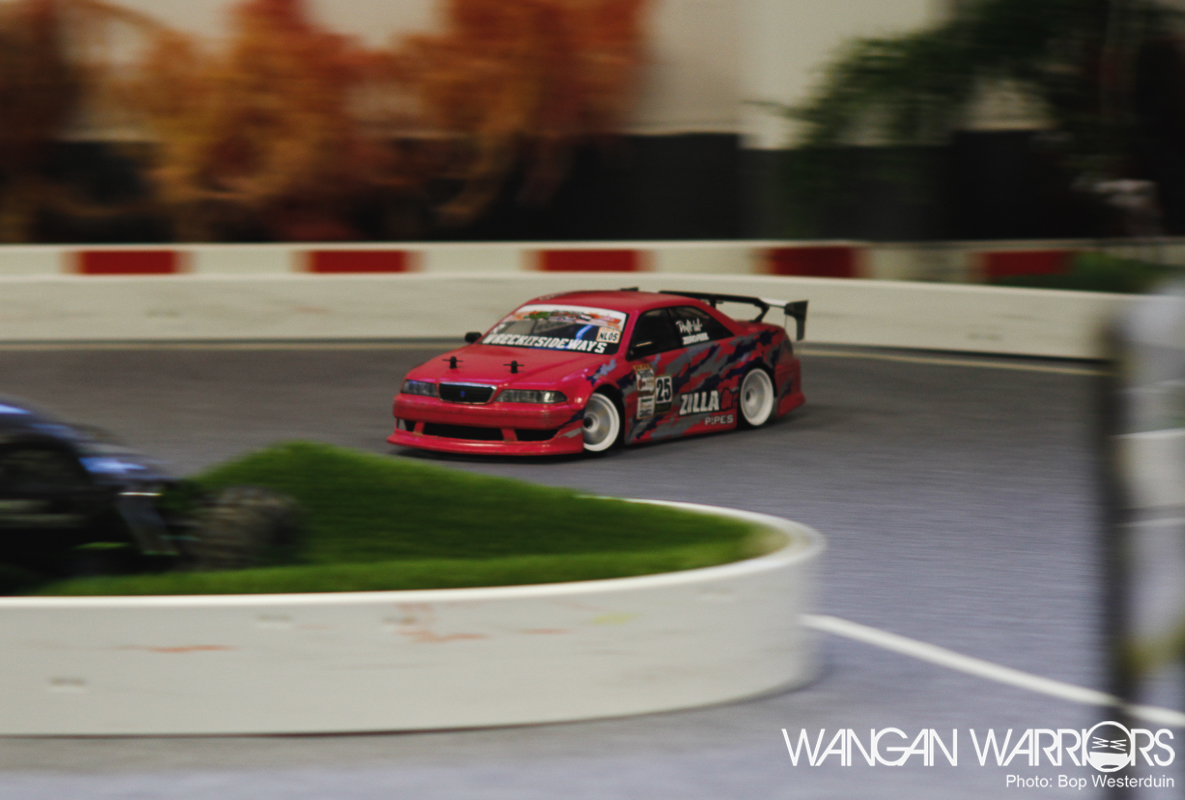 The Japanese have proven time and again to be the world champions in the RC drifting world and there are even a few drivers that make a living flying all over the world and competing in local championships! There is however one shop here on the European front that have helped the sport progress a lot, and that is SoulRC, which is where I went a few weeks after Grip Zero. 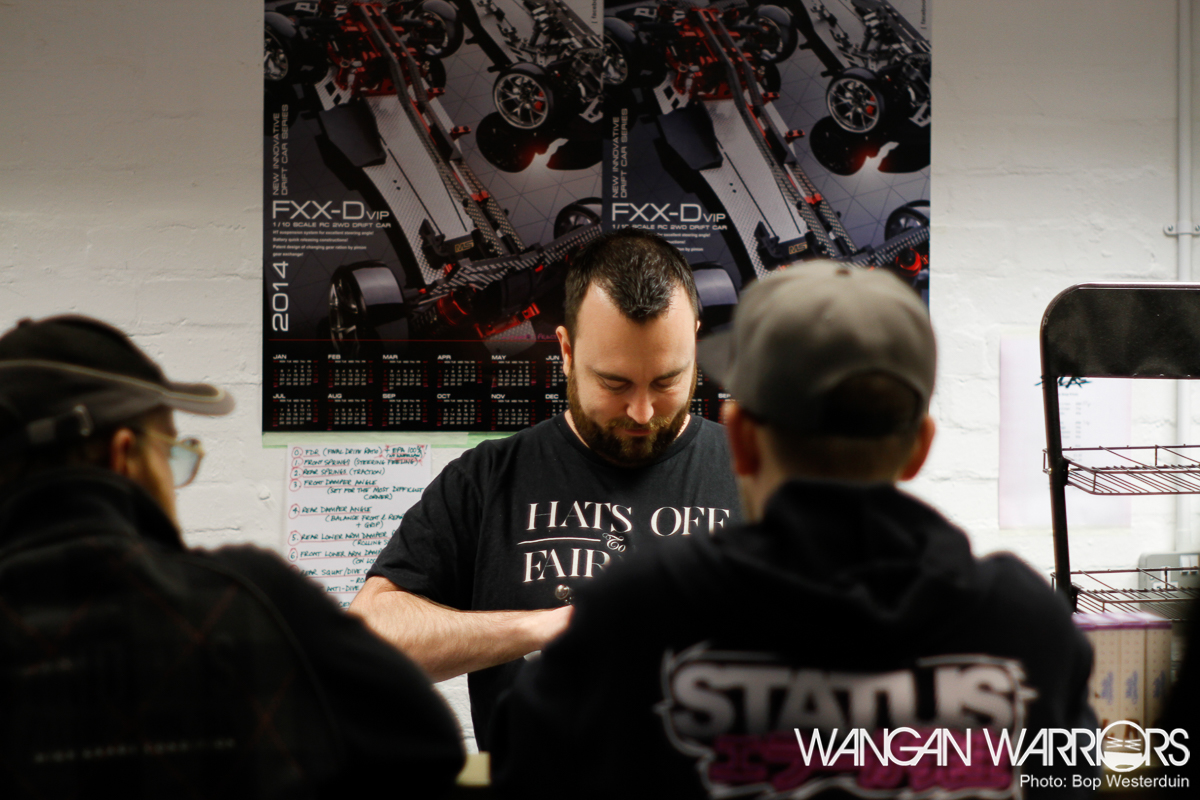 SoulRC is ran by two devoted gentlemen; James(pictured) who is mostly in charge of the shop and circuit and Mitto (also known as “that-ginger-gnome-from-Outsiders”) who is the setup and bodyshell guru. Together they run a shop and circuit as well as the monthly competition, and they are eager to assist newcomers with the choice of chassis, tires and basic setup. 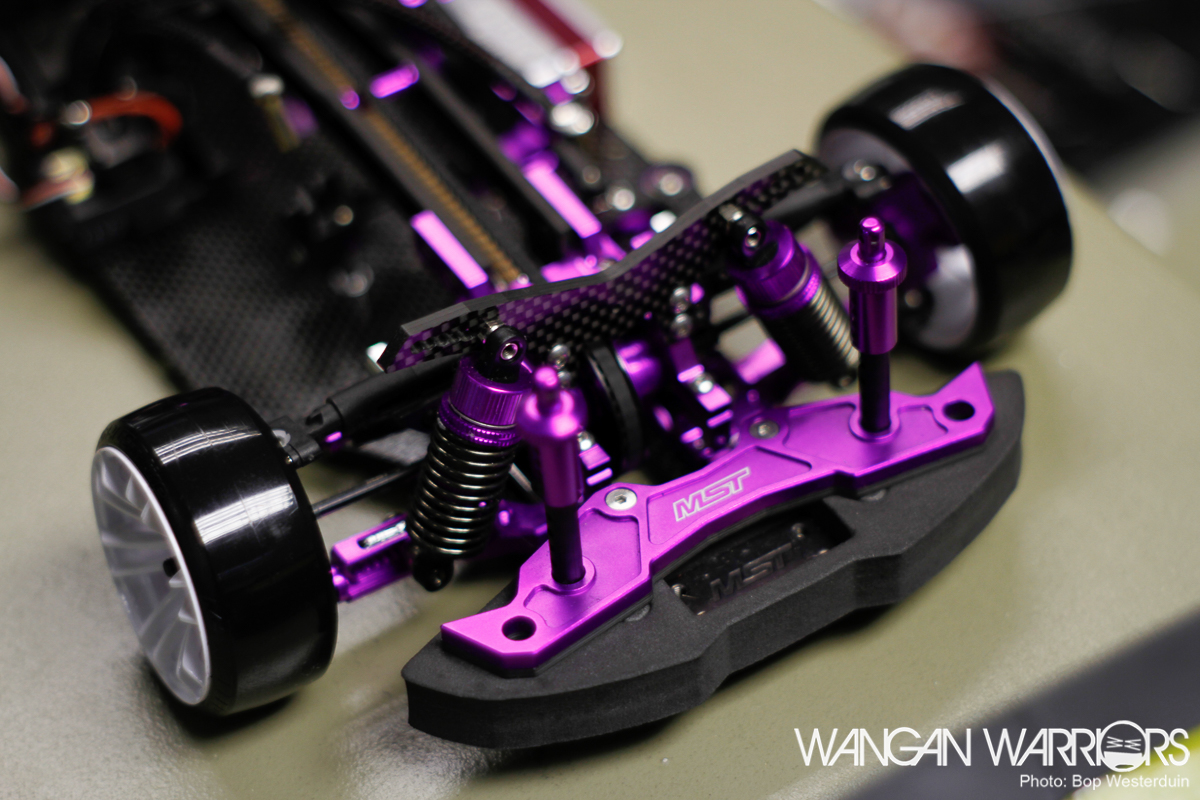 Speaking of chassis; like I’ve mentioned earlier the materials used in these chassis are very high tech and there are a lot adjustabilty options on them. For example: how about adjustable camber, caster, toe, track width, scrub radius and ackermann to name a few. The shocks are adjustable similar to top of the line coilovers from companies like KW or TEIN. Depending on the surface there are various tires and compounds that can be ran, each with their own pros and cons. 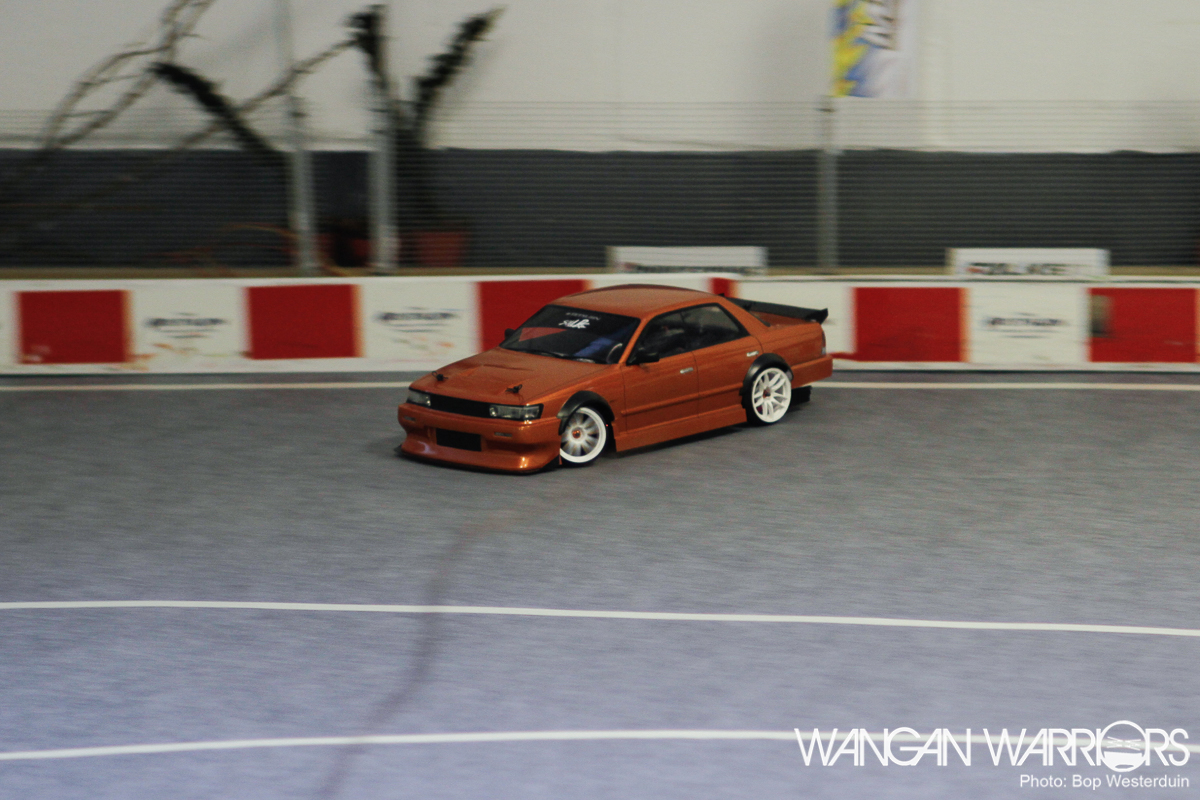 Then there is always the option to personalise your gear even more by buying addons for your shell, chassis or transmitter from the many aftermarket companies. Major Japanese tuning brands like Vertex, WELD/Overdose, Uras, R31House and Kazama all have their own RC departement next to their regular tuning catalogue, and Yokomo(one of the biggest RC brands in the world) is one of the main sponsors for the D1GP and D1SL series. As you can see, the link between what happens in the “real” world and what happens in 1/10th scale is quite clear. There are many companies that cater to both worlds, and next to styling there are also many similarities between the real and RC car culture. 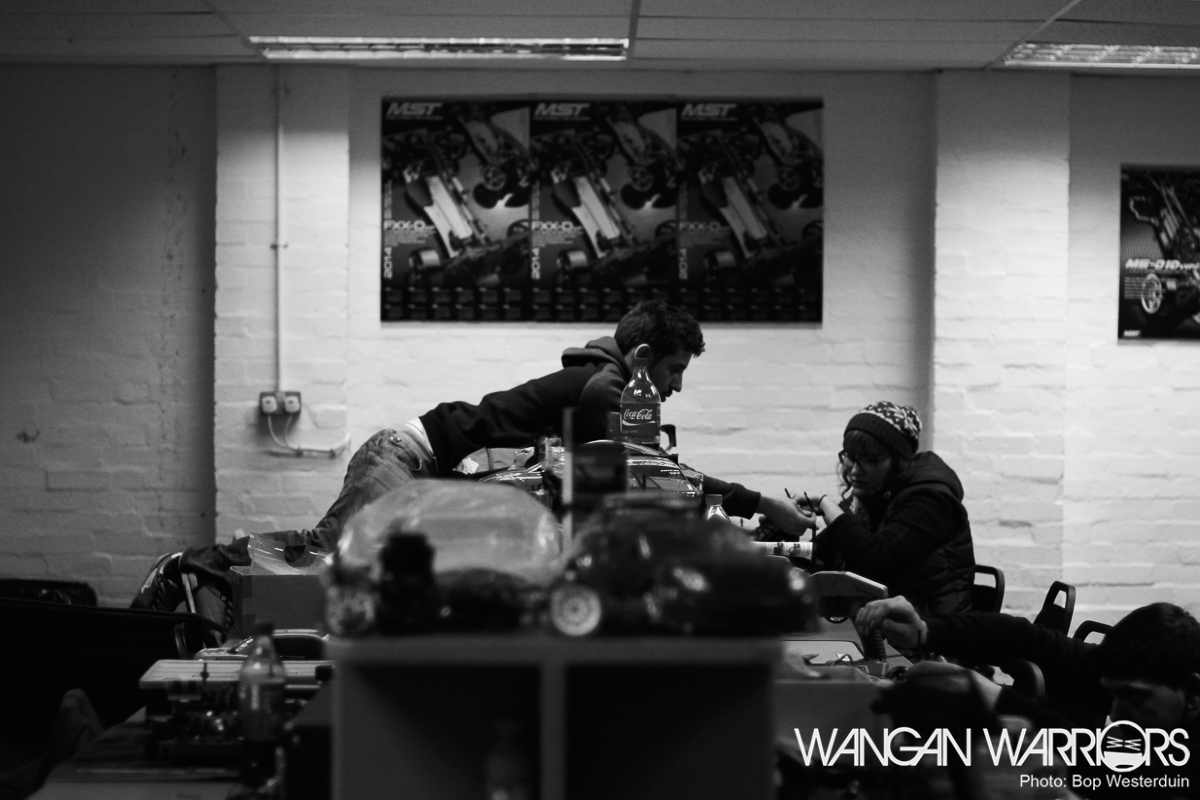 Having spent a fair amount of time walking different paddocks in Europe I can honestly say the drifters, both RC and real, are an odd bunch. When they are on track doing tsuiso battles they are 100% serious but the second the competition is over everyone seems to be best buddies. There is a sense of comraderie that I haven’t seen that often in other forms of (motor)sports but it is something that I really enjoy being part of. If something is broken there are always people willing to lend a hand, tools or parts to try and fix it in time. 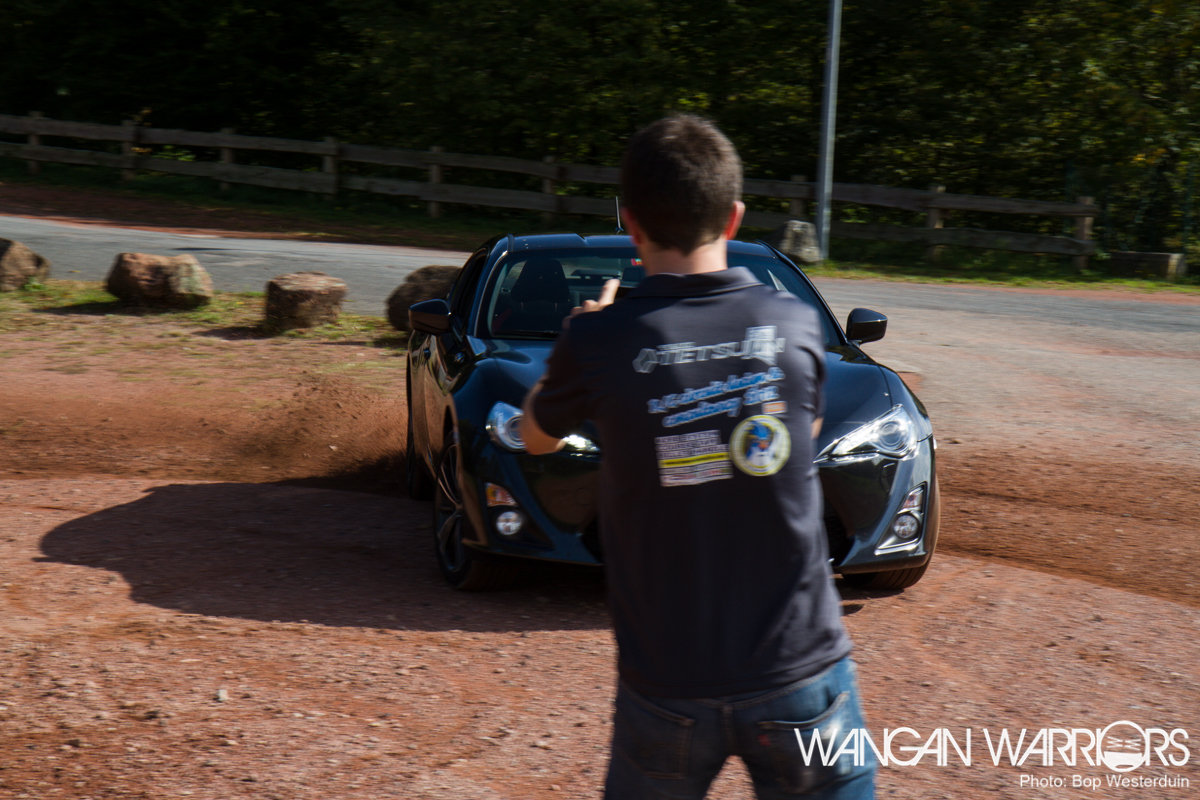 Over the years myself and many of my RC collegues have progressed into real cars, yet somehow every now and then the bug bites again and we dig out our gear. Going on a roadtrip to Grip Zero or SoulRC can be a good excuse to catch up with some old friends and spend some time away from things. 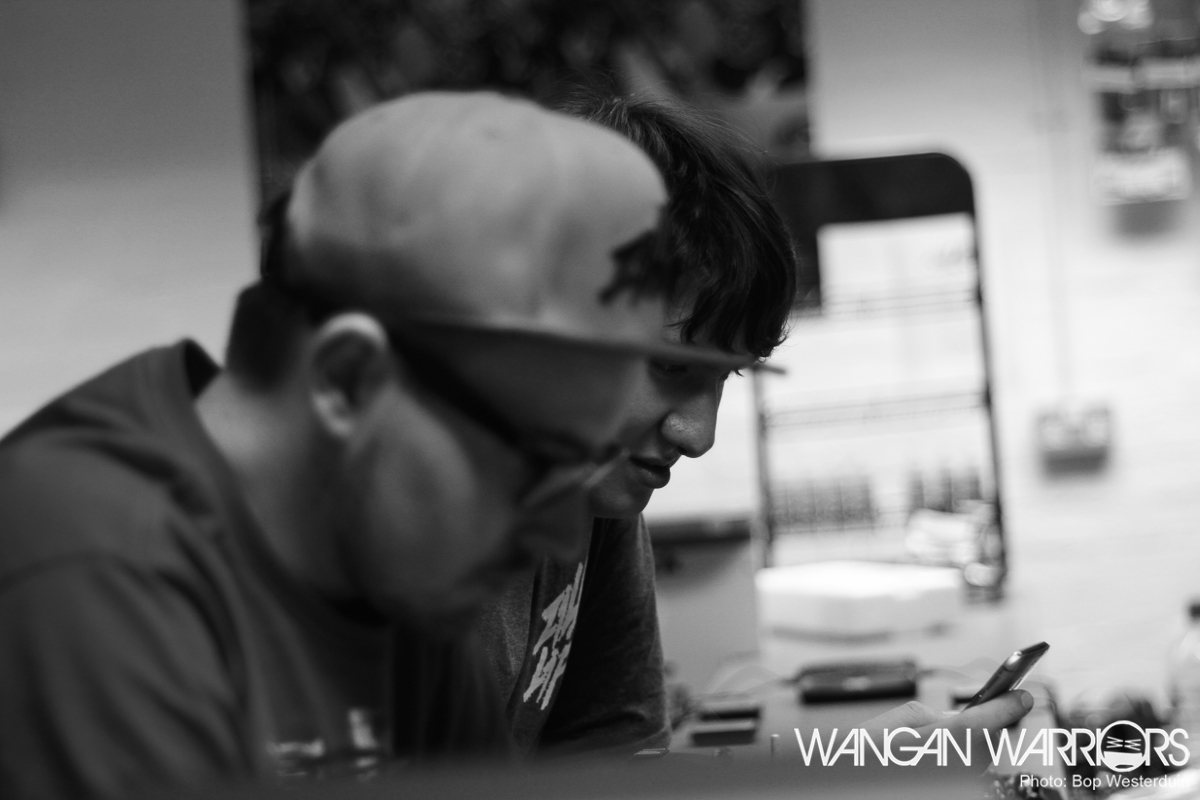 Because of RC drifting I’ve met a lot of people that share the same love for cars as I do, and I’m very happy to call many of them my friends. RC drifting has been my gateway into this addicting petrol-fueled world of cars, and I know for a fact that I’m not the only one who got here this way. 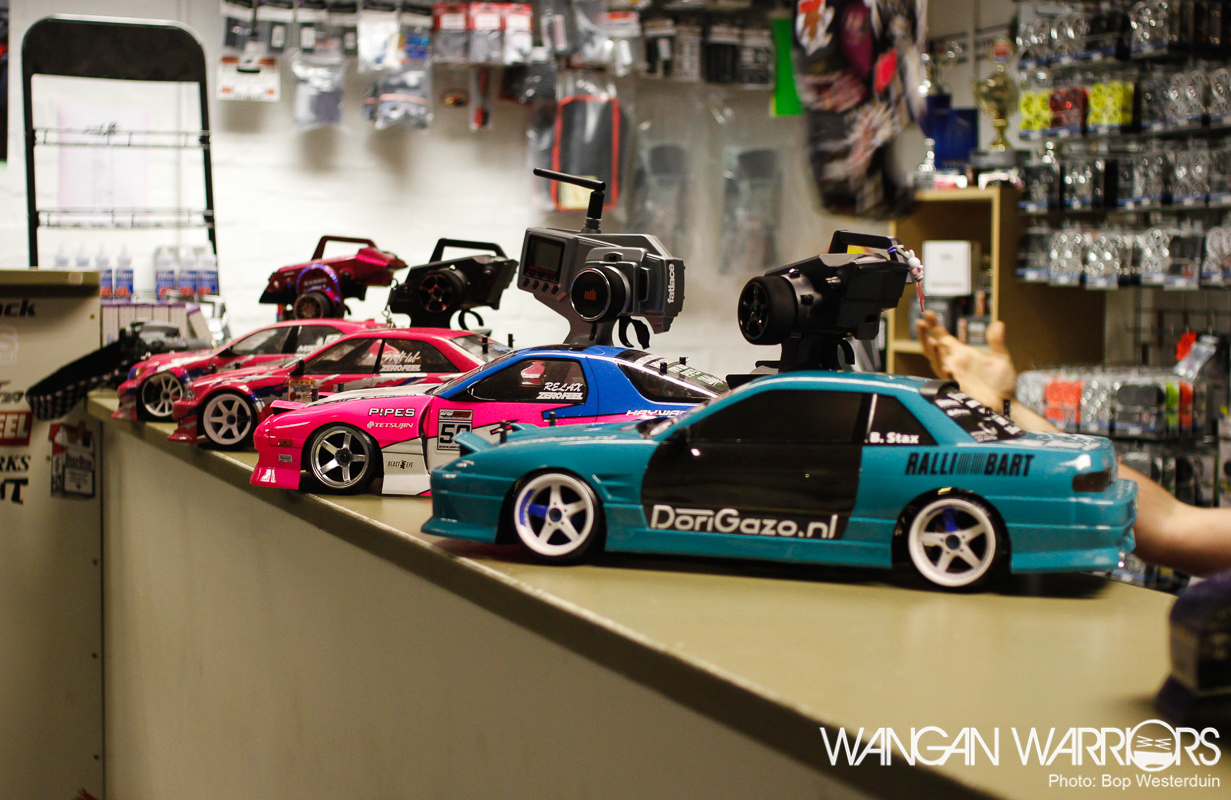 Whether you see it as a pastime or as a creative outlet, if you like drifting or making cars look badass: the 1/10th world might be something for you. It can give you the satisfaction of creating something from scratch without breaking the bank, and if you don’t fancy doing competitions you can always make a replica of your real car so you can look at your car whilst you look at your car.

The thing that tops my to-do list in 2015 is visiting Japan. I’m planning on visiting a few contacts that I’ve made via the RC world, so I might do a follow up going more in-depth on this if anyone is interested. Until then, stay sideways!

If you want more info on the world of RC drifting, here are some shameless plugs:
Link to the SoulRC website
Me and my friends’ team page

(excuse the unsharpness of some pictures, I need to work on my manual focussing)