During the off-season, there’s always an event you see getting talked about and popping up on your News Feed every time you open Facebook, but it feels a lifetime away and you don’t want to get excited too early. Drift Allstars London was that event. Some of the best cars and drivers Europe has to offer bundled into a street track. What more could you ask for? Glorious weather? Yeah it had that too.

It’s not often I have an event fairly close to me, so I thought I’d take the opportunity to give the car a rest and take the alternative option – public transport. After leaving early for the media briefing on Saturday, it soon became apparent why I usually opt to drive. Pulling up to the station three hours late due to “technical problems” is not the best start to any weekend, especially this one!

Upon arriving at Stratford and having little to see other than an insanely large shopping centre, it quickly became apparent this was going to be a special weekend. Amongst the shoppers there was something that stood out – the sound of roaring engines and a huge cloud of tyre smoke in the background. 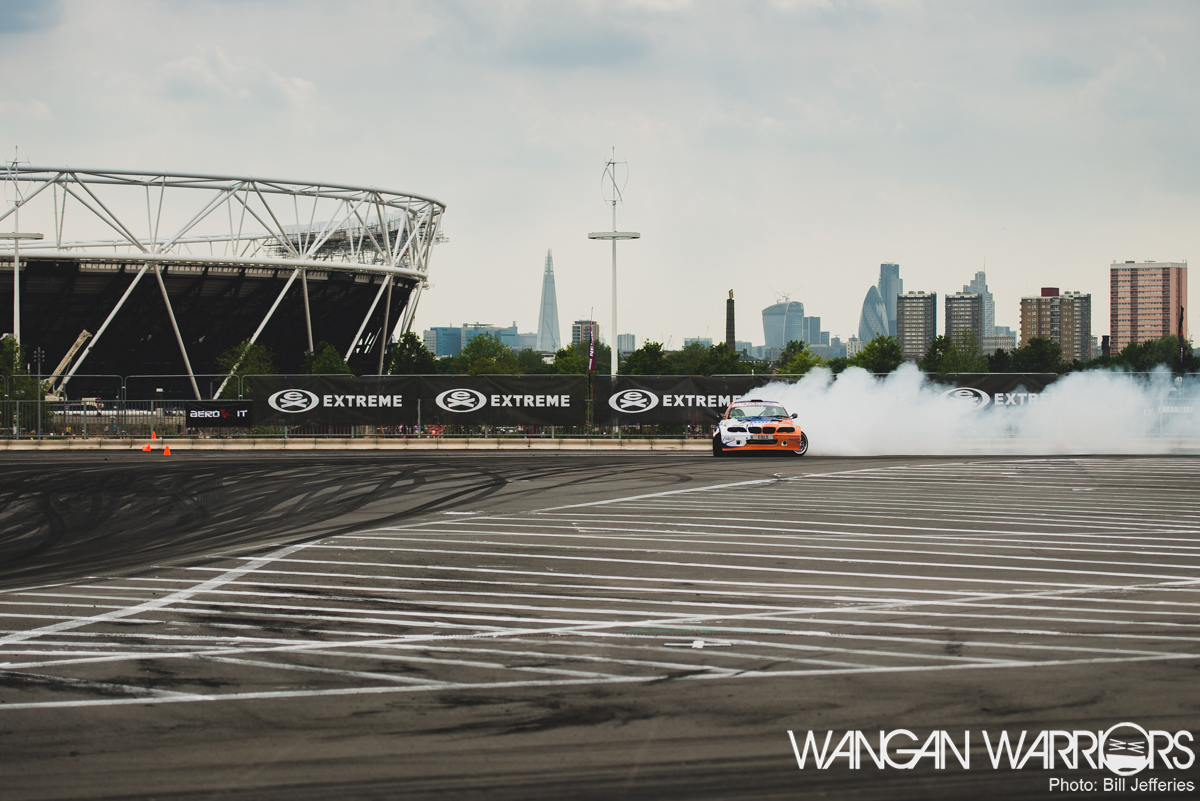 Once the smoke had settled, it was my first glimpse of the incredible backdrop for the event.. It’s certainly not every day that you get a view of the Olympic Stadium along with some of London’s finest and most iconic buildings at a drift event! 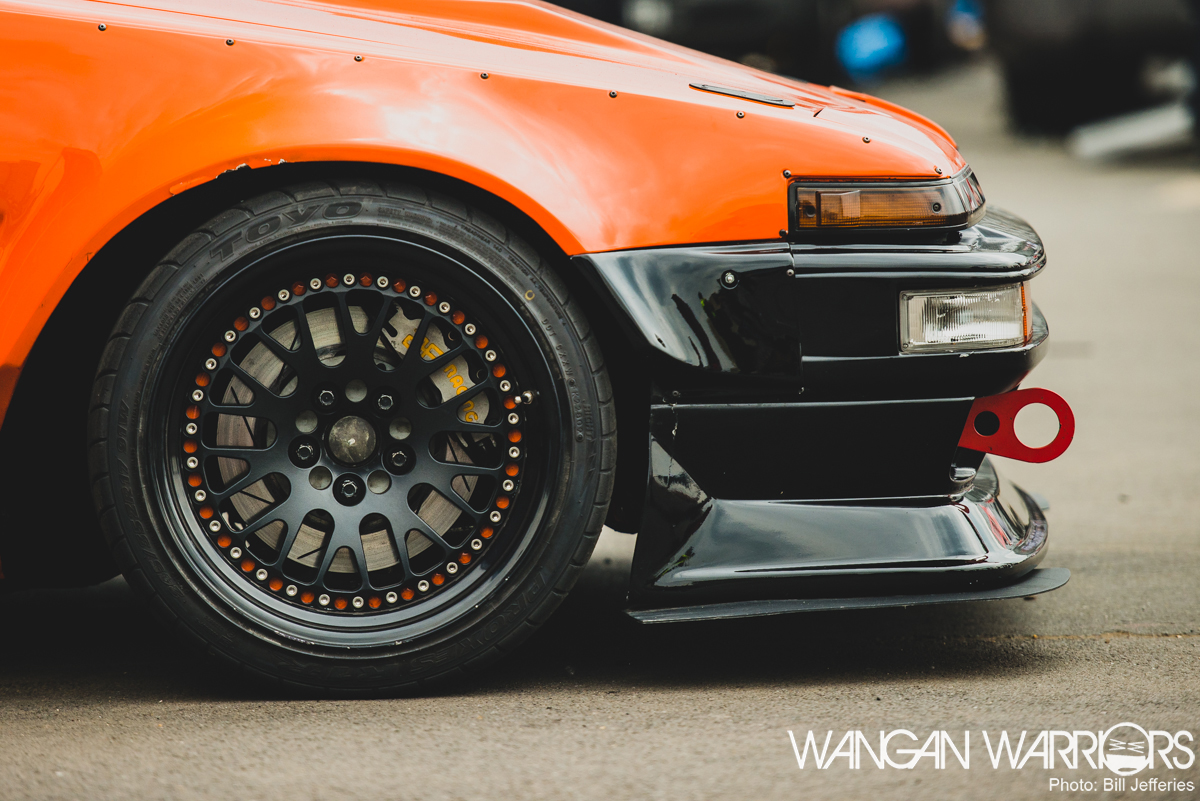 After sitting on a train sulking about missing out on the action for the last few hours, I was keen to get straight down to business. After witnessing the first few practice sessions, it didn’t take me long to see that this wasn’t going to be a normal event. In fact, it was going to be far from it. 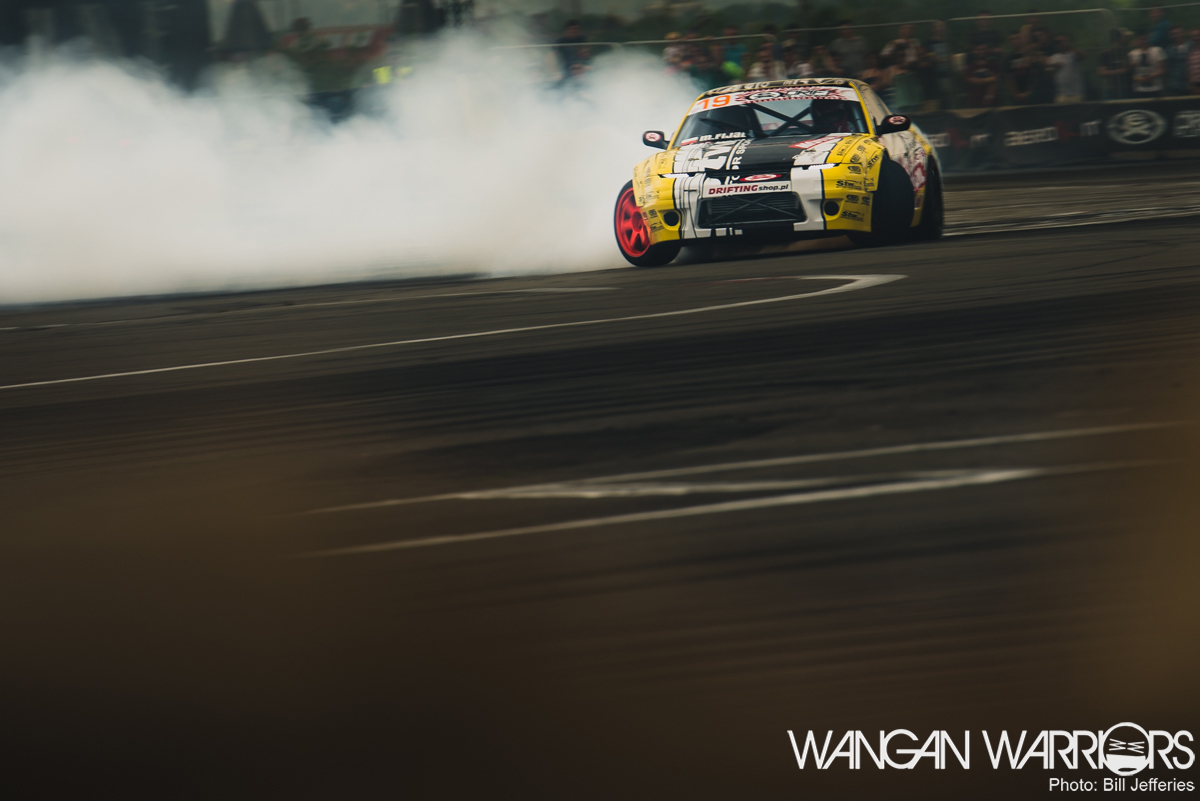 Having only previously shot at established race tracks, the contrast was huge. Gone were the silky smooth surfaces and in were the daily issues you’d have on a typical road. Drainage channels, manhole covers and solid concrete blocks forming the track were just a few of the obstacles that were going to turn this event into a whole different spectacle to the drifting that we’re used to witnessing in the UK. 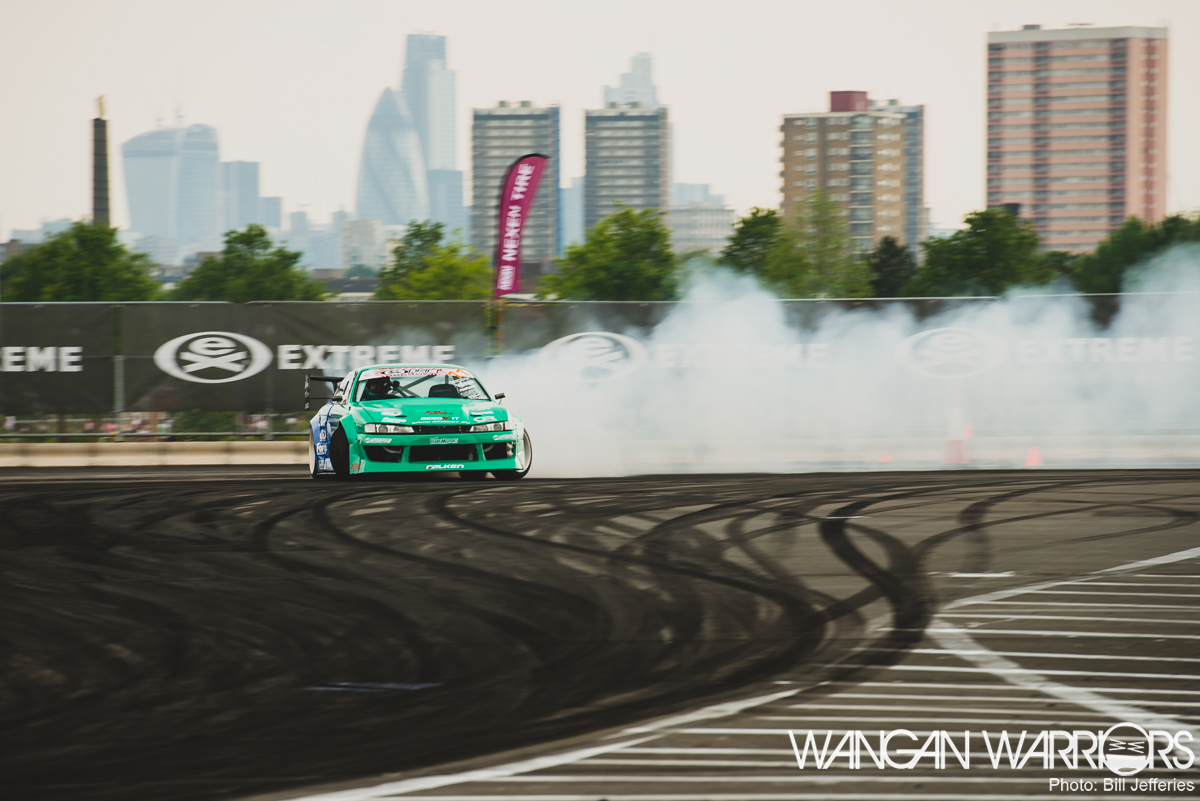 Another unusual part of  the event was the curved large entrance ramp leading to the start of the track. You might think that the drivers drove up this ramp slowly before entering the track? Wrong! They launched onto the track at full-throttle, sometimes with all four wheels off the ground before immediately initiating into the first corner in full attack mode. If that wasn’t challenging enough they were then confronted by huge concrete slabs that were to become the curse of several drivers as the weekend continued. 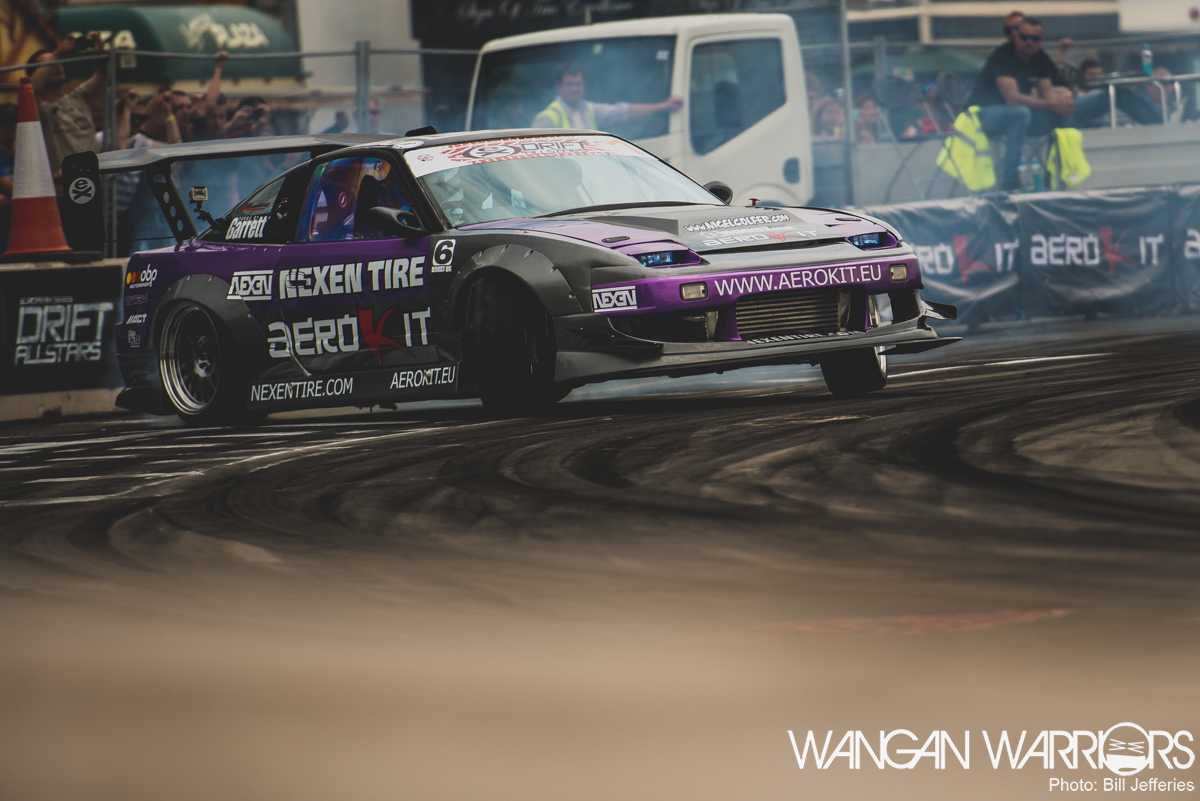 The remaining clipping points were no easier and were ensuring that the drivers were kept on their toes at all times, this didn’t stop them putting the power down and providing a show for the fans. 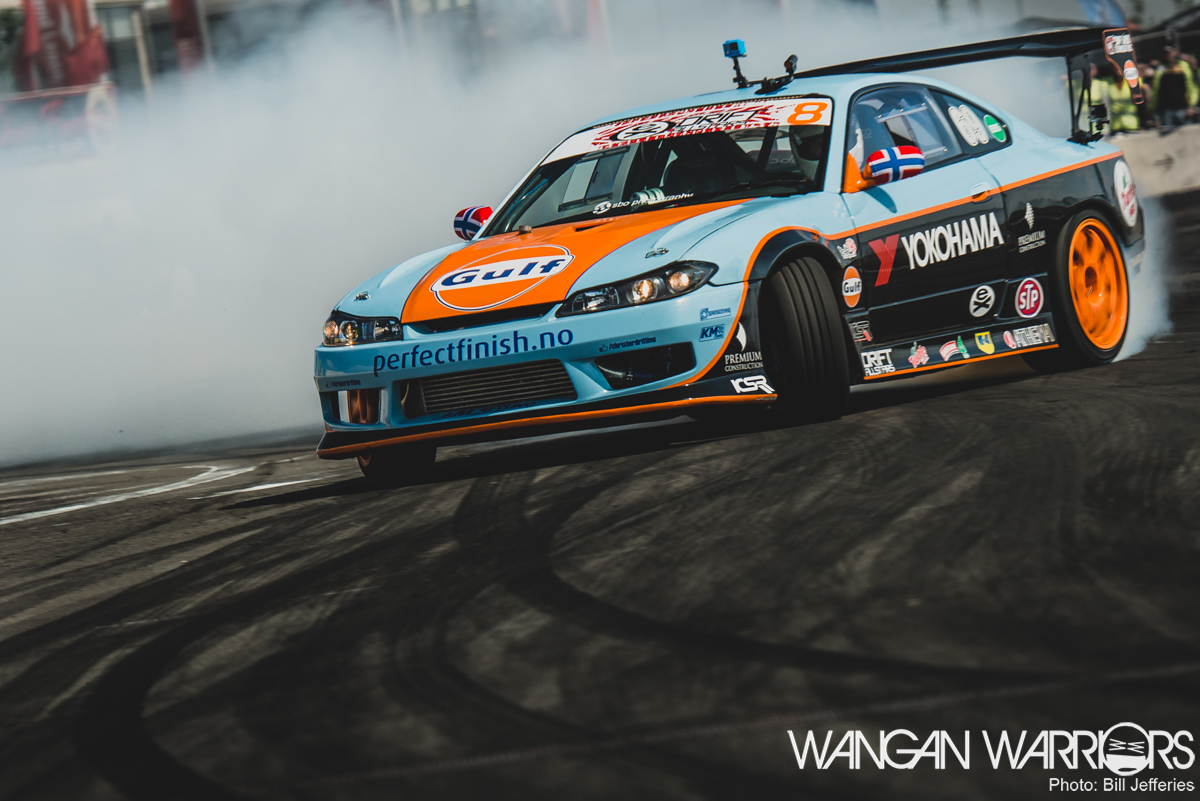 It was great to see some of the cars that I’d only ever been able to admire in videos online, a moment I remember in particular was seeing Christer Halvorsen screaming out from the paddock! 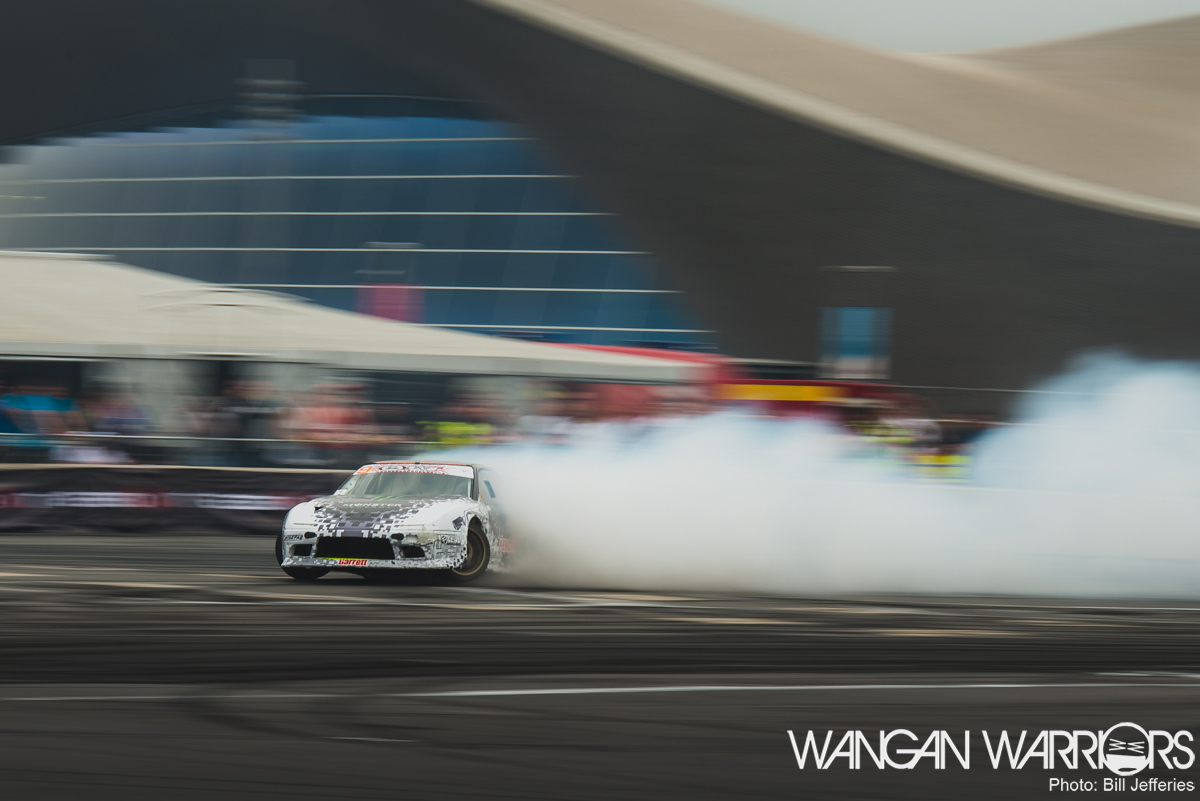 Another driver I had seen a lot of coverage on was Dmitriy Illyuk. His S13 was one of the best looking cars out there and he was definitely a driver to keep an eye on throughout the weekend. 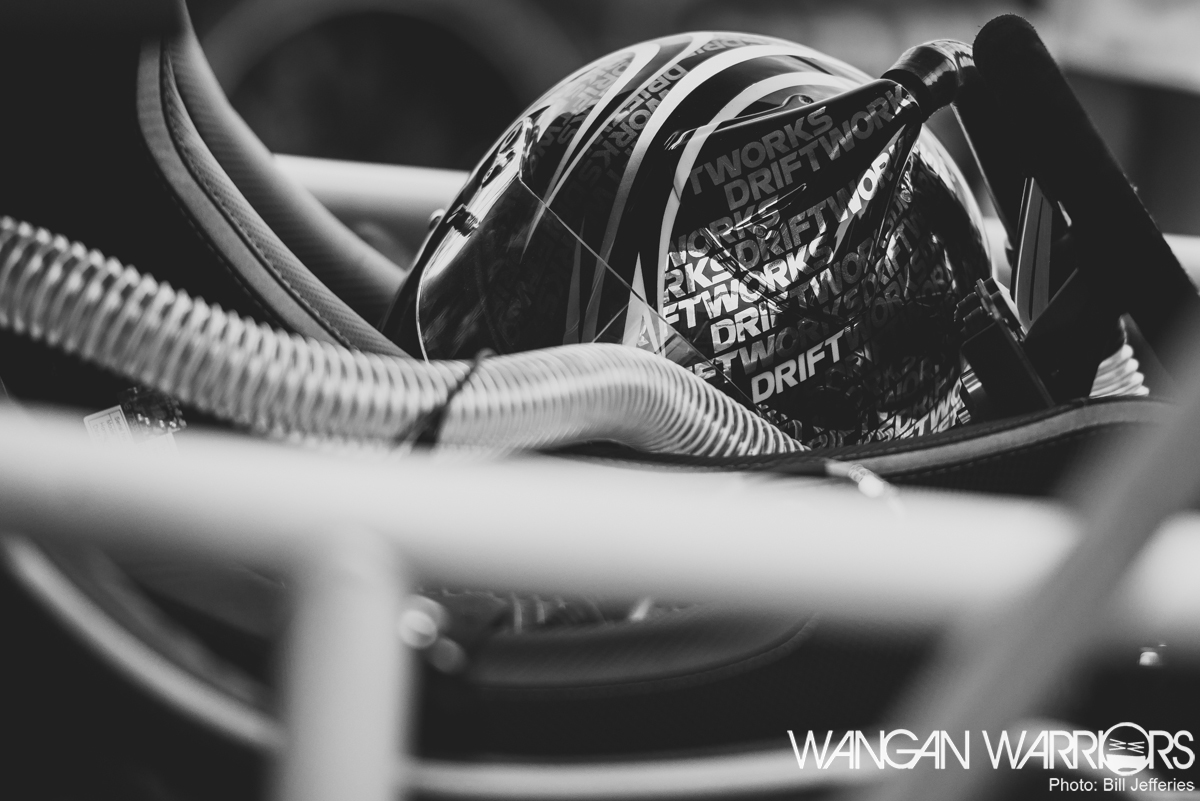 I was becoming increasingly impressed by the level of driving as the day continued and it was great to see the DW86 on a track where it could be released to its full potential. Sadly after the final practice run of the day, the Driftworks crew encountered another teething issue as a result of mechanical failure. This would sadly make for an early exit again for an understandably gutted Phil Morrison. 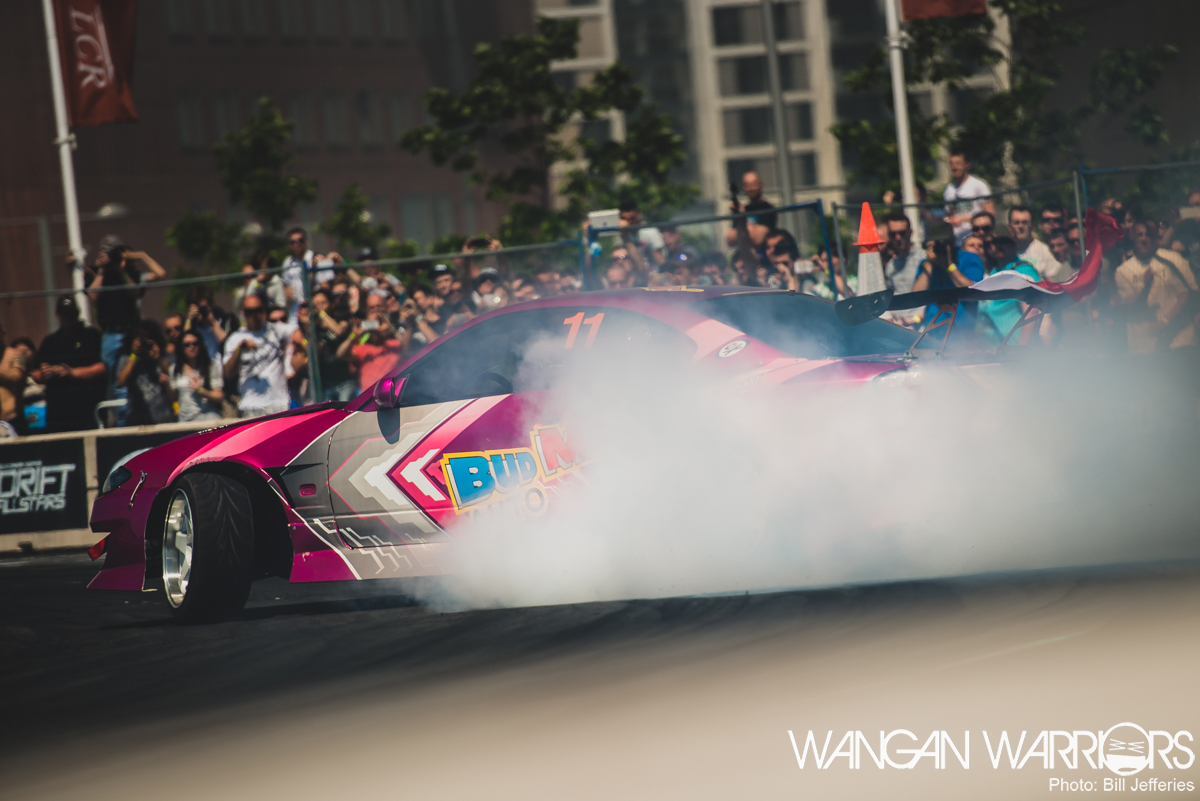 After enjoying a fantastic first day it was time to venture home, a humid day combined with some of the biggest smoke trails I’ve ever witnessed meant that I was covered in enough rubber to make a new set of tyres. It certainly got me a few strange glances on the train journey back! 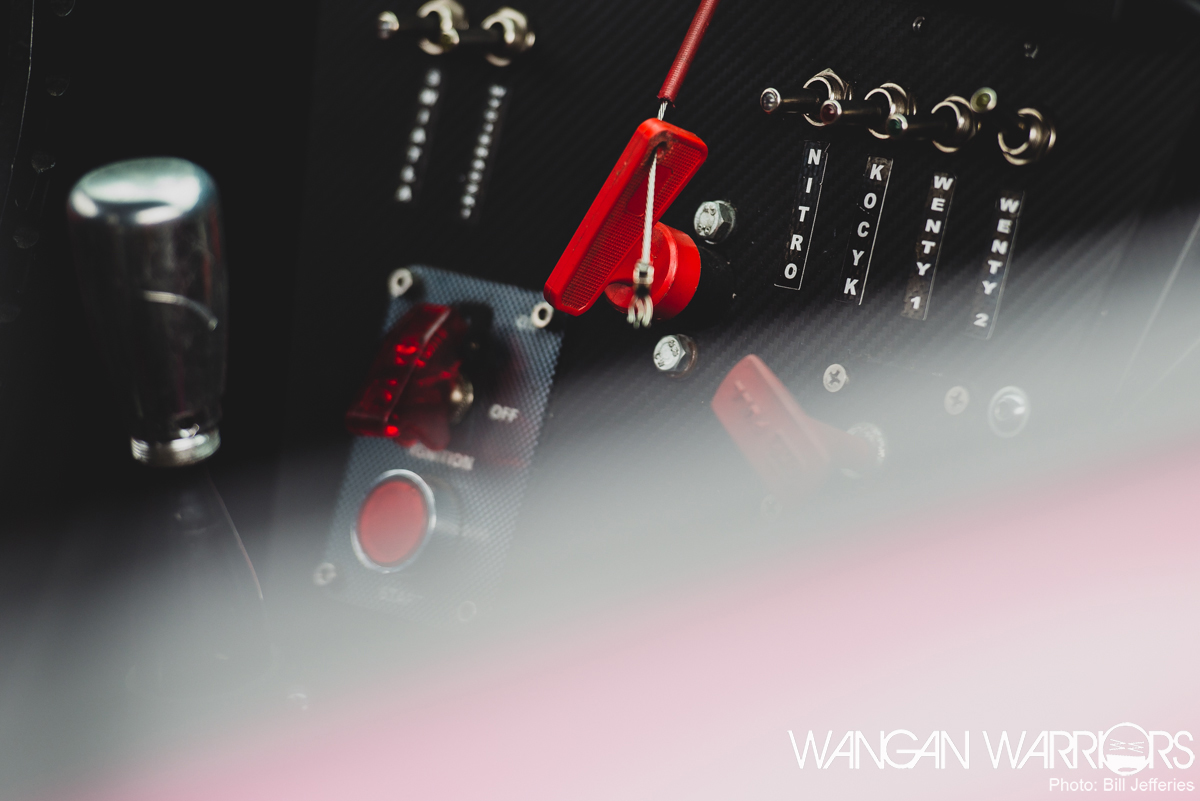 Early mornings are more than welcomed when it comes to events like this. I headed straight back to the track on Sunday, leaving extra early to avoid the delays from the day before. 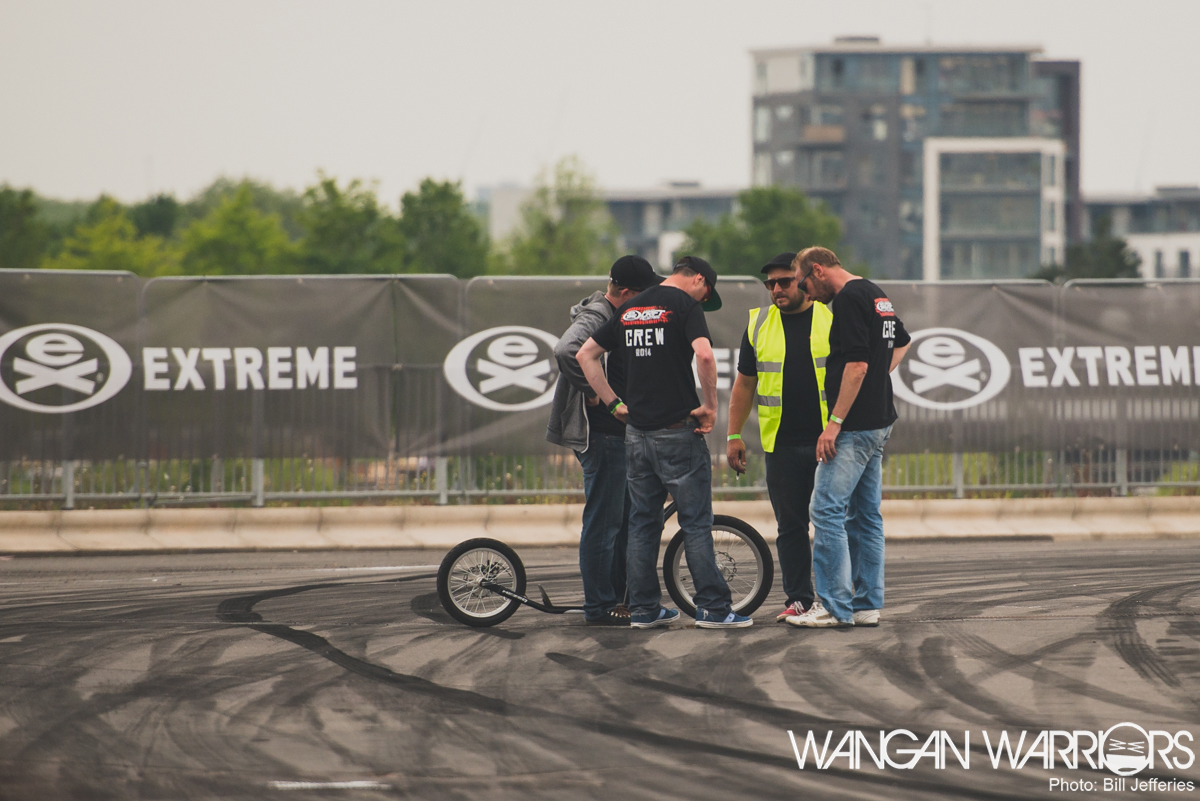 Day two began with a track inspection. It’s not every event that you see extensive attention being paid to the surface of the track, but everything needed to be put right to ensure that the day went as smoothly as possible. 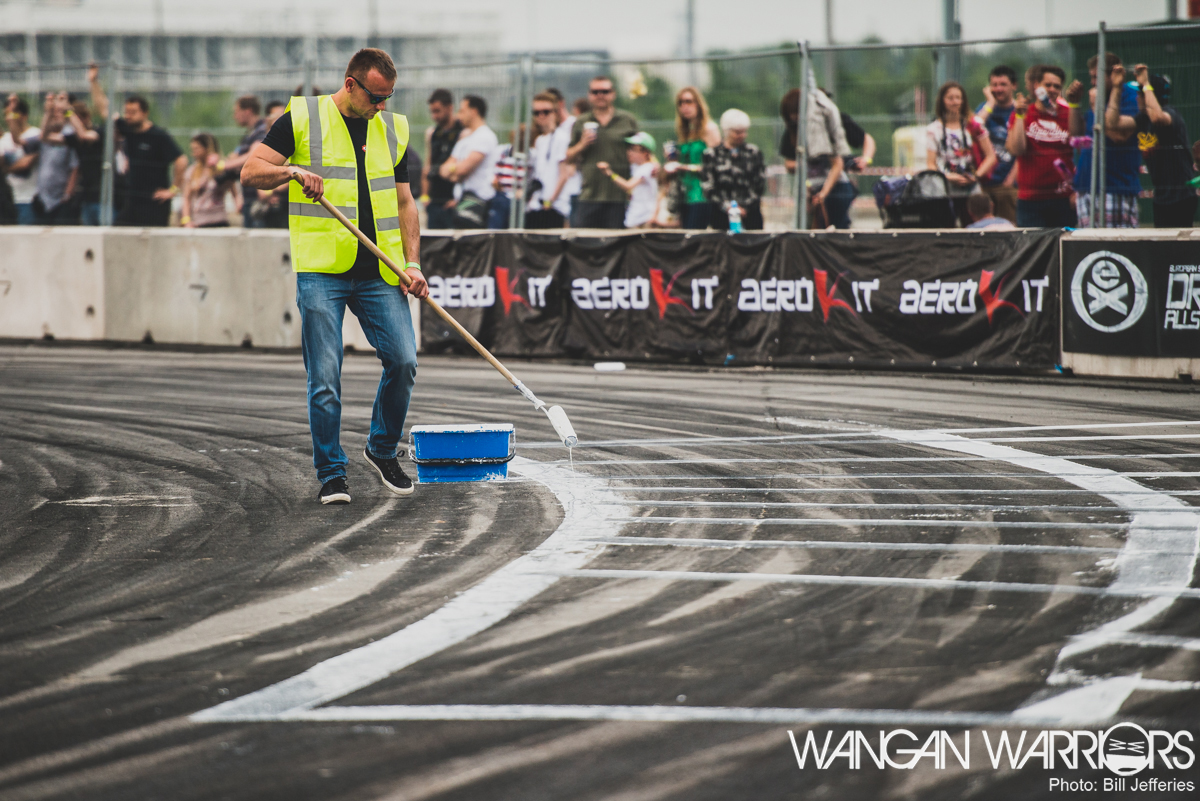 Final preparations went underway as the drivers began readying their cars for the day ahead. 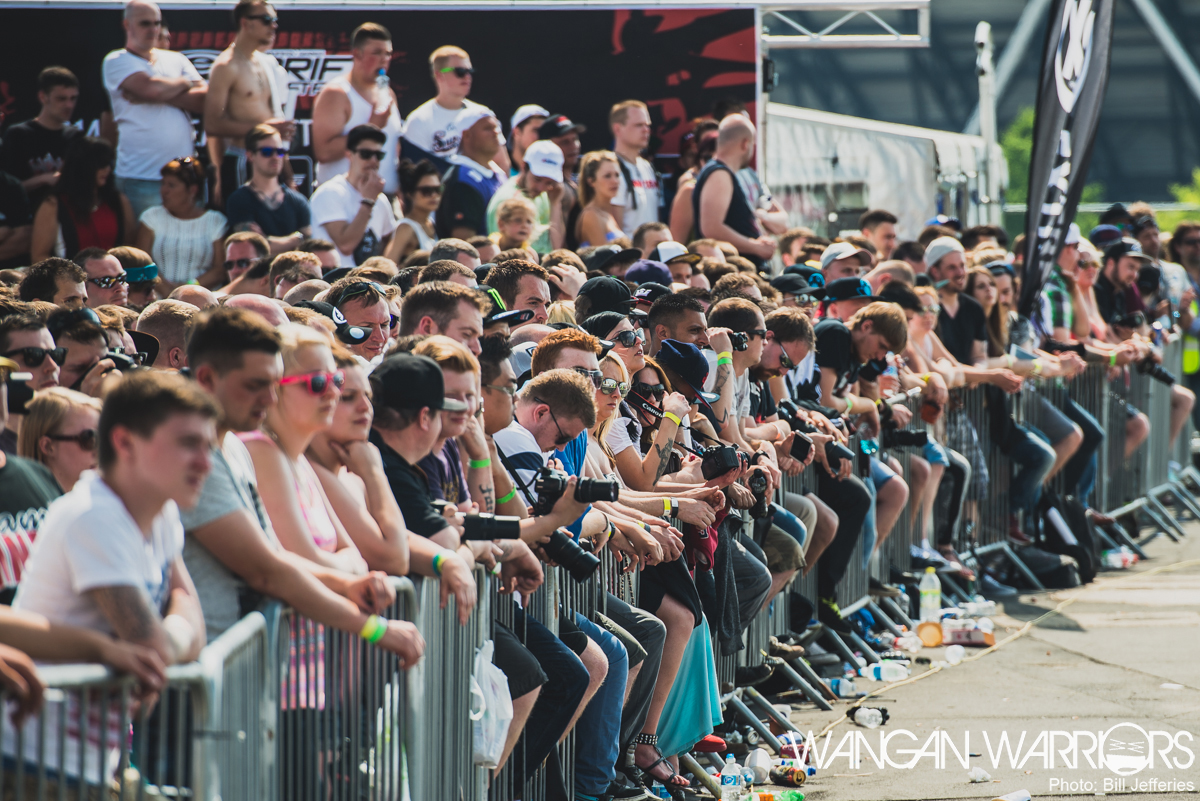 Weather conditions for the day were perfect, there was barely a cloud in the sky and the hot summer sun was beaming down on the spectators. 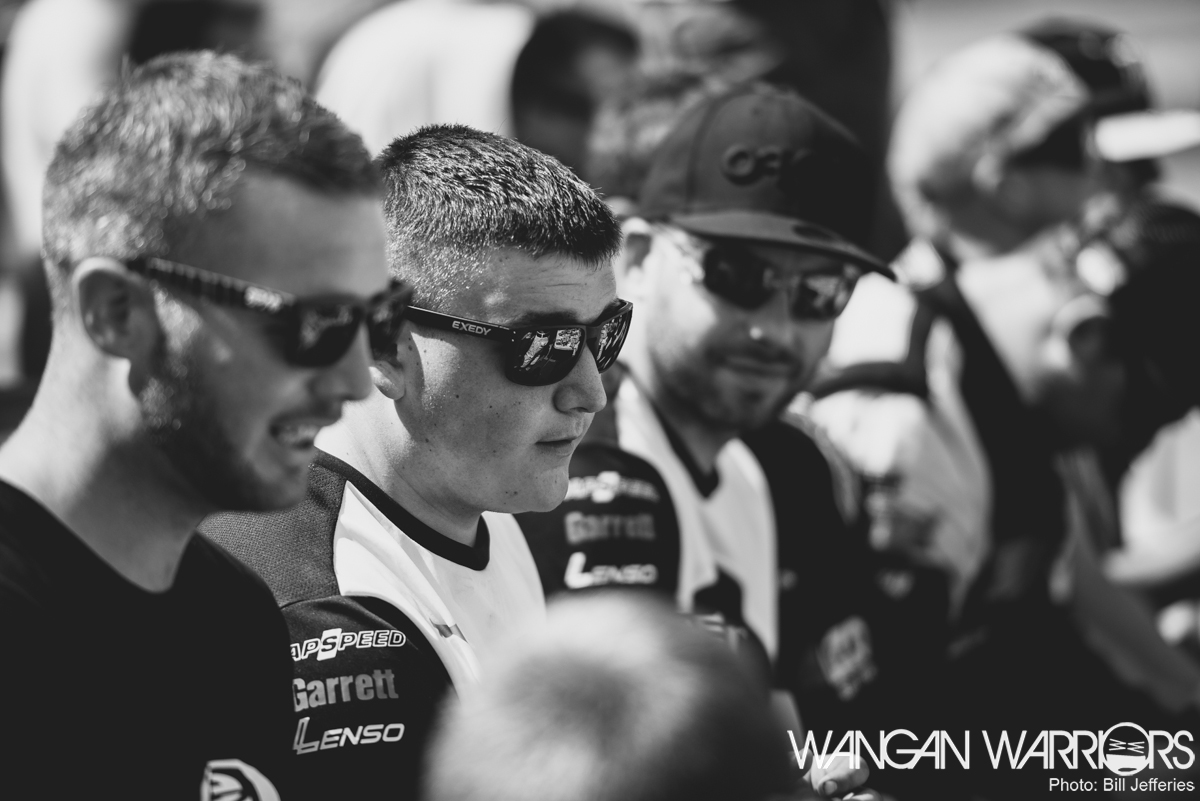 14 year-old Jack Shanahan was becoming a well-known face at the event after recently taking the win at BDC Round 1. 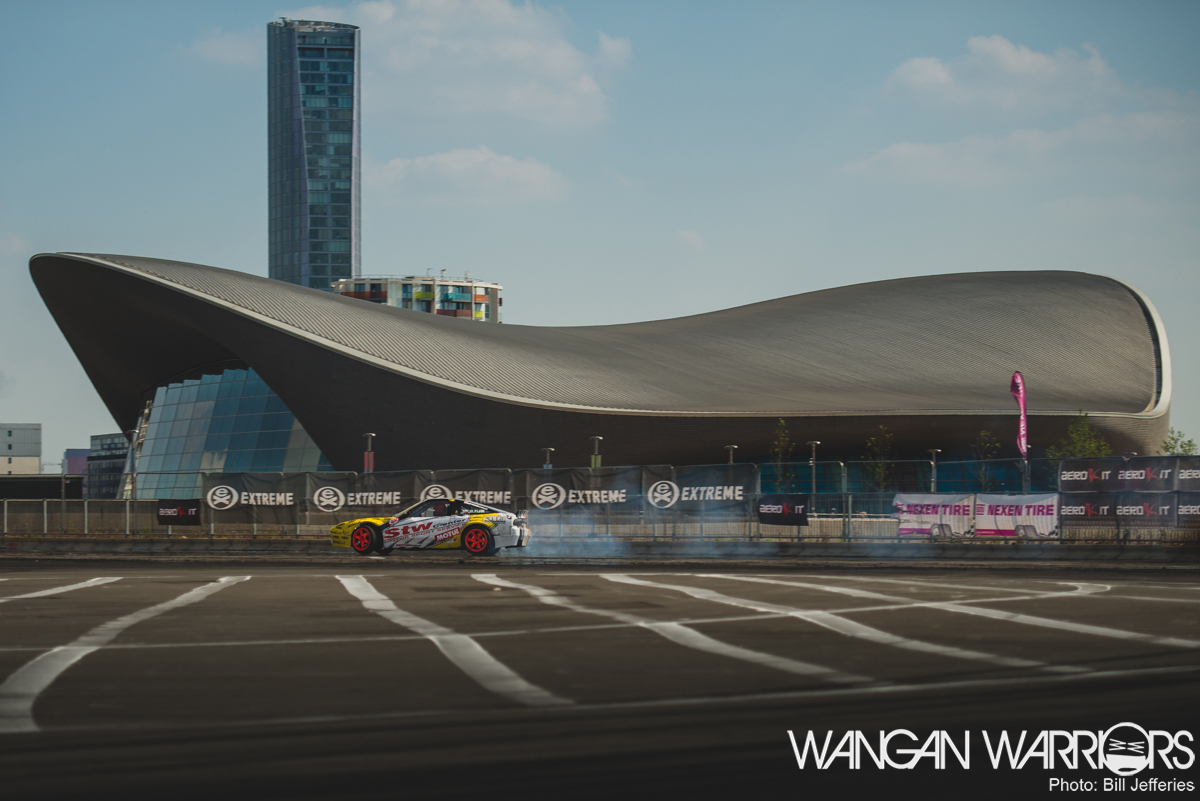 As the qualifiers started, some of the drivers were beginning to shine and there were some really impressive runs that showed just how high the level of driving is in this competition. 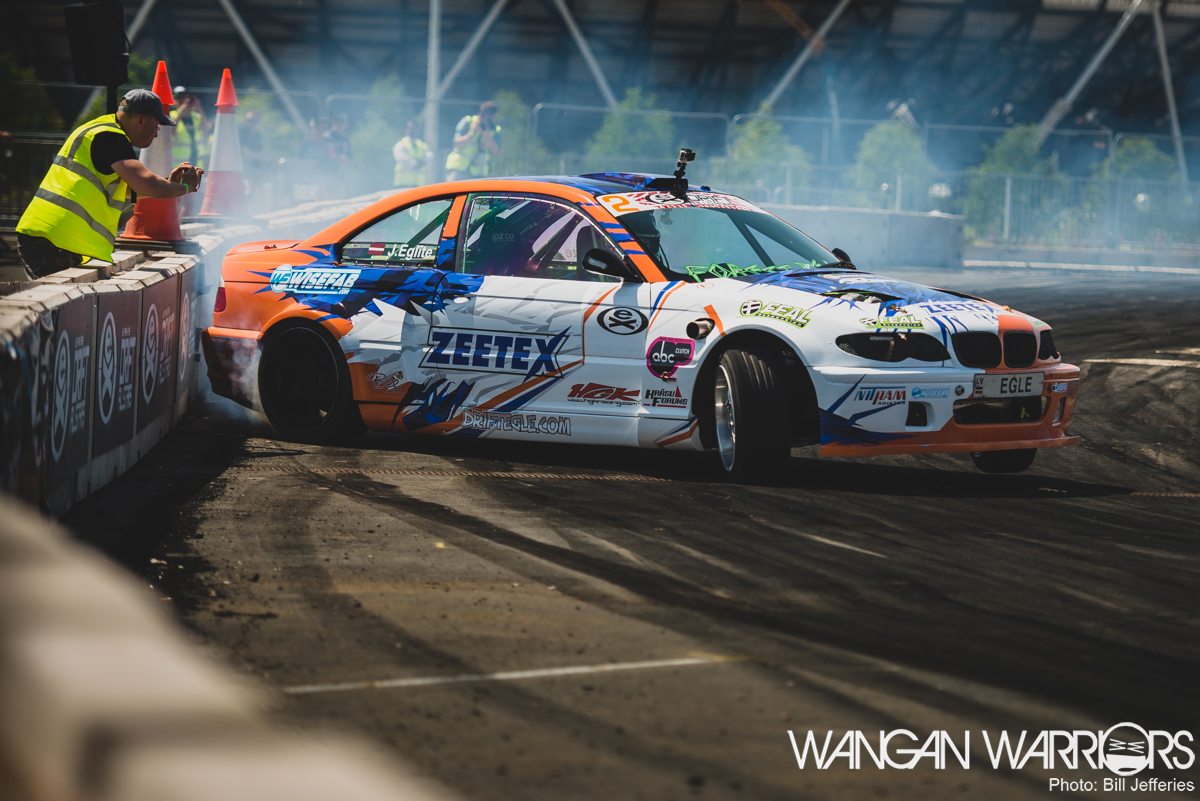 It was a chance for drivers to release their full potential and prove themselves to the judges. The concrete became seemingly irrelevant at times as they pulled off some of the most amazing driving I’ve witnessed to date. 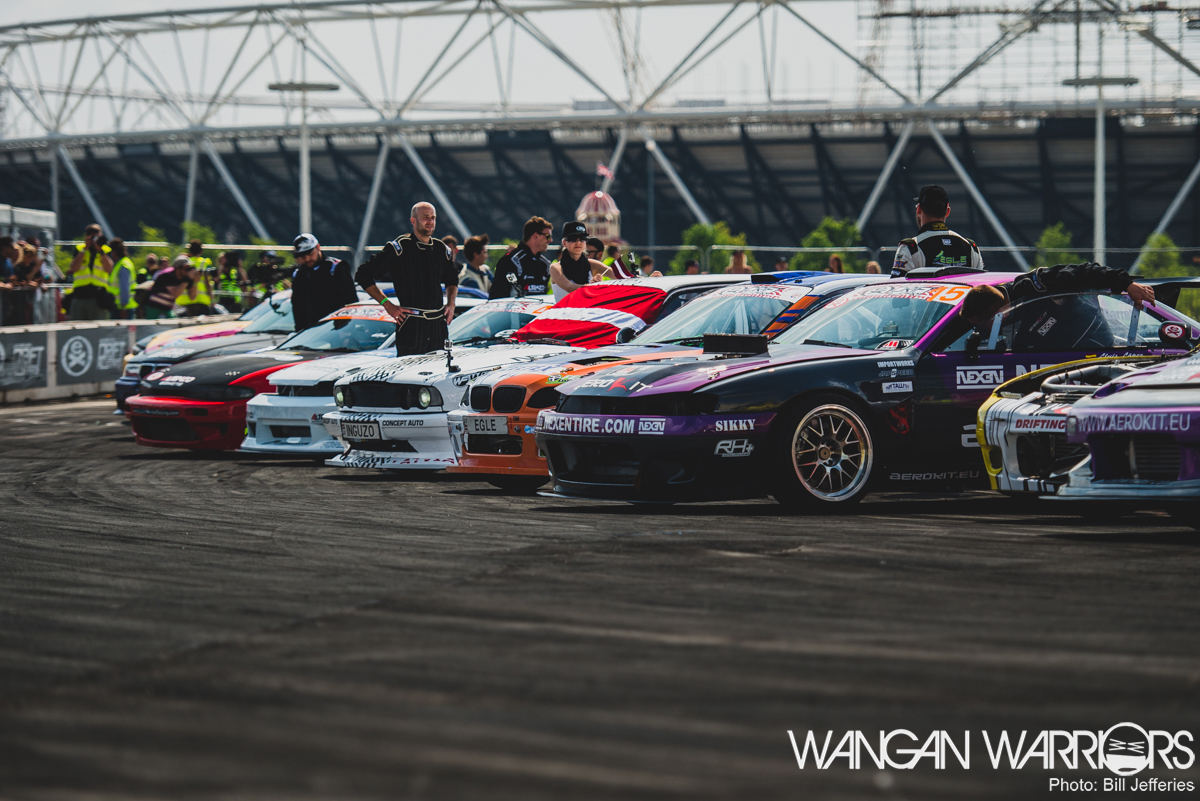 With the qualifiers finished and the Top 16 decided, it was time for the cars to come out on track for a breather before the battles begin. 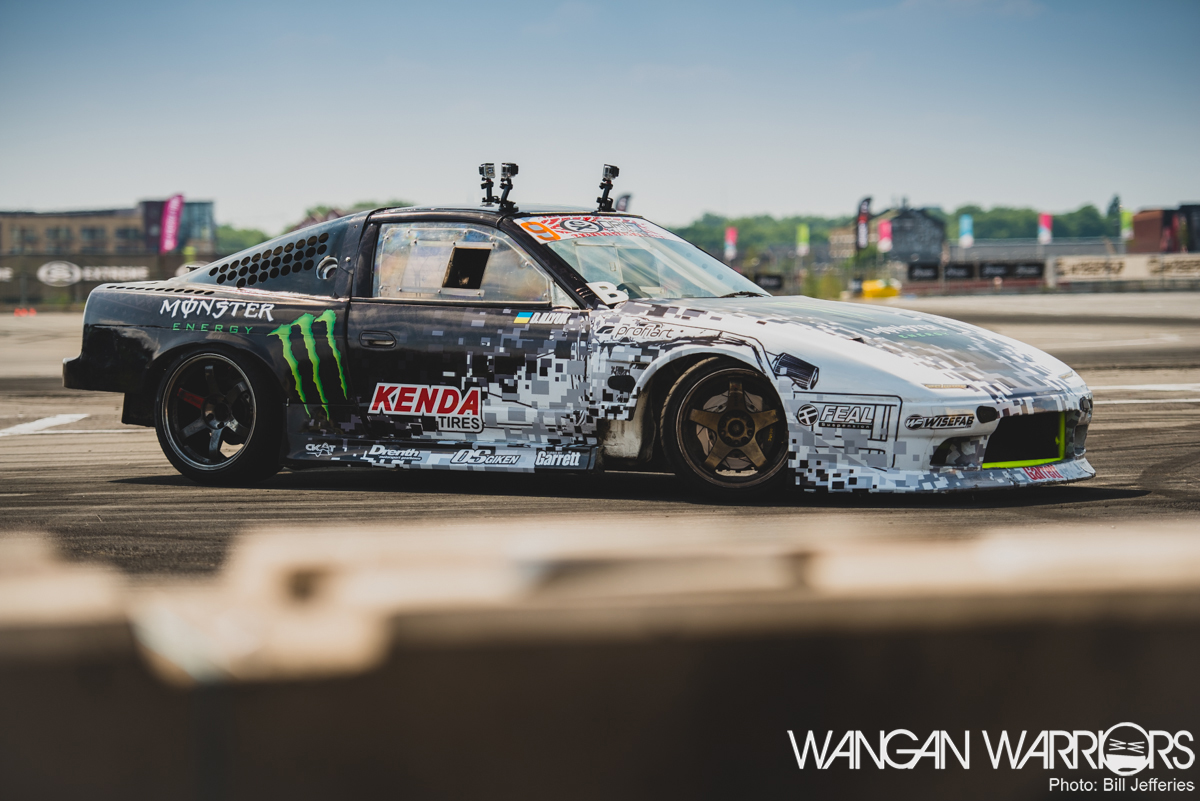 Remember when I said Illyuk’s car looked awesome? It even looks sexy when it’s not going sideways! 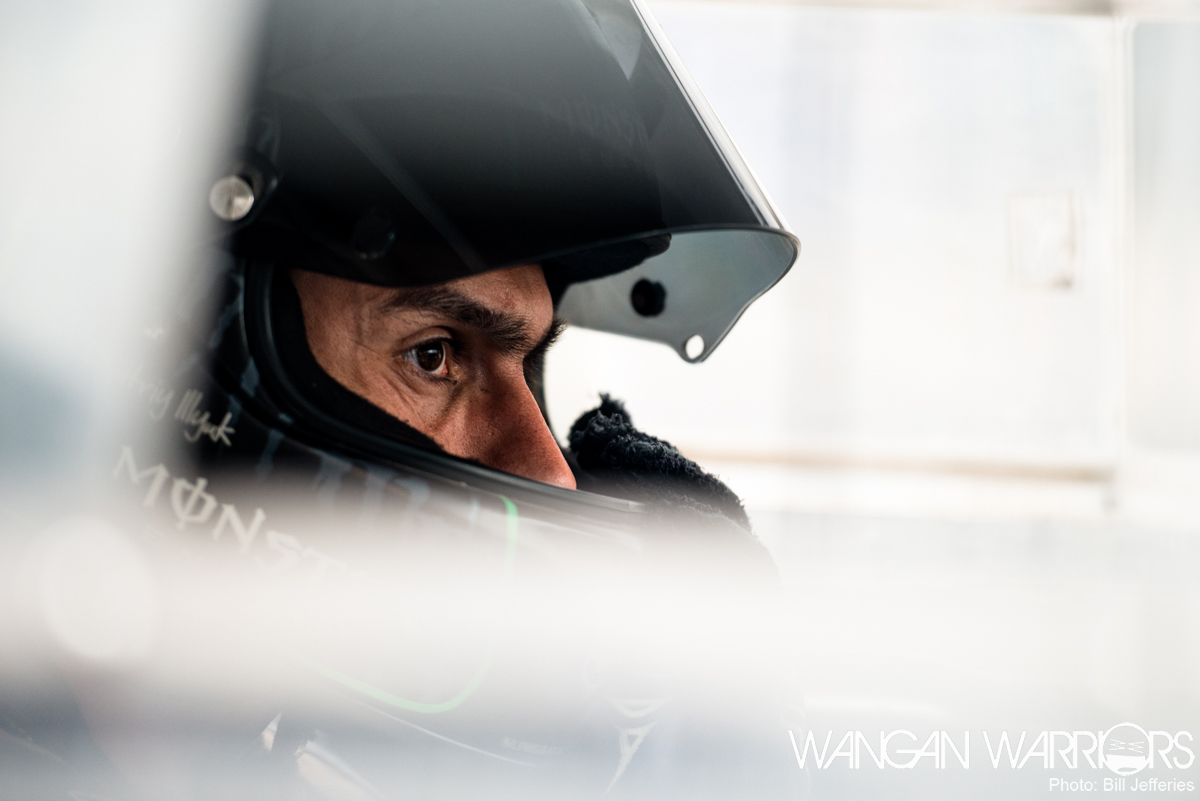 With Illyuk preparing for his run, no-one knew exactly how this event would eventually unfold. What followed was some of the most intense driving with one of the most unexpected outcomes I’ve ever seen. 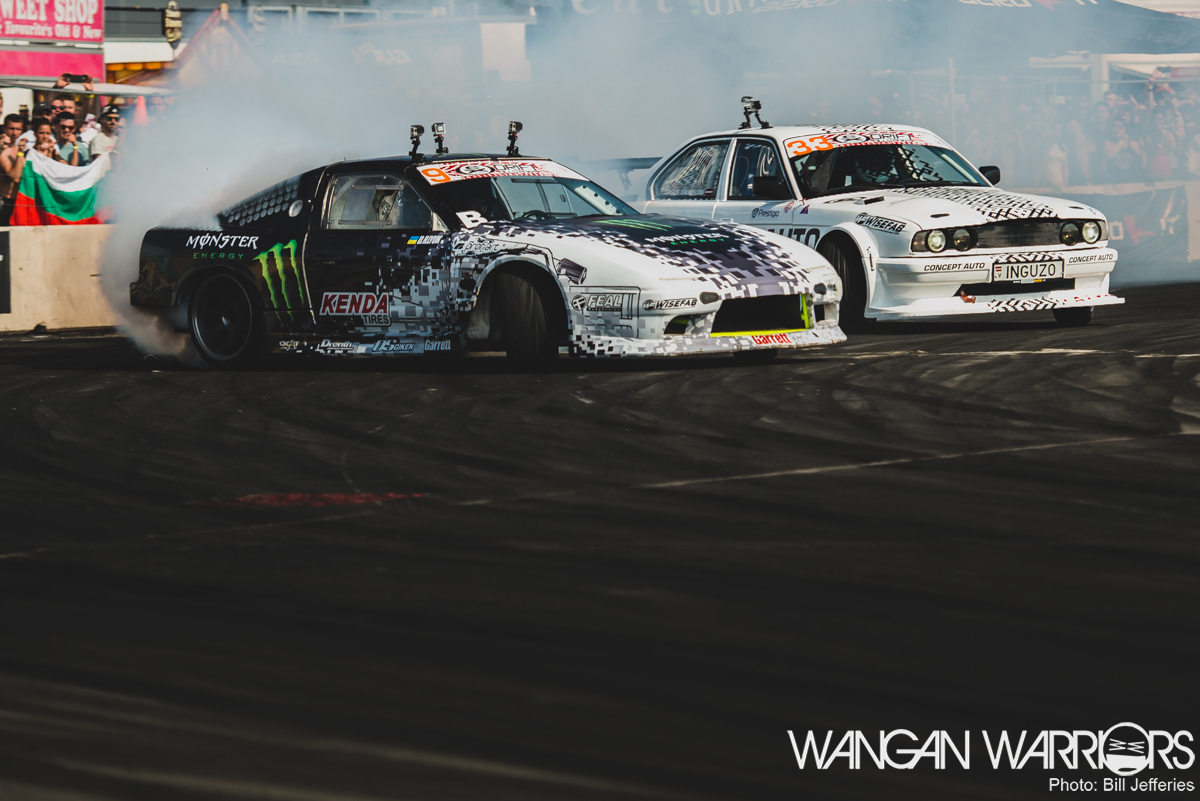 The battles were underway and the standard of driving was nothing short of crazy. I dread to think how it must have felt with such limited visibility for the trailing cars, but the drivers were determined to go all-out in the quest for a podium finish. 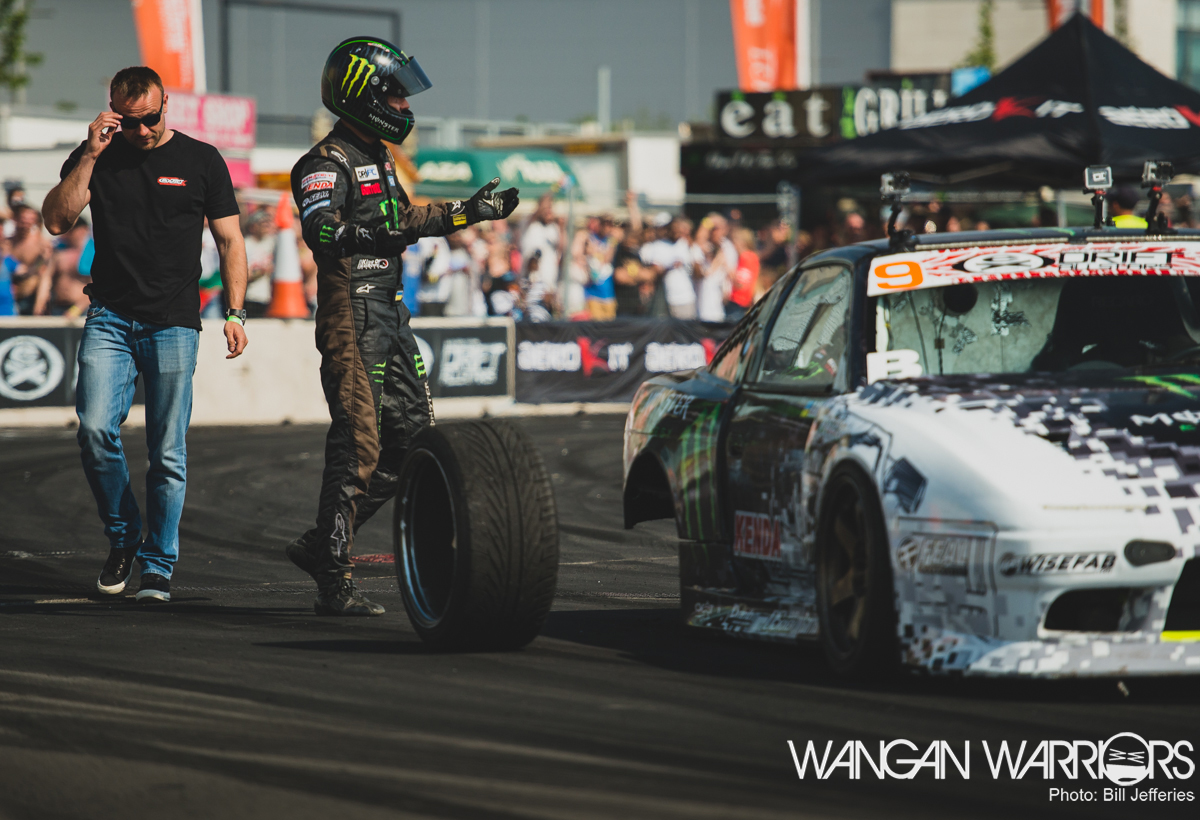 Illyuk had an unfortunate issue with his wheel spacer which meant that the wheel did more of the chasing than he managed to during this battle. This was just the start of the issues that plagued drivers throughout the battles. After this came two engine fires and a suspension collapse. The day was beginning to look a little cursed. 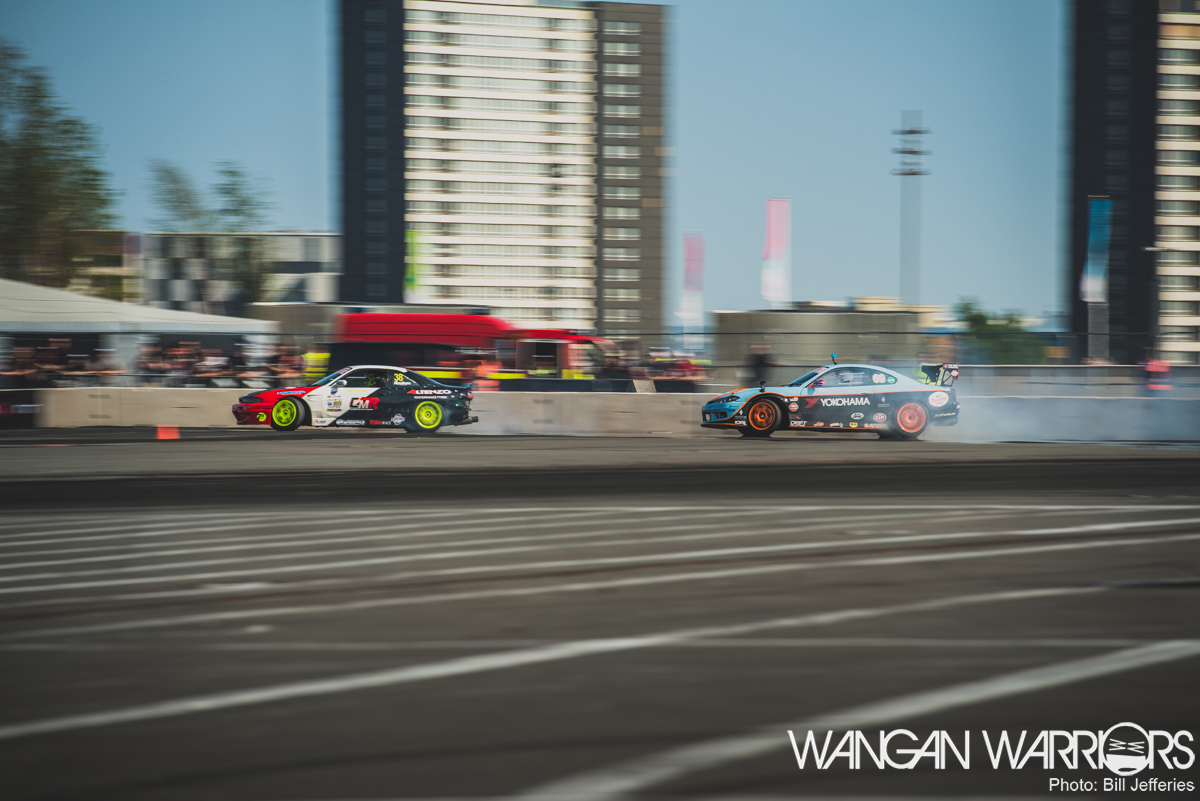 After beating Christer Halvorsen in the quarters, Dan Chapman progressed to the semi-finals. As they got underway Chapman was to face Piotr Wiecek. With Chapman determined to provide an upset by going all-out on his run, he unfortunately ended up colliding with the first wall leaving Wiecek to pave his way to the final. 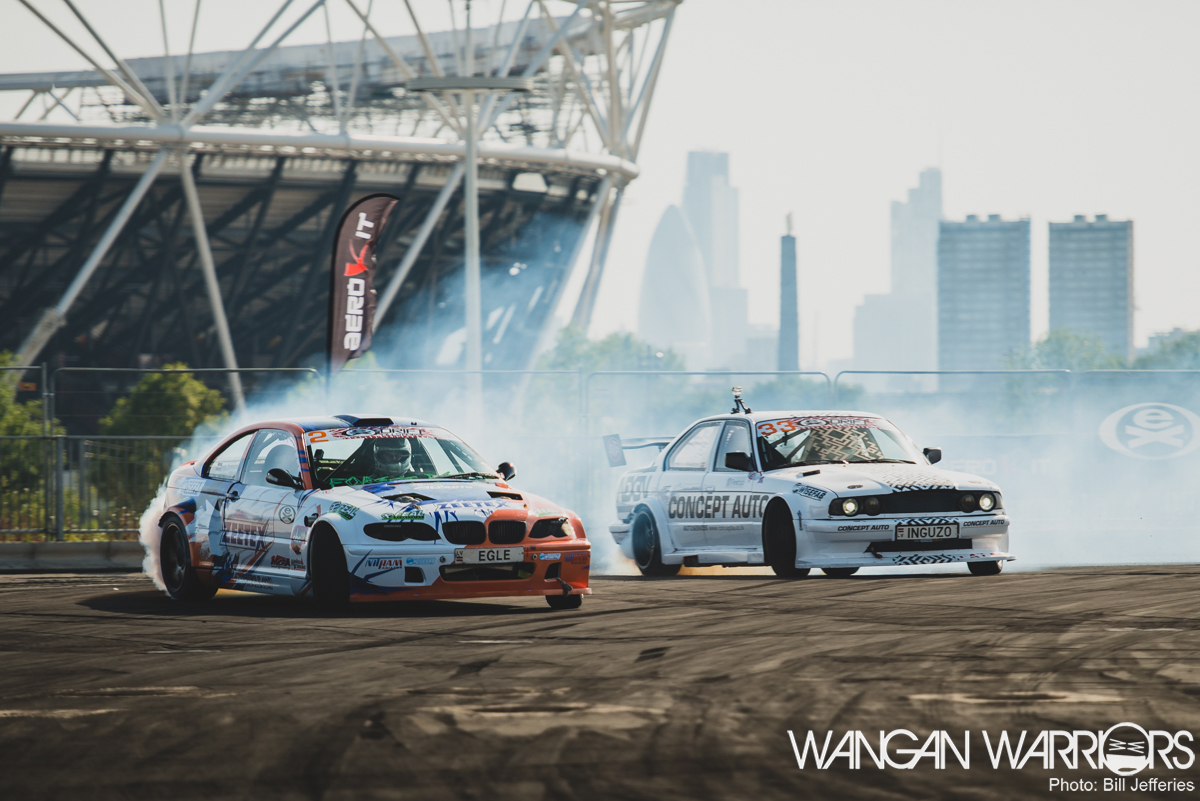 In the other semi-final, Ingus Jēkabsons unfortunately also got a little too close the first corner in his E34, leaving a painfully similar scenario to the previous semi-final. 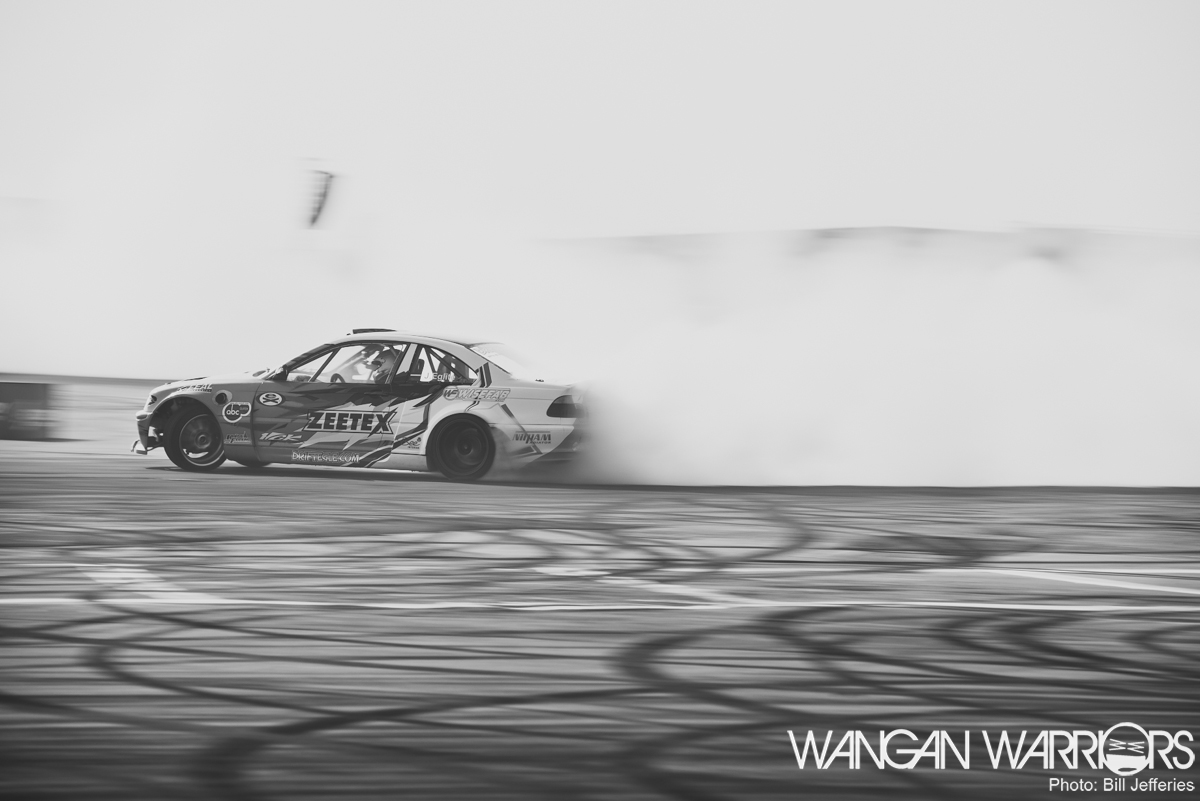 Janis Eglite was finishing his run when disaster struck, his twin turbo V8 decided to explode which unfortunately meant that the car could no longer run. Due to Jēkabsons crashing first, the win was given to Eglite but sadly due to the extensive damage done to the car he was unable to compete in the final. 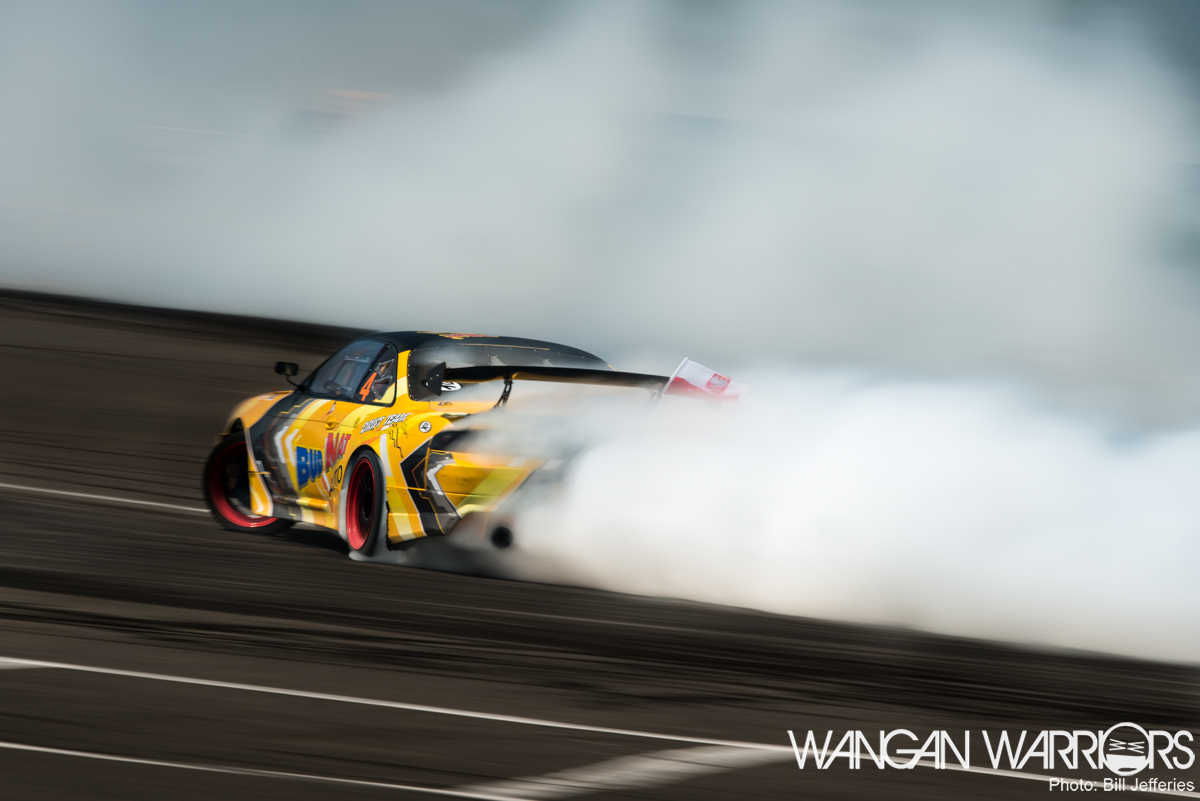 This meant that Piotr Wiecek was to take the win for Round One, it’s always a huge shame to not see a final battle take place but it was all in the spirit of the weekend. 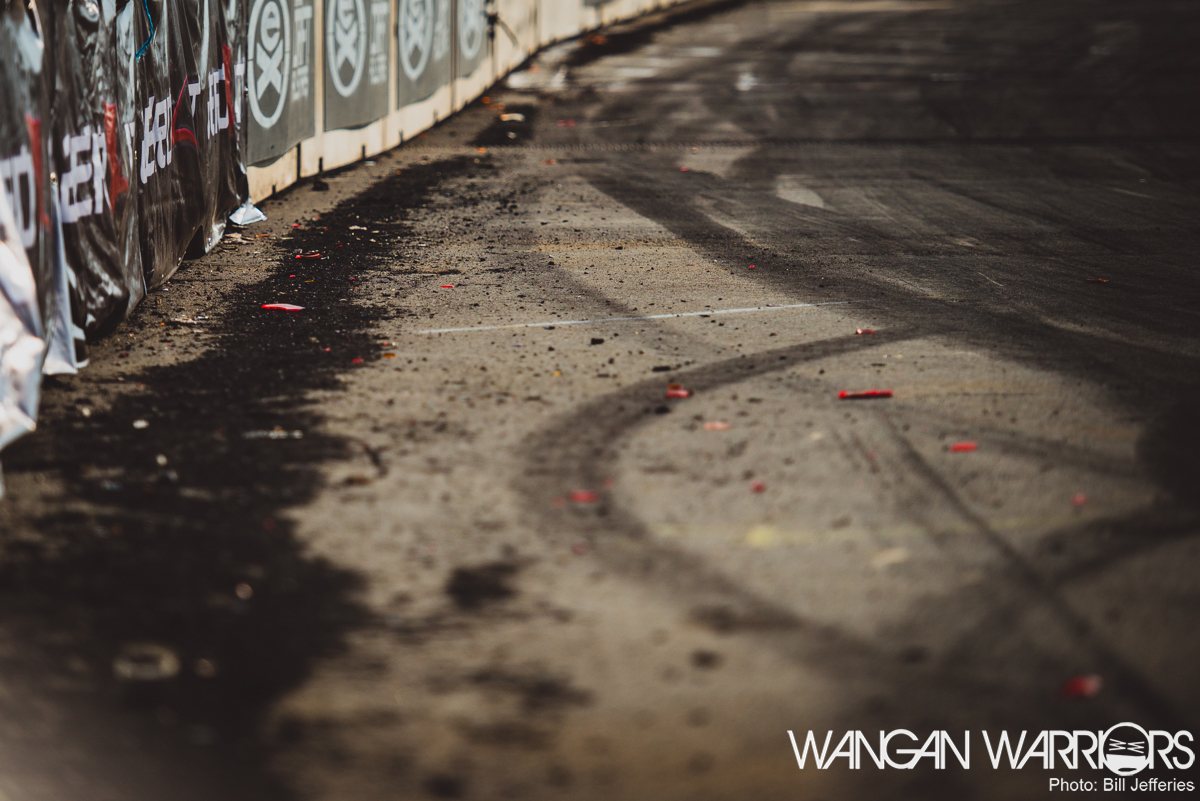 I have never witnessed such a hard fought and challenging track as this one proved to be. It left absolutely no margin for error for the drivers, but at the same time made for without a doubt one of the most exciting events I have ever had the pleasure of spectating. 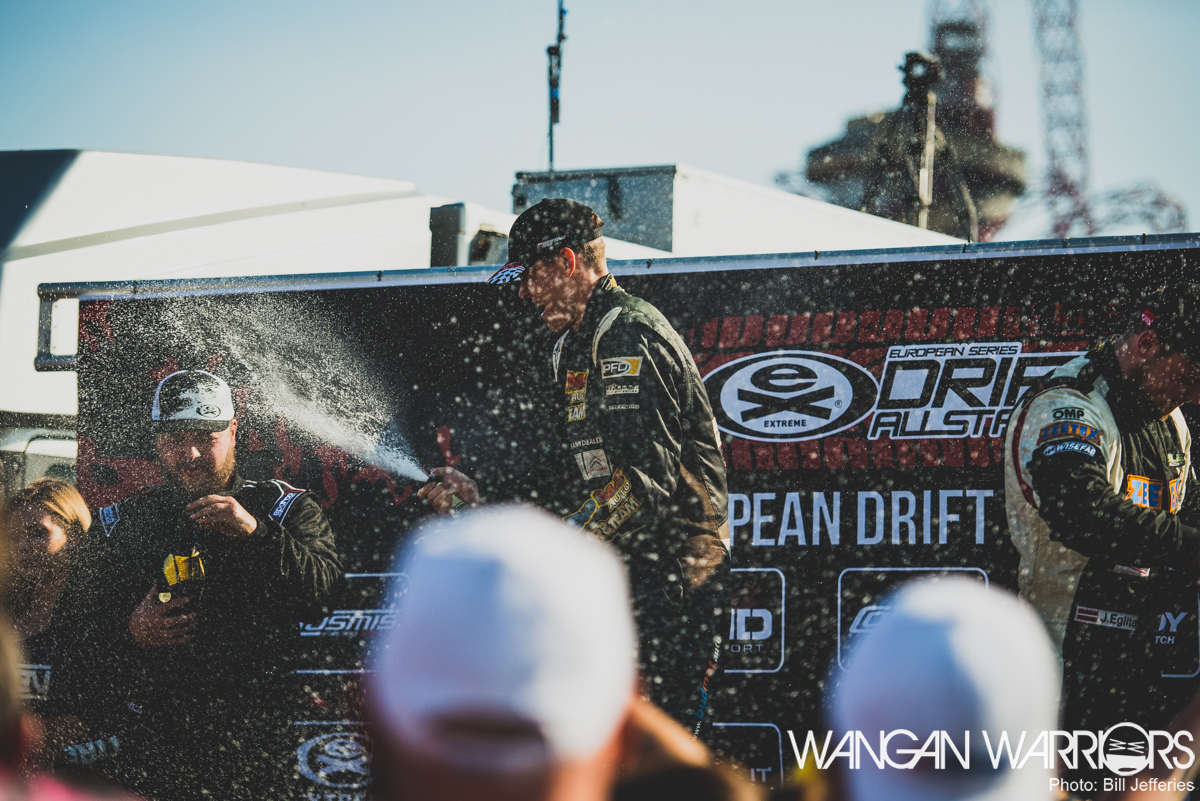 Dan Chapman took a hard earned third place on the podium. Despite having substantially less power than the European big-guns, he did a fantastic job. Proof that, whilst big power is becoming the norm throughout the drifting world, driver skill still plays a huge part in the sport. 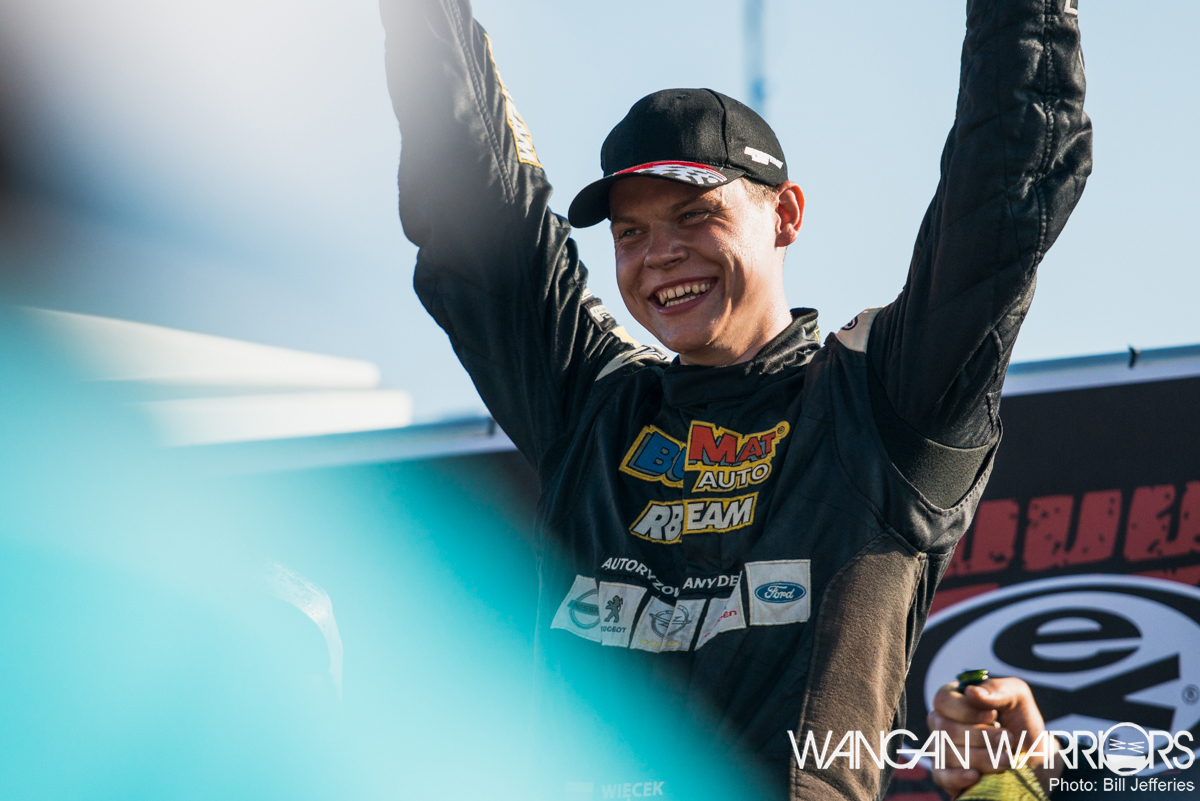 Even without a final taking place, the look of happiness and relief was clearly evident on Wiecek’s face. An extremely well-fought weekend with near flawless performance throughout made him a very worthy winner. I hope we get to see Drift Allstars return to London next year, as it was a truly amazing venue which offered something that was on a whole different level to anything we have witnessed in the UK.