Our scene is pretty humble, definitely when we’re talking about the Dutch JDM scene. I’m always a bit concerned when big organisations try out something new and pine for it to succeed at first try. A few years ago I visited my first GT-Events organised event and had a better feeling about that day compared to various other events I attended that season. HondaFest was the GT-Events’ first Japanese car oriënted show they set up in 2013. When I started following the event on Facebook I knew Wangan Warriors needed to go and have a look this year. 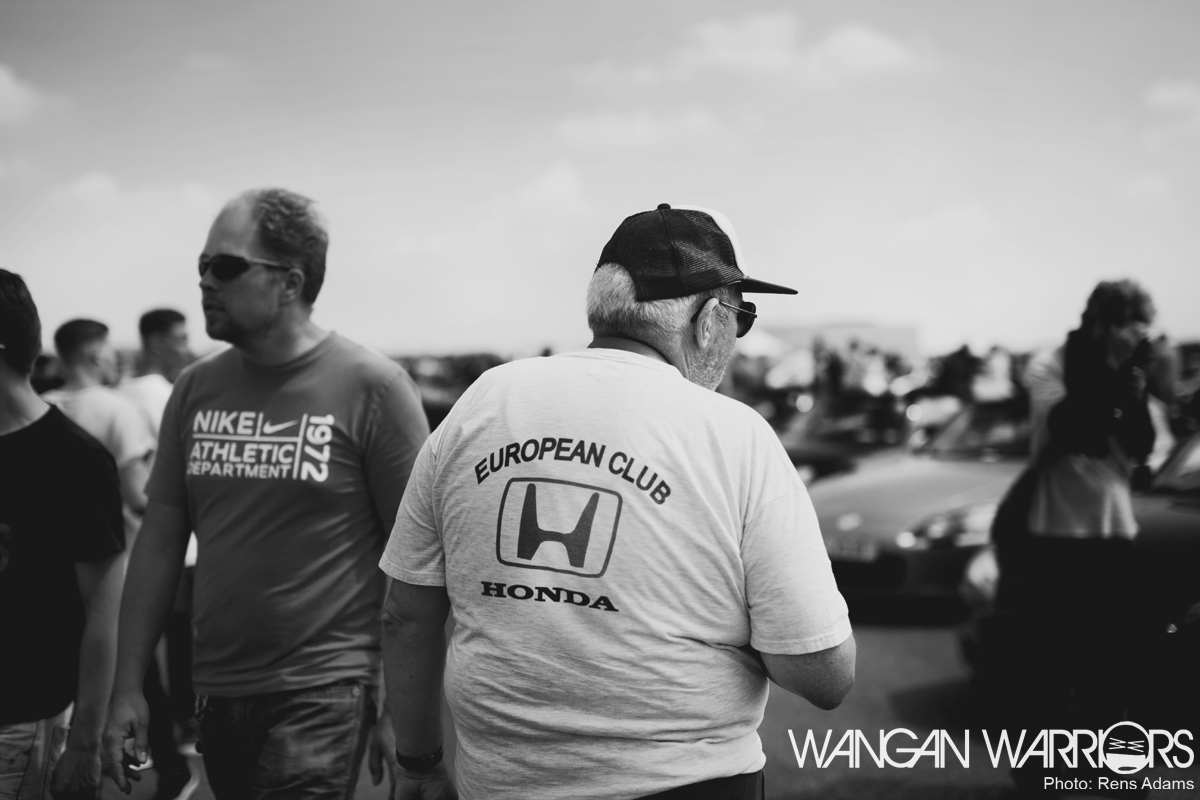 Honda is the most worn brand when it comes to all the different types of tuning or styling and it’s easy to say you know what to expect when visiting a Honda event. However, I was surprised in many ways last Sunday and I’m happy to share a selection of my personal highlights of the day. The Trafficport in Venlo was packed with Hondas from all over Europe. 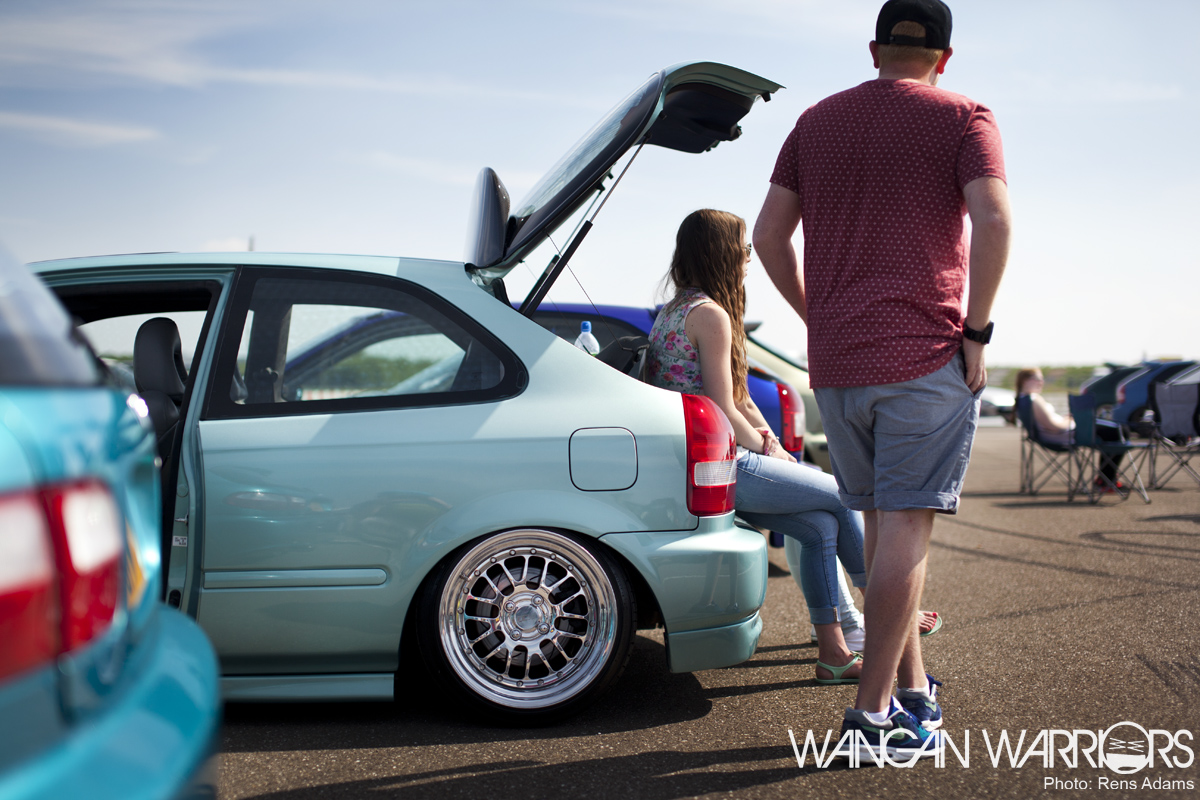 Let me start with my personal favourite of the event. This is Aaron Gemell’s UK spec EK4 which is awesome from top to bottom. The original engine was replaced with a B18c6 which we know from the Integras and the EK has a Rayvern Hydraulics system installed. My first guess was airride but I’ve been told by Aaron this system is pretty common in the UK these days. 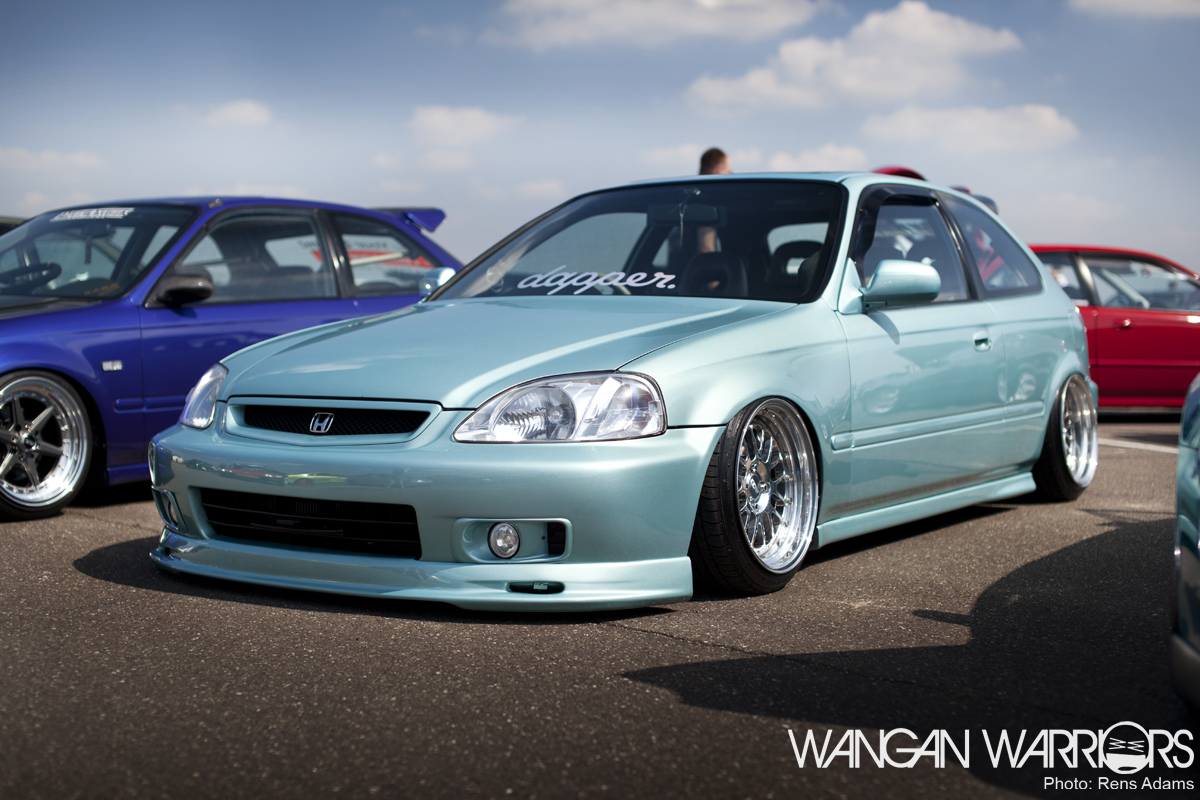 The bodywork was a piece of art itself. I always admire people who are able to keep their car as clean as that, I don’t have the patience nor the discipline for it. Not a single scratch or dent to be found on this one, no, absolutely showroom ready. And such tidiness goes hand in hand with a decent pair of shoes and here we’re talking about the CCW LM16’s. 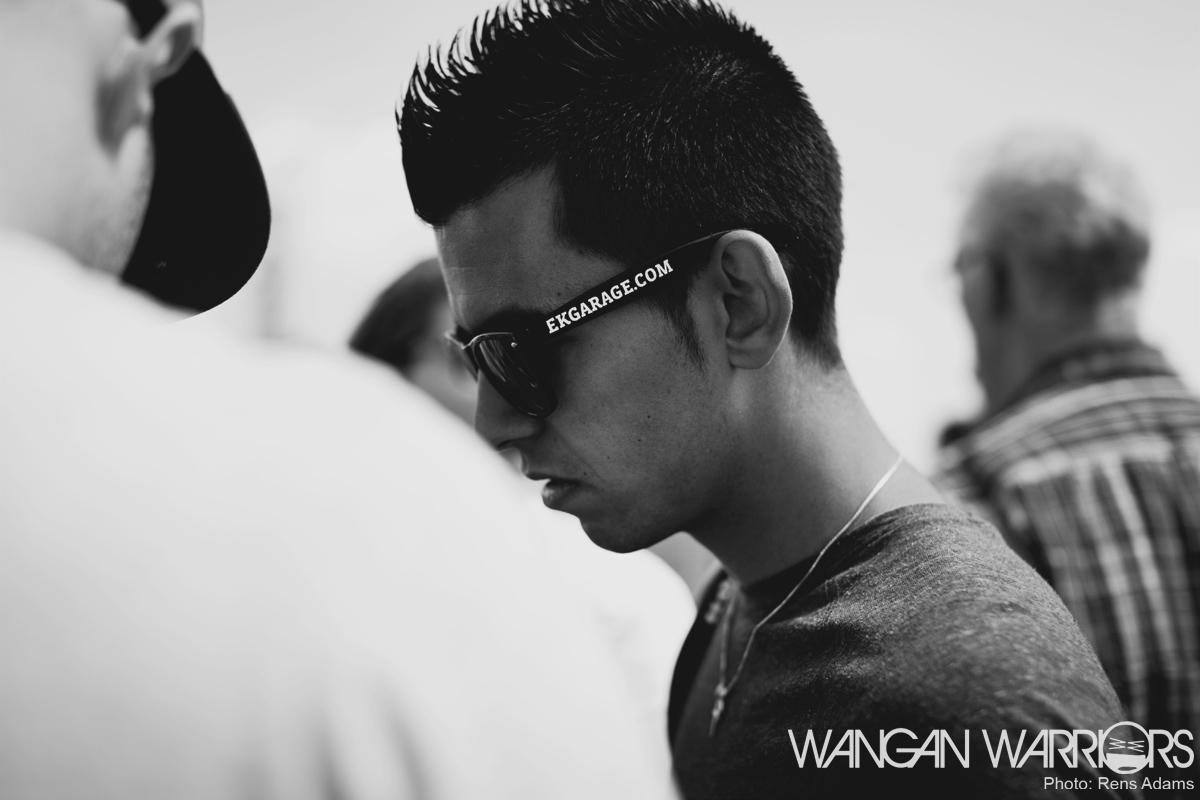 Wesley Samson from EKGarage was able to convince people from 5 different countries to join him on the EKGarage paddock. It’s always great to meet such people in our scene because these guys are dedicated to raise the bar just a level higher to show everybody else how it’s done. 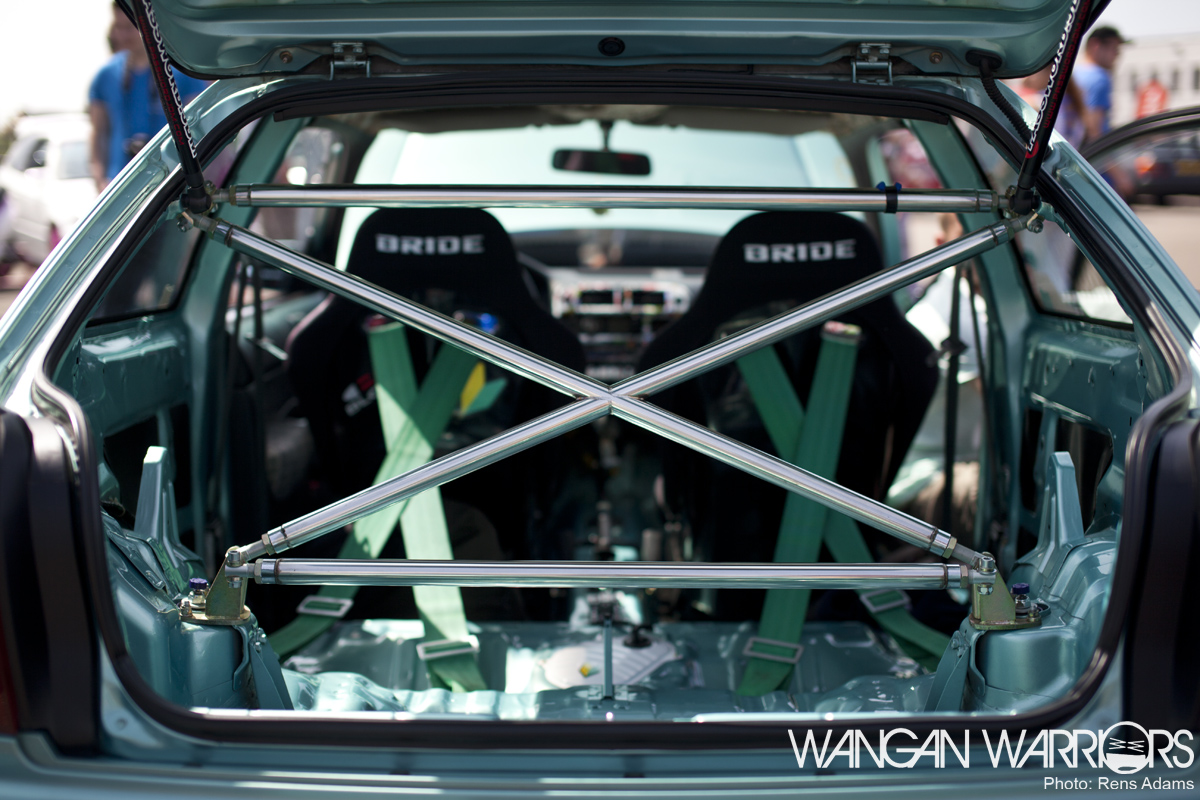 The finest looking Civics of the event were to be found at their area for sure. There were quite a few who drove over from the UK and it was great to meet a few of them as well. You never know who you come across but it was nice to get to know a few new people at Hondafest. 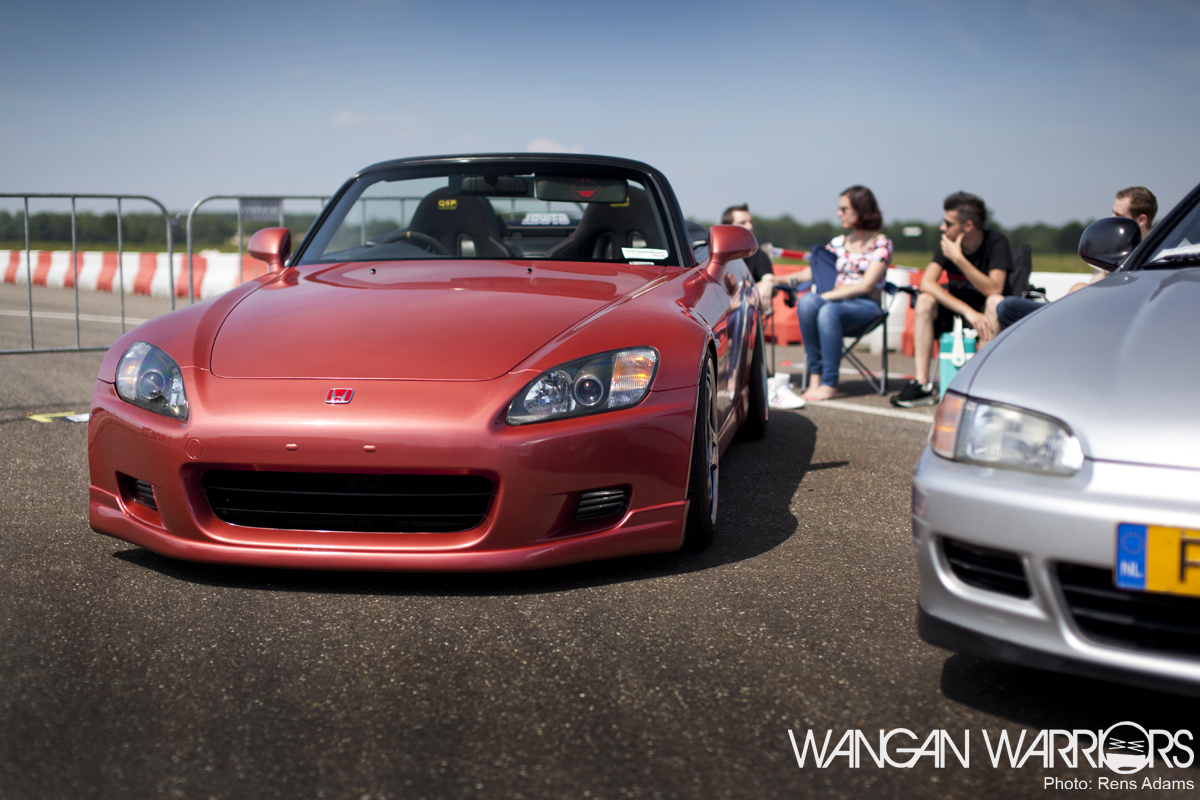 Moving on from the EKGarage stand to the rest of the show paddock. I was happily surprised to see this S2000 who recently signed up on the Wangan Warriors forum. This project has been restored completely. The owner bought the car in a pretty bad condition but right now we’re looking at one of our country’s cleanest S2000’s. 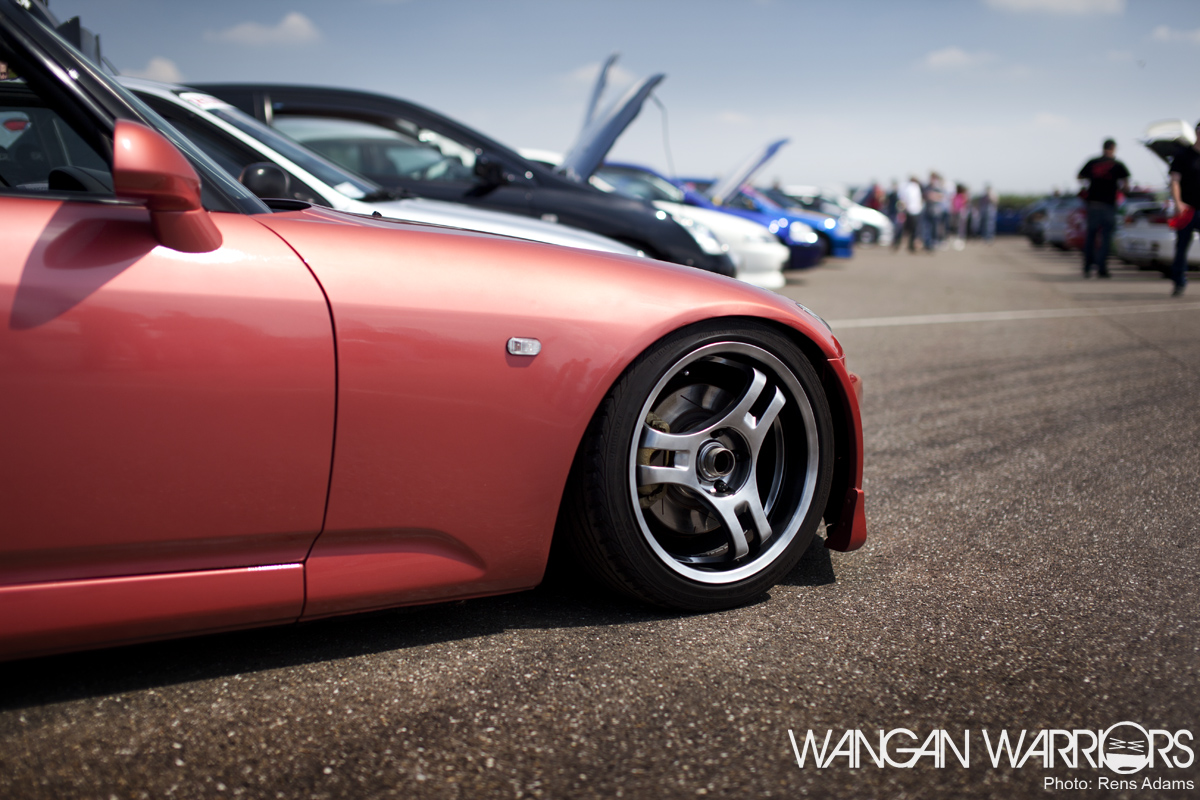 Maximum amount of kudos for the owners Kenneth and his girlfriend for the choice of these Advans because they look absolutely stunning. Also knowing that this Honda is a completely self built and painted car, raises the amount of respect I have for the owners and their project. A job well done! 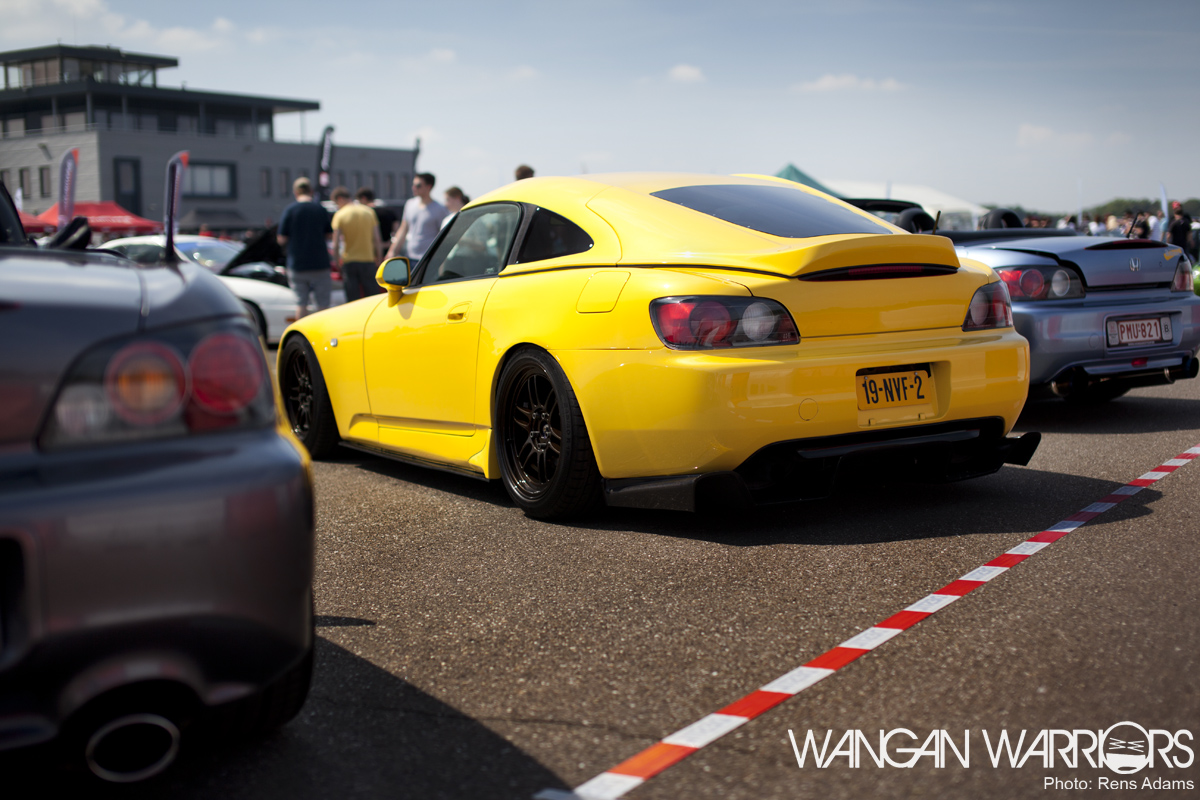 Keep your eyes focused on this page for the coming days because Allard is still about to drop another one of his great features. He recently did a photoshoot of the S2000 of Tim van den Heuvel and if you checked our page on a regular basis you might already saw some nice previews passing by! 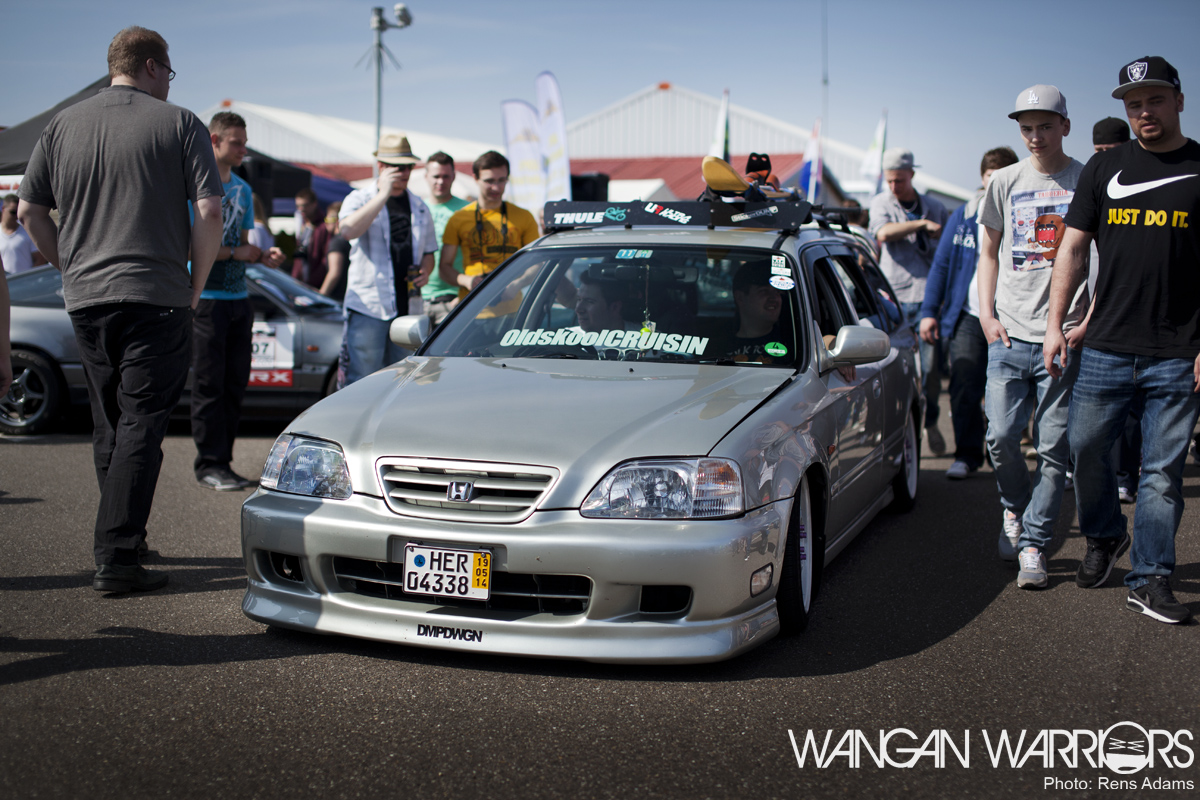 Another one of our forum members who showed up was Chris and this German guy owns something we rarely see at our carmeets. Take a good look at this Orthia because you won’t see him driving in the streets everyday. Chris told us on our forum that this is really a car for shows and events. 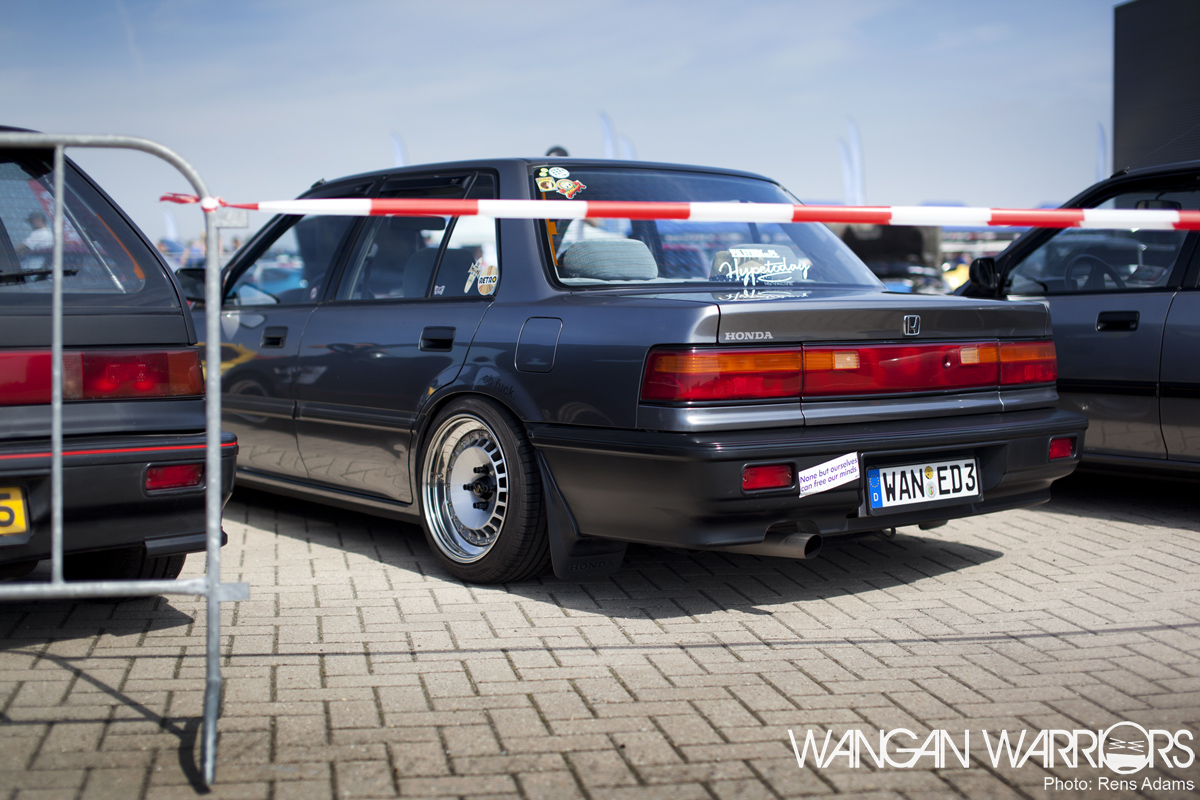 As much as I love to become acquainted with many new people, it’s always nice to see friends you don’t get to hang out with that often. Our friend Patrick Trießl of Fahrkult Magazine knows what style means and was representing the Retro Corner at HondaFest with his EF saloon. 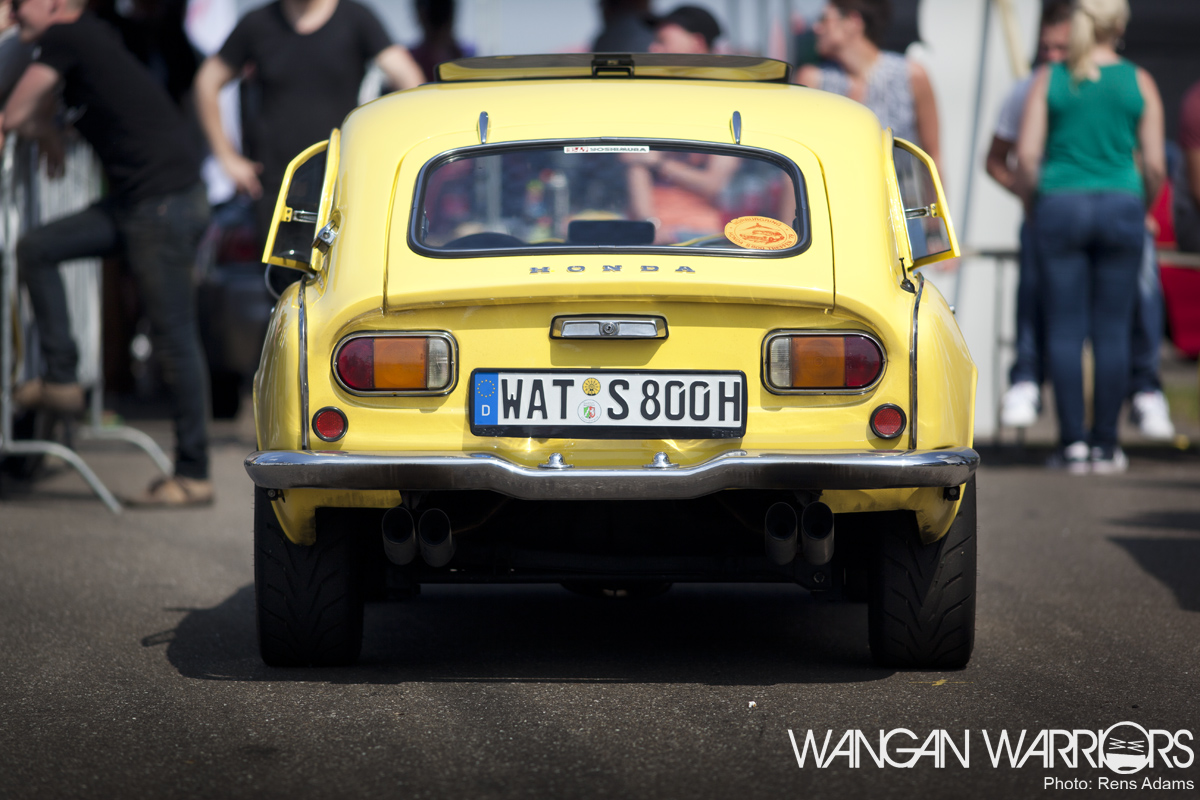 That wasn’t the only cool classic at the event. I didn’t expect to see a S800 any time soon but we bumped into this little beauty at the point where he was being judged in the Show ‘n Shine contest. Make sure you check the HondaFest website for all the results of the contests. 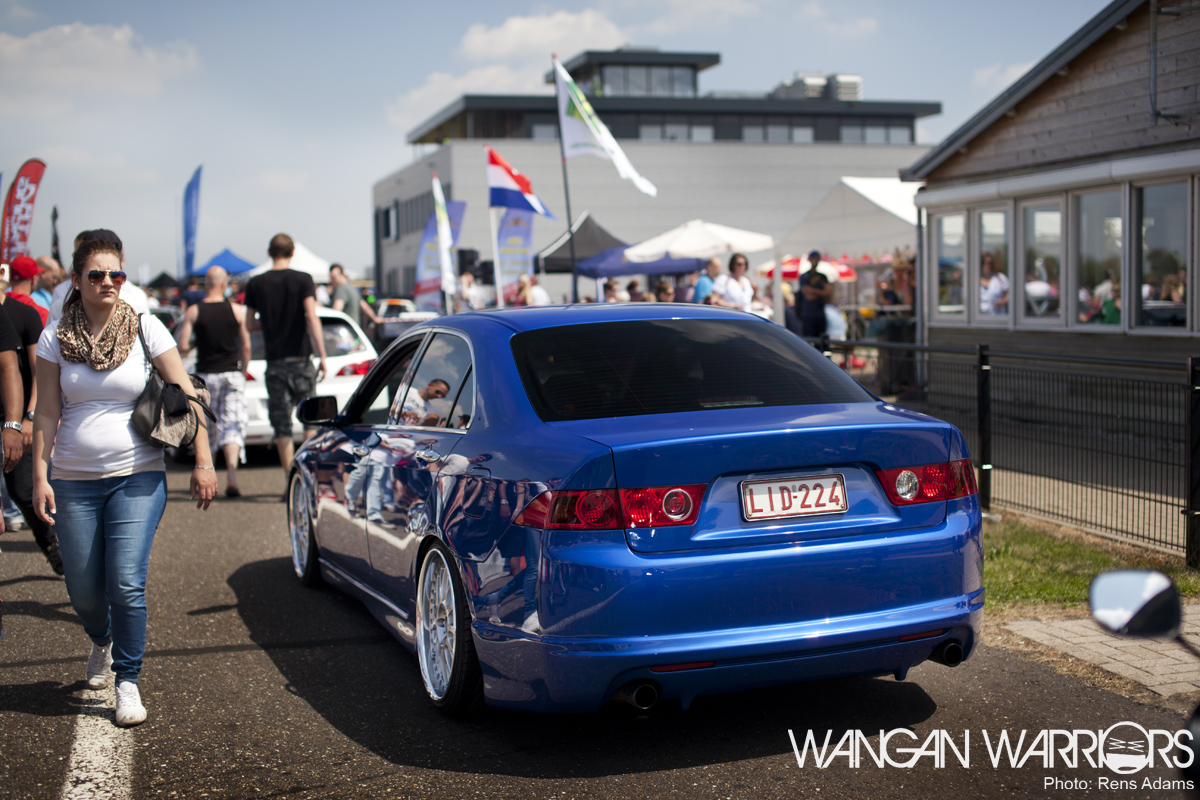 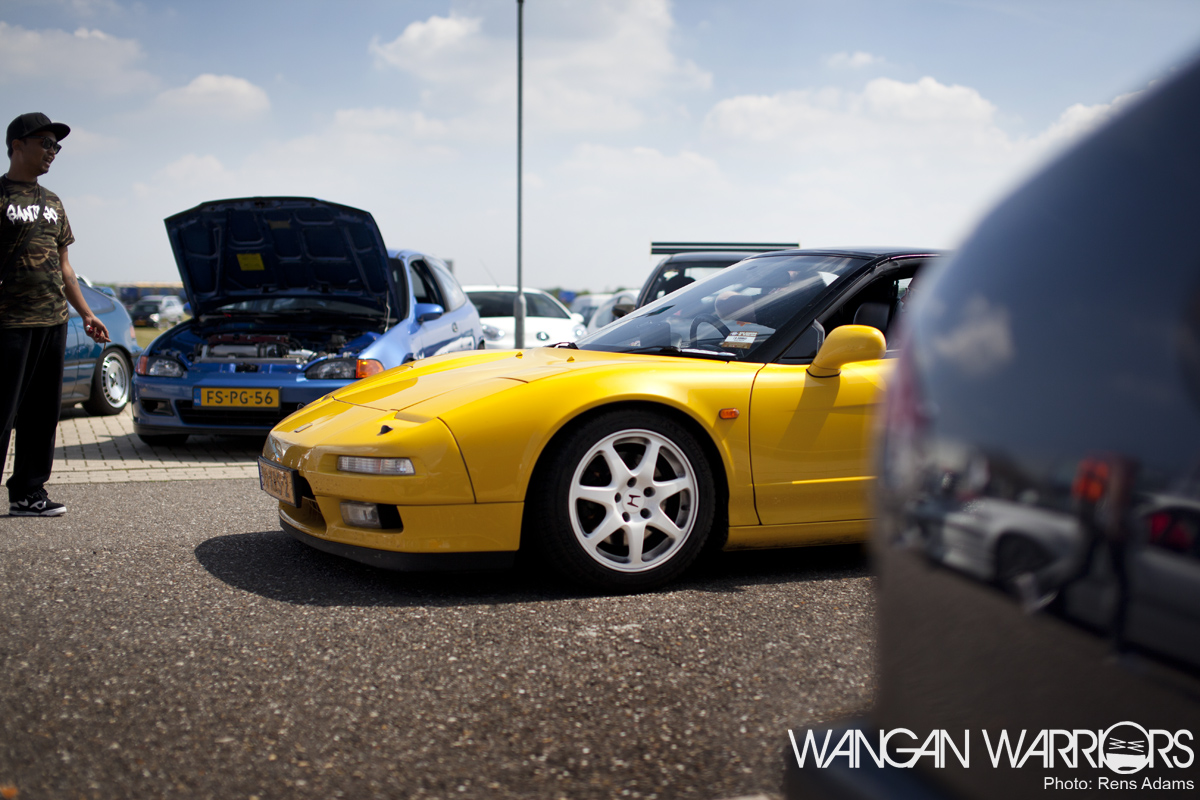 The Honda NSX Club Europe was due to make an appearance and around noon the event was a bit stirred with their arrival. Our crew member Allard spent the whole weekend with the club covering the tour they made in the past weekend and he will tell you all about those adventures shortly. 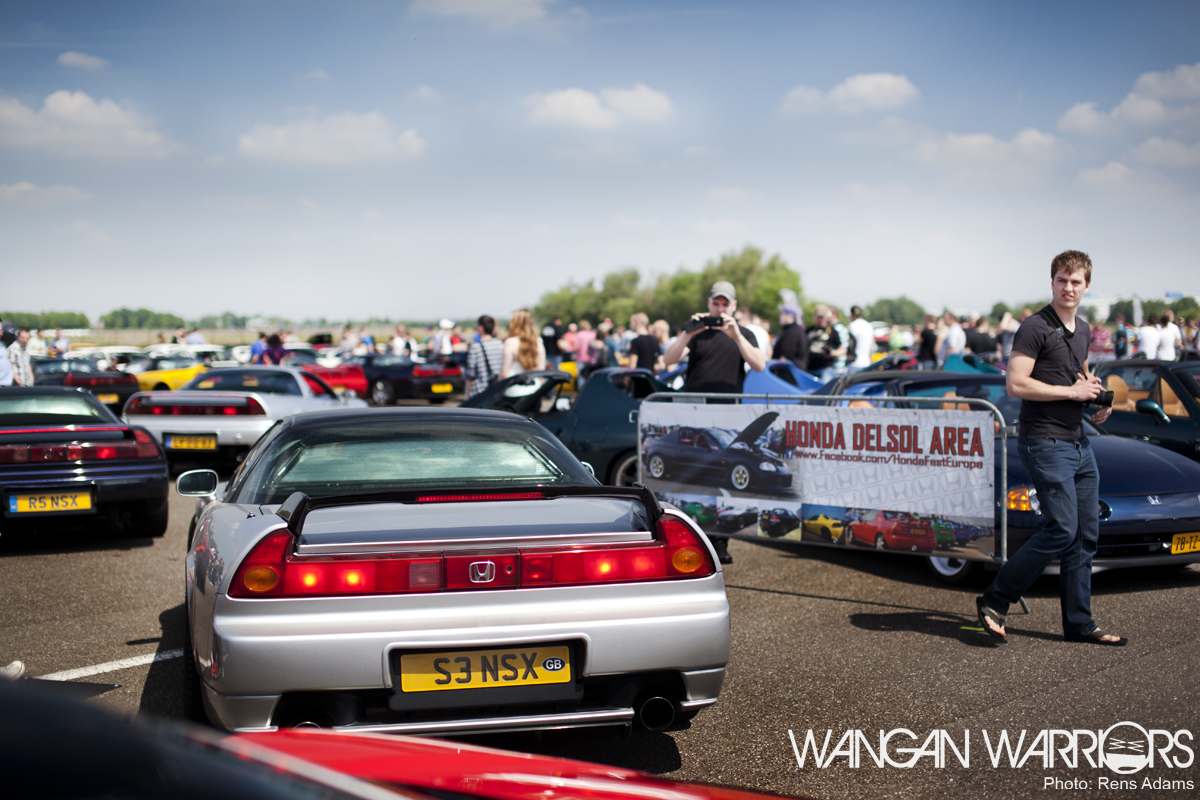 I don’t think that I’ve seen so many NSX’s at the same time and location but it sure as hell was a gift from above. This is one of those models which gives you goosebumps when it passes you. We picked out one NSX and will showcase it in one of the coming parts of the event coverage. 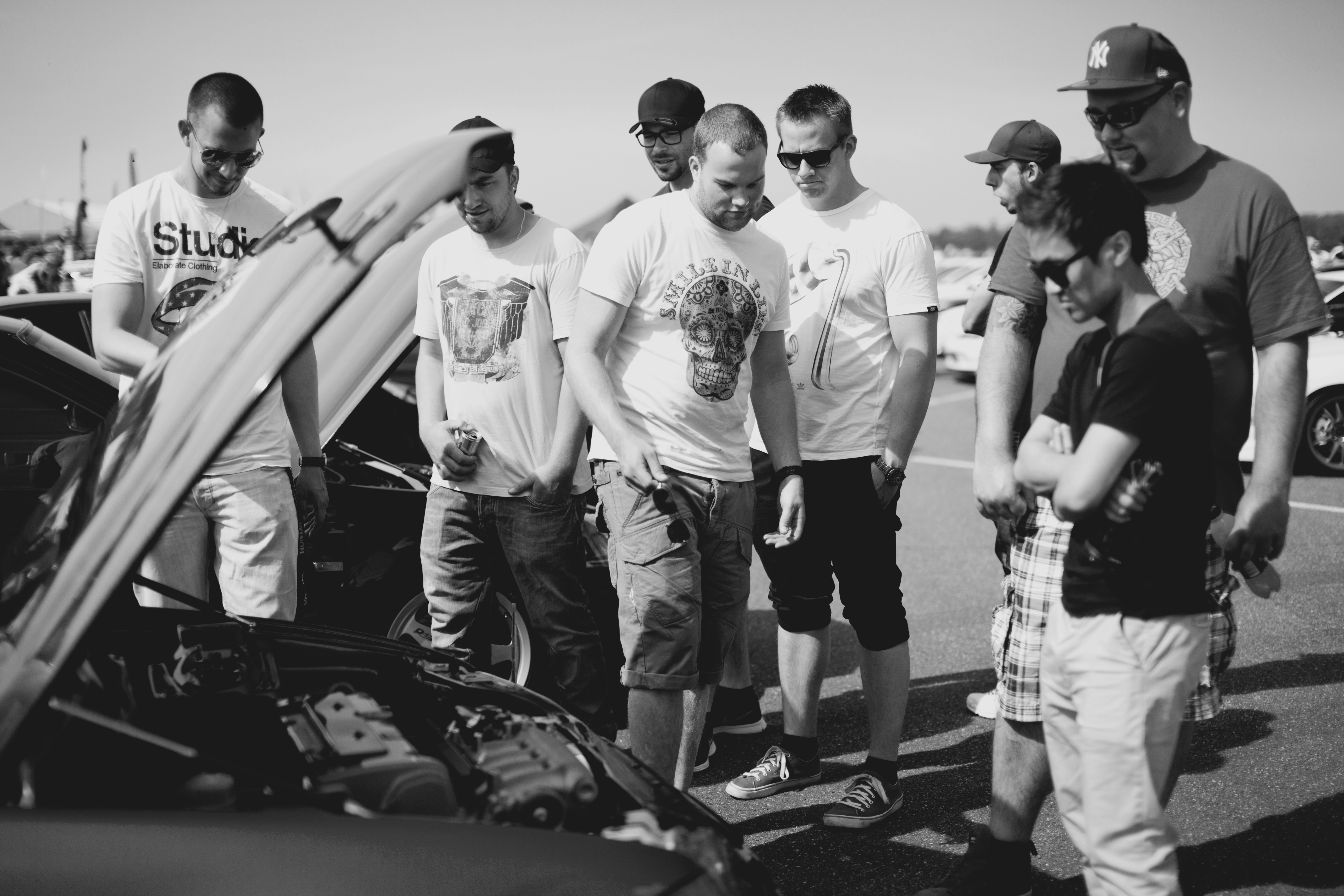 We were so lucky with the sun shining the entire day because like it or not, good weather is a necessity for your event. It’s really important to have an enjoyable vibe and a good mood amongst the visitors and a bit of sunshine really helps with that. 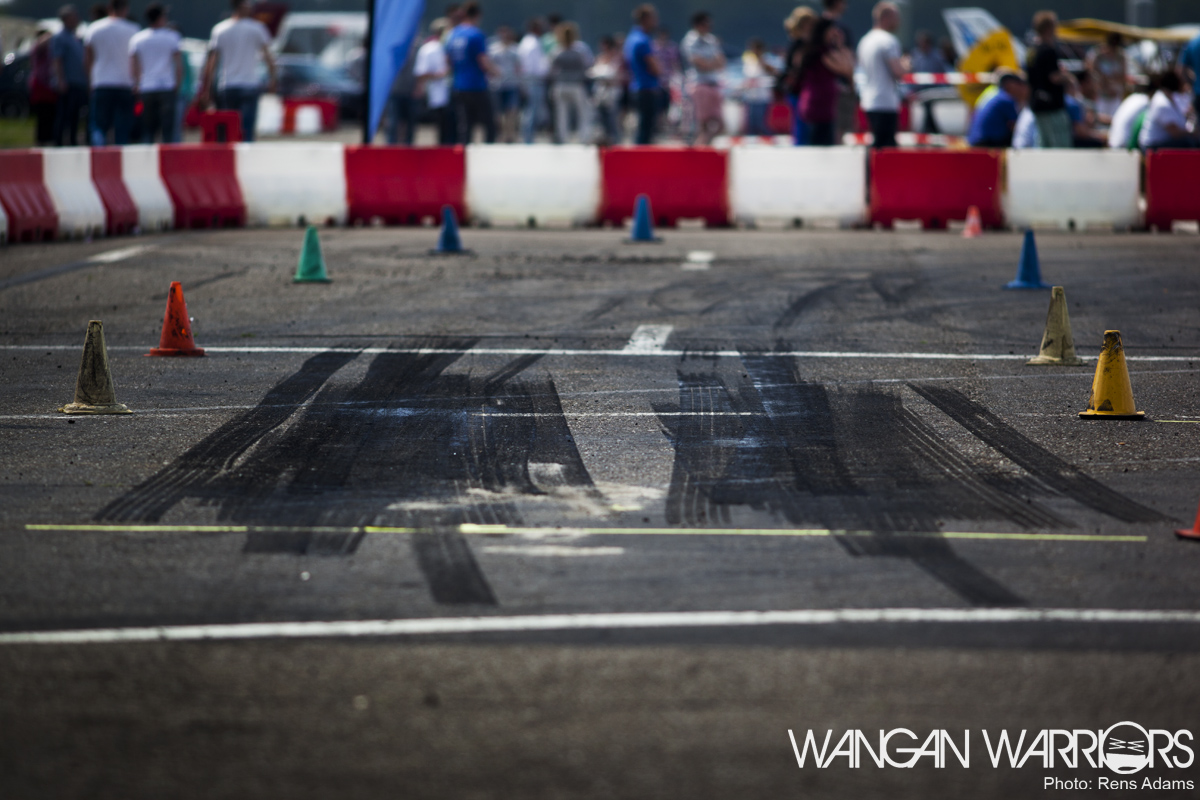 The Ultra Racing Handling course was put to good use as you can see. This was the perfect opportunity for visitors to experience some track action and to show if you’re the one who can complete a short track in as little as time possible. 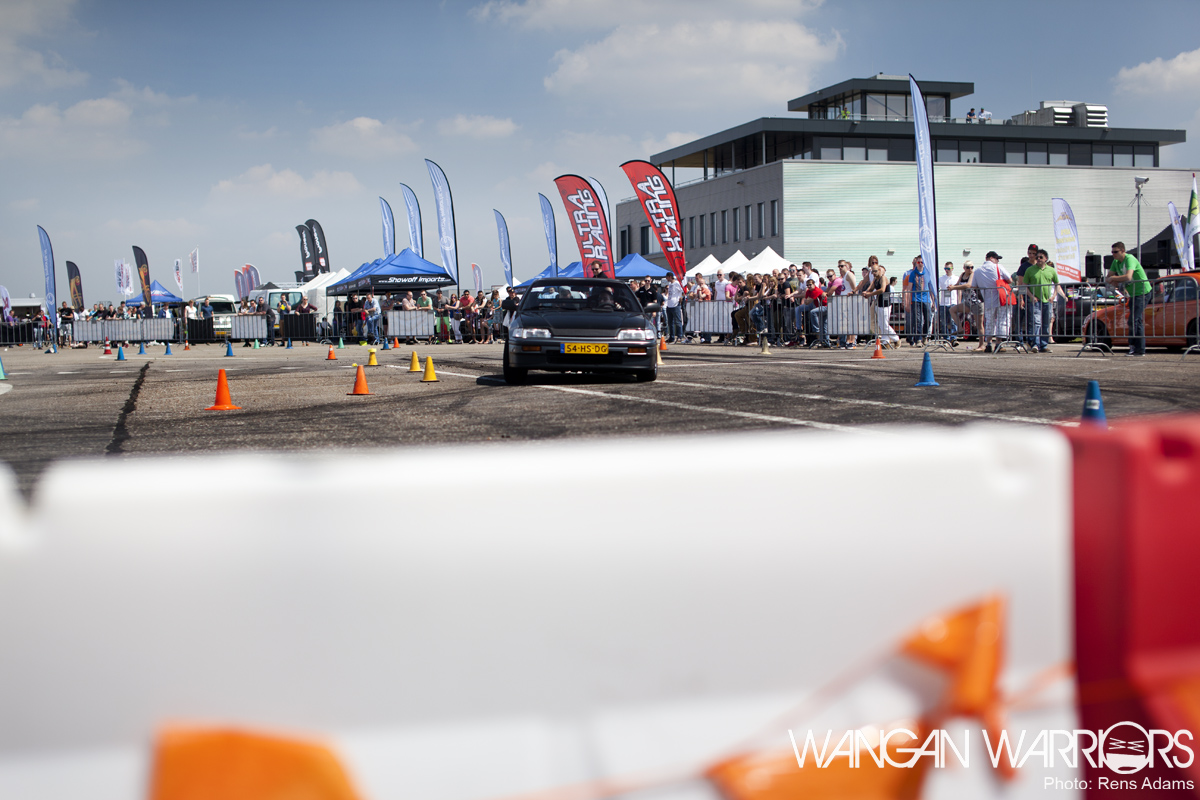 I bow for those who were able to do so because the course looked really small and daring, but hey, that’s just me, a photographer on the sideline with barely any track experience myself. 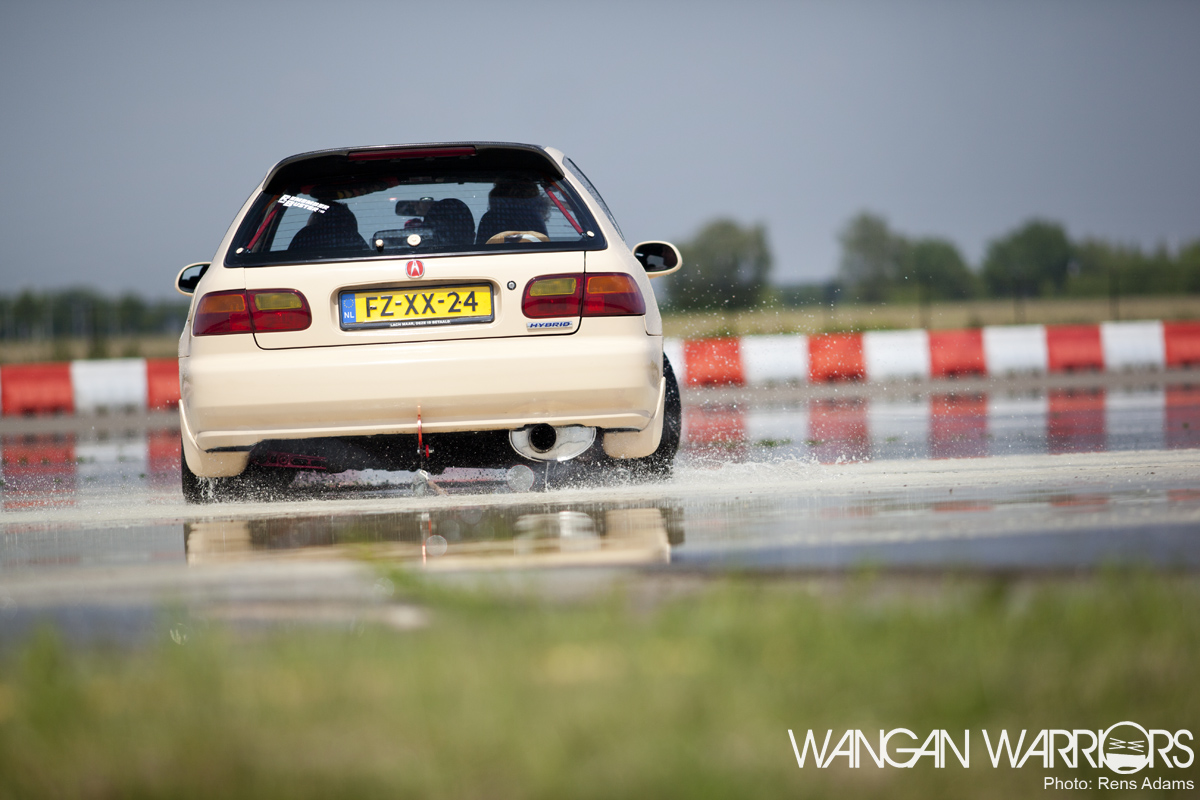 At the end of the event area, there was a course for people who wanted a taste of the Wet Track Experience. This wasn’t only for fun but also an opportunity for people to learn how a car behaves in extreme wet road conditions and how to control your car. It looked like most drivers were having fun during the sessions and soon got the hang of controlling their Hondas in the wet. 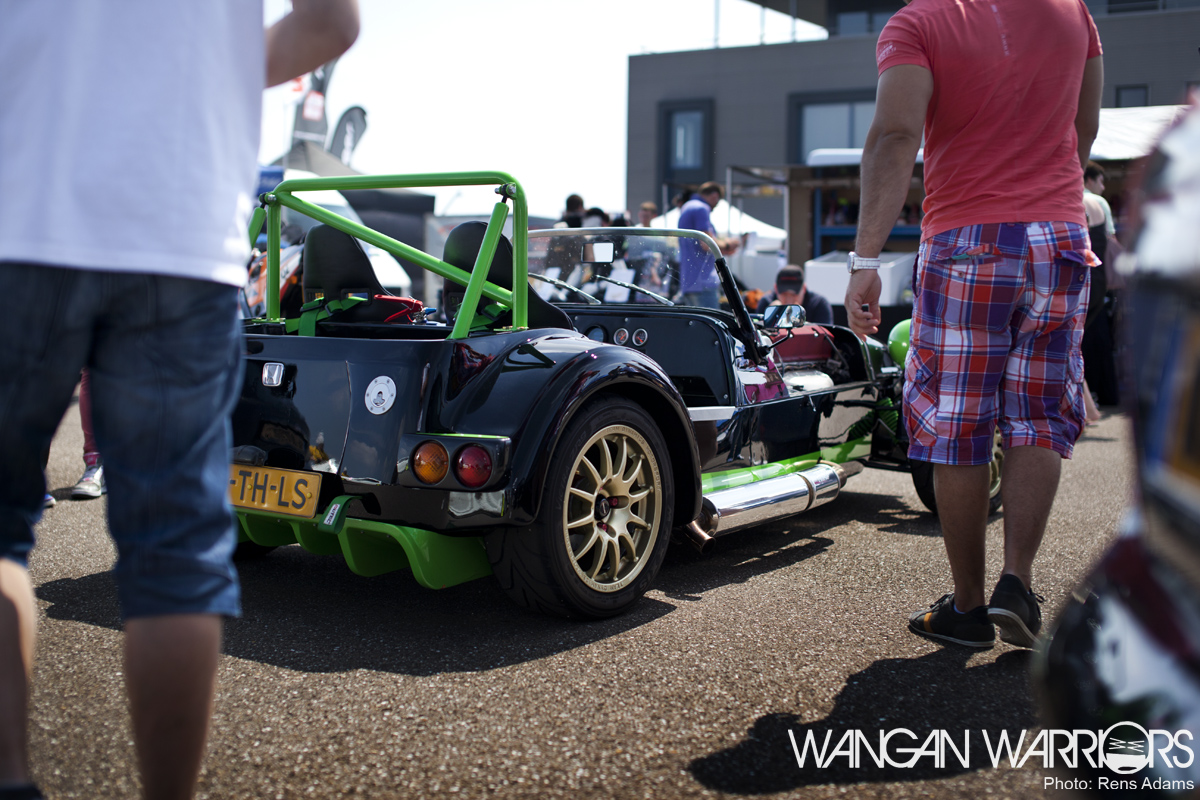 I see you frown a bit now but don’t worry this is indeed a Westfield Sports kit car but it has every right to drive up on the paddocks of Hondafest because it has a Honda hearttransplant. It now runs the 240bhp strong F20C from a S2000. 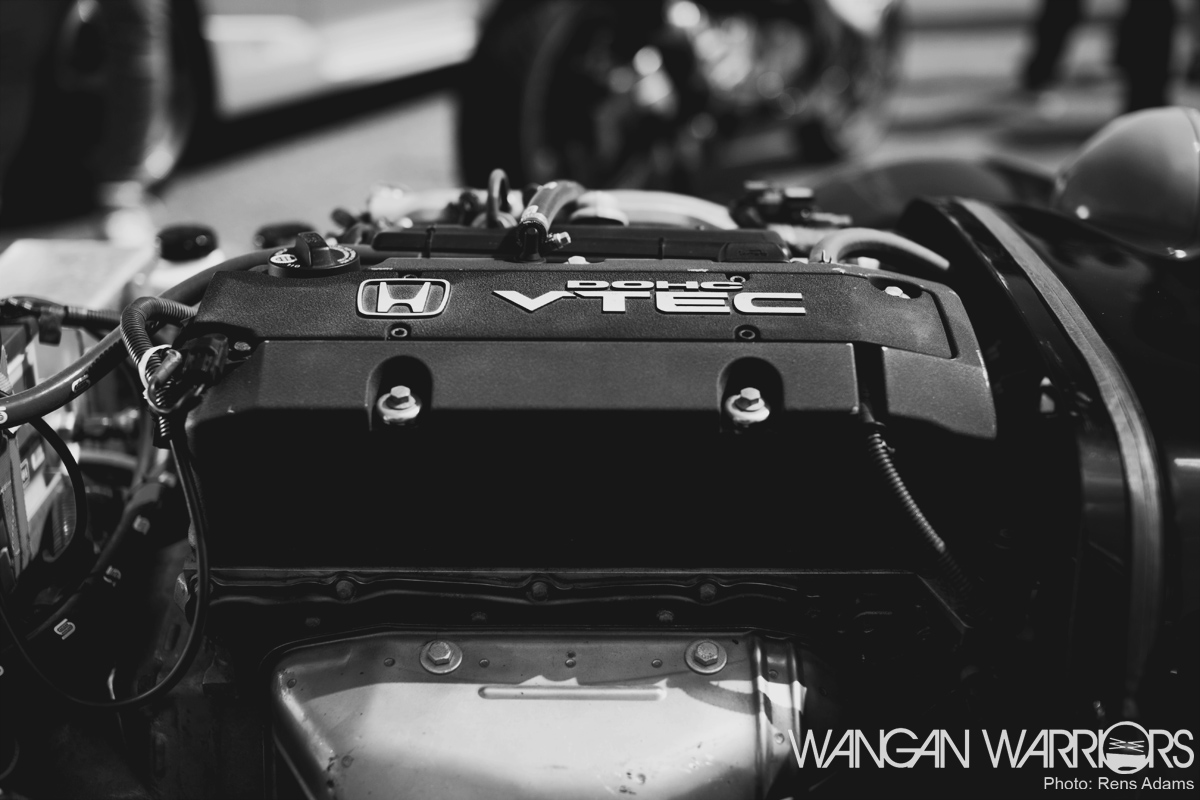 Knowing these cars normally don’t weigh over 700kg, it’s a given that this little monster is your worst nightmare at a red light. That moment when you just have to look over to your girlfriend and apologize in advance for being humiliated by a kitcar. 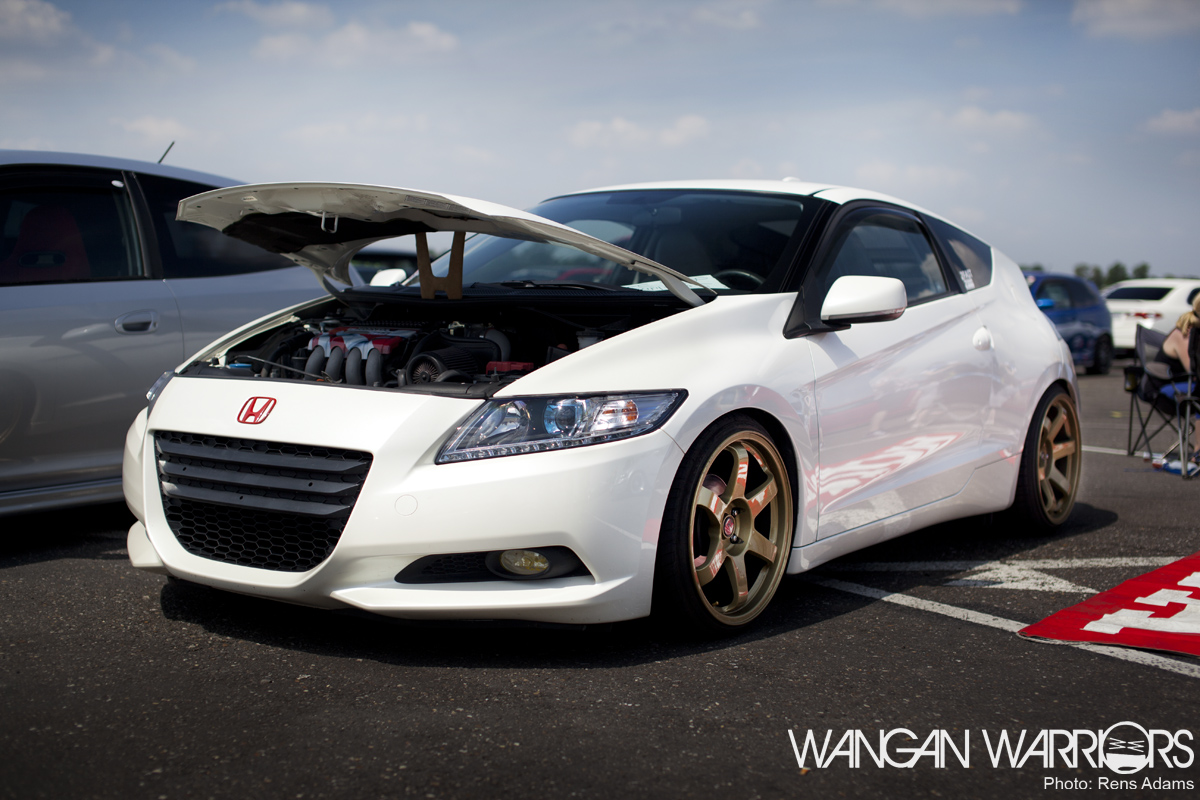 As we were walking over the paddock and snapping our last bit of shots, there were some models which caught our interest and this CR Z was one of them for sure. It’s a good example of a perfect execution to make a less popular type look stunning. 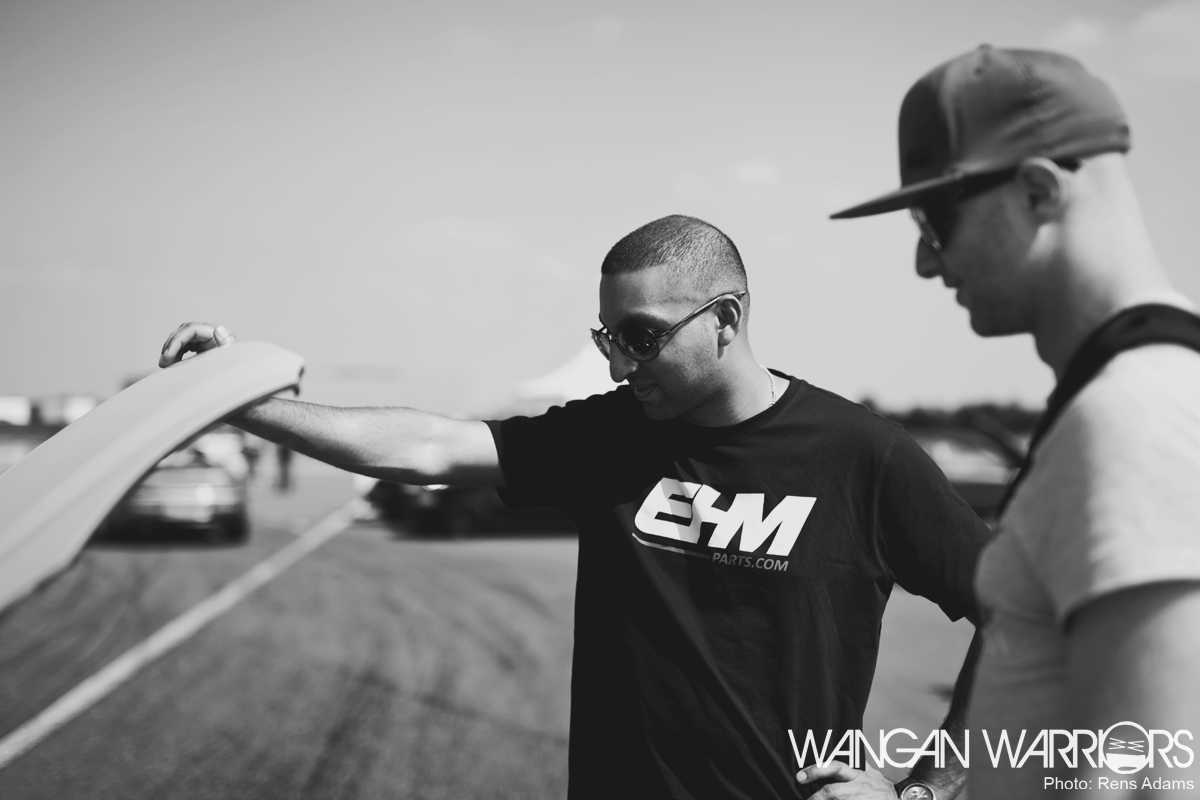 As we were about to pack up our stuff and head out, Wesley Samson of EKGarage brought a very interesting project to our attention. Davinder Plaha from EHM PARTS decided last minute to drive to the Netherlands overnight and was kind enough to tell us a little bit about his Civic. 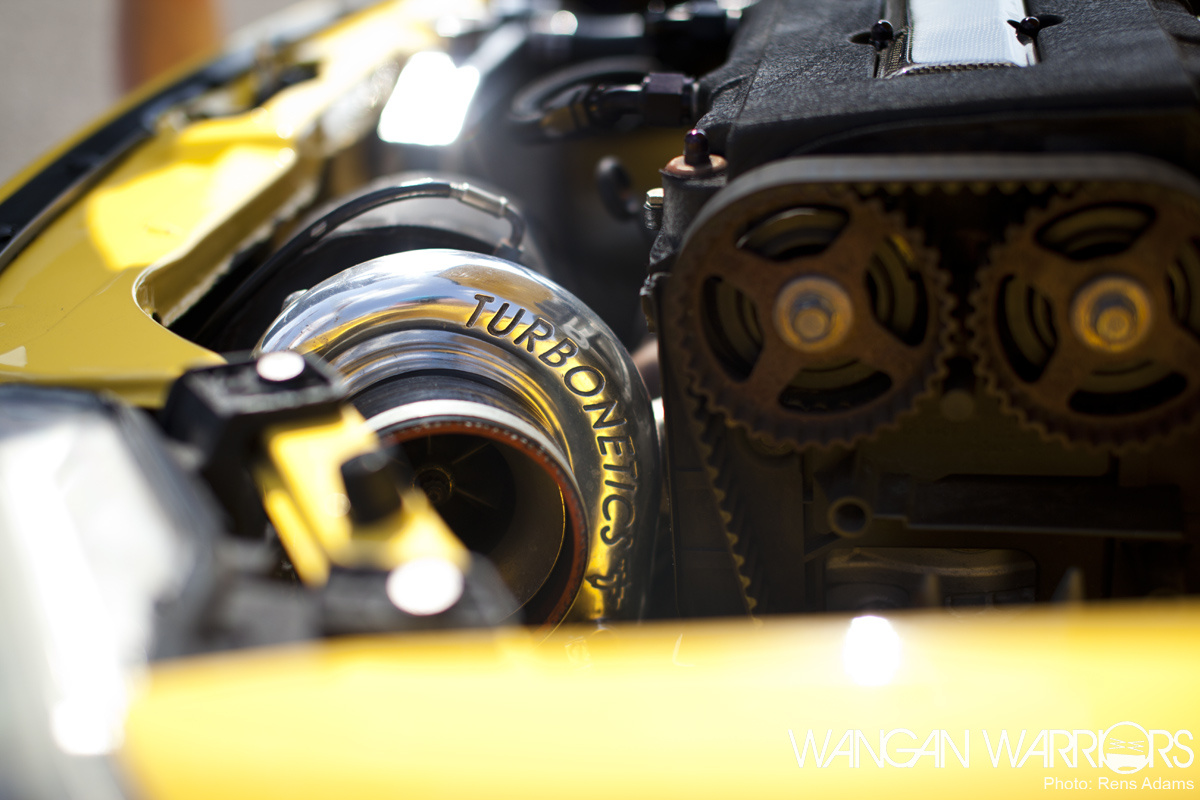 It looked like the perfect sleeper but under the bonnet hides a turbocharged B18 which is good for well over 500bhp. I really hope to see this fierce yellow hulk in action some time because it really isn’t your luckiest day either when you meet this one in the wild. 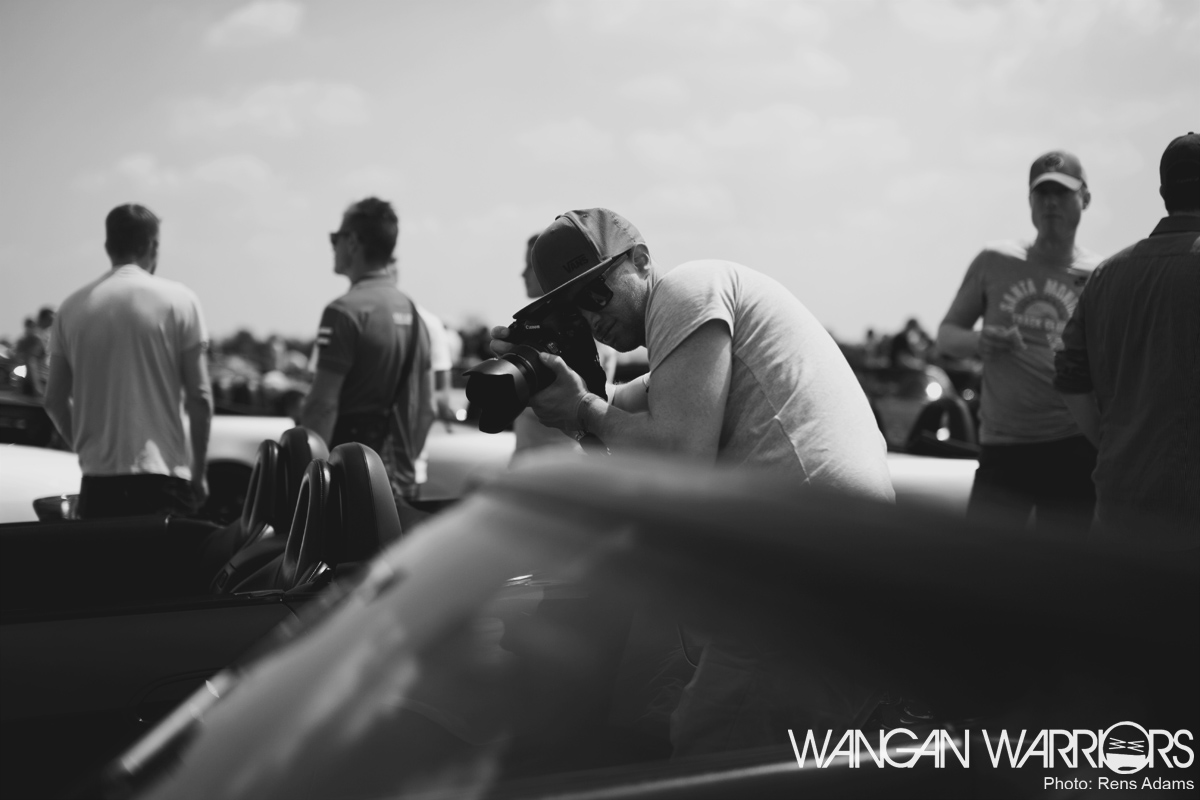 As more and more visitors started leaving the event we thought it was time to wrap things up as well and head back home. There is quite some content coming your way in the next couple of days and weeks and Maurice will make a nice summary of cars that really shined in our opinion and we will also tell you why. Keep checking back for all the good stuff that’s about to come.

Thumbs up for the organisation for this event, we had a good time!