If you’re into cars, and JDM rides in particular, then there are a few events each year that are highlighted in your agenda. Of course there’s the Season opener in Amersfoort (organized by our great team), DMPD (and all DMPD related events) and of course our very own End of Year meeting in Oosterhout. This year marked the fourth anniversary of an event that grows bigger every year! 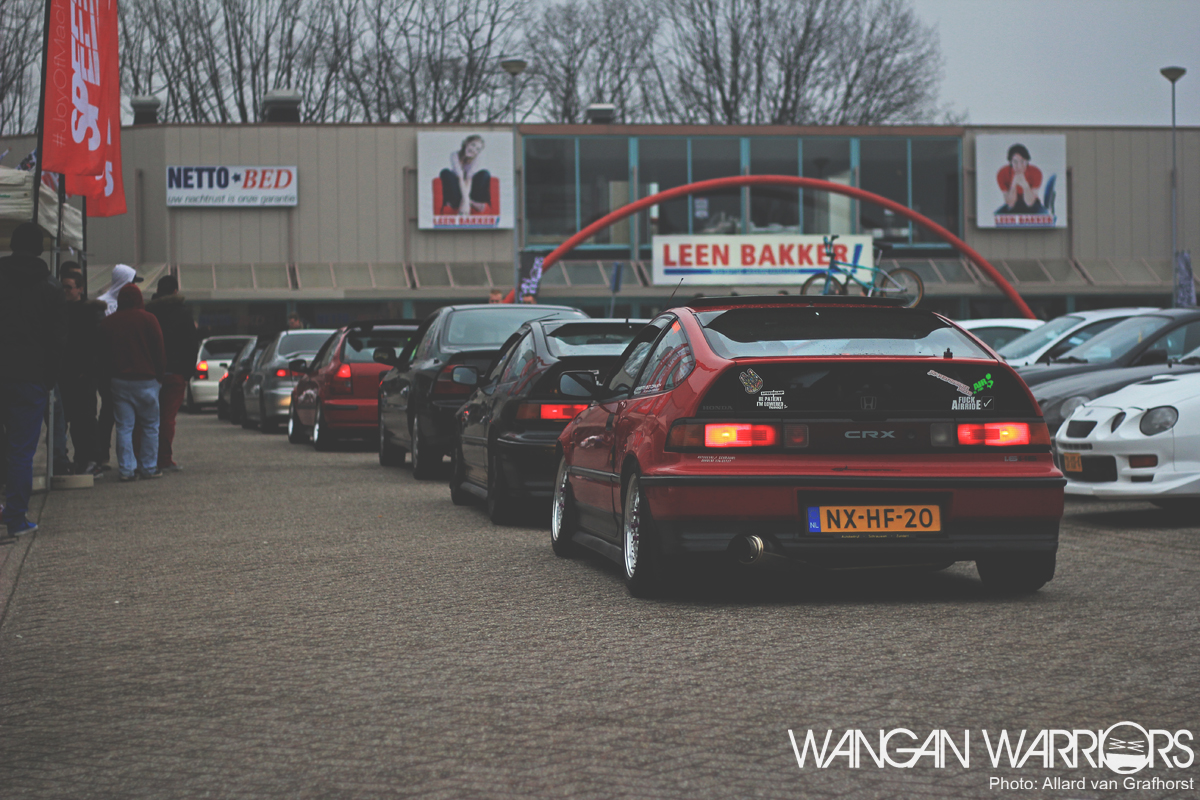 It was already clear prior to the meet that it was going to be a busy day. The registrations poured in as soon as the End of Year FB page was launched! And it sure showed as the official start was at 13:00 hours but cars where already arriving way before 12:30! 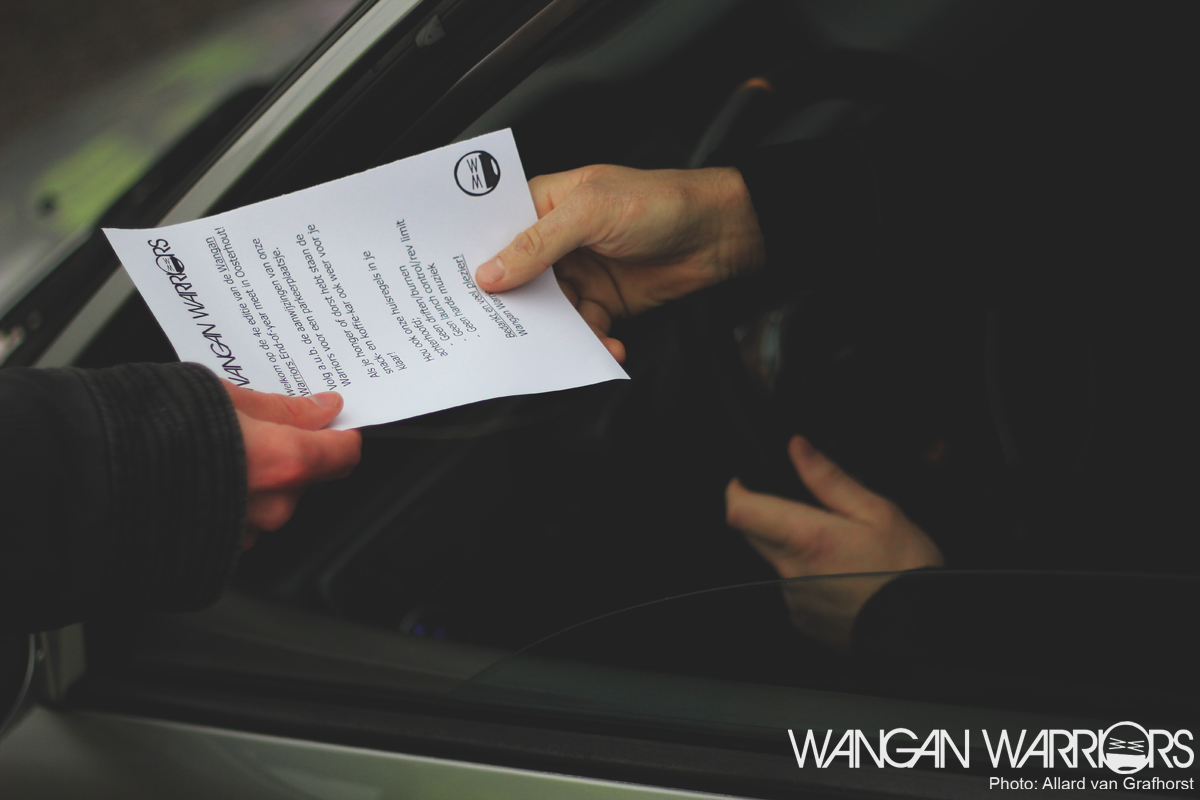 We presented every visitor/car entering the premises with a small sheet of house rules. There’s a simple reason why we did that; We use the location with permission of the shopkeepers and we want to use it again in the future. And we can only do that with your co-operation. And I must say, almost all of you behaved perfectly so thank you for that! 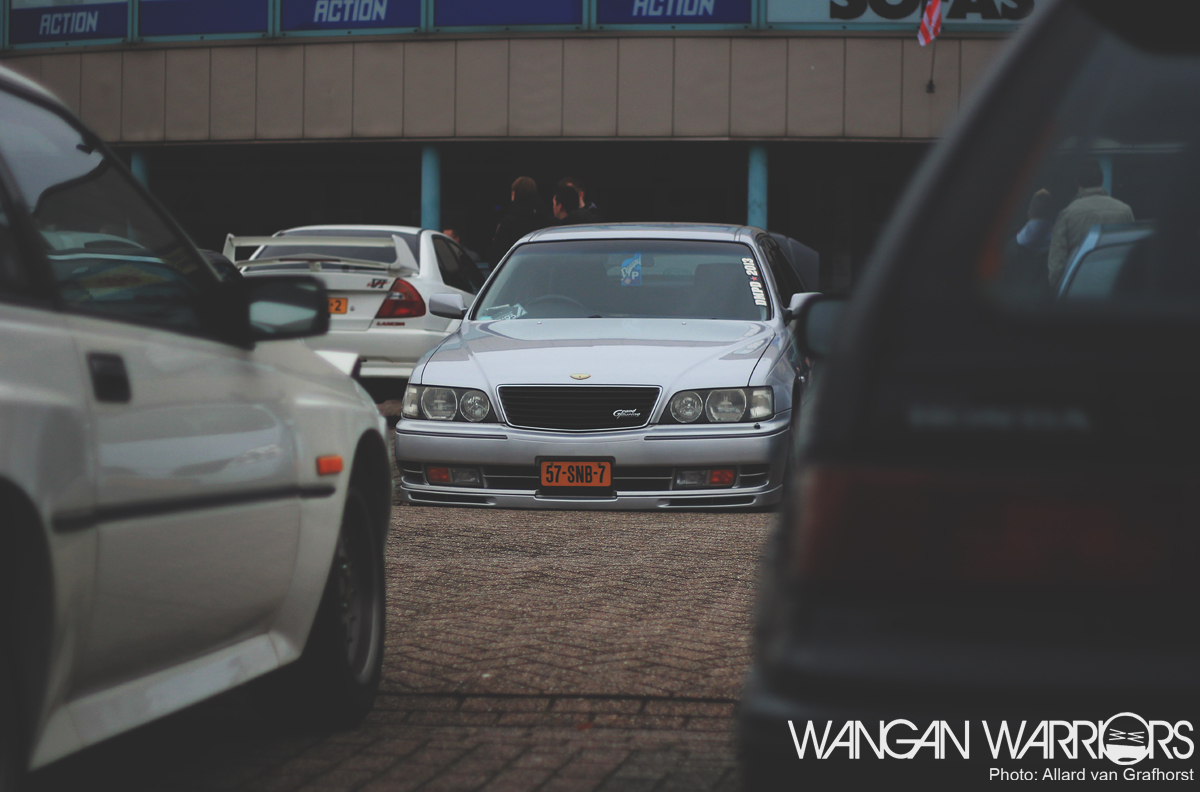 It’s always nice to see familiar faces at a meet and Barry’s Cima is no exception. He’s actually one of the guys responsible for the Cars and Coffee meets held in de Meern every third Sunday of the month! It’s also a great excuse when your not in the mood for that visit from your inlaws. 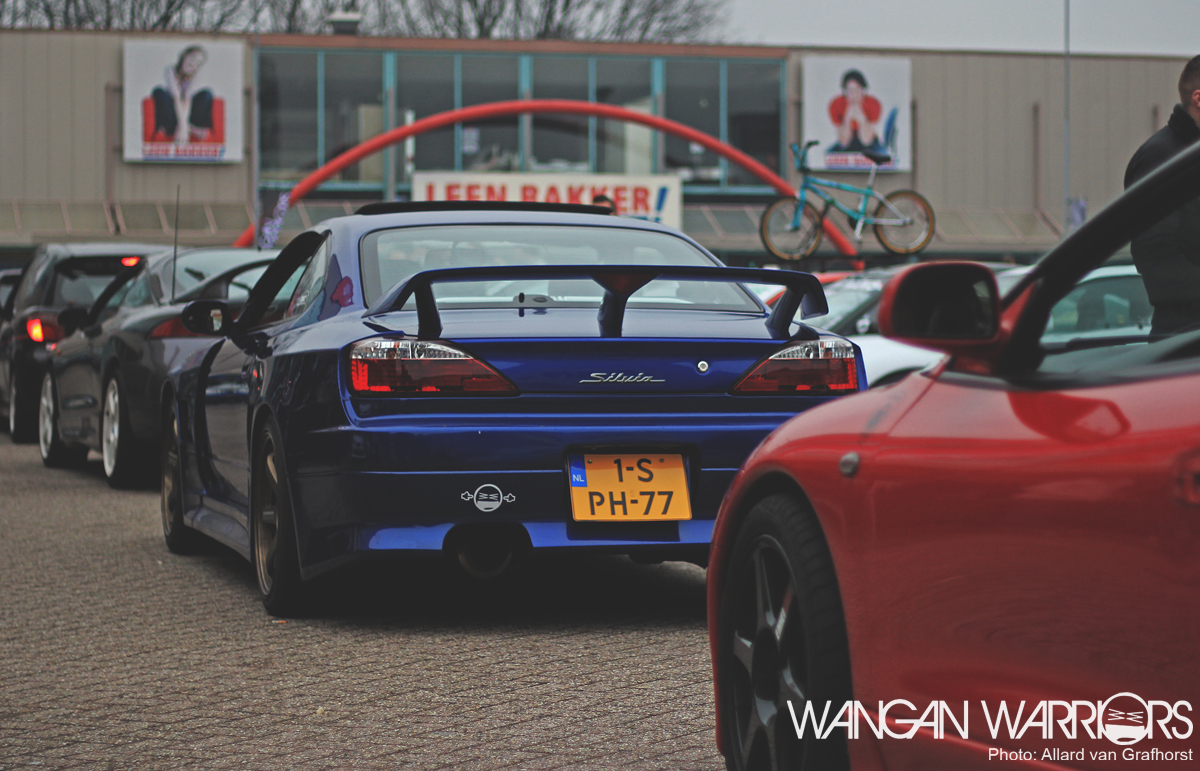 But next to familiar faces there where plenty of cars I had never seen before. Like this beautiful widebodied S15 spec-r. Not only did it look good, it seems that it packs quite the punch under the hood! I believe my colleague Maurice already has planned a shoot with this monster! The bastard… 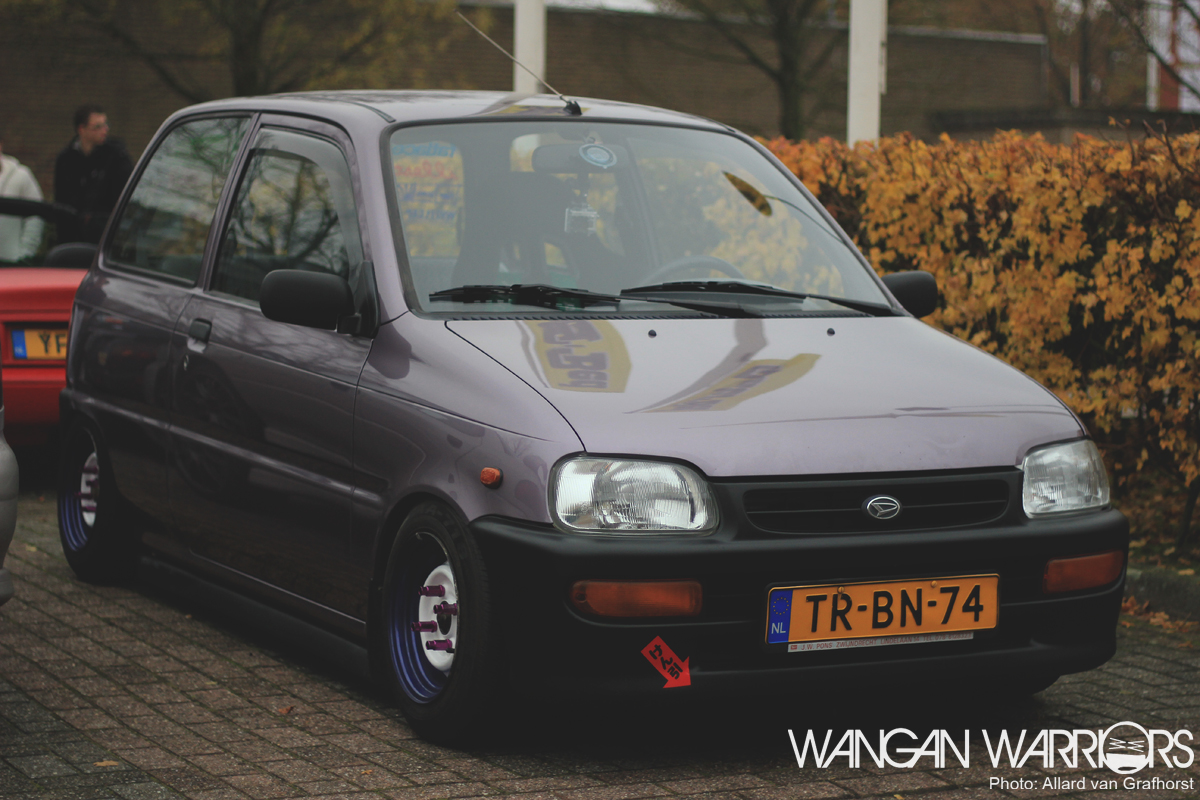 Another first for me was this little Daihatsu Cuore. (Editors note; correct me if I’m wrong! I’m not really at home in the Kei car department.) I’ve seen little beaters like this on the road in Japan and they are pretty popular over there because they are cheap to run and maintain but I must say it looks pretty good on Dutch roads as well. 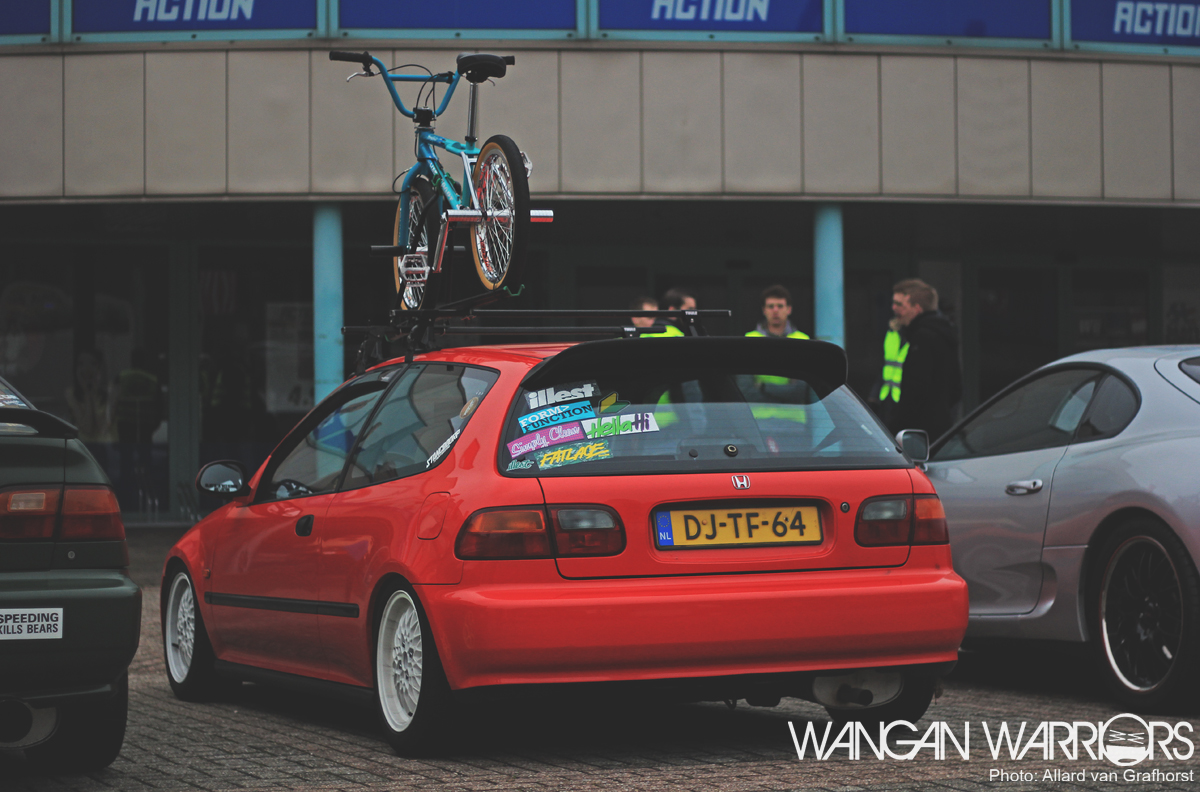 Love it or hate it but I think we could do with some more USDM flavor in the JDM scene! My buddy Youp is a big fan of the Kanjo racers in Japan but he also loves the USDM inspired roof rack + BMX. I love stance, performance, drift, you name it! But there’s something about a BMX on top of a car. 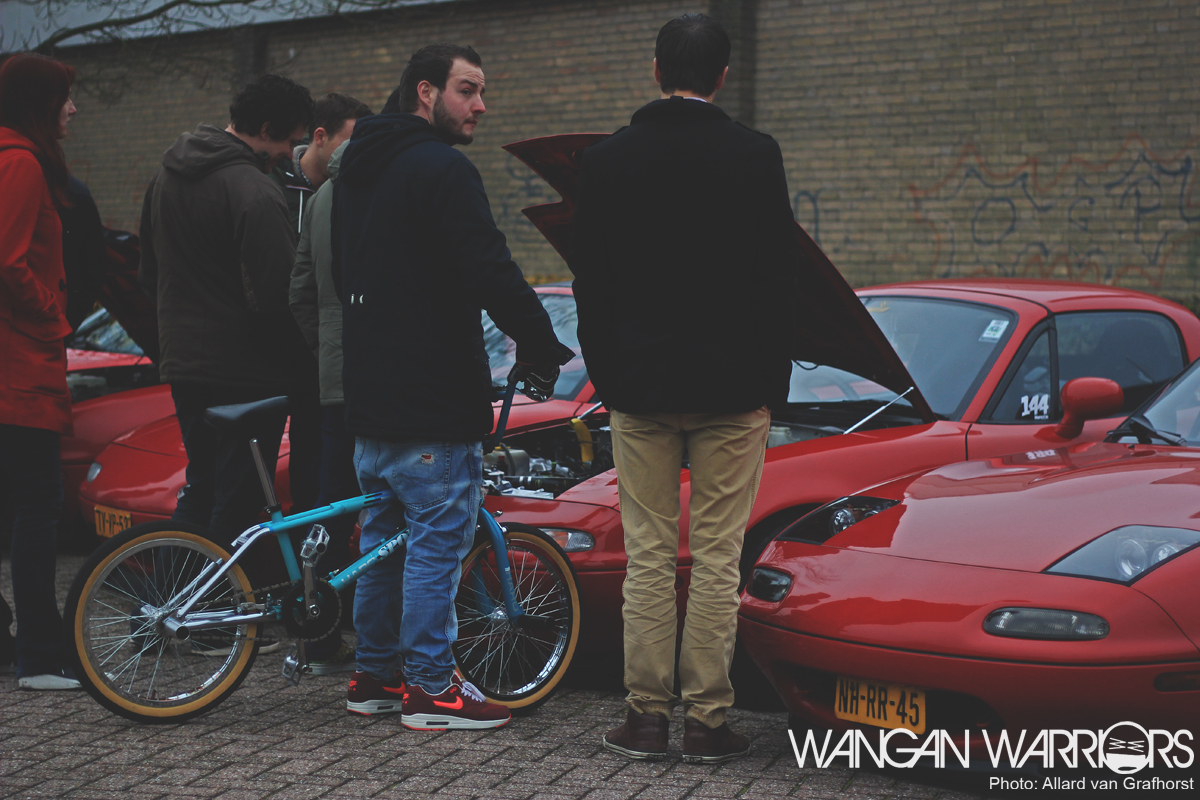 And yes, he puts it to use as well! It sure is the quickest way to get from one side of the meet to the other. That’s Bop’s rotary powered Miata they are checking out by the way. And speaking of Miata’s… 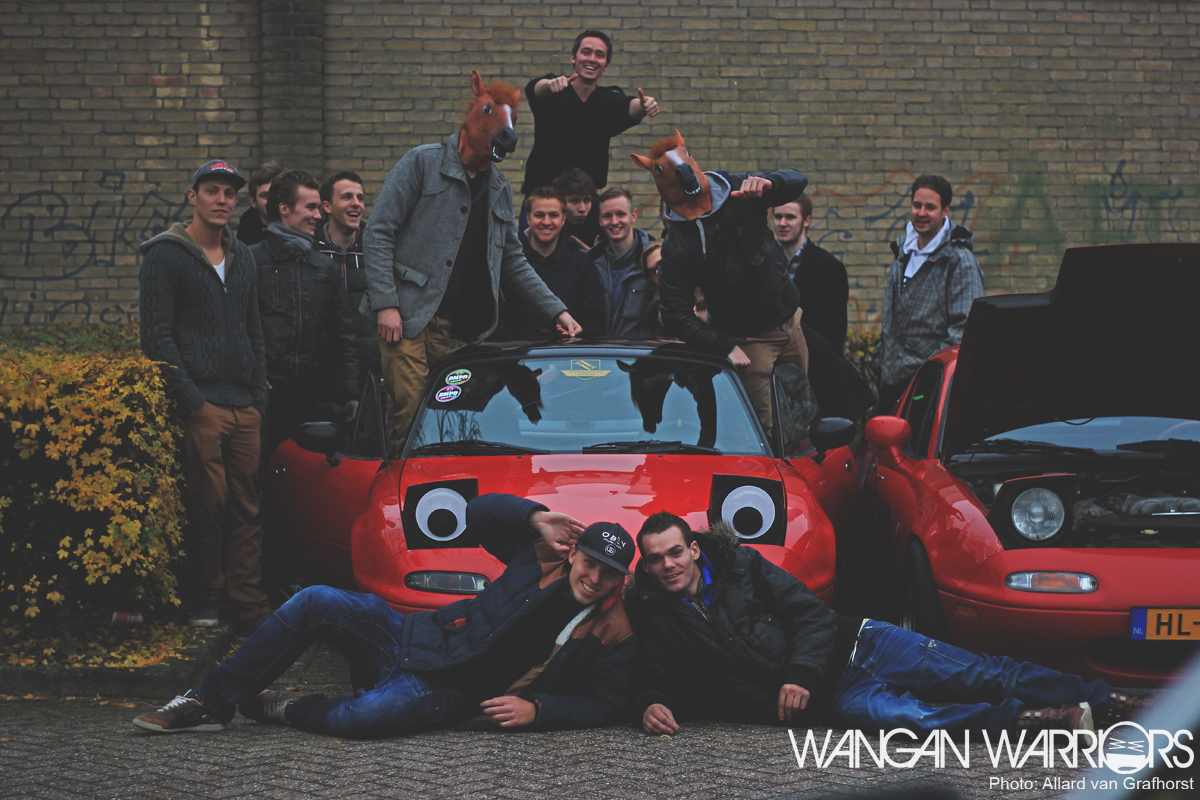 The Roadster crew (a.k.a The we-love-my-little-pony-but-we’re-to-afraid-to-admit-it-so-we-drive-miatas-instead crew) was out in full force as well! But who am I kidding… I love miata’s as well! In fact… I just picked up a project a couple of weeks ago but more on that in another blog! 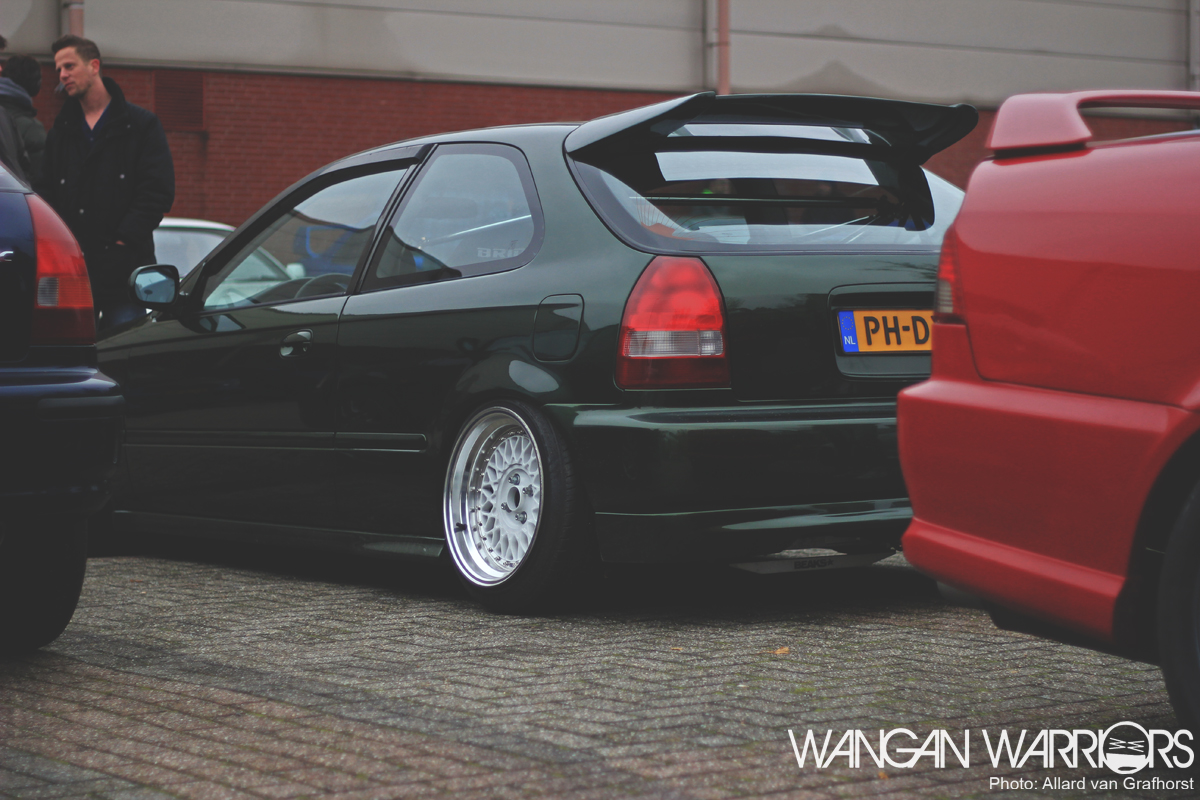 I spotted this rather clean Civic opposite of the Roadster crew. I’ve seen this before car at DMPD and it’s really growing on me. Not sure if it’s the color or the perfect amount of wheel tuck but I really like this car. 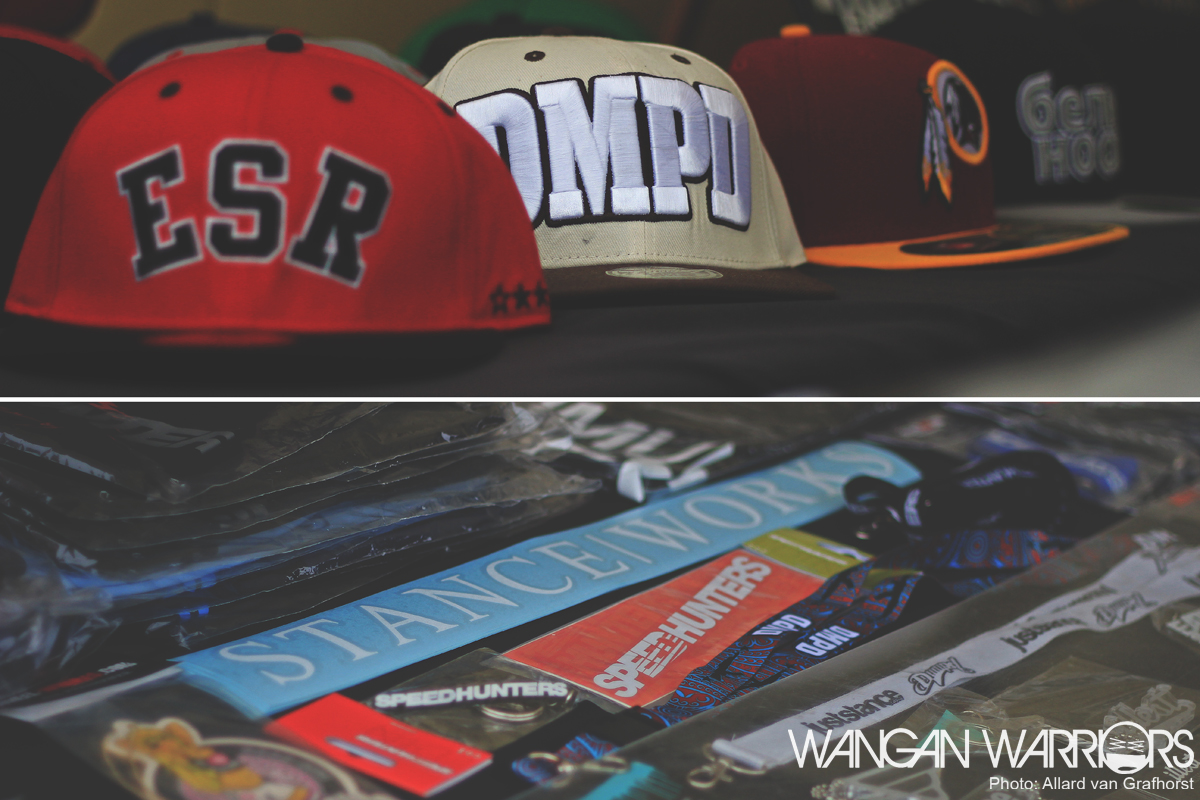 Our good friends of Stickerdump where also present and they brought along more than “just stickers”. They are official dealer of New Era caps, Fatlace, Illest, StanceWorks and much, much more! It’s always a pleasure when they are around and don’t hesitate to ask them about custom sticker work! 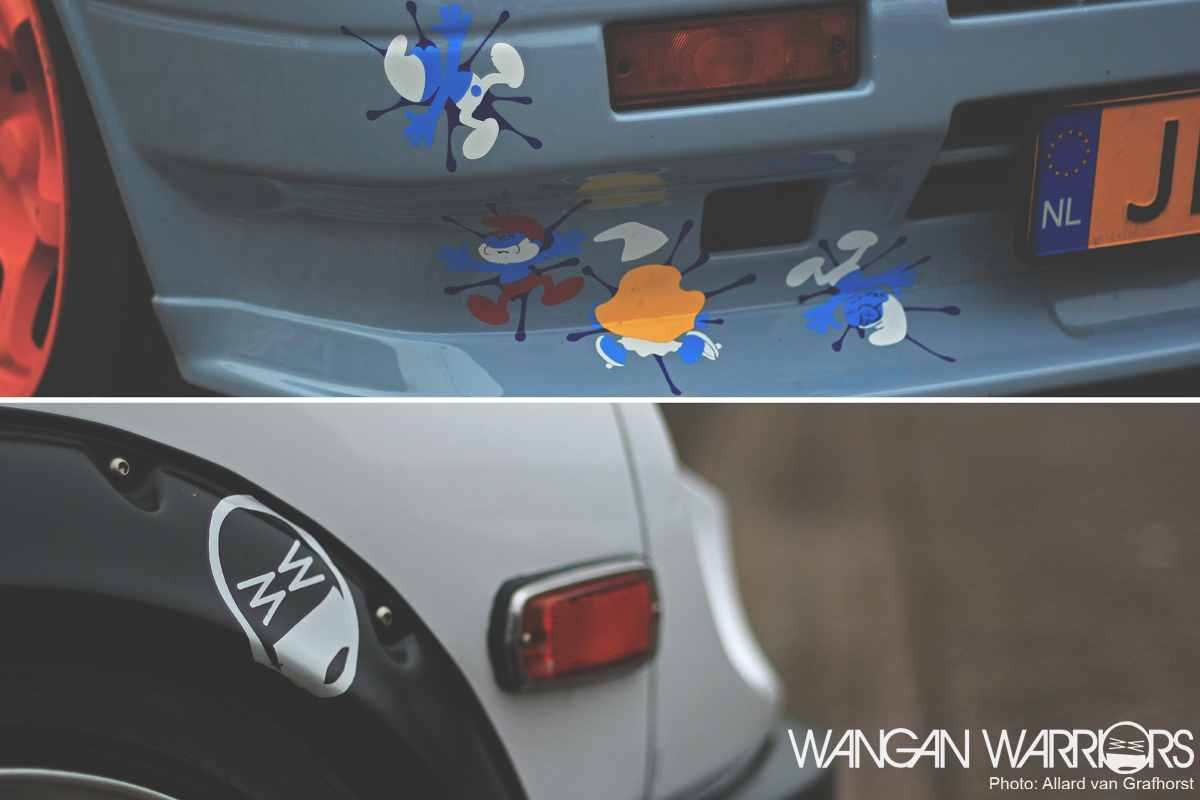 It’s good to see that people try to stay original when it comes to stickers! I love the placement of our logo on the overfender of Robin’s 260z. The killed smurfs made me a little sad though. You really have to do something about your roadrage Aram! 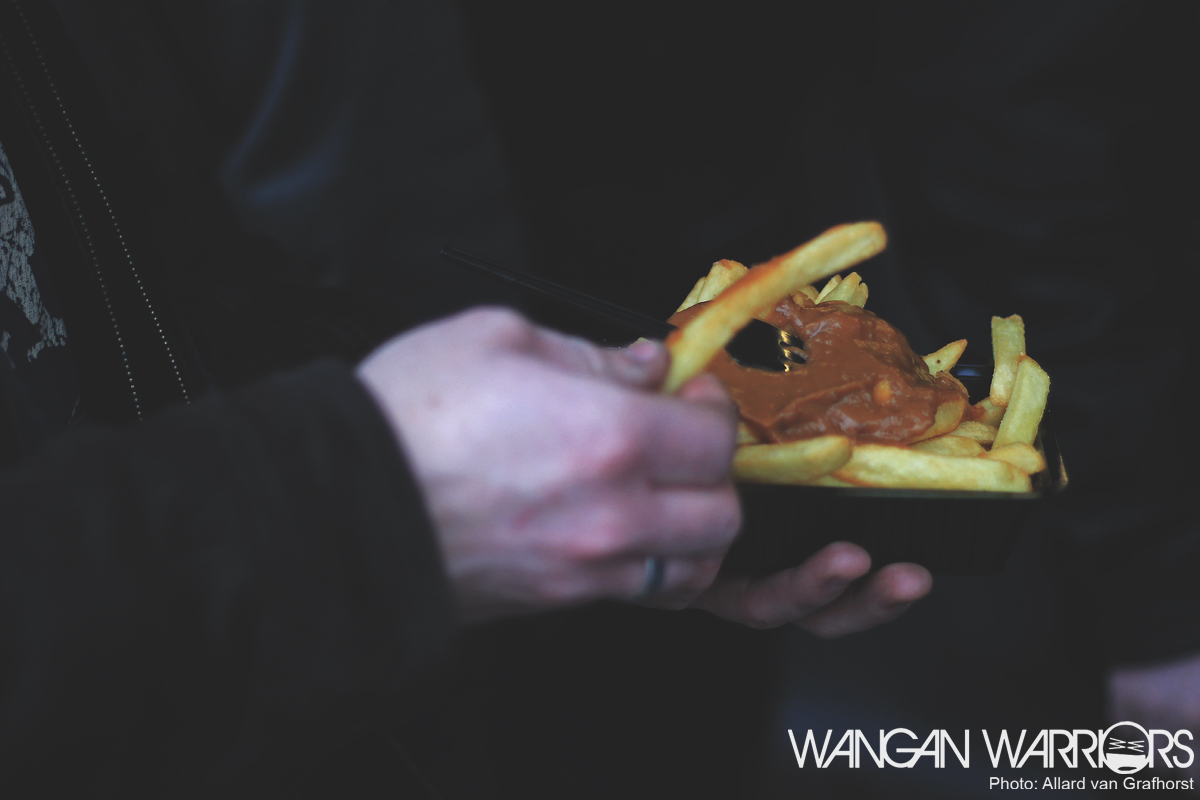 We didn’t forget about the inner man as well! Food and drinks where provided by the kind folks of Snackmobiel

as they have done the past few meets and we would like to thank them for that! 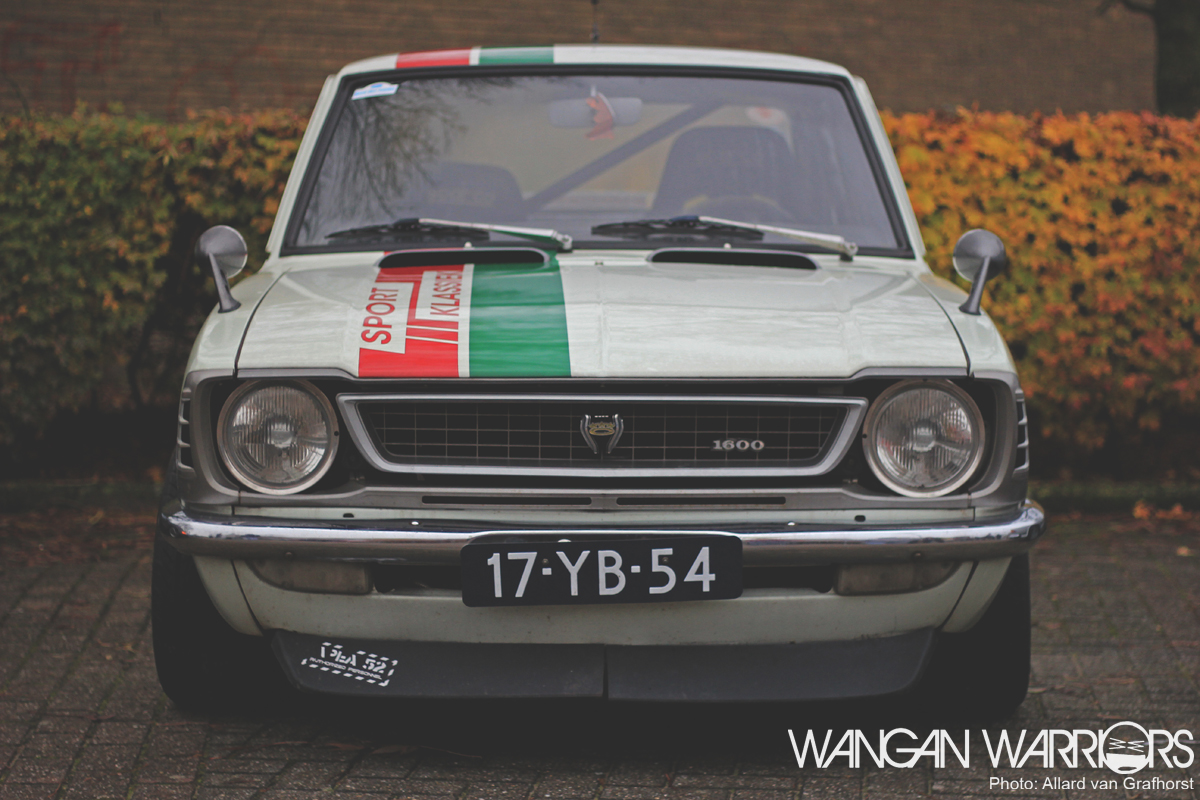 I love this little old Corolla! It’s not “just” used for shows, the owner still uses it for Bergrennen and trackdays. It’s good to see this little beauties out and about. 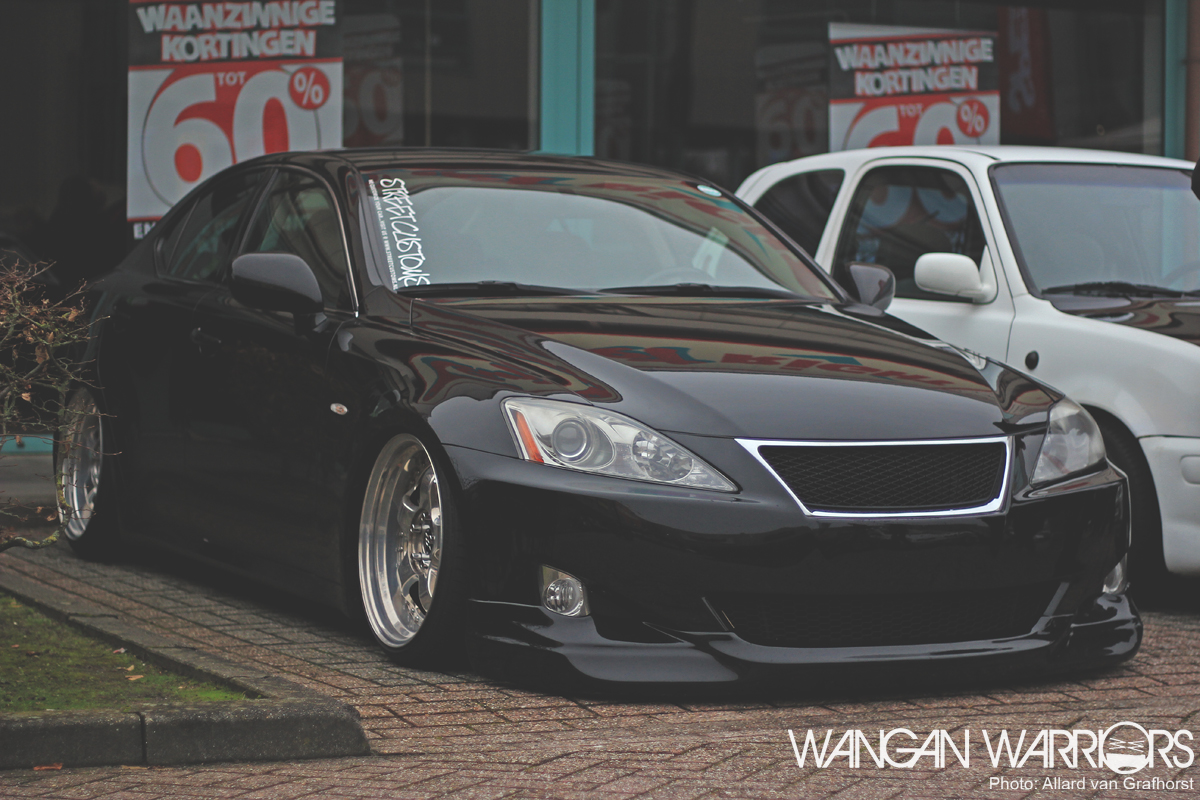 Thanks to cars like that little old Corolla we now have cars like this beautiful, bagged, Work Meistered IS250! For me, this car ticks all the right boxes in the Bippu (V.I.P) department. Well done sir! 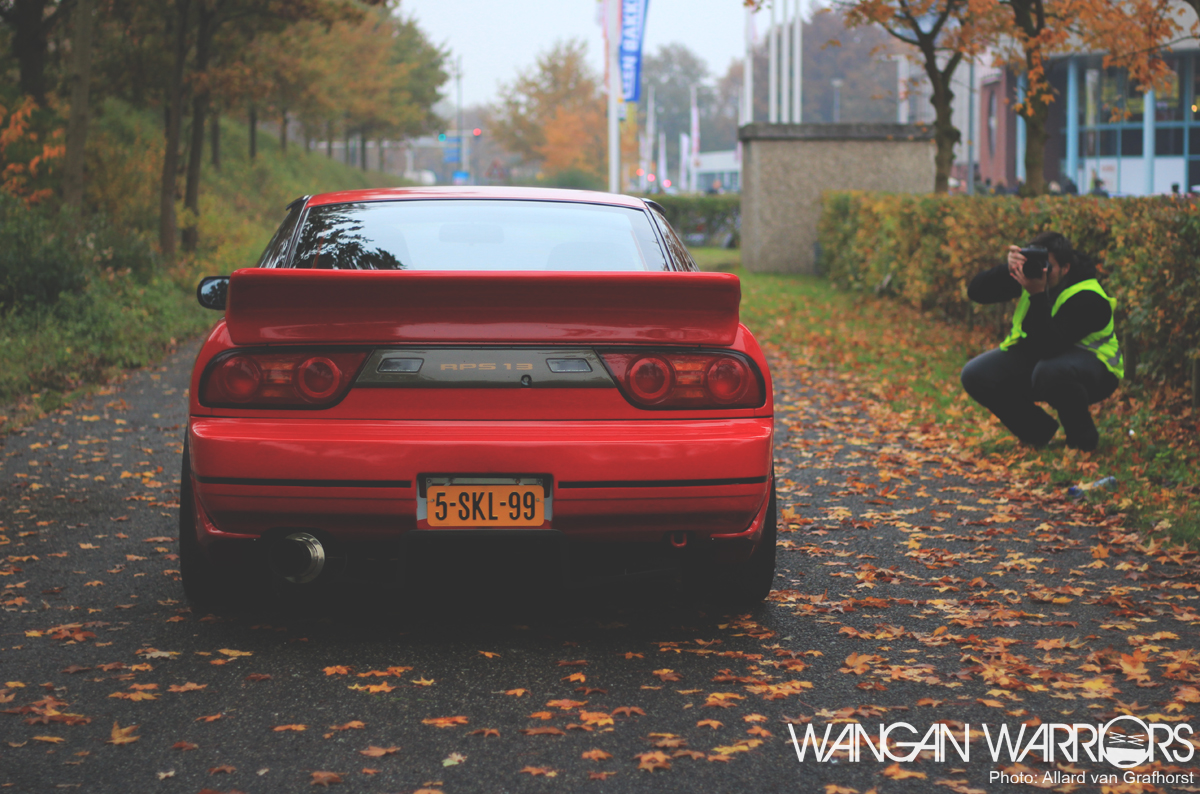 As I was making my way trough all the cars parked in the meeting area, my colleagues Alex, Rens, Vincent and Maurice where picking out cars for individual shoots. You can expect a lot more meeting coverage in the coming days and even weeks as I’ve seen them shoot some pretty serious JDM metal! 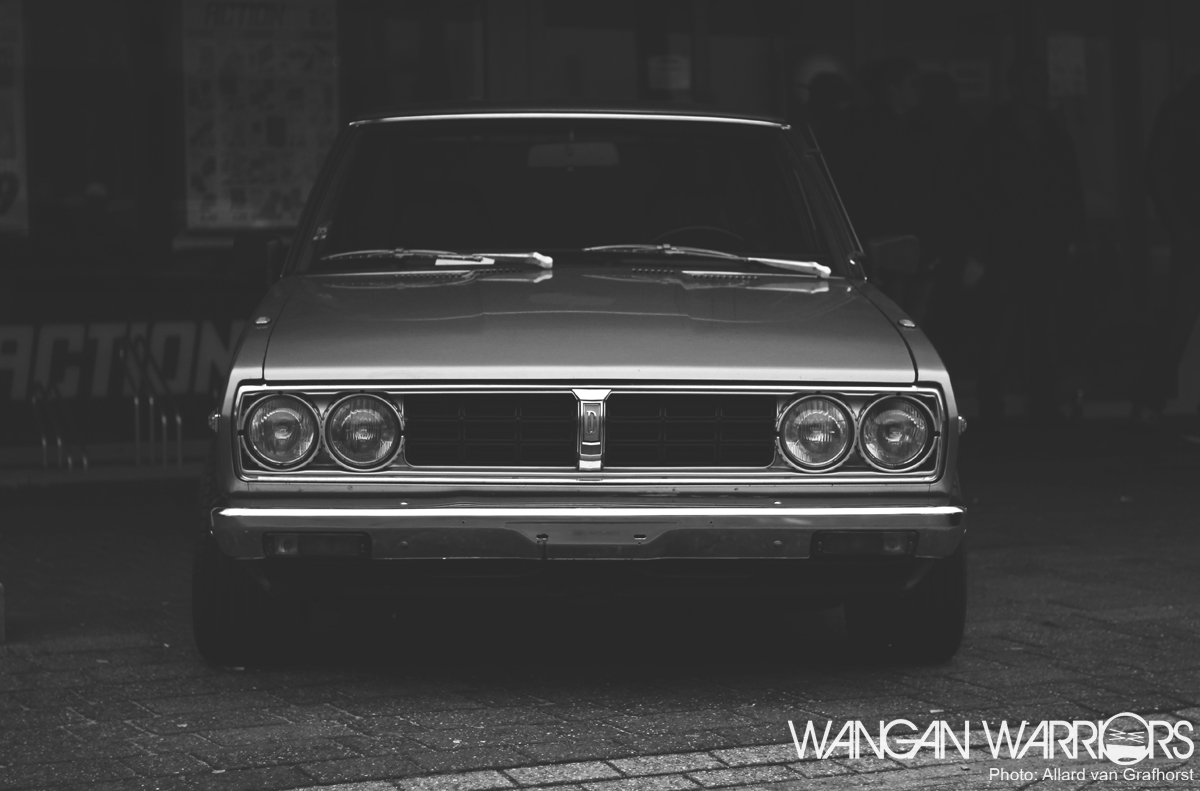 I’d like to conclude my coverage with one of the coolest cars of the meeting in my opinion! I’d never seen a Datsun Violet in the flesh before and this one also sounded orgasmic! I think that had something to do with the two Solex carburetors… 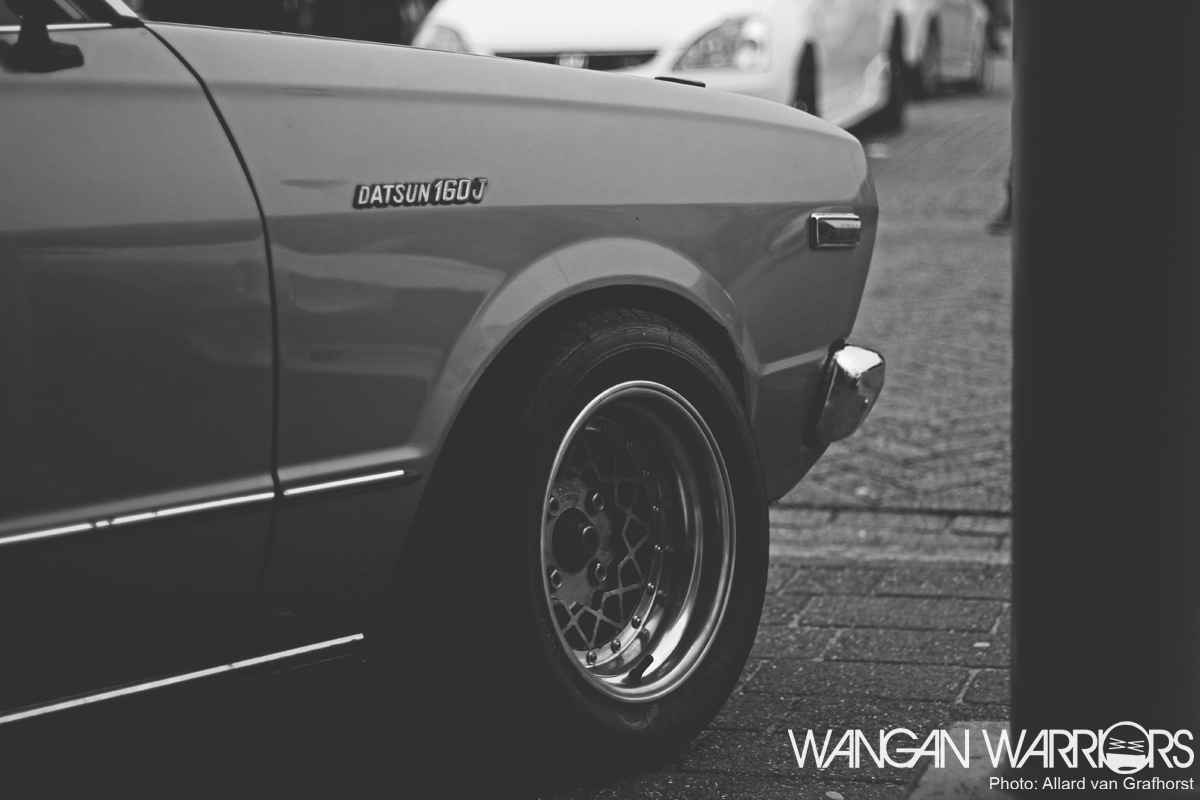 … while it’s visual appearance was supported by a clean set of Ally Cats! It wasn’t the cleanest, wildest, fastest car of the meet but to me it sure was on of the dopest! 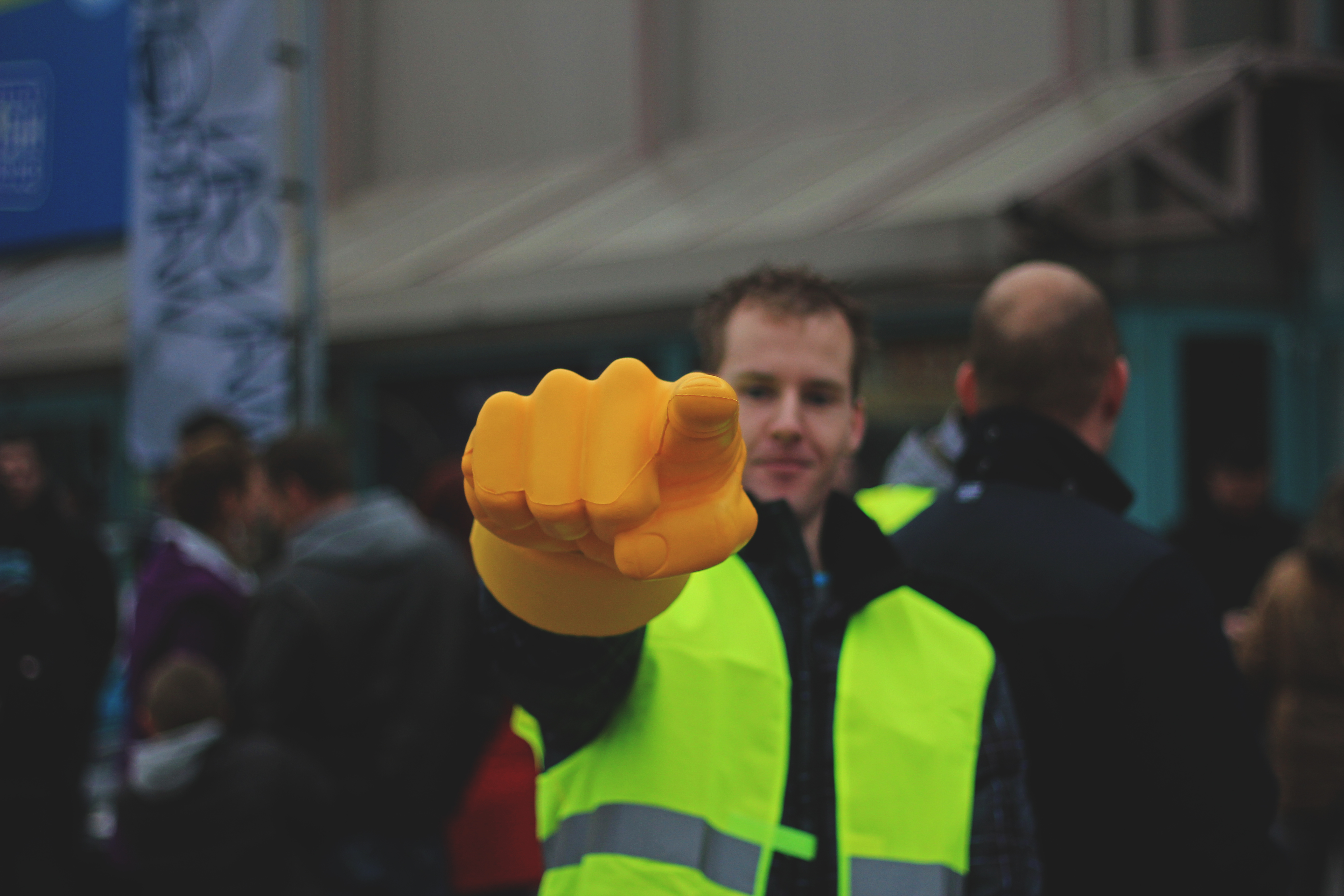 I think it’s safe to say that the fourth annual End of Year meet was a great success! We can organize everything perfectly but if nobody shows up then what’s the point right? Well, we had OVER 400 (!!!) cars attending our meet!!! Now that’s a number some people could only have dreamed of a couple of years back. We have to thank you all again for coming (and behaving perfectly)…

… and we want YOU to be there again in the following meets/events/years to come!