No one in his right mind would organise a car meet in november. By then, many cars are already in storage. Safely tucked away or completely disassembled for some modifications, both big and small. And don’t forget the weather. Will it be wet, cold, snowy, foggy or a combination of all these? But then again, we are car freaks. So why wouldn’t we organise a car meet in november? 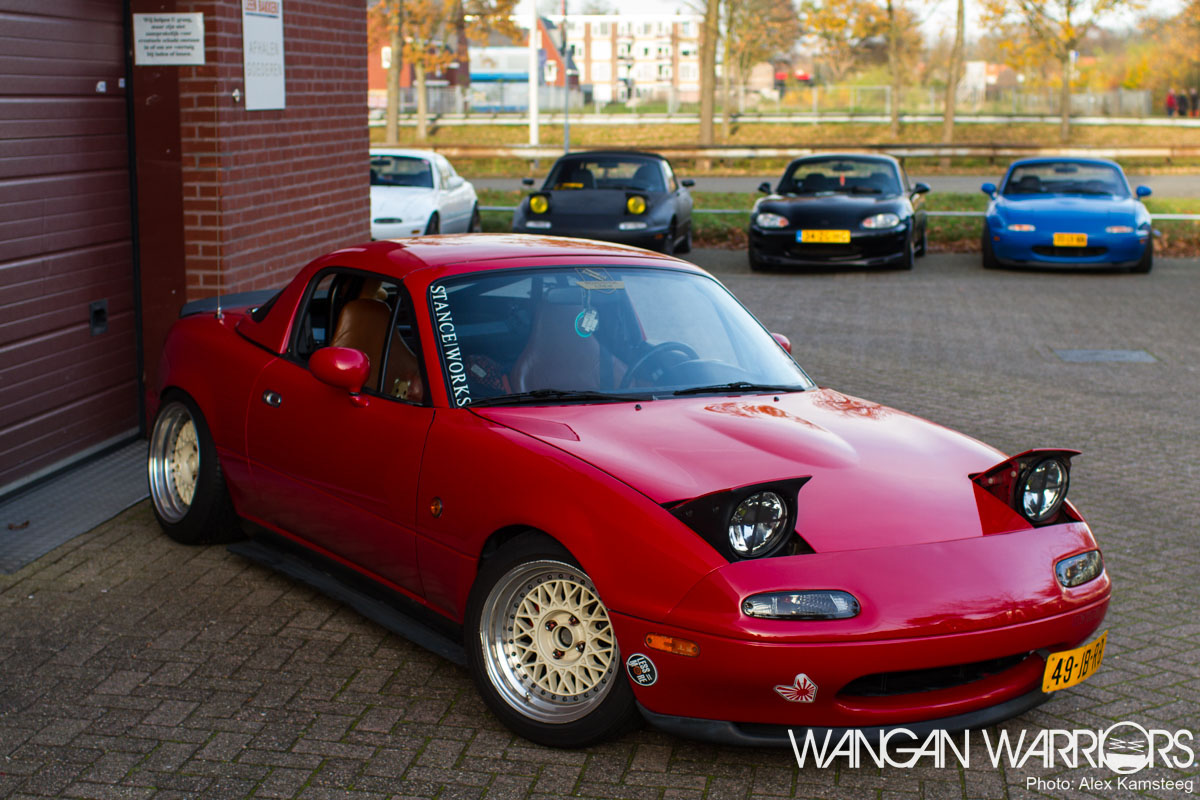 And so, five years ago, the Wangan Warriors End of Year meet was born. And what started out small apparently hit a nerve. Year after year people show up in ever greater numbers, with 451 cars on the venue this year. That is a record for us and since we only allow Japanese cars it shows how big the Dutch car scene really is. 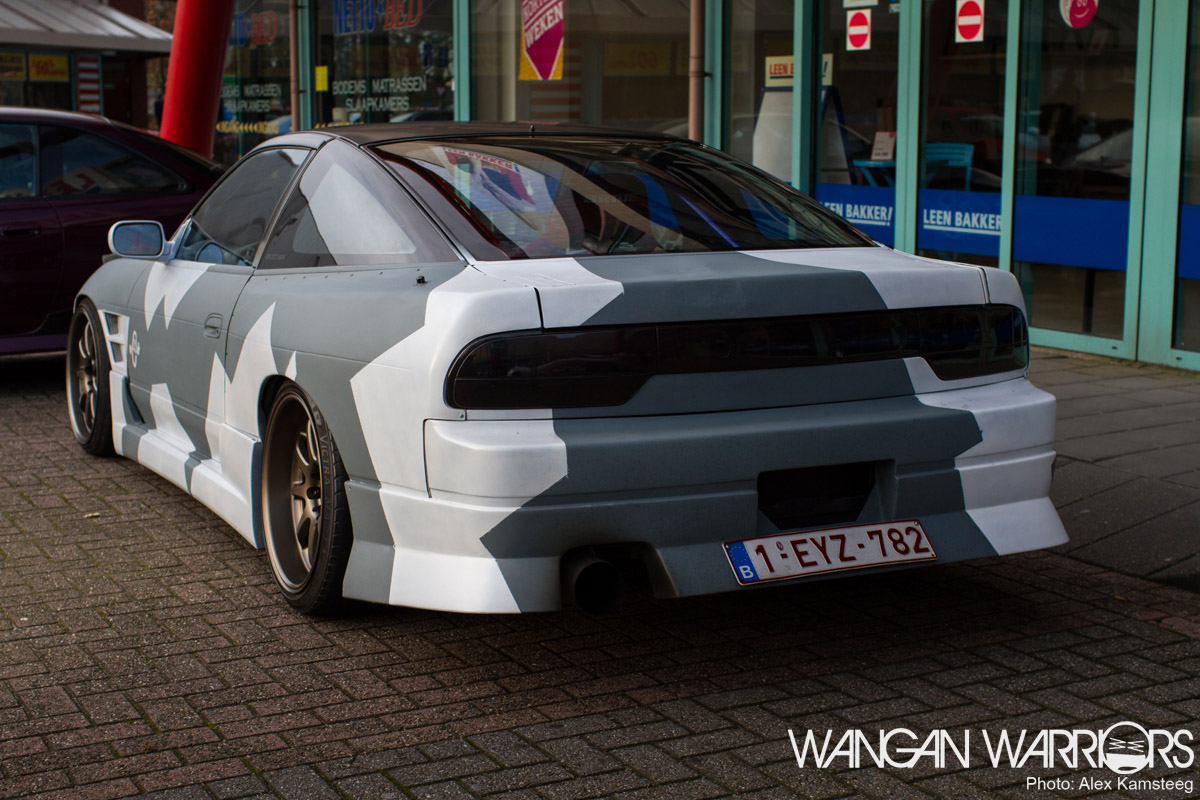 But it’s not only a Dutch meet. Every year there are large contingents of Belgian and German cars. Traditionally the meet is organised in Oosterhout, in the south of The Netherlands and relatively close to Belgium, and quite a few cars with red-on-white plates cross the border to attend the meet. A large group of Germans are quickly becoming regulars too, with many nice cars. 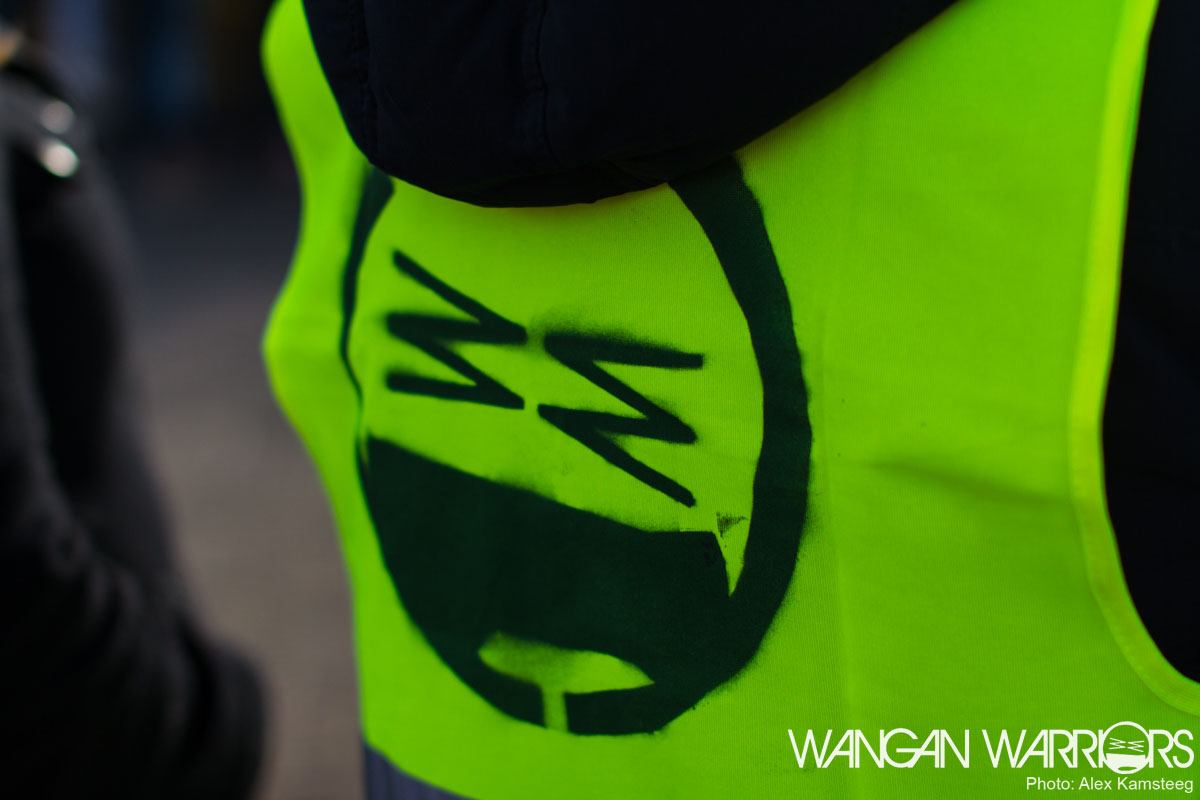 By now organising the meet is serious business. We can’t just call up someone who owns a parking lot, put an announcement on Facebook and wait for people to show up when the day comes. For meets like this we need permits, the official blessing of the local police and friends who put on the shiny limited edition Wangan Warriors reflective vests to help us show people their parking spaces and generally making sure everything runs smoothly. 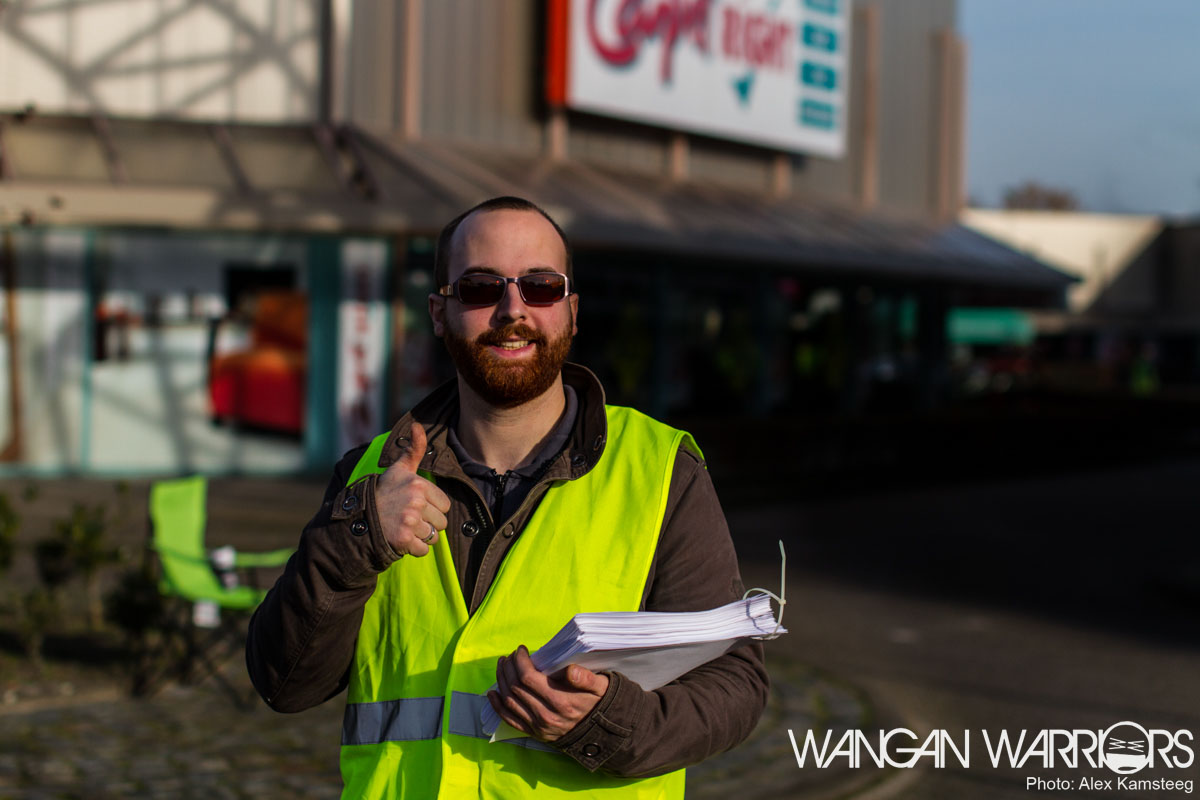 Besides that we arrange for a mobile snackbar, portable toilets, a large stack of papers with the rules to hand out to everyone who visits, garbage bags and many other things. But when the day comes and everything is ready we patiently wait for the first cars to arrive. 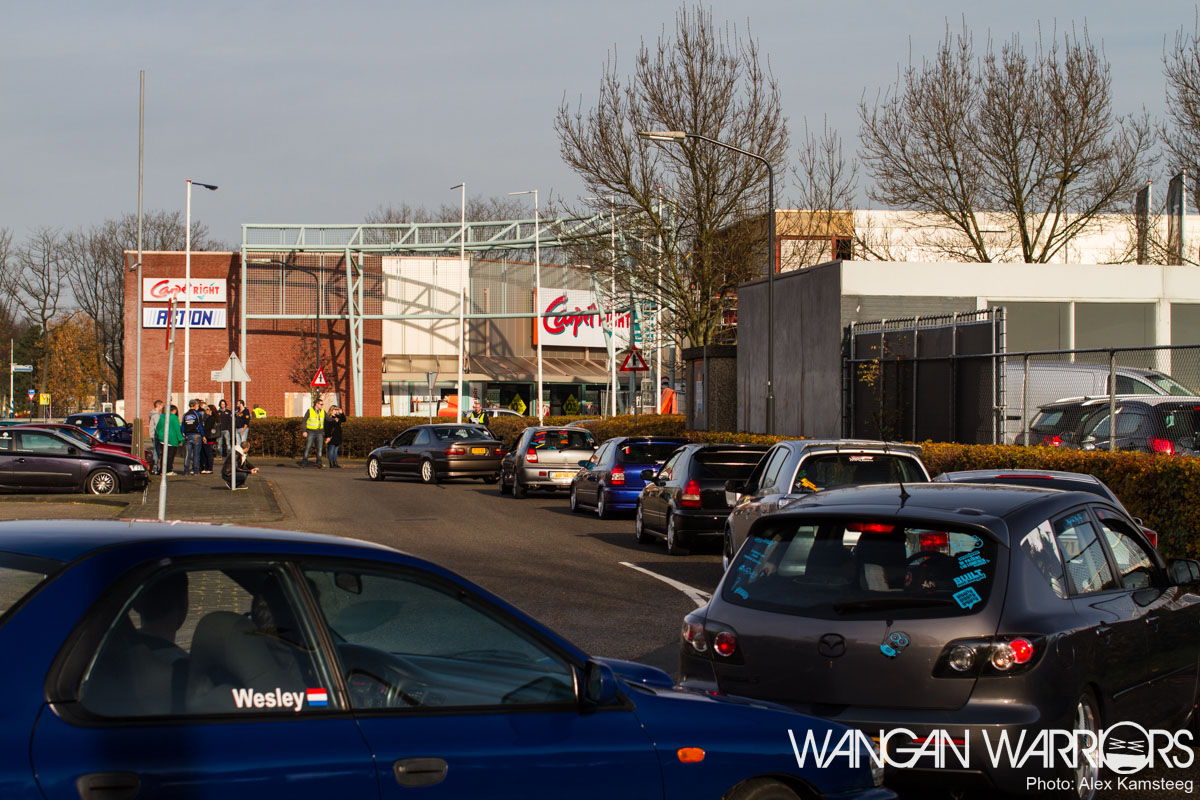 Just like previous years we didn’t have to wait long. While the meet officially started at 13:00 the first cars arrived well before 12:00. In fact, I think most of the cars arrived before it was one o’clock. Last year we caused a huge traffic jam that extended all the way back to the highway so this year we changed some things at the entrance. 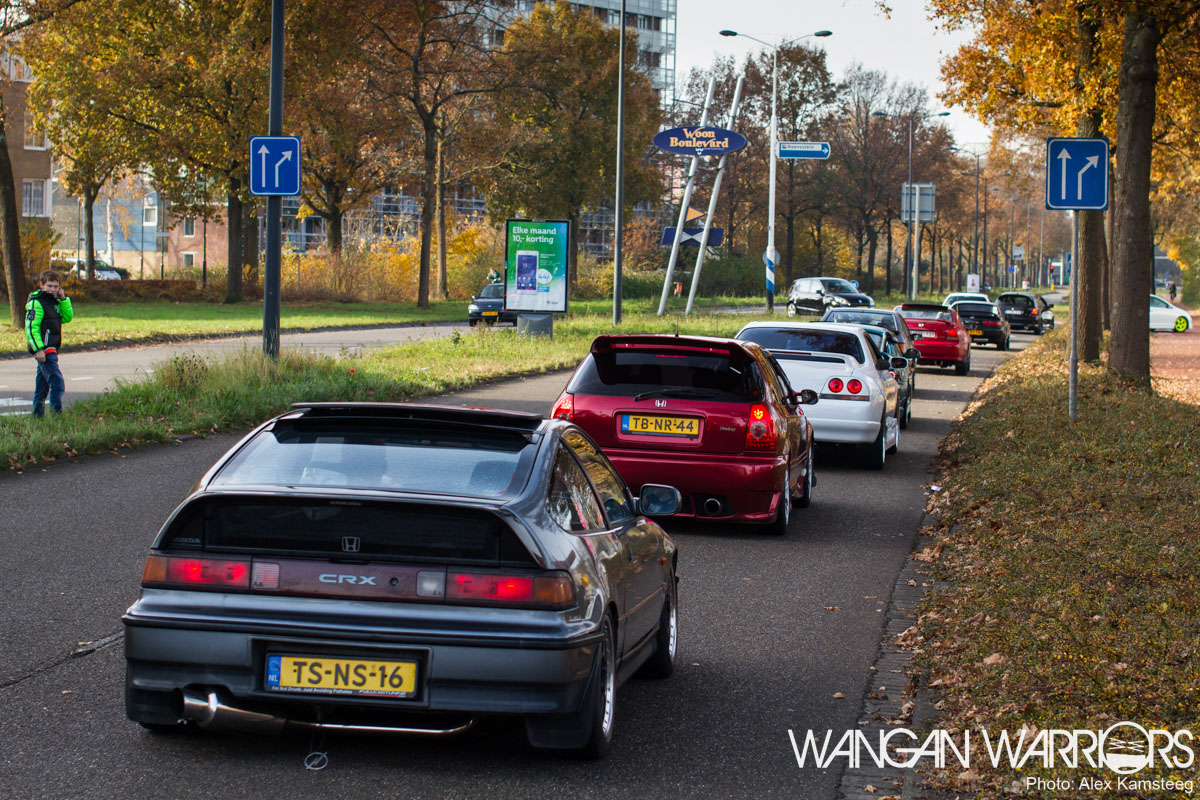 We divided the cars between two separate entrances and at one of them we could process two cars at once. This way we greatly reduced the time people had to wait in line and I’m sure the residents of Oosterhout are grateful we didn’t shut down a part of their town again. 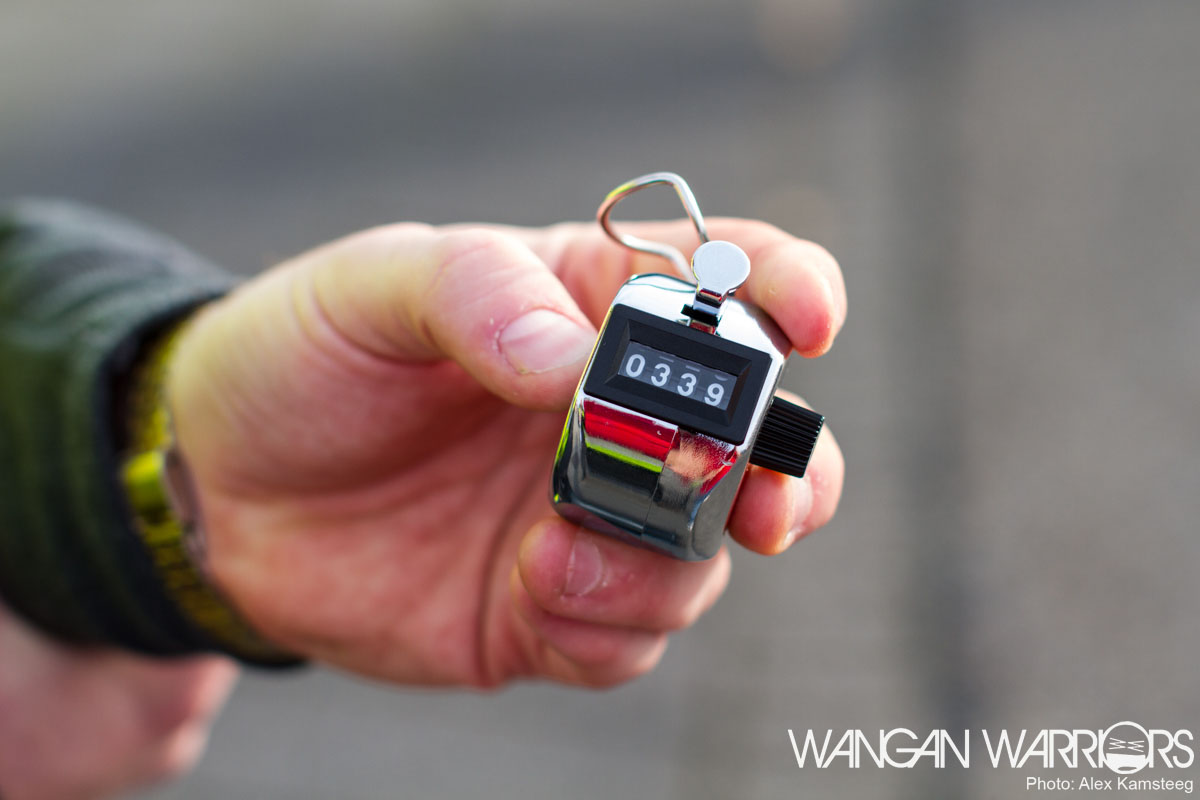 Soon a hundred cars had entered, then 200, 300 and soon we passed the 400 mark. To me that was the sign to finally start walking around on the lot and speak to all the familiar faces I already spotted. I won’t see a lot of people until next year so the EoY meet is always the perfect way for me to catch up with them for the final time this year. 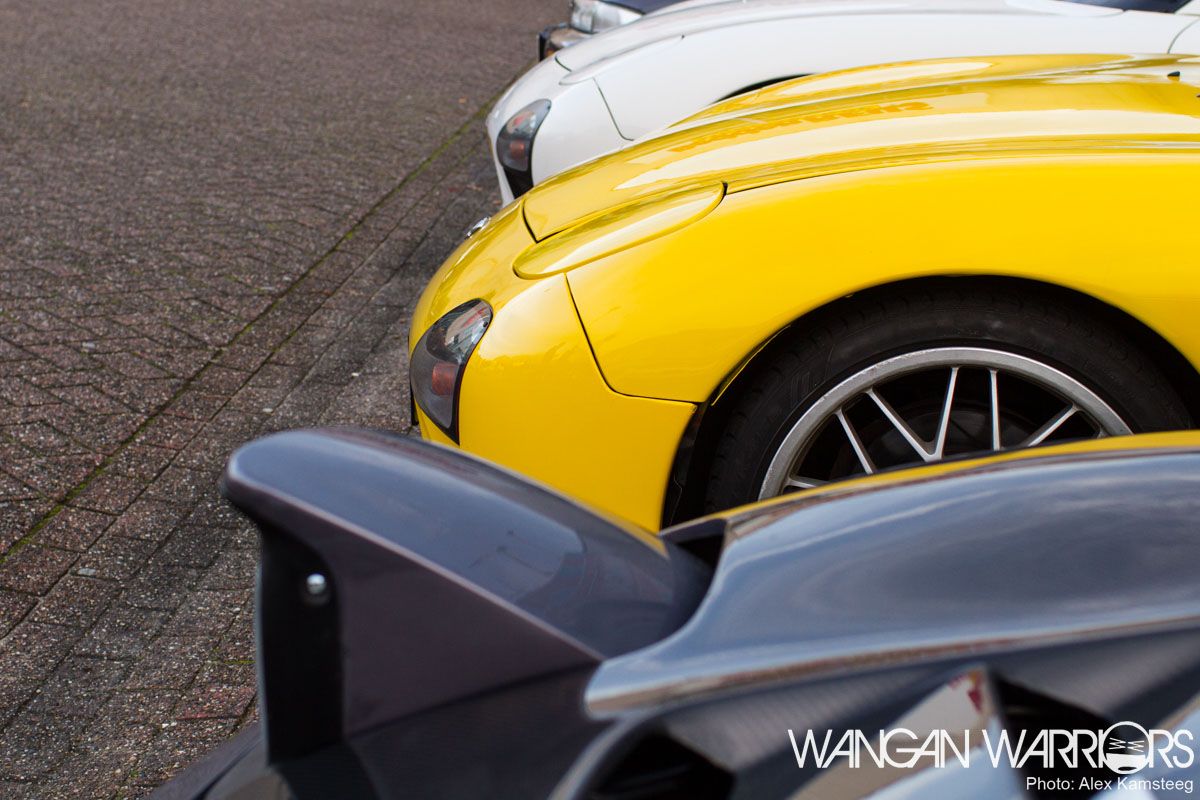 And between talking to countless people I hunted cars. With so many cars in attendance it is always great to see the familiar ones, the regulars that are there every single time, parked between the unfamiliar ones. You can spot trends just by looking at them and when you look closely you can easily make out the little details that make every car unique. 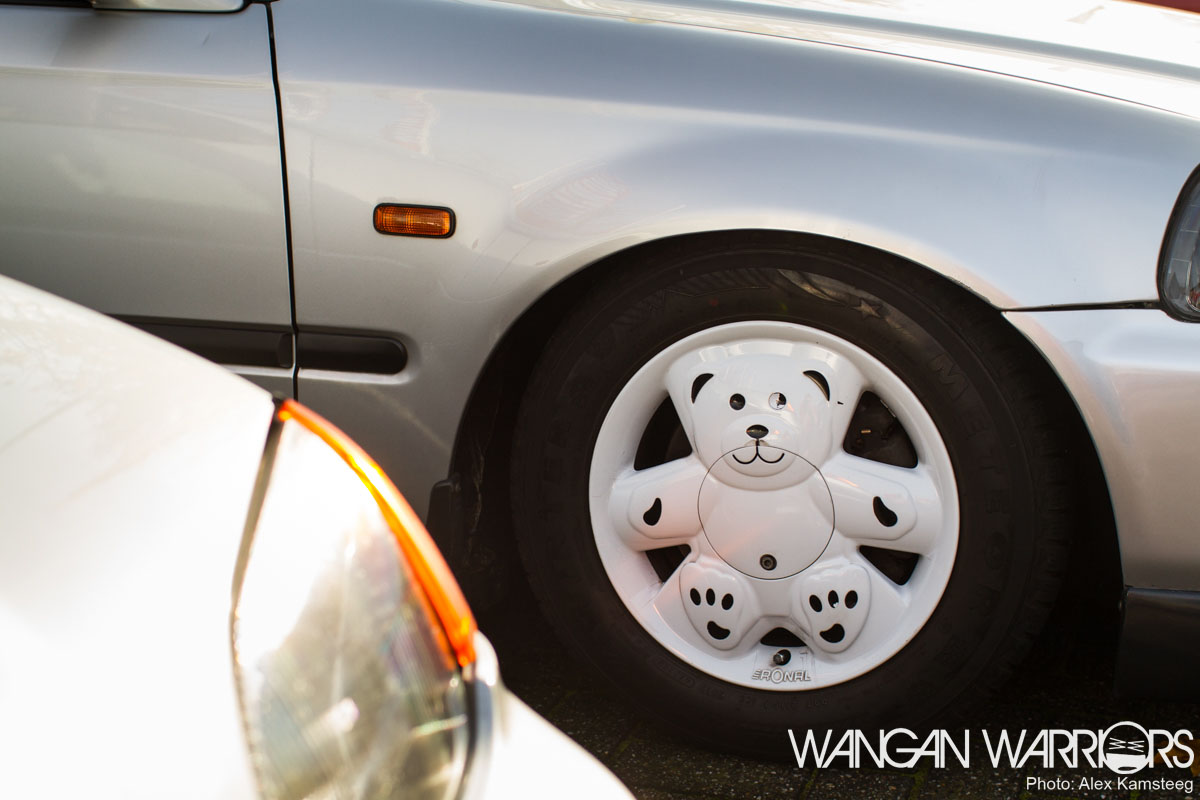 I’m normally not the guy that goes for the bold and in-your-face cars. At every meet there are a few cars that attract everyone’s attention, but I’m always looking for the more understated and sometimes underrated cars. Sometimes these cars are prime examples of craftsmanship and dedication, other times they’re just plain funny. And some are both, of course. 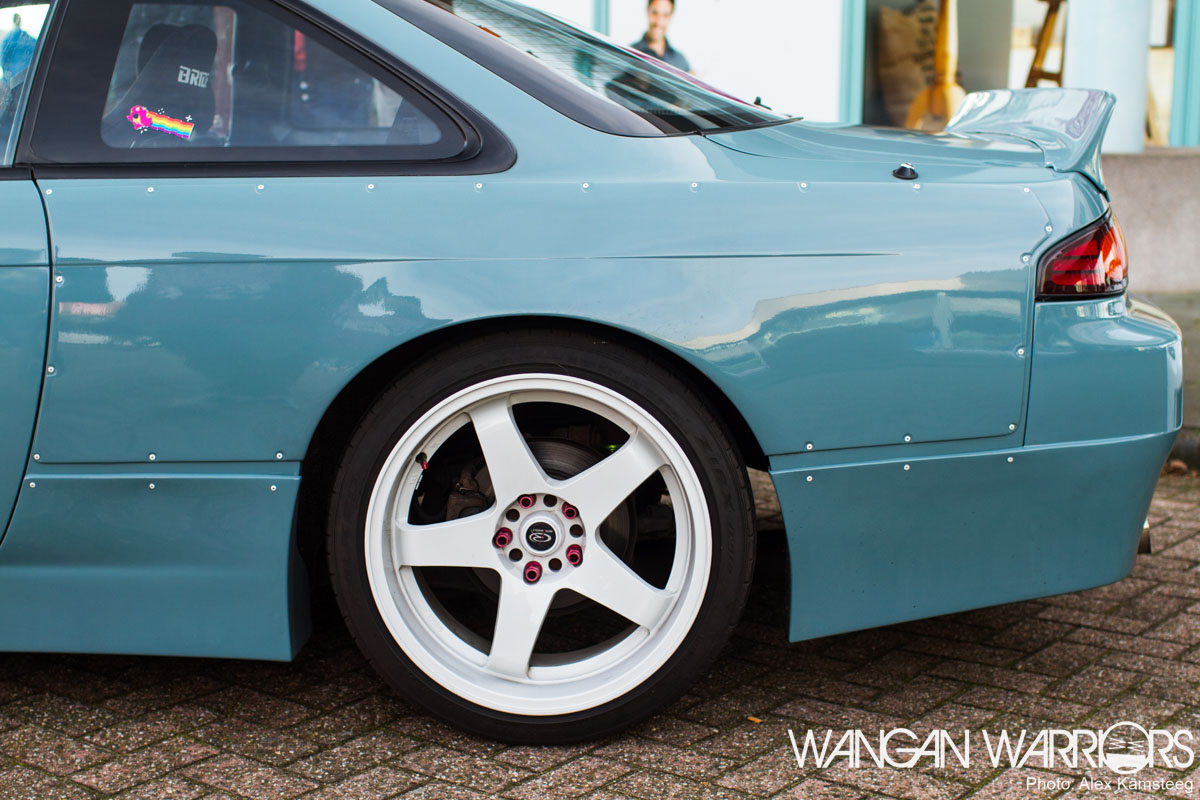 Personally I think that the wide diversity in cars is one of the main attraction of our EoY meet. It doesn’t matter what you like, as long as it’s Japanese you can find it somewhere on the venue. And we don’t put makes and models together, we mix them. So we end up with a meet where a Supra is parked next to a Honda Beat and an multi-coloured Evo next to a classic Celica. 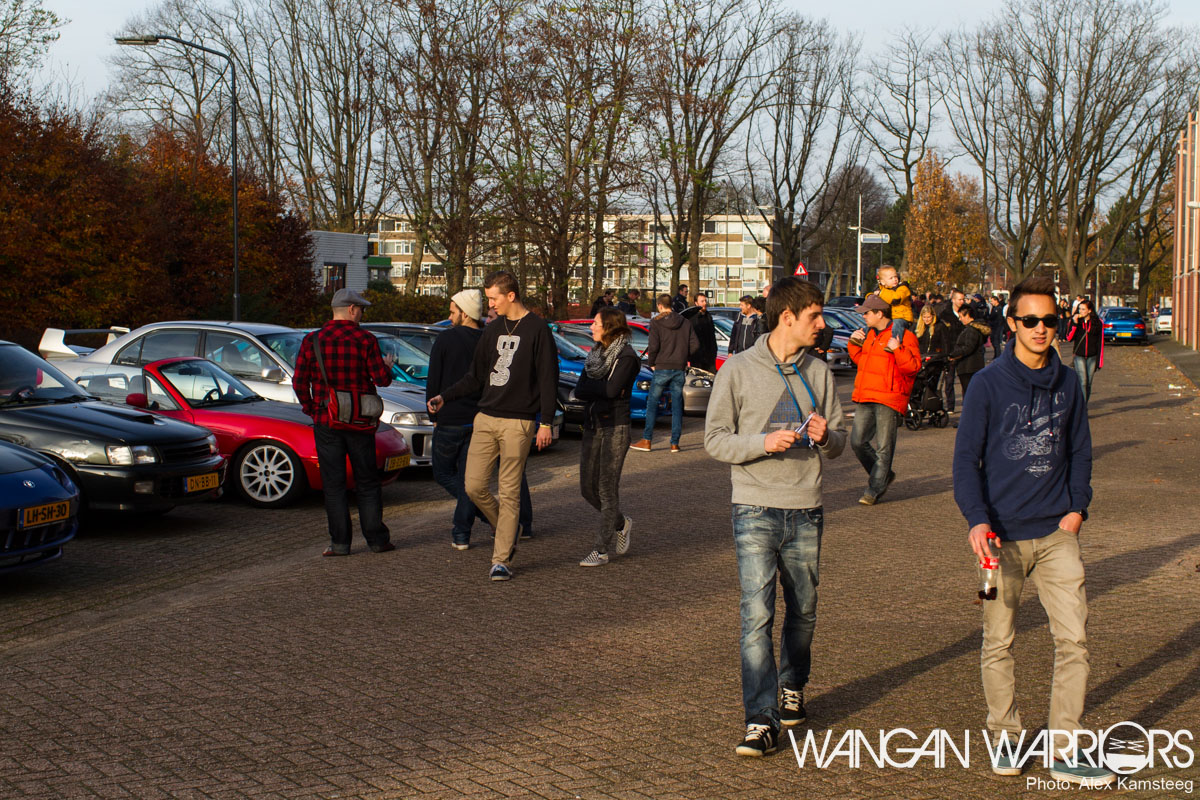 But the cars are just a thing that binds people. As I wrote in the past, meets to me are more about said people than the cars. I saw groups of friends walking around, talking to complete strangers about their cars and meeting up with other people they know. 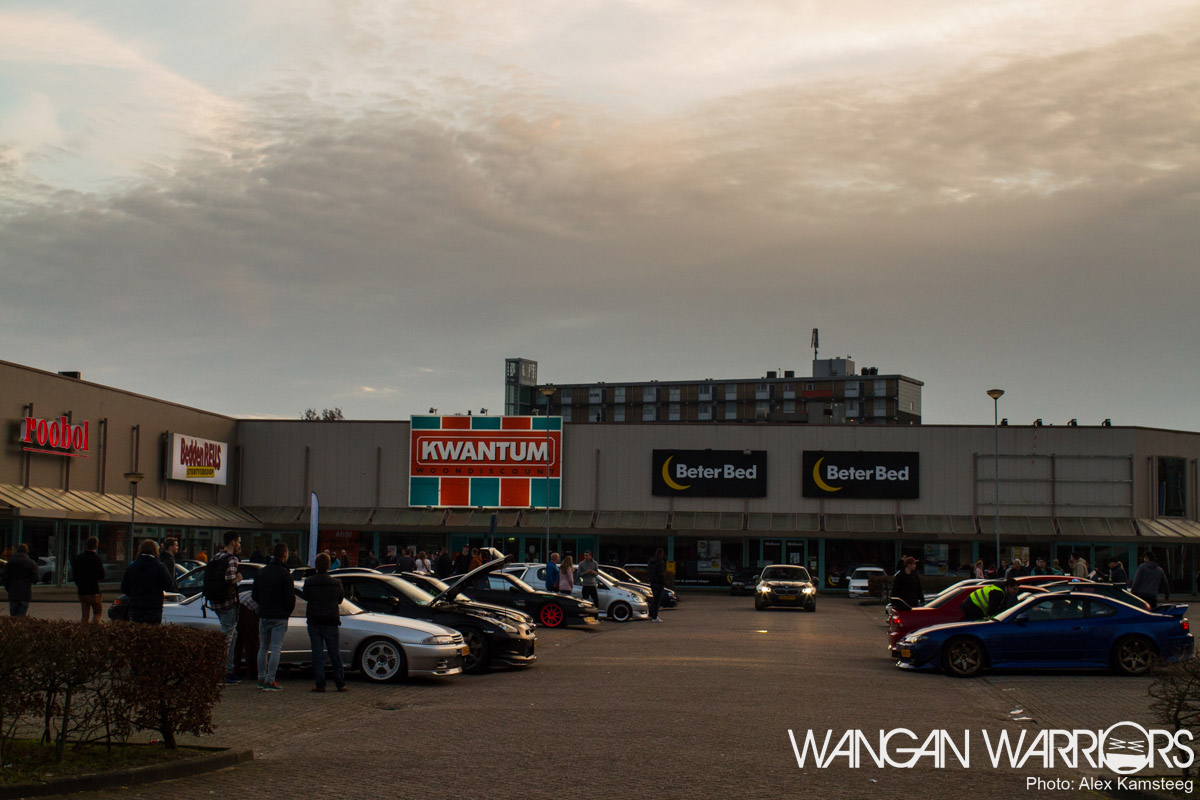 The sun was already setting before the last cars finally left. After we collected all the garbage and helped our friends from Stickerdump pack up their stand we drove home too. In my car, tired but satisfied I started to think about what I would write in this blog. Can we look back at a successful fifth edition? 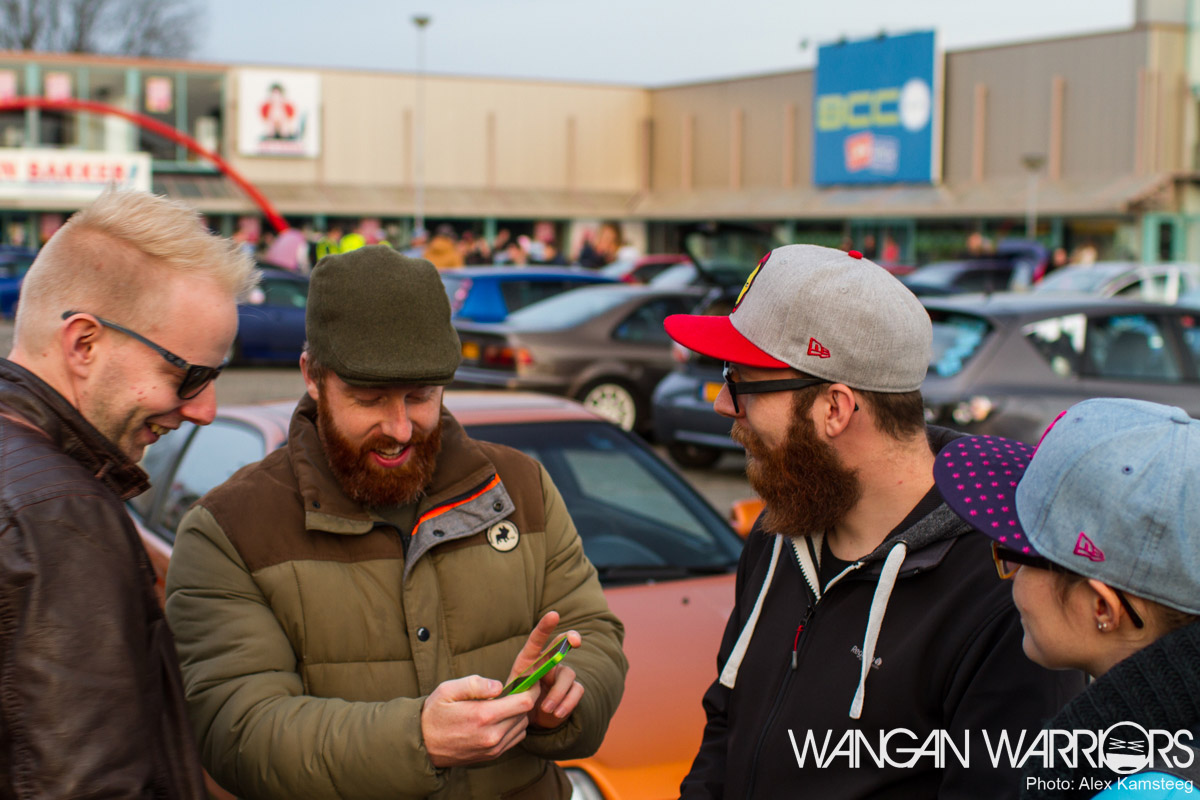 I think that question can be answered in one simple question: Yes. I saw a lot of familiar faces from people who return every year. That large group of regulars is hugely important to us, to me it shows that even after its fifth installment the End of Year meet isn’t just a fad. And I saw a lot of happy faces, of people having fun and who were enjoying the huge number of very diverse cars that showed up. And now, on to the sixth edition!