This post has been very long in the making. Many weeks in fact, with many many rewrites. Why? Because I seem to be unable to write an event report like my fellow bloggers here at Wangan Warriors. Their blogs, like Bill’s articles about King of Europe, read like a complete story. I usually read them at least twice, and I always get the feeling I was there too at an event. 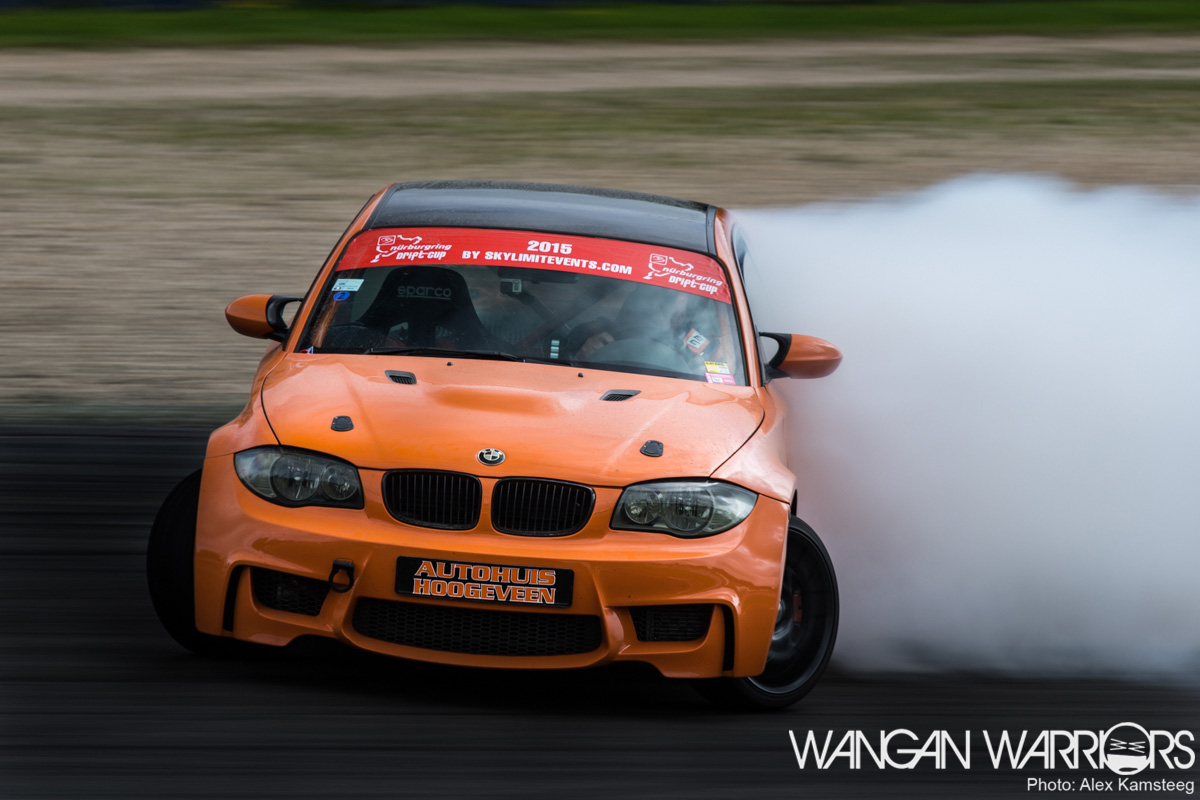 When I’m running around at an event I have no idea what’s happening. Most of the time, at least. Are these the quarter finals? Who qualified first? Not a clue! It’s not that it doesn’t interest me, I just seem to forget those kinds of details as soon a I’ve read or heard them. 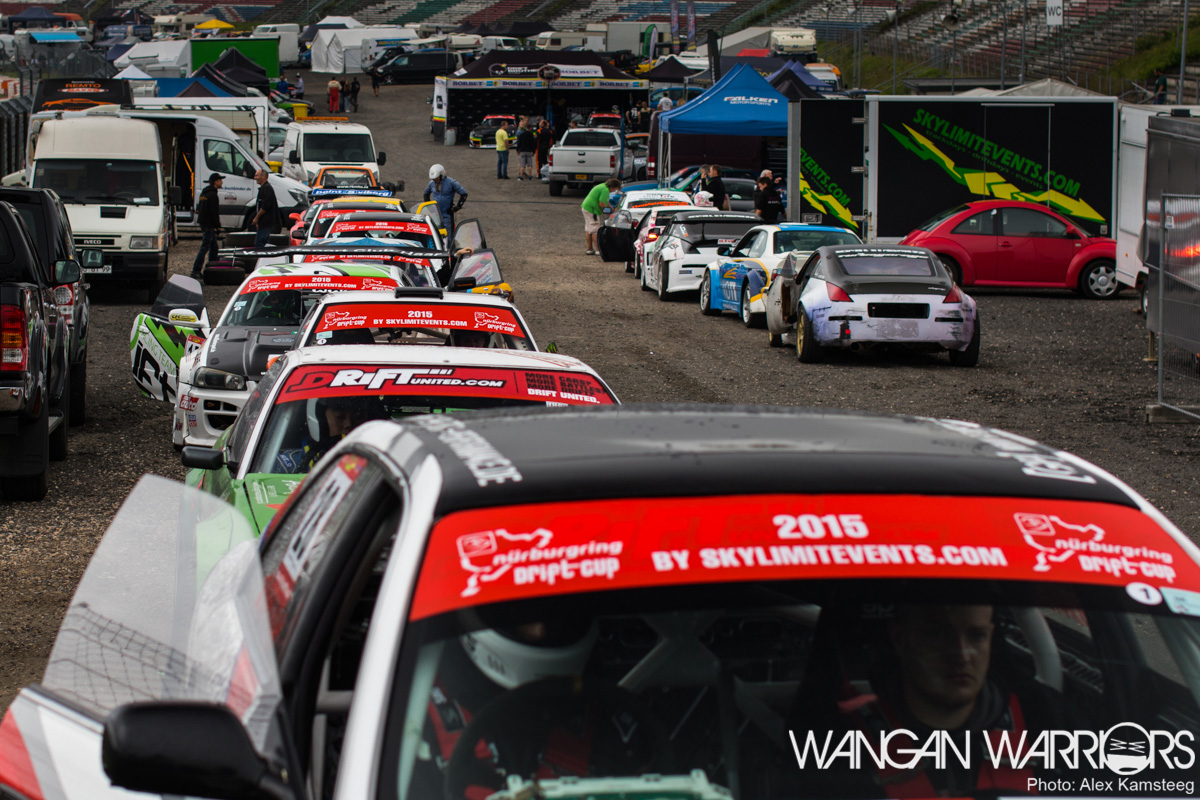 And then I started thinking. Why is that? And does it really matter? When I visited Allard recently just after the second round of the Nürburgring Drift Cup 2015 we were talking about shoots and stuff and then it suddenly clicked. 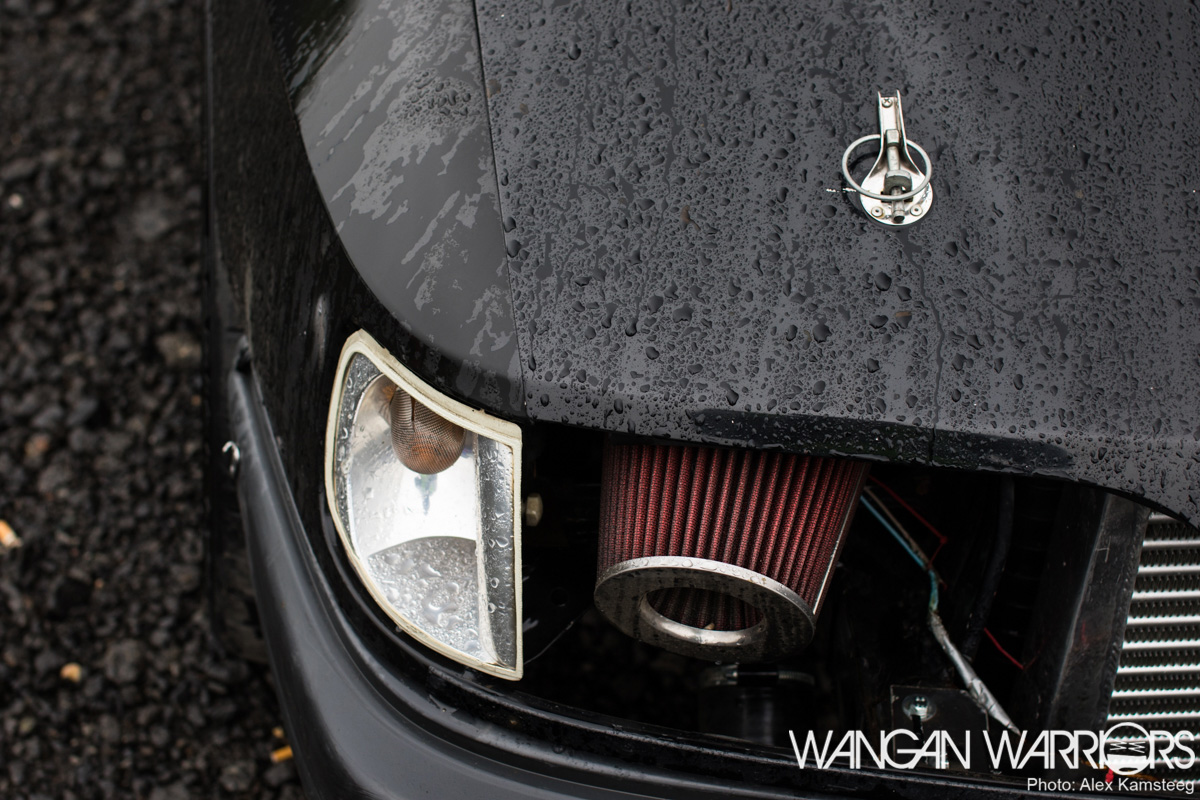 At every event I shoot I’m feel like I’m at work. I’m not hitching passenger rides, although nobody would frown upon that. I’m not coming in late, which again anybody would mind. I try to be as professional as I can, at which I’m hopelessly fail of course. But just like at my day job, which is the best job in the world, I’m having fun. 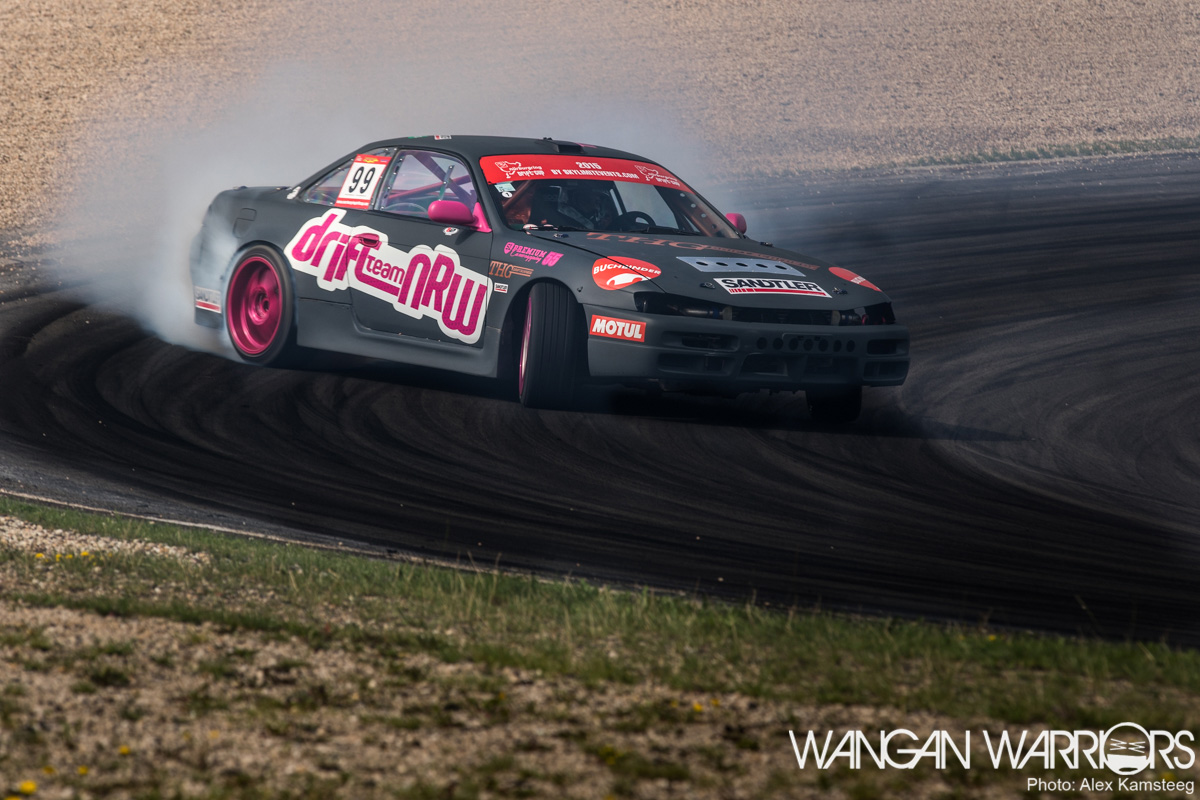 Having fun at the NDC isn’t very hard. To me it seems like the event is centered around it. And not just for the drivers, but for everybody. I’ve hinted at it before, but now I’m feeling even more convinced about it. 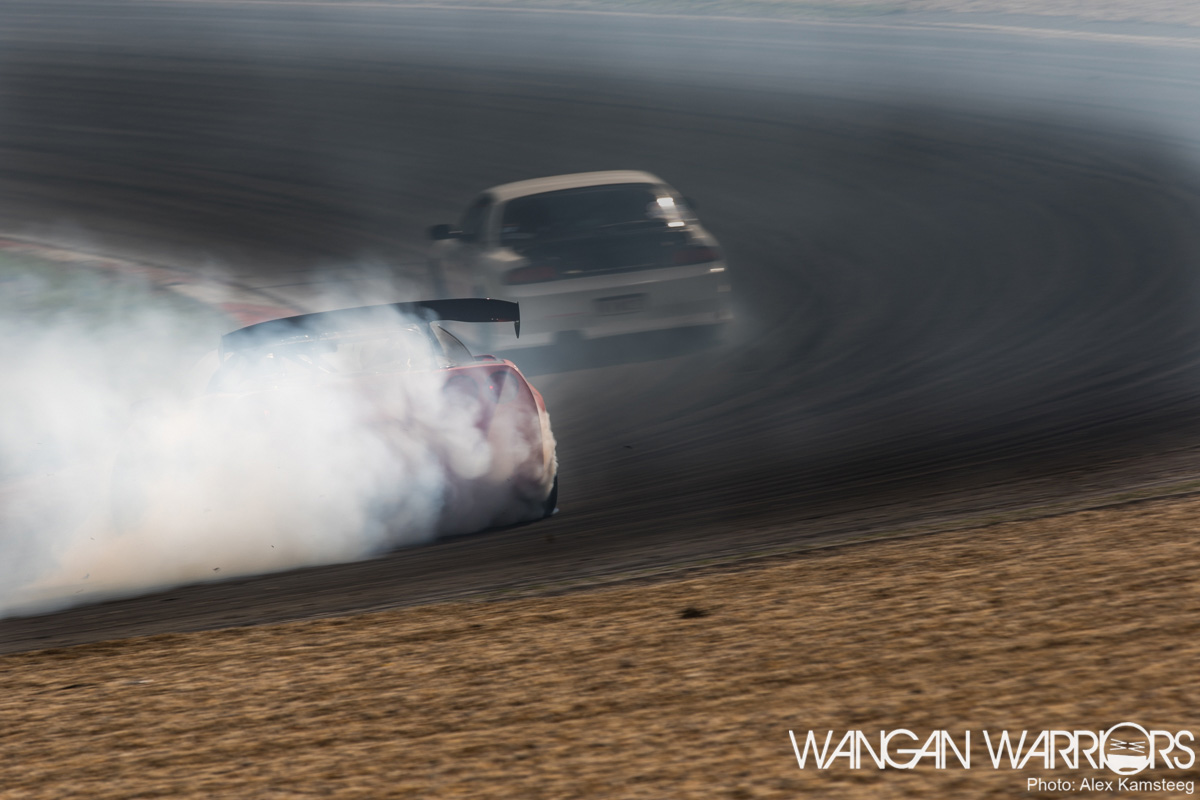 By now the NDC is approaching the end of its second season, with only the finals left for this year. And I think the championship established itself as a place with lots of driving time, exciting battles and a difficult track. A core of regulars has formed, with drivers coming from all over Europe for every round. But besides the familiar cars and faces every time there are a few newcomers. People who want to check out if the enthusiastic stories are true. 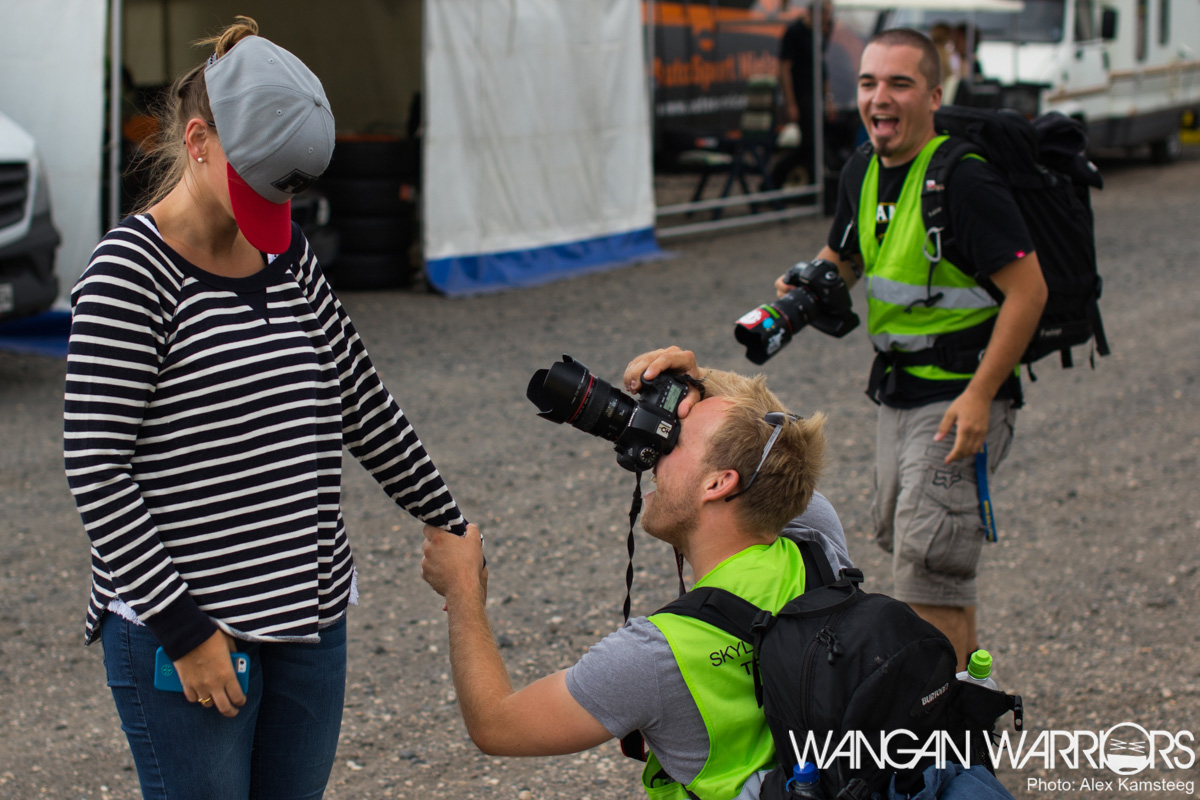 And at the media side we’re quickly becoming one big happy family too. We’re renting accommodations together, we lent each other gear and when we do stupid things the German girls from the organization who are in charge of the media whip us back into line with a stern look. It just works, which is a far cry from some events I’ve been where some photographers are openly hostile to each other or to the organisation. I guess the “spirit of the NDC” has positive effects on the guys and girls with camera’s too. 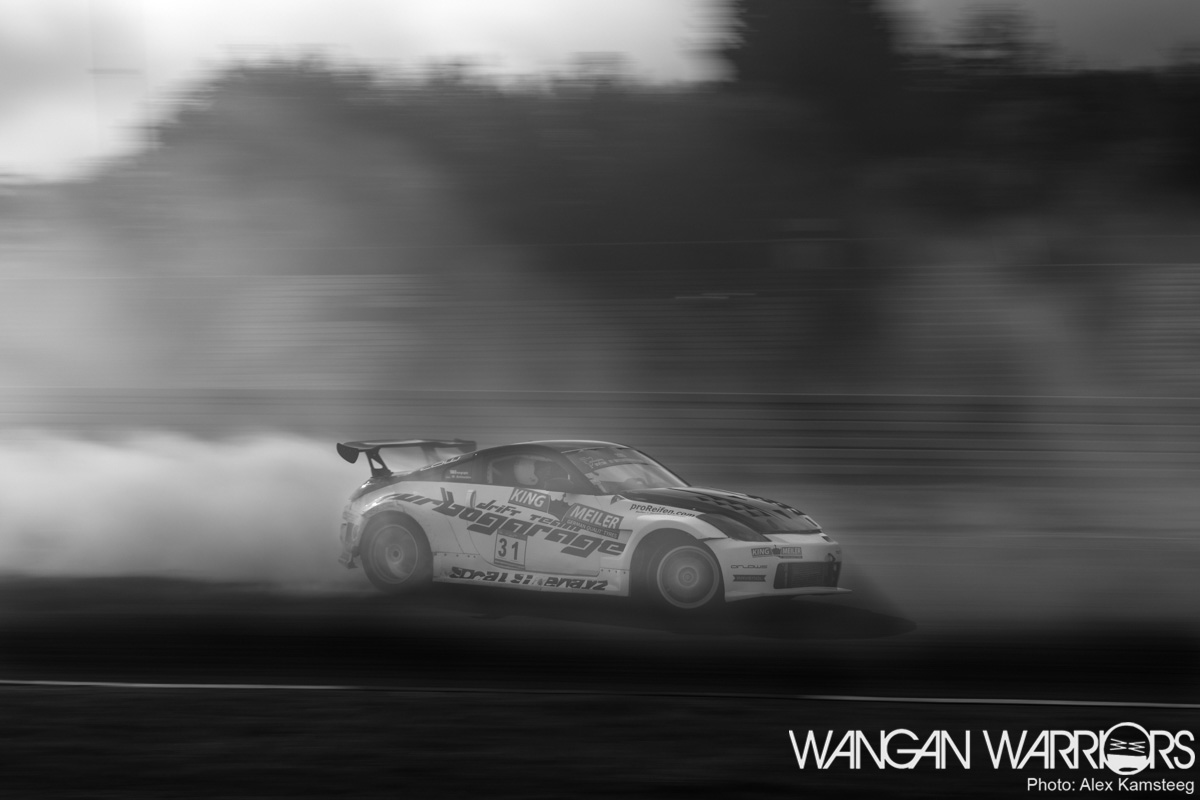 Speaking of camera’s, as a photographer the NDC is just plain awesome. For some reason we have rain, fog, sun and overcast at every event and most of the time some mix of them. The light makes for awesome photo opportunities and the colours of the surroundings change very noticeably with every type of weather. 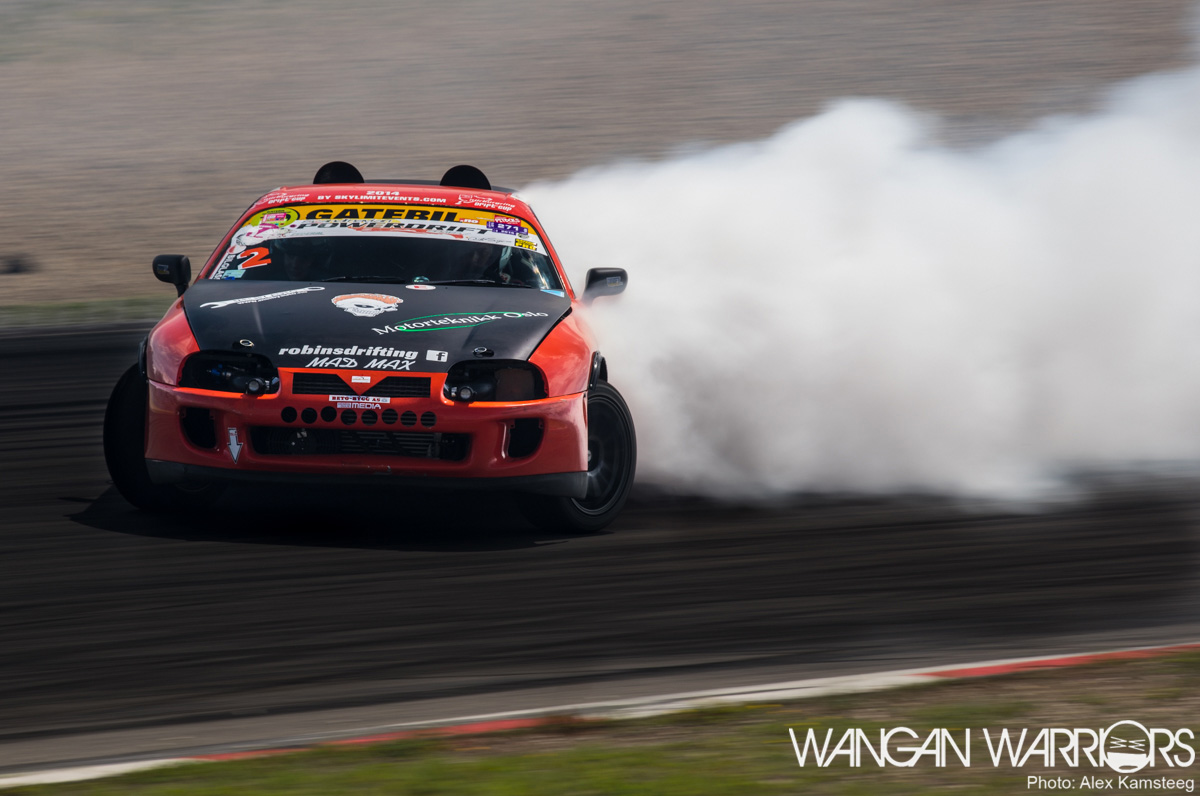 It can be very challenging, from time to time. Sometimes you’re shooting into the light, with no wind and clouds of tyre smoke lingering over the track so dense you barely see the cars. And then, only an hour later the wind picks up, the sun turned a bit and then you shoot completely different pictures. 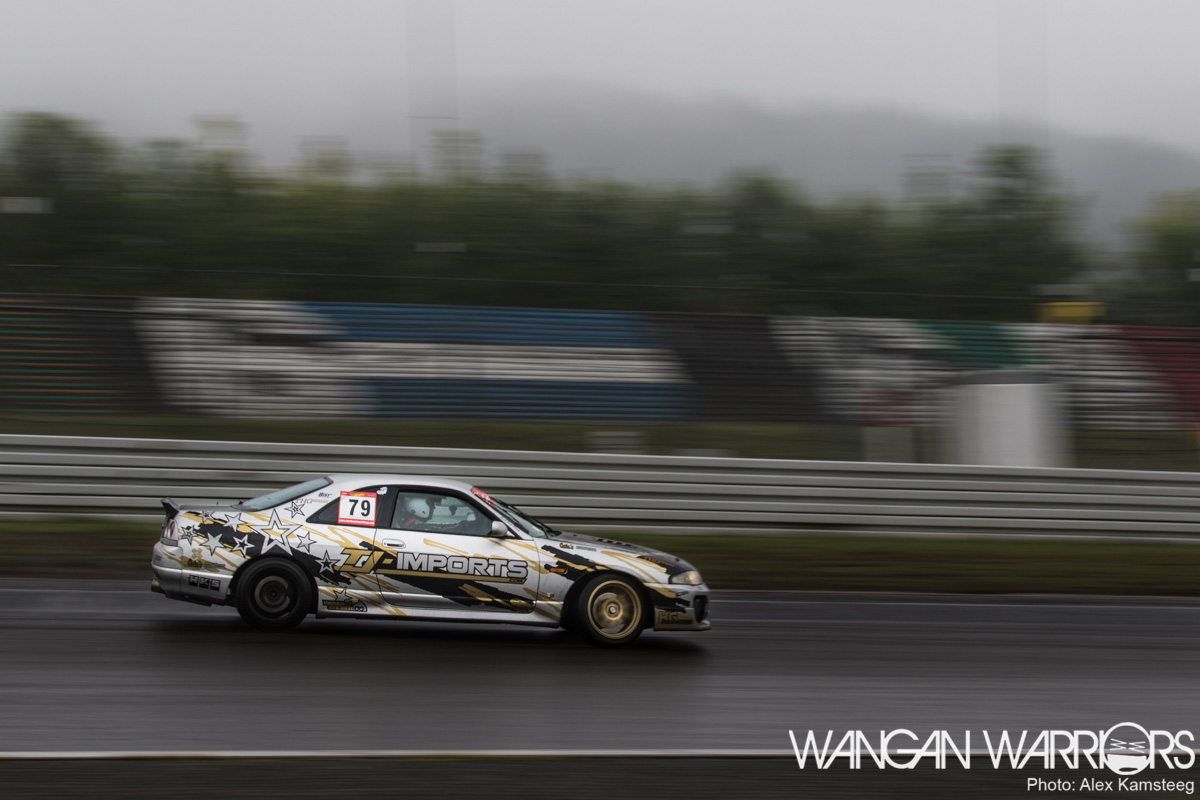 But, before you know it, it will start raining. We had days with dense fog in the morning, bright sunlight and blue sky in the early afternoon with rain showers immediately following. It’s challenging but rewarding for us and the drivers. 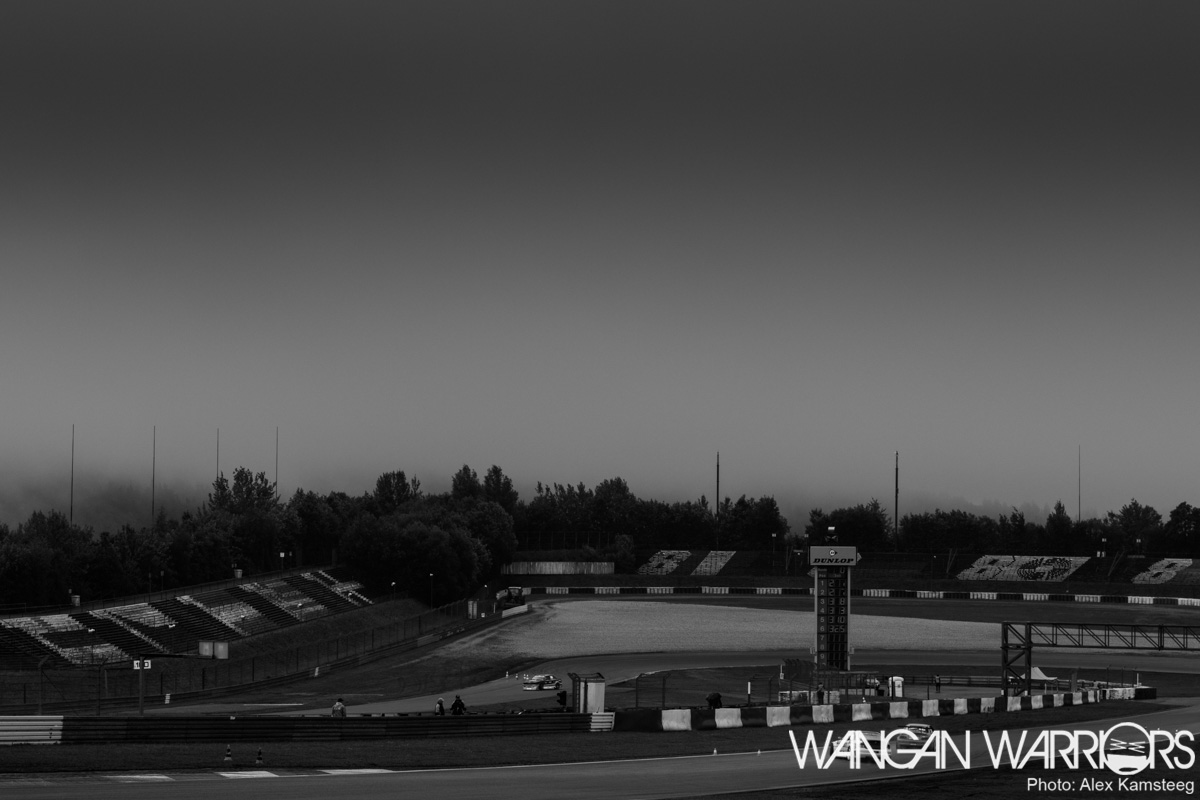 This time, just like a single round last year, the track was reversed. I have written something about the challenges of the normal layout before, but boy, the reverse track is difficult too. Because the first two-thirds are downhill it’s much much faster, with entry speeds in the final corner approaching 200 kilometres per hour. 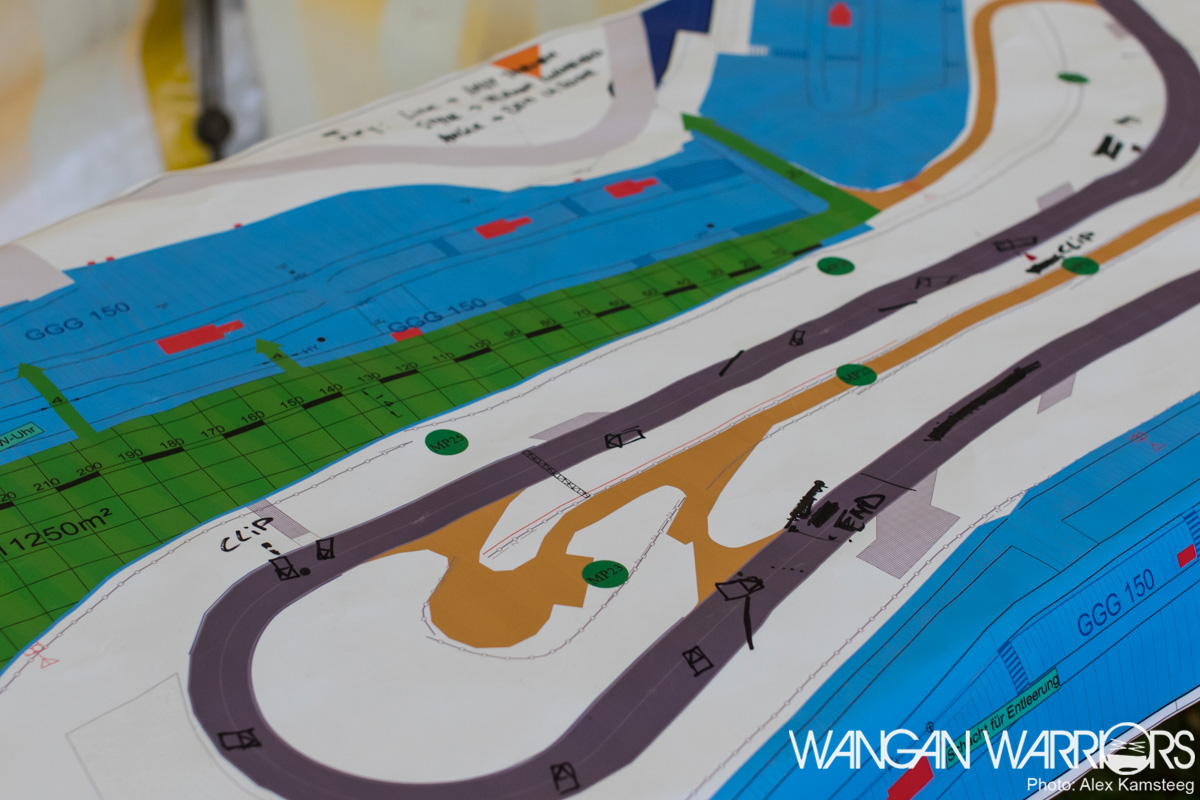 That last corner, the famous Dunlop of the Müllenbachschleife, is banked just right for insane angle while keeping the speed up. However, just before it there’s tight chicane which is one of the judging points. And immediately afterwards, when most cars run out of steam, there’s another clipping point. Thundering towards the cones of the first chicane, losing some speed flicking through it, maintaining momentum and angle through the long Dunlop corner and then changing over for the final clipping point proved very challenging. 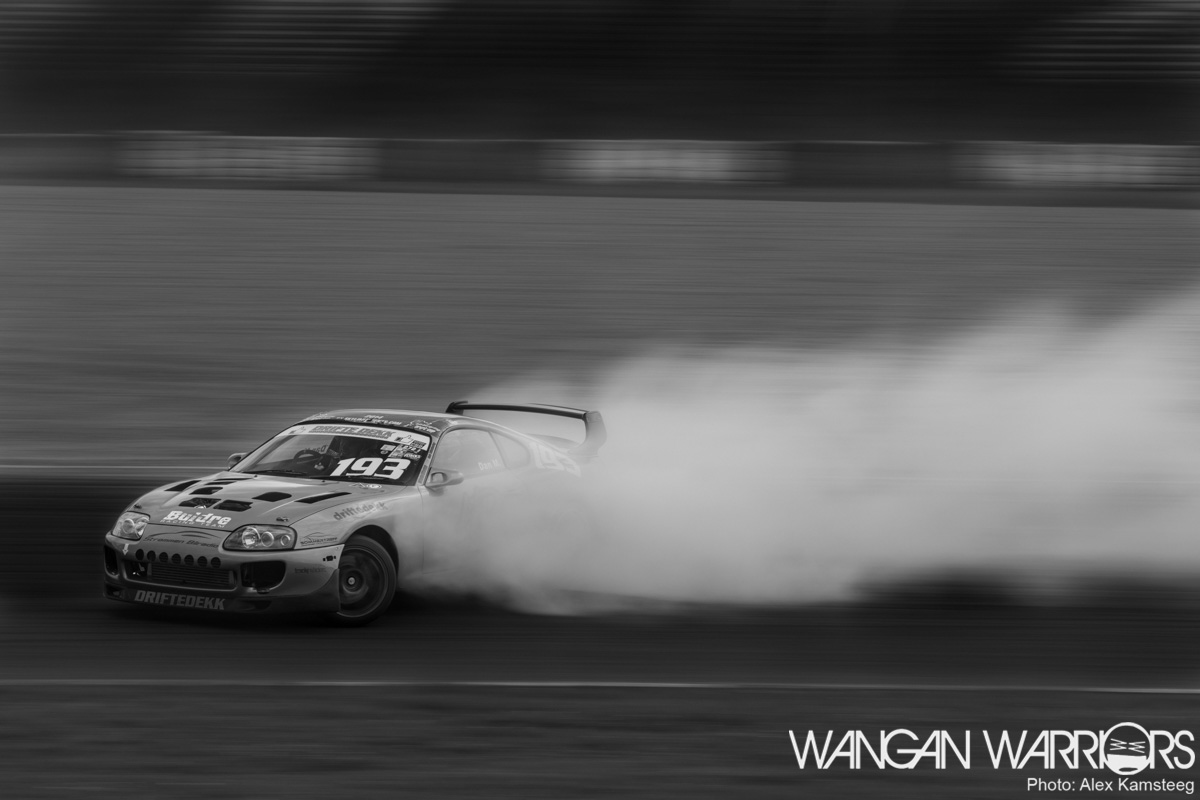 But eventually everyone got the hang of it, with perfect slides through the last half of the track. And when the drivers’ confidence grew, so did the clouds of tyre smoke. Especially the cars with large rear wings had beautiful smoke trails, because the airflow over the wing keeps the smoke down. 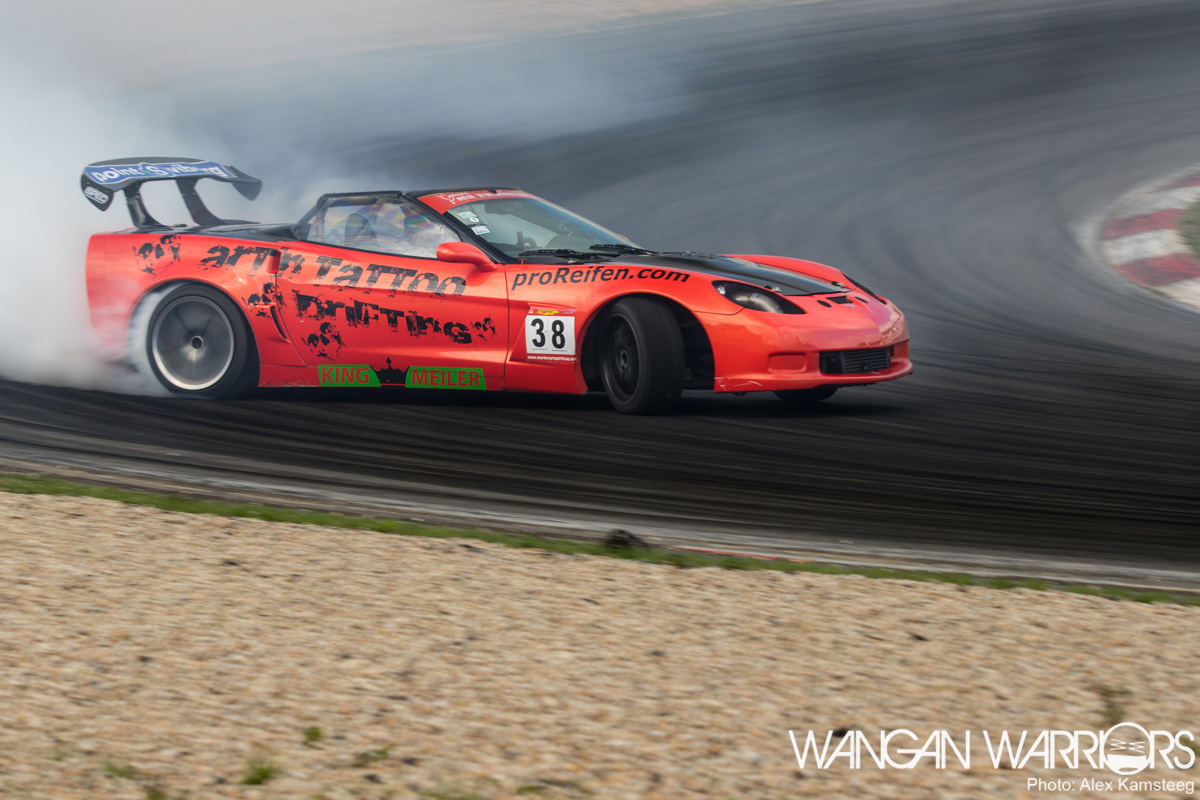 The outside of Dunlop has it’s downsides for us photographers. You can’t see the track from most of it, because of the banking and the huge gravel trap. And getting there is a bit of an acrobatic challenge, with guardrails, catch fences, power utility boxes and other stuff requiring doing physical things my less than athletic body isn’t used to. But it can be a very rewarding place. 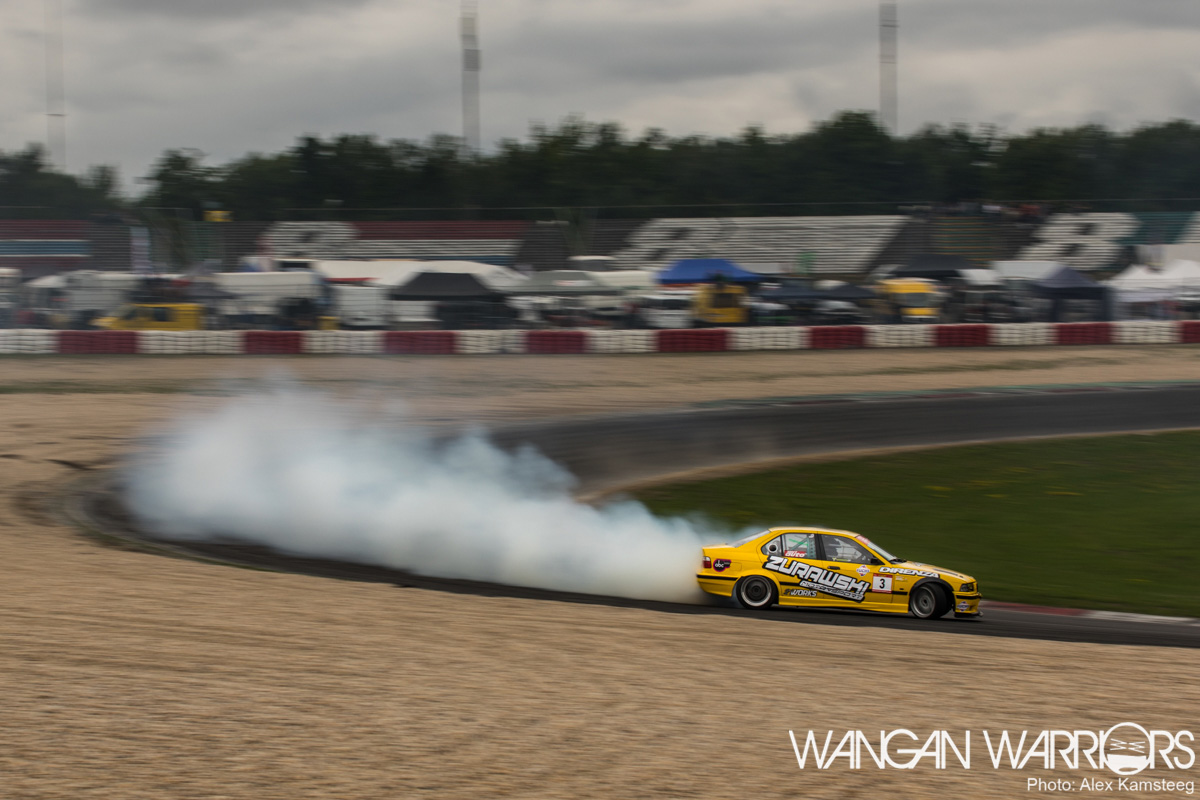 From there you can clearly see the different lines the drivers are taking. Some are going to the inside of the corner immediately after initiating, with a front wheel dipping into the sand and grass, before powering out to the outside of the corner. Others are keeping wide before going to the inside, with a short flick for the final clipping point. 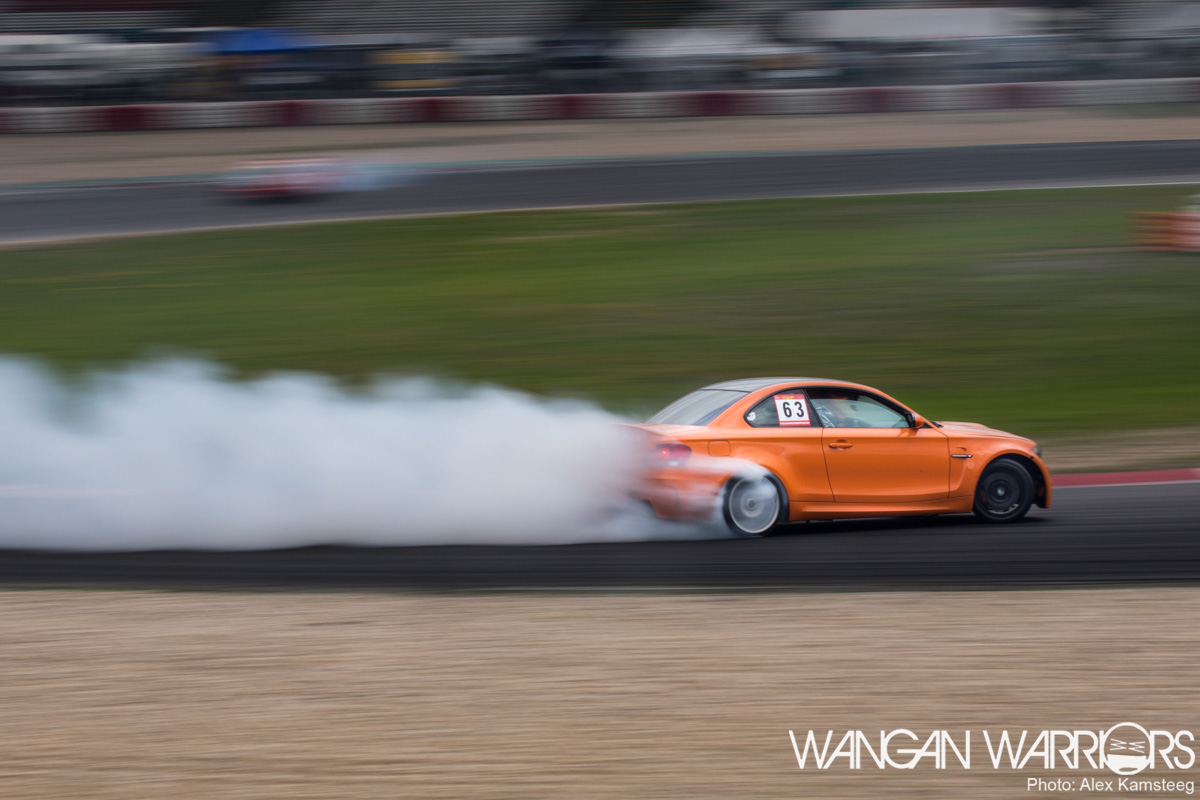 Where the normal track is an equalizer when it comes to horsepower the reverse layout is quite the opposite. Having a decent number of horses under the bonnet certainly helps here. You could clearly see the powerful cars having a much higher exit speed than then their weaker brethren, but in the end it didn’t really matter. 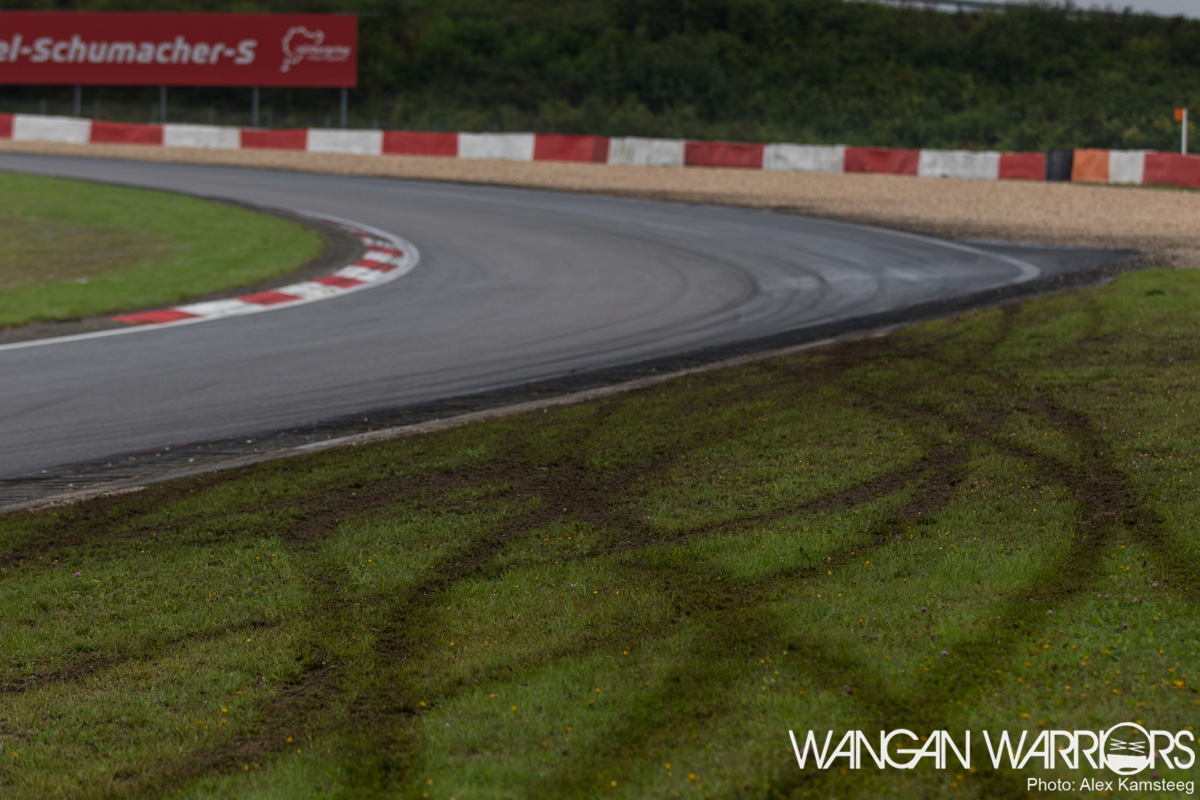 During the battles much was decided in the downhill Schumacher-S at the beginning of the track. Trying to use all the power their car has sent more than one driver spinning or even into the grass or against the guardrails. You weren’t allowed to straighten up in the small section between Schumacher-S and the cones before Dunlop. So the drivers of the powerful cars had to be careful with the throttle in the beginning which meant that aggressive followers could certainly keep up while having only half the horses of the leader sometimes. 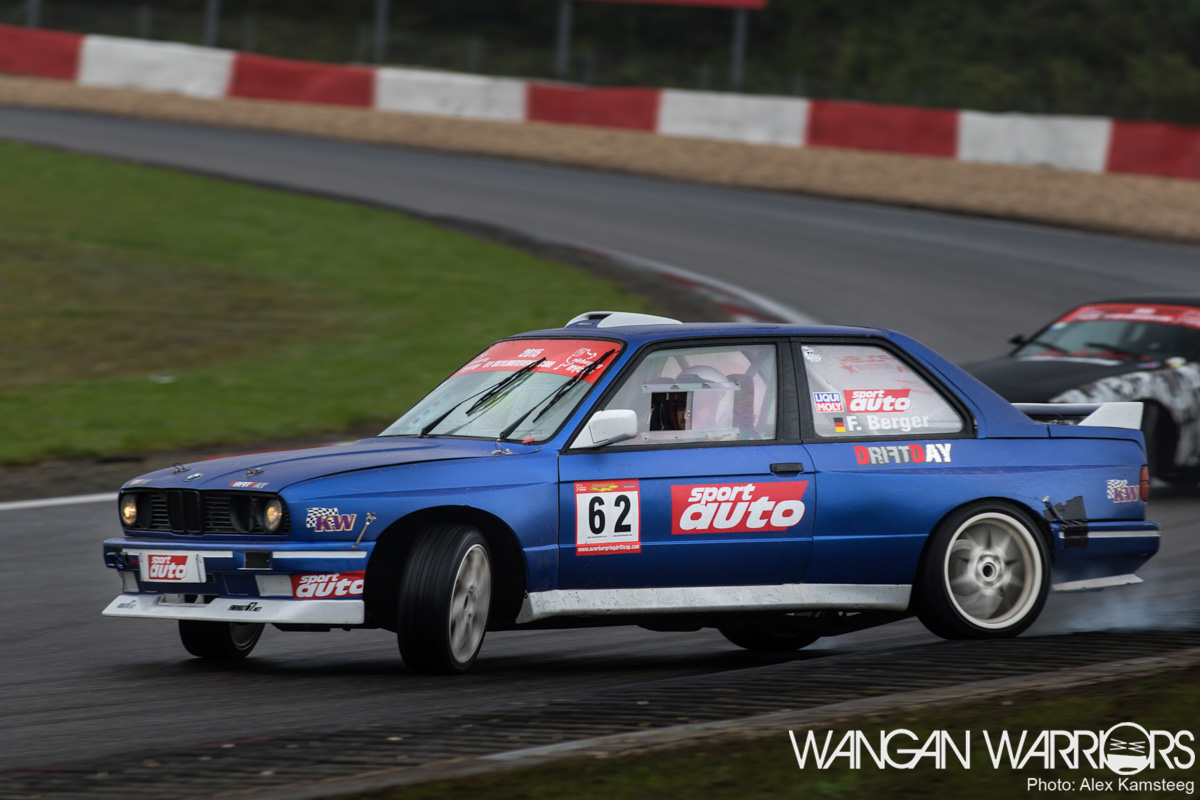 Trying to use a buttload of power to build up speed on the straight was immediately punished. Most drivers who tried had lots of difficulties going cleanly past the cones without messing up their entry into Dunlop. Ultimately the only place where huge gaps opened up between cars would be inside Dunlop, where seasoned drivers with huge engines had less difficulty maintaining momentum. 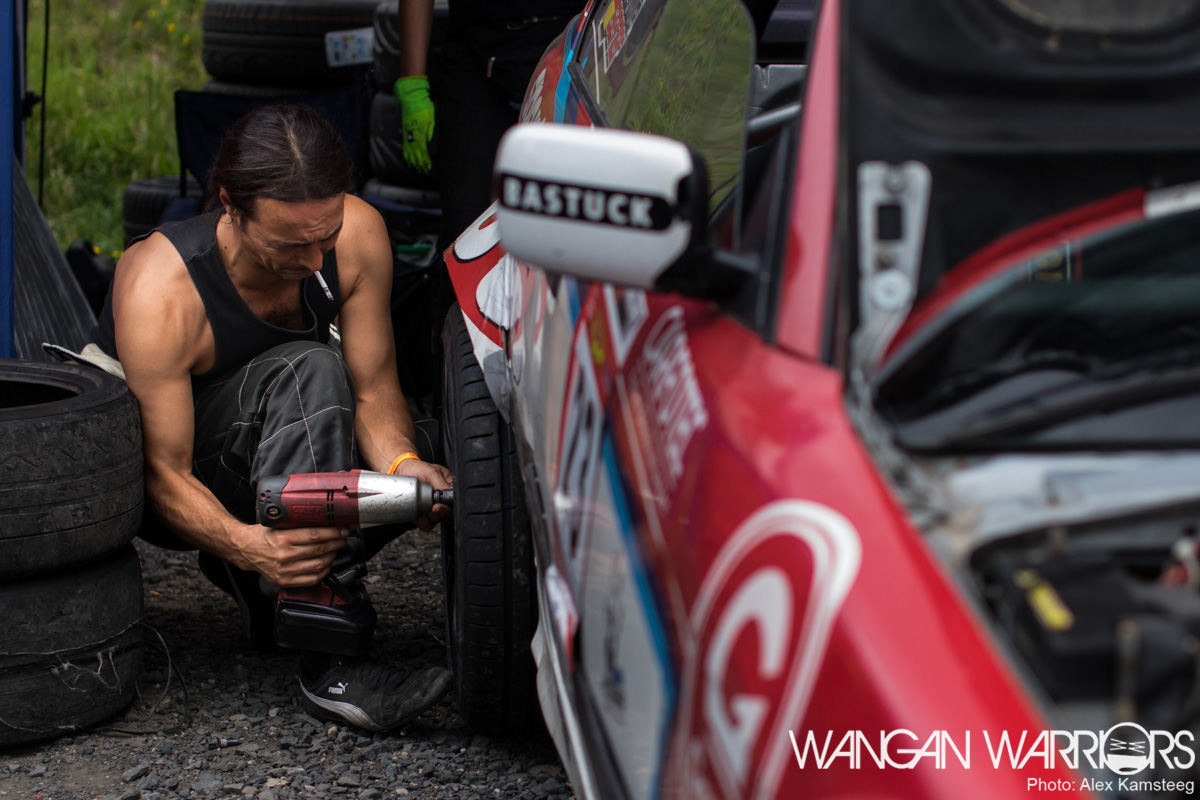 After three days, a mountain of tyres, a few close calls, lots of laughter, rain, sun, more rain, broken gear, sunburns and a lot more it was time to head home. While driving in our little photographer’s convoy through a terrible rainstorm I started thinking about the subject and angle of this post. And now, looking back at what I wrote it’s basically just a little love letter to the NDC. We approached this event from many angles now and I’m still not getting bored. And judging by the sizable group of regular drivers that show up every time, I’m not the only one.

Normally, right about this time of the year the whole motorsport stuff is winding down. The weather is getting worse by the day, like a normal European autumn, people are storing their cars for the winter and with sad faces we await the moment we can take our pride and joy for a drive again. But not this time, I’m already trembling with excitement for the final round of the NDC 2015. I’m ready to have some fun again. And you?